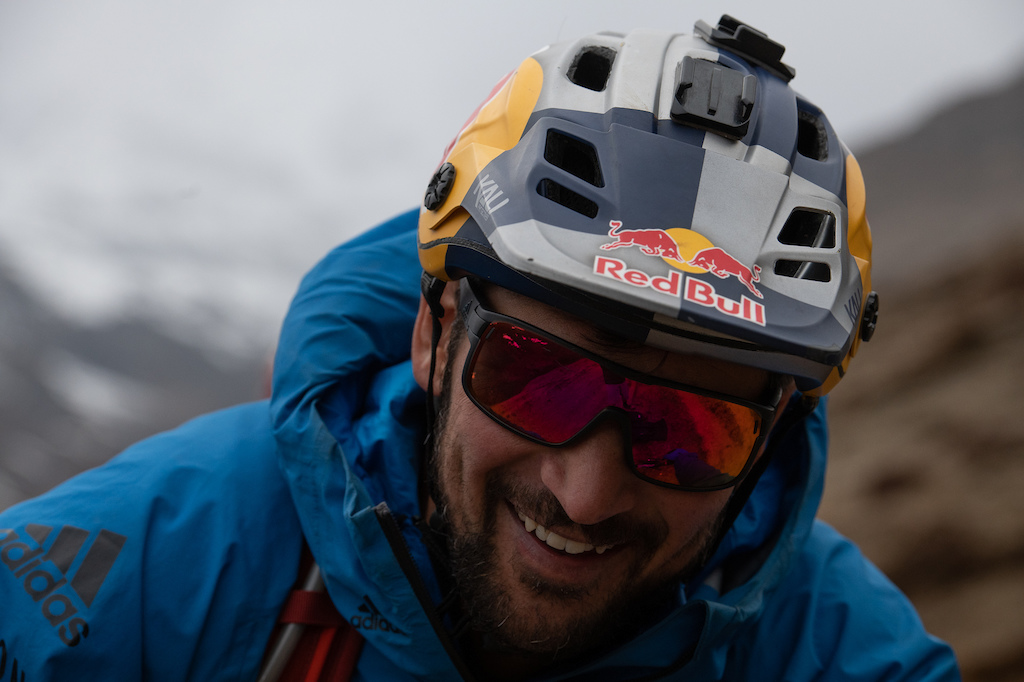 Darren Berrecloth has announced on Instagram that he is hanging up his Red Bull helmet after 15 years of representing the brand at slopestyle and freeride events. He says that this recent parting of ways is simply a new chapter, not a retirement. 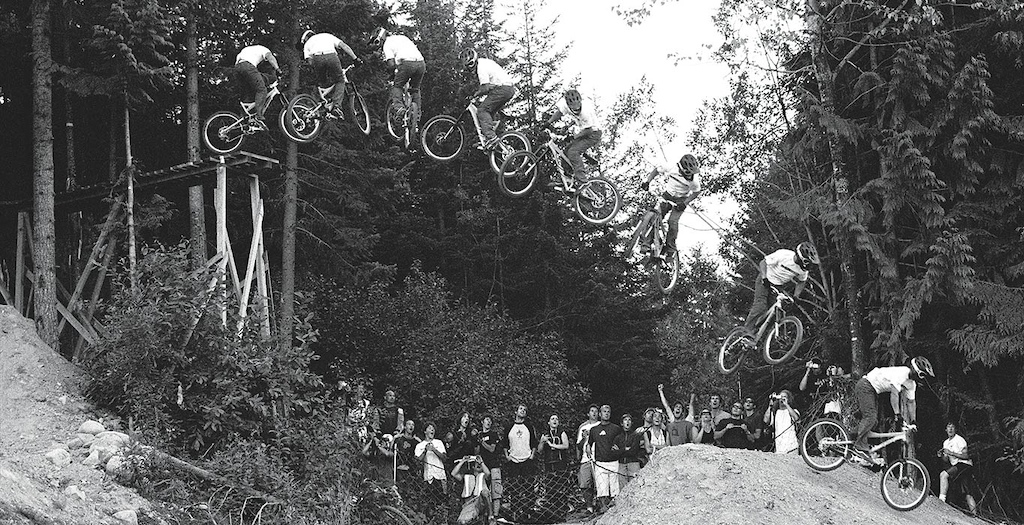 One of the last times we saw The Claw without his Red Bull helmet was during this historic 360 drop at Crankworx, 2005.

The Claw announced his retirement from freeride competition in October of 2018, but has remained active in the cycling industry, commentating at events and working on film projects. He also announced that he will be bringing back the Bearclaw Invitational in 2022.

The Claw was inducted into the Mountain Bike Hall of Fame earlier this year.

imac965 (Jan 19, 2022 at 16:41)
@initforthedonuts: how else is @notoutsideceo supposed to afford the new DT Swiss contraption for his down-country gravel rig?!

DDoc (Jan 20, 2022 at 4:15)
I think you should change your company logo to O+ and start a line of goggles. Then make a bunch of videos of riders putting their O+ googles on in super-slo-mo.

Mfro (Jan 19, 2022 at 15:00)
Ok, so Minnaar, Bearclaw and Sam Hill have all recently mentioned their departure from their previous helmet / goggle providers, all with the same format:

"Sad to be going, new chapter, previous bunch were great, love you, onwards and upwards etc".

Can't help but feel there will be some super-duper announcement about a new player in the market dropping imminently for all of the legends of the sport....


Or is my paranoia back from Xmas break?

todayisthegreatest (Jan 19, 2022 at 16:06)
@GZMS: heard somewhere that they will only sponsor a couple of athletes per country for a specific part of the sport like downhill racing or freeride. maybe making room for current riders who are pushing the sport

BiNARYBiKE (Jan 19, 2022 at 16:10)
@GZMS: I don't see any evidence of that, but I do seem Berrecloth with a declining presence in the sport. Not throwing any shade at him, he's a legend. But everyone fades from the forefront at some point and sponsors aren't going to pay athletes indefinitely.

sino428 (Jan 19, 2022 at 16:24)
@GZMS: I wouldn’t think so. They are still adding new athletes all the time. They can only sponsor so many people. If they want to sign new talent some of the older athletes are eventually going to be pushed out.

vonroder77 (Jan 19, 2022 at 17:32)
@calmWAKI: Your first two helmets will only protect your head at 75% for the first six months, after that you will need a third helmet followed by a fourth helmet, while in Quebec you must show proof of your helmet to buy weed and liquor.

humoroususername (Jan 20, 2022 at 3:27)
@vonroder77: the last time I showed my helmet in Quebec when I tried to buy liquor I ended up getting arrested! I wish those guys would make up their mind!

sino428 (Jan 21, 2022 at 10:29)
@anotherstoneinthewoods: Redbull doesn't make helmets. The "Red Bull Helmet" is just the traditional way that Red Bull athletes display the Red Bull logo. They are just Red Bull painted versions of whatever helmet each individual rider wears. For example Loci Bruni is sponsored by 100%. His helmet is just a 100% helmet painted with the Redbull logo. Tahnee Seagrave's Redbull helmet is a just a painted Fox Helmet. Gee and Rachel's helmets are repainted Bell helmets. Because those are the riders actual helmet sponsors.

brightonaintready (Jan 19, 2022 at 17:38)
Redbull has taken a hard hit year this year, Lost Sandoval on their BMX team, and Pastrana dropped his RB helmet on the moto side after all these years. Wonder whats going on behind closed doors

sino428 (Jan 19, 2022 at 20:33)
I doubt Red Bull ‘lost’ these guys. Redbull is pretty much considered the gold standard of action sports sponsorships. There’s no way to know for sure but I’d assume most of the time it’s Redbull dropping these guys. As great as guys like Berrecloth and Pastrana are/were they are past their primes. Redbull can’t sponsor everyone forever.

spaced (Jan 20, 2022 at 1:24)
@gilby82: his contract was also more expensive than Gwin or Claw. So it's not just are you doing enough to justify the helmet but also the price

BennyOC (Jan 20, 2022 at 2:00)
@gilby82: Yeah, I agree Pastrana is still prime-time but he's made his money (net worth is now well over $25m) so he's now at a point in his career where he can use his profile/wisdom to partner with brands he really wants to work with. Black Rifle Coffee Co seems a legit brand to move to.

x-rider (Jan 20, 2022 at 5:41)
@h82crash: This is still pocket money for Red Bull, so it is simply the presence that counts and the reach that you can get out of any sponsorship. If the athlete you sponsor has vanished in front of the public, than the value isn't there anymore. Clearly Red Bull could keep them when their prime is done, but it is not like this in sport sponsoring.
Even legends of a decade / generation and sport tend to become less relevant at a certain time in their career.
All these Insta bitches are killing our heros ; ) Sad but true.

I wish all the best to the Claw and we will be looking out for what ever he is willing to share with us.

adrennan (Jan 20, 2022 at 6:37)
I mean didn't pastrana drop red bull to rock nitro circus branding, which is like his company... kinda makes sense

sino428 (Jan 20, 2022 at 10:30)
@gilby82: Yea I didn't mean to suggest that a guy like Pastrana is not relevant anymore, but like with any contract/sponsorship deal there is a price to benefit ratio that a company needs to weigh out. Pastrana was clearly one of their top (and likely highest paid) athletes for a long time. His contract was probably up and Redbull most likely wasn't willing to keep paying him like that. The value of having sponsoring Pastrana at this point is likely higher for his new sponsor than it is for Redbull so they let him walk. Its not that Redbull is "dropping" these guys, its more that the partnerships don't make as much sense as these guys get older.

Zarma (Jan 20, 2022 at 0:18)
One picture at least of The Claw should be in every book that treat about Canada, for our MTB planet he's so representative of the state of mind of this part of the world...
A kind of new cliché: woodsman / mapple syrup / The Claw

bkfsr2 (Jan 19, 2022 at 16:13)
Black Rifle coffee company just picked up Travis Pastrana as he doesn’t wear a RedBull helmet anymore either. Maybe they’re working on being the next big player in action sports?

scott-townes (Jan 20, 2022 at 2:36) (Below Threshold)
@dualsuspensiondave: Coming from a liberal, you're an idiot blinded by your political tribalism. Black Rifle is an incredible company that was not only founded by veterans but supports hundreds of other veterans including refugees from Afghanistan with great pay, housing, profit sharing programs, etc. Also their coffee is pretty decent.

scott-townes (Jan 20, 2022 at 6:25)
@dualsuspensiondave: Hahahaha, oh really? Please show me where the company supported the insurrection.

dualsuspensiondave (Jan 20, 2022 at 10:21)
@scott-townes: Go ahead and look at the video footage from the attempted insurrection and tell me how many Black Rifle shirts you see there.

scott-townes (Jan 20, 2022 at 10:50)
@dualsuspensiondave: Ah, so they didn't actually support the insurrection. You just assume they did because a few people who participated were wearing merch anyone can buy. Well case closed then. With that logic, you have to also conclude that Carhartt, Nike, Wal-Mart, Bern helmets, Oakley goggles and Segway scooters were all supporters of the insurrection because people were using their gear as well.

Your level of ignorance and lack of self awareness is on par with hard-core Trump supporters. People like you who blindly fall to political tribalism instead of using common sense are the problem.

antihero (Jan 20, 2022 at 16:37)
Black rifle is apparently has market valuation of 1.7 Billion $ which seems crazy to me so maybe they are planning to throw some of that money around. however i don't think that they will ever have anything close to the market that redbull or monster has so being big player in action sports seems unlikely. i mean it is just decent coffee with guns on the package

scott-townes (Jan 20, 2022 at 19:16)
@antihero: They do good things, they don't need to throw money around to attract reps. Legendary athletes like Pastrana don't need top dollar contracts so they start working with the companies they want to rep. Do people think Pit Viper is paying Pastrana more than what other larger eyewear companies can? No, he's with them because they embody the attitude and culture so many of us grew up with and got us into action sports. Not these BS executive board run corporation with shareholder interests at stake.

Black Rifle is a U.S. based company that supports U.S. vets who are constantly turned away from good jobs they are overqualified for, battlefield medics and trauma nurses for example, simply because of prejudices people have against them, assuming they have PTSD severe enough to where they will go nuts one day. This is why people like Pastrana are attracted to their brand. The CEO has been outspoken, saying the extremists are not his customers. He wants nothing to do with them.

It sucks political tribalism has gotten so bad in the U.S. that you see people on bike forums ripping good companies for stupid, baseless reasons. Companies that are doing good things like providing vets jobs and giving refugees of the Afghanistan war a new lease on life. As a company, they're doing a lot more than a lot of liberal and conservative politicians. And their coffee is decent. Not as good as Colombian but nothing is as good as that.

dualsuspensiondave (Jan 22, 2022 at 11:36)
@scott-townes: Nah, they’re still Trumpsters themselves after the fact.

scott-townes (Jan 23, 2022 at 5:39)
@dualsuspensiondave: Nah, you just got called out on your blatant idiocy. Keep being tribal, brah. Suits you well.

jamesbrant (Jan 19, 2022 at 18:09)
it's gotta be tough eating your cheerios every day with RB for that many years. gotta be refreshing to be out from under the corporate monolith.

konafarker (Jan 19, 2022 at 19:35)
Wow! Thank you for all the inspirational riding and in being such a role model For the sport… it’s a loss for Redbull imho

bombdabass (Jan 20, 2022 at 6:43)
Way too much over analysis. He retired from the limelight so therefore his bonz isnt going to be visible so Red Bull dont think it offers enough exposure to fund. Its just business.

Theysayivebeentheone (Jan 19, 2022 at 15:53)
Greg Watts announced his departure from rockstar a couple days ago n The Claw.. damn they’re dropping the legends smh

tim-from-pa (Jan 20, 2022 at 5:03)
I'm not sure this has anything to do with retirement from events or riding professionally. There are athletes that are still listed on the redbull athletes page who are retired and hardly even active in their sports anymore. My guess is he personally doesn't want the sponsorship anymore.

DGWW (Jan 21, 2022 at 9:14)
Does a person really decide not to continue to take a paycheque from Redbull ? Or has Redbull decided not to keep him on the payroll ?

MrDuck (Jan 19, 2022 at 16:48)
@dh-bomber I never had that impression until I actually spoke with him. So I think yer right. And bought the best chainguide ever that's still on my bike haha.

Tigergoosebumps (Jan 20, 2022 at 14:32)
I hope he gets free "BC" doughnuts from his local shop due to his supreme mtb ultra-lordness