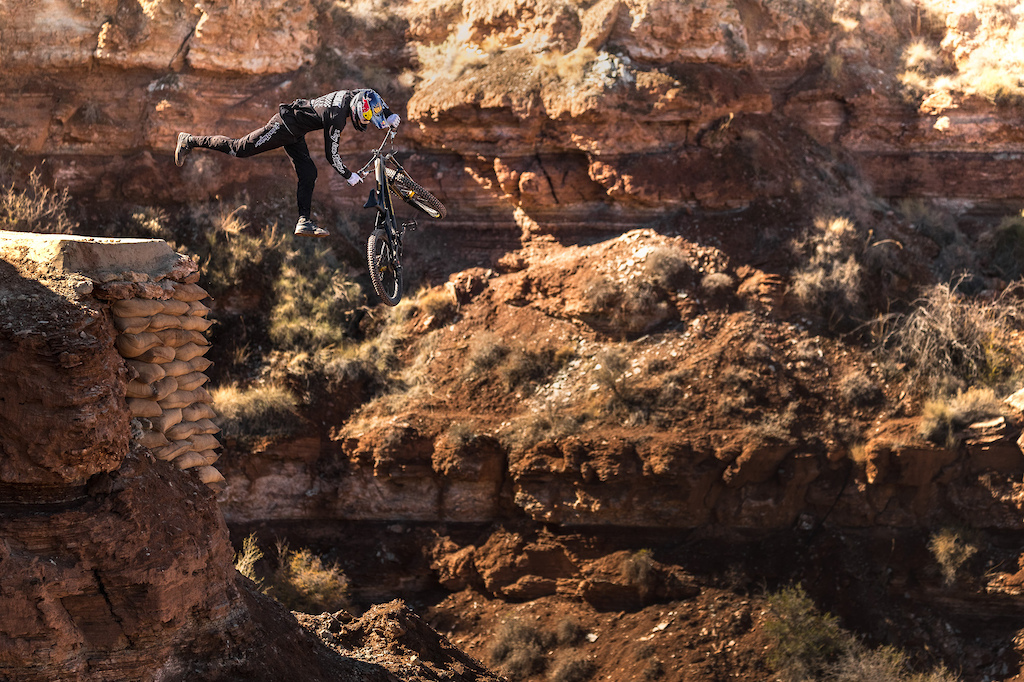 Red Bull has announced that the 2022 edition of Red Bull Rampage will take place on October 21, 2022. They've also confirmed that there will be 18 mountain bike athletes descending upon the steep desert landscape of Southwest Utah, compared to 15 that were invited last year.

The contest format will remain unchanged for 2022 with riders and their crews having four days to build their lines followed by a rest day, and then four practice days, before the big showdown.

One major change for viewers at home is that this year the event will be streamed live exclusively on ESPN+ in the U.S., and on Red Bull TV in all other countries. However, the complete event will be available on-demand on both ESPN+ and Red Bull TV in all countries following the competition. On October 30th, viewers can also tune-in to a condensed 2.5-hour replay that will air on ESPN.

For fans looking to attend the event in-person, tickets will go on-sale via the Red Bull Rampage website at a later date, to be confirmed.

plustiresaintdead (Aug 11, 2022 at 9:27)
Discovery takes over rampage in 2023. The start list has been cut to just Brandon Semenuk and only bikes with internal headset routing are allowed to enter.

grumbly (Aug 11, 2022 at 9:40)
Don't forget the new "Rampage Short Track Cross County Race" and the mass start 60 mile gravel centry round from Lifestyle. Super excited about those. I hear the vendor list for the product village is going to be lit!

wolftwenty1 (Aug 11, 2022 at 9:28)
With these big corporations taking over the athletes will finally be paid a living wage right? Right...?

scott-townes (Aug 11, 2022 at 10:25)
Athletes already worked out things a few Rampages back but who knows if they have a say in prize money still. Thank god for prize-matching sponsorships.

twonsarelli (Aug 11, 2022 at 11:27)
i know that's rhetorical but i don't think they're employees of those companies but hopefully the athlete contracts will continue to grow as exposure for those brands increases. also, does anyone know how many athletes are employees for rather than contractors? would be curious to know how many of them are getting company-sponsored health plans, 401k, etc

iamsx (Aug 11, 2022 at 13:52) (Below Threshold)
I honestly don't understand the "living wage" criticism regarding prize money. There are probably hundreds of riders who would kill for the opportunity to ride in Rampage for free. It is in Red Bull's best interest to create a competition where the world's best riders want to ride, or at least where the sponsors of the best riders want to ride. Prize money is only one part of that equation. As far as I know, all of these riders are free to refuse to ride if the risk is not worth the reward. If not then we have some serious human rights violations going on, and I don't think that's the case.

iamsx (Aug 11, 2022 at 16:08) (Below Threshold)
@MT36: I 100% agree that the riders work hard and provide a real benefit to the companies sponsoring them and the competition. But they do not have a "right" to make money doing this. I would love to make a living riding bikes, too, but no one is willing to pay me to do that. The riders are voluntarily accepting a deal which each sponsor has presented to them. If the terms and conditions of that deal are not acceptable to either party, then everyone is free to not accept it. To compel either party (by force, coercion, regulation, or other means) to enter a deal that is not favorable to them would be a terrible thing. This applies to both the sponsors and to the riders.

peetyjay (Aug 11, 2022 at 23:37)
@iamsx: Ethics and optics matter. If Red Bull and ESPN are making tens of millions on an event like this, you hope that the athletes are paid some portion commensurate with the product they provide. I don’t know who you are or how well you ride, but I will venture to guess that even if you are a better rider than I am, you probably suck balls compared to someone like Tom Van S. and so I am not going to pay money to watch you ride like I would someone like TVS. As a consumer who spends thousands a year on this industry, I want the industry to ensure these folks are treated well and can make a living. They are exceptional athletes who provide off the chart entertainment and a ton of stoke and inspiration for the masses of mountain biking consumers like us.

iamsx (Aug 12, 2022 at 6:14)
@peetyjay: Exactly! If the optics are bad, then fans won’t watch and Red Bull won’t make money. If the pay isn’t appropriate, then riders won’t ride and Red Bull doesn’t make money. I want everyone involved to come out on top, and only they know how to negotiate within their best interests. I wouldn’t ever want to force a rider to ride for a wage below what he or she is willing to ride for, and I wouldn’t want Red Bull to pay a wage higher than they are willing. If Red Bull doesn’t take care of the athletes and event staff, they deserve to be put out of business by we the consumers. A lot of these riders became who they are BECAUSE of Red Bull - should they have to pay Red Bull a living wage because of that service Red Bull provided to them? NO! Because that was not part of their mutual agreement. Both parties win when both parties are able to freely negotiate their terms. Both parties lose when one or both lose that freedom.

iamsx (Aug 12, 2022 at 6:22)
@peetyjay: Maybe I’m just talking past everyone - I 100% want to see these guys make a living wage. My point is that, if I, being an unaffiliated third party, dictate the terms of what each deserve for their part in the competition, one or the other is going to get screwed. If the riders get screwed, they leave and Red Bull looses the competition and the money it generates. If Red Bull gets screwed, then they stop the competition and the riders lose their source of income, anyways. I’m not anti-rider.

GT-CORRADO (Aug 13, 2022 at 8:15)
Big Corp(s) have agreed to pay for all band-aids consumed by Rampage Athletes, but were adamant that medical tape and gauze pads would still be at Rampage Athletes own expense.

wilsonians (Aug 11, 2022 at 10:38)
Anyone that only does rugged chutes and raw lines without flippy whippys at the bottom.

sino428 (Aug 11, 2022 at 10:30)
Its probably the same broadcast being produced by redbull, just being streamed on ESPN+. I doubt ESPN plans on producing their own broadcast.

Dudeclimbsrocks (Aug 11, 2022 at 10:43)
Almost certainly ESPN+ has bought the US rights so they're just broadcasting RedBulls production

I have no other interest in this event. Other than Brage's line.

a-green (Aug 11, 2022 at 12:21)
Way too late. I’ve always wanted to come over from the UK to watch but the late announcement always makes it difficult to plan…

Frenchemetalheads (Aug 11, 2022 at 22:53)
@TrevZ: i can tell you fore sure that the riders involved were updated just a week ago about all this.

peetyjay (Aug 11, 2022 at 23:42)
They had to make sure the swell was big enough and the set intervals were…oh wait wrong sport…yeah, why the hell did they wait so long?

freeridejerk888 (Aug 11, 2022 at 19:37)
Hopefully it’s time to make room
For the next and current gen riders. Lots of talent not being able to compete casue some old heads who wouldn’t even qualify if they needed to Has to change.

i-like-toytles (Aug 12, 2022 at 9:28)
Honestly I'd rather watch Rampage with no commentators and instead just a feed from a microphone aboard the chain-stays of the bikes. It would give a better impression of what they are going through up there.

TeamDGAF (Aug 12, 2022 at 16:46)
There is no money in Freeride its only for the love you see. Years of digging, building, testing, genie pig, injurys, recovery, paying out of pocket, real blood sweat and tears. There are so many good builders and riders not just 18 showcased at Rampage. They need to close the gap. Start paying or riders should unionize. Don't be like the stupid fighters of the UFC used and abused like cool looking dogs. Then only to be tossed aside with nothing to show but a lifetime of injury. Sad

sajackson (Aug 30, 2022 at 18:24)
Did the same this morning as well as a buddy of mine, I got 1 ticket and he was on at same time but got skunked. I tried to get back in for another but too late. They were gone after only a few minutes. Last year they released another batch later so keep watching. Also need eventbrite login already going to have a chance

luckynugget (Aug 11, 2022 at 21:15)
interested to see the bikes this year. It will be a mix between 29'ers because the rider's bike sponser can't comprehend there's more to it than being the fastest to the bottom, or custom bikes with normal sized wheels that will never be available to the public.

Lokirides (Aug 11, 2022 at 10:28)
I would argue Bas would have won last year if he hadn't crashed. His front flip was by far the most insane trick of the contest.

everythingsucks (Aug 11, 2022 at 14:58)
Here’s a real guess for you. The sandbags are obviously holding the feature up since it’s such a steep face. As for the “concrete”, if you look in the background you can see other pockets of “concrete”. My best guess is that’s the dirt in the area that packs the best so they go grab it from other spots and use it for the takeoffs so they keep their shape.

TeamDGAF (Aug 12, 2022 at 16:53)
It's not concrete I promise you. It's pounded and packed hard by pro builders. You've just never watched a skilled builder. Why would they use concrete? It's terrible for jumps or everyone would use it.
Below threshold threads are hidden

freeridejerk888 (Aug 11, 2022 at 19:36)
When free ride was freeride it was called a tripple crown. The fork crown and the one below the headset and the one above it. The dual crown thing is newer thing. Is the marzocchi drop
Off tripple. @UTtrailrider:

leon-forfar (Aug 12, 2022 at 14:30)
@freeridejerk888: That's (rightfully) called the fork arch lol. The arch/ lower legs are one piece that holds the wheel, while crowns hold the stanchions. They are fundamentally different pieces. Just google "Fork Crown" and "Fork Arch" and you will see that they are different, and globally recognized as such.