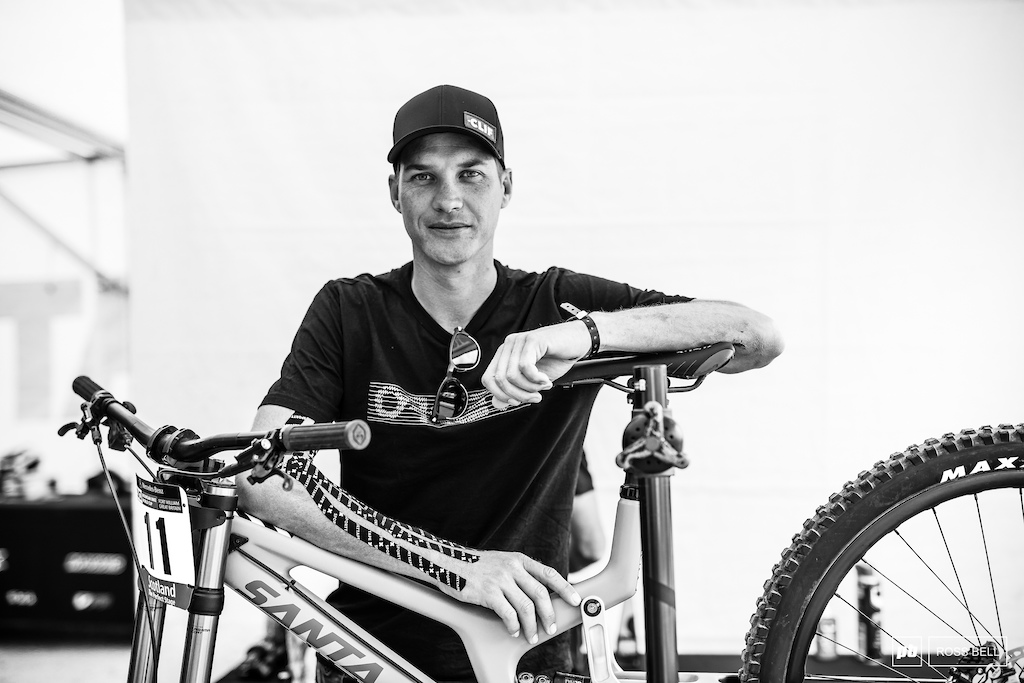 Our man on the ground at Fort William, Ross Bell, caught up with Greg Minnaar and found out how he got injured, and what his plans are for the rest of the season.

How did you crash?

We came to test the new V10s and my pedal hit a rock. Funny enough, it was one of the final runs of the day. I won’t say the last run, but pretty much was. And clipped my pedal on the rock and then rode the bars and just went down head and arms first. Arms and then head. And kind of flipped over. Yeah, I got a radial head fracture and so far I think I’ll be out for at least the next two World Cups. This weekend and Leogang. But 4-6 weeks I think total. It would be nice to be back for Val di Sole.

What are your plans now? Are you heading home?

I’ve got some therapy and treatment already started. I’ll be at Leogang. I’m hoping to ride, or at least get back training the week after. I’ll be in France then. No time to go home. I have to recover and start training again.

Will you switch focus and start looking towards World Champs?

World Champs is always a focus every year. It’s one race. I think the focus now is to try and get healed as quickly as I can and try and get some bike time before Val di Sole. I think that’s the real race. Because it’s going to be a bit of a tough race arriving at Val di Sole for the first time on a downhill bike. But I think we’ll be all right. I probably won’t be at good strength, but you know I’ll be riding every day.

How does getting an injury mid-season affect your momentum?

You train so hard, and that's what the hardest thing about it is. You’ve put so much effort into getting here, and then it’s just a silly thing that ended up happening. It does affect your momentum. It also kind of puts you in a kind of relaxed mode now mid-season which I guess is pretty good. It gives you time to focus and regroup and get back for the second half of the season. It’s hard to just put all that focus onto World Champs. I think that would put way too much pressure on it, so I’ll put it into the second half of the season.

Will you watch the race this weekend?

Yeah, I’ll be up on the track for sure. I mean I love Fort William. It’s a great event. Just one of my favourites in term of events. You know, World Cup racing is good fun from the sidelines. I’ve only got to watch one World Cup before. That was in Leogang watching Ratboy have a great race there and Stevie Smith take the overall. I was sidelined, I had a knee injury, but it was awesome to watch. So I’m sure this weekend’s going to be pretty cool. 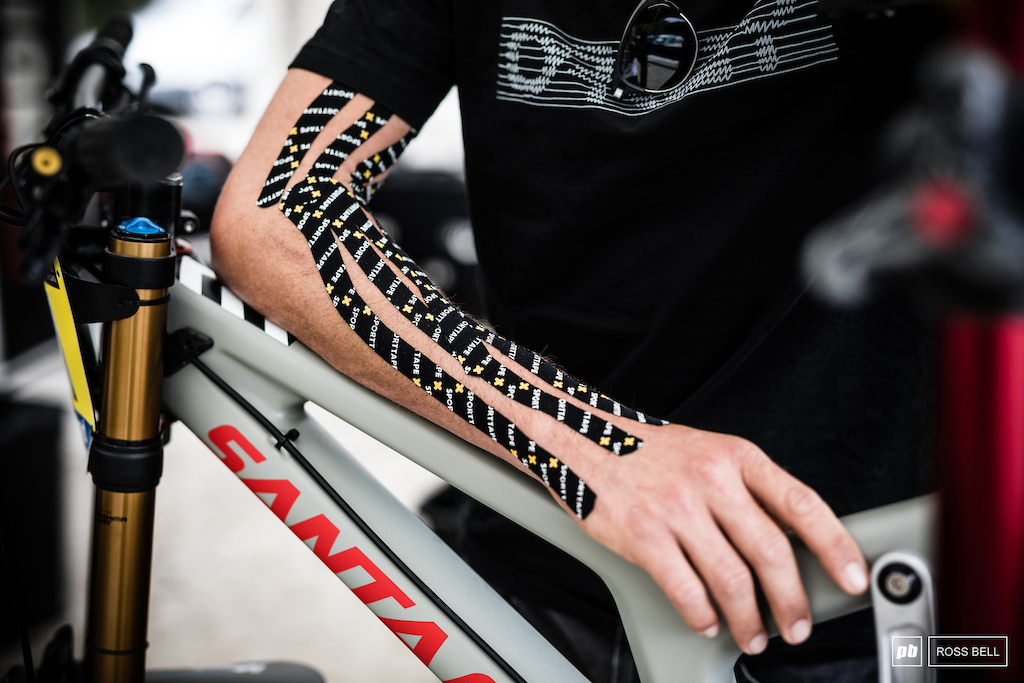 bishopsmike (May 31, 2018 at 14:01)
Awesome attitude though! "Broke my arm, probably out of the points race, whatever it'll be fun to party this weekend!"

BEEner (May 31, 2018 at 10:58)
I've had this exact injury. Super annoying because it doesn't hurt. Your elbow just feels stiff and you have to have it in a sling. The radial head is the little cup joint at the top of the radius... female end if you will. When you jam your arm like greg did, the radius just forces up into the cup and reams it open until you get a hairline fracture on the cup itself. Mine was skateboarding and I hit an asphalt sample hole that wasn't filled.... super annoying.

I had a radial head fracture from a crash about a year and a half ago. I think there are varying degrees of "fracture" because mine hurt like hell. Almost passed out from the pain/shock. In the crash my elbow got forced to bend backwards under the weight of my body and the radial head snapped clean off and was not even aligned with the rest of the radial. Some ligament damage as well. I needed surgery to add a titanium plate and 7 screws to re-attach the head to the radius. Arm was stuck in a splint at 90 degrees from wrist to shoulder for 3 weeks. Couldn't even ride a bike around a parking lot for at least 6 weeks after the surgery.

All good now, but my elbow does make a strange grinding feeling when I rotate my hand palm up to palm down.

BEEner (May 31, 2018 at 12:21)
@mrleach: yes for sure but by fracture I typically mean a crack that hasn't caused any movement or other damage as a result of the fracture. What you had just sounds plain awful :/

WestwardHo (May 31, 2018 at 12:30)
@mrleach: Haha my right arm makes some weird grinding sounds from my radial head fracture. I use it to annoy my wife when we're sitting on the couch

chezotron (May 31, 2018 at 19:44)
Radial Head is a British band. They're quite well known, you know? They have a large following and get The Bends from time to time.

BEEner (Jun 1, 2018 at 8:06)
@PauRexs: in the case of the radial head a cast doesn't do anything when you have a small fracture. I don't know the specifics of Greg's case and what his doctor told him to do... but in my case, All I did was wear a sling for a month with no cast and then it was healed.

nojzilla (May 31, 2018 at 10:03)
Injuries SUCK
currently recovering from 4 flayed ribs, collapsed lung an a ACJ dislocation

WAKIdesigns (May 31, 2018 at 10:44)
@Steve-skidvd: "you ain't falling, you ain't pushing" - cannot agree with that. It's an awful oversimplification doing disservice to all people doing action sports, glorifying crashing and reckless behavior. Sometimes sht jut happens, it doesn't take a heroic jump at heroic speed to get fkd, more often than not, people get hurt in a stupid crash in a situation that could be easily avoided, it's just that at this time it wasn't. Also people of all level crash and get seriously hurt. I know an absolute Joey who I can tell you wasn't pushing at the moment when he fell and broke his femur. I also know folks who are ripping big time and don't crash. Sht just happens and let's not help it by sending more we can recieve. Knowing your limits, recognizing your mental state on a particular day, knowing when to push and when call it a day is a skill.

Steve-skidvd (May 31, 2018 at 22:20)
@WAKIdesigns: It is nice that you choose to analyse what was a simple consolation... perhaps to guarantee a crash free life you should remain on the couch, i am not attempting to oversimplify, i was merely attempting to reach out to a fellow mtber..... i will take your view though, the next time a situation arises where someone is hurt, i'll console them with 'sht happens'

WAKIdesigns (May 31, 2018 at 22:27)
@Steve-skidvd: it’s hard to read intention through internet. So fair enough. But I tend to give complex consolations... even if they touch upon concepts of causality, destiny, Gods will and deconstructing them. Pfffffkhmm straight face...

BorisBC35 (Jun 1, 2018 at 5:44)
yup, 2 years ago did this and snapped my wrist and four vertebrae. Went otb and wrist hit one tree, head hit the base of another and back hit the tree. Went from 20kmh to 0 in less than a bike length, hence all the broken bits. Good times.

billyno (May 31, 2018 at 10:14)
Just for info - it's not near the wrist, the radial head is the most proximal bit of the radius near the elbow. Not usually a significant injury but obviously will put an athlete out for a bit. GWS dude

vinay (May 31, 2018 at 13:34)
If there were more races in one season, he'd miss more races too. Unless he's really dominant, more races wouldn't help him get up there in the WC series. Though of course it would help him get more out of his season once he has healed. And obviously prove what you can do on the stuff you helped develop (tyre, frame...).

luckymixes (Jun 4, 2018 at 10:40)
@vinay: but at least he would have more chances to get back to form, and maybe win a round or two... Sponsor wise, if you miss a couple rounds in this current WC, it is almost a total disaster

They have raced 1 race I know it a short season but ask the guys the right questions.

alexander80 (Jun 1, 2018 at 1:14)
The motivation that Minnaar still has after 16 years of racing at the highest levels is just amazing. I hope he keeps goin for at least another season. Healing vibes to you, Greg!

BamaBiscuits (May 31, 2018 at 10:08)
For others who also got concerned Greg broke his noggin: it means he broke the head of the radius bone in his arm.

Staygnarlymyfriends (May 31, 2018 at 18:44)
Garen-damn-tee that good arm and hand will have a beer in it while spectating race day!!