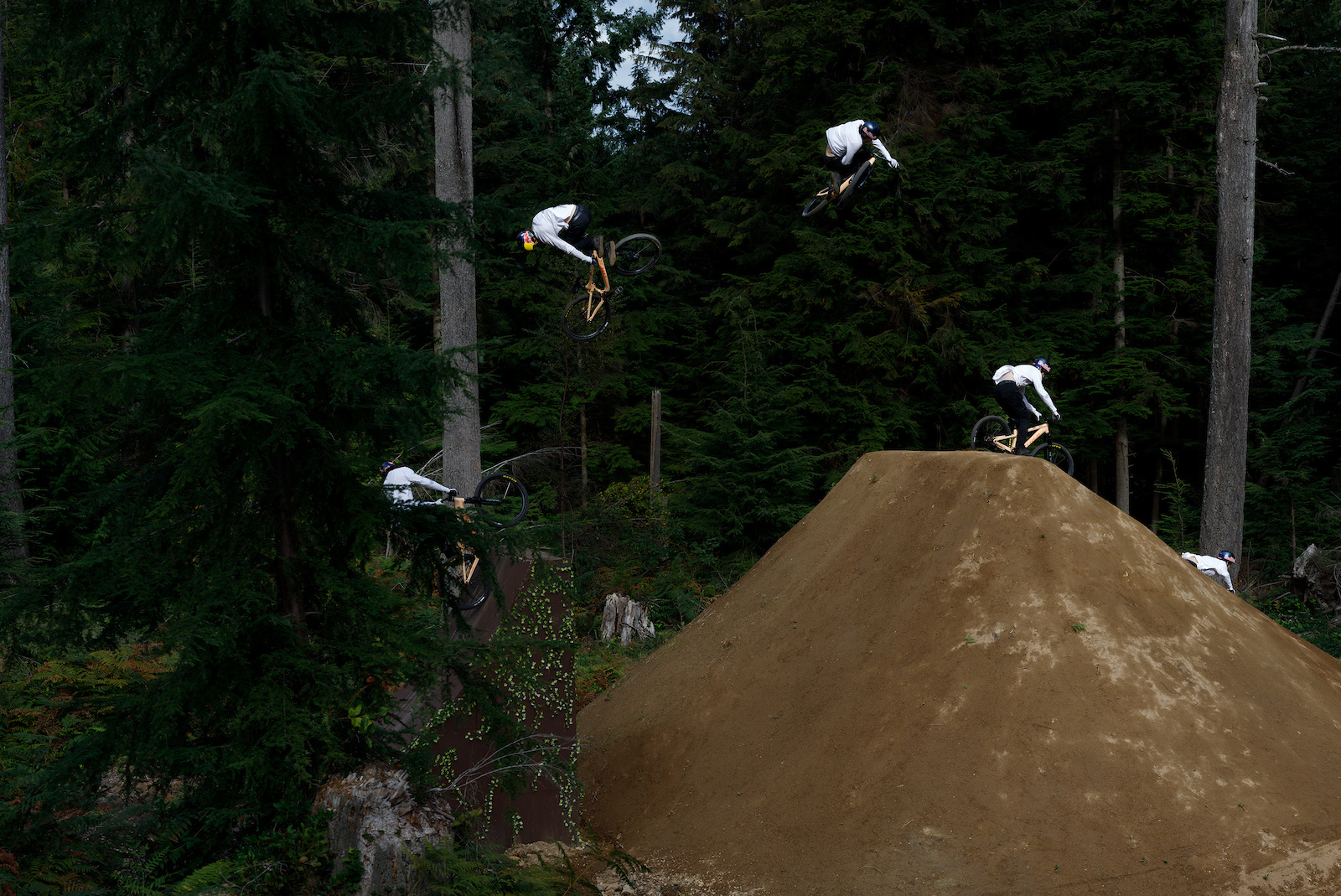 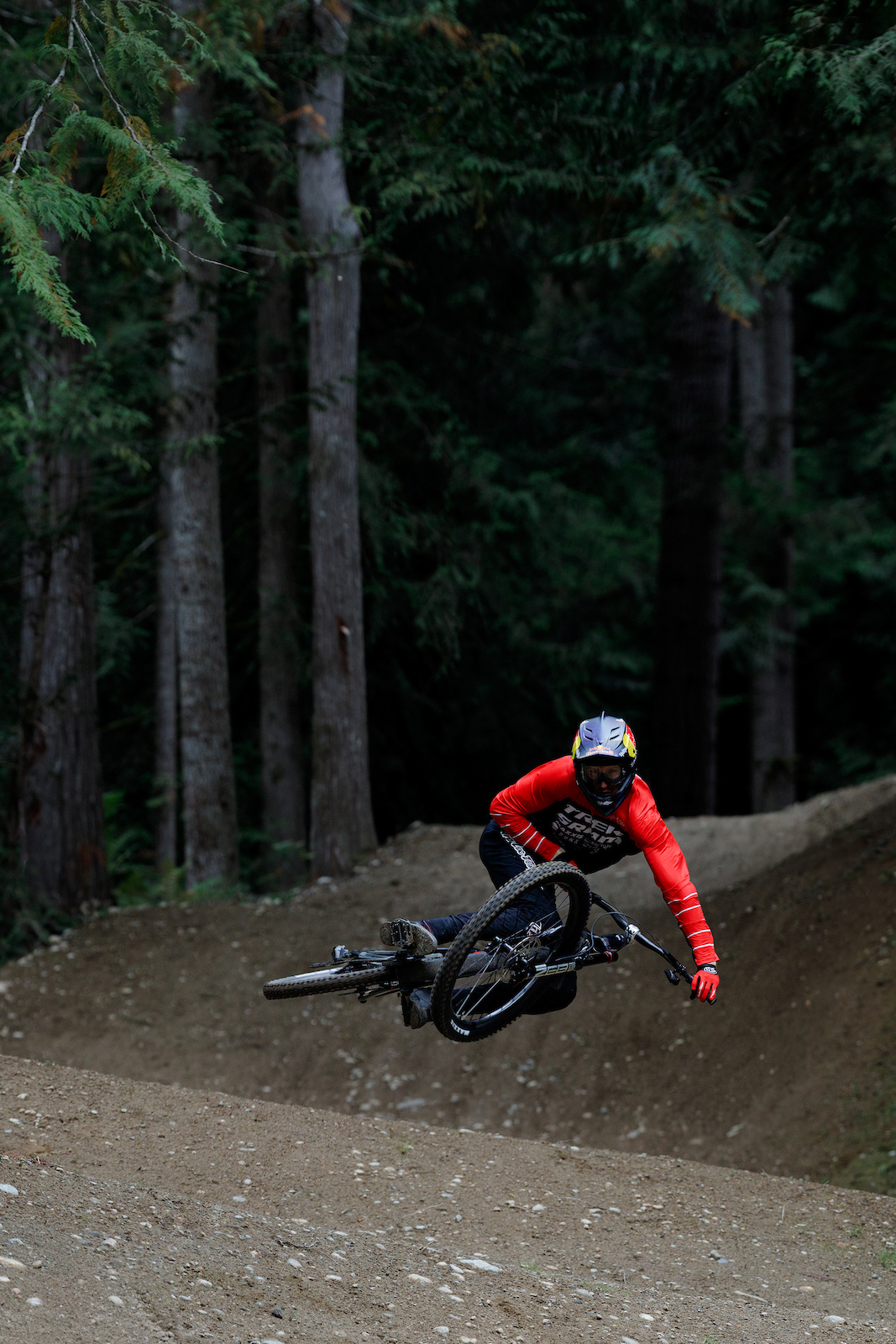 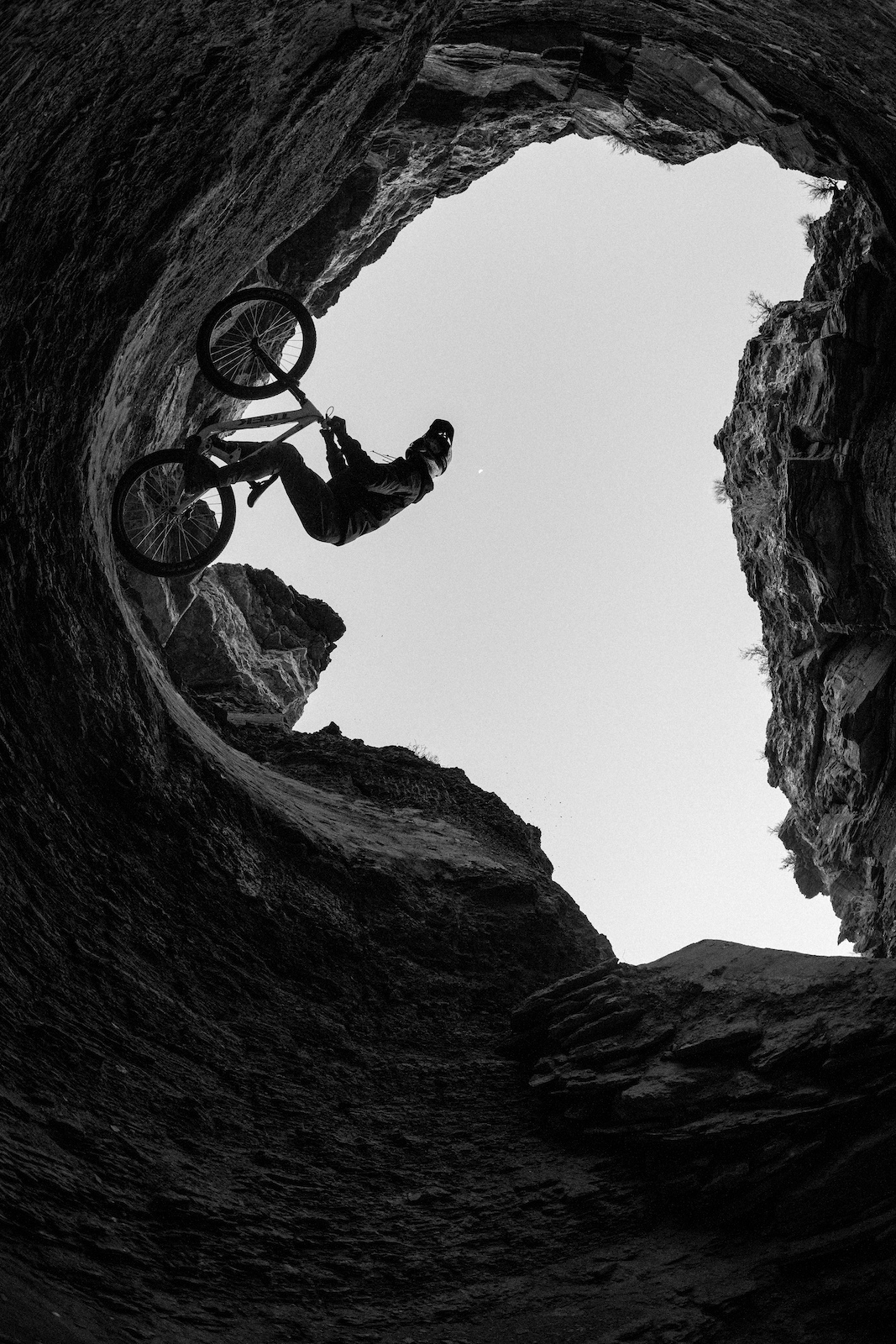 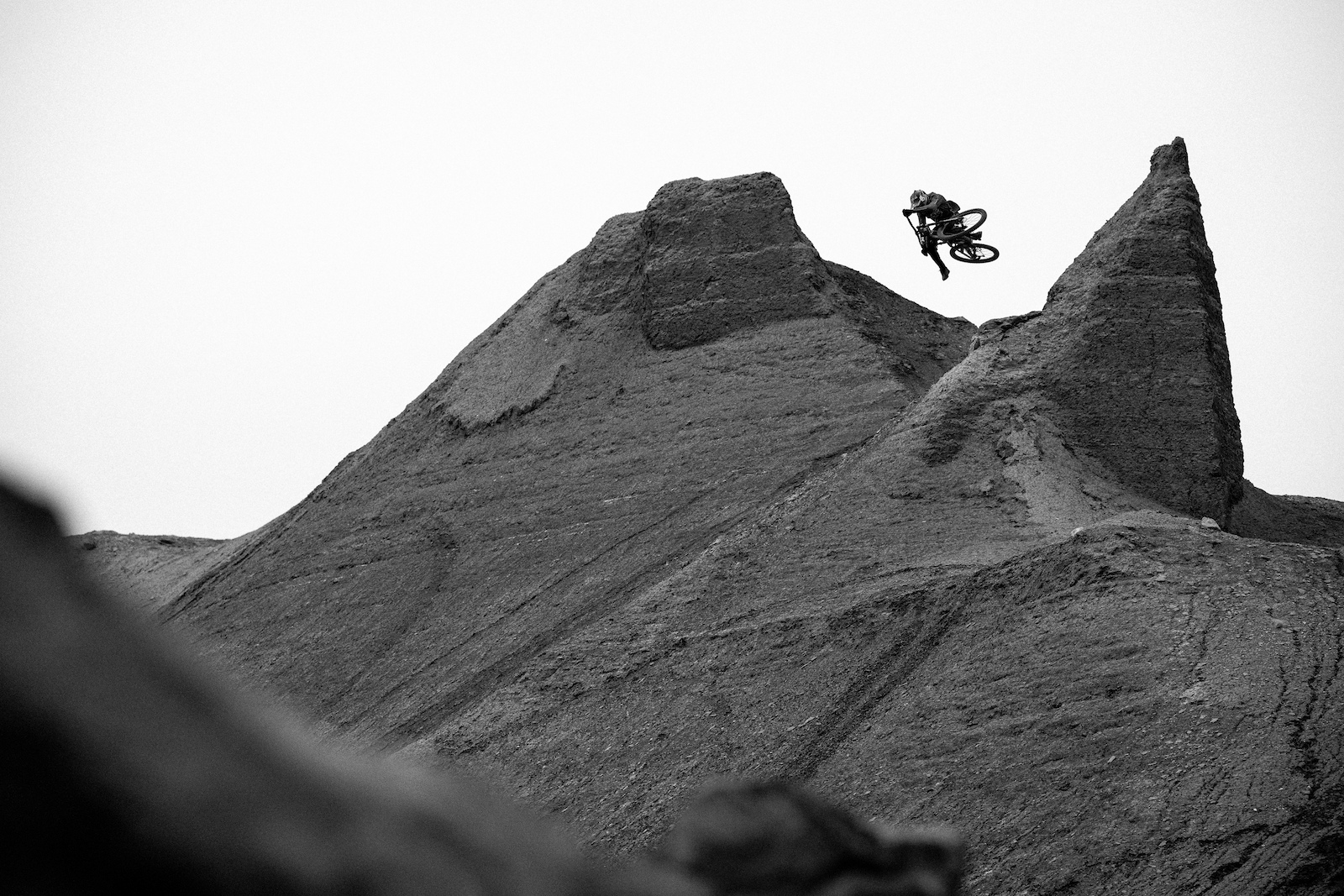 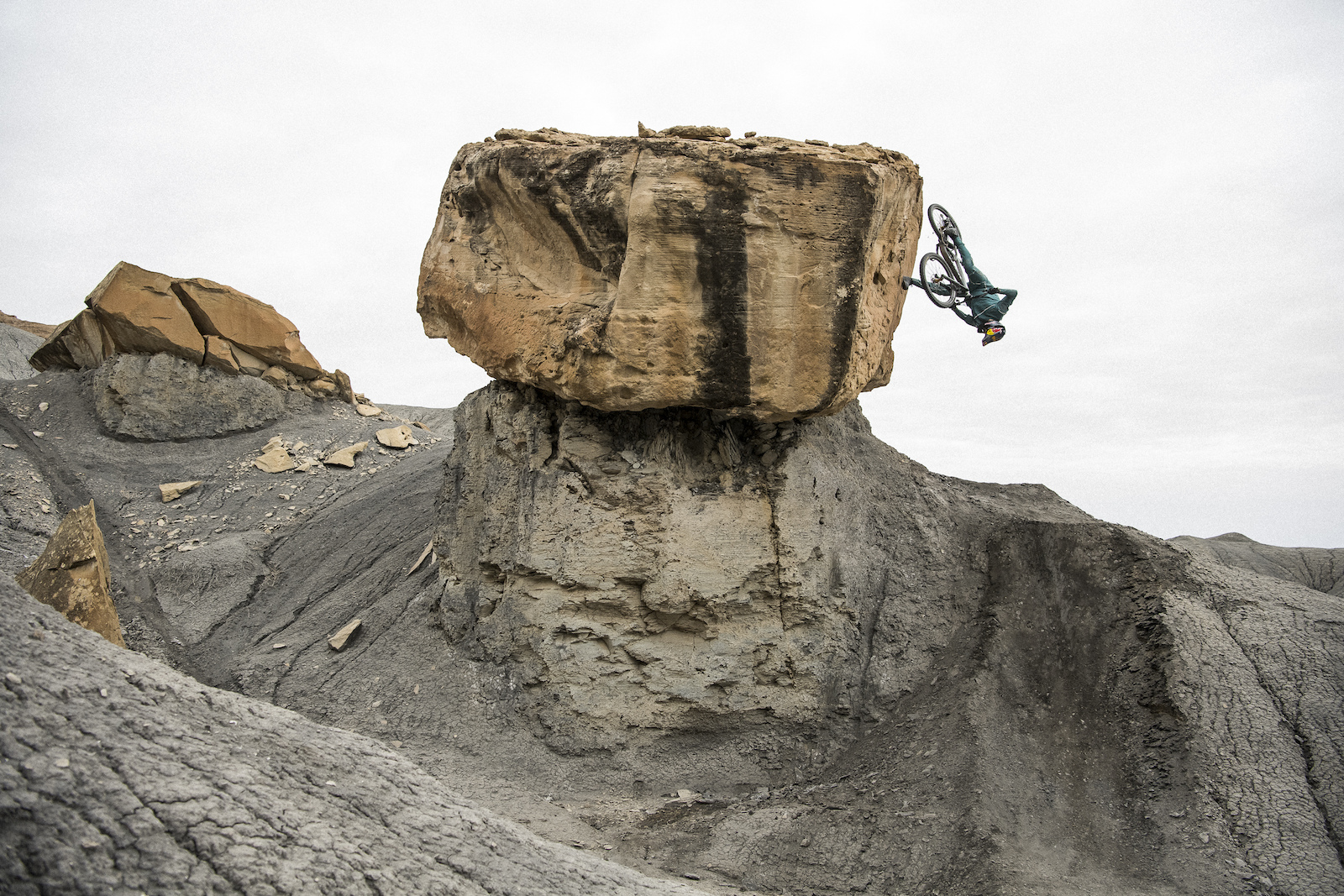 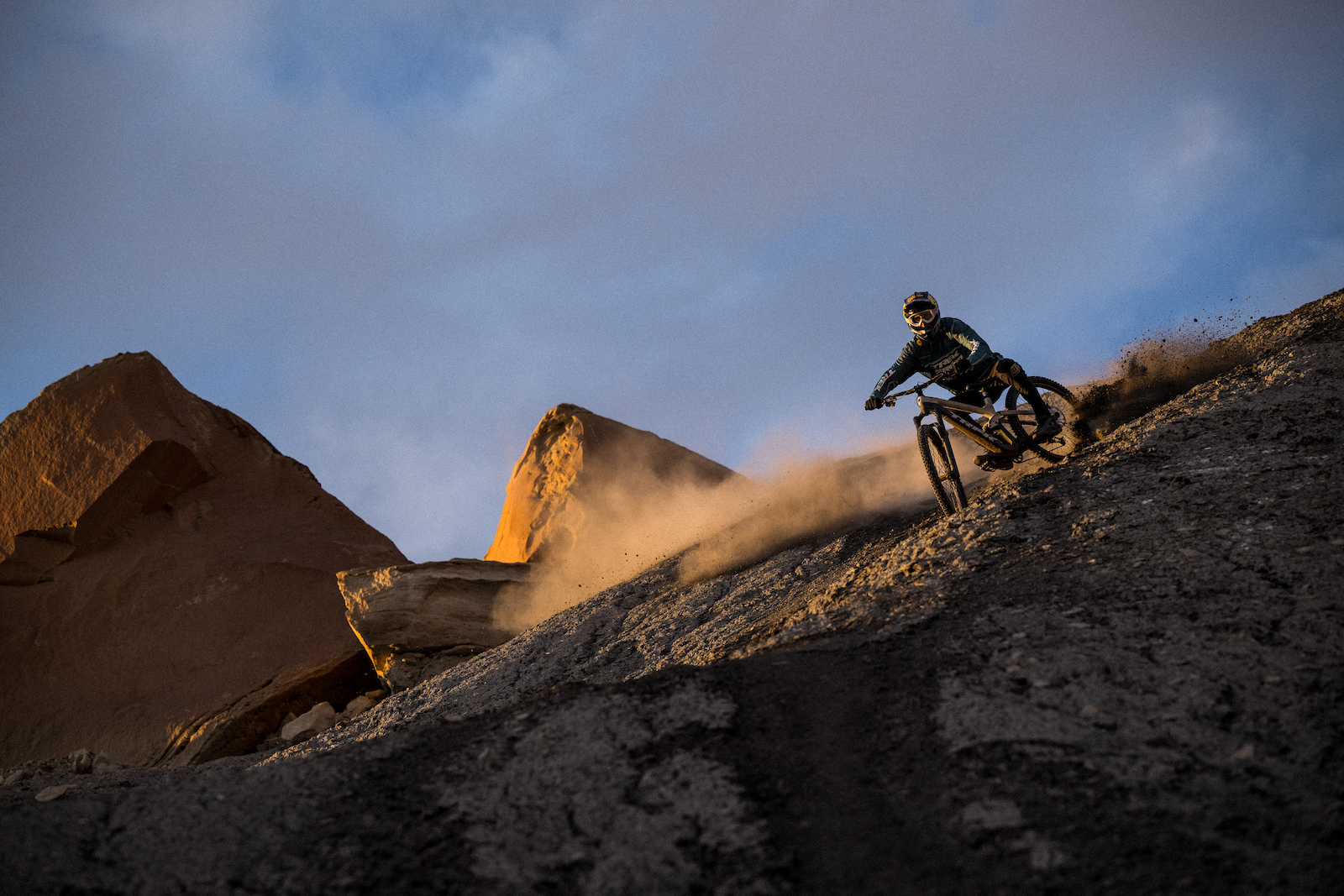 ryanandrewrogers (Jun 23, 2022 at 6:13)
He's also the current leader for the North American Rally Championship title, ahead of Travis Pastrana and Ken Block. God forbid he gets into another extreme sport.

thevids (Jun 24, 2022 at 1:26)
@kingbike2: Actually he has a BMX foreground!
He started riding BMX after his slopestyle period. Better late - right?

kingbike2 (Jun 24, 2022 at 6:25)
@thevids: thanks, I saw bmx influence in the edit but after watching this video it’s obvious slopestyle influences his bmx.

danielfloyd (Jun 22, 2022 at 12:48)
He could probably do really well. His reflexes are spot on for that kind of speed. Just look at how well he does in rally.

Sweatypants (Jun 22, 2022 at 16:06)
I preface what I'm about to say with saying that I think he might be the single most talented dude to touch a mtb, and I love his style and control, BUT... I don't think it stacks up. In Deathgrip trying to follow Brendog he looked like he was on the ragged edge and he had that huge off, and Brendog is a Top 30 racer? Follow Me with Stevie was a pretty good segment, but hard to judge how hard he was pushing. But I always get this though about dudes like Semenuk and Lacondeguy and Vinny T cause they always look fast as shit and have amazing control, but I dunno that it would translate to an ACTUAL race time. Flip side, Gee Atherton in his prime getting that 2nd at Rampage without any tricks, but his speed was naked eye faster than anyone else had really attacked Rampage for a good long while, maybe even up until Lacondeguy's 2018 run. Racers are just on some other shit man.

ryanandrewrogers (Jun 23, 2022 at 6:17)
@Sweatypants: I think if Semenuk got into racing DH it really wouldn't be long until he was easily a top ten competitor. Mind you he is the current North American Rally Championship title leader, a sport he's a relative newcomer to, especially compared to the likes of his competition in Ken Block & Travis Pastrana. I truly believe he might be just one of those generational athletes, capable of succeeding at whatever he puts his effort into.

gtill9000 (Jun 23, 2022 at 6:21)
@Sweatypants - I agree with everything you say, which is exactly why I'd like to see him try it. Give him a solid year to dial himself in for DH (much like the time he's spending in a rally car) and see. I think it'd be cool if he just picked one race at a familiar track (the Canadian Open in Whistler?) and just concentrated on that. It'd be just as interesting to me to see him do well vs. not do well.

Sweatypants (Jun 23, 2022 at 7:31)
@gtill9000: it would be cool for sure. unfortunately I doubt he cares. Top 5 or 10? even after a year? i dunno about all that. do I think he could do what Cathro has done and better (no offense at all)? most certainly yes. there's no way he wouldn't be fast. my statement was more about winning or not, which i didn't make clear. not doing good in a general sense.

emptybe-er (Jun 23, 2022 at 23:17)
@Sweatypants: Idk. All the top dh racers are within fractions of a second of eachother. So racing skill can’t be all that exclusive. An unsposored dh’er can have a good race and place in the pros times. I don’t see any random people posting edits that show anything close to semenuk’s skill level. A lucky day isn’t gonna cut it. He used to race dh, I imagine it wasn’t challenging enough. Maybe challenging from a fitness standpoint but not so much from skill.

jgoldfield (Jun 27, 2022 at 9:50)
I wonder if he'd ever doHardline? Could be a cool place to start-the course evens the playing field a bit between the freeriders and the racers. Hell, Brage did pretty damn well at Hardline last year, believe he had the fastest time on the top part

The-Foiling-Optimist (Jun 22, 2022 at 16:44)
Brage got robbed not because Brandon's not a better rider but because it was a film festival and Brage made a better film.

Whataboutism (Jun 22, 2022 at 8:17)
There will be some great text/email exchanges between management and editors today.

FarmerJohn (Jun 22, 2022 at 8:31)
def going to be more lay-offs when Outside see's these duplicated efforts

Ironchefjon (Jun 22, 2022 at 13:28)
Brandon once again showing that he is the smoothest criminal in the entire MTB sphere. There are a TON of talented riders, but none as dialed and smooth as Brandon.

Rexuis-Twin (Jun 22, 2022 at 9:12)
It's so cool to see another major trailblazer in the sport. I remember the days when wade simmons was blowing everybody's minds. I guess we will be seeing a lot of tailwhips at rampage this year. The Mtb scene is forging ahead.

pnwgnarnivore (Jun 22, 2022 at 10:13)
First it was the "who's post is better", next will there be an on the bike competition between @sarahmoore and @alicialeggett ??

pnwgnarnivore (Jun 23, 2022 at 8:19)
@sarahmoore: I feel like Sarah vs Alicia would be less catty than Mike vs Mike haha. It would make such a good PB video...doooooo it

wolfdoodle5017 (Jun 22, 2022 at 11:37)
He is great, smooth a silk. Though whenever I watch the BMX guys on Movies for your Monday, they are doing similar, if not much harder tricks, often off tiny, shitty transitions. I wonder how much influence the BMX guys have on the slopestyle riders?

Oakhills (Jun 22, 2022 at 12:31)
That convertible Rockshox fork is pretty innovative. Goes from single crown to double crown whenever you need it on the trail….

cachopoman (Jun 22, 2022 at 10:21)
I love this guy but I always have to wait to get home to watch anything from him.
I guess the "semen" triggers all servers filters XD.

jake28 Mod (Jun 22, 2022 at 10:33)
Sometimes I lose sight of what Semenuk looks like compared to mere mortals, but, this captures it well: www.youtube.com/watch?v=nLfNZGIfdT0

AC1987 (Jun 24, 2022 at 6:23)
Semenuk is the best, and this video showcases the incredible riding and skill. I feel like the video itself didn't have a great flow or theme though as it was very "clippy" and not super cohesive.

powderhoundbrr (Jun 22, 2022 at 8:13)
Impromptu Pinkbike Editor popularity contest? Who is it going to be?

valrock (Jun 23, 2022 at 9:18)
every time I watch these videos I have a question - are those publicly available trails or do they build them just for videos on private land?

kingbike2 (Jun 23, 2022 at 11:46)
Purpose built on private land and then dismantled after filming. Those stunts in the edit would be a death trap for anyone that doesn’t wear a Redbull helmet.

yoobee (Jun 23, 2022 at 15:13)
Most of the Utah scenes is publicly accessible. I've been riding around the Rampage sites already. The wooden stuff gets removed.

valrock (Jun 24, 2022 at 8:22)
@kingbike2: well some of the lines look more like parts of a good bike park, look at 14 sec mark and pretty much most of the first minute of the edit. That is what I am interested in.

rideitall-bmx-dh-road-unicycle (Jun 29, 2022 at 8:52)
@evehmeyer: more specifically Utah.... but what zone exactly. for being freeride, a lot of freeriders are pussies and don't keep the spots free....

Pinemtn (Jun 22, 2022 at 22:58)
it's honestly just too much for my brain. I had to pause it and watch in sections.
Below threshold threads are hidden

skimtb1 (Jun 22, 2022 at 19:57)
Every single shot was a different venue on a different bike in a different little zoot suit outfit. Not my jams and hard to watch. The riding was tight when it was actually happening, but for fuck's sake it feels like a pretentious little highschool media arts project.

Samtrailbuilder (Jun 22, 2022 at 10:12)
Great riding. When you could see it. So much needless editing wasted that riding. Crap directing. Can't you just show Semenuk doing his thing? Instead we get flashes of him in the air and here and there. The director wanted to show his style instead of showing substance. A waste of great riding

isaacwallen (Jun 22, 2022 at 10:32)
I’m sorry this didn’t work for you! The point was to show bits and pieces of unused archival footage from previous shoots and sprinkled in new content. It’s fun to play around with a mix of imagery that has some disorganization to it. We’re just having fun