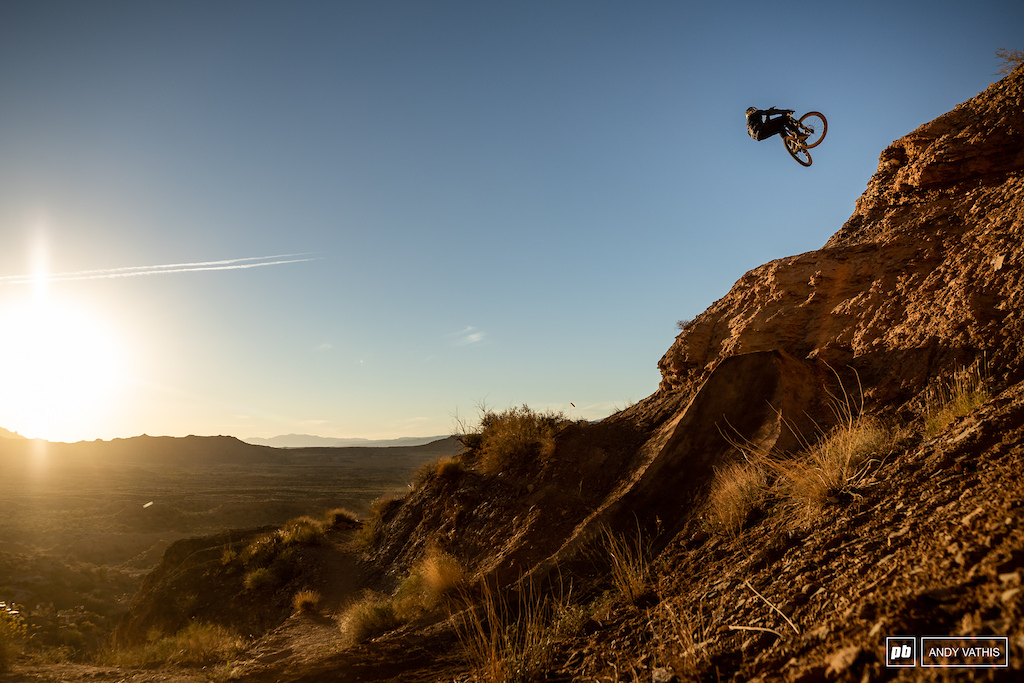 The world's biggest freeride event is back and riders and their dig teams have been hard at work for the past week transforming the rugged cliffs of Virgin, Utah into spectacular lines ahead of the main event tomorrow.

Rampage is famously hard to predict with a combination of weather conditions, running order and line selection all coming into play to decide the winner. This year's field includes returning champions in Andreu Lacondeguy, Brandon Semenuk, Brett Rheeder, Kurt Sorge, Cam Zink and Kyle Strait, veterans such as Tyler McCaul, Carson Storch and Thomas Genon as well as first-timer competitors William Robert, Alex Volokhov and Dylan Stark. Every rider on the hill has a shot at winning if they stomp their line and we couldn't be more excited for the big show to kick off.

So, we're turning it over to you now. Who do you think has what it takes to claim the top of the box tomorrow? Let us know your choice from the entry list below.

You must be logged in to take this poll.


Who do you think will be underscored at Red Bull Rampage 2022?

You must be logged in to take this poll.

dfiler (Oct 21, 2022 at 11:47)
@scott-townes: Where are you getting that "a vast majority of people say Rampage is too slopestyle"? Pick any topic and you'll find people complaining about it on the internet. But as far as I can tell, nearly everyone thinks rampage is gnarly AF and loves the shit out of it.

cougar797 (Oct 20, 2022 at 12:04)
Andreu has had a year or two where he could have arguably won. He's also had a couple where a crash is all that stopped a win. If he holds it together hes always a solid option.

raleightheodoresakers (Oct 20, 2022 at 12:41)
Godzkiek has done that 70+ ft gap jump several times. You know he's planning for an invert over that gap. Lacondeguy for sure is underrated as well.

Struggleteam (Oct 20, 2022 at 12:43)
@misteraustin: yeah man. dude is a maniac. When he gets off line, somehow doesn't die and then pulls it back together....epic. Then he crashed on a jump that I might even hit. Such a bummer. Love to see him win it this year.

freeinpg (Oct 20, 2022 at 13:52)
@Struggleteam: omg...who pulls it out of the weeds close to absolute destruction and then still throws down?? What a legend.

manhattanprjkt83 (Oct 20, 2022 at 14:52)
@DylanH93: Yeah I was in the 'Redbull VIP' area which is just a little plateau and that jump was right in front of us at the bottom. We were screaming, couldn't believe he bailed.

DylanH93 (Oct 20, 2022 at 14:53)
@manhattanprjkt83: Watching it on video it seemed like he bailed out of nowhere. Being there in person did it look like he bailed early or was it clear his landing wasn't going to work?

Mason-Walls (Oct 20, 2022 at 16:56) (Below Threshold)
Personally I am not a fan of Lacondeguy's style he looks out of control. I like rider's that can ride fast but still look silky smooth. I'm not hating on Lacondeguy, he's an amazing rider and sends it, but he's just not my favorite.

scott-townes (Oct 20, 2022 at 18:11)
@bt006shreds: wtf and I'm not sure. Its not just about a single trick and Semenuk's line is so intense. Remember the canyon hip gap drop and how big that flat drop tailwhip is.

RCorlett (Oct 20, 2022 at 19:03)
@cougar797: My thoughts exactly. His extensions are huge and his energy coming down the mountain is even bigger. He is one of those riders I selfishly wish was better at social media so I could see more of him.

Sorge, Zink, McCaul, Strait. Hands down the gnarliest line choices of the group.

wcjrush (Oct 20, 2022 at 13:06)
I don’t know my dude. T Mac has done some crazy shit over the years. I saw him in 2010 live and Gee. Their lines were close to each other’s. Gee was so smooth and extremely fast. T Mac had big drops and jumps. But I’ve never thought in all these years T Mac was overrated. He’s missed the podium when I’ve thought he deserved a spot up there.

chrisclifford (Oct 20, 2022 at 13:20)
People complain about the event not being gnarly enough then make comments like this, saying the guys who routinely ride the most technical lines are overrated

misteraustin (Oct 20, 2022 at 13:52)
@theging: Sorry, I’m halfway just trying to get people riled up. Some of those guys runs and style just never gets me very excited, and then I see scores come in. But I have never been in person, and I am sure they are all insane. Not to take away from them in any way. The magnitude definitely does not show on camera.

Most importantly, ITS RAMPAGE, we’re all stoked!! In the words of the Grinch, “There will be no sad faces on Rampage”

olafthemoose (Oct 20, 2022 at 14:16)
@chrisclifford: thank you. I honestly expected more bullshit rampage hate in the comments this year. Glad to see so many other people stoked

samfr1000 (Oct 20, 2022 at 15:34)
@misteraustin: I only agree with you on Sorge. Not to say what he's doing isn't impressive, but he's had some wild scores for stuff that is no where near as impressive. Blows my mind he has three wins.

The cynic in me would say it's because his pals are judges, but that's probably unfair.

T-Mac has had some storming lines. Like monster stuff. Back when everyone was using wooden features he built a massive natural drop. There are years where Sorge has massively outscored him and I don't think it was in any way deserved.

scott-townes (Oct 20, 2022 at 16:01)
misteraustin is another perfect example of why we should never allow fanboys to judge a MTB event.

otterdirt (Oct 20, 2022 at 12:35)
I feel McCaul has been underscored in the past. It would be awesome to see McCaul break the top five...would be great if he got in the top three

chrisclifford (Oct 20, 2022 at 14:08)
@tbmaddux: underscored doesn't mean you haven't been successful. He could've won every year and still have been underscored

WaterBear (Oct 20, 2022 at 12:36)
Everyone: Rolls eyes and votes Semenuk to win.
Also everyone: Knows something about Jaxson that I don't know.

suspended-flesh (Oct 20, 2022 at 13:35)
Riddle rides with a style the judges have yet to appreciate fully but the viewers get it.

dfiler (Oct 21, 2022 at 11:51)
Jaxson's style brings something fresh to the scene. Maybe it get's played out eventually, but until then, it's still going to have me going holy shit. The amplitude and bike/body separation on some of the tricks is something new to rampage.

kroozctrl (Oct 20, 2022 at 12:05)
Who ever wins…will have a single crown fork. Slightly hoping Dylan wins. But I know everyone will be wanting Brandon to win.

johnyyy (Oct 20, 2022 at 12:19)
not sure if everyone will be wanting him to win, for me its pure calculation: judges will score tailwhips and barspins super high (sadly as it slightly kills freeride soul of Rampage)

I will say this.... I almost think scoring is going to have to change at some point. Similar to how speed and style is. The main goal is speed. The tricks take time off the clock.... but only to a point.

I think there should be a combined score and they should have different weights. It's rampage so I think it should be in this order....

Have a judge that focuses on each piece and is a professional at that piece... and has ridden rampage...
Combine them.

Say overall is out of 10. Tricks is out of 15. Amplitude and Flow are out of 20. Tech is out of 35. Or some similar combination. Hell maybe Overall gets a bigger vote. I don't know.

I just don't think having 5 dudes gather around and get hyped off each other is the way to do it anymore. You end up judging the first couple guys super crappy. Then you have a guy like Semenuk come that almost has a higher starting point because of who he is... so he almost has to screw up to lose. Or you have one dude do something crazy and it gets the judges hyped... then every score after that is elevated because they're elevated.

I'd hate to be a damned judge... but I tell you what... I'd hate even more to be Cam McCaul watching his little brother do that stuff live and attempt to stay calm and professional...


Me.... I just want to see everyone safe and I want to see Tyler McCaul on the freaking podium!!!!!

loam33 (Oct 20, 2022 at 12:25)
If Andreu is on form, it would suck if he winds up second behind someone just because they barspinned and tailwhipped with a singlecrown

WaterBear (Oct 20, 2022 at 13:28)
I'm extra-less-enthused about the single crowned shenanigans given that there was, apparently, a single crown bike in 2013. Not as novel as I thought.

pierroleloup (Oct 20, 2022 at 13:50)
@stalkinghorse: just saw a live feed on instagram from a digger of William Robert and he was saying that Strait crash on a gap…

frednewton (Oct 20, 2022 at 14:48)
i think semenuk will win but i hope someone else does. its just a bit predictable. rheeder could potentially do it with the tricks he can do with a single crown fork but i think if rampage was more judged on style andreu, tyler or jaxon riddle would win.

dkendy1 (Oct 21, 2022 at 2:01)
Who will be underated by the commenters, everyone else except Semenuk. Fair enough I voted for him to win in the pole. Everyone who gets to the bottom is a winner, and everyone who tries is also a winner. and we watch and i feel like ive won. chicken dinner!

TrevZ (Oct 20, 2022 at 12:17)
It would be cool if Pinkbike had a way to randomize the order of the poll options so that it would be a better representation. IE everyone who loads the page gets a different order each time. Right now people just read top to bottom and grab the first one that they're fond of.

DylanH93 (Oct 20, 2022 at 14:49)
Surprising polling results. I thought the general consensus was Semenuk is a hell of a rider and definitely a champion but Rampage should go back more to it's freeride roots.

rabcity (Oct 20, 2022 at 20:22)
@DylanH93: semenuk has some of the gnarliest features on the course, just happens that he can also trick that crazy shit

bikerdre (Oct 20, 2022 at 14:13)
Semenuk is at another level of riding and creativity. But the roster is heavy. Really like Andreu tho!

pinkbert (Oct 20, 2022 at 13:59)
Who at Outside is holding all the Pinkbike writers hostage and forcing them to write about rampage?

DylanH93 (Oct 20, 2022 at 14:50)
I'm loving all the Rampage articles. I've been legit excited all week. Can't believe it's less than a day away. This must be how people feel about the Superbowl haha.

Dogl0rd (Oct 21, 2022 at 12:25)
The additional content makes it better, gives the riders a story. Without it the live feed is a lot more boring
Below threshold threads are hidden

makemymountain (Oct 20, 2022 at 12:28)
We all know Brandon is going to win just for showing up and being the good red bull athlete that he is. So the real question should have been "who will be taking second place at Rampage this year?"....

phastlikedatnascar (Oct 20, 2022 at 12:41)
Wild take^ Semenuk has just been flat out better than the competition for years now.