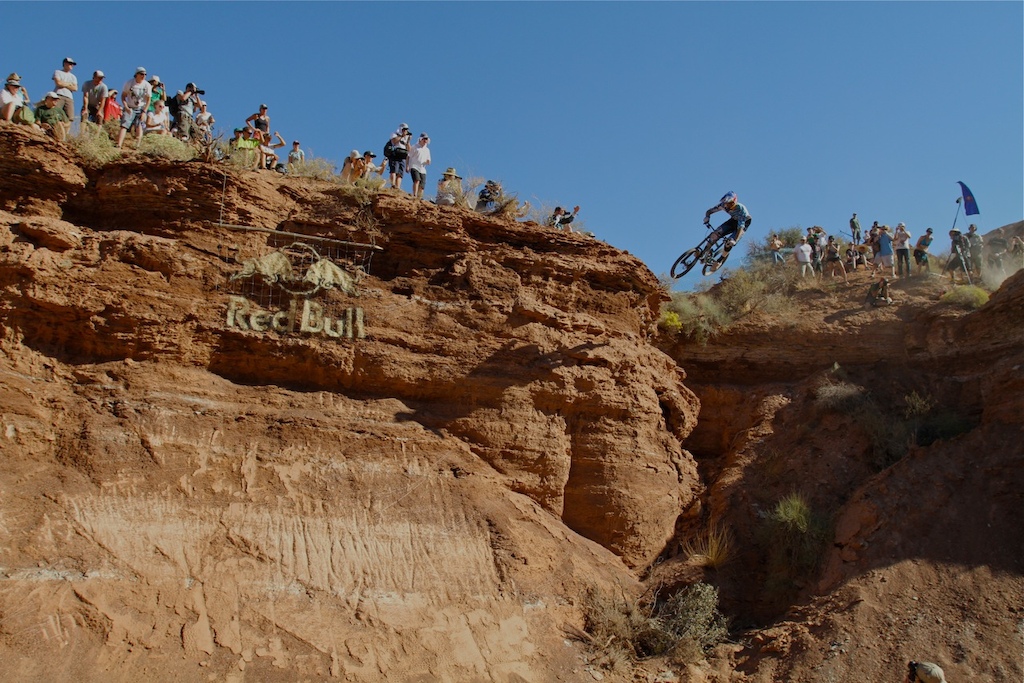 In just two weeks, the first rider will drop in at the 2022 Red Bull Rampage on Friday, October 21st. For this 16th edition of the big-mountain freeride competition, 18 of the best freeride athletes will travel from across the globe to Virgin, Utah.


For those unable to attend the 2022 Red Bull Rampage, the event will be streamed live exclusively on ESPN+ in the U.S., and on Red Bull TV in all other countries. In addition, the complete event will be available on-demand on both ESPN+ and Red Bull TV following the competition. Then on October 30th, viewers can also tune-in to a condensed 2.5-hour replay that will air on ESPN.

For further information about the event, venue access, wristband pick-up, on-site amenities, and much more, you can read the Red Bull Rampage spectator FAQ.

bigtim (Oct 7, 2022 at 11:55)
@wobblegoblin: I mean, really there is kind of just the one dyke joke in slightly different guises... Now, go stick your finger in the hole in the dyke.

misteraustin (Oct 7, 2022 at 10:25)
Idk how this would work, but I wish there were some way to level the playing field at Rampage for riders' line choice. Older returning riders always have their old lines reserved, while new younger upcoming riders are forced to pick around the edges of the old guy's claimed territory. Kinda feels like that weird surfer localism vibe, idk I don't like it.

FreerideFrank11 (Oct 7, 2022 at 10:30)
They should definitely have a different qualifying. It doesn't make sense to protect half of the entire field. It leads to a stagnated field. You shouldn't be able to put down the same safe run and get 9 or 10th. I think it should be ONLY top 5 ish are protected, at least one or more wildcard video entries, top three from proving grounds, the fan favorite run should also get into the next year.

Jdricks (Oct 7, 2022 at 10:46)
@FreerideFrank11: I like this a lot. Only five riders would make a lot of sense and would provide a lot more opportunities for young/ different riders to give it a go.

Whataboutism (Oct 7, 2022 at 11:35) (Below Threshold)
Its fine. Those old riders are just doing straight air no handers, while the young fella's innovate and create stuff worth watching.

misteraustin (Oct 7, 2022 at 11:54)
@Whataboutism: I guess it's just a problem with judged sports in general, but the old riders (I'm not including Brandon in this, he's a creative wizard) seem to get a lot of bonus points from their buddies in the judging booth, while the new kids getting creative and throwing down big style tricks/lines seem to be up against a judging wall. I guess the sport is all about creativity for me, yes the older returning riders are gnarly as f*%@ but it doesn't get me excited to see them do the same run from 2013 with a no hander and backflip to get 9th. Move aside for fresh creative talent if you're not going to show up to push the sport.

DylanH93 (Oct 7, 2022 at 12:03)
Aren't people pretty open to sharing lines and features though? Or you mean like not being able to build totally new stuff because existing stuff is there?

wilsonians (Oct 7, 2022 at 13:00)
I dont know if this venue will take that into account given how old it is. It usually counts for the second year of a venus i.e if they hold it at this venue next year as well. But I bet they will consider this a 'new' venue and its a free for all for digging and choosing. Been almost 10 years, Kyle Strait should not be allowed to claim a line just because he happens for be 40 years old and dug there once in his youth

sino428 (Oct 7, 2022 at 12:52)
Everyone complains that the riders aren't paid enough, but as soon as people are asked to pay even a small fee to watch them perform (ESPN+ is like $8 for the month), every starts complaining.

Does everyone not realize why athletes in mainstream sports are paid so much? All that money comes from ticket sales and TV contacts. In other words money people pay to watch the games.

hamncheez (Oct 7, 2022 at 11:46)
I watched Gee do that quarter pipe transfer with my own two eyes. After he did it, I walked over and looked at his takeoff. I'm still blown away. Anyone whos seen the quarter pipe knows what I'm talking about. I don't get how the physics of it even works. Probably the single most impressive thing I've seen done on a bike in person.

turbo8 (Oct 7, 2022 at 11:27)
@Telebikes: You should be able to use a VPN to watch on Red bull TV. Use NordVPN. I think if you use donut operator's (popular youtuber) link you can get discounts. NordVPN.com/donutoperator.

Or you could declare yourself a sovereign citizen, see how that works out

jrocksdh (Oct 7, 2022 at 20:10)
@turbo8: yup. Yal shouldn't be on the internet without a VPN too often-unless your just cool with giving out alllll ur info willy nilly.

FreerideFrank11 (Oct 7, 2022 at 10:25)
This year let's not have all the crap talk about it not being gnarly or rough enough. If you watch all the edits these guys put out they are all on smooth groomed jumps, take a look at Remy Mortons last edit,it was sick and no one had a problem with it. The riders are building what they want and riding how they want.

Riddler7 (Oct 7, 2022 at 11:27)
Rampage is one of the most stressful events I watch. The stakes on every single drop/jump are so high I get sweaty just watching. And that's with cameras not truly capturing how terrifying a feature is sometimes. I don't understand people who try and downplay the event and say its getting too "whatever".

luckynugget (Oct 8, 2022 at 10:22)
@MT36: weird how none of them are riding slopestyle bikes then. It's as if they are hitting shit way bigger and gnarlier than slope courses almost

nickmalysh (Oct 7, 2022 at 10:55)
"For those unable to attend the 2022 Red Bull Rampage", Tickets are impossible to buy, event happening in the desert, why limit tickets? there is no parking limitation or rock's limitation?

blackercanyons (Oct 7, 2022 at 13:19)
@Whataboutism: kind of. it's hard. the closest ridges are far enough way that you would have to use binoculars to actually see the riders. there are some cliffs around it you can get on top of but you can't see the faces the riders are on, you end up only being able to see the back of the ridges they're riding. meaning you can't see the riders at all once they drop in. also, the entire thing is on private land with controlled roads as the only way to get in.

freeride-quebec (Oct 7, 2022 at 10:42)
They missed their annoncement, the riders have been talking about it for a week on Instagram and such

watchtower (Oct 7, 2022 at 14:38)
Well, as the president of the Nullarbor MTB club I feel our offer to host the event has been all but ignored, discrimination? Who knows.

Jordanh604 (Oct 7, 2022 at 12:22)
Is there wood features again now or are they being left out of this site? Also what is the sense on a red bull specific event selling the broadcast rights to espn?

zoobab2 (Oct 9, 2022 at 12:20)
@wobblegoblin: for Dick jokes about Rampage, Cédric Gracia is the winner www.instagram.com/p/CVFuF8xoBLO

bman33 (Oct 7, 2022 at 10:51) (Below Threshold)
Agree. While the riders skills and runs/tricks are outstanding and deserved full props, everything seems too polished and dull. I know that sounds crazy with the level of risk and complexity out there now, buts seems too 'slope style' or 'yeah, we've seen it'.

loosegoat (Oct 7, 2022 at 11:32)
Maybe designate a section (like top 3rd). I still like the massive features, I think they’re still plenty rough not forgetting they’re doing it with their suspension maxed out, 60psi in their tires and a massive pair to operate around

MT36 (Oct 7, 2022 at 11:41) (Below Threshold)
Thank you. I respect all the flippy dippys and such, but it's too much like a slopestyle comp. Even with all the exposure and commitment, it still looks like a manicured jump line.

krashDH85 (Oct 7, 2022 at 12:57)
I think a lot of it comes down to this:
It's just almost impossible to judge the runs against each other because of the different styles. Early Rampage was just raw, gnar lines. No one was doing massive trick combos it was all about the "freeride".

Over the years, the talent got better and better to where people were doing no-handers and backflips on these raw lines, with maybe a popper lip or something. It then morphed into insane tricks down these areas, but now they needed landings because of the tricks that were being thrown.

It's all progression within the sport, but now essentially you have multiple disciplines of riding at the same venue. I don't envy having to be a judge, you are going to be criticized for your decision no matter what, because of people's personal bias and interests in what they "think" Rampage is and should be.

It's all insane talent on 2 wheels. I think it's awesome that we get to see some of the guys throw down super tech runs and others throw the mind boggling video game tricks. I think it's time for Rampage to fork into a couple different comps though as it's clearly gone different directions over the years. Let the jumpy guys do their things, let the techy guys do theirs, and judge them against their own category. Or, you have one comp with 2 different categories...either you sign up for the "freeride" or the more "slopestyle". That way if the jumpy guys want to compete in the tech category, let them, but they will be judged in that category. And vice versa.

I wouldn't be opposed to more and expanded Rampage!

FreerideFrank11 (Oct 7, 2022 at 14:19)
Have you ever been to virgin?? The riders are building, riding and foing to tricks that they want to do. If you want to see more loose rough lines ( which I do think are pretty sick) go qualify for Rampage and show em who's boss.

FreerideFrank11 (Oct 7, 2022 at 14:22)
@carlwheezer69: exactly these guys don't understand. If you actually only gave only 1 day for raking, and had no water the lines would either be unridable and everyone would crash, or boring as shit and no one would like it

PeruvianMountainRides (Oct 7, 2022 at 14:31)
Back to Basics. More Freeriding, less SlopeStyle!

chrismac70 (Oct 7, 2022 at 12:56)
Let’s hope it is a freeride competition and not another spinny flippy slopestyle comp like it has been for the last few years