Apr 8, 2022 at 12:22
by Sarah Moore
Share
Tweet
42 Comments
Two flat out races to kick off the World Cup XC season. In the women's race, a strategic Pauline Ferrand-Prevot would never take the lead until a sprint to the win ahead of Laura Stigger and Evie Richards after a strong pull from Rebecca McConnell saw her fading to fourth in the final lap. Newcomer to the Elite category, Mona Mitterwallner would finish an impressive sixth in her first ever Short Track event.

In the men's race, Vlad Dascalu's race was over before it truly began, with a broken chain off the start line. Henrique Avancini was the crowd favourite and took the lead for much of the first half of the race, but in the end it was a strong surge from Alan Hatherly to take the first win of the season and the overall lead heading into Sunday's XCO. Thomas Litscher and Maxime Marotte were hot on his heels, while Avancini settled for fourth and a strong front-row start position on Sunday.

This year there will be an overall World Cup XCC champion in addition to the World Cup XCO champion. The results from the XCC will continue to determine the front three rows of the XCO and contribute to the XCO overall, although a win will now be worth 80 points in those standings instead of the previous 250. 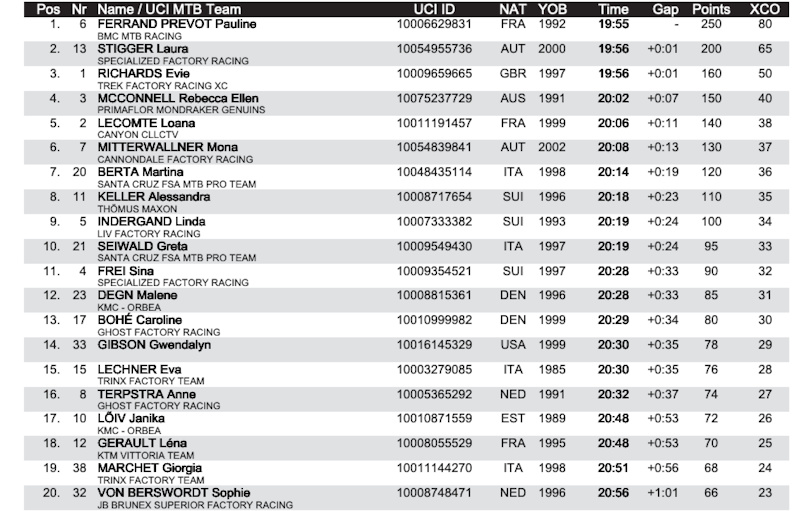 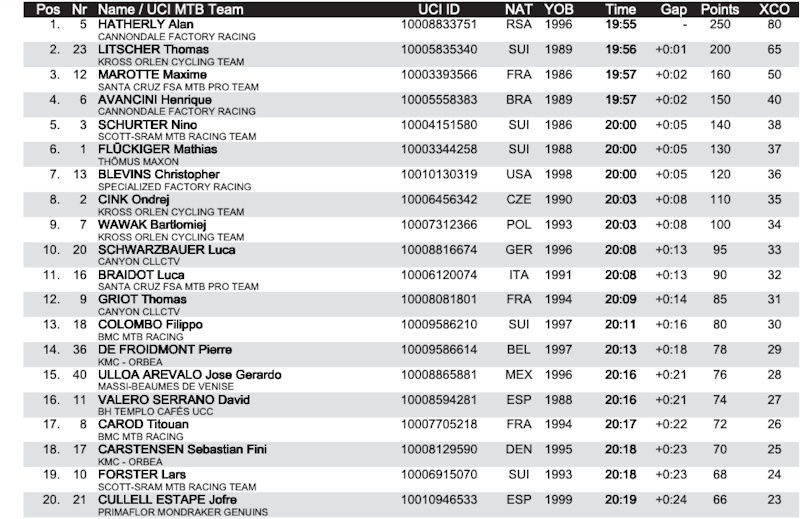 wilsonians (Apr 8, 2022 at 13:40)
* Purchased by Outside..."this will allow us to pursue bigger projects and improve on our already class leading mountain bike coverage and content!!".....XC fantasy disappears. Good work guys, you're confirming exactly what all the naysayers said you would do.

kookseverywhere (Apr 8, 2022 at 16:21)
how dare you say something negative about outside, gonna get banned by brian

ryansimonovich (Apr 8, 2022 at 17:12)
There's the chance that not enough people played to justify the cost/effort. Pure speculation though

taprider (Apr 8, 2022 at 18:05)
the Photo of the Year (POTY) didn't appear this year either. Next year the Enduro Academy and the Field Test Huck to Flat will be cut. And everything will be behind the BETA paywall where there is no Comments feature (so we have to get all our snarky comments in while we can)

ichabodchain (Apr 8, 2022 at 22:40)
The racing coverage could be so much better. They should see how Cycling News covers road racing, Cycling News is definitely the bench mark. It would be great to have MTB coverage at that depth.

knutspeed (Apr 8, 2022 at 13:42)
Agree. The RB team know better than to set up cams without knowing where the crowds will be. Rob & Bart not there is the giveaway I guess.

So many head-on angles where it was impossible to see who was in front. But the drone shot of Mathias' burst was cool.

ryansimonovich (Apr 8, 2022 at 17:11)
I didn't notice. People complain literally every race though so I'll take your comment with a grain of salt

Cerps (Apr 8, 2022 at 19:55)
Why they placed the camera to look at them coming under the pedestrian bridge in single file rather than down the big hill with the now rollable drop, into the tabletop, and the berm right before it baffles me.

Augustus-G (Apr 8, 2022 at 14:29)
Good to see Stigger back in form. She had a good start last year too but her lungs where problematic in the mid & late season. I was hoping Haley would finish better but after Cape Epic didn't expect it. Sina seemed a bit off today.

Good racing, cool little XCC Track. Coverage could have been better. Not quite up to the usual RB standards.
I wonder if it's because of the location or because this is their last year and they're phoning it in so to speak. ???

Willikers (Apr 8, 2022 at 15:27)
Haley is still young and building deep form, next step is snap. PFP was a beast and looked unrecognizable on the final descent, sending it with clearly much more speed than either Evie or Laura. Full marks to Ravanel for that.

juuro (Apr 8, 2022 at 17:33)
@Willikers: Yeah, Pauline was different. Also that smirk on the finishing straight was a next level boss move.

Willikers (Apr 9, 2022 at 8:16)
@PapaStone: just a guess - she has a lot more miles in her legs and a kind of deep reserve some younger riders don't have yet.
From what I can tell she has a pretty dialed recovery team / program as well.
All comes from lots of experience.
What I like is she's still getting better.

The-Foiling-Optimist (Apr 8, 2022 at 13:42)
If you're doing well in fantasy BMX it's probably because you have strong knowledge of the field and current and forecastable athlete performance. That almost certainly means you have a BMX background.

Bomadics (Apr 8, 2022 at 15:01)
@The-Foiling-Optimist: I think our community is at the stage we can have an all inclusive acronym, how about BMXDHXCSSFRE or bimdicksfree phonetically!

SteveMcDonald2 (Apr 8, 2022 at 17:40)
Her bike was all over the place at the end of the race. She didn't look to be able to hook up all that power she has. Tyres looked alright. Maybe some other issue?

Jamminator (Apr 8, 2022 at 13:53)
Pretty interesting Avancini's Dad designed this weekend's course. Should be close race Sunday if he has same fitness level as today.