Video: The Vanzacs Have The Best Time on a New Zealand Road Trip in 'Hedonism'

Words by Tom Booker, the Vanzacs

With being told to stay put and almost everyone’s plans being cancelled - 2020 has been a year of disappointment and uncertainty for many. But a lucky little country called New Zealand managed to dodge the COVID bullet and allow its residents free reign to explore its shores this summer. The STATUS MTB crew consisting of Jacob O’Donoghue-Price, Jared Gover, Matt Begg & Dave McMillan took full advantage of this freedom and decided to embark on a little road trip through the guts of the country.

This film is what happens when you cram 10 bikes and five guys with no plan into one Hiace van over 13 days. You end up with 2500kms of rubber burned, bodies battered and bruised, untold numbers of berms destroyed, whips swung and good times had. 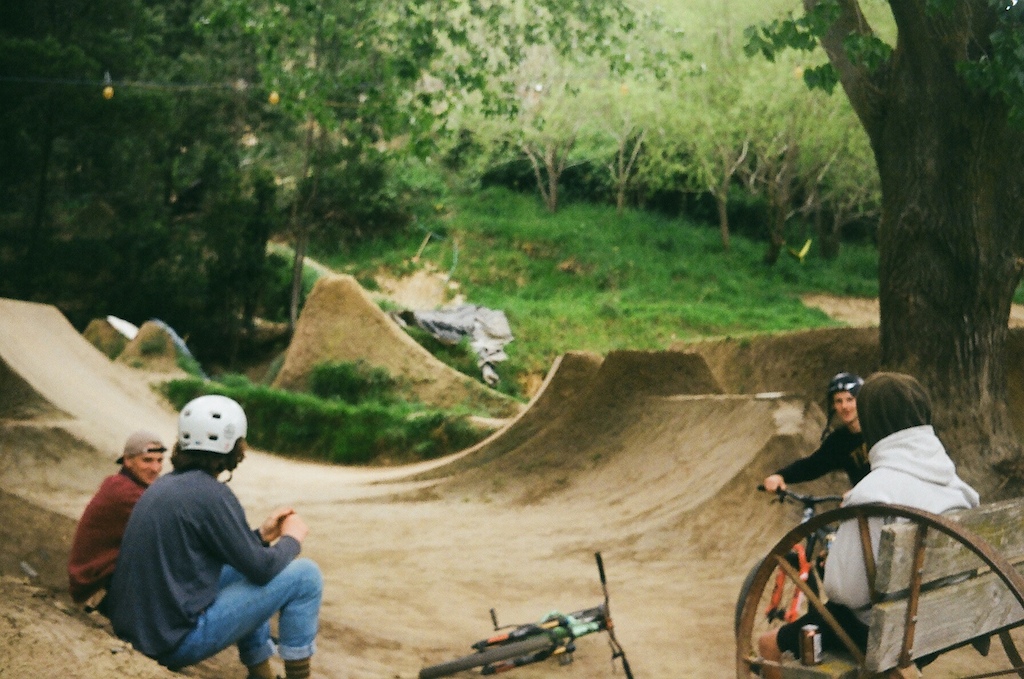 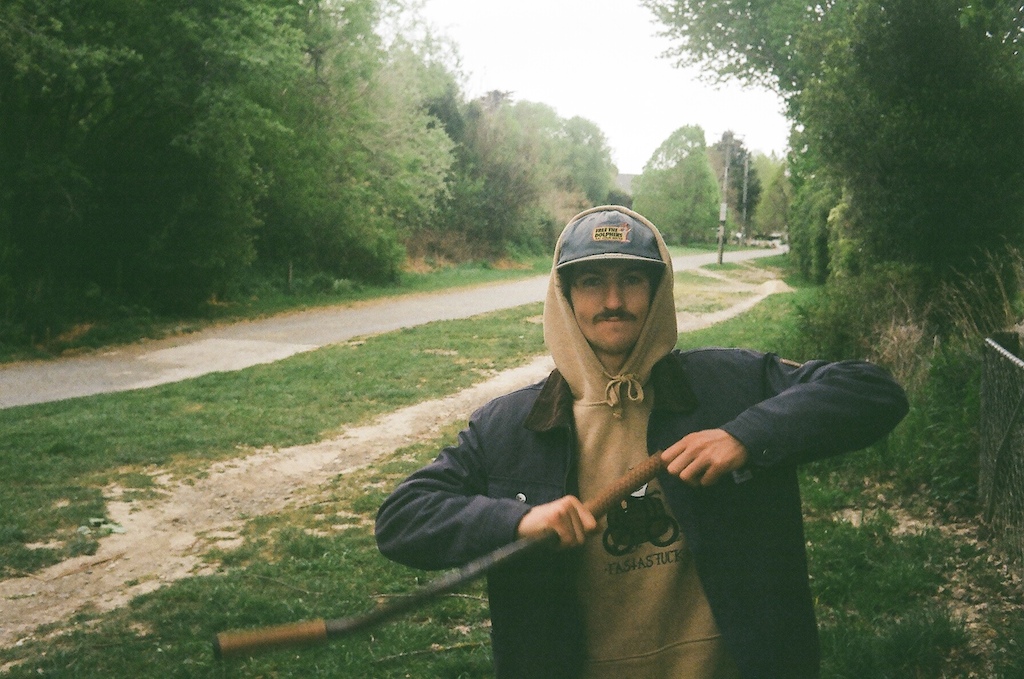 With the weather forecast looking uncertain in the days leading up to departure, we decided to scrap any plan and instead follow the sunshine up and down the country as best we could. Leaving from our base in Queenstown we drove east to Matt’s hometown of Christchurch and met up with Billy Meaclem and the Vale crew to ride their local dirt jumps and big bike booters nestled away in the woods of Port Hills. 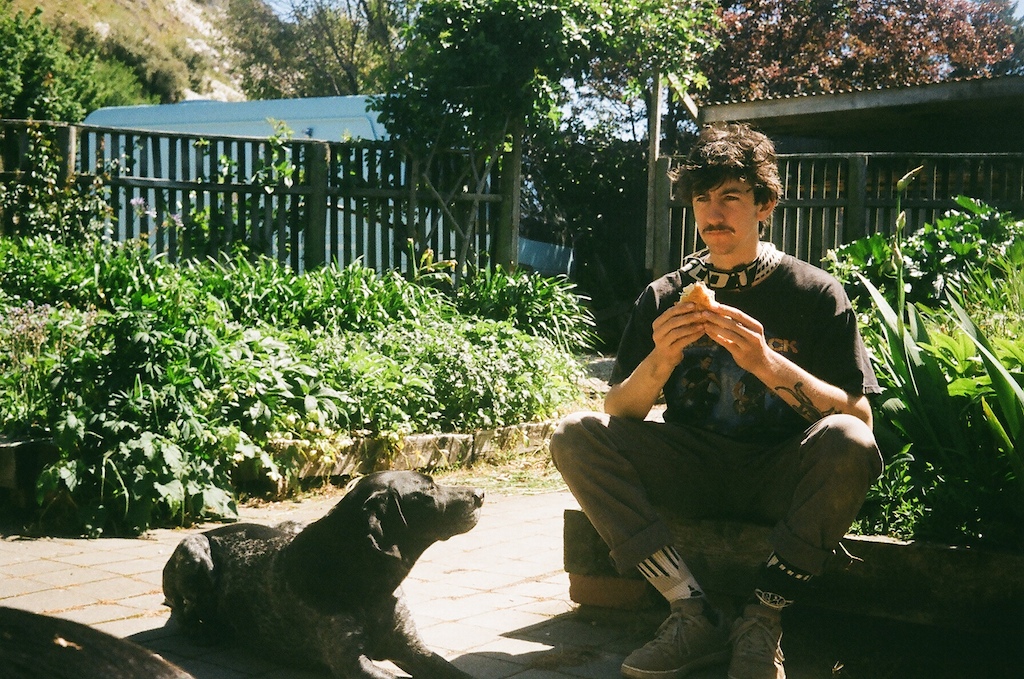 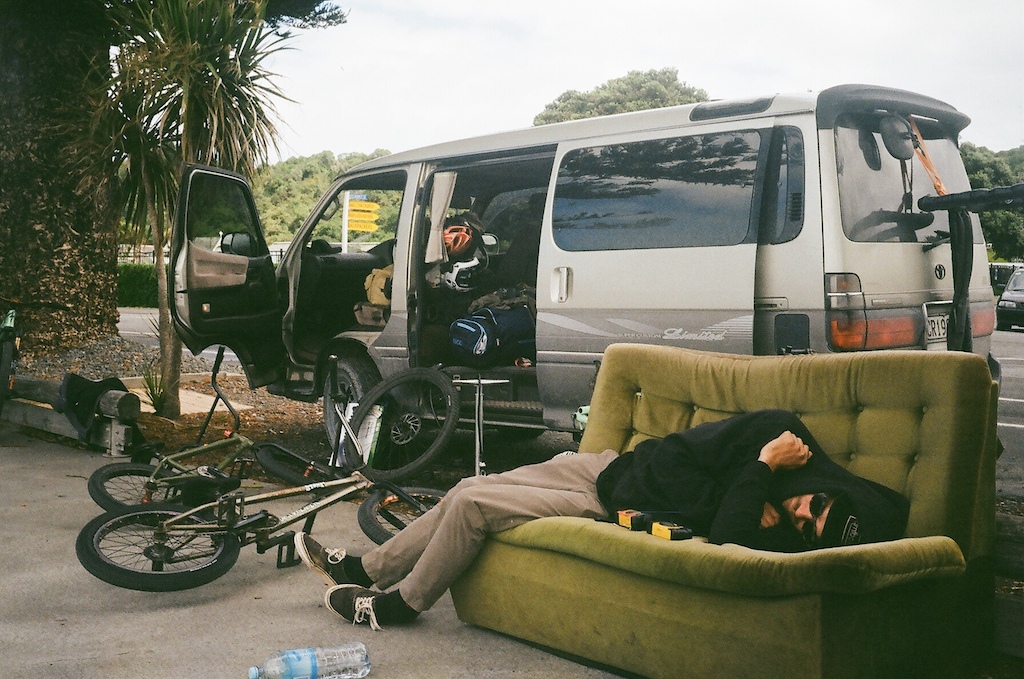 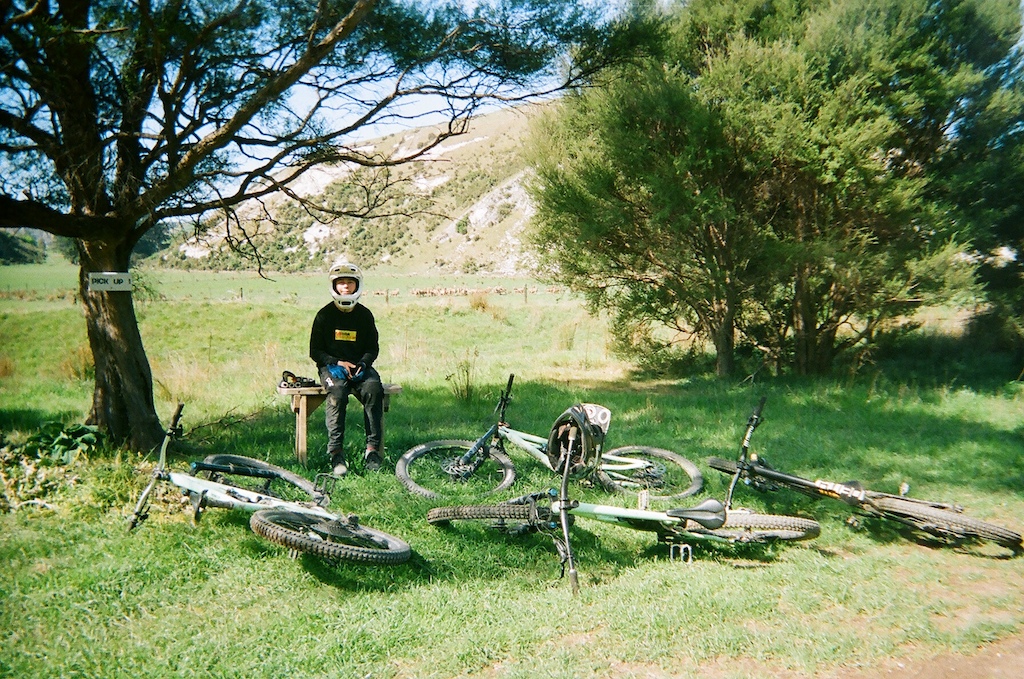 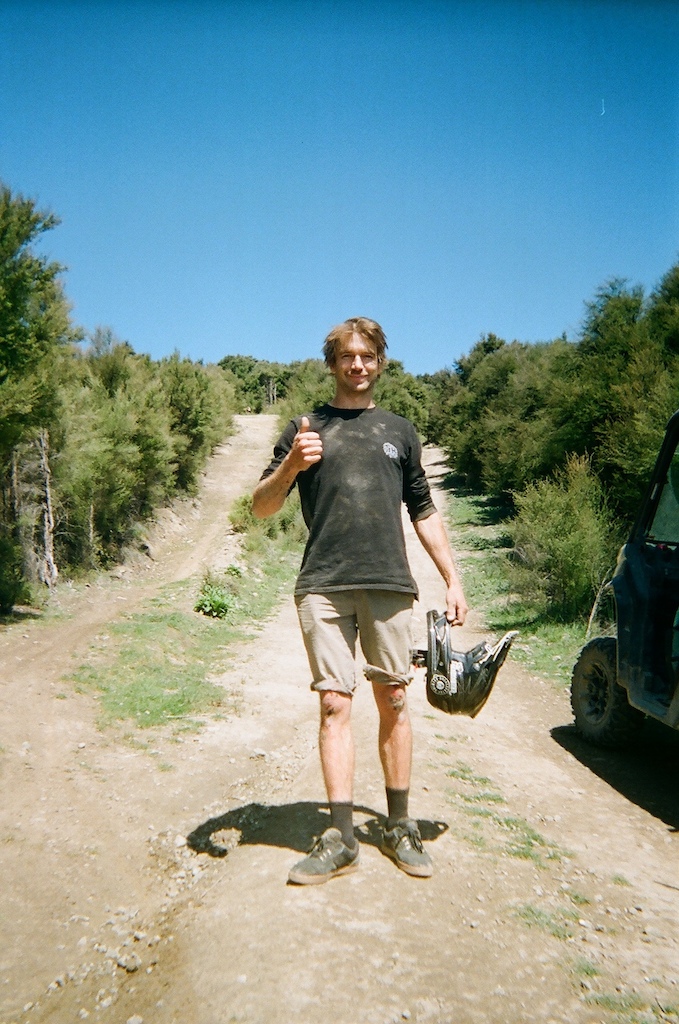 With the cobwebs shaken off, we continued up the east coast towards Kaikoura. A beautiful town where the mountains meet the sea - and famous as a popular destination for whale watching and fish and chip shops. Kaikoura is also quickly gaining recognition as having one of the best bike parks in the country.

Middle Hill bike park is owned and operated by G & Morgs - A local farming family who turned their regenerating farm land into a shuttle access trail network. It had everything we were looking for - big jumps, hooking corners and a laid back vibe with great hospitality. All within a 5 minute drive to the beach! After a day and a half of flat out riding we only just scratched the surface of what’s there. 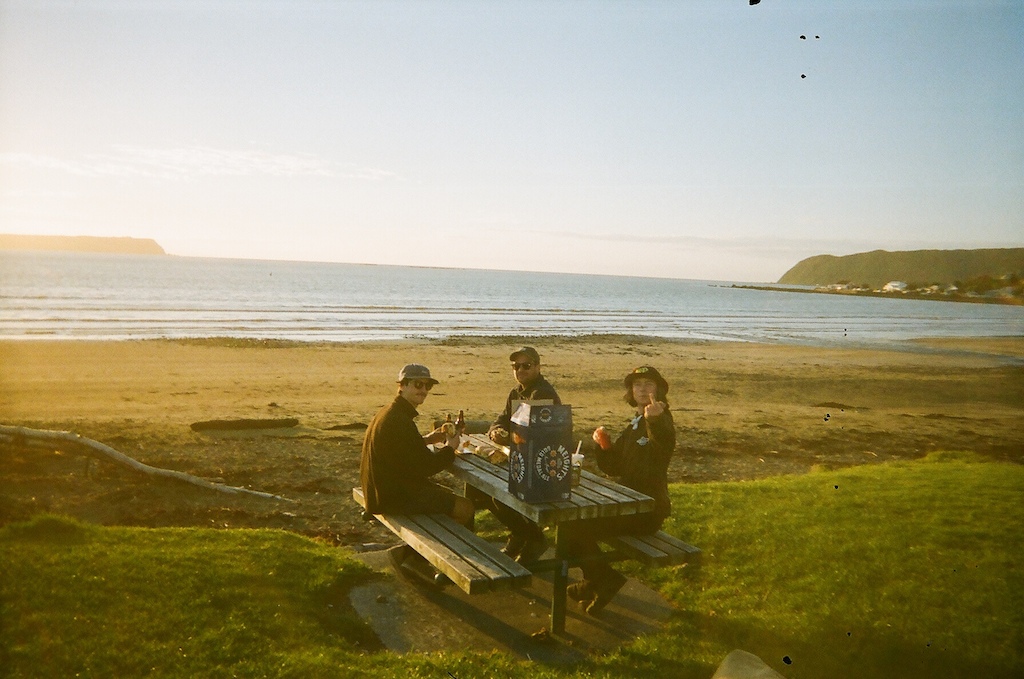 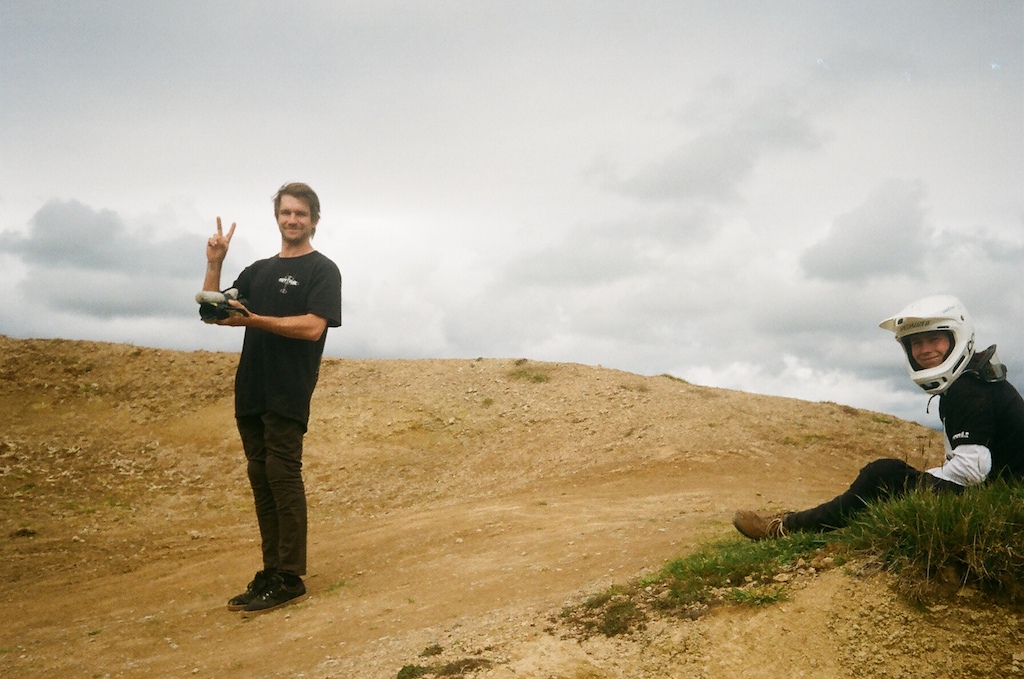 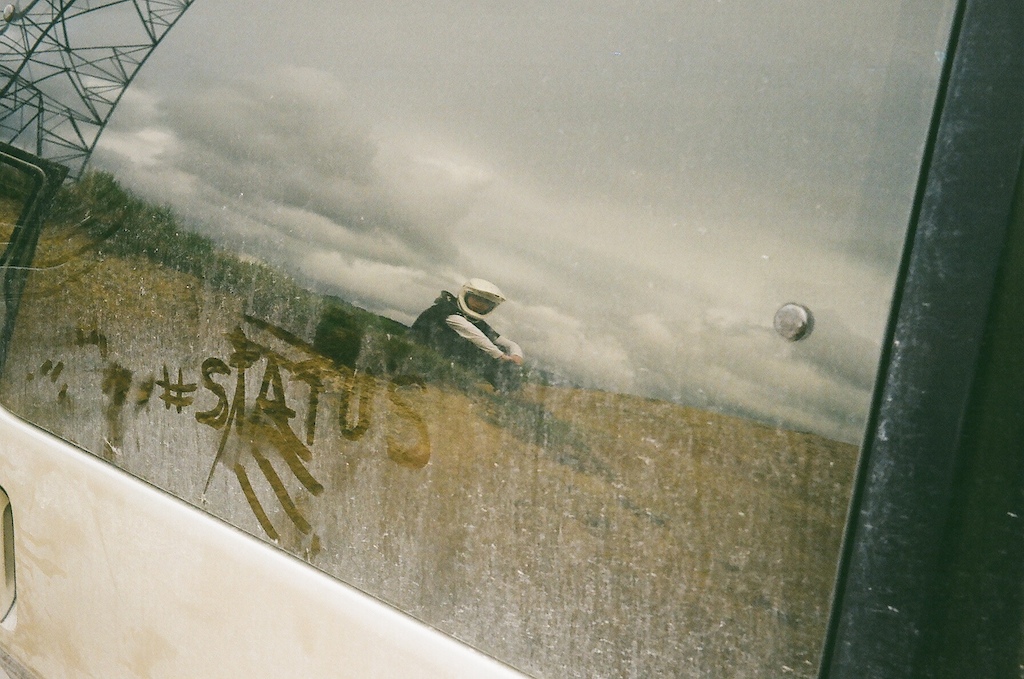 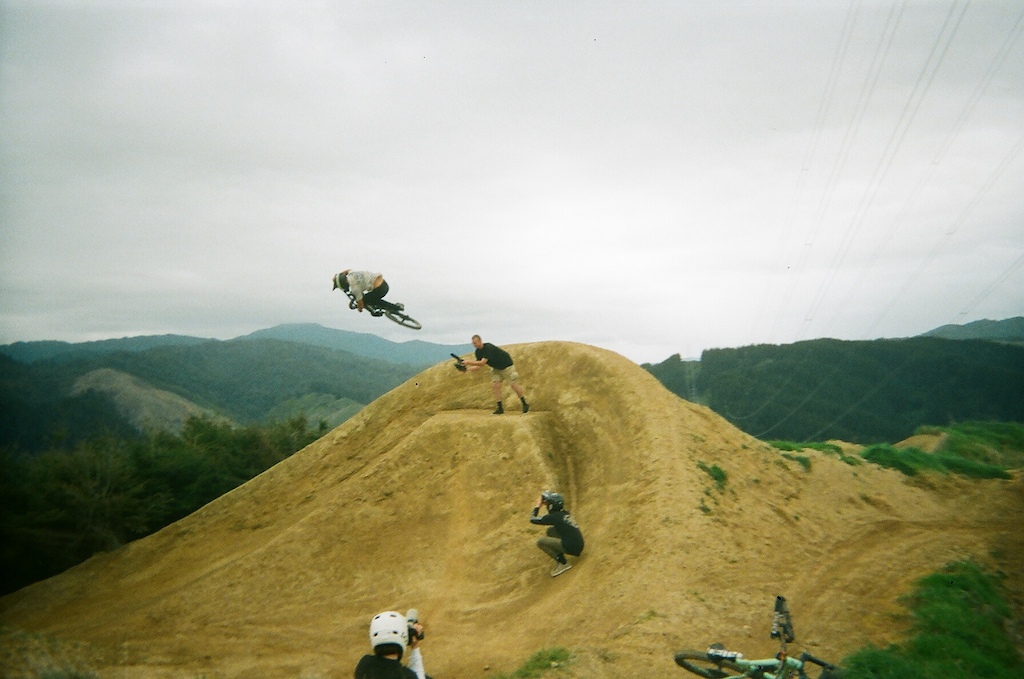 A short ferry ride across the cook strait brought us out of the South Island and landed us in the ‘windy city’ of Wellington. The weather lived up to the name of the town and it even threw in some rain for us as well. We were lucky to get a couple of epic jib sessions in with some of the local riders and witness an epic sunset eating maccas on the beach during the breaks in the weather. The downtime bought us some well needed R&R before we headed to our next destination.

Dirt Farm was our furthest away destination before we turned back south. An hour north of Wellington and with a reputation for big and creative features that preceded itself we were racing to get there . As massive frothers of all things jumps we were left starstruck when faced with a hillside covered in perfectly crafted features and lips. It truly was the perfect playground. All the boys threw down and came away with grins from ear to ear. 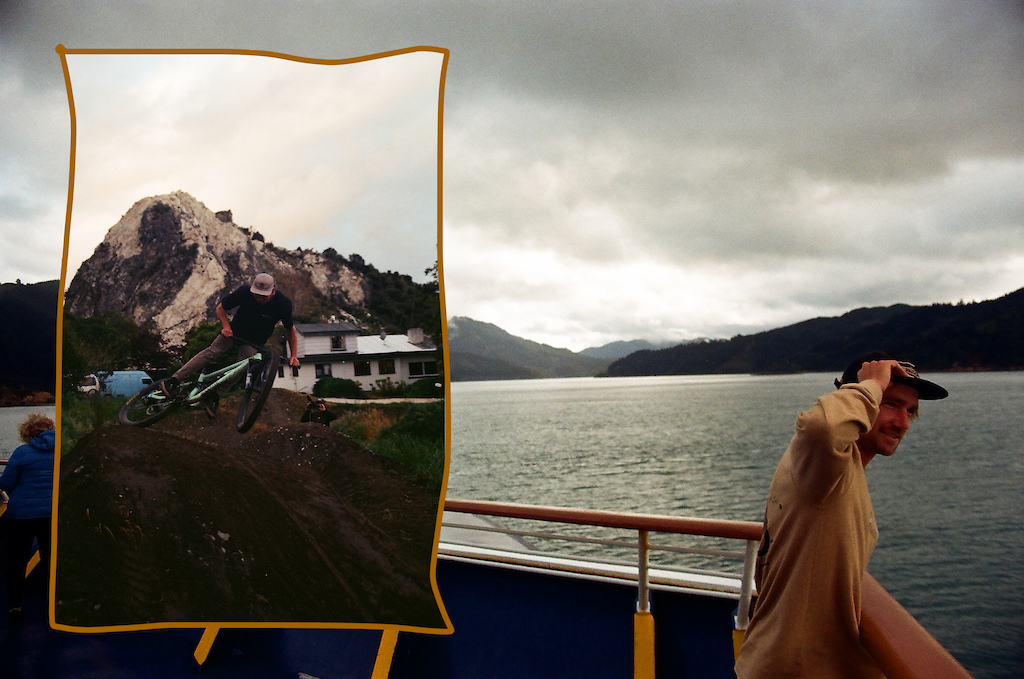 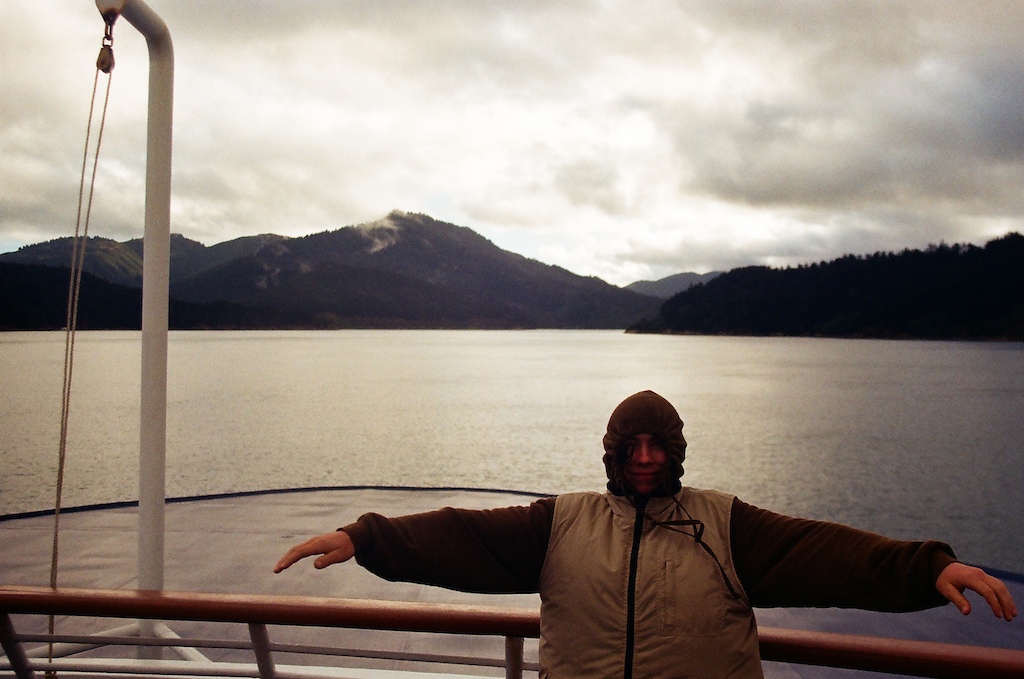 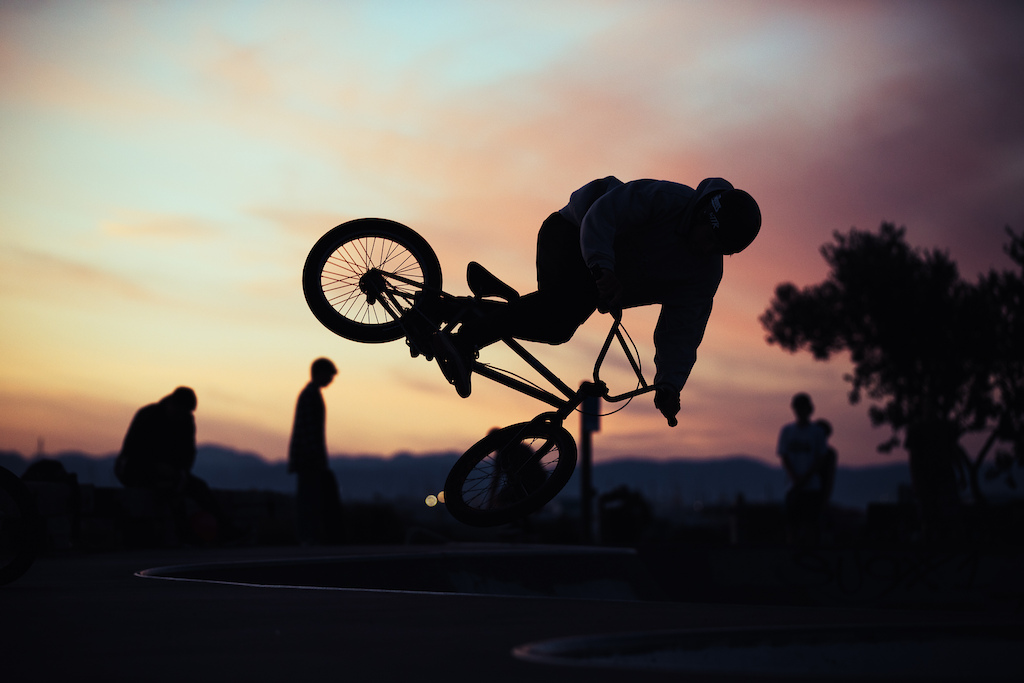 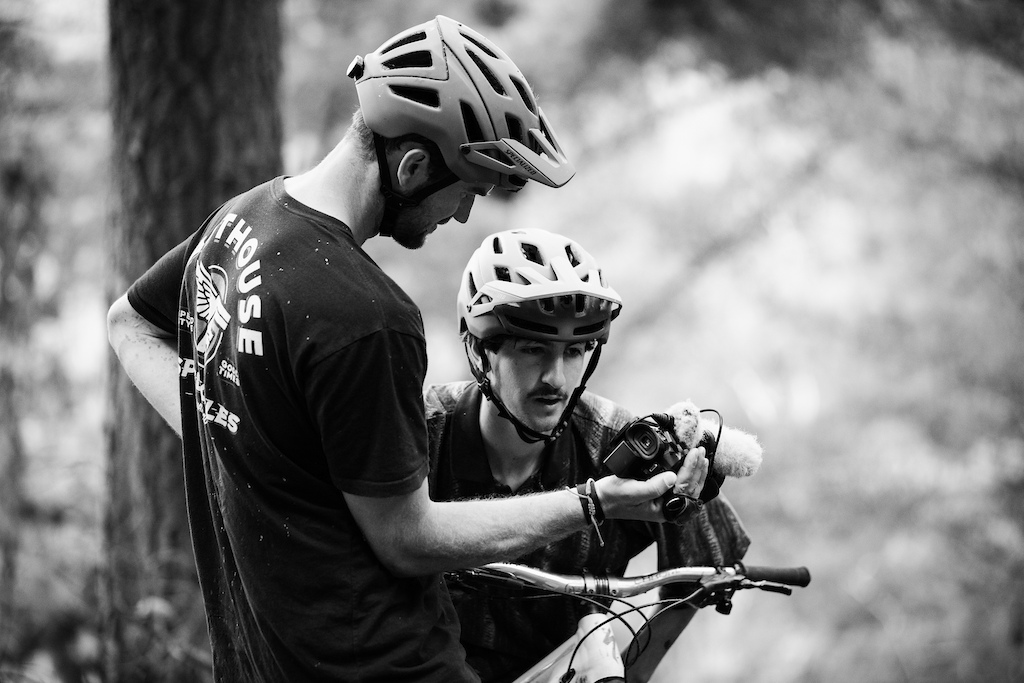 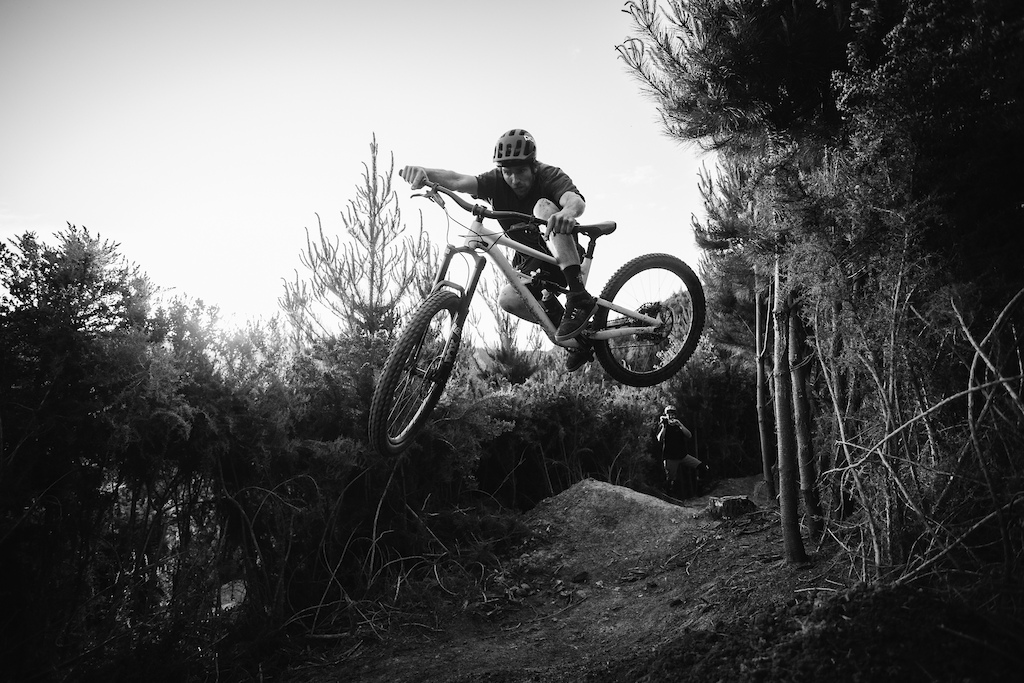 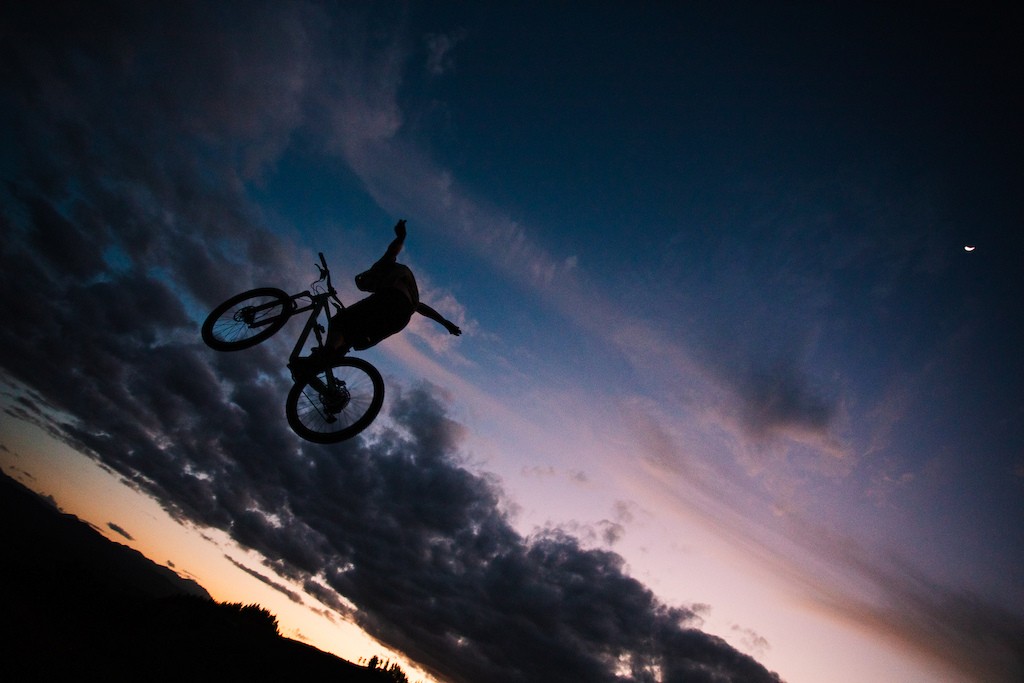 Another scenic ferry ride and a short drive south we made it to Nelson - our longest stay of the trip. By this point we were all feeling the effects of 10 solid days riding, but were committed to making the most of our time there. With photographer Henry Jaine as our local guide and media man, he took us under his wing and showed us the best skateparks, the epic pine-needle loam and redwoods trails, and the best vegan dining Nelson has to offer. We showed him KFC.

To cap off our last day’s riding in Nelson before we made the long voyage back to Queenstown. Henry took us out to local ripper Sam Todd’s house where he supposedly had some treats tucked away on his neighbour’s farmland. First Sam showed us a short jumps and corners track had built through Gorse over lockdown (hats off). The flow on this track was unreal and the corners hooked like nothing else. As the sun set we moved further up the hill where Sam had a monster kicker dug into the side of a ridge. There were some nerves rolling up to this one, but once the speed was down the boys were in full flair. Matt Begg threw a massive suicide no hander over the jump to end the session and trip with a bang. 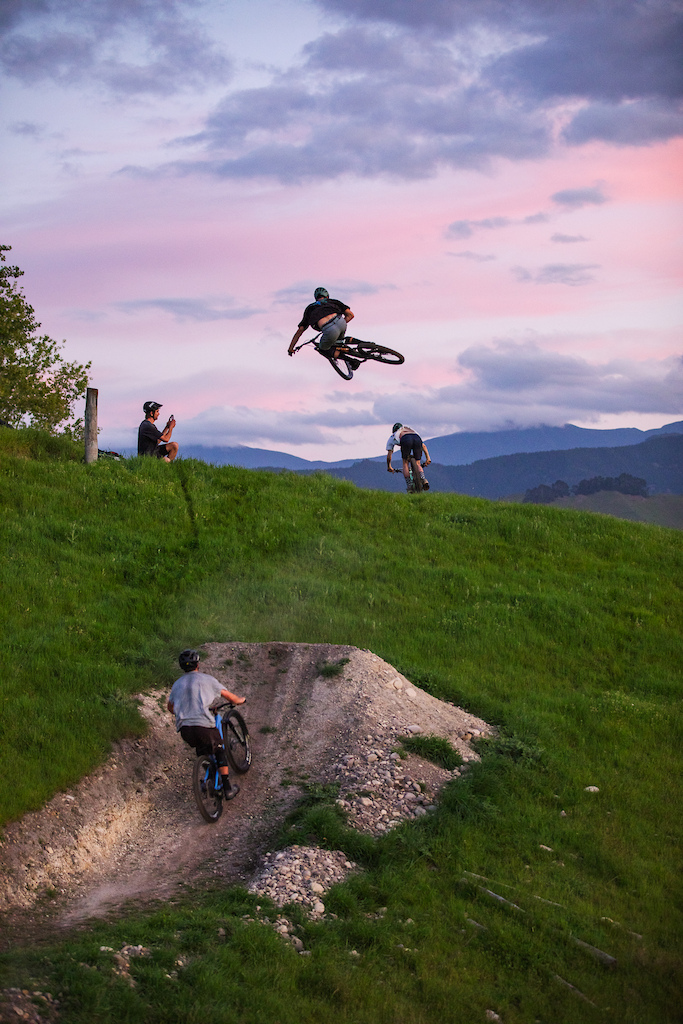 If a few aches and pains, a broken chain, a flat van tire, zero squabbles, endless laughs and memories is what stands between us and the next trip then sign us up, we’re ready for another!
#STATUSMTB
Massive thanks to
Dirt Farm
Middle Hill

getonyourbike (Jan 5, 2021 at 1:49)
Video and edit is great but my highlight is seeing that even a really good rider like McMillian can't make the Status look comfortable cornering, with the stubby rear end and long FC. Also three different clips of riders crashing when the front wheel washes unexpectedly. Called it when I saw the geometry and I stand by it.

purplegorillaz (Jan 5, 2021 at 3:30)
Can you explain why the geometry causes this loose front end (I have been trying to understand a bit more the effect of the geometry on the ride lately) ?

getonyourbike (Jan 5, 2021 at 4:13)
@purplegorillaz: The heart of the matter is that you can calculate the ratio of front centre to rear centre (cs length) for any bike and this ratio gives you a picture of the amount of force on each tyre contact patch when the rider is standing on the bike with all their weight through the bottom bracket. Slack head angles, long reaches and short chainstays give you a larger number, especially on the larger frame sizes. The larger the FC:RC ratio, the more force goes through the rear contact patch, and correspondingly, less through the front. Force through the contact patch is proportional to grip. Therefore, the larger the FC:RC ratio, the harder the rider has to work to get front wheel grip by moving their weight forwards and consciously putting weight through the bars. This is an inefficient way to ride, and more fatiguing as your arms are a smaller muscle group and weaker than your legs. Think that covers it.

mustbike (Jan 5, 2021 at 14:47)
As someone with an extremely forward weight bias, sounds perfect haha