Nov 18, 2013 at 2:50
by Scott Secco
Tweet
Live To Ride - Blake Samson's Day at the Beach: After months of digging Blake Samson invited the Live To Ride team down to shoot his epic spot on the Isle of Wight. After shredding for two days straight with unimaginable October weather we're all stoked with how it came out. Special thanks to Animal Clothing and Saracen Bikes.

Live To Ride - Blake Samsons Day at the Beach

Fall Back: Ridden, filmed, and edited by Matt Slager. Decided to forget the skatepark and get to some singletrack before the season was over.

Simon Silver - Out Of Bounds: When every trail and dirt jump has been filmed in your city, what else is there to do? This video explores that question, from Flowing Dirt Jumps to Ripping a Trail!

Behing the scenes of "Postal Crew": The Postal Crew is: Tyler McCaul, Cam McCaul, Greg Watts, and Alex Reveles. Made a cable cam for $30 that was propelled by a fishin rod along with some funky homemade helmet mounts and downloaded a trial version of Adobe Premier to edit this footage on. We didn't have a $15,000 helicopter, a remote controlled cable cam, microphones, or a legit film crew to help us make this thing, but we made due with what we had. Iggy Pop rules, and partyin is fun. Vote 4 Pedro.

Behing the scenes of "Postal Crew"

Sid Slotegraaf - 2013: This summer was the best one I've ever had. It began with adventures in New Zealand that included racing and a slopestyle competition. I raced the Canadian National round, two World Cups, and World Champs. I love riding bikes, I hope you enjoy the video I made. Song: Buck 65 - Wicked and Weird.

A Weekend in Wales: Have you ever wondered how to spend a weekend MTB'ing in Wales? A few months ago OJ decided it was about time to go on a mini road trip. The aim of the trip? To try and hit as many unknown and hidden gems around North and mid-Wales as was possible in just two very short days. A Will Sanders Production.

A weekend in Wales

Roberto Bonometti - My Life: Roberto, a young 14 year old rider out of NH shreds Highland Bike Park. Roberto makes the trip up to Highland every weekend to improve his skills and make a name for himself. 'Burto' as all of the other young groms call him has been riding since he was 7-years-old and it's obvious that he loves the sport.

Ben Schleith - 2013: I had so much fun riding my bike this year and I would like to thank Chromag for supporting me all season. Enjoy.

Sicklas and his Demons: I finally managed to wrap up my 2013 season with this edit! I filmed three days in Autumn at our spot, because an injury kept me from doing it earlier. I also added some footage of competitions I attended. Filmed by the coolest friends and girlfriend in the world. Song: Fiddlers Green - Victor and His Demons.

In Front Of The Lens - Urban Segment: Video: Thomas Rigardcerison.

In Front Of The Lens - Urban part


Vito Sport Experience Day: Dan and Rachel Atherton: Mercedes-Benz Vito Sport hosted the Experience Day with Atherton Racing at BikePark Wales on 25th October 2013. Fun was had by all.


Just ride it - Oli Dorn: Before the winter arrived we went to Leogang and captured these last shots of the 2013 season. This is our first edit we have made together. Stay tuned for our next project in 2014! Video: David Kullack.

Just ride it - Oli Dorn from David Kullack on Vimeo.

Richie Eisler in Canada: Throwing down.


Ken Block's Gymkhana 6 - Need For Speed: Wonder how many tires he went through while shooting this?


JP Auclair & Tom Wallisch - ''Into the Mind'' Street Segment: Perhaps JP fell asleep on that "Uphill" Bus, and had something of a nightmare. Now he's charging down midnight streets, chased by a spotlight: the gaze of the dreamer. As if in the gutters of the mind, he is surrounded by symbols of the dream world, fears and memories that come in the form of projections. When JP encounters a challenging obstacle, he is outstaged by a younger and more capable athlete. Enter Tom Wallisch, one of the worlds most prolific freestyle skiers and an Olympic hopeful for Sochi 2014. Though the chase now seems to be between Tom and JP, at the end of the segment we meet the dreamer themselves, the spotlight that has been following them. The dreamer hurtles past JP and Tom, towards a potentially fatal life decision. Watch the feature film to see what happens next...

JP Auclair & Tom Wallisch Street Segment (from INTO THE MIND) from Sherpas Cinema on Vimeo.

The Explorer: This might be the best video we've seen this year. Love it. 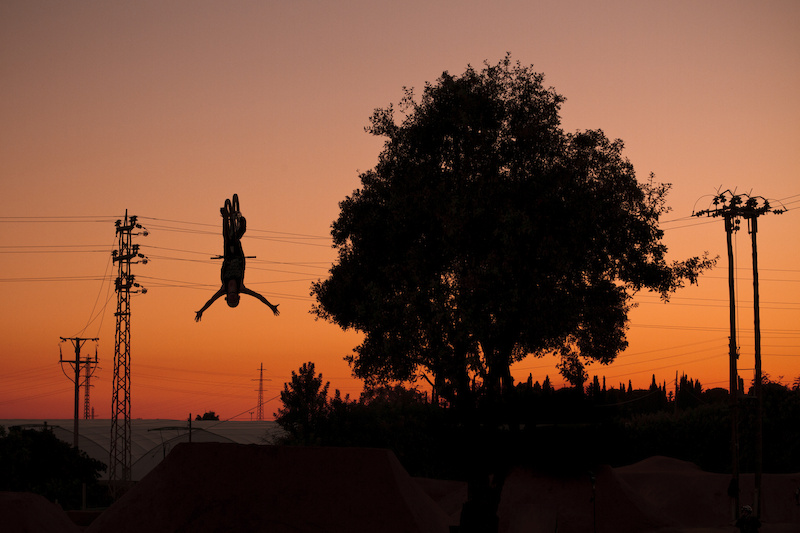 gavlaa (Nov 18, 2013 at 5:02)
Gymkhana 6 is like Police Academy 6- flogging a dead horse really now isn't he? Don't get me wrong, Block is one hell of a driver but there's only so many times you can donut a fiesta before it gets a bit repetitive!

everardo (Nov 18, 2013 at 21:14)
Stupid bread pushers! We always had to fight those fools at the skatepark. Roller Blading is for clowns!

hoolydooly (Nov 18, 2013 at 3:27)
That whole Into The Mind film was awesome. I highly recommend it. Its really made me have second thoughts about being a hero when in wilderness areas!

scott-townes (Nov 18, 2013 at 17:51)
If you like watching cute little editing and camera tricks, then yes this is the film for you. If you're a fan of SKIING, there are so many better options out there. Don't be fooled, this film is nothing like Life Cycles probably because they tried way too hard. It's just a bunch of cheap visuals of which almost all of them make no sense (like that eagle projected onto the wall), cool heli shots of mountains and about 2 minutes of skiing throughout the whole thing... A large portion of the ski community feels the same way.

captyvatemedia (Nov 18, 2013 at 21:11)
Sherpas are experimental and they absolutely kill it at what they do. They have a whole bunch of accolades to back up their talent, and I doubt it would be cheap to pull of what they go about producing.

scott-townes (Nov 19, 2013 at 4:50)
You can call it what you want and these guys could have all the accolades in the world, it still doesn't change the fact that they made a horrible ski movie. Life Cycles = insane riding accented by really cool filming, editing and direction. Into the Mind = a bunch of editing tricks and senseless effects accented by a few quick shots of someone on skis doing something 90% of skiers could do. That's not a ski movie, that's filmmakers jacking off to their own stuff.

bardsley123 (Nov 19, 2013 at 12:45)
Anyone who has taken any film classes would recognize the insane amount of work that went into to filming that section. Both the sound and lighting design was absolutely incredible. Much respect for Sherpa Cinema.

rippersub (Nov 19, 2013 at 20:57)
The cinematography can be whatever it wants. It's still a garbage SKI movie. I turned it off before it was even done it was that bad.

bigandybikes (Nov 19, 2013 at 21:16)
To those that hate the movie: Skiing is not about big airs and tricks or the terrain park, skiing is more then just carving down a hill, it involves nature and hiking up the mountain and heli rides. The movie showed skiing for what it really is and did it in a really epic way. So stop complaining about all the cinematography shit and watch things like salomon freeski tv instead.

rippersub (Nov 19, 2013 at 21:54)
Skiing is the act of sliding down a snow covered hill on 2 sticks, which was completely absent from that movie. For 95% of people skiing is nothing like what is in that movie. Rarely do eagles swoop me while out on the runs.

bigandybikes (Nov 19, 2013 at 22:09)
So why are you complaining about it on a mtb website? They aren't going to change the movie for some a*shole who thinks it sucks cause there isn't enough skiing in it for his liking.

scott-townes (Nov 20, 2013 at 4:53)
Andrew- It was an URBAN segment... you obviously don't get the concept of what a ski movie is but normally ski movies do include "big airs and tricks" because just like in any other action sport, you pay for movies to be impressed by SKIING not by projections of eagles onto walls. And it's called expressing an opinion... you look like an angry fanboy with reactions like that to someone's opinion about a ski movie that does have a severe lack in actual skiing content (we're not complaining about the cinematography, bud). That's almost as mind boggling as having an urban seggy with virtually no urban.

matjtom90 (Nov 18, 2013 at 8:53)
Fall Back by Matt Slager was really cool, especially for being self filmed and edited. Awesome tunes too.

mtnryder56 (Nov 18, 2013 at 8:31)
The North Face video was inspiring, and so was seeing the Athertons out riding with normal joes spreading the stoke!

flowyridestilltherestofmylife (Nov 18, 2013 at 23:36)
I must disagree..
Below threshold threads are hidden

NYShred (Nov 18, 2013 at 16:18)
I cant even express how disappointed I am to see you guys here talking smack about blading. I thought this forum had a mature culture but I guess you're going to find those ignorant closed-minded posers everywhere, including here. Just remember, your sport just made it to the Xgames while blading is 20+ years deep. Youre pretty late to the party, clowns.