Oct 9, 2022 at 23:00
by Scott Secco
Share
Tweet
9 Comments
Steps to the Top - Brandon Semenuk At Red Bull Rampage: Brandon Semenuk’s journey as a cyclist has been one of exploration and innovation. He continues to melt all expectations of what’s even possible on a mountain bike, while pushing the boundaries of freeriding, slopestyle, dirt jumping, and trail riding. As a creative force, everything he puts down is pragmatic, enchanting, and done with intent, leaving his fans and other competing athletes in awe. Brandon’s biggest moments in mountain biking have come from his ability to combine technical riding innovation, with his own conceptual creativity and athletic prowess. His process often goes unseen, but the results continue to inspire us.

Gee Atheron - Ridgeline II - The Return: “There is nobody on this planet like Gee Atherton” - Rob Warner, Red Bull Hardline 2022. World downhill champion Gee Atherton has always ridden at the very limit of what is possible on a bike. It’s his can-do attitude and the crazy locations that Gee sees as an irresistible personal challenge that have enabled him to push the boundaries of the sport time and time again. Gee’s daring is world famous and in recent years millions have enjoyed spectacular edits such as The Ridgeline and the Slate line, but the risks involved in these “Big Mountain” projects are horrific. In June 2021 when filming “The Knife Edge” Gee had a horrendous crash with a huge list of injuries… Gee's recovery was a long process with no guarantees that he would ride again but the thought of “the new Ridgeline” (built way back in 2021 before his horrible accident) was a huge motivation. Gee said “I have to admit the first day up on the new ridge was challenging, I’d been riding chilled bike park laps and suddenly I was back at the top of a ridge with all the knowledge of what had gone before. But I do these projects purely because I love it. I’ve always enjoyed that creative side,.. the freedom to build things as hard as you want. There are no boundaries, and I always end up making them a little bit harder than I should. As soon as I dropped in I was back where I belong"

Andreu Lacondeguy - Peroots: "It's been a few years since we planned a trip to South America. I wanted to take my bike to a different place, get out of the routine and explore, since I think that's the definition of our sport. The red dirt was perfect, I was riding lines that gave me a feeling I had never felt on a bike before. The length of the lines made me feel like I was skiing or snowboarding. That’s something I've been looking to do for many years, and I was finally able to do it here by making long turns on a steep virgin slope. This trip to Peru was the best experience of my life, not only for riding which was without a doubt the best thing I've ever done, but also because I got to know a wonderful country full of amazing people! From my point of view, this is what we need in mountain biking, more exploring, more big mountains, more freeriding!" - Andreu Lacondeguy

A Mission To Change Cycling - Justin Williams & L39ION: Justin Williams has spent virtually his entire life in the world of competitive cycling. Growing up in Los Angeles, the 33-year-old's experience and introduction to the sport was far different from his peers who may have grown up overseas in Europe, especially when representation in the sport has been challenging. “This documentary is the journey of me going so far beyond myself and pushing so far past what's reasonable that my season gets worse and worse and worse and worse. And even through all of that, I found a way to enjoy it.”- Justin Williams

Underexposed - Mad River Valley, VT: The Mad River Valley is a lot of things packed into a narrow valley nestled against the spine of the Green Mountains. It’s a stunning and natural playground that offers world class pursuits for any number of outdoor enthusiasts. It’s also a quaint and picturesque community of artists and artisans. For those looking to put rubber to dirt, it’s more than an incredible collection of trails scattered throughout some of Vermont’s most ethereal forests: it’s also a shining example of advocacy and stewardship epitomized.

A Day In Whistler With Johny Salido: Looks fun.

Kilian Roth - Check: It's hard to describe just how good this new Kilian Roth part from Vans BMX is, Kilian’s technical riding style and his eye for straight-up MASSIVE set-ups balances this part out. Amazing riding with Rich Forne behind the lens, You already know this is a banger. So stop reading this and hit play!

The Cliché Crew - Breaking Stereotypes In Women's BMX: "We started the Cliché Project because we realized that there are no videos that are completely done by girls. So we wanted to change that and create something that we can be proud of and represents BMX in our opinion. The name "Cliché“ came into our minds because on one hand, there are many stereotypes in women's BMX we want to break with this video project. On the other hand, we want to create a solid BMX video that fits the stereotypes of a street video. We went on two trips. For the first one we went to Barcelona for ten days in February and for the second one we went to Germany in July. The first few days we spent in Hannover and the rest of the trip in Cologne. Most of us met for the first time in Barca but everyone immediately got along really well. It was a new experience to go street riding with a bunch of girls and it was really cool to see how every girl got out of her comfort zone and pushed her limits. Besides riding we made a bunch of good memories being seven girls in a two bedroom apartment. Cooking together, watching the clips we filmed, talking, annoying each other, dancing, and just enjoying each other's company.

Dennis Enarson - Down The Street: For Dennis Enarson life must be a busy blur of airports and hotels so it must be nice to have had a bit of a break and hit some hometown spots all within riding distance from the house. Doeby Huynh has been out with him for the pedal and captured just under three minutes of typically hefty Enarson clips. Dude's a beast.

Tony Hawk Breaks Down The Worst Injury Of His Career: Injury: it happens to the best of 'em. Tony Hawk is the best of 'em, and he tells you about the worst slam he endured in today's video.

How Trail Designers Build Good Hikes: Designing a hiking trail seems simple enough: It has to take a person from A to B, pass through scenic nature, and last through years of wear and tear. And for most of human history, trails did that without much intentional design at all. But as trails shifted from essential transportation to a recreational destination, the way we make them did, too. Now, hidden in every trail is a carefully made design language of angles, alignment, and materials that keep them enjoyable for generations. Watch our video to hear trail ecologist Jeffery Marion explain how these principles work — and why they’re more important now than ever.

Hávamál.: Join Ryan Callinan, Jack Freestone, Luana Silva, Anna Gudauskas and Chris Burkard on our latest journey to the Arctic Circle. Watch the crew explore the Scandinavian peninsula and venture deep into Norway’s countryside of mountains, fjords and glaciers, and score frigid but perfect waves in our latest Adventure Division film, ‘Hávamál.’ The surfers were greeted by raw, pumping conditions upon touchdown in Unstad – the birthpace of Norwegian surfing in the Lofoten Islands – now just a remote fishing zone with only 15 full-time inhabitants, once a critical region for the Nordic Vikings. Lead by veteran Scandinavian traveler and outdoor photographer/filmmaker, Chris Burkard, along with the two pioneers of the Norwegian surf community, Tommi and Marion, the crew had all the working knowledge required for a successful trip.

This is the Motherload - Ep. 4: As a parent carving out a few moments for yourself is often a monumental task. Follow along as professional skiers and mothers Tessa Treadway and Izzy Lynch embark on shipping their kids off and getting out the door (themselves) to reset with the very thing that inspired them to dedicate their lives to the mountains. Skiing is the foundation of their friendship and continues to fuel their desire to live adventurously despite the many obstacles that must be overcome on a daily basis to get out there.

The Fifty - A Rarely Skied Giant Of BC: Deep in the backcountry of the infamous Rogers Pass in British Columbia, Canada, lies a rarely skied beast of a line, the Comstock Couloir. This three thousand foot line is guarded by a full day's walk, multiple avalanche paths and aspects, glaciers, and a giant cornice that guards the top of the line like a gargoyle guarding its castle. Now throw in a year with as weird and challenging of weather as it gets and the Comstock gets even more challenging. Spanning a month of waiting, multiple weather shut downs, the kickoff line of the fourth year of The FIFTY proves to be a difficult line to check off the list for Cody Townsend and friends. 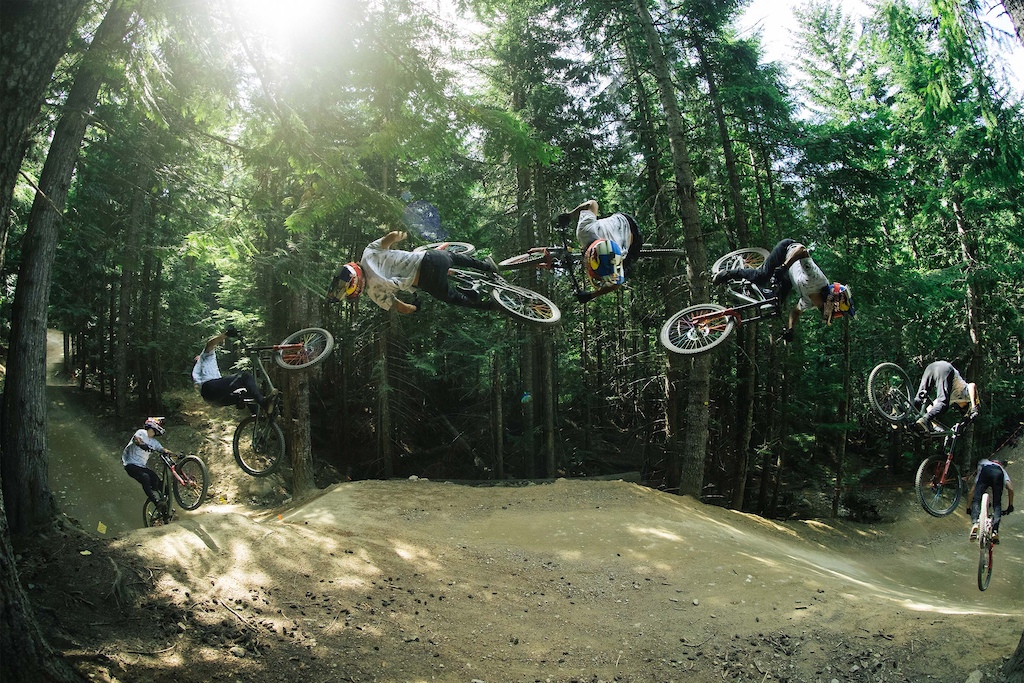 IMeasureStuff (Oct 10, 2022 at 4:31)
That Kilian Roth part is something else. That dude takes riding skinnies to an entirely different level of amazeballs-ness.

cedric-eveleigh (Oct 10, 2022 at 11:02)
That hiking trail design video is interesting. It's cool to see the numbers and concepts presented in a concise way.

HadrienButte (Oct 10, 2022 at 22:27)
I know I must be not cool for saying this, but why in the sweet cheeseballs does anyone doing the stuff that some of these people are doing not wear a helmet...