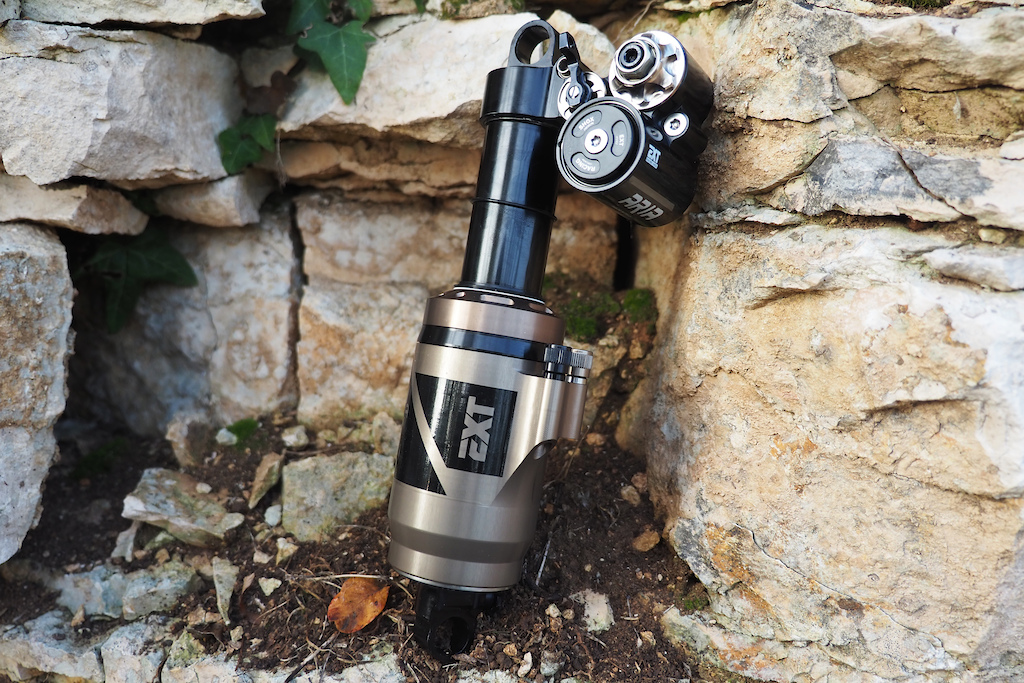 Yes, that's two air valves.
EXT have shared more details of their upcoming air shock (which we've spotted before). As an unexpected bonus, they're also releasing a longer-travel version of their lauded Era V2 fork, with 180 to 190 mm of travel. 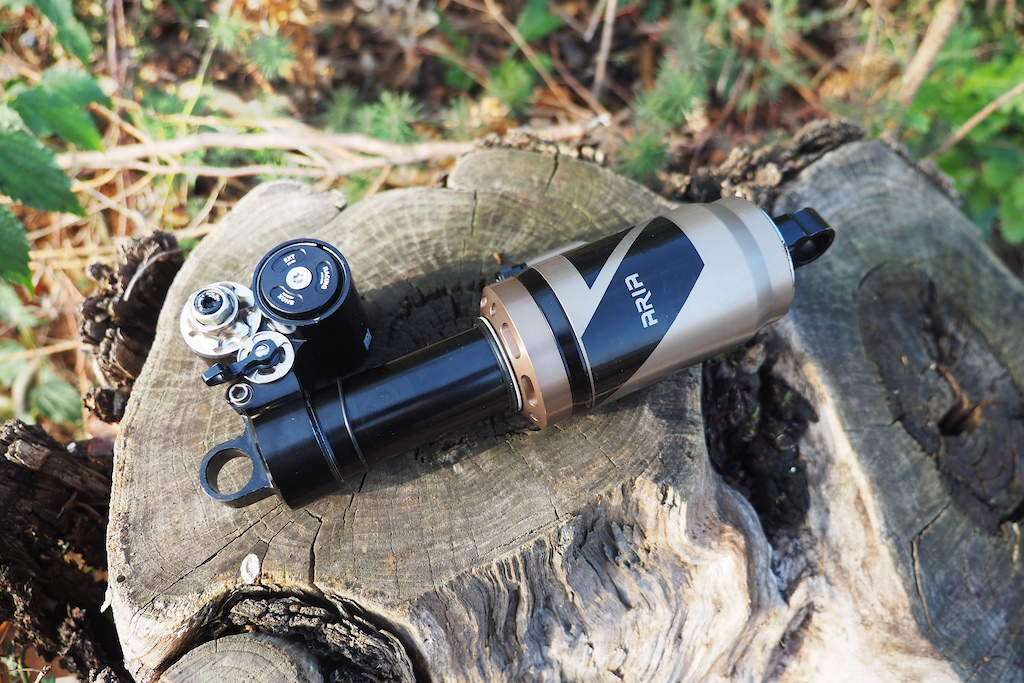 EXT's first air shock, the Aria, shares the same damper architecture and features as EXT's e-Storia coil shock for e-bikes. Though the damping tune(s) and valving will likely be different, it has the same high-speed and low-speed compression and rebound circuits, firm lockout system and adjustable hydraulic bottom-out controls.

The air spring is what makes the Aria stand out from other shocks on the market. Like the Era fork, it uses a twin positive chamber design, so there's one air valve for the main air spring and a second to control the ramp-up. This allows the mid- to end-stroke to be controlled more independently from the beginning part of the travel, and more precisely than with volume spacers.
EXT Aria Details
• Twin positive chamber pressure adjustment
• "High volume" negative chamber
• High- and low-speed compression, hydraulic bottom-out control, lockout and rebound adjustment
• Metric and Trunion sizes, from 50 to 75 mm stroke
• Price TBC
• Available to preorder later in 2022, shipped February to March 2023
It also means the progressivity of the shock can be adjusted quickly with a shock pump on the trailside; there's no need to take the shock off the bike, take it apart and add or remove volume spacers at home.

EXT are still working out the final details so pricing is yet to be announced, but they told me "we can assume it will be in a close range of the EXT e-Storia (so around 994.00 € + VAT)". There will be a chance to preorder the shock before the end of the year, and those first orders are due to be shipped between February and March next year. 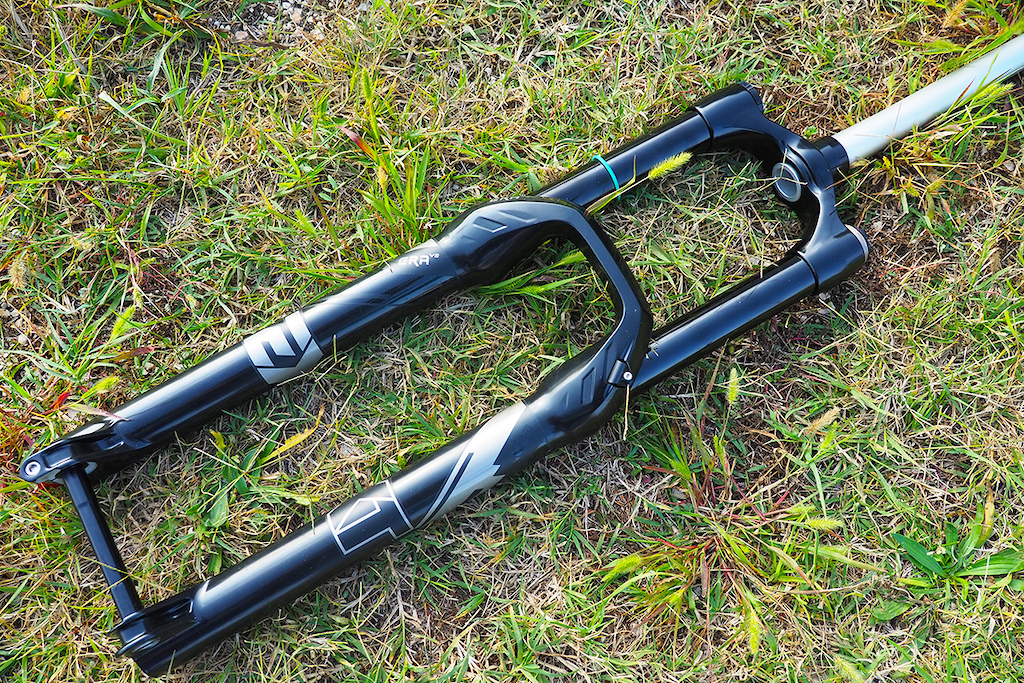 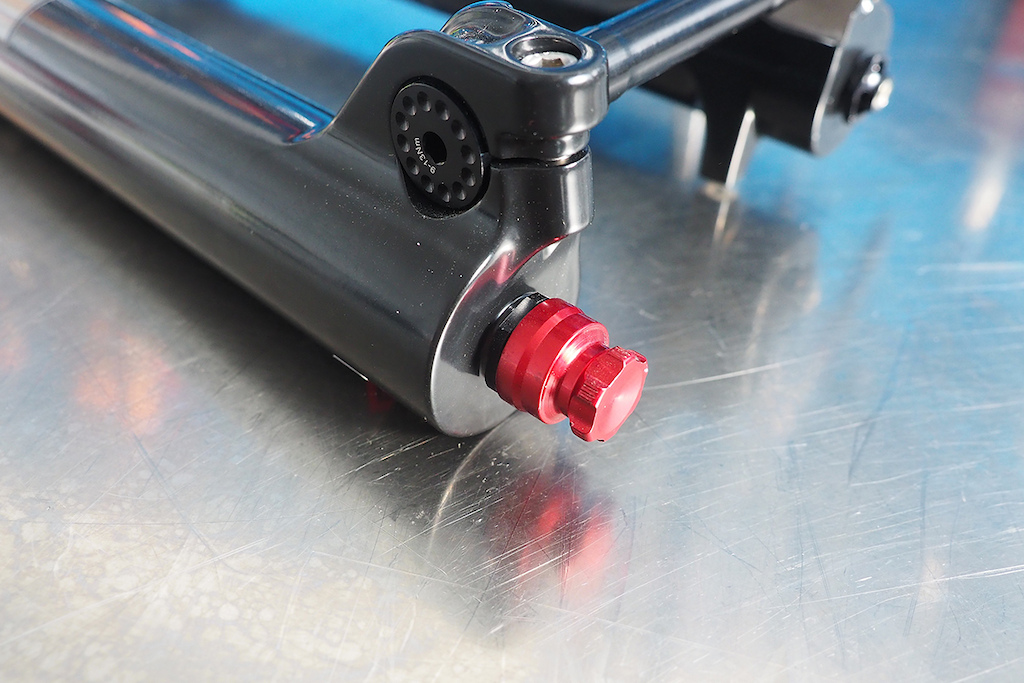 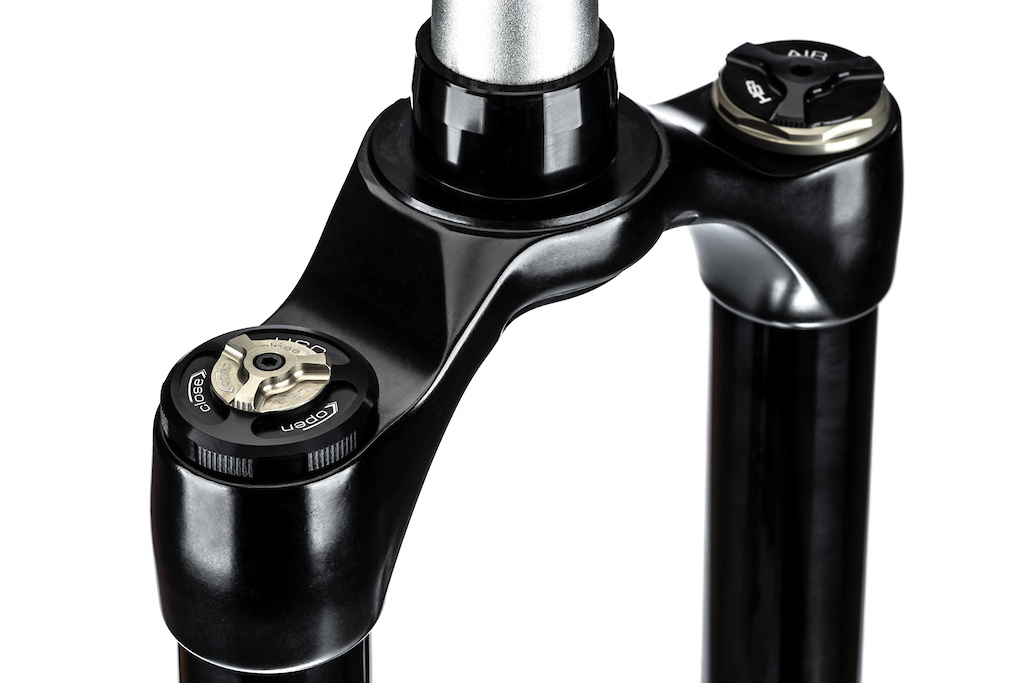 EXT's existing ERA V2 fork can provide anywhere from 130 to 170 millimeters of travel. Their new fork, which they're unofficially calling the "ERA V2 Long Travel version," or "ERA V2 190" for short, is internally adjustable between 180 or 190 mm of travel.

It's more than just a travel boost though, as it features new lower legs, using “Thixomolding Lower Technology”, as well as thicker stanchion walls and increased bushing overlap for added stiffness. A floating axle is claimed to improve alignment and cut friction, and a larger negative chamber volume should make it more coil-like and supple at the start of the travel.
EXT ERA V2 190 Details
• 180 or 190 mm travel (internally adjustable)
• Twin positive air chamber design
• Increased negative chamber volume
• High- and low-speed compression and rebound adjustment
• High overlap crown-steerer junction to increase stiffness and reduce creaking
• Price: 1480.00 € + VAT
• Available aftermarket from January 2023
The claimed weight is very coil-like too, at 2,450 g. That's around 150 g more than a RockShox Zeb and 100 g less than a RockShox Boxxer. It should be available to buy from January, at the same (quite high) price as the regular ERA V2.


Tech Week 2023 is a chance to get up to speed on the latest mountain bike components, apparel, and accessories. Click here to view all of the related content.

hamncheez (Oct 27, 2022 at 12:34)
@jeremyk: They have that proto inverted one floating around. I'd love to try that. My Era V1 is hands down the best fork I've tried. But if the normal Era is so freaking $$$, I can't imagine what their inverted DH fork would cost.

We talked suspension a bit, and I mentioned I was surprised that we haven't really seen many "enduro" dual crown forks out on the market.

He said something along the lines of "keep an eye out". I don't know if thats the proto inverted one that we've seen a few photos of now, or if its something else. But, I think between those two things, its pretty clear that something dual crown is coming from them in the future.

ihsik (Oct 28, 2022 at 0:00)
@hamncheez: In shops because nobody buys them. Hate to say it but it’s the truth. Shops will have them for over a year and loose money selling them.

hamncheez (Oct 28, 2022 at 8:33)
@ihsik: Yes, but they look pretty cool in the window and I think theres still an argument for DH bikes driving sales of more practical bikes. In 10 years people will be saying "Yes, shops don't really sell analog bikes, but they look cool and since racers use them they drive sales of regular bike (ebikes)"

Anyways, I was talking about shop employees; every shop in the Rockies has one or two guys working there who still buy and occasionally ride DH bikes (but but them at employee pricing, so ya losing money on the sale haha).

Grizzly134 (Oct 29, 2022 at 11:07)
Yeah, but they couldn't sell nearly as many of those. My guess is that fork is coming sooner rather than later with these same internals, but this was probably the wiser business decision for the time being.

ncrider5 (Oct 28, 2022 at 6:49)
I think with the Air Valve Orientation in the picture, it certainly will blow up from those air valves crashing into the valve body....

Balgaroth (Oct 28, 2022 at 5:57)
Imagine if they spent that time and effort to fix their massive reliability issues instead ...

mangochaos (Oct 27, 2022 at 15:47)
@rrolly: lots of issues it the latest vintage. Cracked shock bodies seem to be a favourite failure almost like clockwork. Some retailers and distributors are stopping selling them. It’s widespread and extremely common from what I’ve seen. Not sure when the exact year is where issue start but I have a 2022 and suffered from a cracked shock body. Fox was frustrating to deal with through process too. They’ve lost me as a customer.

OU812 (Oct 28, 2022 at 4:07)
@rrolly: I put 55 miles on mine before it starting loosing air from somewhere. I’d go out with a fully pumped up shock and it would be flat about halfway through my ride. Fox rebuilt it under warranty, got it back and 25 miles later the shock body cracked. It’s at Fox again but it will be sold when it comes back this time, I’ve already swapped over to a coil.

WaterBear (Oct 28, 2022 at 6:05)
Get a Kitsuma instead. Great adjustability, best shock I've owned. Have not heard about any reliability issues.

BeerGuzlinFool (Oct 31, 2022 at 14:04)
@Muscovir: frame is not unreliable. I know they had problems the first couple of years but got things worked out. Can't speak on the X2. Guess I'll find out.

I suspect we'll see a new Rockshox "X2 competitor" next year to compliment the success of their Zeb. Return of the Vivid Air?

danielomeara (Oct 27, 2022 at 13:04)
Highly recommend the upgrade. Went from X2 to DHX2 and now to the storia and it’s not even close in terms of suspension performance to anything fox has put right now.

PHeller (Oct 28, 2022 at 9:17)
@KJP1230: why? How many WCDH and EWS races and championships have been won on the Super Deluxe now? It's not holding anybody back, and it's small size gives it packaging advantages the X2 lacks. They've got the Super Deluxe Air DH - Model number: RS-SDLX-ULDH-C1.

KJP1230 (Oct 28, 2022 at 10:07)
@danielomeara: That is great to hear. Do you have the Lok version? Most of my rides are long climbs, followed by long descents. Even as well as my current enduro bike pedals, I still like to use the climb switch feature.

ShreddDuk (Oct 27, 2022 at 19:14)
I reckon EXT forks would look even sicker if the lowers had the same finish as the air can of this new shock, or at least some accents with the same finish. Colour scheme is banging.

waffleShirt (Oct 27, 2022 at 17:02)
I'm sure it's just for the photos, but those air valves are going to be obliterated by the reservoir body if someone runs the shock in that orientation!

hamncheez (Oct 27, 2022 at 13:20)
@ReformedRoadie: They aren't widely available anymore, and not easily swappable with the wheels from your other bikes. In all reality it was a better standard than 15mm.

Linc (Oct 27, 2022 at 17:05)
Except that many top of the line enduro bikes don't allow you to run a dual crown because of their shitty design decisions...