Everesting on a Enduro Bike 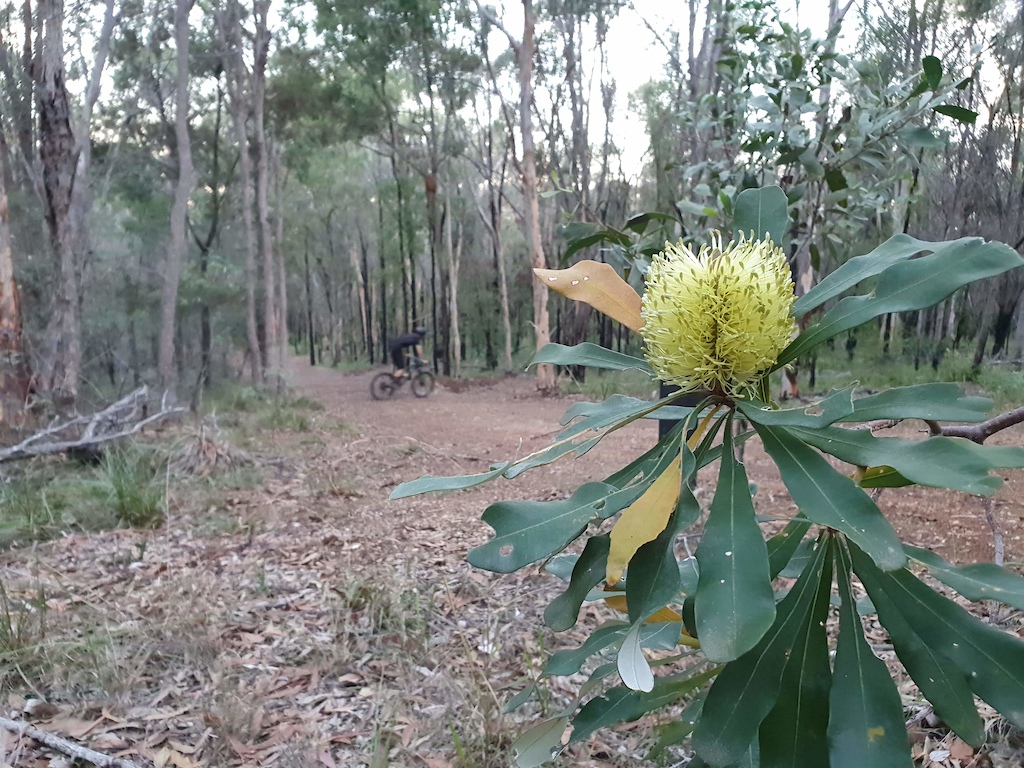 EVERESTING
ON A PARTY BIKE
Hi, I'm Shane Finnerty and I love to ride mountain bikes. Originally from the Central Coast in NSW (Australia) I also lived in Whistler (Canada) but now call Brisbane (Australia) home. Riding bikes is an obsession, an outlet and a chance to test myself. From hitting a big jump, or going as fast as I can down a trail, to doing something I didn't think was possible (and not dying) - it's the feeling you get from mountain biking!

Everesting is where you climb/lap a hill as many times as you need, to reach the height of Mt Everest (8,848m) in a single ride. To put it in perspective, it’s like climbing from Longhorns pub to "top of the world" in Whistler, 6 and a bit times! 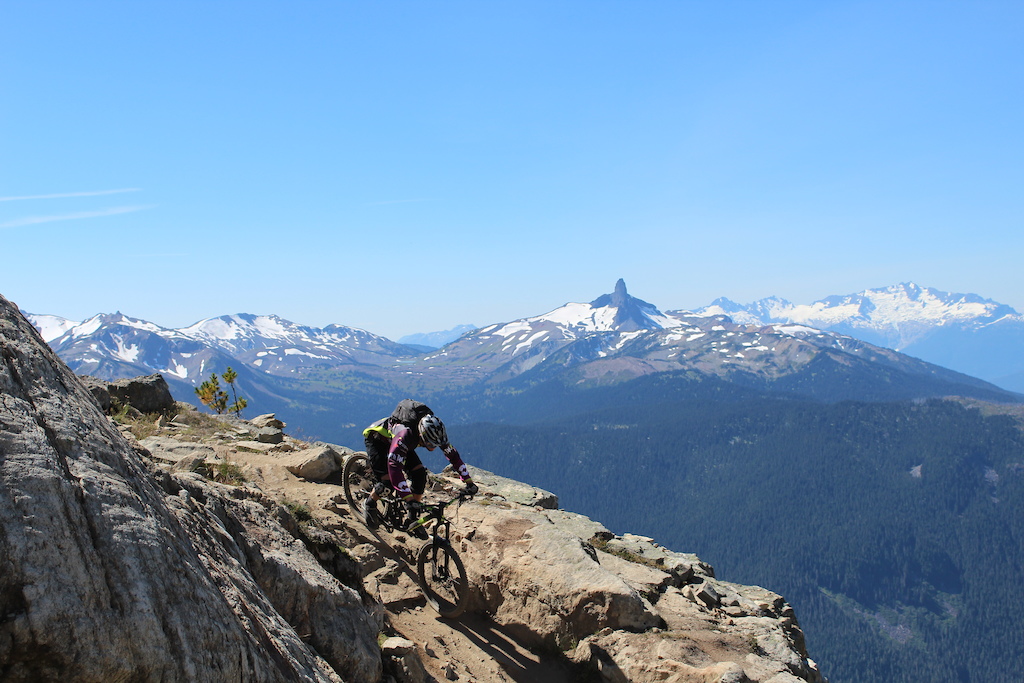 Top of the world, Whistler, Canada - 2017
Motivation:
When I first moved to Whistler, it was all about the park and trying to hit bigger and bigger jumps. Once I discovered the trails outside the park, there was no turning back, it became all about the adventure, the technical skill and the endurance. The trails over there were better than anything I had ever ridden, each ride was worth every pedal - this is when I fell in love with the climbs. I had seen people Everesting before on Pinkbike (Henry Quinney, Ben Hildred, Tom "Kiwi" Bradshaw) and thought "I need to have a crack at this."

Why Everest? For the challenge - to prove it to myself - to do it my way, on the type of trails I love and on my chosen steed. 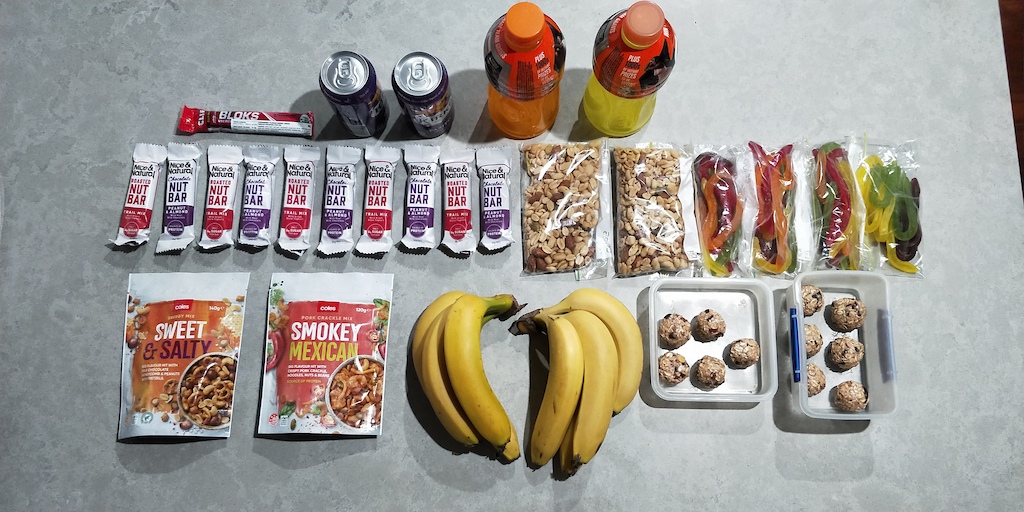 Some of the snacks I had for the day
Prep:
Basically, my preparation was riding my bike as much as I could, laying off the beers for a little while and trying to eat as healthy as I could. I picked a local trail in Mackenzie, Brisbane, to do the challenge. It was a climb that over time would get harder and harder. It had a pretty intense pinch climb and a lovely tech/flow descent. Elevation per lap was 82m, this meant I would have to lap it 108 times - I know, it's a bit nuts. While I knew I had the fitness, I just didn't know how long it would last for... 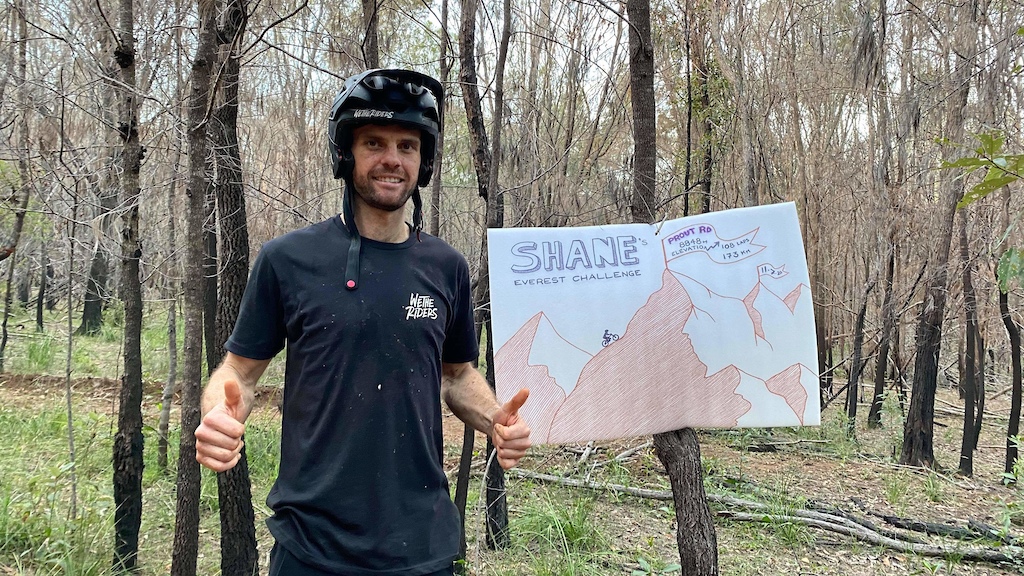 The Challenge:
The day started super early, I woke up at 12 midnight, had a big bowl of oats, a banana and loaded the car to head out. I started the ride at 1:30am, with the view that if I get a fair few laps done before the sun comes up, I’m in front. This plan seemed to work, I was fresh and going at a steady rate, ticking off laps one at a time.

Around 4am I got to the top and saw another light and thought "who the hell is that?"…it was my good mate John. He popped out for a couple of hours, keeping me motivated, and then heading home to do work. Back on my own again, music in the ears, punching out the laps - more people started to arrive. The crew set up base camp at the bottom of the trail and strangers riding in the area started to stop and ask "what all the fuss was about." 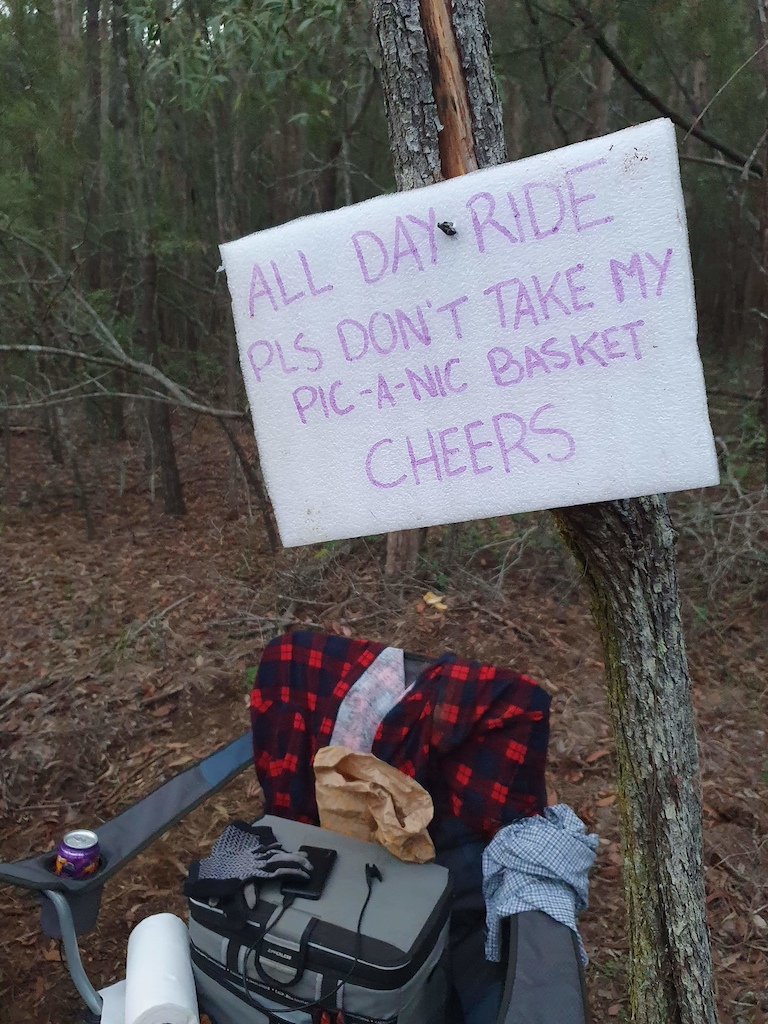 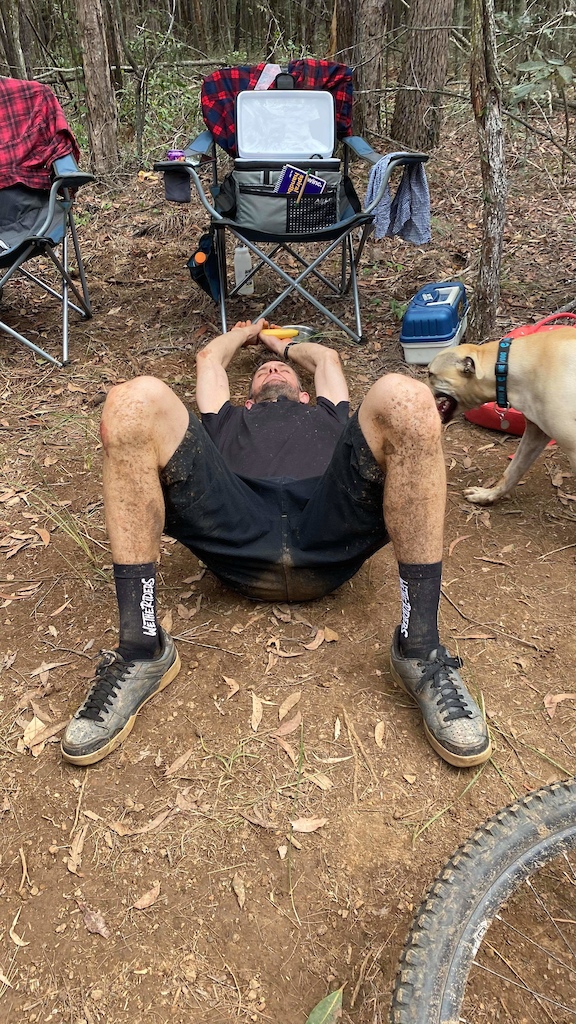 Between laps the support crew were enjoying a few beers, cheers and at one stage a full on BBQ. More came and went. John even popped back a couple of times and clocked a 60km day. Thinking back, there wasn't really a point where I felt I wanted to give up. With the support of everyone around me, I was in good spirits, motivated, and knew if I just keep ticking away eventually I will get there. 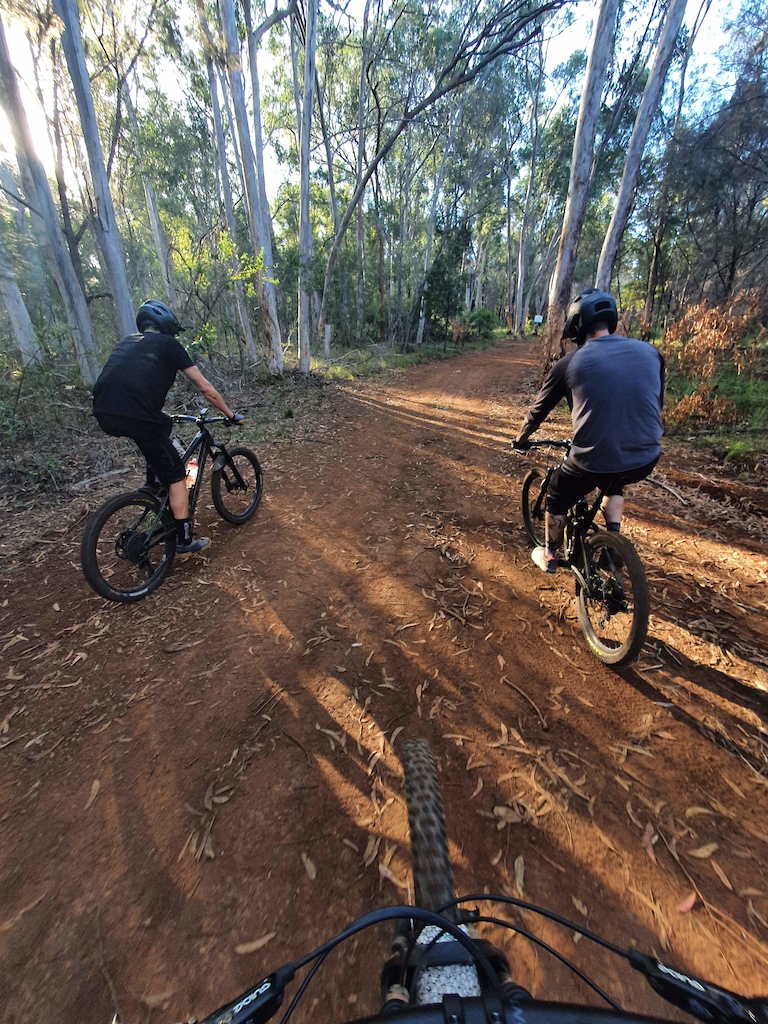 Don't get me wrong, there were down periods where energy was hard to find - like when I forgot to actually eat instead of snack and everyone commented on how pale I was looking. Or when I accidentally pressed save on my Garmin with 1000m elevation still to go, luckily I had a back up. Somehow I pushed through it and kept pedalling. Previously, my highest elevation ride was around 3,000m. When I pulled in to have a bit of food around midday I had hit 4,500m! It was at that point I thought "I can do this, just do that again" haha easier said than done.

I was now eating regularly, and although it was small portions, I was struggling to find the motivation to keep forcing it down. I made sure I had a variety of snacks and small meals including chicken wraps, protein balls, bananas, nuts, lollies, bars, gels, soft drink, energy drinks, TimTams, BBQ snags and Macca's chips - not everything was nutritious. The energy being burnt, was far greater than the food I was putting in. It felt hard to muster the energy to keep going but with the positivity surrounding me, the legs kept turning.

I kept plugging on lap after lap after lap and once I got past the 3/4 mark, I was getting properly excited. At this stage though every time I sat on my seat it was like sandpaper, yeah not good. My logic of starting early worked but the challenge of riding into the wee hours of tomorrow was still ahead of me.

With 20 laps to go I seemed to get a 10th wind. My lap times were getting faster - I wanted it bad. By this time I knew the descent trail like the back of my hand, just as well since I didn't have a head lamp and was just relying off a fading light on my bars. On my last official lap, where I hit 8,848m mid way through, I scared the possums with a big scream of joy, it felt good. I couldn’t believe it. I had done it. I just climbed the elevation of Mt Everest on my mountain bike - HELL YEAH!

When I got to the bottom the gang was ready with their bikes and pockets filled with beers for one last victory lap. We cheersed at the top - it was by far my favourite part of the day. 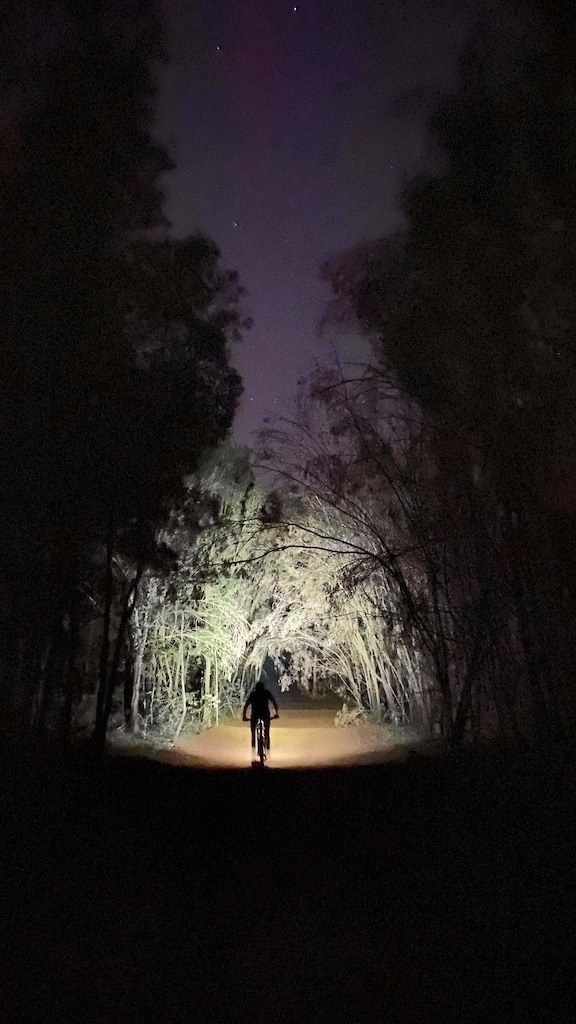 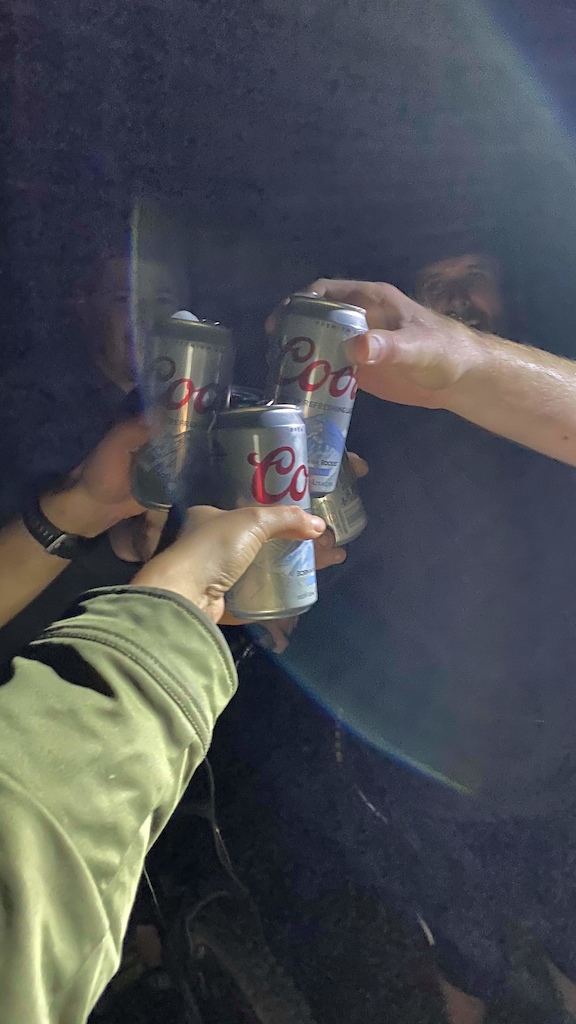 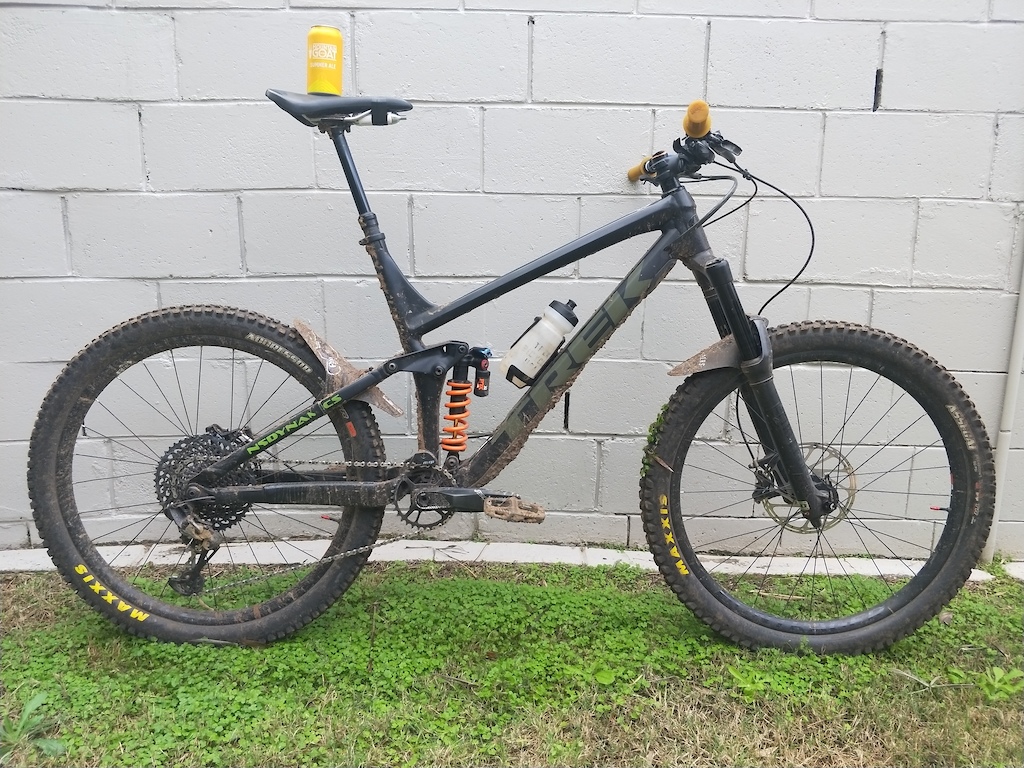 The Bike:
Trek Remedy: 160mm front a coil shock out back and flat pedals. It's a all round party bike. Not one mechanical all day, and did I mention...coil shock!!!

Reward:
The challenge itself was the reward, I needed to prove it to myself and finishing it with mates around me gave me an awesome sense of accomplishment. It was the most mentally challenging day, on a bike, that I have ever had to overcome. It's something I'll never forget.

I wanted it, I put my mind to it, I worked hard and at 3.30am the next day - I earned myself a rusty water.

Big Thanks!
I could not have done this without the crew I had….

NES - Partner, sign artist, and enforcer of food
PIPER - Also an enforcer of food, chief crier of lap numbers and rhymes
STEVE - The bloke is the guy you need around too keep you sane, super positive and in the lead up, my go to for advice
JOHN - I told John I was going to have a crack at this, next minute he's there 3 different times throughout the day, ticking off laps right till the end - champion
JULIAN - Trek Woolloongabba lead man and mega support
ZACH & EZ - These dudes clocked their biggest rides that day - that’s unreal and all to support me, absolute legends
SAM - Macca’s coke, cookies and some awesome camera work
ROSCO aka (Ross dog) - Trail dogging until he worked out, this is nuts, I’m sitting in the camp chair and sleeping 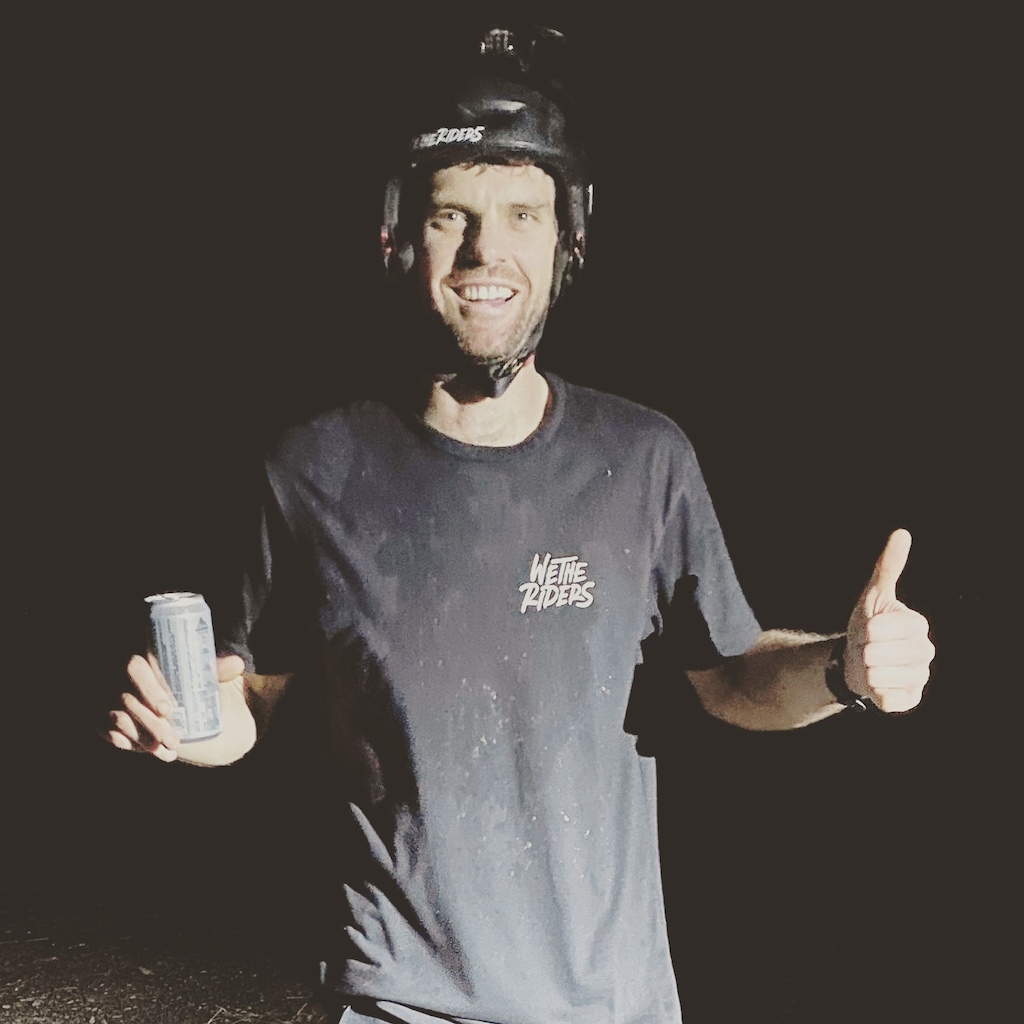 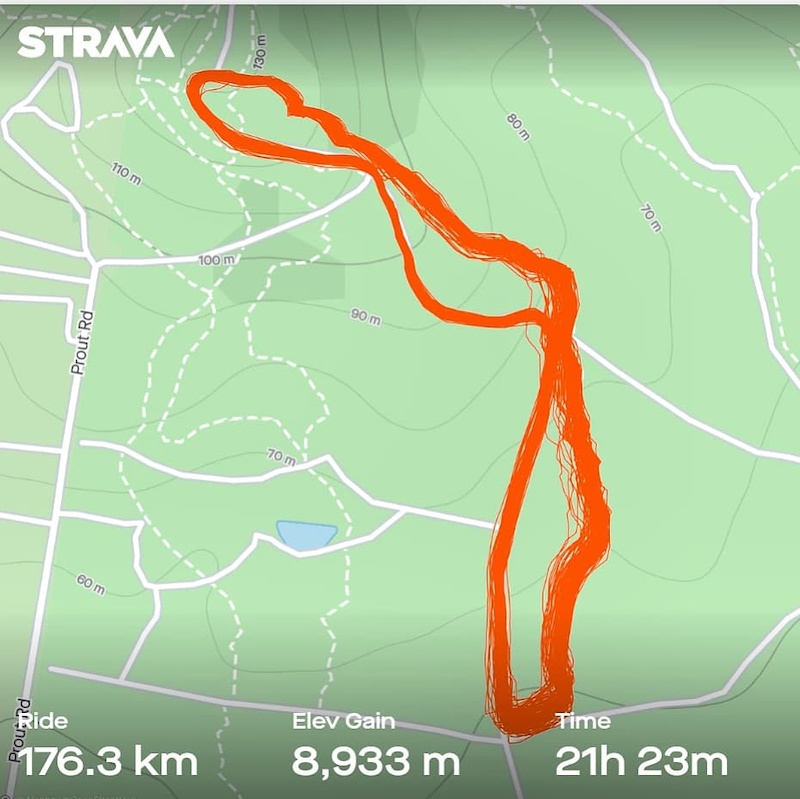 taskmgr (Jul 19, 2020 at 8:05)
Its not Coors light lol it's just coors. beer is different everywhere. Like Heineken in Australia doesn't taste like Heineken in the u.s. or Canada. In Canada we have Coors banquet and it's actually good unlike Coors light.

DirkMcClerkin (Jul 19, 2020 at 20:51)
Imagine going through that and being handed a Coors, Bud or Miller. Someone get this man a Tecate!

singletrack29er (Jul 19, 2020 at 6:00)
Awesome write up man, congrats on the accomplishment and doing it on the enduro rig! Rusty Water, I am 99% sure I'm with you on this but have never heard it referred to as that haha!

vandall (Jul 19, 2020 at 8:33)
curious to know if you weighed yourself before the ride and after. How much weight do you think you lost?
Everesting on that bike is no joke, congrats.

stoked you got buzzed and motivated to go out and give it a bash.

how hard is this trail to ride?

watchtower (Jul 19, 2020 at 15:47)
Awesome work mate, I wonder if an xc bike would make much of a difference, the Remedy would be comfy for sure, ya gotta be comfy.

By the way, what night lights are you using? They look superb.

When I say badass, I really mean it.

And damn, I was thinking about using my XC bike for an attempt soon. Maybe I need to man up.

Arierep (Jul 19, 2020 at 9:19)
Would likely put some light Exo tyres and remove inserts if present, but flat pedals would definitely be my choice for this. Not only I feel no loss of climbing efficiency, but they're also much kinder for my knees and ankles

you toasted. cheers is what you say.

will never not irritate me.

whydomylegshurt (Jul 19, 2020 at 12:47)
An "official" Everest is about the dumbest thing I've ever heard. It's a made up metric set as a personal challenge, every version is official.

real fame is hidden in the PB comment section only