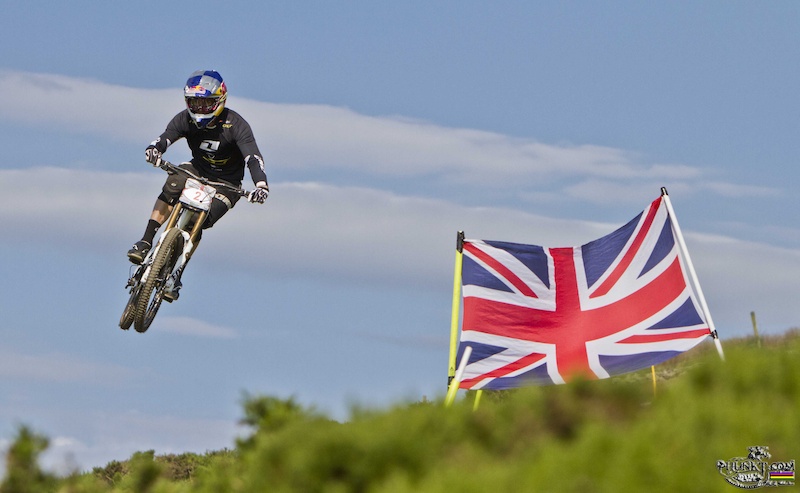 Organising a race is never easy especially here in the UK as we have had the wettest summer since records began over one hundred years ago. When farmer Jac, the land owner, calls you up whilst you're away at Crankworx in France and says the parking and pits is more like a swamp than a field, you know we were in trouble. BCs main man Roger Wilbraham shot over to inspect and we were touch and go whether the event would even go ahead. Lady luck was on our side as come Thursday the weather was shifting and a heat wave was expected. This meant with a clever bit of planning and route direction everyone would be able to slide into place on Friday and drive out on Sunday without a tow. The only flip side was half the tractor drivers (the uplift) that were booked cancelled as they had to cut silage. Jac worked over time and pulled out all the stops and a few favours to ensure that we had thirteen tractors come Saturday morning! 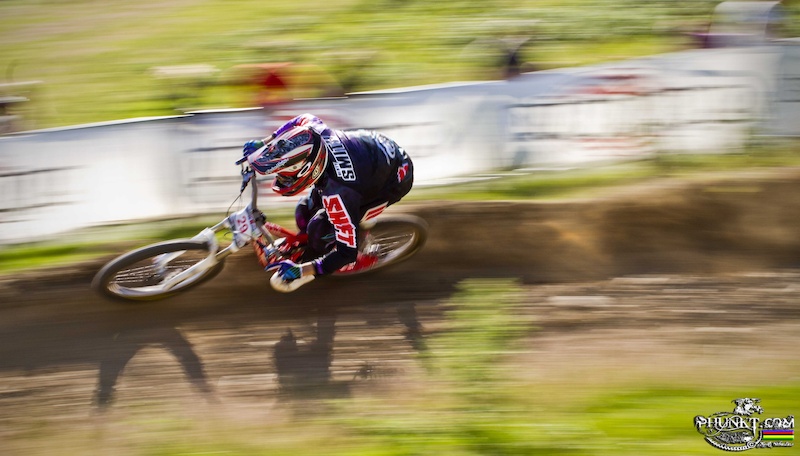 By early Friday evening all the teams and pits were set up and the hill was alive with riders checking out the course after the British Cycling Commissaire gave it the all clear. The course starts at the top of the hill with a breath taking 360 degree, panoramic view, that in itself would be a worthy POD here on Pinkbike. The course itself was taped super wide as the top section is open Welsh hillside, before you descend into the switchbacks, across the fire road, traverse around the hill, into the 4x course and then hit the final berms and super long finishing straight. Moelfre is the spectator's favourite, with only two trees on track right near the finish you can see the riders up on course for a considerable part of the race run. 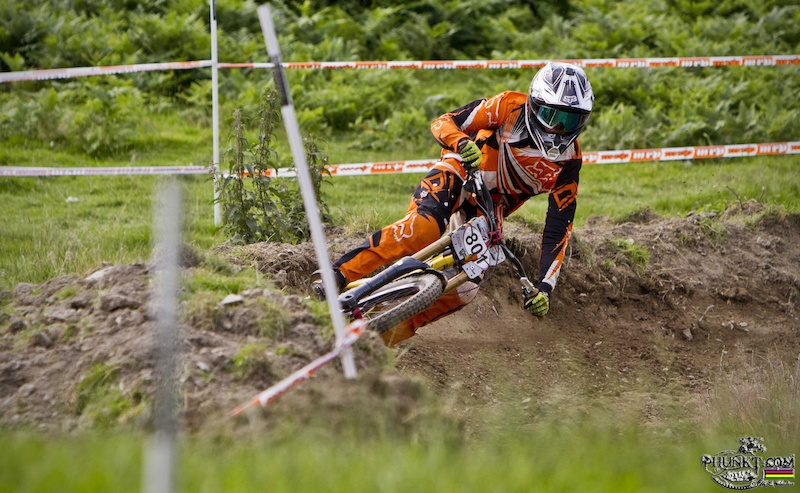 Thankfully we stopped Alex Bond as he was about to head up the fire road in his pick up truck on Friday evening. After explaining that Gareth Brewin rolled his truck, wrote it off and nearly wiped out him and Sam Dale a few years ago at another race I said that we would not want that to happen again. Alex said he was a good driver and would never do that. Maybe tempting fate, but on his way home two hours later from the event he wrote his pick up truck off, good news was that he wasn't hurt, only his pride. 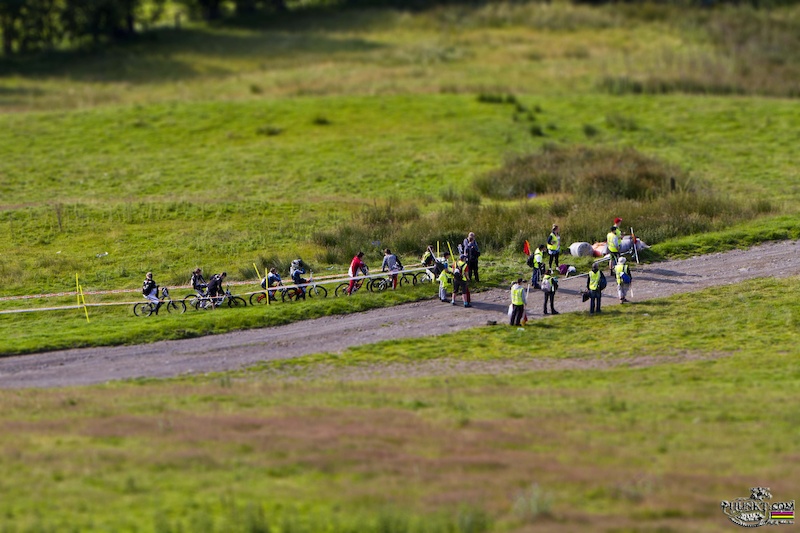 The early bird catches the worm, riders qued up with the marshals to get on the first uplift.

Saturday morning and a very rare sight for the British racer, blue skies and glorious sunshine. Sign on opened at 07:30 sharp and the keen hit the uplift before 09:00 to get the first ride to the top, with many opting to let the sun dry the top grassy sections, they knew come 10:30 the track would be bone dry and dusty. Practice rolled onto 18:00 allowing many riders to get into double digits on practice laps. Martin Sands, the farmer from Llangollen, has been working overtime with Dave Pearce and farmer Jac to produce a new stacking system that stops the bikes getting damaged on the bumpy uplift roads. The portable system straps onto any flat bed trailor, the answer? Yes we think so, watch this space racers and uplift riders. 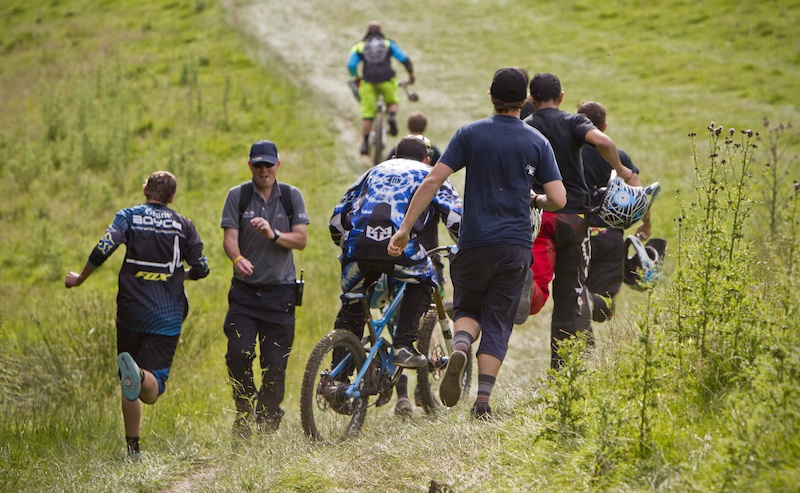 The customary Saturday afternoon dash, if you can beat Si Paton to the last uplift you can get on it, just don't trample over the British Cycling Commissaire.

Saturday evening's entertainment after the riders meeting was provided by Monster Energy and saw Kevin Radical aka Radman hit the decks and spin the tunes in the big marquee whilst the projector rolled with several videos including the highlight of the night: DC Shoes: Ken Blocks Gymkhana Five which you should checkout on Youtube and add to the 23 million views so far. The camp fire burned, seats were pulled up, rugs laid down as riders, fans, families, babies and dogs all sat down, chilled out and chewed the fat. Soon it was 22:30 and lights out were called as everyone disappeared into the night ready for racing the next day. 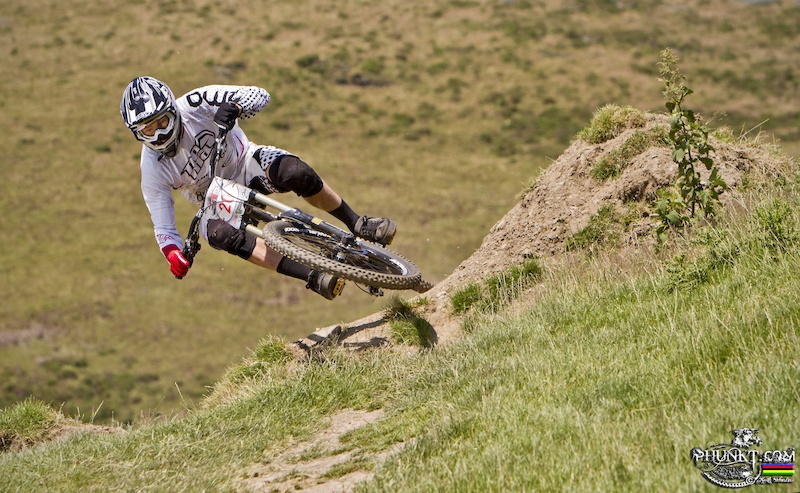 Sunday came around quickly and with the track live at 08:30 many were keen to bank two runs ready for seeding and then the all important one race run as the big decider. The pits basked in glorious sunshine, but the top of the track was a different story. 30-40mph gusts were reported and the Fox Head instant shelter at the start line was hastily removed before mother nature did the job for us. Riders had to quickly change tactics and keep the bike low, pinned and tucked themselves in on the flat out sections. Luckily everyone kept it rubber side up, well almost and for the first time in several years the air ambulance helicopter was not seen circling in the air. The only other flying object was this one pictured top right, was it a bird, was it a plane? 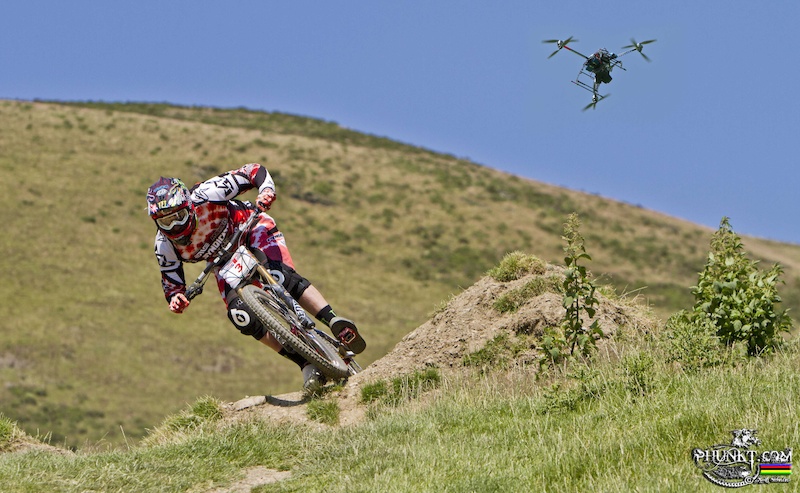 285 riders made it down on Sunday meaning we lost quite a few other both days after initial sign on, seems the high speed and something called dust, two factors combined and easily damage the well being of the lesser spotted UK downhill racer. Second runs dropped in at 14:20 and we were all wrapped up by 17:30 as we headed over to the podiums with farmer Jac handing out the medals as the riders drowned themselves and each other in cheap champagne. 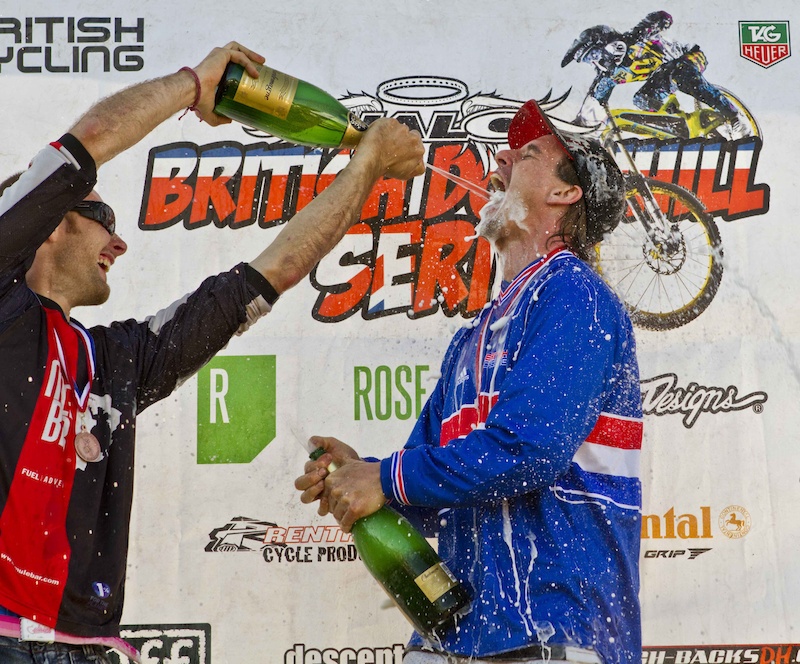 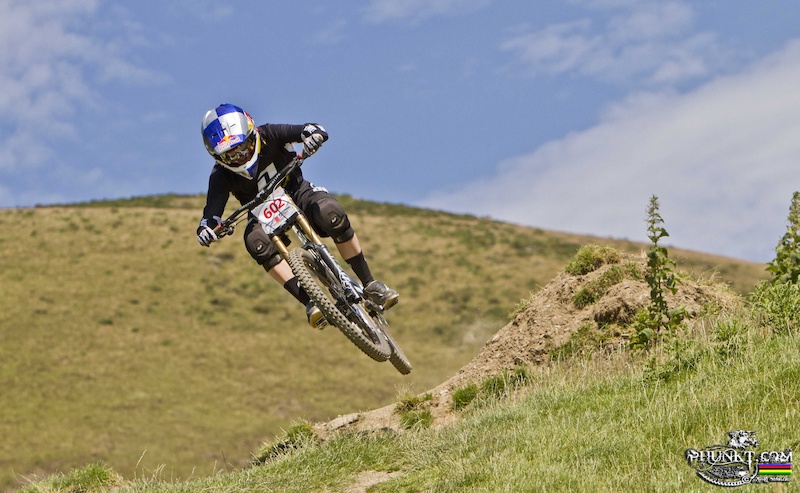 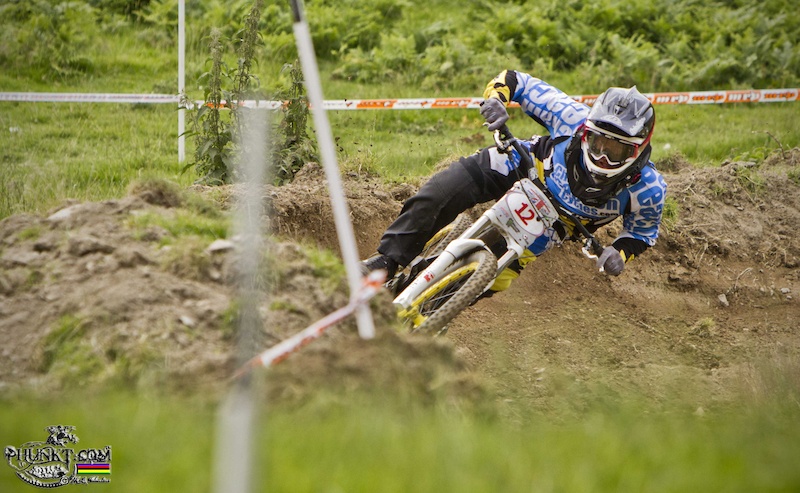 Joe Smith on the last left hand berm, this caught many out in practice. 2:29. 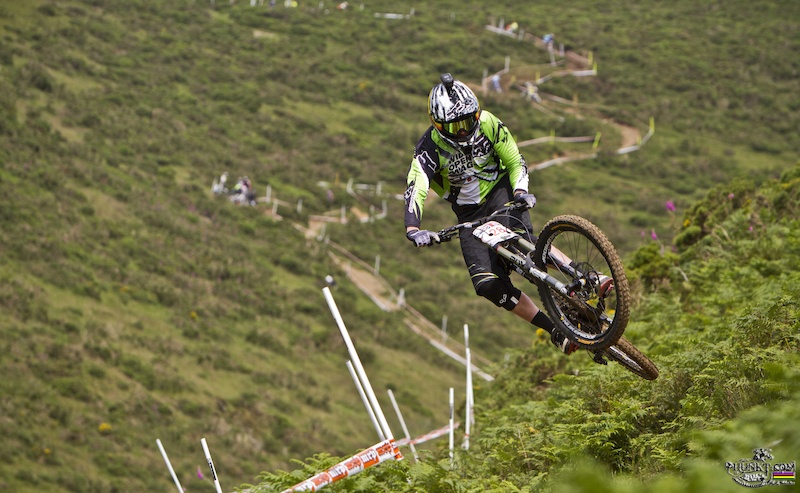 Rich Thomas lost his chain on the stream crossing, he still kept it Wideopen 2:33

Juvenile Men
Purvis makes his tenth career win the most important one with over a 4.5second lead on the rest. Is this the new Danny Hart?
PURVIS James Team CHR 2:54.061
ROBERTS Hugh Descend Hamsterley 2:58.675
HATTON Charlie Pedalabikeaway/Flyup Downhill 2:59.059

Youth Men
You know the name, 1st at the iXS Cup U17 at Innerleithen earlier this year, Vernon one second up today, I know Fox his race kit sponsor are stoked for his win but having to wear the National Champs jersey on the flip side always upsets the jersey sponsors. I've seen Bryceland grow up over the past ten years, is this his shadow? Yes, future World Champ? Captain 23 make note.
VERNON Taylor Bike It/Fox/Maxxis/Mojo/Scott 2:38.184
WESTON William Madison Saracen Downhill Team 2:39.208
HAVARD Callum Team Skene/Mojo 2:39.713

Veteran Men 45-49
Cobb managed to stay upright for a change, he crashes big! You can tell the older category vets as they are that old they don't even know how old they are. Little entered the 40-44 category and only when the BC Comms clocked his DOB they moved him over.
COBB John Mulebar 2:50.396
LITTLE Peter Pedalabikeaway/Flyup Downhill 3:02.370
TAYLOR Greg Rave Racing 3:04.709

Master Men 35-39
Whitfield was originally Orange's first ever DH pro rider back in 1996 if I remember rightly? How fast was he, faster than the kids five years younger than him.
WHITFIELD Christopher All Terrain Cycles 2:39.785
TITLEY Andrew Ghost RT 2:43.367 3.582
AUSTING Giles Mulebar.com 2:52.779

Senior Men Non-Championship
Ward dominated this one by 7 seconds, hats off also to Jake Hancock for being the hard worker who was the driving force behind all the track changes.
WARD Jake 44Racing Rockstar 2:35.040
DAVIES Sean 2:42.390
HANCOCK Jake Tweeks/No Bull 2:43.280

Junior Men
Connell is super strong, he has to be against the two Jones's (not related) who are both currently on fire. Junior World Champs podium could easily be these three.
CONNELL Joseph 2:31.718
JONES Michael Team Bicycle Doctor 2:32.938
JONES Jono Transition Bikes 2:33.244

Championship Men
Bottom line is nobody is ever going to beat Peaty's tally of 137 National Champs titles. Noteable absences were Marc Beaumont who won the title a few years back here at Moelfre. Even though he says he doesn't like it here. Hart was out after he came worst off with a battle against course tape and the course tape won whilst out at Crankworx France. That said Atherton is a srong force, fighting fit after that broken leg on his home track that is less than 10minutes from his house.
ATHERTON Gee GT Atherton 2:25.938
BRYCELAND Joshua Santa Cruz Syndicate 2:28.142
PEAT Steve Santa Cruz Syndicate 2:28.592 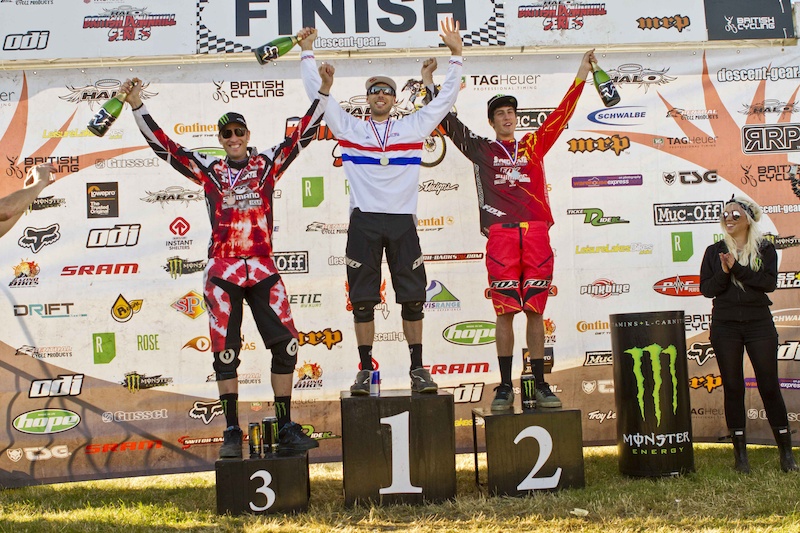 Next round is round 5 at Caersws near Welshpool and Newtown on Saturday and Sunday the 4th and 5th of August 2012.
Parking, Camping and Spectating is FREE all weekend. 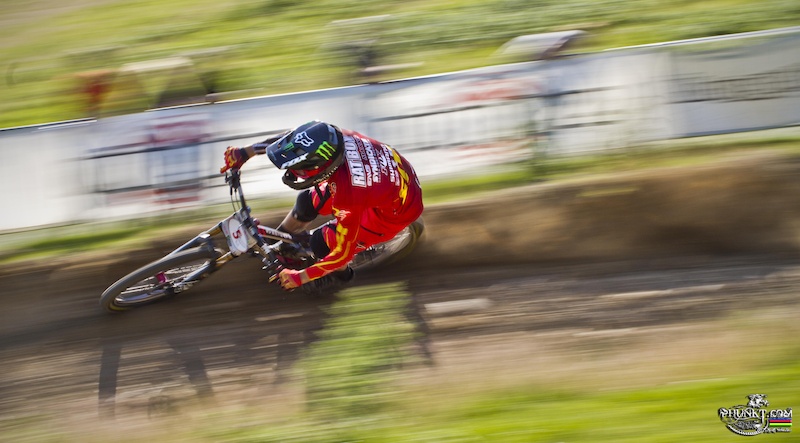 Brycelands on clips these days, but what is that helmet he is wearing? Gee said Josh was his biggest threat today after seeding 2:28.

Jess93 (Jul 27, 2012 at 11:21)
"UK ladies DH racing is strong in talent, but currently low in numbers." Um yes if you don't mention the senior women's category too it does look like only 2 girls actually raced! Kerry put a few guys to shame and deserves a mention like the senior men non-championship men did! It was a good race though!

Rebeccabaraona (Jul 29, 2012 at 7:41)
Isnt that DISCRIMINATION Si? Stating that the numbers of women in DH is low and then not even including the results of ALL the girls that took part in the race? Whats that all about? They paid their fees and raced the race (some times even bettering some of the guys). And at the podium where was the Women Non Champs Champagne? These might sound like little digs but its not exactly supporting women in this sport when they get treated so differently.

socommk23 (Jul 26, 2012 at 11:40)
my bro is building a quad copter to be able to take shots that one was probably taking! awesome go anywhere camera mount!

jpwilbur9 (Jul 26, 2012 at 11:50)
Those guys have such good fun! Camaraderie and competition, great stuff! Love the end with the funny censorship sound lol

dirtworks (Jul 26, 2012 at 12:37)
Also im pretty sure it was Jake Hancock who done the track changes not Jake Ward, Massive appreciation there i see

l0key (Jul 26, 2012 at 16:32)
Sounds like the Delta Heavy remix to me soundcloud.com/deltaheavy/nero-must-be-the-feeling-delta