Oct 8, 2008 at 3:54
by Simon Paton
Tweet
Fat Face Night Ride 2008 at Scarborough North East England. This weekend the DownHill Circus came to town and we rocked it. Scarborough never knew what hit it.

Chris Roberts was in the hot seat for this one as he runs the very successful NPS 4x race series here in the U.K. This was the third "Downtown" street race he's organized, the first being in Bridgenorth, last year we were in Edinburgh and this year it was sunny Scarborough, Britain's first ever seaside resort! 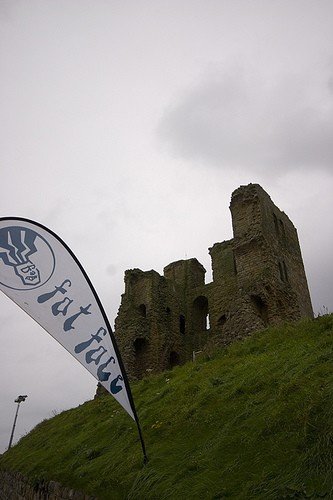 Last year’s Edinburgh event was a huge success, but locating a home for the 2008 event proved to be a long road for organizer Chris Roberts from www.nakedracing.com. We caught up with Chris before and after the event to discuss the logistics in bringing a sport like Downhill MTB to an urban environment.

Chris said:
It was Scott Beaumont who put me on to Scarborough, as he has a relative that runs a Motorcycle circuit nearby and he knew the council were supportive about the link between events and tourism. There are plenty of places to hold events, but the town council really have to be on board and back you 100%. Luckily, Scarborough was intrigued and extremely supportive. To actually get to this point took meetings with the council planners, English Heritage, Police, Traffic Management, Environmental Health and many others and not to mention a presentation to 17 Scarborough officials to let them know what we were all about. 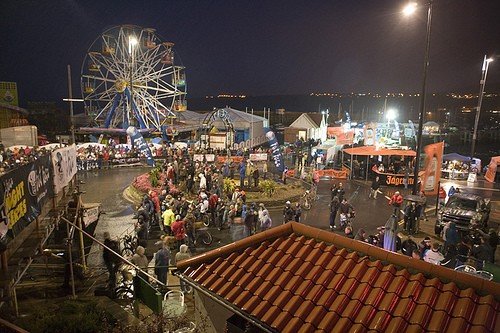 All the fun of the fair.

FatFace the clothing company were again main sponsors and stumped up the dollars to put on a good show. 320 riders entered paying £40 each for four practice runs, a seeding run and one race run. 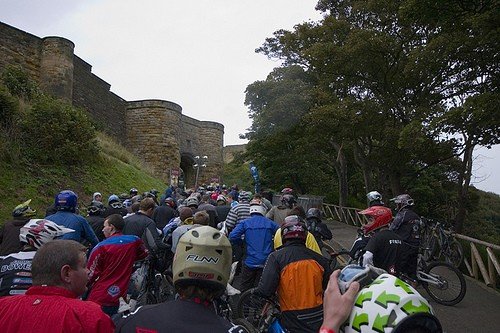 Sign on Saturday morning and number boards on and a wrist band which entitled you to breakfast and a drink. Bacon and Egg all round with a cup of char went down a treat. This is racing!!

Practice was delayed until 10:15 due to the UCI Commissaires asking for a few amendments to the course on safety grounds. These consisted mainly of felting the ramps as with the damp weather they were super slippy.

A huge queue had formed by now at the top by the entrance of the ancient castle which was several hundred years old. I know this to be true as my girlfriend's Mom helped build it as a child. 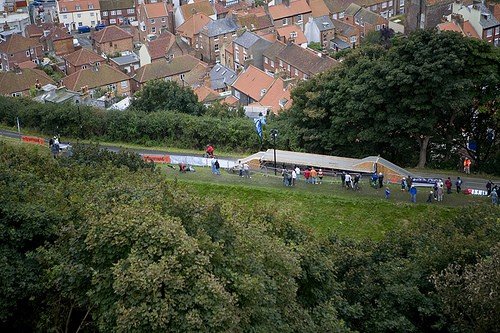 Due to the delay every rider now only had three practice runs (you must have two prior to having a timed run, UCI and BC Rules). Once practice did start the suits from the English Heritage stopped us from racing from the top as the ancient cobbled path was for joint access to the paying public. Even though there were crowd barriers the whole way down it. 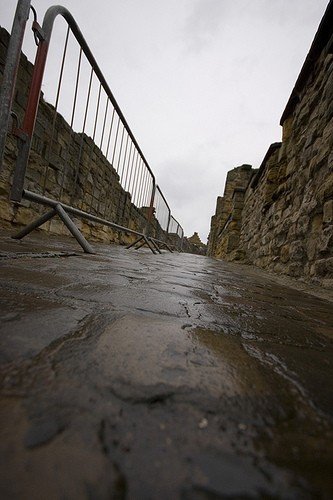 Safely around the cobbles and into a multitude of twisting steps, to either role, manual or double up before hitting the 12ft high wooden tabletop, with pedestrian underpass. Pedal, pedal and the next jump, this time over an articulated lorry flat bed and quickly off again.

A short uphill section next followed by some tight switchbacks before landing onto the tarmac before hitting the last set of steps and onto the final show stopping jump over a scaffold structure. Note: Built by GT's Dave Wardell who is a scaffolder by trade.

This brought them straight out onto Scarborough’s historic seafront and huge crowds as they launched off the 15ft platform and around the road island and finishing on the pier.

Practice went well all day followed by the seeding runs which pretty much went without a hitch. One of the hot favorites Will Longden did go down big style and was quickly rushed to the hospital. Along with a few more riders who never quite tamed that drop or the steps. Good job Rich and Co from Extreme Medics were on hand to scrape them up and inject them with Morphine trackside!

Race runs began and the weather started to make a turn for the worse. Hardtails, Juvenilles, Youth, Vets and Masters made it down safely. Seniors next and one rider crossed the line, the next rider wasn't so fortunate and he went down like a sack of spuds. Same again for the next rider who also had to be carted off.
Then it started to rain Cats and Dogs, there was actually a river flowing down the course and one marshall was seen catching fresh Salmon for his supper on top of the lower steps! Add to this more red waving than at a Spanish Bull Fight, the UCI Commissaire called it a day on the grounds of safety and rightly so. 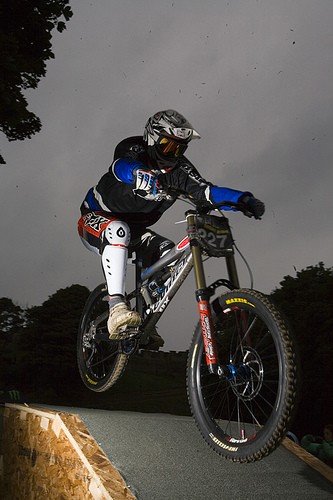 Night time and mirrored lenses? It was dark, wet, cold, windy. Or did this help you stop being blinded by the million flashes from the huge crowds? Maybe he was right. Tip to epileptic riders don't race night races!

Results:
It was Dan Stanbridge who took the Fat Face Night Ride 2008 Crown after Saturday’s event in Scarborough, clocking up the fastest time of the day with 1:12.630.

Clutching his (soggy!) giant Fat Face cheque for £500, an ecstatic Dan, riding for Mojo/ Orange , commented: “Fat Face have done a great job. The course was really good and it was great to see so many people here.” Describing his ride in the horrendous weather conditions, Dan explained: “when the conditions are tricky there’s always a compromise between going downhill as fast as you can and getting down in one piece.” 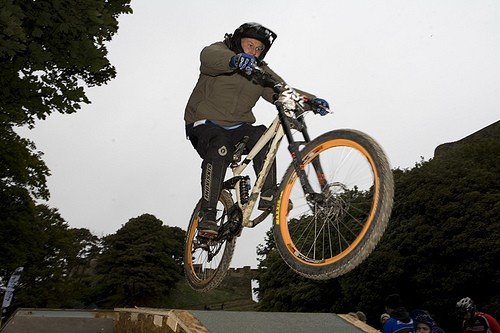 Off the lorry drop.

Commenting on the event, Ian Williams, Fat Face events manager, said: ”Despite weather conditions against them it was great to see so many locals battling with the wind and rain to spectate, surviving for as long as they did! 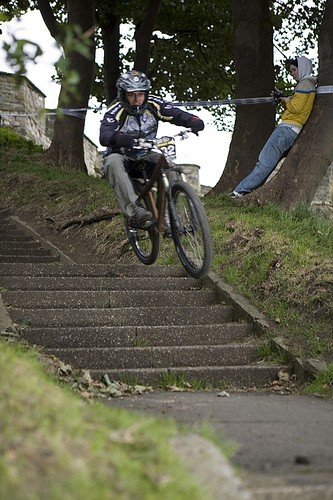 “The speed at which these guys come down the race track is phenomenal and the precision and skill required is exceptional and a real spectacle to watch." 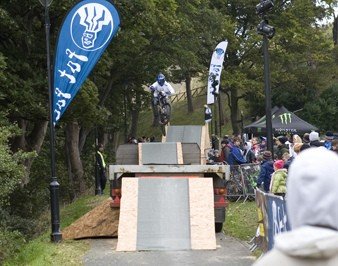 “Thanks to Scarborough Borough Council for all their help, Extreme Medics, the spectators, Andy Cooper commentating at the top, Si Paton's Commentating in the main arena and the awesome riders! Also a big shout to our event partner, Jagermeister for a great after-show party at The Mansion.” 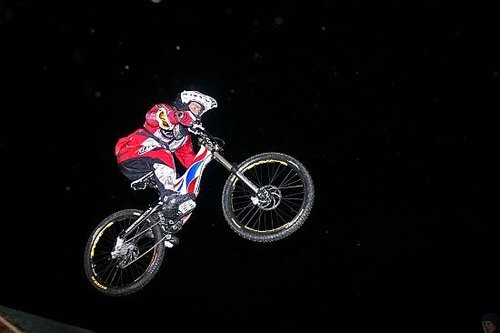 Si Paton in between commentating

Peter Booth, Deputy Mayor of Scarborough Borough Council attended the Prize Giving and thanked the riders and Fat Face for making the event such a success, inviting event organizers to bring it back next year. 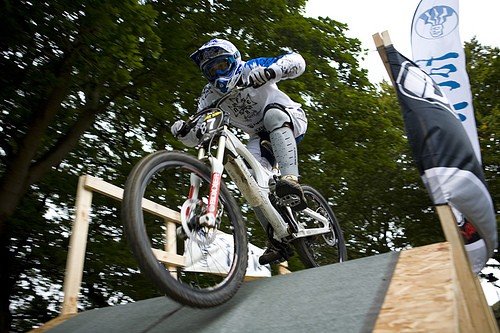 Top of the tabletop.

The generosity of the bikers and crowd shone through when they were asked to dig deep to help raise money for the Sheffield Intensive Care unit for children. This was in memory of Fat Face Team Rider, Kim Bent and her husband, Dom’s son Finley. People were stuffing notes into the tins, eager to help such a worthy cause. A final count of the tins is yet to be made but check out www.fatface.com later in the week. 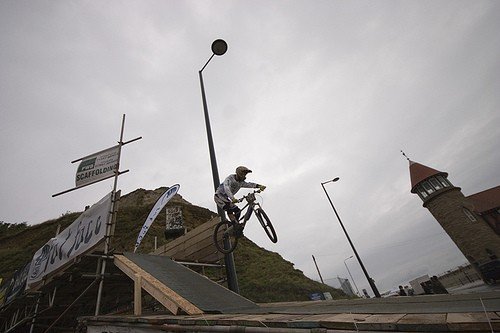 The Fat Face Night Ride brings to a conclusion this year’s Night Series which started in May with the Night Ski and continued throughout the summer with the Night Surf, Night Sail, Night Air (mountain boarding), Night Jump (wakeboarding) and Night Windsurf. 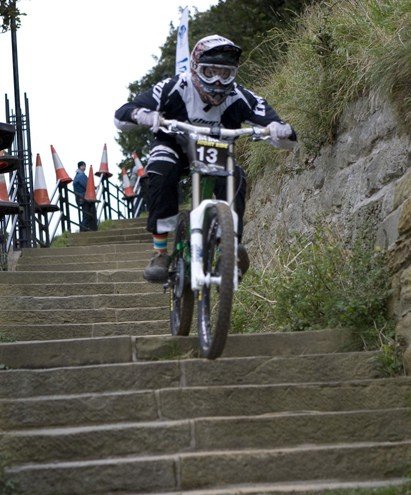 Nathan Vials on the last steps.

Check out the great video from this year's event:
Keep logging onto www.fatface.com for all the latest news about all next year’s events. 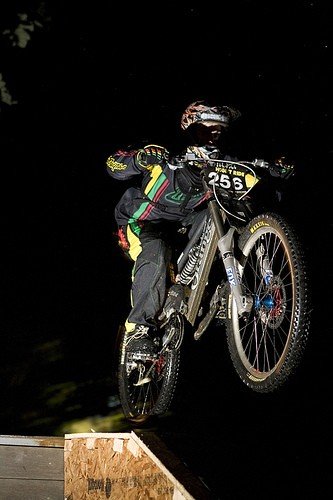 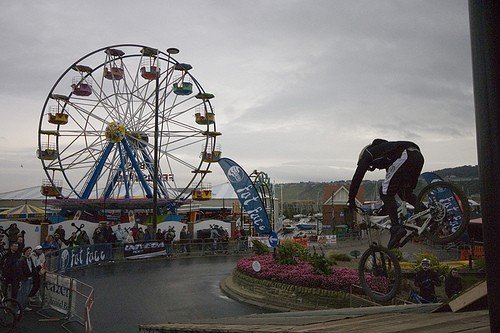 FatFace secured the Mansion Night Club as the after party along with Jagermeister and it all went down hill after one too many Jager Bombs. The riders danced the night away in the usual chaos style we all know and love. The locals were never going to dig it and our friend Tiny (6ft 7ins) caused a stir on the dance floor with the local talent and eight bouncers finally managed to remove him. Did anyone see the bouncer we nick named the "Walrus". He was about 5ft 8ins tall with a 60" waist and weighed around 25-30stone we guessed. Seemed he didn't like it when we shouted at him, "You're that fat every time you get in a lift it only ever goes down!" Two Police cars later, handcuffs, a good ticking off and we were away. The only problem were our coats were still in the club, maybe we'll get them back next year?

On the way home we stopped off at the best store in the World! They sold all those joke stuff things like fake blood, dog pooh, naughty playing cards and even Gollywogs, they don't sell those in Birmingham! Best of all they had pea shooters! £2 and a bag full of dried peas thrown in. I've never laughed so much driving down the seafront targeting every day tripper. Four of us in the van sights locked and loaded.

Racing at the seaside is fun! I wonder where we will be next year?

Never, ever clip in.

Zuotian (Oct 10, 2008 at 5:51)
What kind of tires do they use for these events? Do they keep the knobbys or do they go for something a little more slick?

Matt-W (Oct 10, 2008 at 3:43)
almost went to this, really miserable weather on the day. hopefully it will run next year and hopefully the jumps will be larger.

fireballrider (Oct 13, 2008 at 6:19)
it was in eddingbourgh and apparently its gona be is berby next year

superMHrider (Oct 10, 2008 at 7:39)
so friking stoked this went down well it look sik and the rider's injoyed alot

claudedore Plus (Oct 11, 2008 at 7:24)
check out my blog http://rideincity.blogspot.com/
i collect most of urban downhill event reports in the world.
but all are in chinese, but I am not from china.

but on the contrary that is so sweet...but i could aford the bike and tickets i would get for riding like that to practice