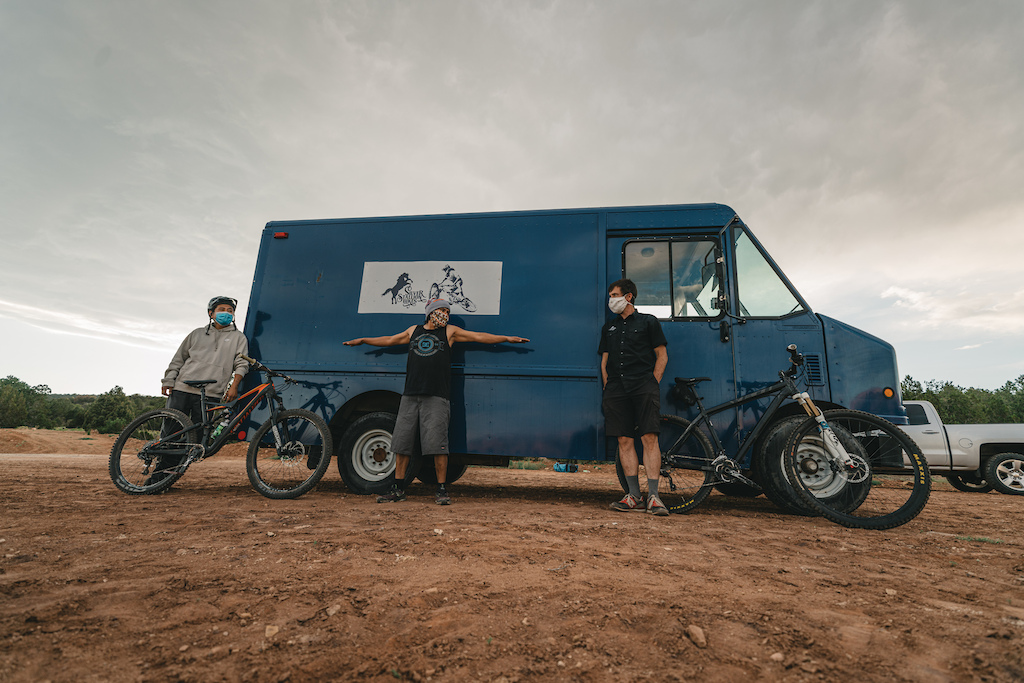 Many opportunities that people in the U.S. take for granted do not readily exist for Native Reservation communities. Across the combined 29,500+ square miles of Diné (Navajo) land there isn’t a single bicycle shop. Residents must travel to towns as far as Gallup to find support. The first bike shop on Hopi land, Mesa Edge Bikes, was recently opened by Manny Chavaria, also featured in this article as a mobile ride mechanic. With the health emergency restrictions from the COVID-19 pandemic, such travel has become even more difficult.

Silver Stallion Bicycle & Coffee Works, Inc., a 501(c)3, seeks to offset these and other systemic challenges, made even more apparent by the COVID-19 emergency, that halt bicycle industry access and participation in Gallup, NM and across Diné lands . In late August, the Silver Stallion received a grant from the New Mexico Economic Development Department to do free bike repair on the Navajo Nation, as a form of COVID-19 relief. The Stallion and the Economic Development Department Outdoor Recreation Initiative believe cycling is an important way for folks to enjoy their homelands, get exercise, and have fun during the pandemic.


In addition to the grant from the state, the Southwest Indian Foundation donated a delivery truck and the Catena foundation awarded the Stallion with a grant to cover the truck’s operating costs. Late this summer, Stans-Pivot Pro Team mechanic, Myron Billy, travelled to Gallup to outfit the Stallion’s freshly donated truck as a mobile bike shop. 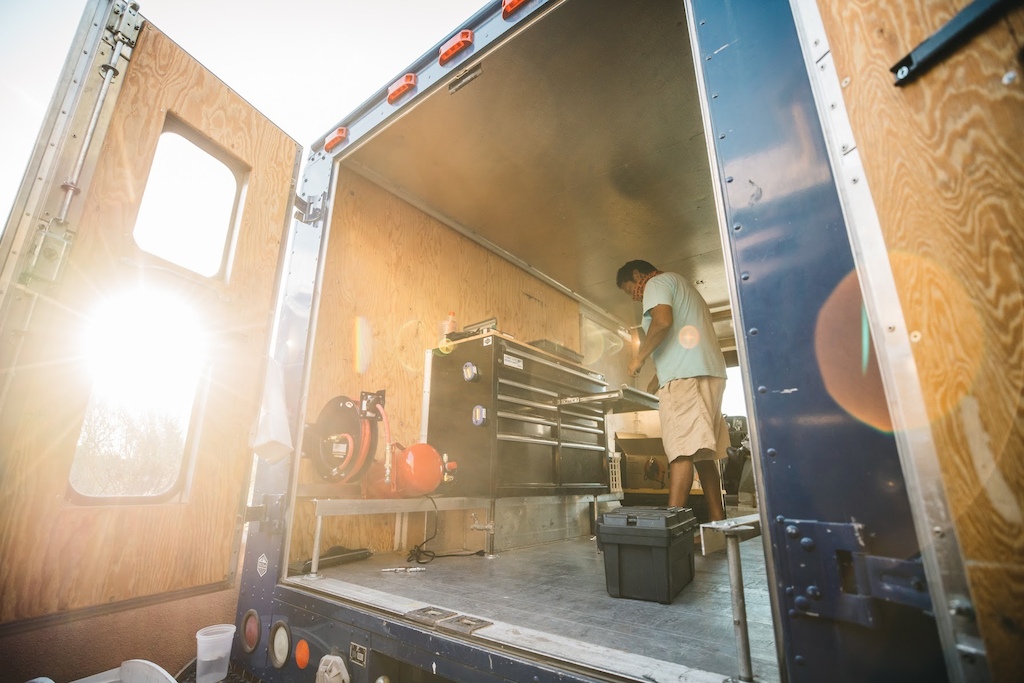 Myron Billy sets up the Stallion Mobile Ride Center to function as a full service bike repair shop - Credit: Shaun Price
From September to November, Billy and the crew from the Stallion held thirteen repair events, repairing 425 bikes in seven different communities across the Navajo Nation. Events were hosted by community members at Navajo Nation chapter houses and community schools. The Silver Stallion’s mobile repair center was a grassroots movement that was led by Diné mechanics and riders Myron Billy, Lorenzo Manuelito, Frank Cook, Terence Yazzie, MT Garcia, Shaun Marcus, AJ Murphy, and Randy Bitsue along with Hopi Nation mechanic, rider, and United Bicycle Institute graduate Manny Chavaria. Scott Nydam and Tim Morris of the Silver Stallion also helped at the events this fall. Billy’s experience working on the World Cup mountain bike circuit was critical to the operation’s success in getting so many bikes rideable and he served as an invaluable mentor for the other mechanics. The Silver Stallion used donated parts from Stans No Tubes, ESI Grips, Squirt Lube, Sram, Slime, and the Clif Bar Pro Team along with salvaged parts off old bikes to do many of their repairs. The crew were experts at freeing seized freehubs, outfitting bikes with new cables and housing, and sliming tubes for the abundant local goatheads. 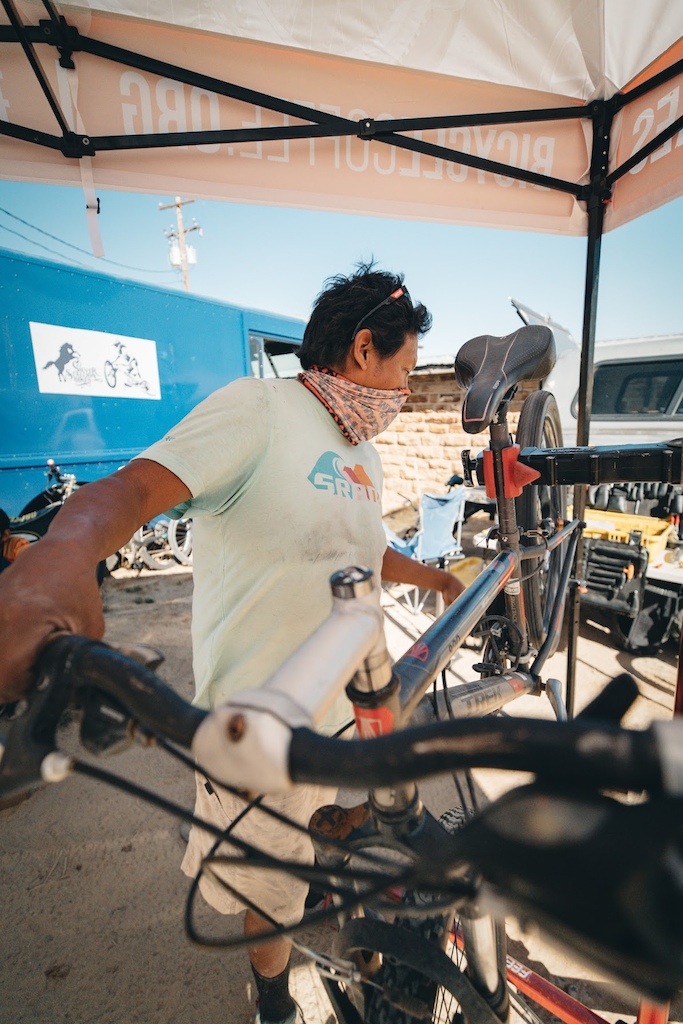 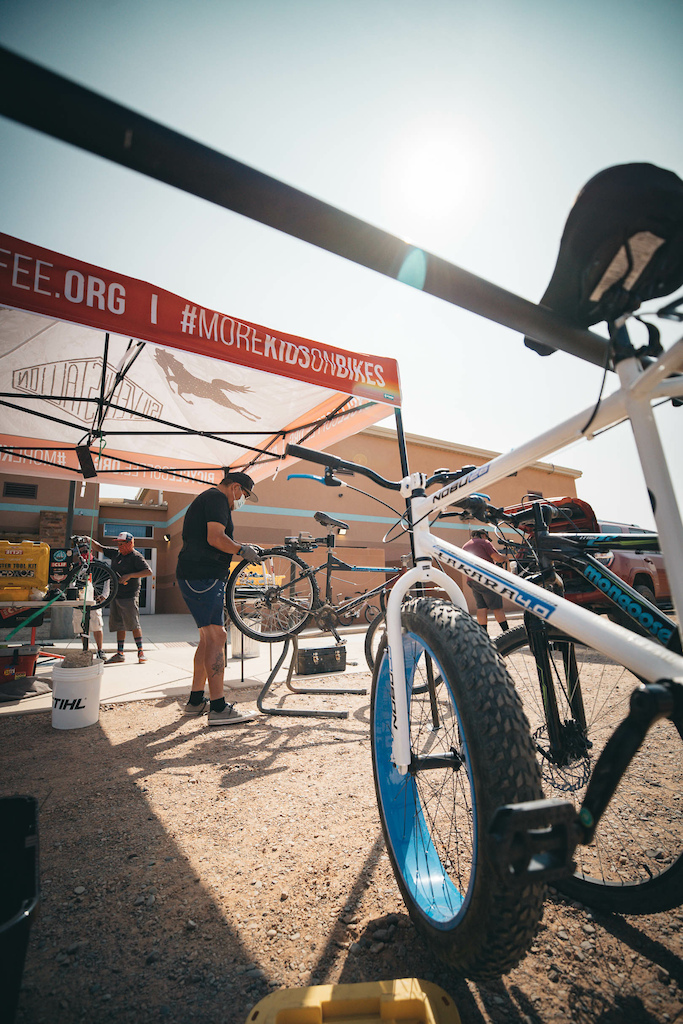 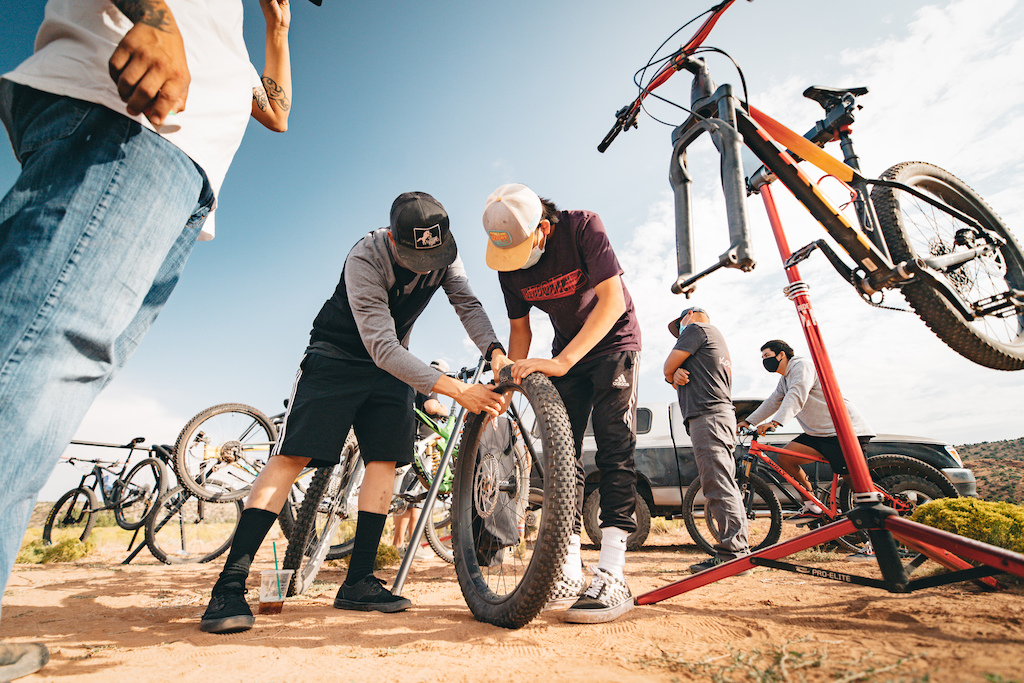 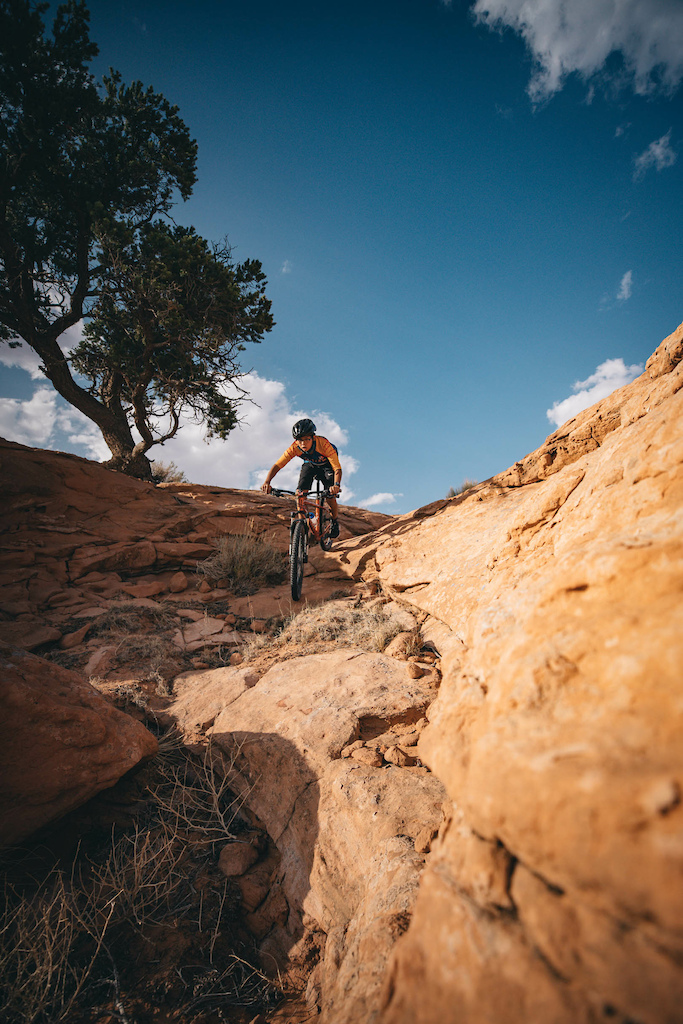 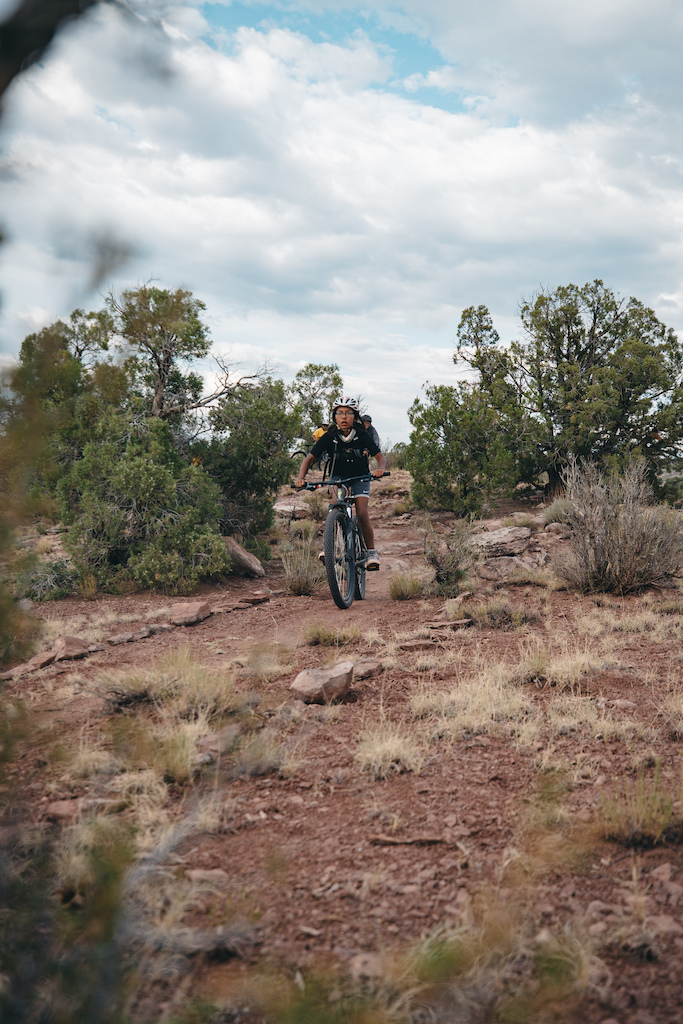 
The Stallion crew believes in bikes so strongly because they love riding them. The mechanics and community members looked forward to sneaking in a ride at most events. 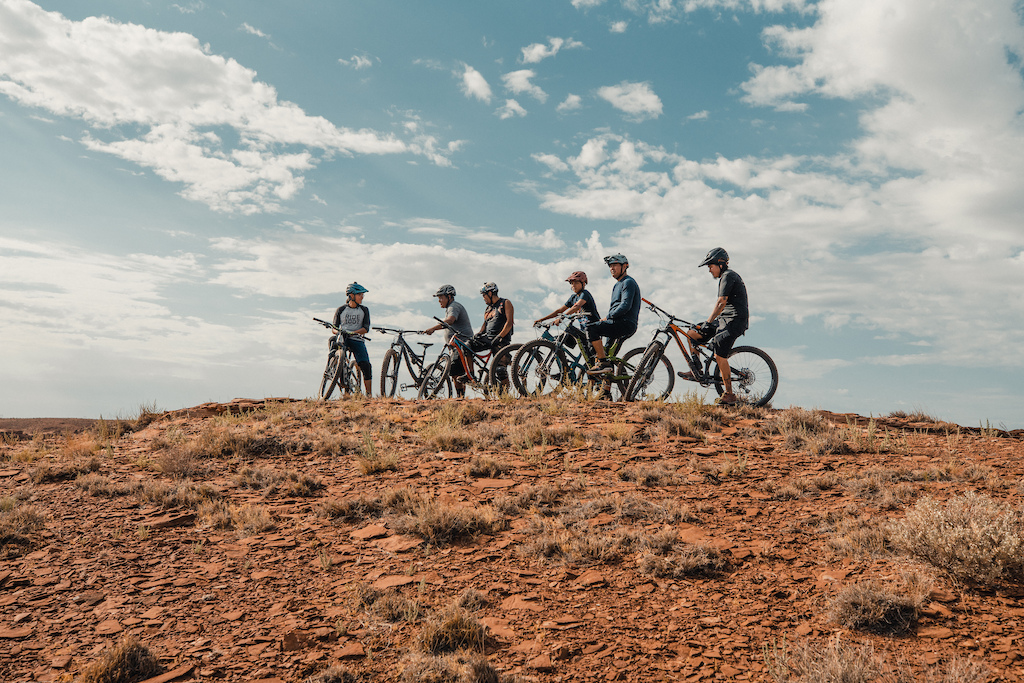 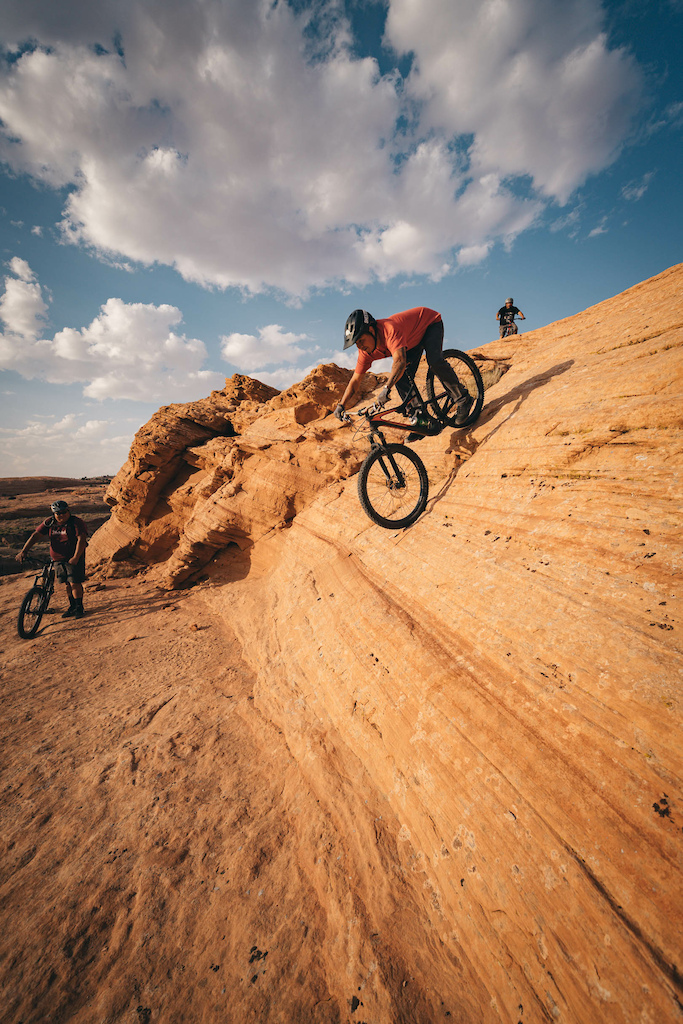 Lorenzo Manuelito is the first to drop this line in Kayenta AZ - Credit: Shaun Price 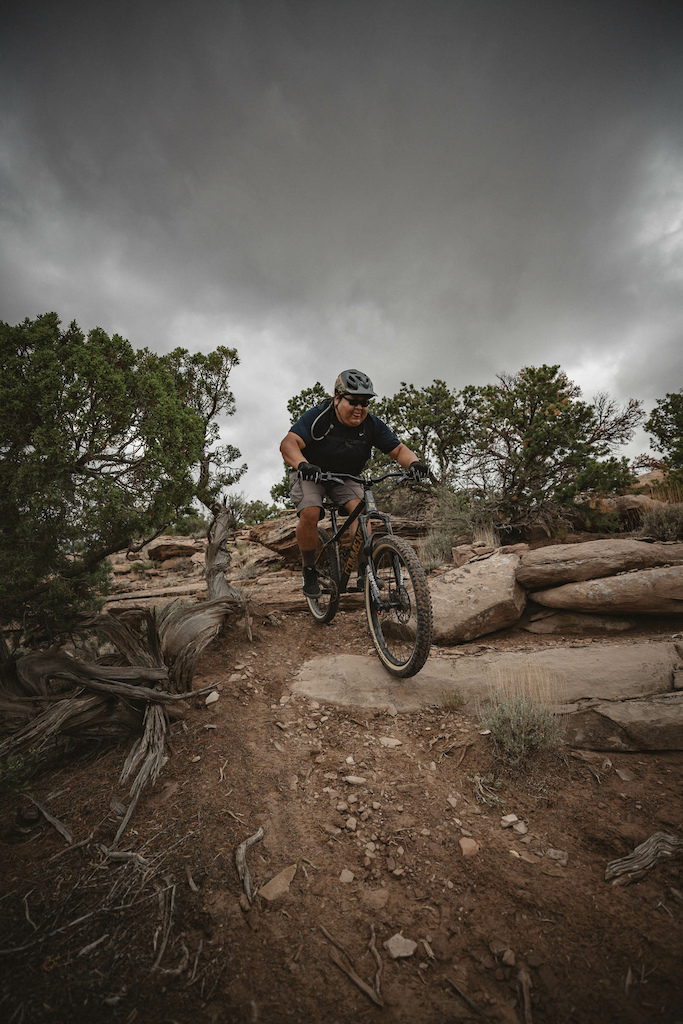 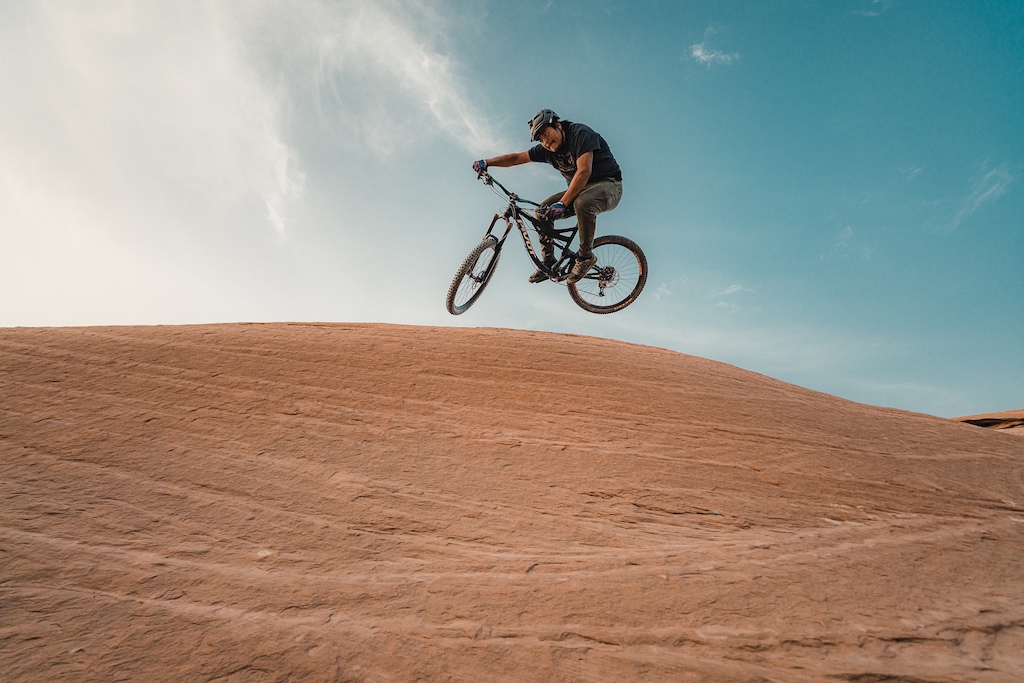 The Silver Stallion crew ended the bike repair season feeling successful; reception from the communities they worked in, and with, was overwhelmingly positive - to the point where they had to cut off the intake of bikes early at almost every event.

For Spring 2021, the Silver Stallion hopes to continue free bike repair, operating with the belief that cycling is one of the best ways for kids and communities to recreate and find joy during the pandemic. The Stallion also received such a positive response from this fall, that it was evident how essential the service of bike repair is across Diné lands. In addition to Spring 2021 free mobile bike repair, the Silver Stallion is fundraising for five kids’ mountain bike team-based groups modeled after their partners at Durango Devo. To support both efforts you can donate to the Silver Stallion Pledgeling fundraiser here . The Silver Stallion is also accepting in-kind donations for bikes and parts for their Devo kids teams. Please visit our website for more information.

The Silver Stallion would like to thank Stans No Tubes, ESI Grips, Squirt Lube, Sram, Park Tool, and Chris Mathis at the Clif Bar Pro Team along with the Catena Foundation, the Outride Fund, and the Southwest Indian Foundation for their contributions towards bicycle infrastructure in Gallup, NM and the Navajo Nation.

silverstallionbikes (Dec 16, 2020 at 17:35)
You are right! The Hopi Nation is nestled in the middle of the Navajo Nation, on the Arizona side. Manny works closely with Navajo communities as well, which is why we thought it was important to recognize that he just opened the first shop on a wide swath of land, including the Navajo Nation, that has not ever had any before!

owlie (Dec 16, 2020 at 17:42)
@silverstallionbikes: I lived in Flag, and have many friends from K town. Mad props to anyone supporting MTB in this region

Veloraptor (Dec 28, 2020 at 4:51)
Is anyone giving away bikes there? Is there demand from people on the reservations? Would be great to set up a bike donation conduit.