Sep 3, 2009 at 13:06
by Jordan Holmes
Tweet
I just got off the phone with the guys over at Freeride Entertainment to get some insight on how the concept came up, and how it all came together to shoot bike riding on the ocean in San Francisco. Mark Twain, a great American author once said "The coldest winter I ever spent was a summer in San Francisco", so how did Freeride Entertainment think it was a good idea to shoot this setup in one of the most un-predictable climates in the world?

DJ on a Barge in SF


by karl-burkat
Views: 58,480    Faves: 1,725    Comments: 154
When did you guys come up with the initial concept to shoot riding on a barge, on the ocean?
John Cowan and Derek Westerlund have been talking about doing this for a while, actually since the Hell Track was in Proctor, British Columbia. We spent a fair amount of time by the Kootenay Lake, where a barge was parked for a long time. We had talked to the owners of the barge a couple of times about using it but the cost was always too high, and the couple times it could have worked they were disagreeing on us using it. So, we put the barge shot on the back burner, but did not forget about it. 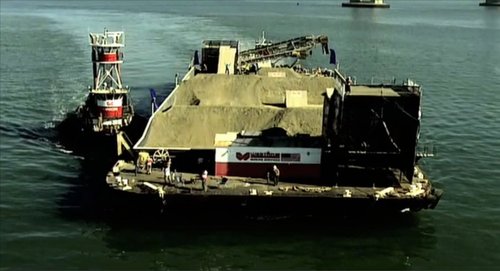 Recently Todd Barber from H5 Productions, the man behind the Rampage, moved down to San Francisco and still had the shot in his mind. He contacted us about it, and we told him we were still totally stoked on doing the shot. Todd has a history of getting stuff figured out in very tight time lines, so we had complete faith in him getting it setup. August 2nd Todd started getting things started for the shoot, and by the 27th of August the riders were practicing the jumps on the barge. Mega props to Todd for getting this figured out on such a tight time line.

Why the San Francisco Bay?
With Todd being there we knew he could get things going asap. He was sure he had the correct connections, and all his ducks in a row so we started thinking about it. There is actually a ton of landmarks in San Francisco that made for some awesome shots, but you will have to wait for the movie to see those. 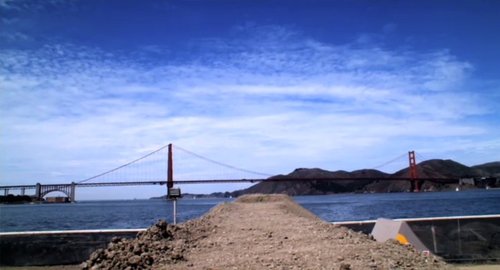 Who constructed the jumps on the boat? How long did it take?
John Cowan builds a ton of stuff for us. He's an extremely skilled rider and builder so we knew he could get it done. He started building the jumps on August 22nd, ending on the 27th, meaning it took him 5 days to get it all together. All the riders were pumped on the jumps, and they worked out perfect.

When did you guys start shooting on the barge, and how long did it take to get the shots you wanted? How did you shoot the barge?
As I said practice started on the 27th of August. We came in to shoot the barge on the 28th and ending the shoot on the night of the Giants game, the 29th. To get the shots we wanted we had to get in the air, and on the water, so we brought out the helicopter and rented 2 tug boats, one with a 40ft high tower on it to shoot the larger barge, which was being towed by the other tug boat.

We used 1 tug boat to pull the barge around to the spots we wanted, 1 tug boat was used for shooting along with the helicopter for aerial shots. We also had a film crew on the shore in front of the AT&T Stadium to shoot some distant shots from the shore. Everyone involved knew the time frame we had, and the cost that was related to this, so we had to get it done as soon as possible. 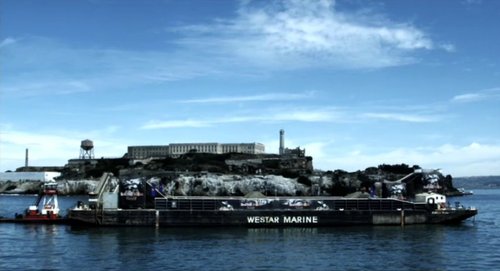 Who's backing the project?
This was all planned around being footage to be used in NWD 10, so obviously Red Bull played a large part in the project. This was the final stop for the Stumps, Clump and Jumps tour as well, so we had a bus full of awesome riders coming into the bay already so it worked out quite well. 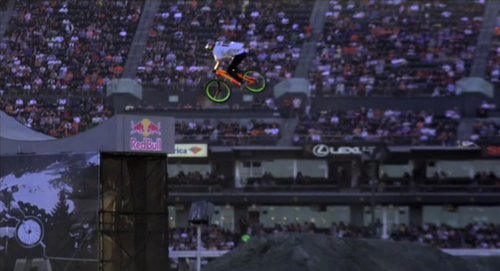 Was the jumping on the last day organized with the Giants game at all? Did they announce it in the 7th inning stretch or anything?
Nothing was said to the people involved at the ball game or anything like that. On the 29th we simply went out to get some shots with the ball game going on, it was actually the only day we got bad weather. It was super windy and the fog was rolling in, so we went out to bang off some shots. 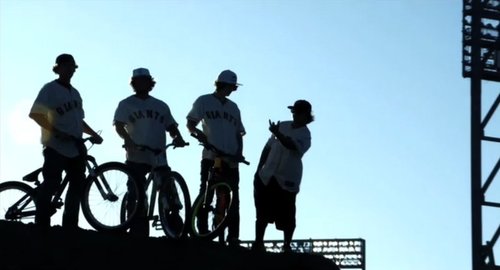 It was not announced or anything, but we did sound the barge horn so I am sure some of the viewers in the stands got a free show. All the riders were pumped to shoot with the baseball game going on in the background. They were rocking Giants jerseys and stuff, so it was awesome to see them having so much fun with such bad weather.

What was it like dealing with the people who owned the boats, and ran the ship yards? Was it hard to get things figured out during bad weather?
Not at all, we were all surprised. Hanging out with the shoremen was unreal actually. They were all super nice people, and really chill about the whole idea. They went as far as to weld things to the boats to help with shots, and even arranged a police escort to the bay over by the AT&T Stadium. They all kind of saw it as a free show, so I guess they were inclined to help a certain amount as they got to see some unique stuff that day.

Wow, we're all pumped on the little video clip that you are releasing so far and now we're really looking forward to Vegas!

seraph (Sep 3, 2009 at 13:38)
They should have set up some hips from the shore that could lead to the barge, that would have been epic and very Tony Hawk video game-ish.

Unhallowed (Sep 3, 2009 at 14:29)
I've been wanting to do that for a couple years as well... I live by the river and see barges full of dirt passing all the time. One day it just clicked that I should rent a barge and do it... I don't have thousands of dollars to blow on something like that though. I'm so stoked for NWD10

mtbwoodtrails (Sep 3, 2009 at 15:43)
haha okay now they are just showing off, what is it not enough that they can already do that on land? Apparently not. NWD 10 is going to be Awesome

Matt-W (Sep 4, 2009 at 4:22)
For a while i thought the collective were going to run away with all their wire shots and fancy sequences, but NWD definatley raised their game recently, looks like the new one is shaping up really good.

j-starkey (Sep 7, 2009 at 9:06)
NWD 10 is gunna b sick those are sum pimpn angles and shots. Alcatraz in the backround id staight up nutty! There goes some more bikers repping the bay

campofchampions Plus (Sep 3, 2009 at 17:50)
Love the heli shots where the angle makes the background go by fast but the rider is still regular. The pan to rider to pan past shot was epic. Yeah boys!

ellsworthman (Sep 3, 2009 at 21:17)
wow, the uplifted energy of a baseball field worth of fans, watching you do a healthy 3 out over the aqua must be one of the best feelings in the world. SHRED IT DUDES!

freestylekid (Sep 8, 2009 at 16:46)
does anyone know what song would be perfect for this segment(if somewhat inappropriate)? ill give you a hint: andy samberg is in it

Byangoma (Sep 4, 2009 at 11:10)
sorry to kill your dreams, but i'm pretty sure in a darren berrecloth interview about nwd10 he said it would be the last in the NWD series.

dontgosmall (Sep 3, 2009 at 22:48)
all u guys can suck it because i was dh riding right behind those guys in marin all of those days they were filming