by t3rribl3on3
Views: 2,496    Faves: 21    Comments: 4
Over the May bank holiday weekend, Havok Bike Park reopened its gates to the public for the first time in eight months. You may know the place from its previous name, Cockhill MTB Park or Dirt Trax, which was the company set up to run and maintain the centre. Towards the back end of last year, it encountered some difficulties and the park was forced to close. 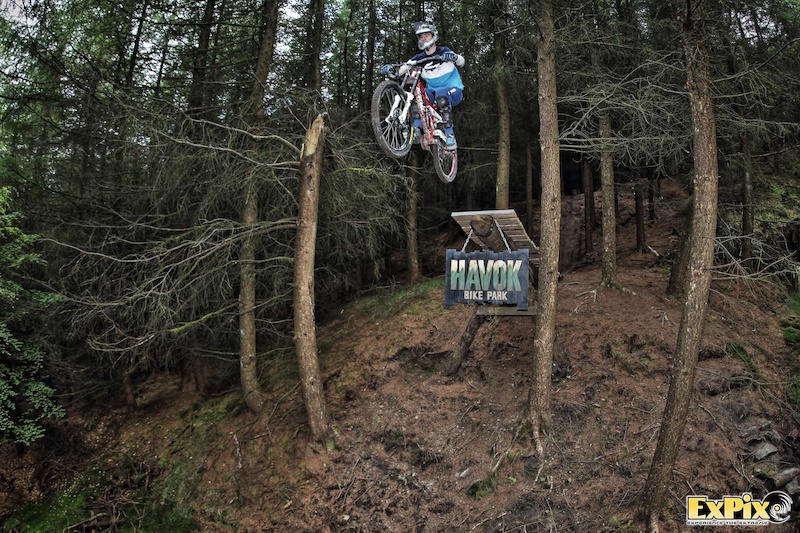 After putting blood sweat and tears into the trails and missing having a good local spot to ride, a few of the regular builders and riders; Mathew Lambert, Joe Devereux, Tom Jefferies and Danny Wilson decided to team up and make it happen for this place again. 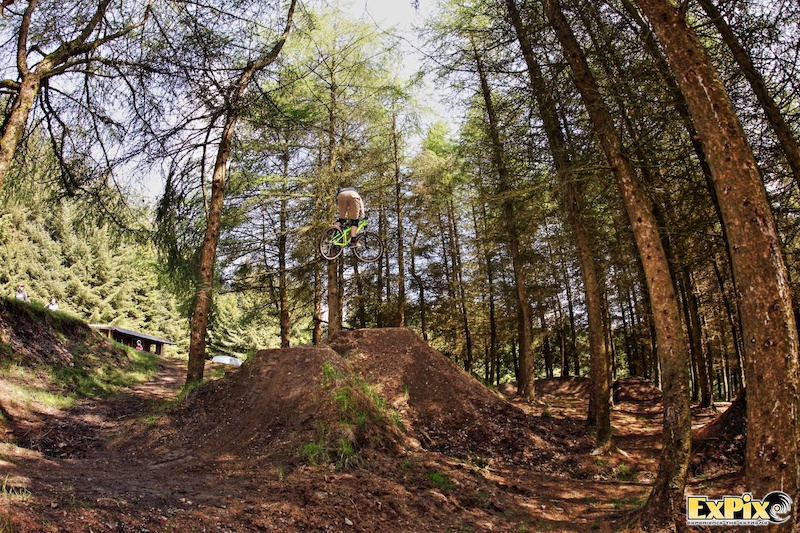 After negotiations with the land owner the newly formed team set up the company Havok Bike Park Limited to sign the land lease agreement and brand the bike park under. Trail maintenance followed to repair the damage from the flooding and fallen trees over the winter in preparation for the Annual PMBA Enduro round. This event helped raise the funds to make the first payment to the landowner and ultimately open up again.

A 7am start after camping in the woods, the to-do list consisted of a bacon butty, some last minute bits of taping out the tracks, applying some roofing felt to the wooden features and an inspection of all trails. All was on schedule until a call came in at 9.30am asking for the gates to be open to let the queue of cars in. With the cars and vans starting to fill the quarry and the sun shining we started signing in the first few riders, the event was supported by a whole host of companies including; Olfi Cameras, Five Ten, Hope Technology, Airshot, THE Industries, Bang Energy and more. There were lots of prizes and giveaways to be won. 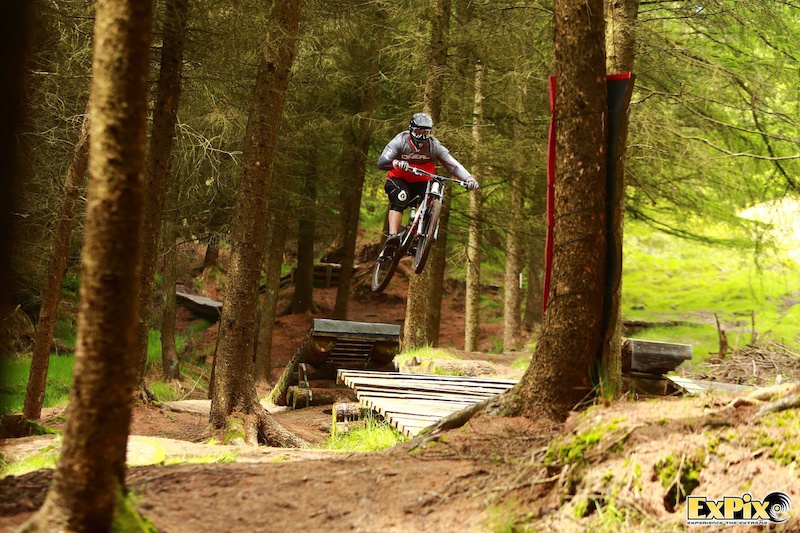 This was the main day with over 70 riders up in the woods having fun shredding the trails, thrills and spills all round. The whip off contest was a major highlight with big crowds and the riders getting as sideways and loose as possible on their bikes. Young ripper, Huey Walker came away with the win and a brand new Olfi 4k Camera. Then it was on to the Gas to flat competition with riders pushing hard and landing with a crunch, Milton Ashworth took the win and walked away with an Airshot tubeless inflation system, a seemingly fitting prize.

The only downside of the day was a rider, unfortunately having to be airlifted to hospital after a crash on one of the freeride lines. We pass on our best wishes for a speedy recovery to Michael Mayze. Wherever you went on the hill all weekend, there were bikes flying past, riders smiling and having fun and there was never a dull moment. Matthew Coleman won a prize for being the first rider of the weekend to add his name to the list of people who have hit the infamous Havok Gap, making him number six and earning the nickname, the Havok Hero in the process. 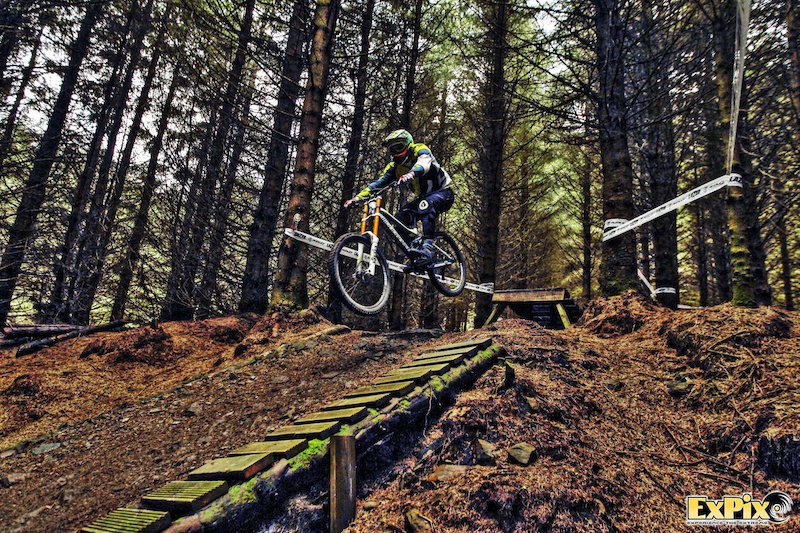 The future is looking bright for the park now, it has two downhill lines, three freeride lines and dirt jumps, a strong team behind it and big plans going forward. Trails for every level of rider and always something to challenge you, it’s exactly what a bike park should be, come down for yourself and check it out. Lastly, a thank you for each and every rider that came to make it such a special weekend and for every company that supported the opening event. The park is back on two wheels and rolling fast.

Credit to Expix for the photos, Danny Wilson for the video.
Check out their facebook for the latest updates: http://www.facebook.com/havokbikepark

gkeele (Jun 1, 2016 at 7:55)
I had to go from this article, to the facebook page, and then zoom out on a Google map on their website just to figure out where this place is (Burnley, if anyone else was wondering). Not a perfect start in terms of getting the information out there to the public... still keen to visit next time I'm oop North!

pigman65 (Jun 3, 2016 at 10:58)
@Konakonakona-Chameleon: Where's that ? Nearest town without enlarging too much is Burnley,
anyways it's up north

nsbichboy (Jun 29, 2016 at 13:53)
Havok Bike Park is a push up downhill mountain bike venue nestled in the Pennines of West Yorkshire.

We aim to cater for a wide range of abilities across our 6 different trails. We have 1 dirt jump trail, 2 downhill trails and 3 Freeride trails with plans to expand in the future.

The dirt jumps start small with a boner log feature then into a much larger set.
The 2 downhill trails, one Red, one Black aren't your full on downhill trails like some of the bigger UK uplift venues due to the size and gradient of the hill. The Red is more of a flowy jumpy trails with the black being more technical, rutty and rooty.

Over on the Freeride side of the hill there are 3 lines, one beginner, one intermediate and one huge line offering a great area for riders to progress their jumping skills.

At the moment we are only open at weekends with the gates being open from 10am till 5pm.
Please let yourself in through the 2 gates closing them behind you and park up in the quarry area part way up the fire road into the forest.
Once you have kitted up and got your bike ready to roll make your way up to the sign in hut before getting your shred on.

expat-taff (Oct 5, 2016 at 11:54)
Any plans to open during the week in future? I have time off through the week but struggle to get a pass from the missus at weekends. Will you guys be offering yearly memberships at any point? I've just moved to Leeds so will be coming to scout it out soon.

t3rribl3on3 (Oct 11, 2016 at 7:22)
@expat-taff: yes we do open on the odd Friday best thing to do is message their Facebook page. Yearly membership are also available now too. All the details you need are on the facebook

nsbichboy (Jun 1, 2016 at 7:58)
YES!! Hyped to see this plebe on the home page and getting some recognition. Suck a sick little venue that can only get better. Props on the edit Danny.

TaiuSofHebdeN (Jun 1, 2016 at 8:24)
quality weekend, great to have the local back open again. top effort lads.