$3500 CAD
This is a Large 2016 Transition TR500 for sale. I work at a bike shop in Revelstoke and I purchased this bike brand new in May of 2016. However, I have only ridden it twice this year as I have spent my season riding my trail bike. Despite some cosmetic blemishes, it's in awesome shape. It has 2 brand new tires, brand new brake pads (front and rear) and all of the bearings were replaced at the beginning of August. While I've really enjoyed Transition's DH bike, I just don't ride too much bike park anymore and it's a waste to have it sitting around. I'm happy to ship it anywhere, although only at your expense. No trades! 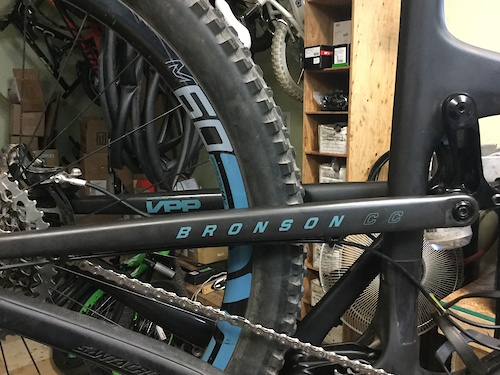 $5000 CAD
*** Bike is located in Revelstoke, B.C *** 2017 Santa Cruz Bronson CC X01 Eagle, with Enve wheels for sale! Here is your chance to get your hands on one of the top build kits from Santa Cruz for about $5000 less than the original MSRP of $11249.99. This bike has been ridden for about 4 months and has received regular maintenance; recent servicing includes front and rear brake bleeds, new shift cable/housing and pivot disassembly/re-grease. I work at a bike shop in Revelstoke and it's simply time for me to try something new. I'm willing to ship anywhere, although only at your expense.

$2500 CAD
2015 Enduro Elite 29, size large for sale. This is a great option for those of you who are looking for a "do it all" platform that will enable you to enjoy just about any kind of riding; from DH laps at Whistler, to all-day XC epics, to your local enduro series. I am the original owner and have thoroughly enjoyed riding this bike over the last two seasons, however it is time for me to try something new for 2017. While I am firm on the price, the bike does come with 3 extra tires and a recently-serviced Cane Creek DB-Inline that has not seen any use since coming back from the factory. A few parts have been swapped out/upgraded as various components wore out. This bike has also been regularly maintained by professional technicians since purchased in 2015. I am happy to ship the bike just about anywhere, although only at the buyer's expense. Please feel free to message me if you would like to check it out or if you would like more photos! Recent Maintenance: All frame bearings replaced in July of 2016 Fork serviced in July of 2016, seals replaced Shock serviced in July of 2016, seals replaced Brakes bled in September 2016, new brake pads installed in July of 2016 Upgrades: RockShox Monarch Plus rear shock Thompson DH Handlebar (780 mm) New grips (generic Specialized grips) New seat (Specialized Henge 143mm width) Extras Included With Sale: 1 Cane Creek DB-Inline Rear Shock (Recently serviced by Live to Play Sports and has not seen any use since) 1 Specialized Purgatory Tire (29x2.35 Grid 2Bliss - almost new) 1 Specialized Butcher Tire (29x2.35 Control 2Bliss - 50% worn) 1 Specialized Slaughter Tire (29x2.35 Control 2Bliss 50% worn) Highlights of Part-Spec: Fork - RockShox Pike RC (160mm of travel) Shock - Rockshox Monarch Plus (3 compression adjustments and rebound adjustment) Drivetrain - Sram X1 1x11 Brakes - Sram Guide R Seat Post - Specialized Command Post (150mm of travel) Wheels - Specialized Traverse 29 (142+ rear hub spacing w/XX1 driver body, 15mm front hub spacing) Cranks - Sram X1 w/28t chain ring Tires (Specialized Butcher 29x2.35 Grid 2Bliss - Front and Rear) Cheers!

$2000 CAD
2012 Element 70 MSL, size Large for Sale. The bike has been used regularly for 3 seasons now, but it has been well maintained. Both the fork and the rear shock have been rebuilt and had seals replaced every season, including this year. In addition, the rear linkage was pulled apart at the end of 2013 and all of the bushings were replaced. A few parts have been upgraded and replaced as stock components wore out, however, many of the original parts which were taken off of the bike can be included with sale (Shimano XT cranks, Easton EA 70 bar and stem). Part Spec is as follows: Fork: 2012 Fox F120 with Fit Cartridge (Rebuilt with seals replaced in July of this year) Shock: 2012 Fox RP23 (Rebuilt with seals replaced in July of this year) Brakes: 2012 Shimano XT (New pads in 2013) Drivetrain: Shimano XT Shifters, Shimano XT rear derailleur, Shimano XT front derailleur Cranks: 2013 RaceFace Next SL with Titanium Spindle Stem: 2013 Race Face Turbine (90mm, 0 degree rise) Bar: 2013 Easton Haven Wheels: DT Swiss X1600 (Tubless ready, but currently using tubes) Tires: Schwable Nobby Nic (front), Schwable Racing Raplh (rear), both have seen about a season and a half of use. More pictures available upon request.