Jul 15, 2022 at 15:34
by Travis Engel
Share
Tweet
43 Comments
When Trek launched the Fuel EX E just a few days ago, the biggest news was not the Fuel EX E itself. It was the motor that drives it. Trek likes to use the right tool for the right job, having chosen the minimalist Fazua motor for their cross-country Supercaliber and the full-power Bosch for the heavy-duty Rail. Problem is, there weren’t a compelling option in between the two that would suit the Fuel EX E. But there is now. 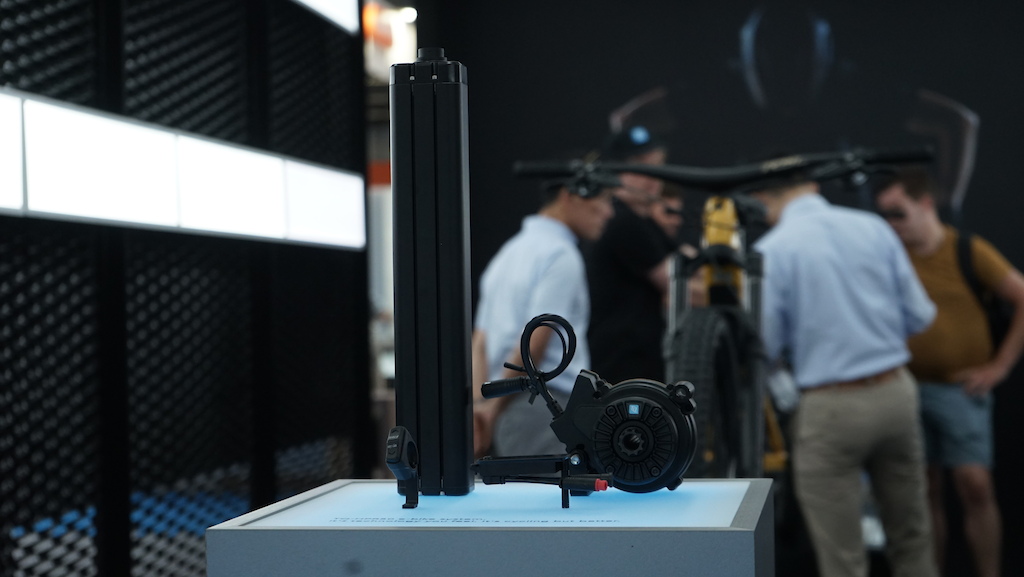 Hidden among the countless wholesale e-bike-component booths that tessellate Eurobike 2022’s remote Hall 8, TQ Systems started buzzing with activity the moment the show opened. With experience in industries like robotics, aerospace, and medical technology, the Munich-area engineering firm may seem like they’d be a little above making parts for electric bikes. But one of their specialties happens to be just too perfect not to be on a bike. 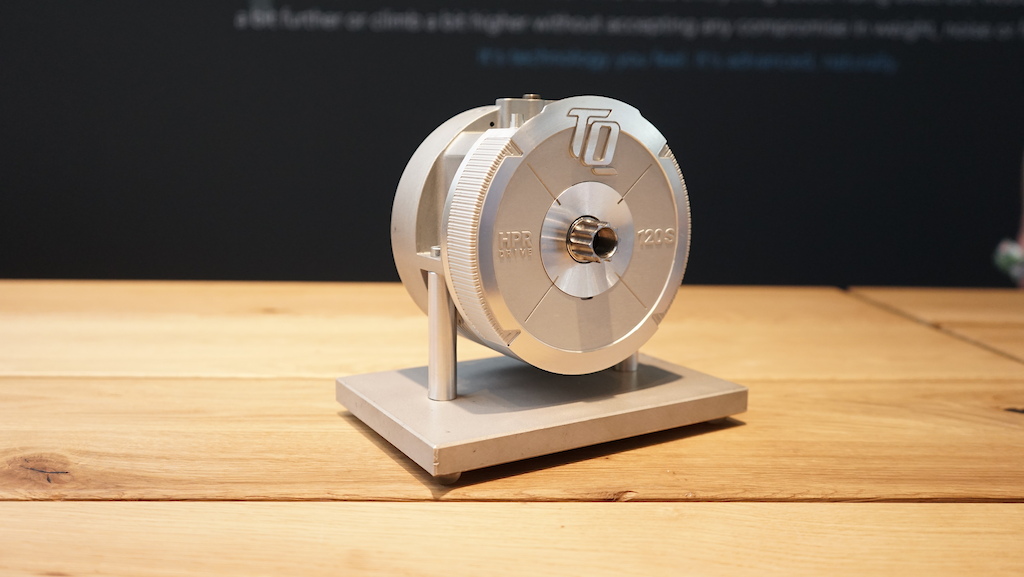 Despite the very futuristic name, ”harmonic pin ring,” TQ’s motors aren’t new to bikes. They actually entered the market over a decade ago with this beast first featured on some models from Haibike. It offered 120 Nm of torque. By comparison, the full-power Shimano EP8 offers 85 Nm. The new IQ motor used on the Fuel EX E is the result of dialing back that overkill with the benefit of 10 years of experience. You can read what all that means on the trail in Matt Beer’s review of the Fuel EX E. It covers loads of details that we won’t cover here, including the most important one: how it rides. But what we wanted to understand, at the most basic level, was how it works. 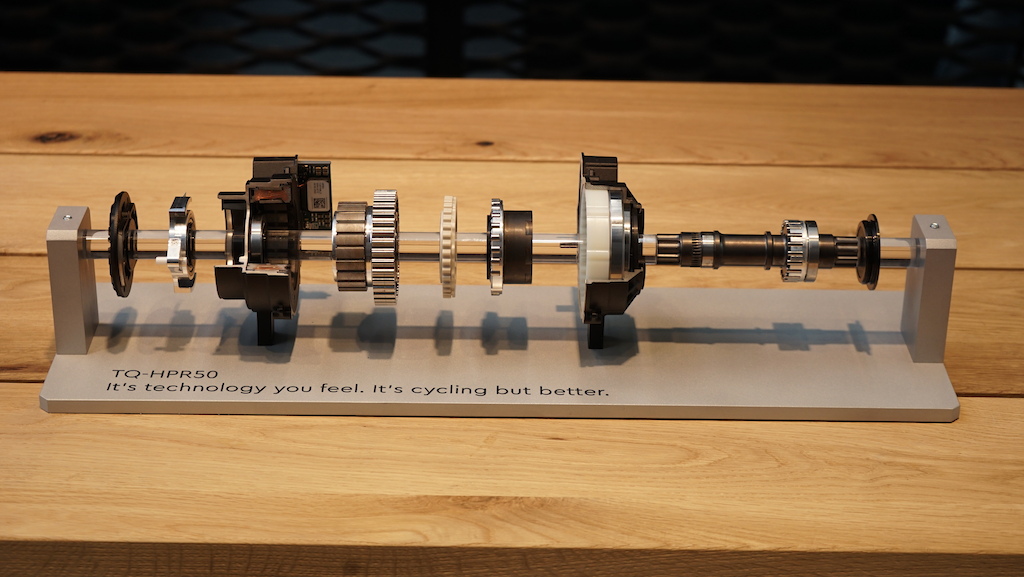 Thankfully, there were a couple bits and pieces of TQ’s motor at their booth, though by the time we got there, TQ had hidden them because too many suspicious competitors were taking too many high-resolution photos. The exploded version of the whole motor, to an untrained eye like mine, just kinda looks like… a motor. But what it doesn’t look like is an e-bike motor. Traditionally, an e-bike motor needs a device that offers “reduction,” which I put in quotes because I needed TQ to explain it to me. In the case of an e-bike, it’s the method used to get a front chainring spinning at the desirable speed and with the desirable amount of torque. This is usually done with a belt or a chain or a stack of cogs. But TQ does it with its harmonic pin ring. And because it’s concentric to the rest of the motor components, it’s almost hidden among them. That’s why the Fuel EX E’s motor unit is so small and light. 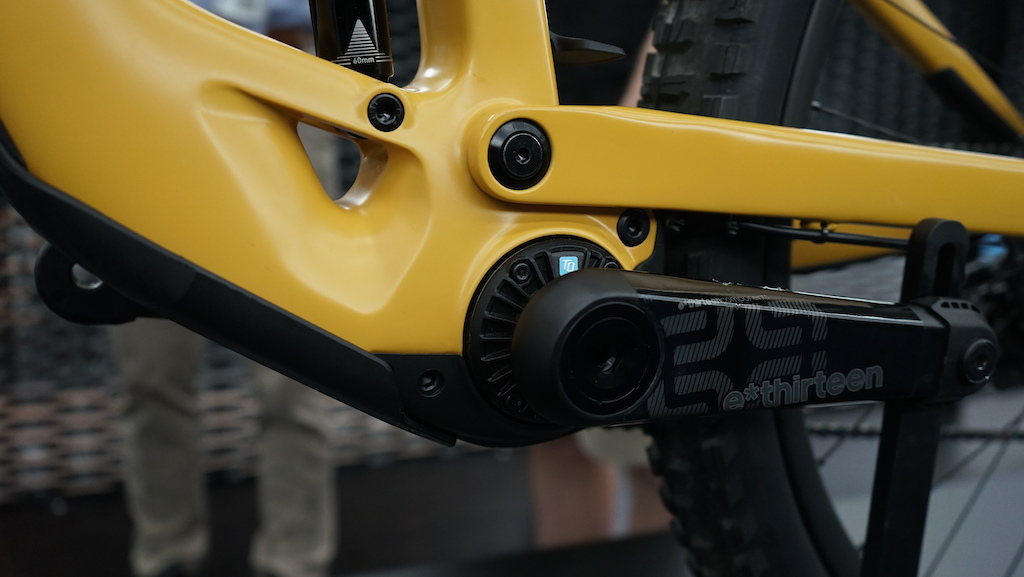 While electric motors are good at spinning fast, they need reduction to turn their natural talent for speed into something more useful on an e-bike. The TQ e-bike motor’s approach to the harmonic pin ring concept does this in a unique way. There is an inner gear that is on an eccentric, which is driven by the motor. It is one tooth smaller than the outer gear, which will be what drives the chainring. Because that inner gear is not rotating around its own center, but around the center of the bearing to which it is attached, it forces the gears of the outer ring to move, just much slower than it does. 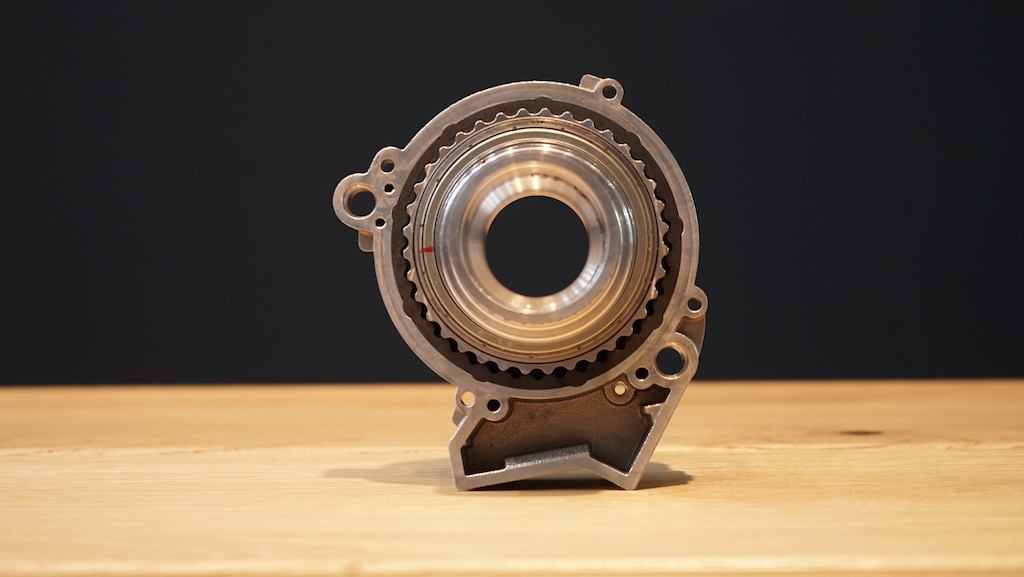 There are benefits to this beyond light weight and small size. It creates an instant, direct relationship between input and output. That’s why it’s so useful in robotics. This is similar to the mechanisms used in robotic open-heart surgery. It’s why the power comes on so naturally on the Fuel Ex E. It’s also why it’s so quiet. There’s no slop like there is when there are gears on gears on gears. In fact, the teeth of the inner gear don’t ever really leave the teeth of the outer gear. They almost just slide over each other. And that’s fine, because there’s very low friction between the two. The inner ring is aluminum, but the outer ring is a sort of polymer. But still, TQ has tested their motors to over 20,000 miles, and they still behave like they were designed to when they were new. 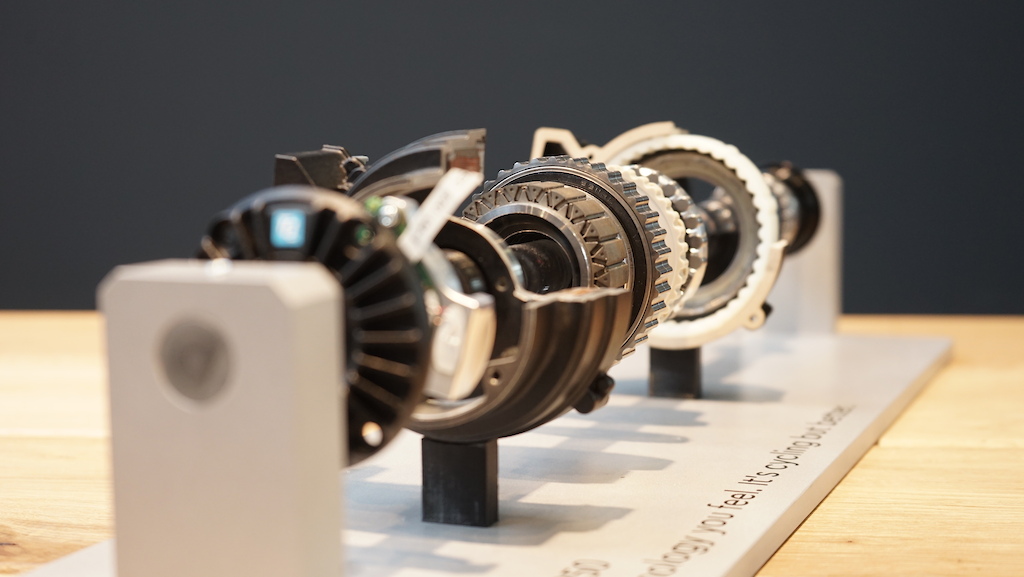 It just takes a very high degree of precision to make a system this durable and this efficient, so despite its simplicity, it’s still a pretty pricey little gadget. But time will tell if that changes down the road. The TQ booth was filled with representatives from other brands, ready to get in line. And though, like Fazua, Bosch, and Shimano, the motor itself will stay more or less the same as we see it pop up on other bikes in the coming years. But it could also be scaled up, or even scaled down to fit other applications. And when it does, now you won’t have to wonder how they did it.

tremeer023 (Jul 18, 2022 at 11:49)
@smoothmoose: Well, I think it was supposed to be a bit of a tongue in cheek insult for starters.
I think it insults riders who don't need to rely on a motor to make cycling better though. There is almost a subtle assumption that the only way to make cycling better is with a motor.
Maybe I'm just reading too much into it.

Also, these motors should have an impressive lifespan (depending on seals and bearings).

Namrek (Jul 18, 2022 at 2:20)
This is not the explanation for the gearbox shown. TQ's new gearbox is a so-called G-rotor or Gerotor. Originally developed decades ago (1921) for industry pumps.

The named Pin-Ring gearbox is also different, as the name implies, it uses multiple pins mounted on an oval rotating ring. TQ uses the pinring name simply because that's what they're known for. They used it also for their first e-bike product some years ago.

The Harmonic Drive in your video is something completely different in design and has nothing to do with TQ.

Richridesmtb (Jul 18, 2022 at 3:12)
@Namrek: I've now watched other TQ videos and agree that it looks more like a georotor and not a harmonic drive. Makes me wonder why they went for that design, the harmonic drive seems better balanced.

Namrek (Jul 20, 2022 at 8:08)
@Richridesmtb: Quite simple: they prefer a low gear ratio below the typical 40-50, around 15-20, in order to run the entire system at relatively low speeds and an accompanying lower noise level. The aforementioned Harmonic Drive does not work with such low ratios, so they choose a cycloidal drive or G-Rotor design that manages the full ratio in just one gear stage.
The disadvantage of this concept is that you still have relatively low power and torque at the output. This is not enough for a powerful e-bike with excellent climbing behavior in really technical steep terrain.

justinfoil (Jul 16, 2022 at 7:50)
@b45her: I think they meant that smallish DC motors don't have a lot of power, especially at low speeds, even though they can produce a lot of torque, relative to size and weight, at those low speeds.They need to run faster than a bike needs in order to get the power that a bike needs, hence the need for reduction gears such as a planetary set or harmonic drive. Not necessarily that the motors will wear out before anything else.

tacklingdummy (Jul 15, 2022 at 23:56)
Now they come out with the better technology after I already bought a heavier ebike. Blah. However, the heavy ebike is much better than I thought it would be. Definitely legit given I have a overuse knee problem.

rickybobby18 (Jul 16, 2022 at 12:53)
Get used to a frequent upgrade cycle if you ride an electric mountain bike and want to have the latest and greatest. Electronics improve quickly.

eddiecycle (Jul 16, 2022 at 15:39)
Tangent was making a retrofitable ebike motor called the Ascent that was using the same reduction method (it's called cycloidal reduction). It was a lot bigger and heavier, but also 6000 watts. I'm glad to see a mainstem brand using the same tech in a miniature package

rideordie35 (Jul 15, 2022 at 17:34)
Harmonic drives and similar strain wave gears have been around since the 1950's and are not proprietary. Most other manufacturers currently use planetary gear sets to achieve a similar effect.

IMeasureStuff (Jul 15, 2022 at 19:01)
Like car manufacturers, the ebike motor manufacturers are heavily invested into their particular motor setup and will incrementally evolve their systems over time. If this system turns out to be much better than planetary gears then they may move across over time, but thats years away.

dfiler (Jul 16, 2022 at 10:48)
This technology is already in widespread use. Robotics used in manufacturing need extreme accuracy. Because this provides an extreme ratio reduction with no backlash, it allow precise movement/orientation at the same time as a ton of torque.

It's exciting to see this come to cycling. Fingers crossed it decreases the weight and size of ebike motors.

stubestrong (Jul 16, 2022 at 23:41)
I’m told by industry friends to avoid TQ like the plague
Below threshold threads are hidden

Really? Your whole job is bikes, bikes have gears, and gear ratios, and "reductions". If you truly needed it explained, beyond the jargon factor, wow. If you're just playing dumb in order to, what, not alienate some allegedly dumb enduro bros, just stop.