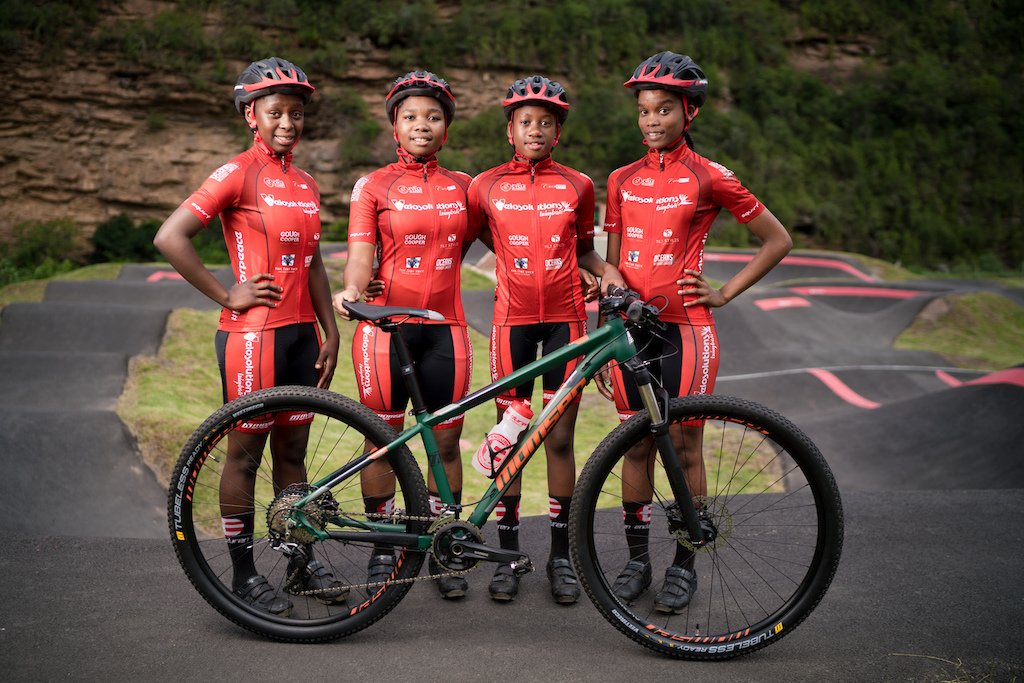 Velosolutions’ new team to challenge for the rainbow jersey, in a few years…

The likes of Jolanda Neff, Annika Langvad or Kate Courtney may have not heard of Amahle Cane (14), Aphiwe Goge (12), Ongezo Mini (16) and Nomfundo Mtshali (16) before, but they have their sights on the stripes and more determination that you can imagine. This could be a dangerous combination for the other riders looking for that top spot in just a few years…


Young ambitions like that of Aphiwe, are the lifeblood of the team, and significant motivation for Velosolutions as they join forces with, Peschl Sports and the GO!Durban Cycle Academy to empower an all-female team of young riders called "Velosolutions Izimbali” and enable them to achieve their dreams.

Previously in South Africa, there has been little to no support for African women in cycling, and there has never been a team dedicated to the elevation of black female riders. Velosolutions took the chance to change this and now supports a team of young women from the townships around Durban.

The non-profit organisation ‘GO!Durban Cycle Academy’ was launched in 2016 as a partnership between the eThekwini Transport Authority (ETA) and Durban Green Corridors (DGC). The goal was to create a safe space for disadvantaged young people to play and learn through sport. The program provides free cycling training, academic support and life skills for youth aged 7 -18 at many bike park sites in the region. Since then, the academy has been promoting a healthy and active lifestyle by encouraging cycling in communities, whether it be for recreation, competing or commuting.

The synergy between GO!Durban Cycle Academy and Velosolutions came together with a bang in March 2018 when the first Velosolutions Pump Track in the province of Kwa-Zulu Natal, South Africa, was built in KwaDabeka, a township located 30 minutes outside of Durban. The South African qualifier event for the inaugural Red Bull Pump Track World Championship was held there in April 2018, and the track has since become a hive of cycling activity in the community. 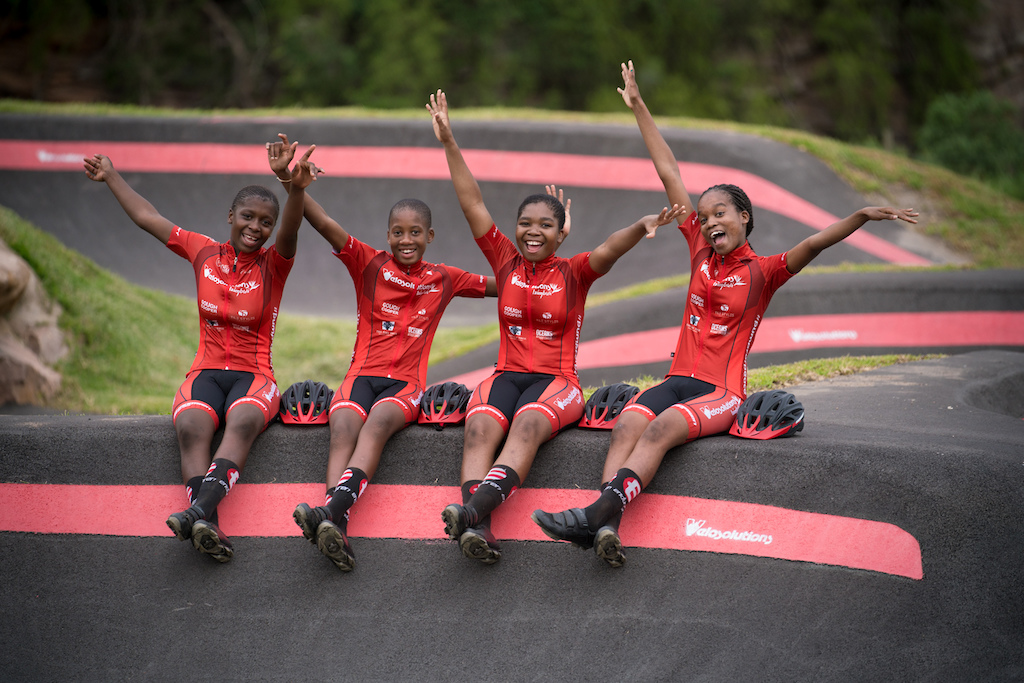 PaperbackRider (Jan 24, 2019 at 4:11)
Feels like an installment of 'Humbled' for us all. This article has more relevance for the MTB community than 563.125 Yeti reviews combined.

Oolex (Jan 24, 2019 at 4:14)
Hell yeah! Excited to see how these young ladies progress. I'm hoping there are great things in their future.

vinay (Jan 24, 2019 at 10:25)
So cool. They'll become the Peaty and Athertons for this part of the world. To make them proud, inspire even younger kids and show how much fun riding can bring you. And how much in turn the fun that you're having will enable you to face and do. Enjoy!

On bike sales for Velosolutions...

tinmug (Jan 24, 2019 at 7:51)
Awesome. A million points to Velosolutions and Momsen for the faith in these young stars. And nobody on the UCI circuit has a name as cool as Aphiwe. Love it.

geephlow (Jan 24, 2019 at 8:58)
Ngikufisela impumelelo! Looking forward to seeing riders from Velosolutions Izimbali end up on the pro circuit down the road!

tunnel-vision (Jan 24, 2019 at 13:42)
So much athletic potential in these areas. Good to see some opportunity coming their way.

blowmyfuse (Jan 24, 2019 at 8:43)
I came here for the inappropriate commentary on the word "talent".
Forgot this isn't drunkcyclist

Nice to see them get some support, but this feels like little more than a marketing job for Velosolutions. Like when that big company makes a 'diversity' hire to create an image...

mh731 (Jan 24, 2019 at 4:33)
it tells you in the article......"Previously in South Africa, there has been little to no support for African women in cycling, and there has never been a team dedicated to the elevation of black female riders. Velosolutions took the chance to change this and now supports a team of young women from the townships around Durban."

Try reading it, and you may learn something

How exactly am I hung up on gender or race? To me they are just my fellow human beings. I don't see their gender or 'race'. Again, the article did well to highlight those points. I merely commented on them.

Last time I checked there is only 1 'race'; The Human race.

Bring on the downvotes snowflakes! I made you rethink those warm fuzzy feelings you got inside from reading this article.

I know critical thought is hard, but try it sometime. It IS much better than complacency/apathy.

You can still feel warm and fuzzy inside.

VwHarman (Jan 24, 2019 at 6:42)
@m1dg3t: I expected someone to make a comment along this line, and think for the most part you tried to make it in a reasonable way, until you called everyone a snowflake. I often am skeptical of similar efforts where I doubt the objectives of a large corporation (see Nike’s Kapernick ad-I support what Kap is trying to say, but I feel Nike capitalized on his popularity within a certain demographic. That said, making biking more accessible is what Velowolutions does. To me, this seems to be in perfect harmony with what that company is trying to do. Your concern and skepticism are good, and healthy. That said, I think it may be unfounded in this instance.

Reading comprehension; you are lacking. Like the vast majority...

This place is worse than Plato's cave. LoL

VwHarman (Jan 24, 2019 at 19:48)
@m1dg3t: I suppose you didn’t call everyone a snowflake, that’s fair. That said, if you read my comment, I think you aren’t being honest to suggest I didn’t comprehend what you said. In fact, I have given you credit for mostly making reasonable points of concern, until your snowflake comment. You just want to make yourself feel like some kind of social renegade that isn’t concerned if your super informed opinions might offend others. The offence doesn’t concern me, what you said wasn’t directly offensive. If you want to start the conversation, engage in the conversation. You just want to spout points, not consider ideas. Find a new way to puff your chest bahd, you’ll find your barking up the wrong tree here.

People like you are what's wrong with the world.

VwHarman (Feb 6, 2019 at 8:14)
@m1dg3t: I agree. People like me are what is wrong with your world. People like me that engage someone like you and try and get you to further elaborate your point. The reason I am what is wrong with your world is that once someone like you has been asked a couple basic questions your sense of superiority falls apart since you don't actually have a clue. At that point, as opposed to actually communicating and sharing ideas you go to ad hominem comments and expose the fact that you are just spouting your feeling and opinions, and nothing you say is based in any kind of factual statement. Enjoy your bubble bahd, i'll be waiting to see how many weeks it takes you to put together a response to this.

The irony is that based on your comments above I actually thought there may be a chance for a bit of interesting exchange. I studied Anthropology and there are some actual anthropological and biological arguments that support your earlier comment about race being not a social construct more so than any actual genetic variation. Too bad you can't help but argue like a little boy that wants marshmallows in his cereal.