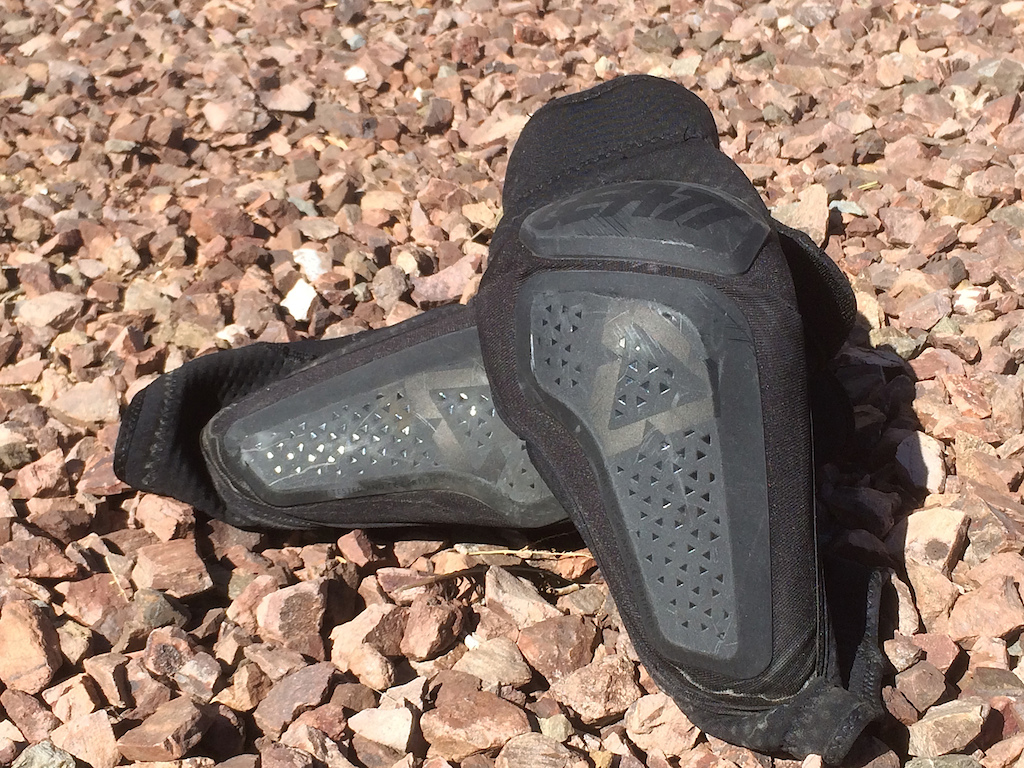 Leatt’s 3DF 6.0 knee guards are streamlined, yes, but they also offer more protection than you'll receive from the many knee guards out there that are, by comparison, heavy-duty knee warmers. And, yes, I realize that's a loaded sentence, but I'll get to my biases in a moment. First, though, the basics...

Leatt took a flexible chassis and paired it with a bit of hardshell protection. In short, the 3DF 6.0 is a hybrid pad of sorts--the benefits of soft and hard-shell armor in a fairly svelte package that you can comfortably pedal around in in all day, and yet still rely on when you really cook a corner and hit the deck.
Leatt 3DF 6.0 Details
• Soft knee guard w/ co-molded hard shell
• 3DF AirFit ventilated, soft-impact foam
• Meets EN1621-1 knee-protection standards
• Anti-slip calf band and silicone grippers
• Anti-odor MoistureCool and AirMesh fabrics
• Weight: 530 grams
• Available in black (tested), blue/black and white/black
• MSRP: $89.99 USD / €99,99
• www.leatt.com

Out of the Box
Leatt says the 3DFs feature a “pre-curved 3D design” and there is, indeed, an attempt here to create a pad that naturally conforms to the shape of a bent leg. The chassis is constructed from a variety of fabrics that are touted as being cool and fresh, which is just another way of saying that the fabric has some kind of anti-microbrial treatment designed to keep it from smelling like road kill.

The actual protection element is handled by a combination of foam inserts covered by more fabric and those impact-resistant plastic knee cups and shin guards. The plastic bit actually covers a decent chunk of real estate without adding any real bulk to the mix, so you don’t wind up smacking guards against handlebars during awkward and slow, tight turns. The 3DFs meet Europe's moto EN1621-1 knee, elbow and shoulder guard safety certifications—meaning they're more than up to snuff for mountain biking. 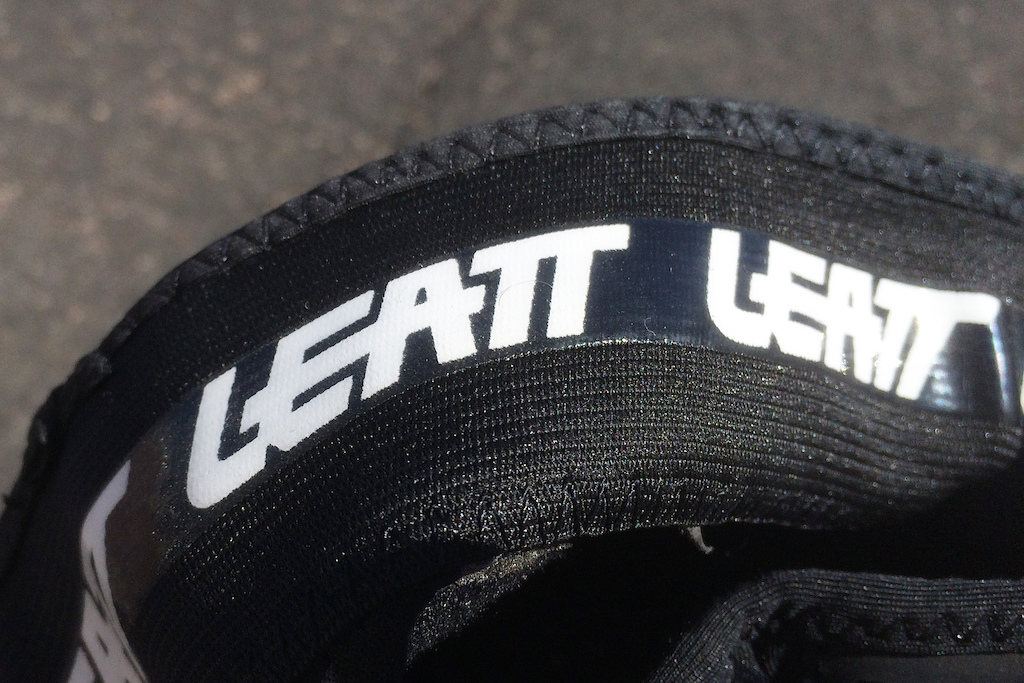 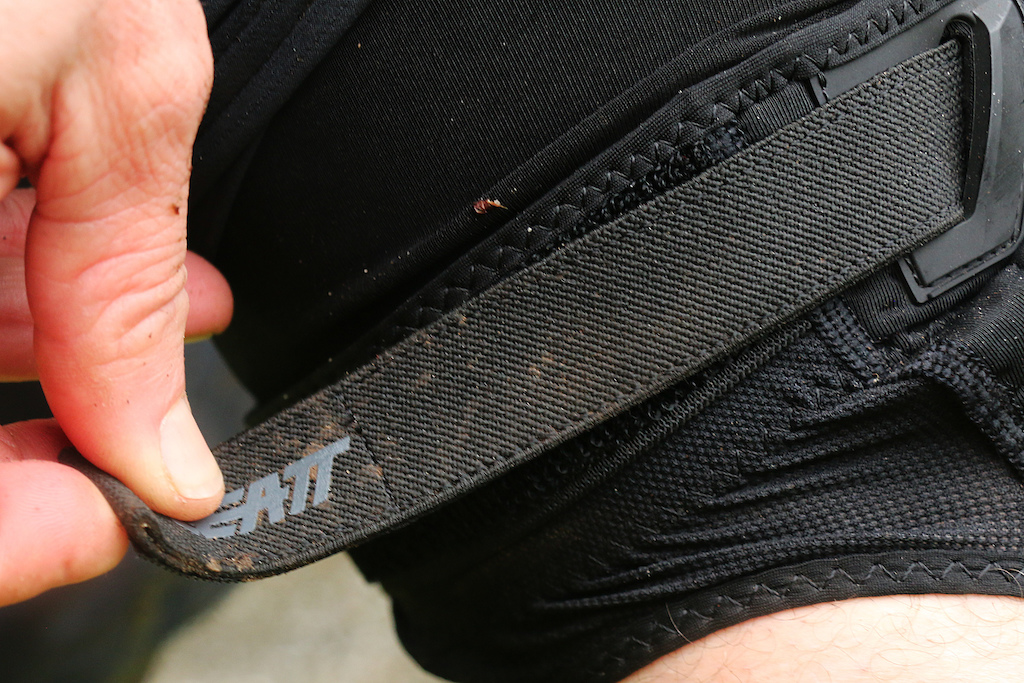 I think a lot of trail-riding pads are actually undergunned—too minimalist for my tastes…not enough padding, too prone to stretching, slipping and sagging over the course of a season…that kind of thing. I understand why that happens—companies are catering to riders who don’t want to ride around in old-school, inflexible storm trooper gear. But if the pads are so underbuilt that they don’t stave off the pain or just wind up slipping and sliding during the ride, you might as well go without any pads at all.

The Leatts are a better option than many of the lighter-weight variants out there. The impact protection for direct hits to the kneecaps, shins and sides of the knee is quite good for general trail riding. I, for instance, had one of those awkward slow-speed crashes yesterday and landed atop a jagged, German Shepherd-sized rock… and didn't feel a thing other than the a solid dose of shame. Without the Leatt’s, there would have been blood and, in all likelihood, stitches.

If, however, I were riding the park and seeking the utmost in impact protection, I’d opt for a set of pads with more extensive padding—the 3DF 6.0s are fine for trail riding in sketchy conditions, but if I was eating crap at much higher speeds, I’d want more cush and would happily accept a bulkier bit of full-on, hardshell protection. These pads, as noted earlier, meet EU moto standards, but I'd want a hair more shin coverage, a bigger slab of plastic over the kneecap and a bit more padding along the sides of the knee for park usage. On a side note, I do like the addition of plastic on the shins and knees, as the pads hangs up less—during that moment of impact—than pads whose business ends are swathed in fabric alone. 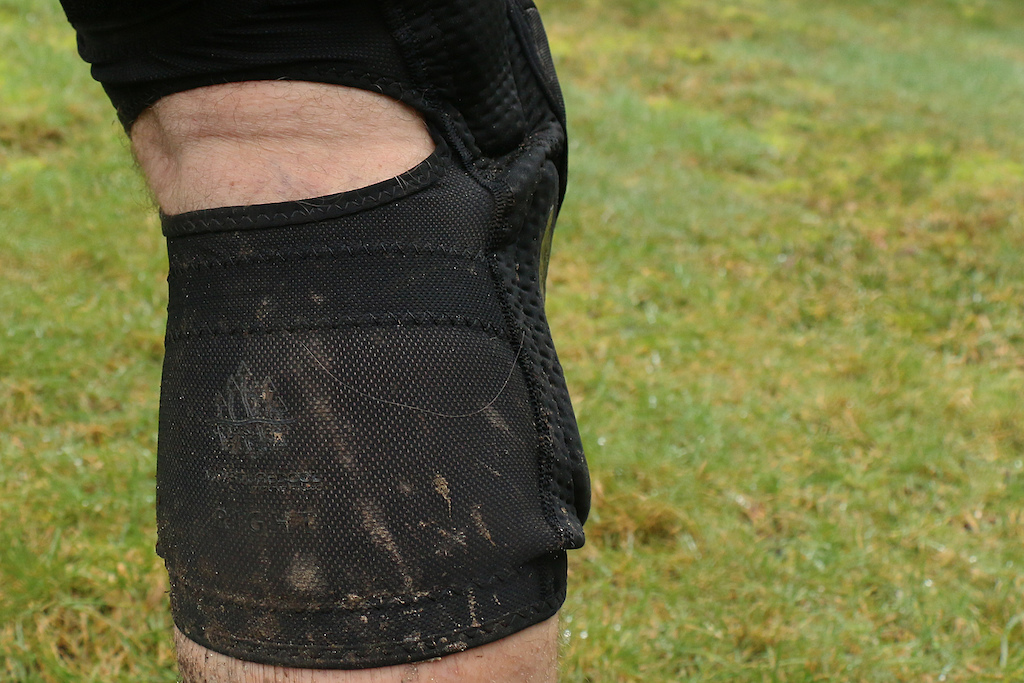 Lots of mesh out back and a cut-out where chafing usually crops up, help keep things comfortable. 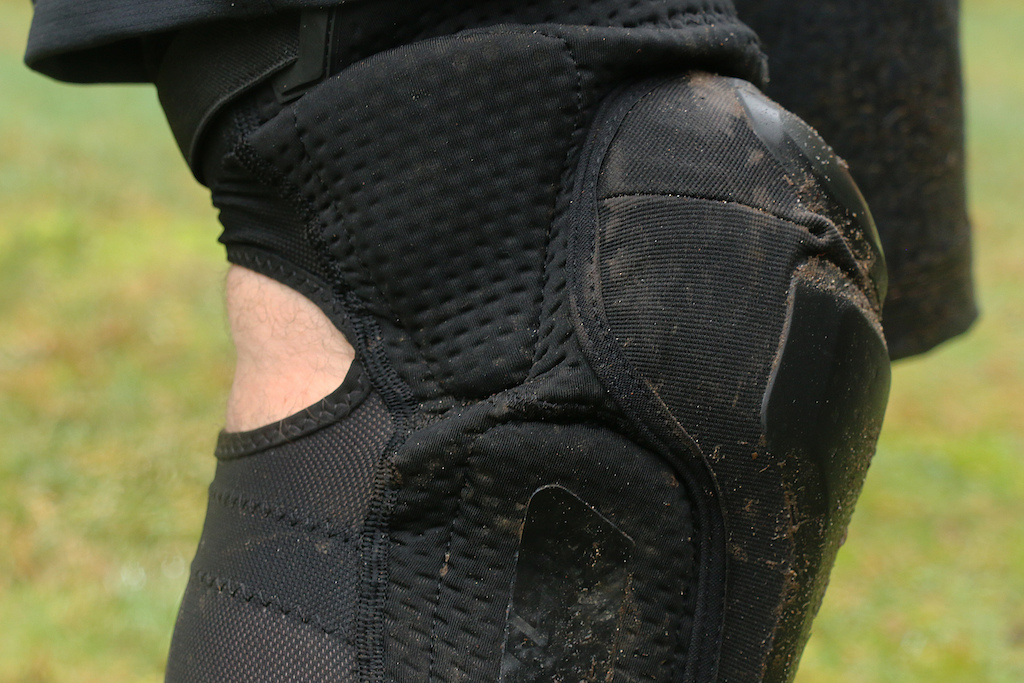 The pads could use a wee bit more side padding, but that's one of my few gripes.

As for comfort—the Leatt’s are quite good. I can ride all day in these things, no problem. I can’t say that the pre-formed shape was an absolute perfect match for my leg—the fit was close to achieving that, but didn’t provide quite the hand-in-glove fit that I’ve experiences with some other pads I’ve used. I did, however, appreciate the Leatt’s streamlined shape on long rides.

As for comfort during hot weather riding—well, I don’t know… The lightweight, mesh fabric on the backs of these pads are part of the reason these pads don't feel overly restrictive when you're turning circles. I can’t say, however, that I ever felt anything resembling active cooling from this (or, to be fair, any other) kneepad's materials. If you live in the desert, these Leatt’s are still going to be hot. Probably not as hot as a bulkier options, but there's still no hiding the fact that they weigh a solid 100 to 200 grams more than the lighter pads out there—you’ll notice them.

The 3DF 6.0s feature both Velcro straps and silicone-printed grippers atop each pad—slipping was never an issue. Sweet. I hate tugging pads up during the middle of a ride. The Leatt’s also feature a generous cut-out on the back of each leg around your…I don’t know what you call it…a kneepit? Well, nomenclature aside, I didn’t experience any of the back-of-the-knee chafing that can make riding all day in knee pads a drag. 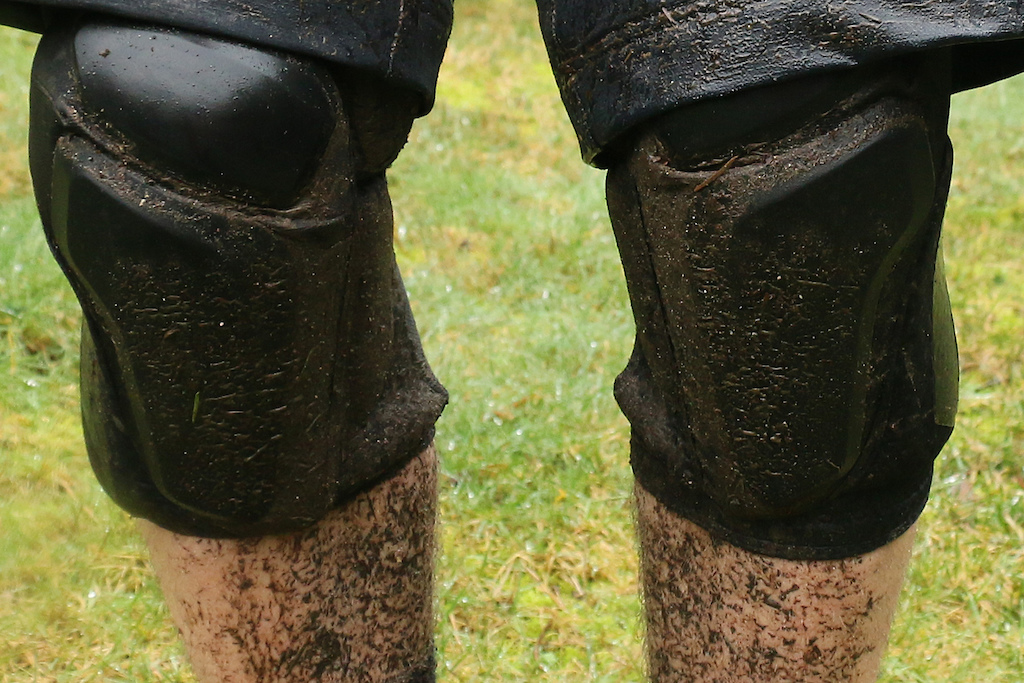 adrennan (Feb 22, 2018 at 8:19)
i got raceface ambush knee pads (i think that is the right model) but they undo so you dont have to take off your shoes to put on pads. greatest design feature of any knee pad

DrPete (Mar 2, 2018 at 9:27)
Was all stoked on the Dakine pads that do the same thing, and then kept struggling with various velcro straps digging into my skin after they wiggled around a bit.

pdxkid (Feb 22, 2018 at 11:02)
I bought these and returned them after trying them on because they were HUGE! They fit basically well in the L/XL but the profile was just too enormous for trail riding. There was also just a lot of airspace and extra material which made them seem so much bigger. I highly doubt the next size down would have fit me at all. Bummer, I really wanted to like and keep them because they seem very high quality.

Brookes (Feb 22, 2018 at 14:14)
I don‘t get the fit of those. Wanted them so much, but why is there so much space around the knees? I‘m usually a Large guy for knee pads and sometime gone XL, but never did I experience a pad where I have the feeling I can sneak a whole fist beneath my knee cap... Comfortable, sure, but what good is a plastic cap if it hovers over my knee and a rock can smash through from the side. Most crashes I experienced where slideouts. Only a few OTBs. Hopefully there will be a V2 with a better fit sometimes. Or a real L without XL.

pigman65 (Feb 22, 2018 at 8:53)
I bought the 3DF5.0s last year and an Air Lite vest, the knee pads are the best i've used, as comfortable as the old Kyle Strait's used to be. The Leatt stuff is so good i bought the elbow pads and a brace as well. However riding in the Alps and around rocks you do feel like you need something harder. I have some IXS Cleavers but they are a bit to bulky for pedaling, these 6.0s could be the answer.

andrew9 (Feb 23, 2018 at 4:24)
I'm surprised these are billed as a lightweight pad, I trust them more than my old Fox Launch Pros, they feel like they have a firmer and more robust layer of protection. I really like the lower profile without the hard cap of the Fox's, makes them sit better under your shorts when standing up, the lower profile also feels less likely to try and rotate in a crash

speed10 (Feb 22, 2018 at 8:40)
I bought some TLD method combo pads on sale and I hate them. I’m keeping an eye out for some better protection. These reviews are cool. More pictures of them on the rider is always appreciated.

g-42 (Feb 22, 2018 at 12:15)
@laxguy: +1 on those. I was about to bitch about then starting to wear out the other day and then realized I've worn them for every ride for almost two years now. They go in the washer and dryer once in a while to restore fit. Good stuff, fairly priced.

laxguy (Feb 23, 2018 at 5:27)
@speed10: They're a little bulkier in the padding than like a fox enduro which fits super easy under jeans.. i don't get particularly stretchy pants, so they can be a little tight in some positions but for the most part they move well with you.

foggeloggliod (Feb 23, 2018 at 17:06)
Every review is good, but i swear the Pinkbike take totally turns me off. every product ever.