Jul 17, 2014 at 12:50
by Vineet Sharma
Tweet
Himachal Downhill Mountain Bike Trophy
First version of "The Most Wicked Mountain Bike Race of India" held in the Mountain Biking Capital of India on 4th and 5th July, 2014. 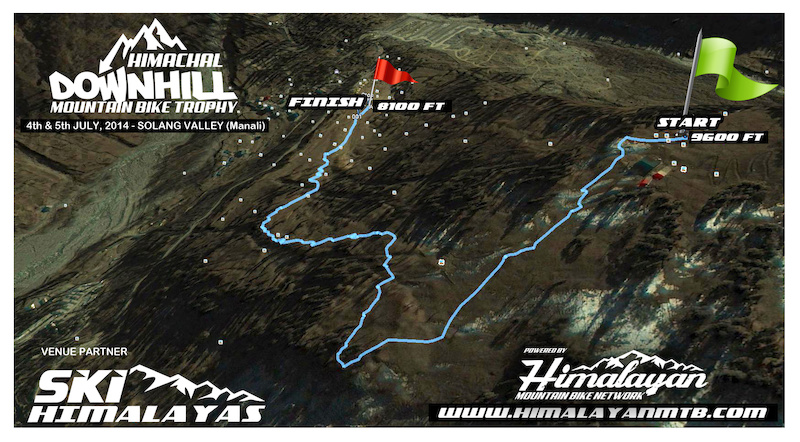 The Himalayan Mountain Bike Festival got postponed for next season which means the first big downhill mountain bike race of India was getting postponed too. It was not because of monsoons… Just the time and funding was not enough for this concept in India. S#!t happens when least expected. The riders were already training and looking forward for this DH race in India, so a quick decision had to be taken and it was decided that Himachal Downhill Mountain Bike Trophy which was part of Himalayan Mountain Bike Festival will take place in first week of July 2014. To make it even better a XC race was also planned too. 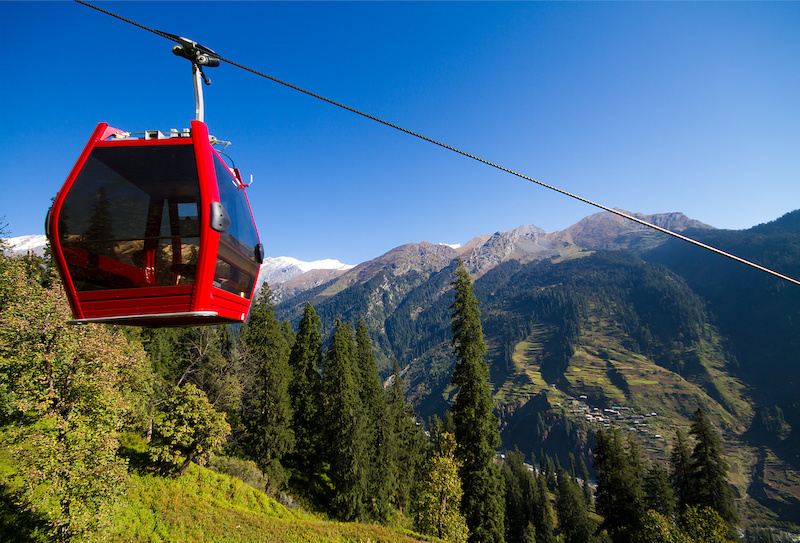 Solang Village in background. It's the last village of Kullu district in Himachal Pradesh.

With mountain biking culture on full swing in India and only XC races being organized so far, we decided to satisfy the needs of handful downhill mountain bikers in this country. The venue was finalized – A Ski resort. Yes… A ski resort in India which was built back in 2010 by Ski Himalayas and is equipped with state of the art ropeway built by Poma of France which features19 cabins with a seating capacity of 8 persons in each. 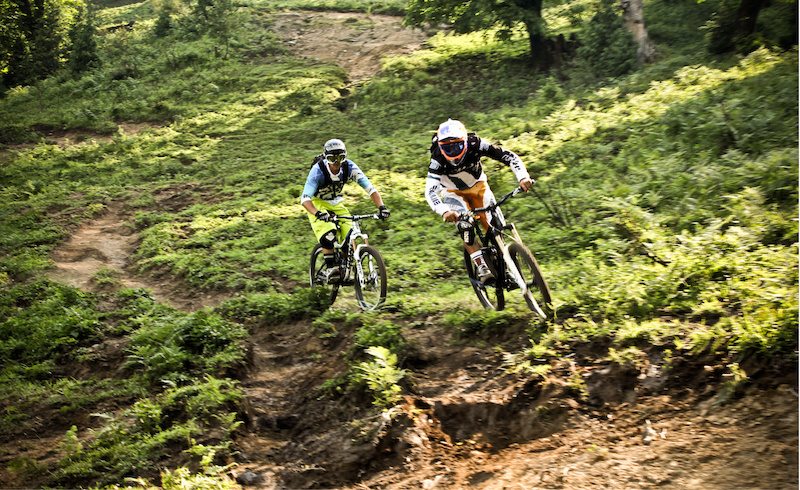 It’s open for everyone; from newly married couples on honeymoon to snowboarders and now us… people with big bikes. Pro riders Andi Wittmann and Guido Tschugg were here last summers to travel in the Himalayas and their ride started from this ski resort. The location is Solang Valley which is 12Km from a small Himalayan town called Manali aka The Mountain Biking Capital of India. Manali is a magnet for all the riders going towards Ladakh which has some of the highest passes in the world. It’s a different trip to ride in this super high Himalayan region. 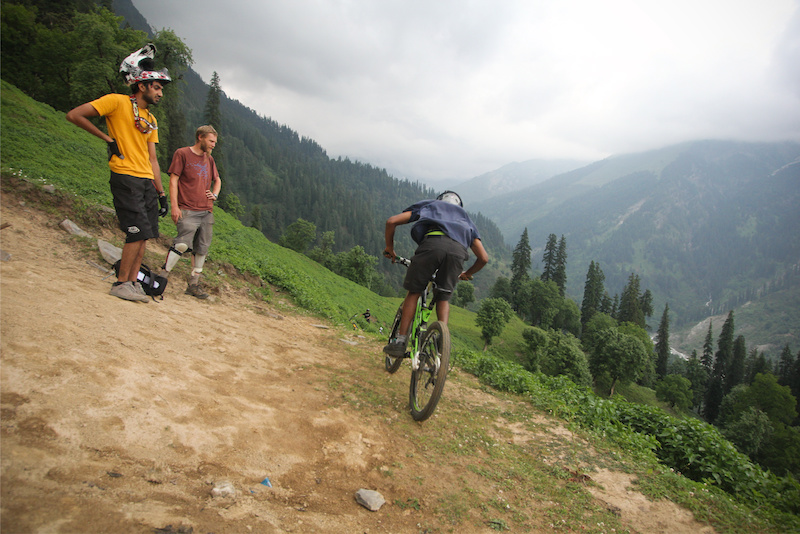 Famous Indian riders; Vinay Menon, Piyush Chavan and Ajay Padval reported a week in advance and so did James Frampton – a British rider who proved to be a big big help to finish the race track and lot of other things required for this race. Finally the track was A-Ok and was tested side by side. As monsoons season was arriving here, the rain God’s poured lots of water on the track, on us and my camera gear which is dead unfortunately. In the end the job got done and all were happy + ready for this event. 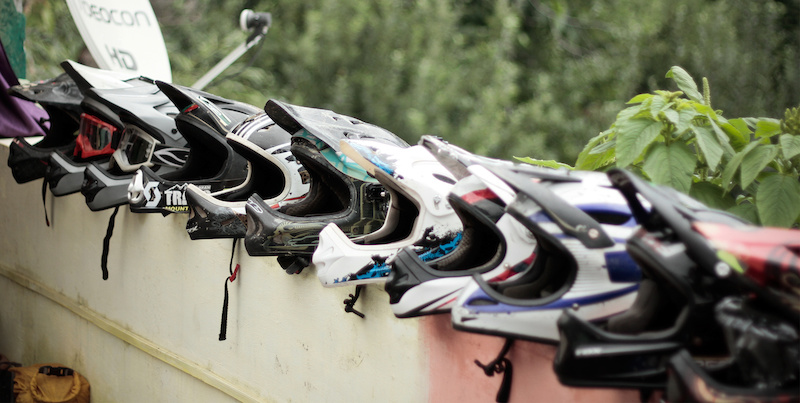 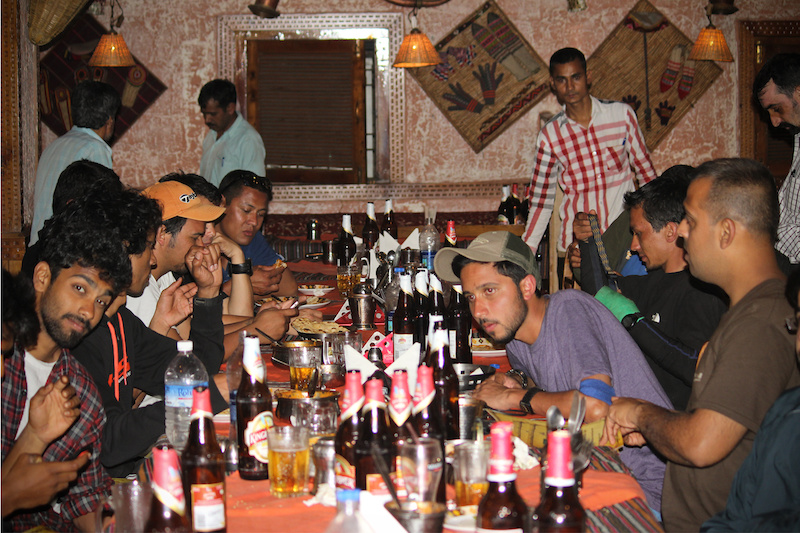 Meanwhile, the dudes from Nepal, Italy and other parts of India started arriving with their bikes and the town looked like a big party place. Bikes and curiosity everywhere. How’s the track? Is it too technical? Is it gonna rain? Can I complete my registration tomorrow? These questions were topped up with more queries from locals and tourists. The most common question – How much does this bike costs? After all queries answered; It was time for some beer. Lots of beer and food to be precise and gear up for the following practice day which turned out to be the best riding time I had in Manali. 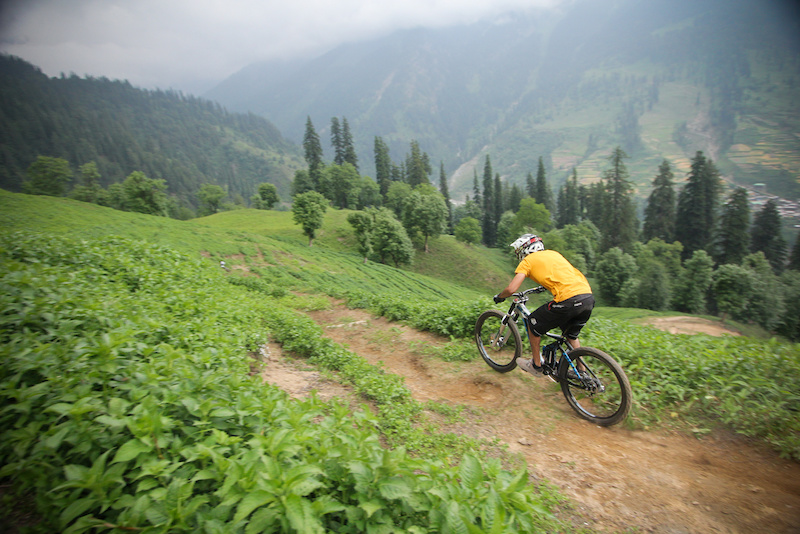 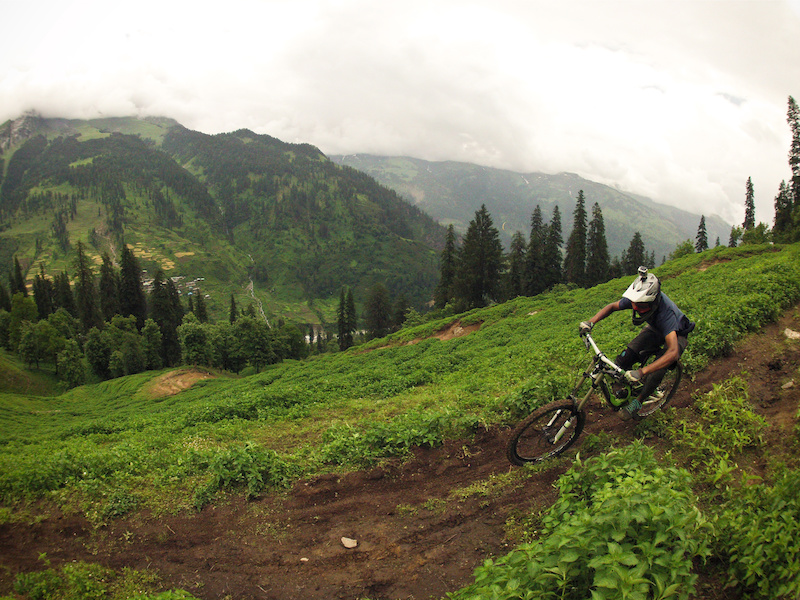 Piyush Chavan getting used to the Himalayan trails.

All the participants were highly impressed with the race venue and compared it to other bike parks around the world. Few of them even nicknamed it as a Mini-Whistler. The rude track was not completely sculpted purposely. Most features were natural which were much appreciated. Maybe you should come and check it out yourself.

Rain just made it better.

After few practice runs and couple of crashes it was time to ride back all the way to Manali town. 18 riders rolling down 12 Km of trail and road was a stunning sight. All the tourists, locals and cows stopped and started wondering what the hell just happened! It’s definitely not a common sight in this country. Not even for us. 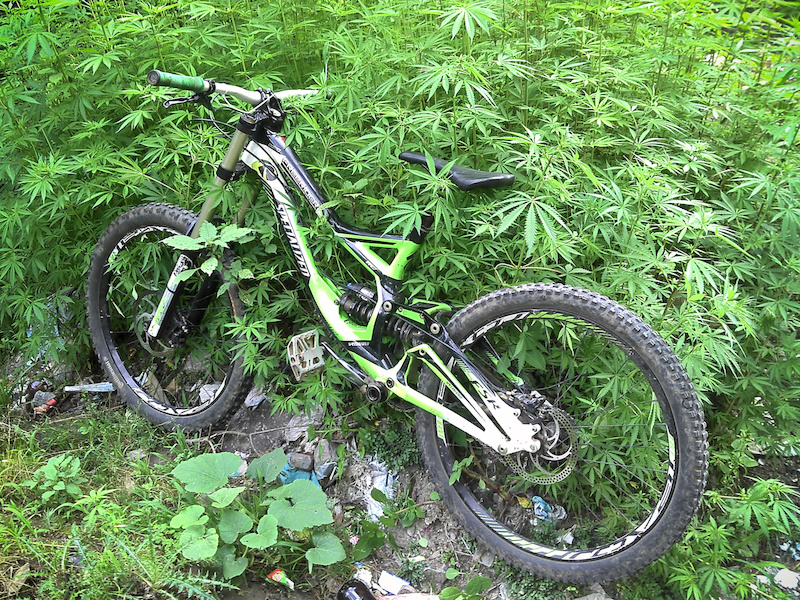 The tourists will not hesitate to enter the start line and pose with you. 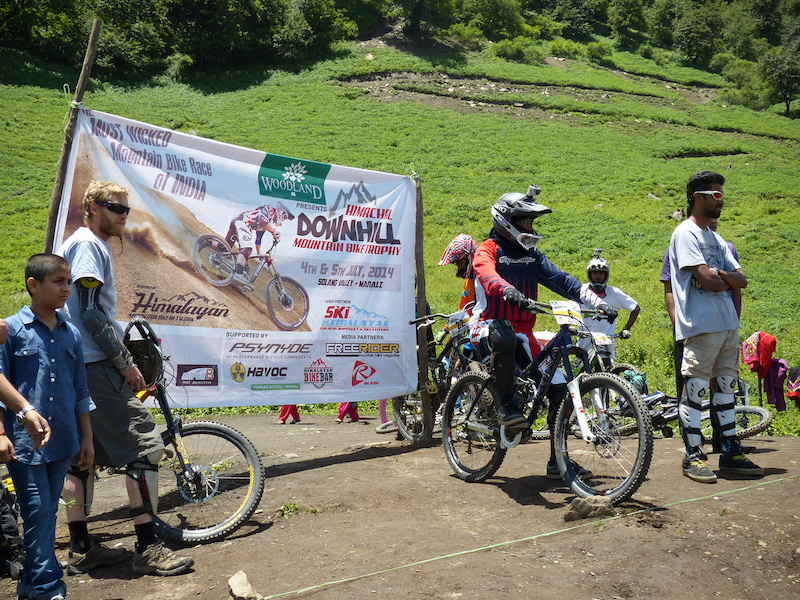 Race Day: Early morning start for the organizing team to install the barricading and tapes and banners and what not. This can’t be done a day in advance. Someone would nick the banners or the cows would destroy the marking tape and barricading. An hour later 16 competitors started reporting for the seeding run which was pretty smooth. Mangal Krishna Lama from Nepal was the fastest in Expert category and Jeewan Jeet Singh from India in Amateur category. 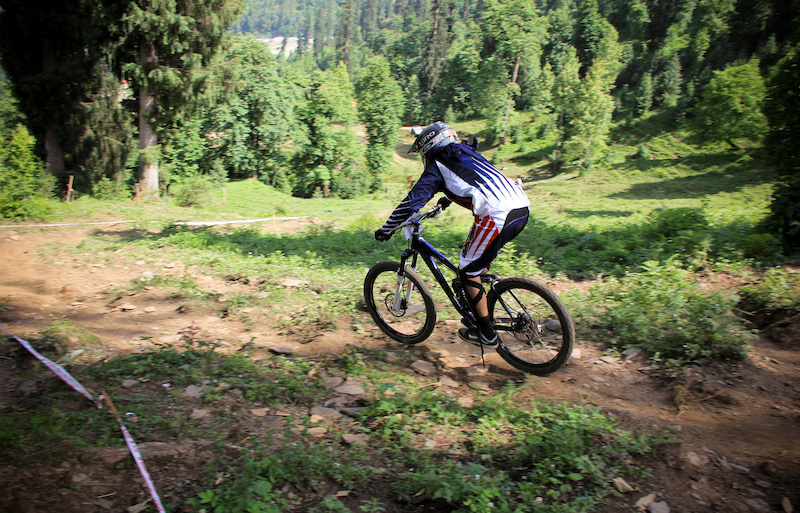 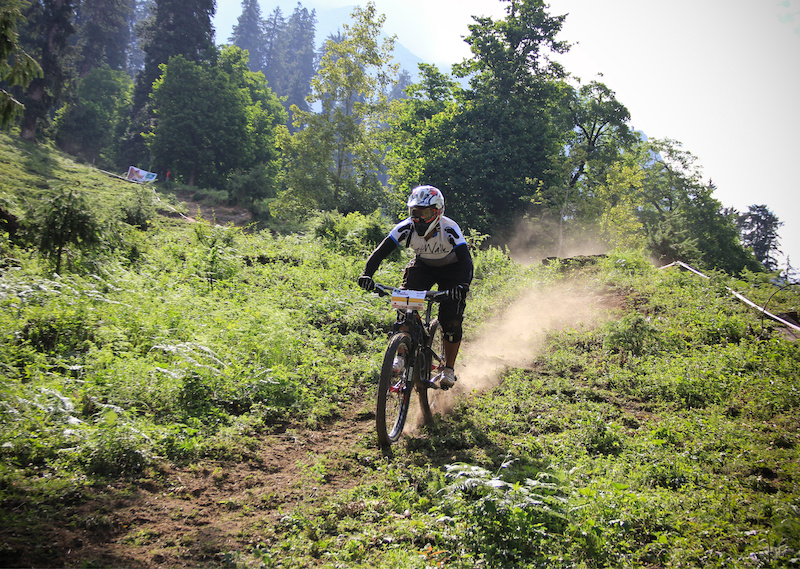 One of the fastest rider from Nepal - Mangal Krishna Lama 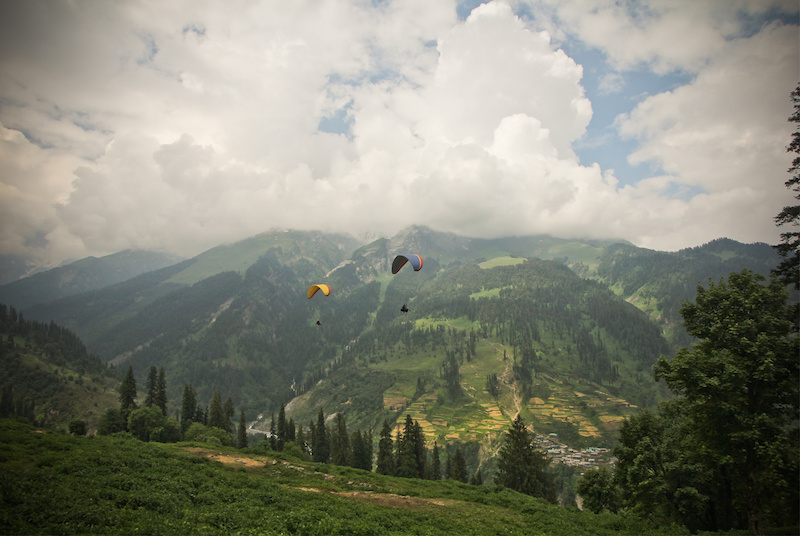 The final run started an hour later from the seeding run. The environment was getting serious and the local crowd was in their positions while the paragliders stopped their work to make the final run successful without any issues. They all knew that the limits are gonna be pushed this time. 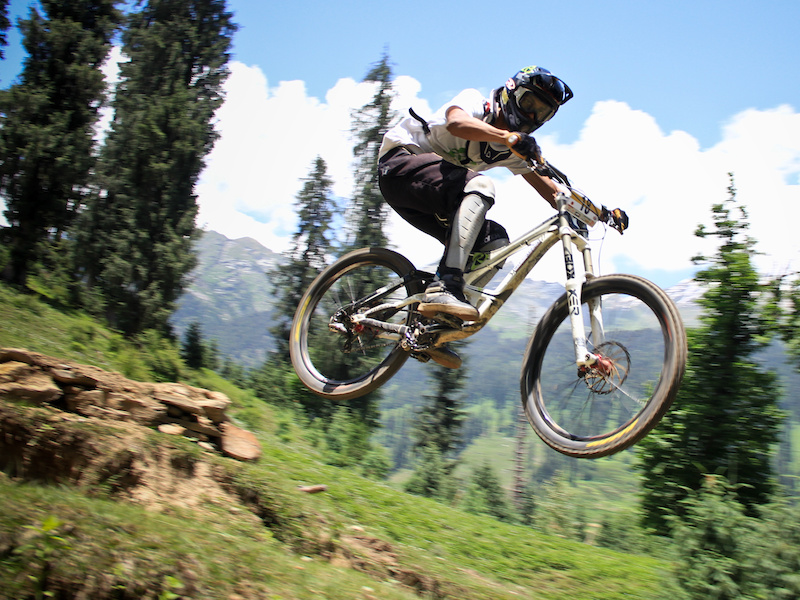 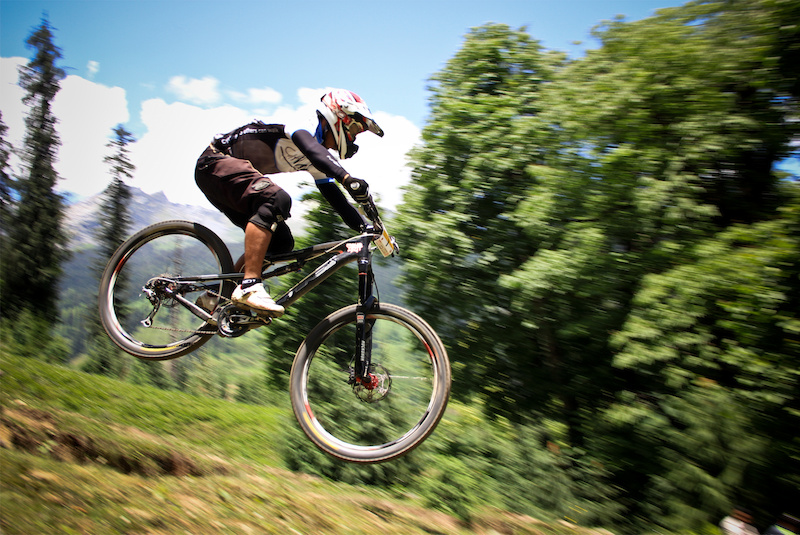 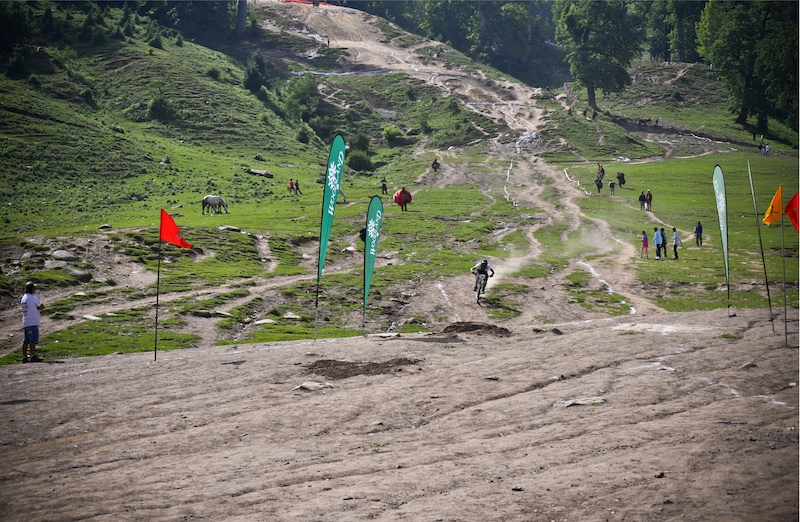 The final run starts with Amateur category. Jeewan Jeet Singh Dhillon who is well known for long distance wheelies and jumps was the fastest by completing the 2Km run in 5 min and 19 sec followed by Akshay Chaudhary who took 6 min and 28 sec. Gurman Reen who came third took 7min and 45 sec.
In expert category Piyush Chavan showed his dark side by completing the run in 4min and 42 seconds making him the fastest downhill mountain biker of India. Mangal Krishna Lama from Nepal was few seconds behind him and took 4min and 49 seconds. Gautam Taode from India came third by clicking 4min and 53 sec. 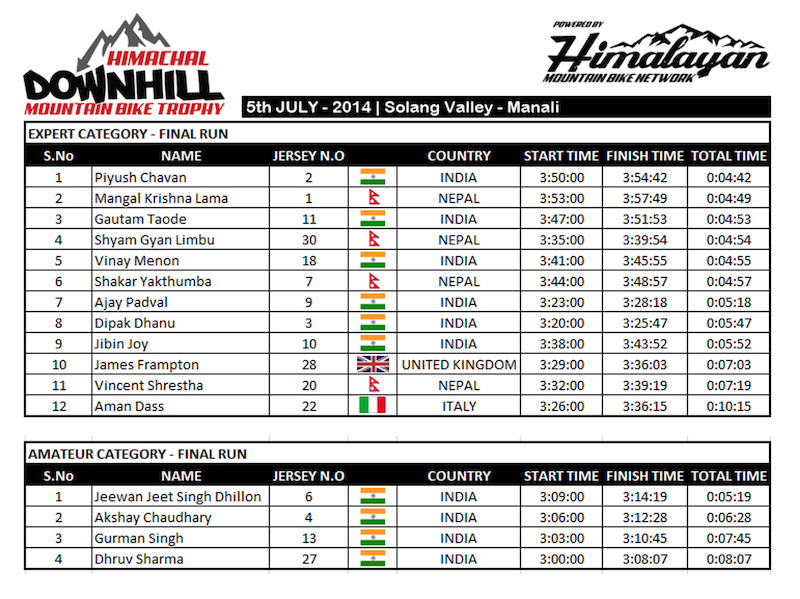 Too Much – Too Young – Too Fast: Piyush Chavan grabbed the Himachal Downhill Mountain Bike Trophy and was super stoked to win the most wicked mountain bike race of India.

The next plan: The next Himachal Downhill Mountain Bike Trophy will be held in June 2015 during Himalayan Mountain Bike Festival (Manali). There will more mountain bike races, bike expo, workshops, live concerts and much more.
I think the way this sport is going on in this country, It’s just like early 90’s when mountain biking was on progression stage in US and Europe. You can witness and be a part of it again. 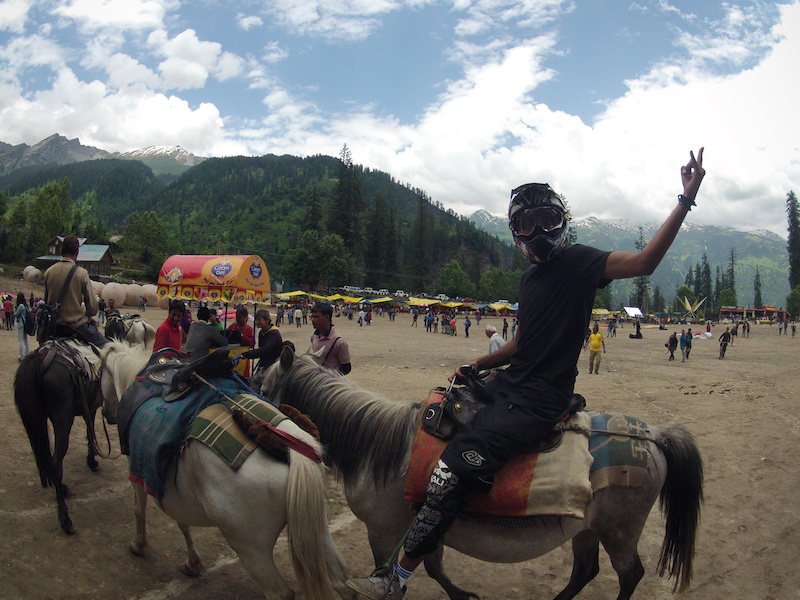 See you in the Indian Himalayas!

freeride-kashmir (Jul 17, 2014 at 14:02)
It was the wildest event at a bonkers location with wild parties and ganja bush thrashings. Next year is going to be sick! I will be on a working bike too I hope...
Post a Comment