There's no doubt that S.P.A.M. took the MTB world by the storm with their XX6 drive train that was nothing short of revolutionary. No one could have been more shaken by its arrival than their arch rival: Sheman-OH. They have been put under enormous pressure to match or even top S.P.A.M.'s invention and have been working hard testing various approaches to the subject and making many prototypes. In the previous installment I showed you a preview of the Corsair Control Stem that steers the upcoming SaintEN group. This time I meant to show you more from the SaintEN, particularly the new drive train, but I was contacted by the Sheman-Oh representative and he said that if I kept quiet until the end of March, they would invite me over to Japan to show me another big thing they are currently working on. I was very suspicious but I agreed, I went to their R&D facility south of the city of Fukuoka. It appeared that they had secretly invited dozens of other internet bikers from all over the world to show them the goods. Among many I can mention such personalities as Spaced from Poland, Taletotell from US, Dingus from Scotland, and Canada was represented by Protour. We were presented with the prototypes of the component group called XTROLL. 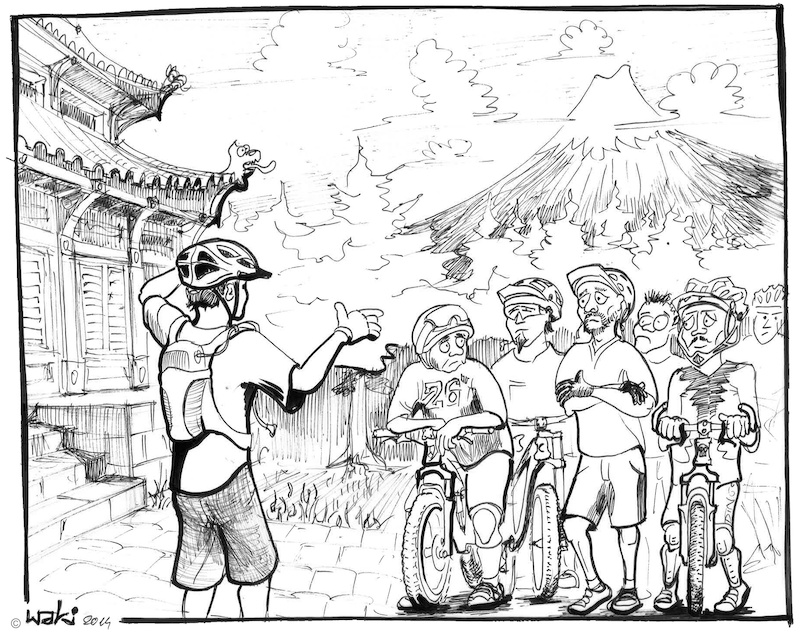 Harry Burton, the managing director of marketing of Pacific division of Sheman-Oh, briefs us before departing to the woods.

The end of the drive train hype?

In contrast to the orgy of electronics that SaintEN seems to be, in the near future we might get the XTROLL - this is a concept in which Sheman-Oh decided that maybe instead of pushing through a totally new product sparkling with new standards and yet another number of speeds, they could win their clients hearts by giving them something they really want. It is a single ring drive train giving you a chance to run anything from 7 to 10 speeds in one package! A group of market researchers went through internet forums and found out that plenty of people want 6 or 8 speed drivetrains. A part of Sheman-Oh R&D department set out to meet those demands and created XTROLL, which stands for eXTRa Off-Limit Liaison – that slogan is meant to express the brand's best intentions to cooperate with their customers. Now by inviting us, the opinionated geeks, they got a chance to test the prototypes. 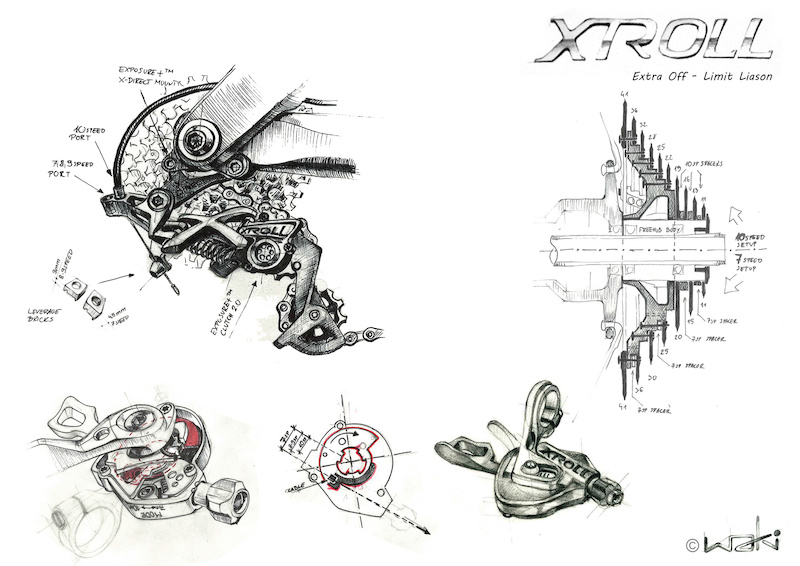 How does it work?

The first component is the shifter which comes packaged with 3 different, exchangeable discs that pull the cable via mechanism - the bigger the radius the more pull we get per shift. Then the adjuster at the bottom limits the number of clicks from 7 to 10. Sheman-Oh says that even though they are very proud of the shifter and will encourage everyone to buy it, all the parts of the group will work with any of the shifters from the previous years, so you can use your current dear piece of the cockpit. On the other end of the cable sits the derailleur which is based on the current ExTiARGH!. It comes only as short cage and with the Shadow Minus Clutch 2.0, which can be removed and replaced with a standard spring if the Luddite is strong in you. The most important new features on the derailleur are two cable guide ports and spacers to put under the cable. You've probably seen people modding their 10 speed clutch rear mechs to work with 8 or 9 speed drive trains. This is the answer to that - you guide the cable according to how many speeds you want to run. Now the cassette. It comes with a carbon spider and 18 sprockets in various sizes, six of which can be bolted to it according to your preferences, unlike in standard cassettes where they are pinned. The smallest cogs are placed separately with spacers. The gearing span is 11t to 41t. By using spacers on the spider you can setup the cassette to work with 7,8,9, and 10 speeds, having various cog combinations. The last part is the carbon crankset, they no longer make aluminium crank arms that are more expensive that most of carbon ones. It is no surprise that it comes with a spiderless narrow-wide chainring, available in sizes from 30t to 38t. Off course you need the corresponding chain, although none of them come with the package. In 10 speed mode The XTROLL is 190g heavier than ExTiARGH! and only 80g heavier in 7 speed. 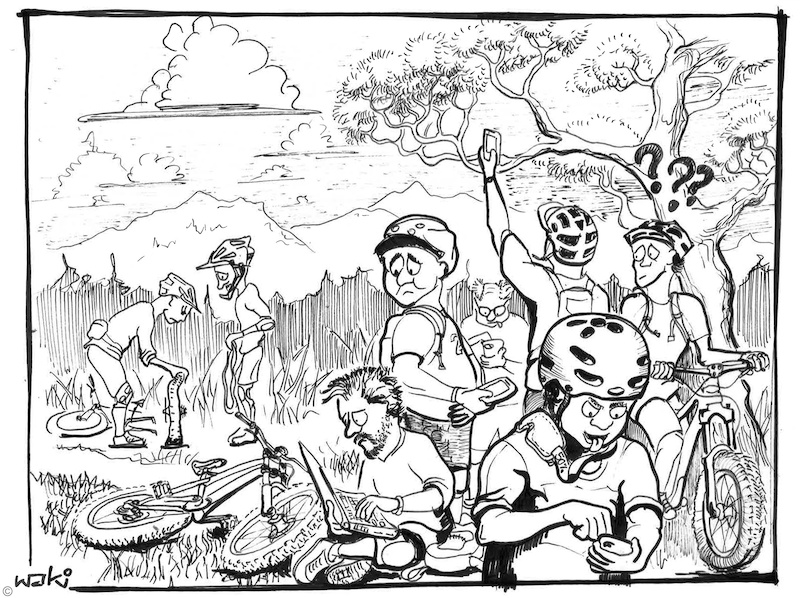 While riding on the ridge one of the riders got a flat. Before Harry and Niko managed to help him to take the wheel of the bike, they realized that everyone had their smart phones out, and were commenting on various forums - one guy even had a notebook in his backpack.

We were asked to bring our own bicycles so that we could see by ourselves how well the prototypes work. Sheman-Oh mechanics installed the components on our bikes according to the demanded number of speeds. Two people wanted the clutch to be dismounted as they did not trust it and only one insisted on getting a two ring chainset, despite a 41t cog in the back and 30t chain ring. We set out to ride in the wonderful mountains around Fukuoka guided by a very special local: a positive vibe volcano, a true POV hero, one and only Niko-niko! Assisting us in case of any questions or problems was the managing director of marketing for the Pacific division of Sheman-Oh: Harry Burton. Trails were mixed and technical, XTROLL was shifting very well on the uphill even under the power, and even after few mud baths shifts were crisp and precise. On the downhills the clutch was keeping the chain on without any chain guide, and everyone, even sworn SPAM lovers appreciated the speed at which you could downshift. Most of us rode on 9-speed but we were extremely keen on trying each others bikes. I must admit that I liked the 10-speed most as it was shifting smoothest, but the 7 speed wide range option wasn't as bad as the hype was telling us when justifying the necessity of 11 speeds for smooth ratios. In fact when riding on parts of trail with frequent ups and downs, where I was extremely focused on riding the bicycle, I did not notice any problems. Not being able to find a nice intermediate shifting ratio was felt only on asphalt and fireroad... definitely not when pedalling for life. Food for thought maybe? When asked about the chain life, Harry said that all XTROLL series chains are nearly equally strong. Of course, not all of us believed him. Everything is in the prototype stage so it was hard to talk of pricing, a very important factor for us +3k$ moaners, but Burton assured us that if XTRoll goes to production, it will trickle down very fast and will be available as Diarrhoe as well. Nevertheless, after the whole day riding and switching gears, we all could agree that the products were amazing and gave Sheman-Oh a standing ovation at the farewell dinner. 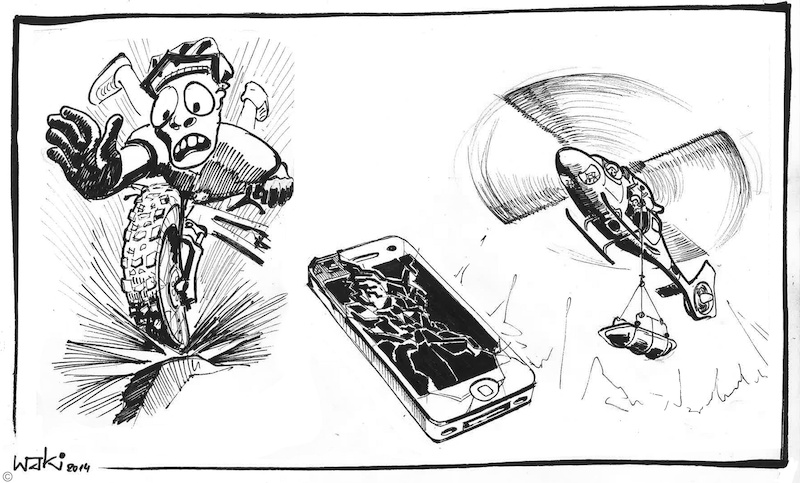 Not all things were going super smooth. On a very rocky part of the trail one of us went over the bars and destroyed his iPhone that he was keeping in the side pocket of his shorts. One hour later he could no longer bear the hunger of not commenting under Pinkbike Product Picks. He succumbed to severe depression and needed to be airlifted to the closest Apple store for reparation.

I am very thankful to Sheman-Oh for giving me the opportunity to try the prototypes, I am happy I could share my insights with you. It is super exciting to see such thing being developed and I do hope that XTROLL will be put into production as soon as possible!

There will be more leaks to come in the future so stay tuned!


Disclaimer: This article is meant to be a satire. My intention with it is to entertain you and eventually provide some food for reflection in case we treat our sport a bit too seriously. I honestly do not wish to insult or harm anyone or any company. Any resemblance to persons, names and places might be coincidental.

WAKIdesigns (Feb 26, 2014 at 4:14)
Thanks for all the comments. I know my writing may appear gibberish, and perhaps the pictures speak for themselves but I stand for it because it makes me who I am. I will try to make more story boards if time allows. CHEERS!

krazieghost (Feb 26, 2014 at 6:50)
ya nice work man. thanks for contributing original user content to the site

nikoniko (Feb 26, 2014 at 20:00)
WoooHooo! Im glad the trip was a smooth journey! I took lots of footage so expect a rad video within the next decade. All the photos were top secret and are left with Waki's beautiful art work. I just wish I got to keep the X-Roll set up on my bike! Looks like Im back to the normal old 8speed! RideOn and thank you for the great article Waki!

orientdave (Feb 26, 2014 at 1:57)
Oh, and Niko looks just like that!
And this comment needs to be highlighted so not to be missed by the masses.

"In fact when riding on parts of trail with frequent ups and downs, where I was extremely focused on riding the bicycle, I did not notice any problems"

ThePriory1978 (Feb 26, 2014 at 5:26)
As much as this is delightful japery, the imaginary rides mechanical enabling forumites to blog etc is a painfully true observation. A perfect opportunity for socialising, enjoying the scenery and weather, and what happens, people stare at screens to spout bobbins at people they don't know. Like this comment for example. Sad but true.

"all the parts of the group will work with any of the shifters from the previous years, so you can use your current dear piece of the cockpit."

cuban-b (Feb 26, 2014 at 10:13)
there needs to be a video made featuring Waki and Protour debating all the new tech in mtb. i volunteer to moderate.

WAKIdesigns (Feb 27, 2014 at 13:04)
Yea that would be awesome, Red Bull sponsored hahahaha. I know what, just send us to Interbike or Sea Otter and give us boxing gloves along with a microphone. We'll be hitting marketing right in the face!!!

gavind (Feb 26, 2014 at 14:13)
Loving these, Waki. It reminds me of the stories D.C. Greening used to write for Tracks surf magazine down here in Australia in the mid-80s (yep, I am an old bastard). A sport that takes itself so seriously sometimes (including I the comments sections here where sheep stations are own and lost) needs someone pulling the piss every now and then

groghunter (Feb 26, 2014 at 6:43)
The sad part is, if the leaked 11-speed XTarrrrgh pics are to be believed, even Waki thought Sherman-o would provide a wider range than they actually did.

freeride-forever (Feb 26, 2014 at 13:55)
Internal gearboxes are the only right answer! $CRAP & $hitmano only give a shit about sustained revenue, not about making the sport better or giving people what they want. Support companies like Pinion instead.

Oh & for the guy that broke his iPhone, that was a perfect opportunity to get a much better one like a Samsung Galaxy or HTC One for the same price or less.

djpearce (Feb 26, 2014 at 1:38)
ExTiARGH is making me giggle. This is great Waki, thanks for the morning entertainment!

somemorestuff (Feb 26, 2014 at 6:50)
I miss the mountains around Fukuoka, some good trails and some great times!

Imagine if SRAM or Shimano gave riders what they asked for????