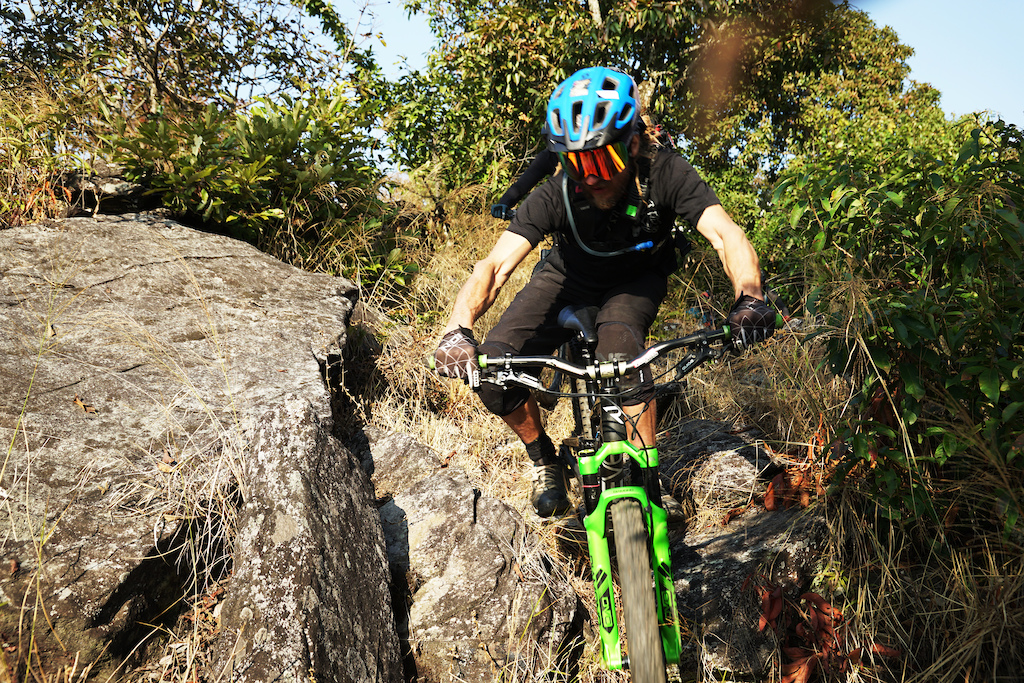 A prospecting journey to the foothills of the Himalayas yields exciting new trails.

Our group of mountain bikers arrived during a steady monsoon shower.

When we were tasked by Sunil Sharma, director of the upcoming Pokhara Enduro, to conduct an exploratory trip of the hills immediately outside the city of Pokhara, Nepal, we were initially unsure. The tourist mecca – an essential stopover and staging point for mountaineers and adventure-minded backpackers – had mountain biking on its comprehensive list of outdoor activities. But otherwise, it was not the critical highlight - Pokhara’s steep geography and its interaction with prevailing climatic conditions make it a haven for paragliders; its extensive network of footpaths offer passage to trekkers of all abilities; its rustic lakeside views are punctuated by affordable yet quaint bars, eateries, and accommodations chasing the tourist dollars. 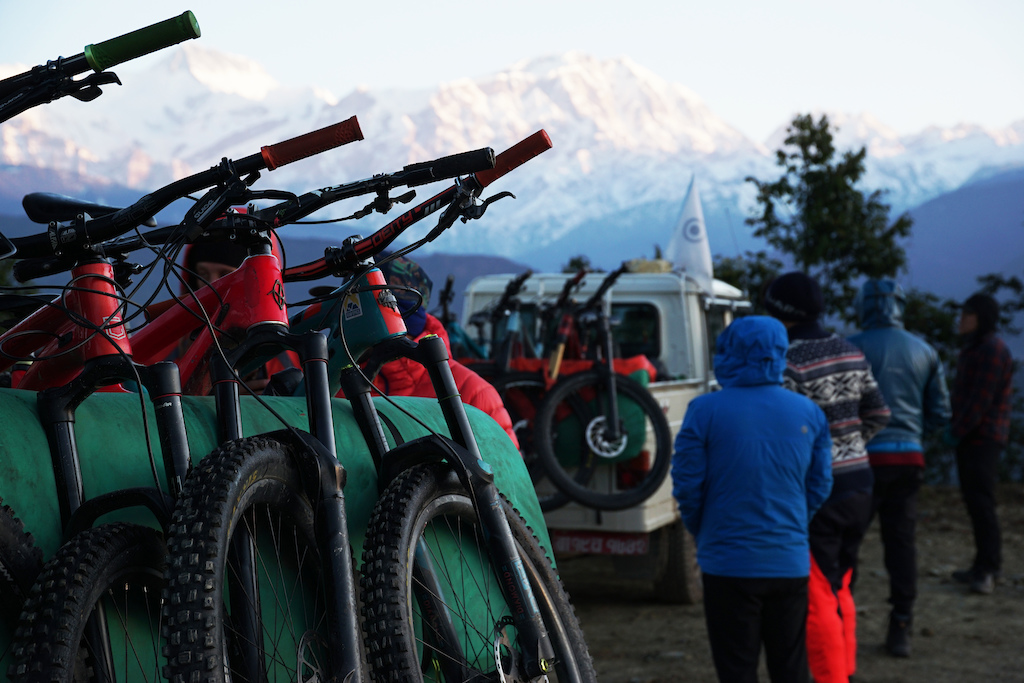 But as the weather cleared and we pushed deeper into the hills, we struck gold – ‘gold’ on our terms as mountain bikers, anyway.

The village of Arba, nestled on the slopes of a hill just over 1300 metres high, remains a rural getaway a mere 20-minute drive from the main drag of Pokhara city. Its main access roads are smooth and tarmacked but quickly turn to rutted, rough 4WD tracks as they wind higher towards the hill-top shrine and the panoramic views at its summit. 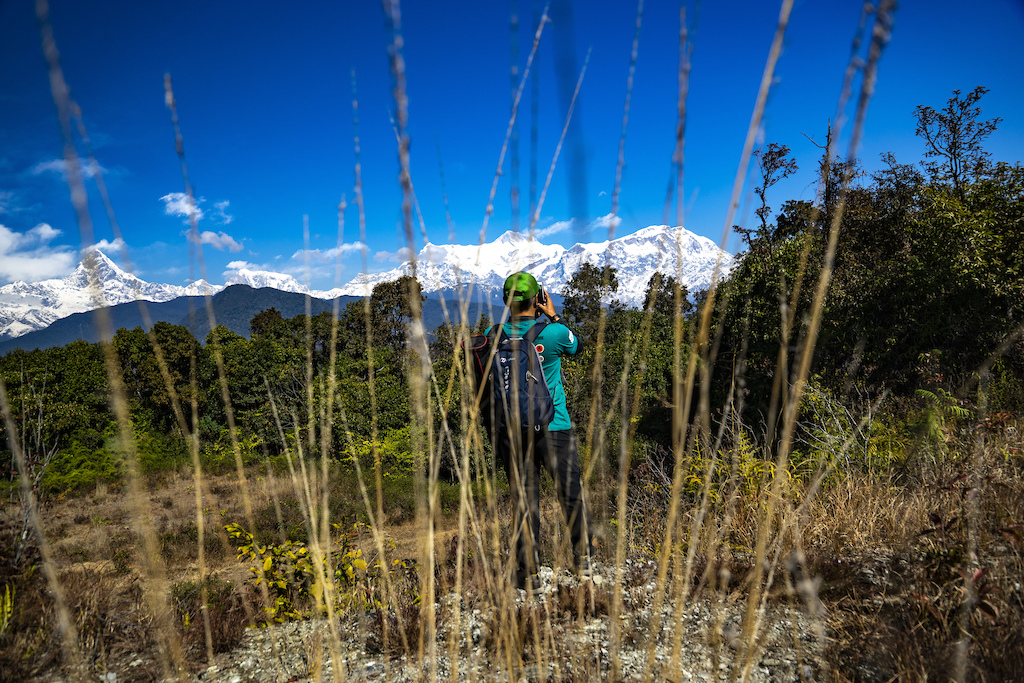 What we found, pure singletracks that are starting from this very summit and spreading out in a multitude of directions. In some cases, these trails were overgrown and encumbered by vines and secondary jungle – from years of disuse from an earlier era where they were frequented by a then-larger village populace. In other cases, the old trails snaked through former agricultural plots – decades-old terraces reclaimed by swathes of long grass – through which one could still catch glimpses of majestic Himalayan alpine peaks in the distance.

The crew that Sunil had assembled were not just here to shred. We had come armed with our trail/enduro bikes, but for good stretches of each of the 5 days we were there, we picked up machetes, saws, hatchets, rakes, and shovels instead and got down to work as trail builders. 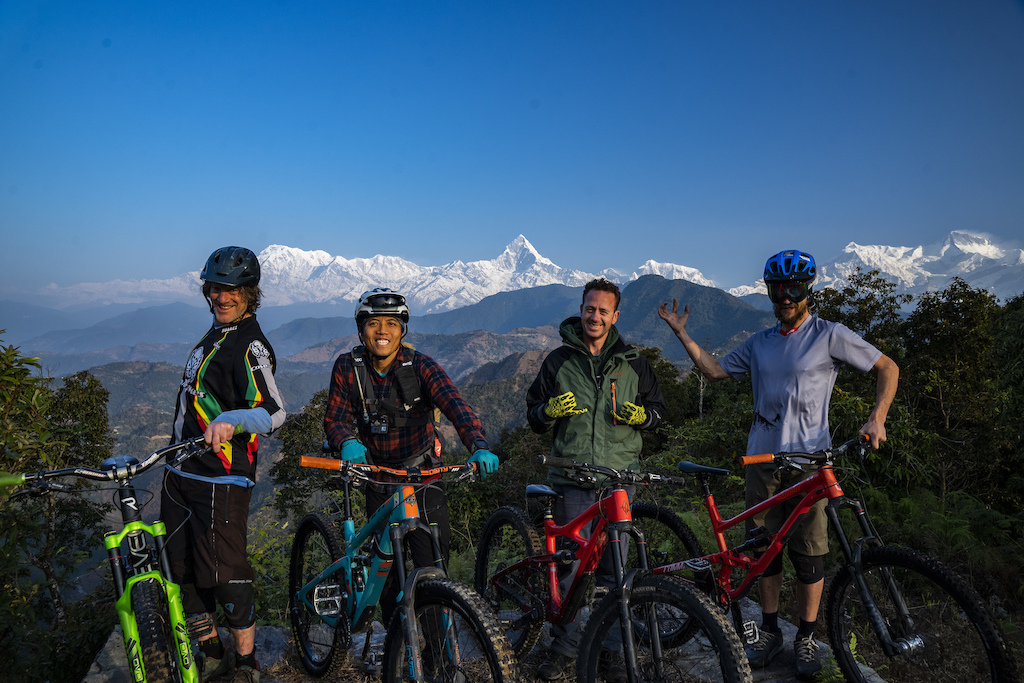 A keen eye for the flow and lay of the land was invaluable as we trimmed vegetation and dug soil to carve out descents worthy of a technical, raw enduro event. Many a time, a route that held promise seemed to be hindered by vegetation here, a surly boulder there, or just held ruts too deep or also turned sharply to be ridden by even the most skilled of mountain bikers. But with the tools available and the will to claim ‘first descents’ robust amongst the entire team, we made short work of what we discovered.

The rewards? Fantastic traverses that visited villages and dropped through them, in many cases making full use of the elevation and producing vast amounts of flow and speed; in other cases, dropping us along ridgelines and loamy, forested slopes with some of the most ‘Euro-style’ switchbacks and steeps any of us had ever ridden. A few rock slabs were gainfully re-purposed with creative realignments of the mainline using smaller rocks. A few of these trails even took us down hand-built rock staircases – that have existed for generations of villagers and farmers settling and working this hill – primarily, ledge-ridden rock gardens that were an absolute hoot to ride down. 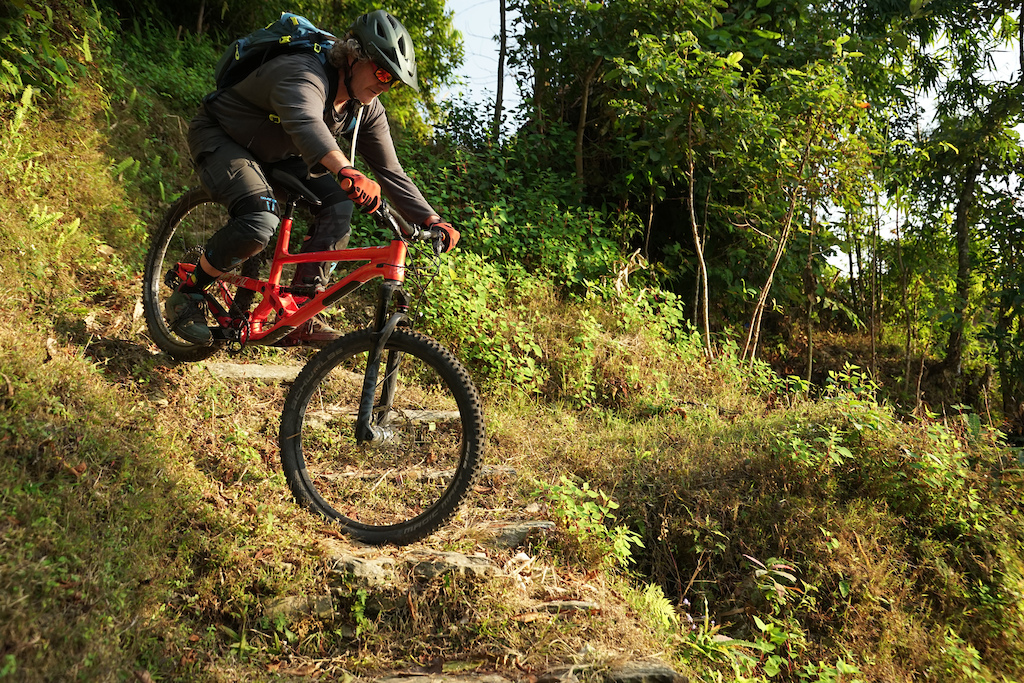 The hard work of scouting and opening up these trails was tempered by the fact that we all enjoyed shuttle uplifts each time to regain the summit. Once we put the tools down, we transitioned fully into riding mode and test-rode our handiwork. A balance of trail work and trail testing formed the basis of each day, and apart from that first rainy morning, each subsequent dawn greeted us with mild weather and progressively clearer skies.

The adventure element was not lost on us either. Pedalling around the base of the hill after each grin-inducing descent to reach our shuttle vehicles, we found jaw-dropping scenery in the form of wide gravel riverbeds, through which shallow yet swift-flowing rivers bubbled and braided, bordered by rice fields and pastures. The route continued crisscrossing this rustic landscape, fording the rivers numerous times as it dropped, then climbing back high to offer commanding views of the valley. We could well have been riding in the deep backcountry of New Zealand or British Columbia, if not for the appearance of water buffalo herds and occasional shrines adorned with Buddhist prayer flags. 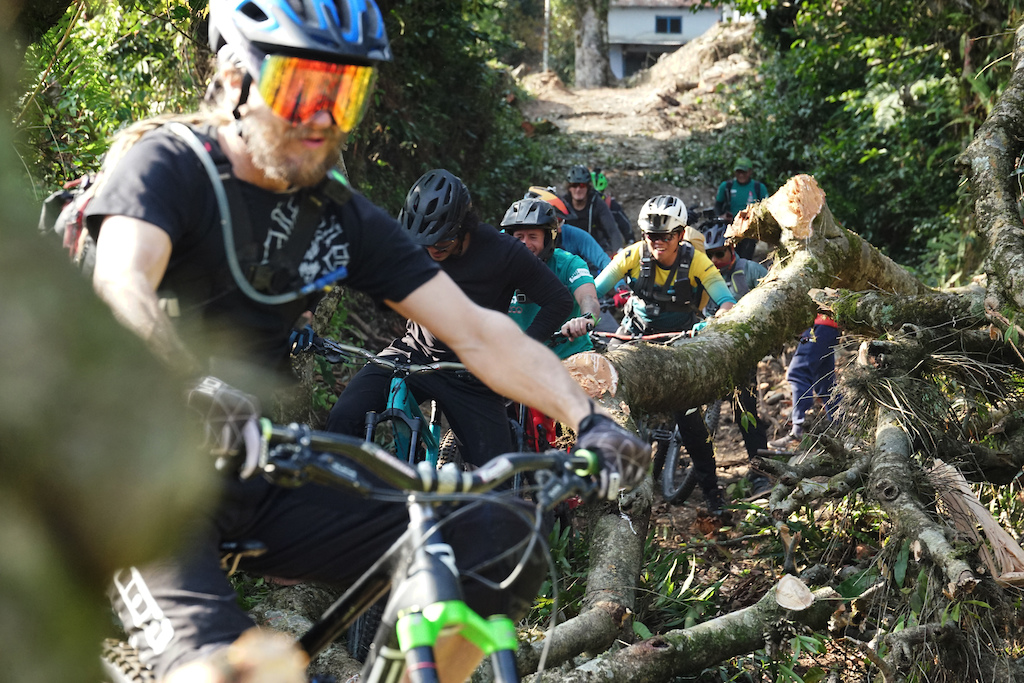 We encountered many hospitable locals who assisted us during this mission. From offering us tea and boiled eggs mid-ride from the very doorstep of their humble dwellings; to harnessing ‘local knowledge’ and leading us on-foot to the best trails; to dispensing generous servings of rice, curry, and lentil soup we inevitably had for lunch each afternoon; to meeting up with Sunil and arranging for access to a good number of private landowners’ plots for our work (and enjoyment)… we encountered a warm smile and welcoming disposition from every Nepalese person we met on that hill.

When, at the end of each day, we hit the dinner queue back at our hotel and later caught up over drinks, we collated great memories of the magnificent trail network that is Arba. It is exceedingly rare in the modern mountain bike world to claim first descents on-trails you helped build in a foreign country. We would like to think we helped open up these trails for the benefit of the local villagers and their economy in a small but meaningful way – with their blessings and approvals. 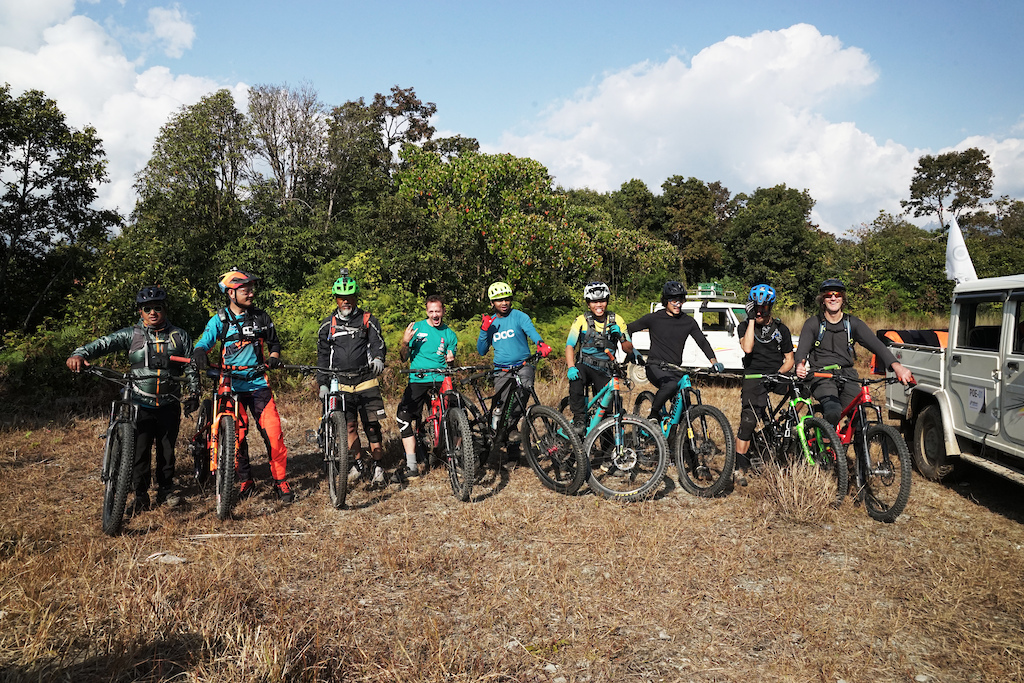 With the trails now in place, mountain biking stands to gain new prominence amongst the slew of activities that Pokhara affords as the adventure capital of Nepal. And with the upcoming Pokhara Enduro race taking place on these very trails on Easter weekend this year(2020), we can’t wait to hear what the race participants think once they have had their turn riding down these brand-new (or reinvigorated) trails! 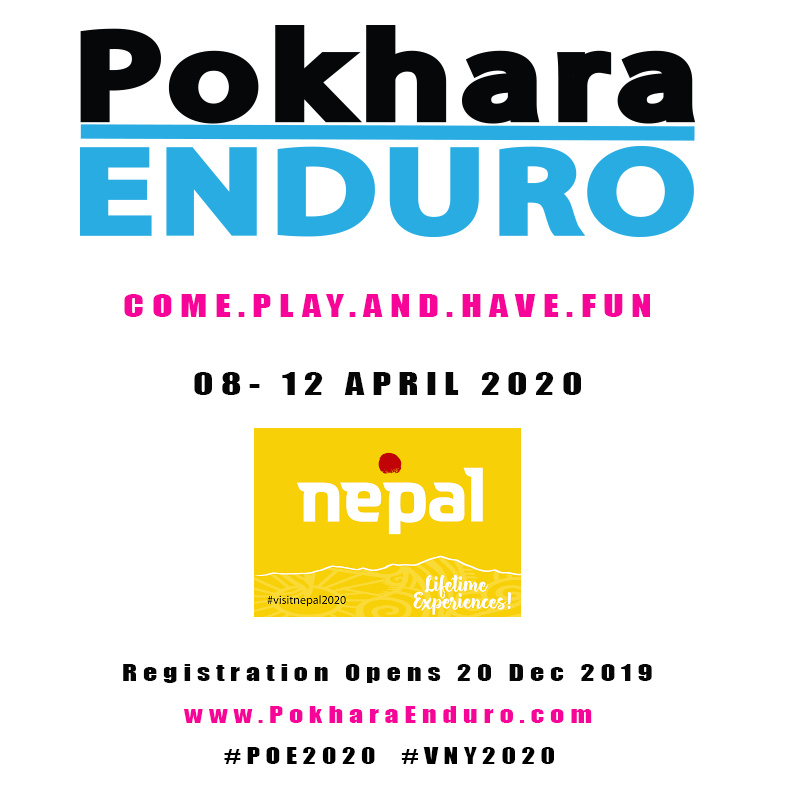 The Pokhara Enduro takes place from 8-12 April 2020, with registrations currently open and capped at 100 riders. Please visit www.pokharaenduro.com for full details and to register.