Interview: A Beer with Justin Novella

Join Pinkbike  Login
Over the last 12 years, Justin Novella’s been steadily working his way up from grom to guy-to-watch-out-for at contests in his hometown of Cape Town, South Africa. I caught up with him over a beer to chat about the launch of his new edit, the local riding scene, and his recent signing to Dial’d Bikes.

How and when did you start riding?

I started riding when I was pretty young. Myself and a few friends used to cruise around my old neighbourhood building sketchy ramps and having skidding competitions where we would take about a 100m run up and see how far we could skid. It mostly ended with a worn tyre or exploding tube. Needless to say my dad did not approve of this game having to buy new tyres every couple weeks.

You’ve had some great success at local contests and jams. Any highlights that spring to mind?

Last year’s Night Harvest was definitely the best contest i've ridden at. The crowds, the vibe, and all the riders just made it awesome. I came second in the mountain bike category being beaten by Nic ‘The German’ Reichwein who rode like a true champ that night. We both pushed each other and progressed so much during training and on the night doing tricks down the main line that we had never attempted before, both trying to get that top spot.

You mention The Night Harvest which you’re involved in (in association with Monster Energy). Tell us more about it.

The Night Harvest is a BMX and MTB dirt comp that is held at Potato Trails in Hout Bay, Cape Town. What makes it different and more exciting is that it’s held at night under flood lights erected for one night only. Local rider Ryan Franklin and I have been in charge of the organisation of the event which has been running for two years now. We work closely with the Potato Trails crew with the course design and building which gets better every year. Jonty (who owns the land), Nic, and Oscar put in a lot of time and effort helping us get the trails ready for the event. Follow ‘nightharvest’ on Instagram to see pictures from this year’s event!

In it’s second year (2013), The Night Harvest attracted international BMX and MTB riders to our shores to compete which is quite something:

Yeah, we were pretty stoked to have the international pro riders at The Night Harvest this year. It was awesome to see them ride and get to ride with them. We are working hard to make The Night Harvest an annual attraction for international BMX and MTB riders and to show the rest of the world that the dark continent is capable of hosting world class dirt events. 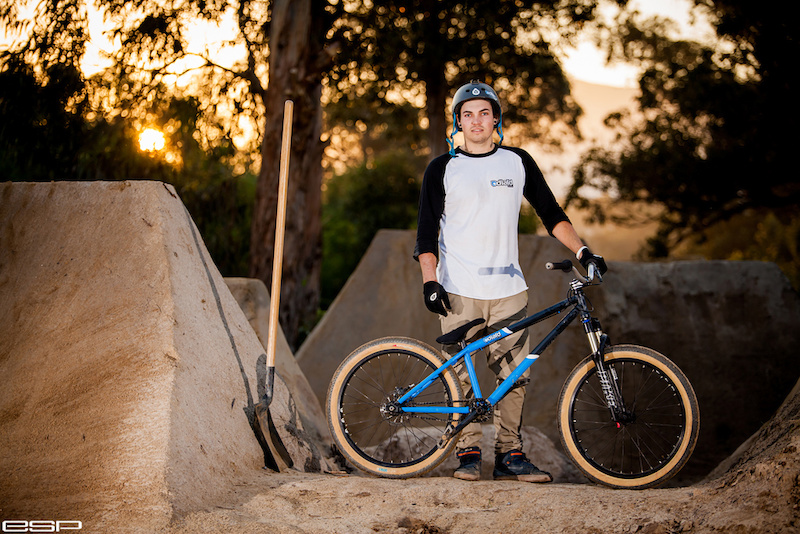 How would you describe your riding style and what tricks have you been working on?

I like to think I’ve got a smooth style which helps when riding dirt jump trails. This year I have been working on a few 360 variations like 3 x-ups, 3 tables and 3 no-handers. I’m working on some backflip variations as well.

You’ve had some experience riding overseas in the past. Tell us about that:

I made the Junior South Africa downhill team in 2006 where I competed in the World Champs in Rotorua, New Zealand and then in 2007 again which was in Fort William, Scotland. It was an awesome experience to get to meet and ride with all the top riders in the world. I definitely want to do more traveling with my bike. My dream has always been to ride at Whistler Mountain Bike Park - a serious trip from the Southern Hemisphere.

The spots I mostly ride these days are my own trails, Soetvlei, and Potato Trails in Hout Bay, Cape Town. The regulars are Ryan Franklin, Thomas Sandell, the Hout Bay crew which consists of Nic ‘The German’ Reichwein, Oscar ‘The #1 Dude’ Hirschfeld, Roman Kumpers, and Jonty Human - all very decent riders.

Judging by your local trails, you’re quite the perfectionist when it comes to shaping your jumps. How long have you been building for?

I’ve been digging at Soetvlei for almost 10 years now. It started with one small knee-high jump and has progressed to where it is now. I wish I knew how many wheelbarrows I have filled at Soetvlei! Shaping is definitely an art that comes together with a lot of practice but it is rewarding to ride trails that you have spent so much time perfecting. 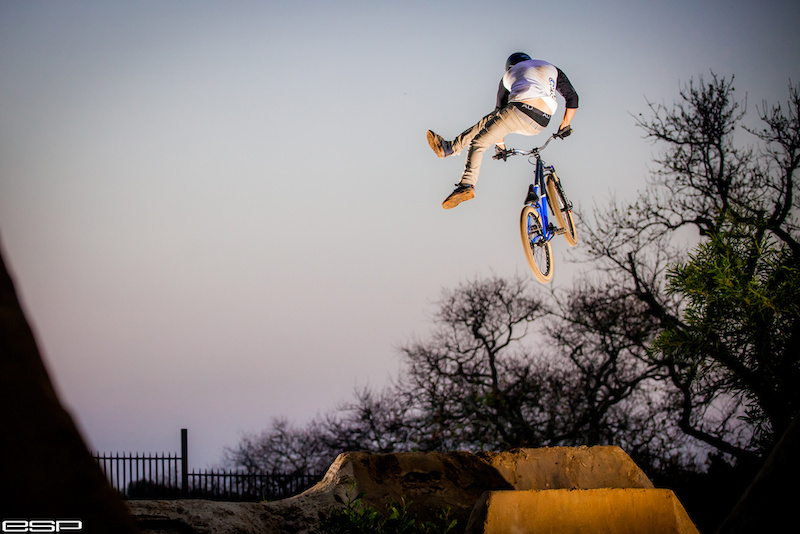 Well, I’ve always thought that there was a gap in the market for gravity riders in South Africa. It used to be so hard to get quality parts from local suppliers, so when we needed parts we had to order them from Europe which took weeks to arrive and we would regularly get shafted from customs on the duties. So I was pretty stoked when I saw Dial’d Bikes announce their launch in 2011. I’m really happy to be part of it now and helping to build the gravity scene in South Africa. It’s local brands like these that support the scene and keep it going.

In your opinion, what’s the current state of the dirt jump scene in South Africa and where would you like to see it headed?

Cape Town definitely has the biggest MTB dirt jump scene in South Africa at the moment with quite a few quality spots to choose from but Its still pretty small compared to other cities around the world. I would like to see more young riders taking up riding and starting their own trails. I would also like to see more competitions and better training facilities in SA to safely practice new tricks. It would be awesome for South Africa to be an attraction for gravity riders all over the world and it definitely has the potential. 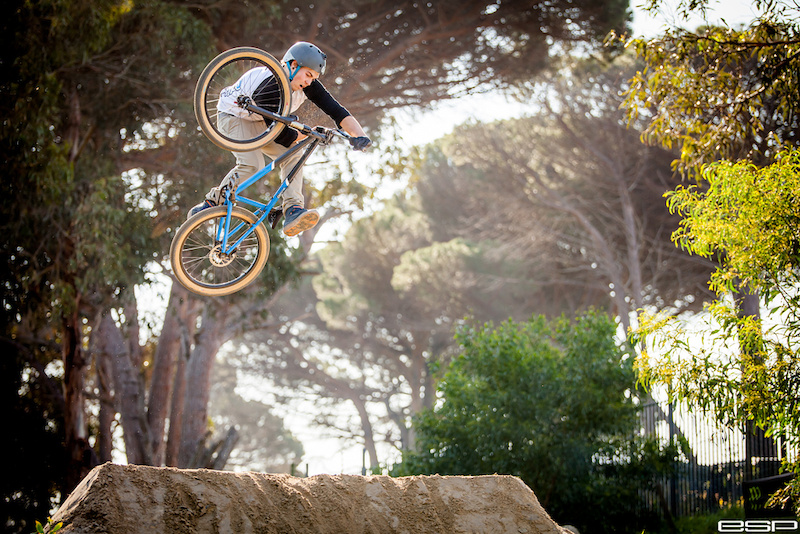 What advice would you give to new riders looking to get into freestyle MTB riding?

The best thing to do is to find a spot and start your own jumps. Start with small tabletops and as you progress and feel more confident you build the jumps bigger and bigger. As your jumps grow, so will your skill level and you won’t feel pressured to jump anything which is not within your ability. It also forces you to learn how to build jumps which is quite important if you want to be a dirt jumper. And obviously... wear a helmet, fool!

Let’s talk trails etiquette. What should new and existing riders know about their local jump spot?

Always respect the trail builders. The term ‘No Dig No ride’ is common decency at all trail spots. There is a lot of time, hard work, and even money that goes into a trail spot. There is nothing worse than arriving at your trails and finding your hard work has be destroyed or abused by someone. A lot of maintenance is required to keep the trails dialled so any help will be appreciated by the locals. 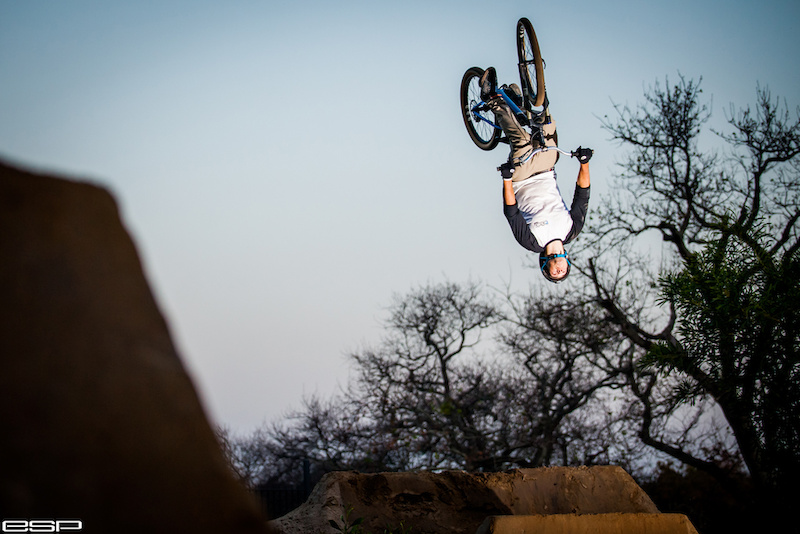 Your first video edit and photoshoot for Dial'd Bikes has just dropped. What was it like putting that together?

It was exciting to get the opportunity to have my own edit and I was really looking forward to shooting it. We were lucky to get the main line at our trails running during a break in our rainy season so we only had had two days to shoot before the rain hit again. I didn’t throw down all the tricks I wanted to in the end but I’m very happy with the result. I’m looking forward to my next one when our new line is working too! It’s great filming with Thomas Sandell at Breakline Media - his edits just keep getting better and better. When he’s not behind the camera making killer edits, he's shredding and has been progressing so much in the past year. He’s definitely another local rider to look out for.

What do you get up to when you’re not riding?

When I’m not riding I’m usually building at our trails and if not you will probably find me working to buy new bikes and beer! If I’m missing from Cape Town, you will find me fishing with my girlfriend, Charly, at the Breede River! 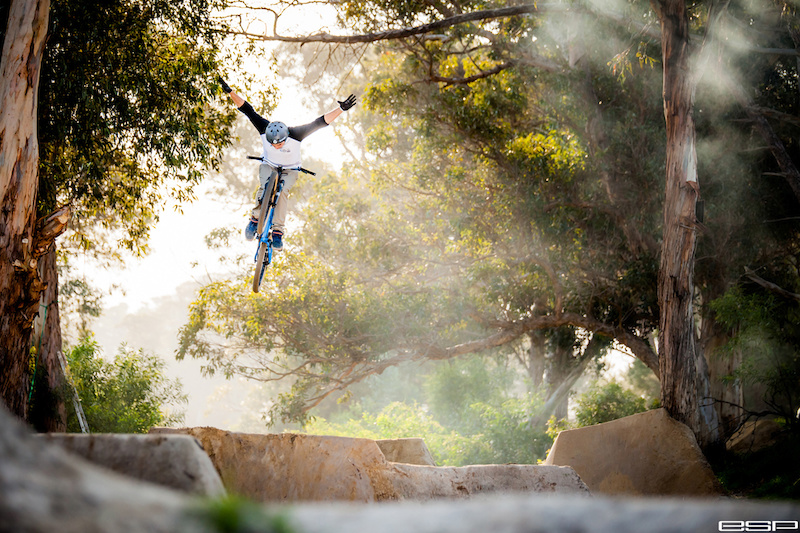 Quesadilla34 (Sep 12, 2013 at 21:56)
Hahahahahah, thats what u took from the whole thing? Lmao, thats great. And wow, were those jumps sculpted from the clouds of the heavens and dropped upon the earth? Because they are soooo perfect!

DialdBikes (Sep 13, 2013 at 1:51)
Justin rides a NS Bikes Majesty frame with a custom vinyl. We're the South African distributors of NS Bikes, Deity, DMR, Dartmoor, Commencal, Nukeproof, 661 and other key gravity MTB brands with one of our core goals being to elevate the industry and talent here in SA.