Join Pinkbike  Login
For the longest time, SRAM was primarily known for their Grip Shift technology. Finally, after years of testing and refinements, SRAM Impulse Technology Triggers were launched at the 2003 Sea Otter Classic. After seeing Shimano going the way of Rapid-Rise and Dual Control, I was excited to see what SRAM’s X-Generation line had to offer. 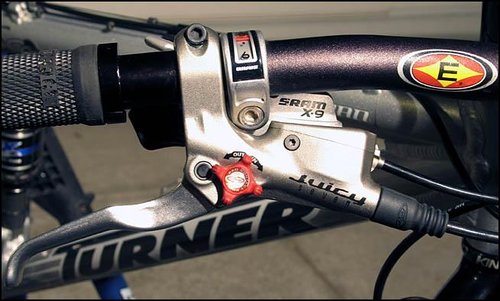 SRAM X.9 shifter mounted on my trail bike
SRAM’s shifters and derailleurs use a 1:1 ratio, but they also make the Attack & Rocket shifters, which uses Shimano's 2:1 ratio if one wants to stick with a Shimano rear derailleur. The front is not an issue since it’s already compatible with any Shimano or SRAM front derailleur. SRAM is giving consumers the ability to use ANY component combo they choose, without forcing them to integrate – that is very cool!

Since then, I have upgraded most of my bikes to SRAM drivetrains. The first bike that got the special treatment was my DH bike. Replaced the rear derailleur with an X.0 and replaced my shifter pod with an X.7. I have to say, it was probably my best component upgrade that season.

This was over two years ago, so needless to say, this review is long overdue. 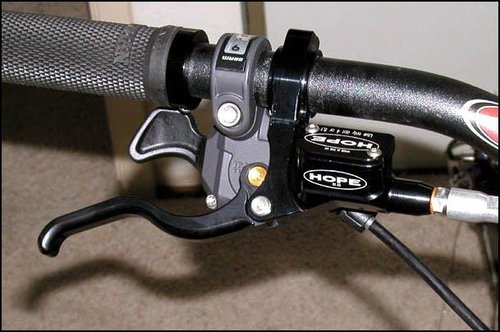 SRAM X.7 shifter pod
Installing and fine tuning your X-Generation drivetrain is a breeze! There is only one barrel adjuster to play with when fine tuning your derailleur – it’s conveniently located at the shifter pod. Here is how to do it in a few easy steps:
1) Mount the rear derailleur, making sure your derailleur hanger isn’t bent.
2) With your rear wheel on, set the B-Adjust screw. There should be about 6mm between the pulley wheel of the derailleur and the tooth of the cog.
3) Install housing and make sure it’s long enough (some cut it too short).
4) Install the chain and cut to desired length
5) Set the High and Low screw Limits
6) Run your cable through the housing and adjust your shifting. Before doing this I like to screw the barrel adjuster all the way in and back it out just a few turns.

There you go, it’s that simple! 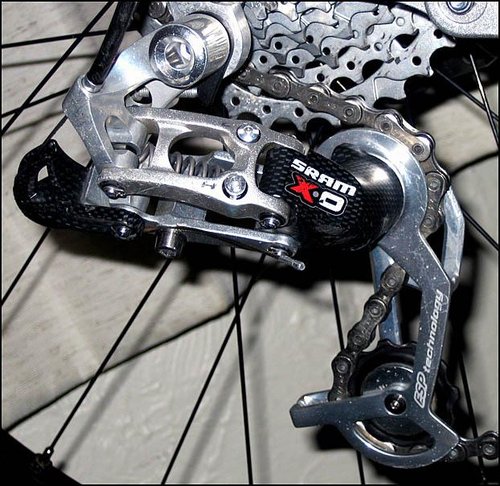 SRAM X.0 Rear Derailleur
At first, I thought it would take me a while to get used to the new Impulse system, which lets you use your thumb to change gears in either direction - but all it took was a few runs and my thumb was already programmed. Another nice thing about the Impulse System is that you can shift and brake at the same time – you can use your index finger to brake instead of using it to upshift.

What’s nice about these new triggers is that you can run them outboard (i.e. between the brake lever and grip - see pic of X.7 above). Also there is no gear indicator sticking out, just waiting to be torn off in a crash - It’s nicely integrated within the clamp. Once they became available, I upgraded my X.7 shifter pod to the new X.9 pod – when I initially upgraded, I couldn’t get a hold of an X.9. The alloy push lever of the X.9 felt a tad stiffer than the composite one on the X.7 – I must say though that I really like the stealth look of the X.7, but that’s a personal preference. 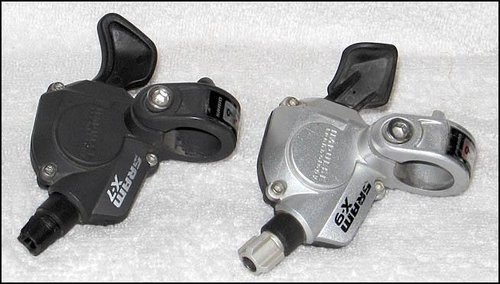 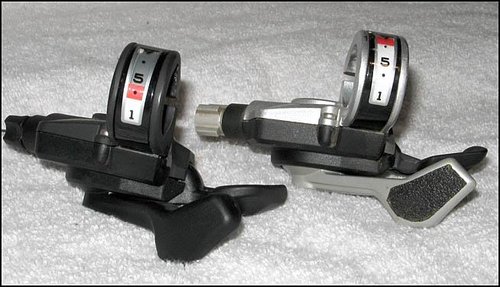 SRAM X.7 and X.9 Trigger Shifters
One thing I never liked about Shimano derailleurs is that pinch bolt (that holds the cable) sticking out on the side – simply waiting to be crushed. I was constantly bending them after hitting rocks, rendering the derailleur useless. When trying to unbend it, it would break. That summer, I was wrecking at least 1 to 2 Shimano derailleurs every single weekend. The X.0 lasted me until the end of the season, PLUS half of the next one.

SRAM’s derailleurs don’t have that protruding pinch bolt, plus it’s got straight cable entry that eliminates cable loops on the back. Due in part by a Titanium extension spring, the shifting is super crisp and precise. There is also no more dreaded derailleur slap and speaking from experience, they sure can take a beating!

I also got to try the X.9 rear derailleur, which for the most part, is identical to the X.0. The only difference it the lack of reinforced carbon composite and titanium parts, in favor of steel and aluminum. Unfortunately I really can’t say that I’ve had good luck with the X.9 – it did work as well as the X.0, but it didn’t last nearly as long.

After only a few rides, the lower reinforcement arm on the main parallelogram broke. I was still able to keep on riding and enjoy a full day on the mountain since it didn’t completely fail. On the positive side, the newer X.9 derailleurs have been reinforced right were I originally broke mine. Proves that SRAM cares about their customers - they listen and then work at refining their products, thus making them better and stronger. 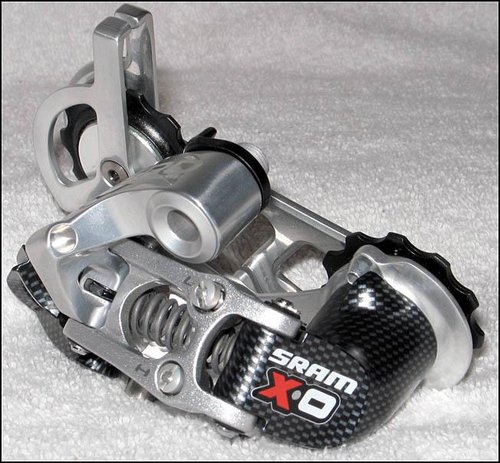 SRAM X.0 Rear Derailleur
First small beef I have with the X.0 derailleur are those 4 main pins that hold the body together. The retaining c-clips at each end are pretty exposed, plus they are located under the body. Hit or grind those bad boys on rocks a few times and you can say “bye-bye” to those c-clips!! Which means the pin(s) will slowly start to come out. This has happened to me on two different derailleurs – it also happened to a friend. Maybe putting them on top might help? I tried replacing them, but it seems that once the c-clip comes out, it’s never as strong as it was originally. They will most likely go missing again.

I’m also constantly struggling when removing the rear wheel off my DH bike - this when the chain is still on. With Shimano, I used to put the derailleur in the smallest cog, take the axle out and the rear wheel would come right off. But with the X.0 it's not as simple! Especially if you are running a big 8” rotor, that tends to be super close to the chainstay. I know it’s as simple as rotating the derailleur backward and slide the wheel down and forward – but I sill feel like I’m forcing something when I do that. So now I simply take my chain off every time I need to take my rear wheel off. Good thing about the PowerLink, it makes it super easy to install and remove the chain. 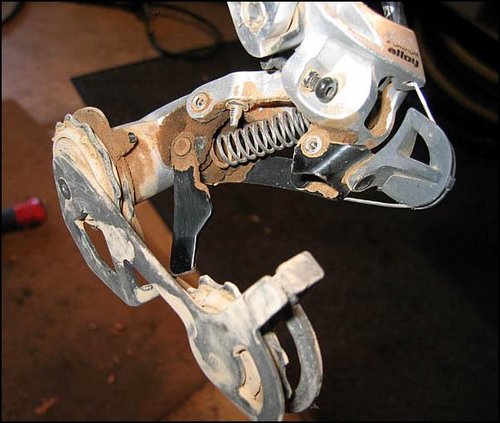 My Broken SRAM X.9 Rear Derailleur
Like I said before – switching over to SRAM’s new X-Generation drivetrain was one of the best upgrades I’ve done in a long while. My DS bike is the only one I still haven’t upgraded. It still uses Shimano a XTR shifter pod and XTR Derailleur - every time I ride it I’m reminded of how great and intuitive SRAM is. When you ride on a DS course you have to shift many times. In some cases, all I want to do is downshift one gear, something not really easy to do with a 2:1 Shimano drivetrain. Also many times I found myself trying to upshift with the thumb when I should be using the index finger.

Both my DH and trail bikes have full x-Generation drivetains, which includes X.9 shifters, X.0 derailleur, PG-970 Road cassette, PC 99 chains and Avid Flack jacket cables. The only thing I still haven’t upgraded on my trail bike is the front derailleur, which I will do in the near future. The new X-Generation front derailleur is pretty nice – it uses an adjustable clamp which can fit a range frame tube sized. Also gives you the option of two cable routings – top OR bottom pull!

My bikes are now silent and smooth! May I also add that the X-Generation drivetrain is a pretty light package! I highly recommend it. 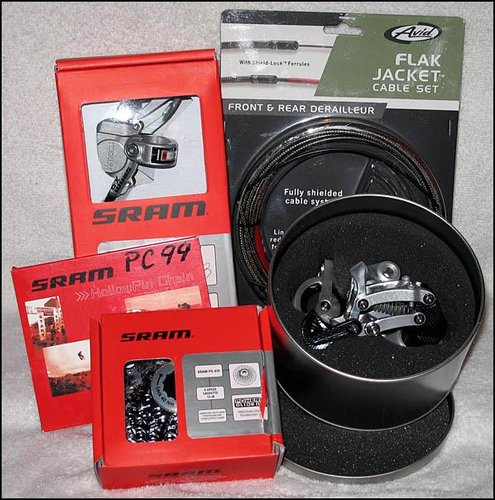