Join Pinkbike  Login
So it’s a week into January and there’s a layer of snow and ice covering your favorite singletrack. What’s a rider to do?
If you’re unadventurous and aren’t looking for a new thrill, chances are your two-wheeled friend becomes a ceiling ornament in your garage. Your wedge-shaped seat is replaced by a big comfy couch and your handlebars make way for the vibrating plastic Xbox controller. But if you can handle sub-zero temperatures and want to keep riding your bike while others are riding the sofa, the good news is there are some great options for studded winter mountain bike tires that will make riding on snow and ice like a day in the park.
The only problem is which tires to go with.Although the options for studded tires aren’t nearly as endless as with regular tires, there are still many choices ranging in price, size and quality.
So we decided it was time to do a comprehensive test of as many winter bike tires as we could get our hands on. The word went out to every manufacturer of studded 26” mountain bike tires and the result was impressive with nine different tires entered representing nearly every winter tire on the North American market ranging from the $40US (each) Continental Spike Claw 120 up to the $125US (each) Nokian Hakka 300.
We wanted every tire to be tested in the exact same conditions, so we turned to some friends at Chippawa-Willoughby Memorial Arena in Niagara Falls, Ontario and they allowed us the use of the whole ice surface for an entire morning. 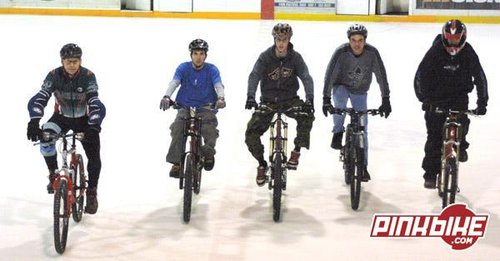 To make for more realistic circumstances, the surface was left uncleaned after being used for a hockey game the night earlier.
Over the course of a few hours, each set of tires was ridden by six different test riders. Every tire was then rated on control, acceleration ability (which also simulated climbing), braking, quality, value and an overall impression. At the end of the day the numbers were put together, averaged out and the winners were chosen. 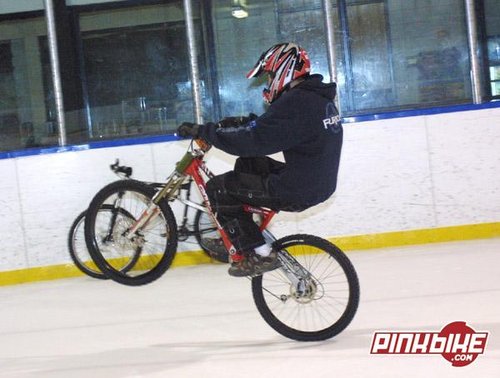 So, (drumroll please), the winners of the Pinkbike.com winter tire shoot are the Nokian Hakka 300 and the Nokian Extreme. At $125US and $100US, respectively, these are definitely not for the light-walleted, but if you want the best of anything, it’s going to cost some serious coin. If that’s a little over your budget, coming in a close third behind the two Nokians (which effectively tied for the win) was the Continental Spike Claw 240, an amazing tire at half the price of the powerhouse Fins.

The Hakka is a 26x2.1” tire made by Nokian, the Finland company that prides itself in being the original maker of winter-weather tires. (Or tyres as they say on that side of the pond.) It features 300 aluminum studs with sharp carbide pins providing maximum grip both corning and going straight. Its only downfall is the hefty $125 price tag.

TESTER’S COMMENTS: “Never expected this kind of control on the ice”…“I’m in love, pricey though”…“Clearly a winner, confidence inspiring”…“A bit pricey, but worth it.”

The $100 US Extreme is also a 26x2.1” tire made by Nokian. Because it’s a wire tire with steel studs, rather than the folding Hakka with aluminum studs, this comes in at about 250 grams heavier. However, the Extreme’s 294 studs provide just as much grip as its sibling, and it costs $50US less for a pair. Go with the Hakkas if you can afford it, but the Extremes are a great option too.
TESTER’S COMMENTS: “Low speed is like riding on dry pavement”…“Nearly impossible to break loose”…“Not great on fast cornering, but makes up in other areas”…“Great traction, but a little high priced.”

At just $50US, the Continental would be the hands down winner for any winter tire under $100. The 240 hardened steel studs provide excellent grip whether accelerating or cornering. The company says its spacious tread pattern allows it to shed mud and ice quickly. It has a wide stance for a 2.1” tire.

TESTER’S COMMENTS: “Good under braking. Some slippage under acceleration”…“Tops in acceleration traction and straight braking. Don’t hold as well in high-speed cornering.”…“Feels like riding on pavement”…“Can’t go wrong for the price.”

Had it not been for the $97.31US price tag, the Ice Spiker would likely have slipped ahead of the Spike Claw for third. With 304 long spikes and a unique tread pattern that includes snowflakes in the rubber, the Schwalbe performed very well.

With a tightly-spaced tread pattern and only 160 studs, the 1.9” Nokian Mount & Ground is designed to be more of a touring tire or used in less extreme circumstances. These would be excellent for someone commuting on city streets, but not necessarily the best choice for someone looking for a tire to be used on a tight trail with lots of snow and ice.

This is the smaller and cheaper sibling of the Continental 240. With an approximate MSRP of just $40US, it was the lowest price tire in our test, yet it still held it’s own fairly well. The tire itself is from the same mold as the 240, so there are unfilled holes going down the centre.

TESTER’S COMMENTS: “Very good in a moderate lean”…“Corners as good as the 240, but not as good braking and accelerating”…“Great value.”

This marks Kenda’s first foray into winter studded tires, and while the pricing is good on both the 2.1” K1013 with 252 studs and the 1.95” 946 with 169 studs, they didn’t perform as well as some of the more established brands. However, the K1013 features studs on the outer tips of the tread, which makes it handle very well. At 1,240 grams it’s almost twice the weight of the Hakka, but the $63US price tag makes up for that.

TESTER’S COMMENTS: “Tires hold well when leaning, but once they break loose, there’s no recovering”…“Side knobs hook up well”…“Turned well, not as good in straight-line braking and accelerating”…“Overall a great tire.”

Although it carries the same $63US MSRP as the 1013, the Kenda K946 has 83 fewer studs, and the difference is noticeable. This is a narrower tire, more designed as a touring tire than a rough trail tire. The testers gave it a low quality rating because it arrived inexplicably missing a stud.

The lower-priced option in Schwalbe’s winter studded tire stable, the Snow Stud is a $56US 1.9” tire. Although it finished 9th in the test, it’s designed to be more of a hybrid tire. It was intentionally built with no studs down the centre, so it can be used in dryer conditions on the road without much rolling resistance simply by increasing the tire pressure. Drop the pressure and it can handle poorer conditions.

TESTER’S COMMENTS: “Breaks loose early”…“Not a bad tire”…“Not much traction on the ice.” 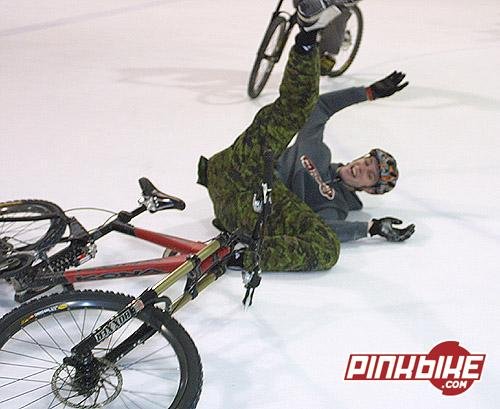