Join Pinkbike  Login
My very good friend Ben Shelton died of Staphylococcus Aureus related symptoms on March 30th, 2005. Some of you may not know Ben directly, but he was a great friend in the biking community, always helping maintain the Pinkbike servers and as a result making sure things ran smoothly for all you viewers. More importantly Ben was a really good friend of mine who I corresponded with on an almost daily basis.Ben was also a ripper. Always fit and ready for the next ride whether it be DH, Freeride, XC or even road. He did not discriminate and was willing to go on rides with anyone, anytime. 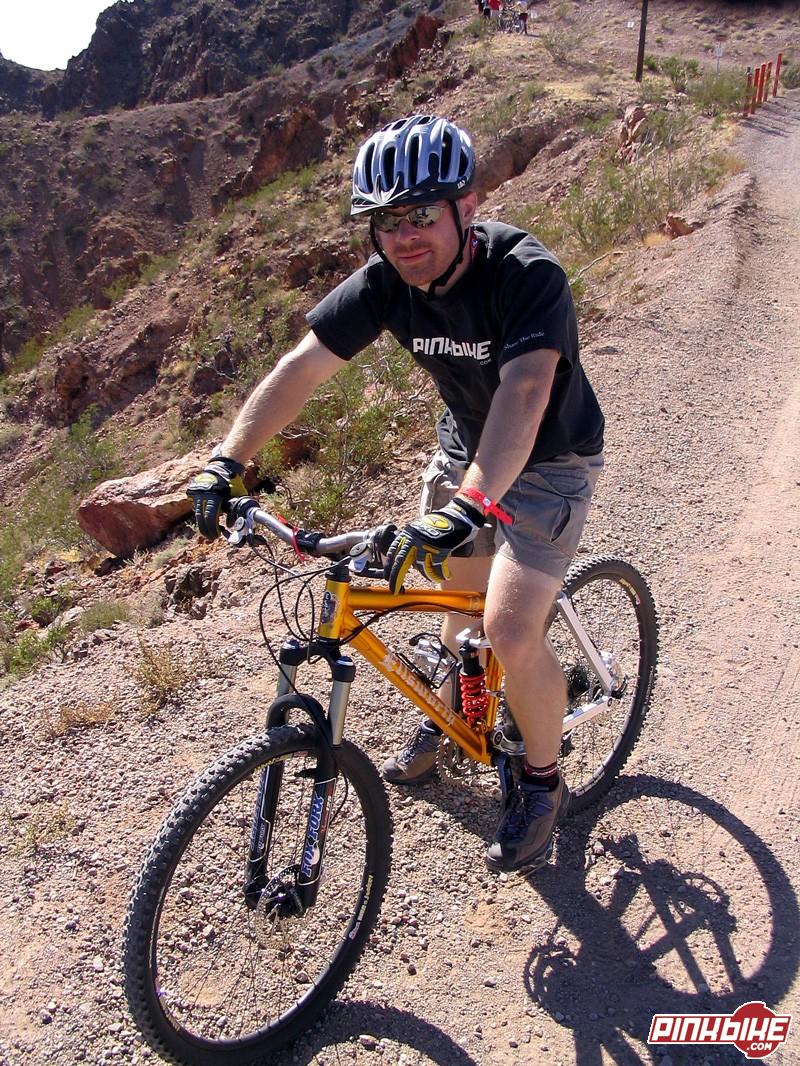 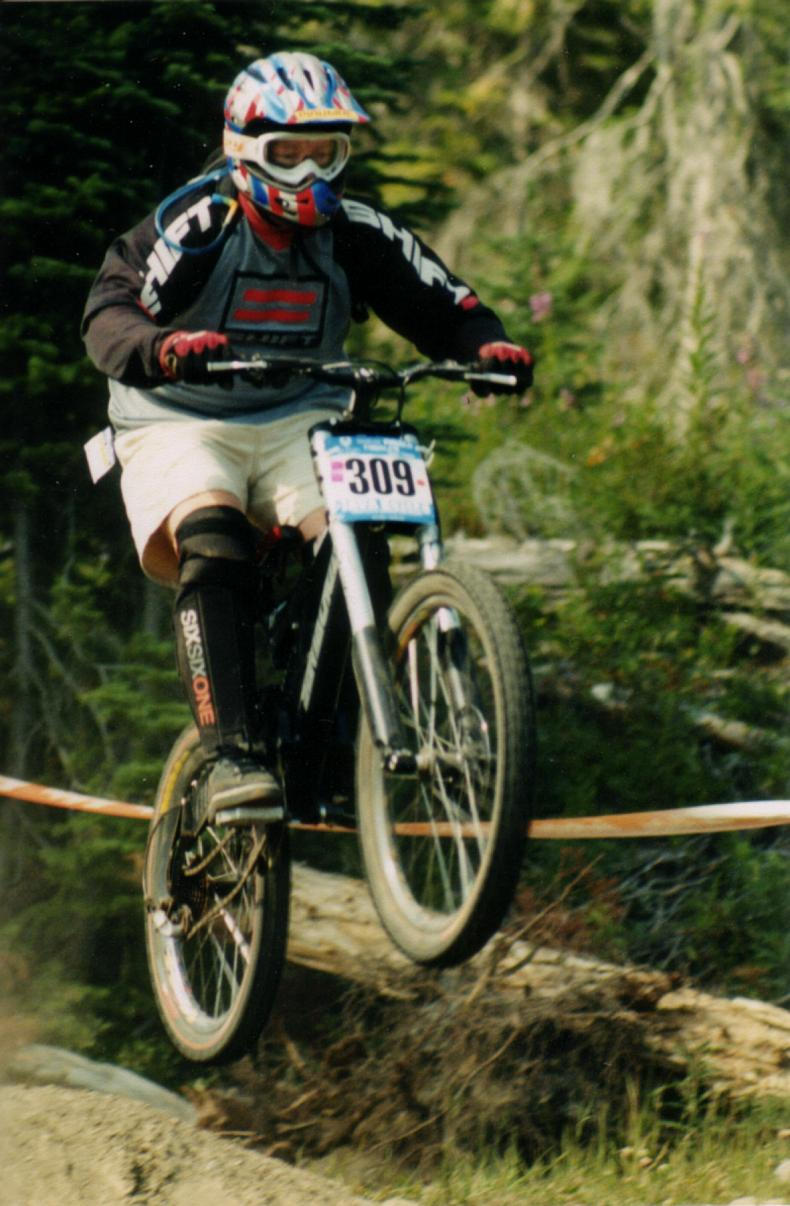 Ben Racing in Ferrnie BC Canada
I am going tell you the unlikely story of how I met Ben and how it turned into an amazing and close freindship.
It was back in 2000/2001 when I was hacking away on pinkbike software, databases and servers. I was doing everything myself, and at the time not quite having the skills to do it right. Pinkbike was always overloaded with users, slow, and sometimes down. One day, I got an email from a rider in Helsinki, Finland inquiring about the situation and offering to lend a hand. Within an email exchange or two, I was chatting everyday to Ben on IRC and Messenger, usually way too late through the night. It's easy to have a good conversation about bikes and technology when you are talking to someone that also shares that love. 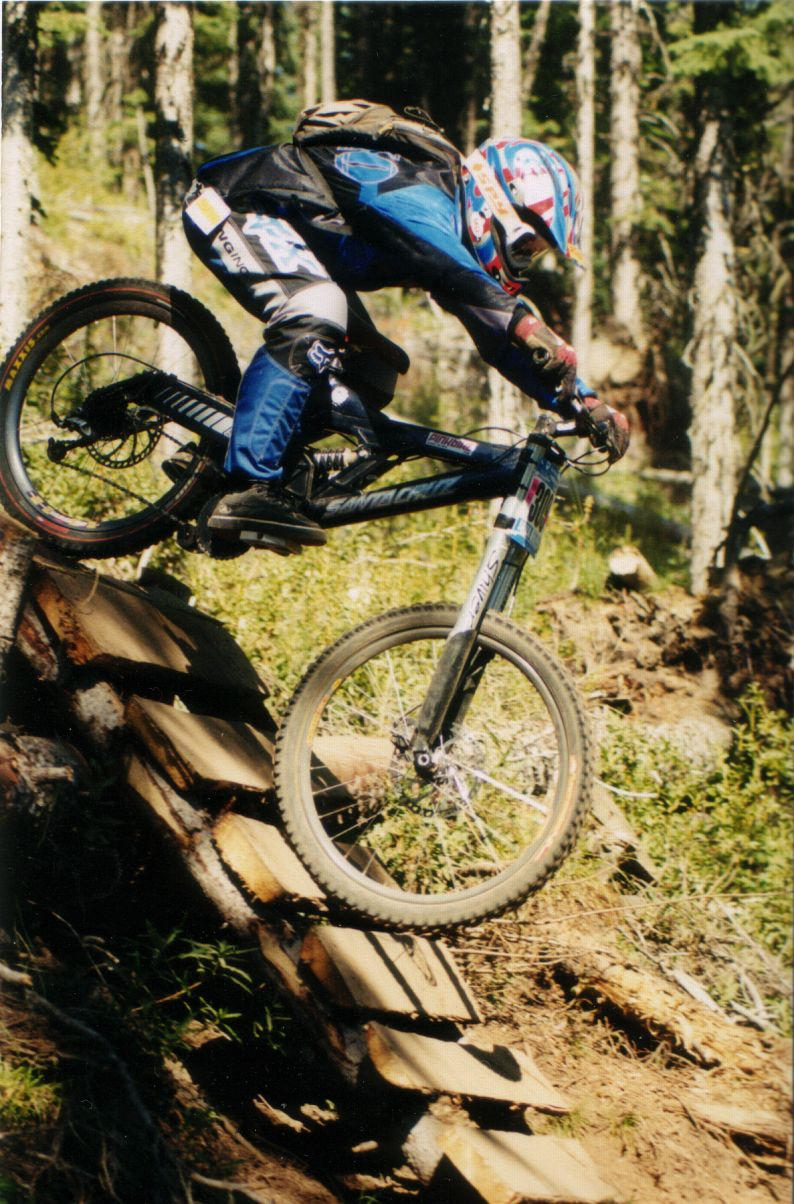 Ben racing at Sun Peaks
A few month later, Ben was planning to come back to North America so his first stop was Calgary, to hang out with all the Pinkbike riders and check out the local trails.
The years after that Ben was living in Portland, Oregon working at technology firms. Almost everyday, I would have a chat with Ben about the latest technology article, computer peripheral, internet social norm, and the most recent article on Slashdot 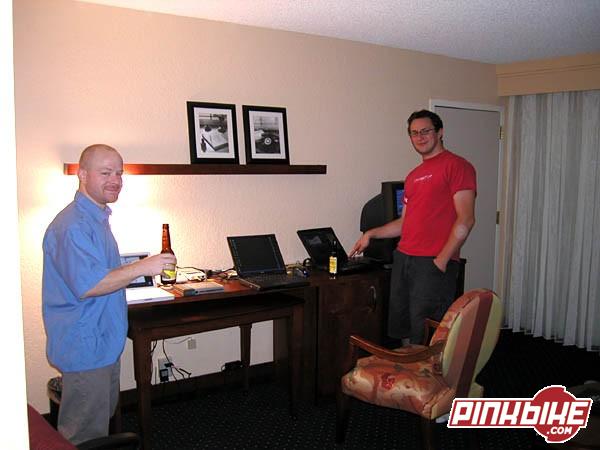 Ben and Radek
Another passion of Ben's was beer. I mean good beer. Where ever he was he always wanted to check out the small local breweries and usually knew where they were in your city, even if the locals didn't.
About a month ago Ben came up to visit Chilliwack and not to my surprise he had a Mapquest map printed out ahead of time with the location and directions to sample the local offerings. 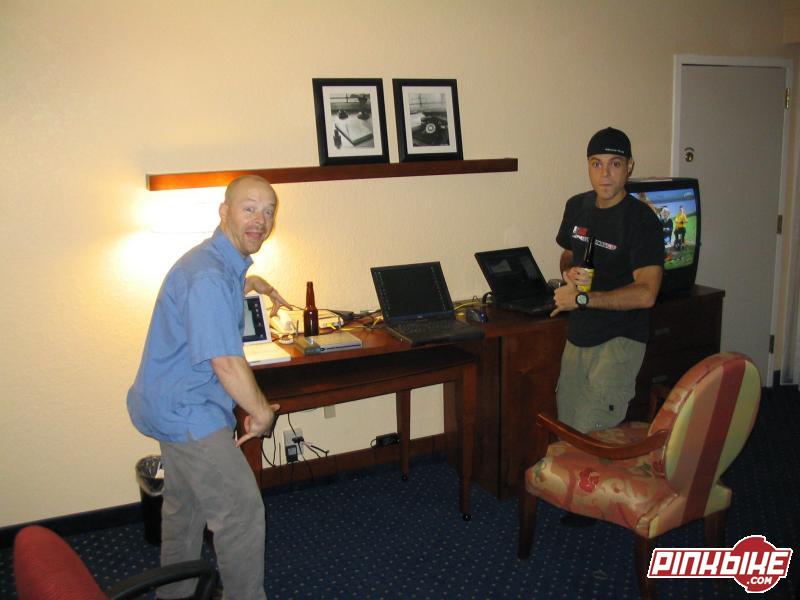 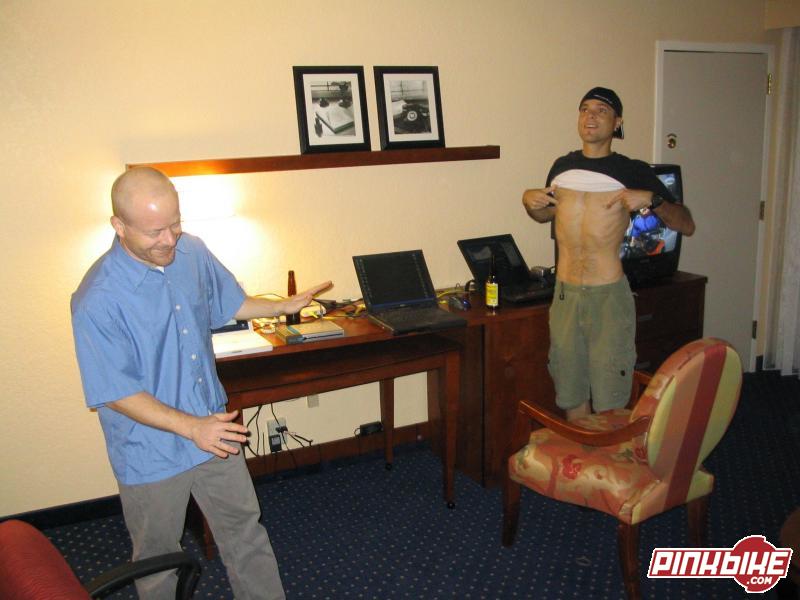 Ben and Luc
Ben was the ultimate hacker. He would install Linux on your toaster if he could. On his last visit up we spent a whole weekend cross compiling kernels, refining boot loaders for custom hardware, in between talking about the latest biking technology. 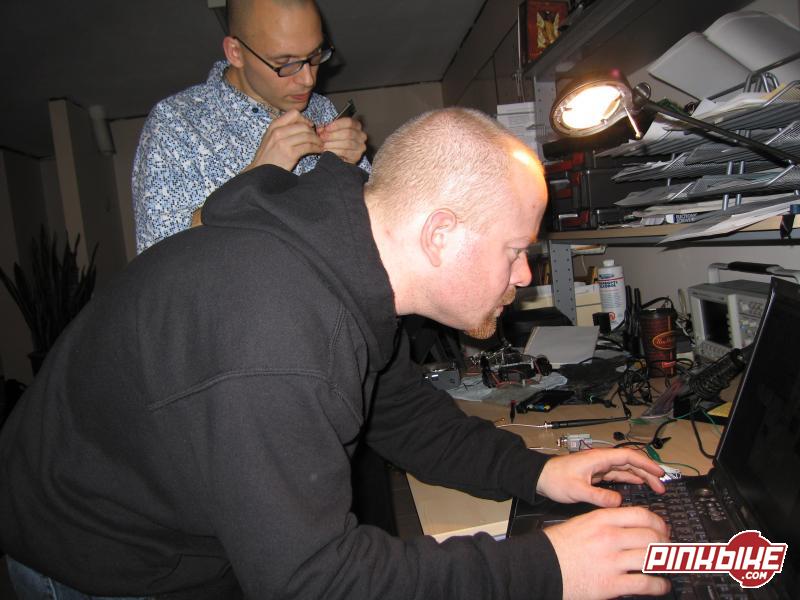 Ben and Derek geeking out 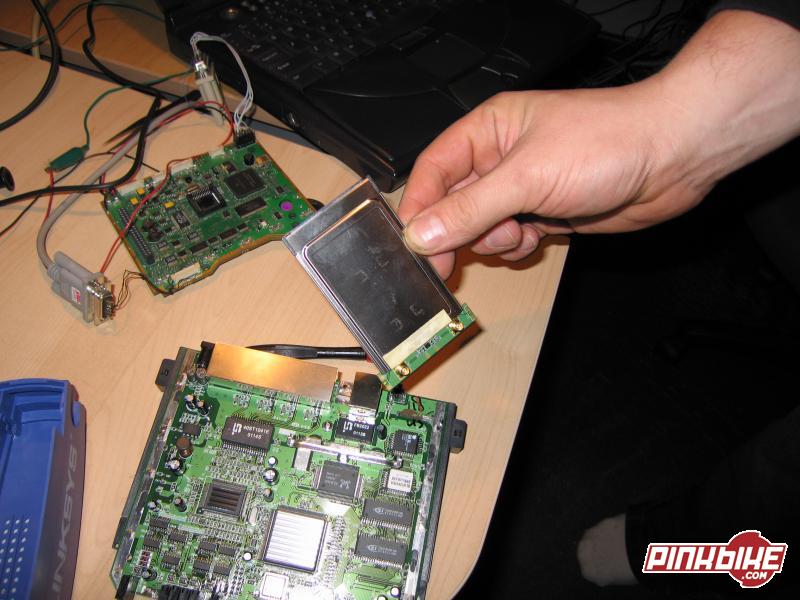 Ben with a reclaimed card
My last memory of Ben was when Derek, Ben and I spent the whole day and night compiling custom Linux loads for my Linksys Wireless routers, increasing the transmit power by 10 fold, ripping apart another router and using the variable power, external antenna PCMCIA card from it in Ben's IBook. All in an effort to be able to go to the 24 hours McDonalds, 2 blocks away, while still connected to the internet. It does not get any better than that. 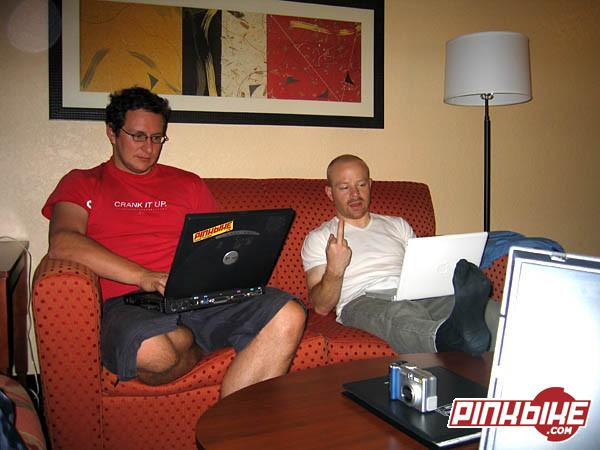 Radek and Ben geeking out

I talked to Ben last week on the phone. He was supposed to come down on a biking road trip to see us but he was complaining of being a little under the weather. He did not think it was anything serious since he mentioned that it may be his allergies acting up due to being around some animals recently. Sometime on Thursday Ben collapsed and passed away in his apartment. He was found by a friend a day later. The cause was Staphylococcus Aureus, a bacterial infection that can be fatal if not treated right away. 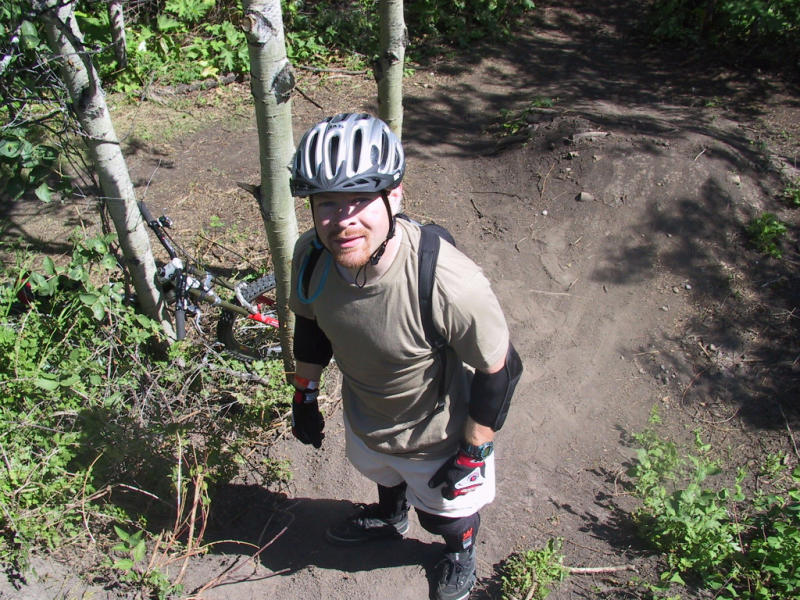 I feel a little lost sitting down at my computer this morning without the friendly "yo, what's up?" as my first wakeup call. Ben was always there for his friends, ready to lend a hand, his insight, and opinions. The worst part about all this is that I couldn't be there to help you when you most needed it.

So in memory, buddy, I'm going out for a ride in this pouring rain for you and then I'm going to the brewery to get some of that beer you liked so much. You always wanted me to convert fully to the Apple/Linux desktop so when it comes out, I'm going to buy that Apple G5 Powerbook we talked so much about getting and I'll give it my best, knowing that everytime I run into a problem I'll be thinking of you, and how you would always have the answer I was looking for.
Most of all though, carry on in your footsteps, always helping those that are in need. 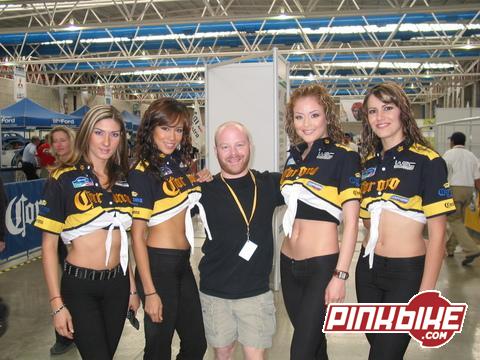 Antistatic Matrix Lot's of links to other photos and stories.