Floripa, the nickname of Florianópolis, is an island on the southern coast of Brazil, famous as an official stage of the WCT Surf championship as well as a regular host of the IRONMAN. Its rolling hills with rocky cliffs form 42 officially named beaches (more than 100 according to locals) and 7 dune fields. These places were hardly explored by mountain bikers in the area, since the soft sand was never a good friend of cycling … until now. 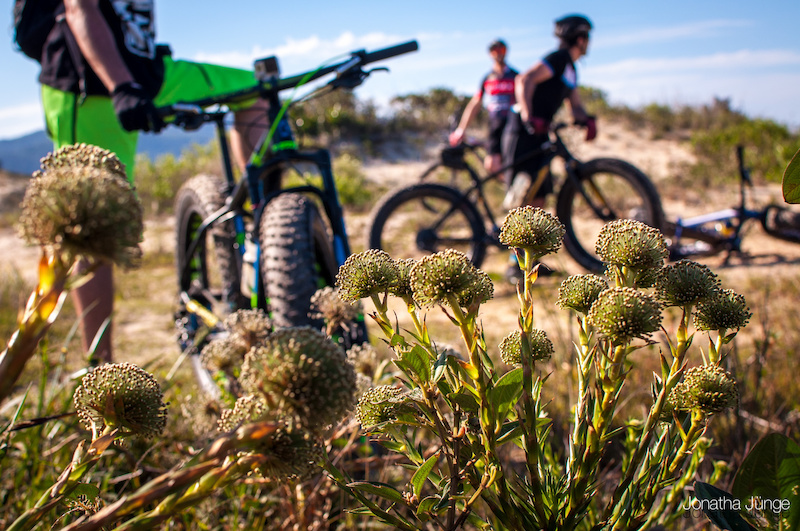 In 2014 Normando Pereira, a known local cyclist and Brazilian former DH champion, living close to the Joaquina’s Dunes City Park, decided to get a Fat Bike to explore their potential through the sands and beaches of the region. The video here gives clues about what Normando felt when he first got the Fatty in the sand. Soon others followed in his footsteps and today there are at least 12 FatBikes in Florianópolis, and dozens of other looking forward to hop on one. 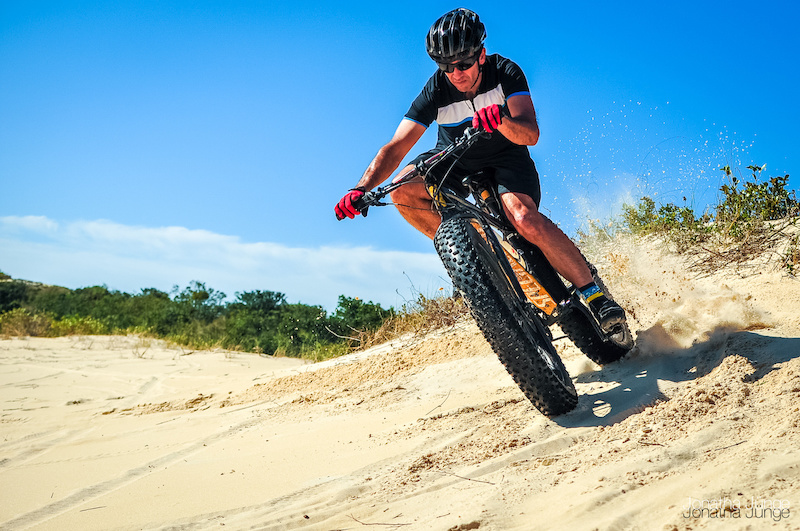 The FatBikes are still relatively rare and exotic in Brazil. It is impossible to ride them anywhere without drawing attention, especially in the high season crowded beaches. But it is in the middle of the dunes, where hardly anyone ventures either in the summer heat nor in the windy days of winter, that the FatBikes has its unique playground. Up and down sandy hills, dodging lakes formed by rain, enjoying the small valleys that becomes like the concrete bowls of skateboarders. Beaches with more than 9km are now possible crossings in the search for new paths. 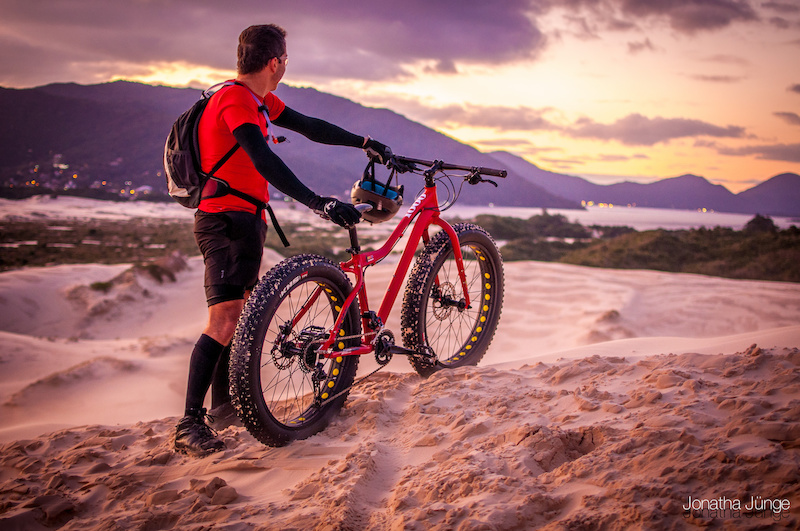 Deserts and snowy mountains seems to be opposed environments, but they also hold similarities in the characteristics of their terrains. In the 90s it was realized and the tropical version of snowboard has become a new sport in Floripa: sandboarding. It was then that locals nicknamed Waimea the large 60meters high dune, named after the famous big waves bay of Hawaii. 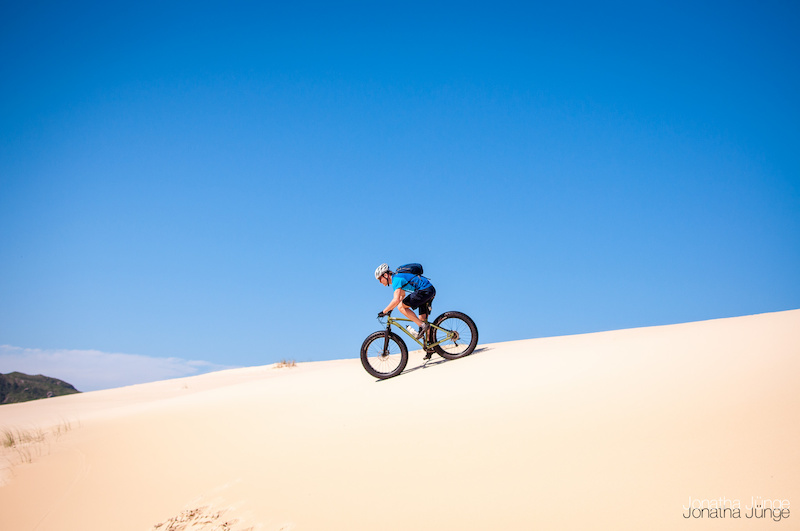 Now it was about time to import another snow sport for Floripa sands with the FatBikes. It is certainly not the first sandy place in the world to do this, but the quality of the dunes, the humid climate of the rainforest and especially the incredible scenery of the island that can make Floripa a potential FatBikes top destination. 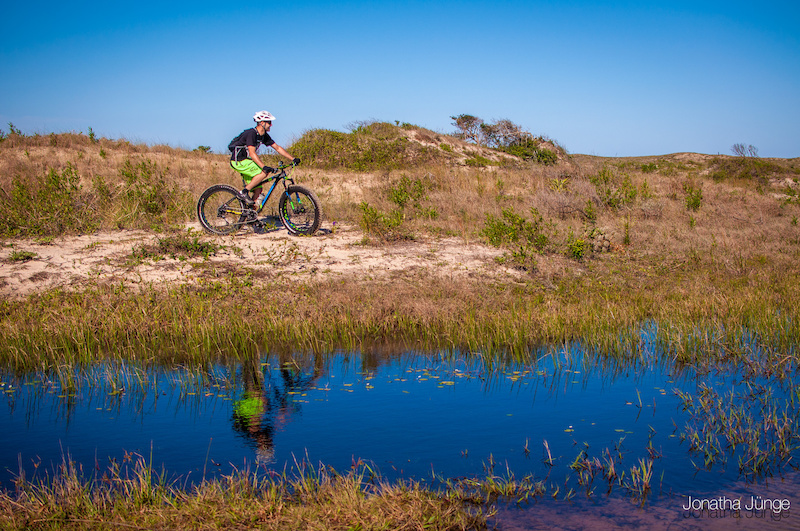 The main place of Floripa for Fatbikers is the already mentioned Joaquina’s Dunes City Park, which stretches through the famous Joaquina and Campeche beaches, with over 30km to ride, including the large drop of Waimea and 5km on the shores of the Atlantic - and is only one of the 7 dune fields in the island. It is important to mention that because it is a new activity, the use of FatBikes within this park has not yet been regulated. The local group of mountain bikers are already in contact with local authorities to try to define the rules and allow the responsible use of the parks for the big wheels. 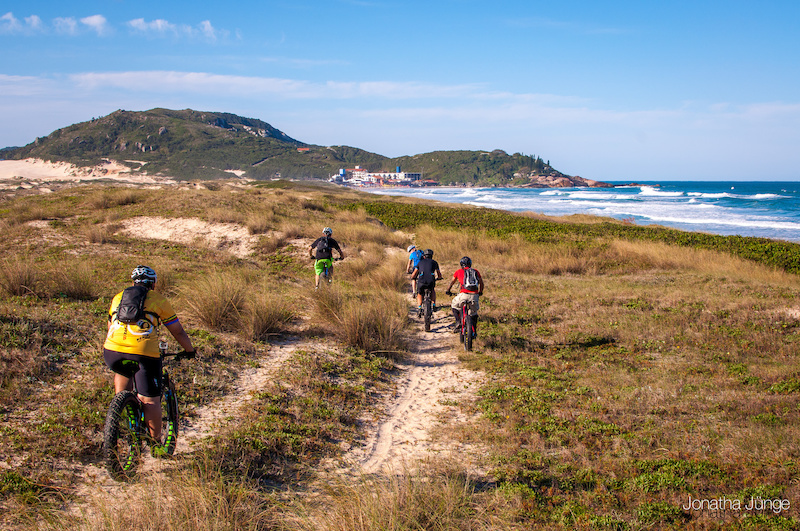 We invite you all to come here ride Fatties on our sand. To help organize the growing scene of FatBikes in the country, we have just created the FatBikeBrasil.com, feel free do drop us a line. 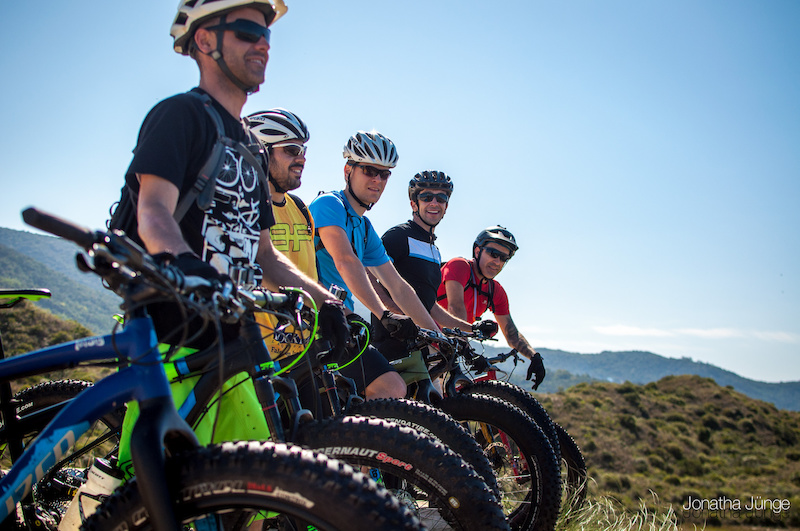 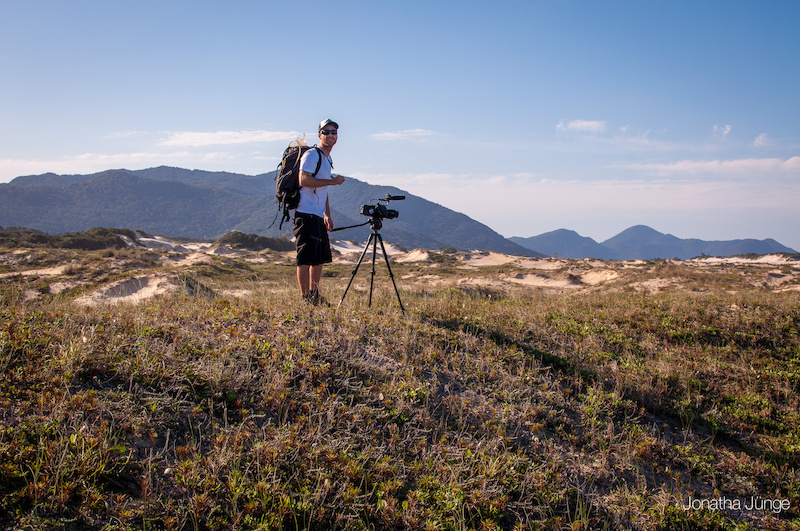 The Sand'n'Fatty video was produced by RootRider TV and Caminhos do Sertao Bicycle Tours. Drone images from Nata Giacomozzi.

Words and photos by Jonatha Junge.