Quick catch up with Katy Curd

Join Pinkbike  Login
Katy Curd is flipping ace when it comes to riding anything with 2 wheels - and now she has quit her job - she wanted more free time to focus on her riding and racing for 2010. We can be sure to expect some impressive results for Katy to build on this season.

I took some time to catch up with Katy and go over her year so far and to discuss the ups and downs in the world of racing mountain bikes. 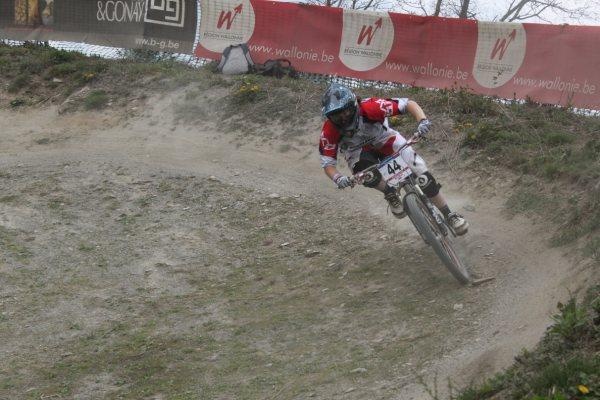 Katy getting the job done in Belgium
Hey Katy - How are you doing? What have you been up to recently?
Hi, well I have just got back to the UK from Belgium, which was really good fun, I drove out there with Pat Cambell-Jenner and team mate Tom Dowie which was an eye opener in its self, some of the conversations that I got dragged in to were just wrong! But enough said about that, Belgium - the track was pretty tame, no big jumps or technical sections just fast, loose, drifty corners with a couple of tight corners thrown in the middle, which I think was good from a spectators point of view as it made the racing so unpredictable with all the carnage going on in the first two corners. There was a good crowd there on Saturday night for the race, with all the Belgium people going nuts, shouting, blowing horns and trumpets every heat, there was even a streaker at one point! Although during the day there wasn't really much going on, the days just consisted of a lot of waiting around until practice started. It was really odd not having to get up early to ride downhill like at every other world cup, it just seemed to chilled out to be a world cup event. The one thing I can't complain about though is the waffles, those things are dangerously addictive! 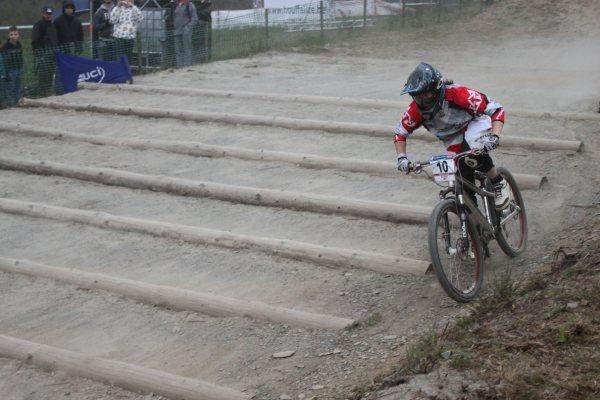 Katy getting pinned
Are you happy with 7th at the first round of world cup 4X in Belgium?
Yeah I am pleased with 7th place, I just wish I wasn't injured then I could of been a bit more daring and hit those all important inside lines, but then maybe it paid off as I stayed out of trouble and got a decent result in the end. Yeah I came off up at Glentress 3 weeks ago, I just came down a little right hander in between two rocks, flicked my bars just at the wrong point and jammed my front wheel in between the rocks sending me flying over the bars on to my shoulder, I damaged my ac joint, bruised the end of my shoulder bone, damaged the tendons in the back of my shoulder, strained the ligaments and a possible chip of the bone or hair line fracture. It's the most painful injury I've ever had and it was done whilst riding the most simple thing! As soon as I did it I thought that was it, season over before it had even begun, but I got back home and got treatment on it everyday leading up to the world cup with Team Breakthrough, with the treatment they gave me within a week I was able to start moving it around again and well within 2 weeks I was out at the world cup riding again still in a fair bit of pain, but I was just happy to be riding, so a big thank you to Matt Chapell at Team Breakthrough. I'm still having treatment with them so I'm hoping it won't affect my results too much and I will be back on form in no time.

You were telling me that you and team mate Tom Dowie had a bit of an issue with sponsorship at the beginning of the season - you guys ok now?
Yeah we did have a little bit of trouble at the start of this year with sponsors, which didn't leave us in the most ideal position to kick start the 2010 season, but it seems to have worked out all ok. We thought we would take a bit of a different approach and instead of trying to find a new team to join, we'd team together to create our own little team. I've known Tom for a little while now and he's a real good guy to be around, as he takes racing seriously and is determined to get some good results, but at the same time is just happy to be out riding his bike. Tom is a qualified mountain bike coach and a good one at that, he's got some serious skills on a bike and is always happy to give advice to anyone in need of it. Riding and training with Tom has really helped me as I have learned a lot from him, it's just the little pieces of advice that seem to go a long way. 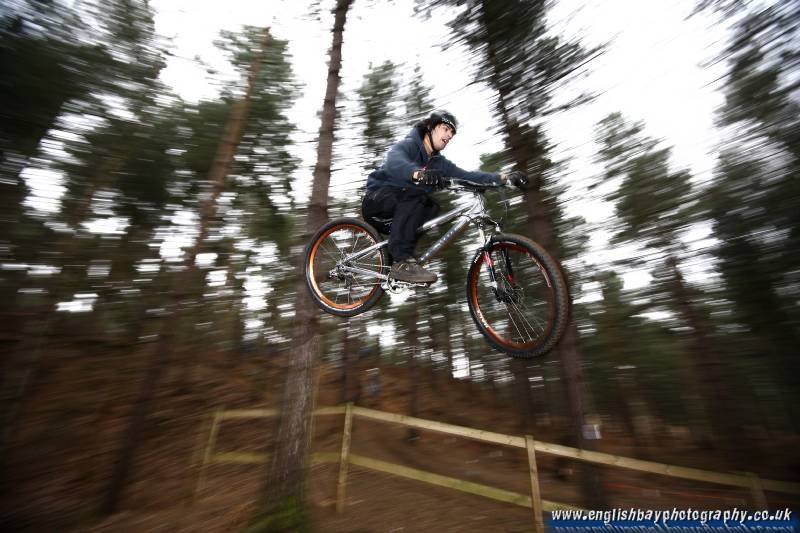 Tom Dowie training at Chicksands
We are really grateful with all the support we have received from various sponsors. We shall both be riding Identiti Krisis SL frames for 4X kitted out with Halo wheels, RockShox forks, Sunline handle bars, stem, grips and pedals, Maxxis tyres, MRP chain device, Renthal chain ring and Gusset seat. Royal Racing are kindly supporting us for this year so we will be looking fresh in our new red and white Royal kit whilst being protected by 661 armor. As well as 4X I will also be riding downhill on board a Rose Beefcake, again kitted out with Sunline Components and rolling on Maxxis tyres. I've also got a nice new Rose Granite Chief which I use for training around home, I've not had it for long, but I've put a few miles on it already, it rides like a mini downhill bike when hitting the trails on it, but yet still climbs up the hills real easy. 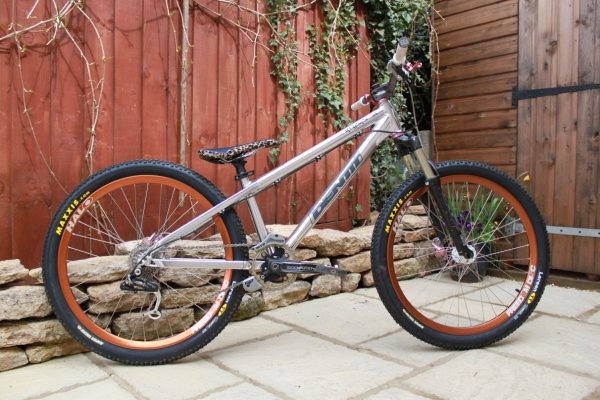 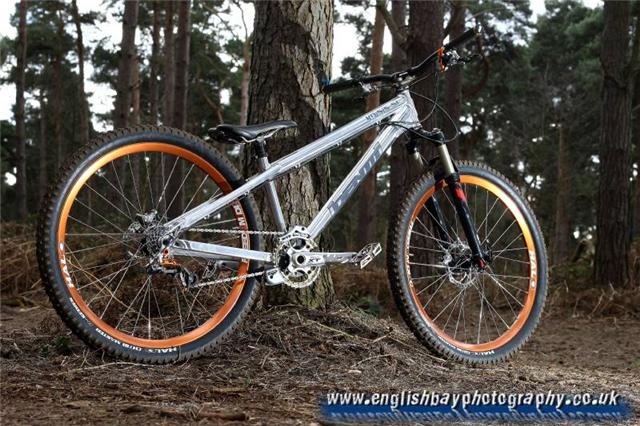 Tom's 4X Beast
Are you living the dream yet, riding bikes fulltime or do you hold down a normal job too?
For 7 years I worked in a local pub which was like 2 minutes from my door. I used to work mainly in the kitchen standing in for the head chef on his days off and if they ever needed me I'dd work behind the bar which was a good laugh as all the locals down there are a real good bunch of people, but I stopped working there about 4 weeks ago as I thought it was going to be too much to train, travel, race, and then come back and work. It is pretty odd not having a job, but it has given me a lot more time to start focusing on riding. I get bored easily so sitting at home is never an option for me, I'm always out riding whether it's at the bmx track, trails, xc, downhill I'm always out doing something.


What are you racing this season and are you mixing it up with any other sports?
I think for this year I will be sticking to downhill and 4X. Before injuring myself I had been training specifically for 4X, I just want to try and get some consistent results under my belt for this season as both Tom and myself are trying to compete in the full world cup series, the UK national series as well as a few European rounds too, so we've got quite a busy schedule as it is, so I don't think I've got much time for another sport!

Thanks to anyone?
Can I say a big thank you to all our sponsors for this year, Rose, Identiti, Chicksands Bike Park, Halo, MRP, Norfolk Line, Team Breakthrough, DK Racing, Maxxis, Sunline, 661, Royal Racing and Sound Marketing.