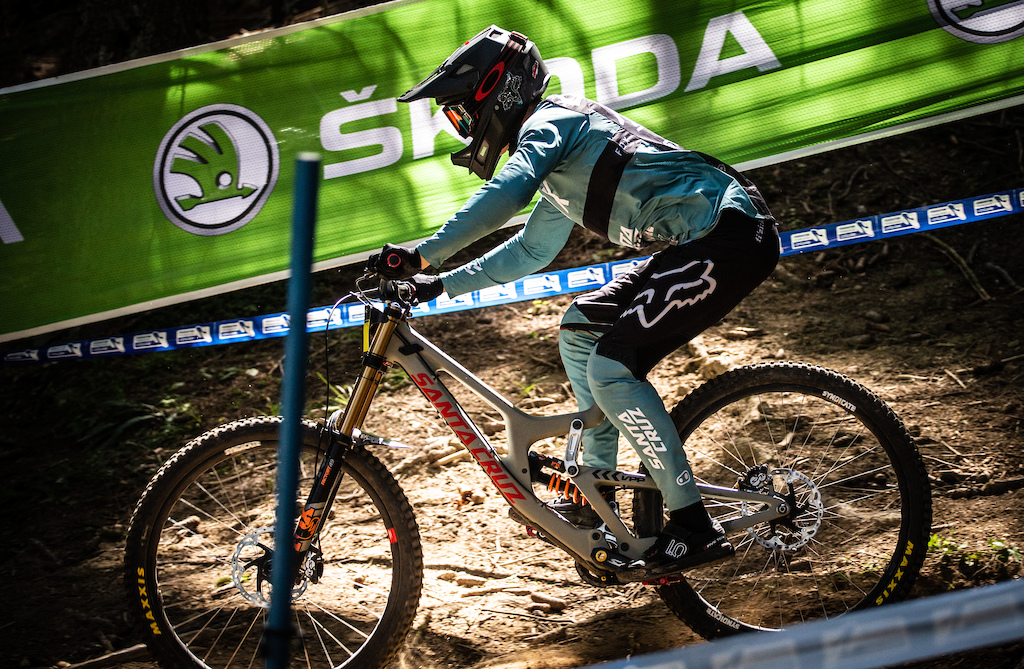 Loris Vergier looking comfortable in practice
The 2018 French Downhill National Championships went off in dramatic fashion over the 26th - 28th of July. Weather played a huge part in the event, with the course every bit as we thought in our track check, fast, loose, with plenty of technical off camber, fresh loam and demanding steeps that became treacherous in the slippery conditions for finals!

Thunderstorms were a factor over the whole week, with one biblical downpour during track walk. The threat loomed large the evening before practice, with the heavens opening the morning of the race itself. Though some blue skies did appear for early practice, the alpine rain had a huge impact on the race itself, turning the dry, dusty conditions into a muddy slip and slide in a matter of minutes....

Practice began on Thursday morning after substantial rain the night before. Luckily for track conditions there had not been too much moisture for the previous two weeks. So, conditions were dry, if a little slick in places, for the opening riders to get a handle on things. 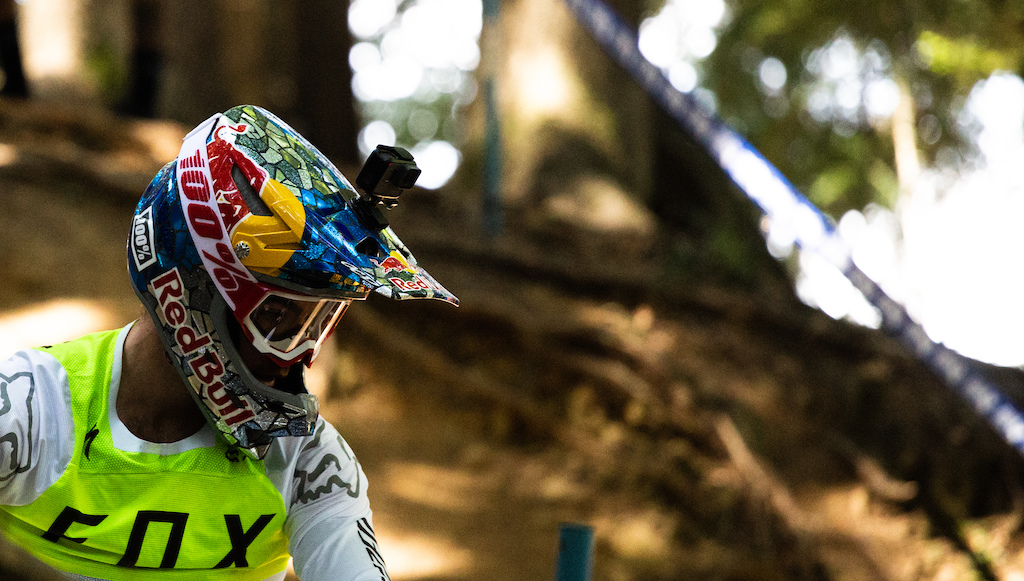 Loic Bruni
The first day riding was a calm affair, Loic Bruni enjoying the relaxed atmosphere, on Instagram "minty and chill." Most of the top World Cup Riders such as Loic, Loris Vergier, Amaury Pierron, Thomas Estaque and Myriam Nicole were all riding at a calculated pace during the first practice day. 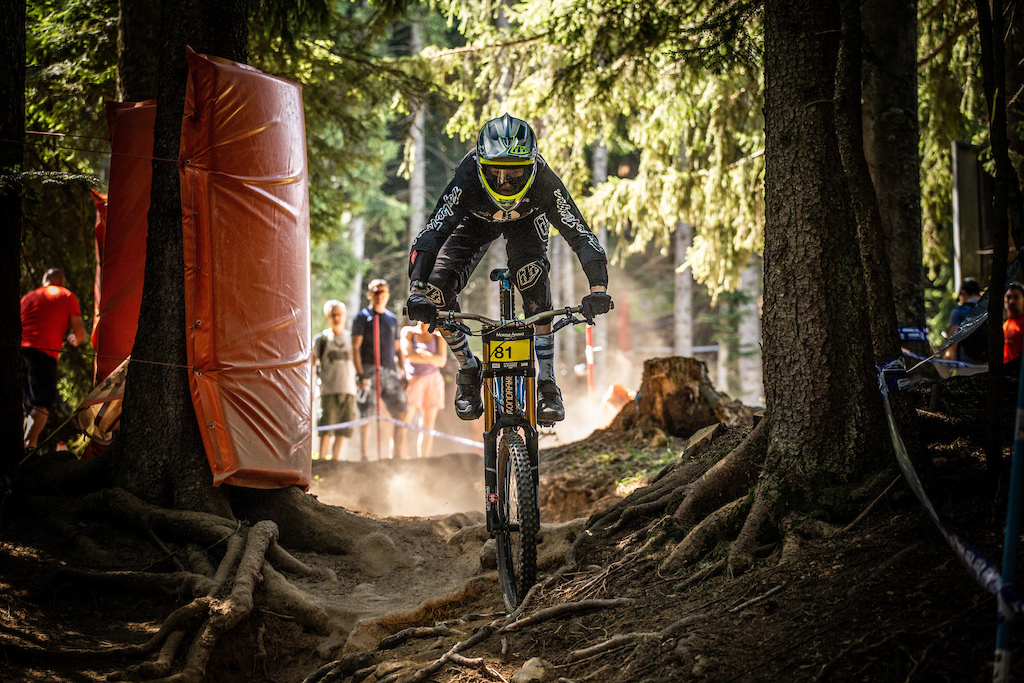 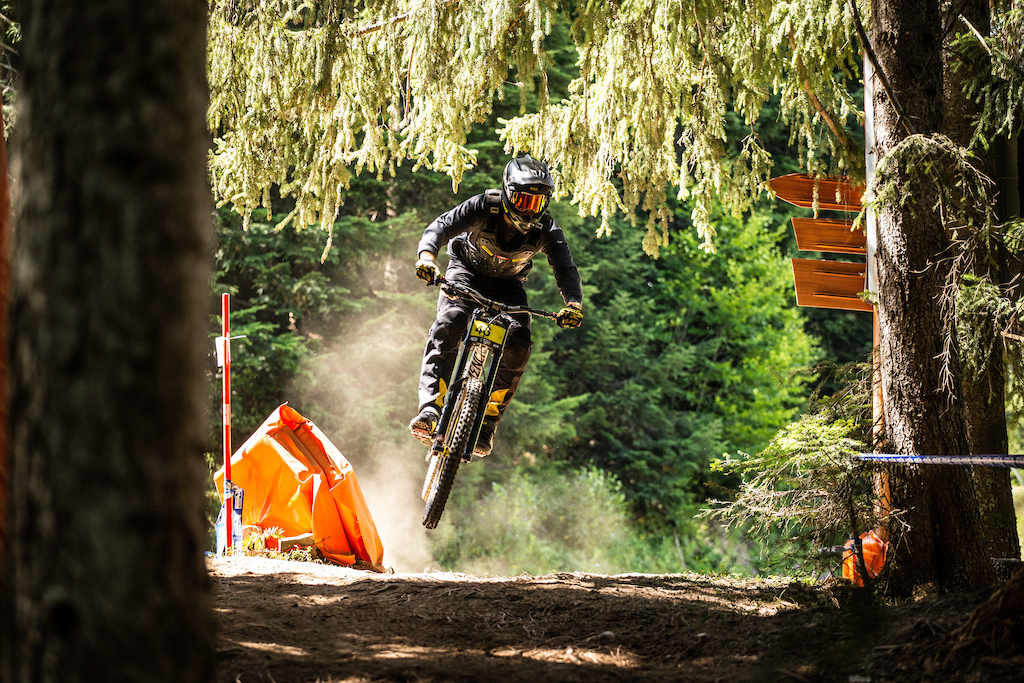 Remi Thirion was an exception to this, looking up to speed and full gas from the start! The French field was stacked with talent not only with the names we all know.
Line choice seemed to be important, with some sections taped wide, some taped very tight. Check out our RAW footage from day one here.

The track very quickly started to show it was not going to be straight forward to conquer. Within hours of practice, opening sniper roots and benches had appeared in the fresh, and older sections of Pleney. 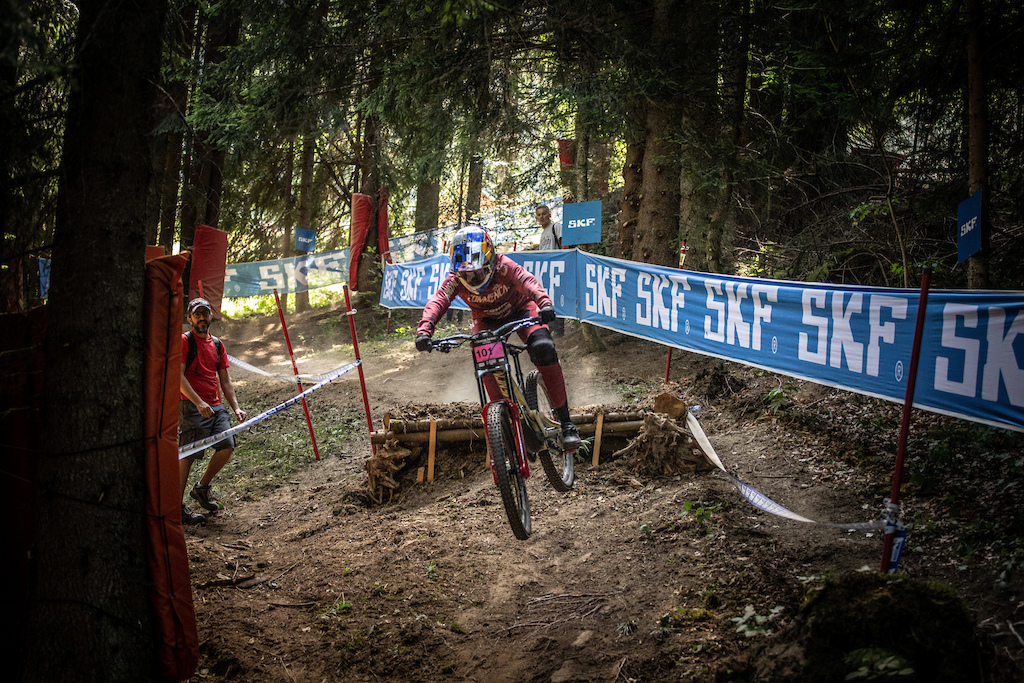 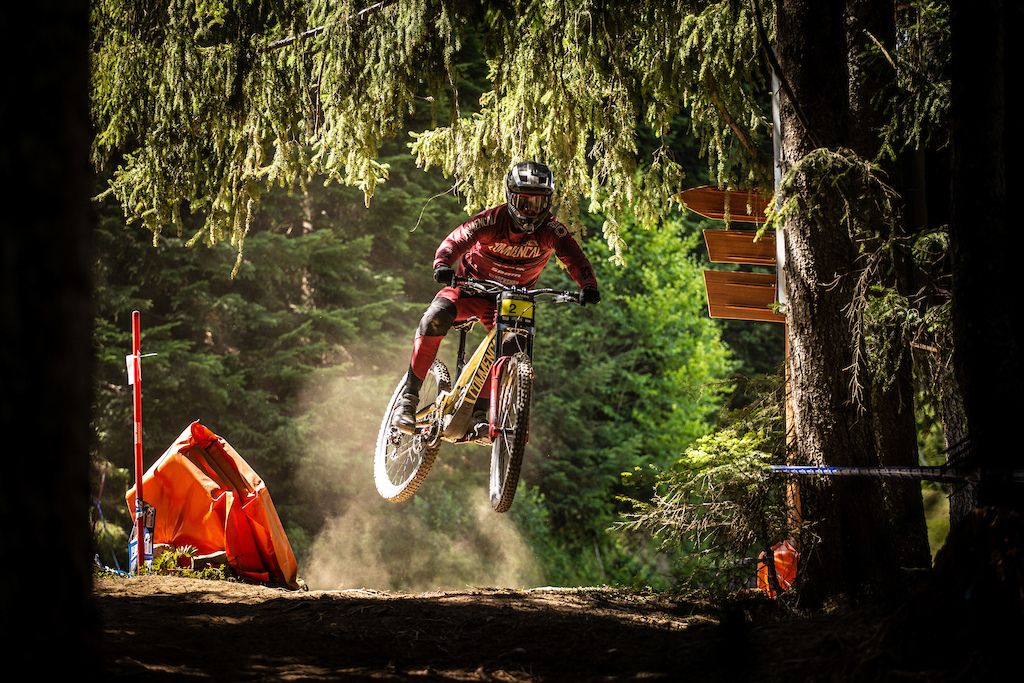 Myriam Nicole and Amaury Pierron on hot runs in seeding
Seeding was where things really started to heat up, the crowds grew and so did the atmosphere. Amaury Pierron carried his stunning form this season into Friday and placed first, crossing the line with dust on his sleeve from a small crash mid way down! Thomas Estaque proving his worth in the steeps on a flyer in second and Loris Vergier, fresh from his first World Cup win in Andorra in third.

Myriam Nicole, back from injury took first by just over a second from Marine Cabirou and Enduro Queen Cecile Ravanel in second and third respectively. 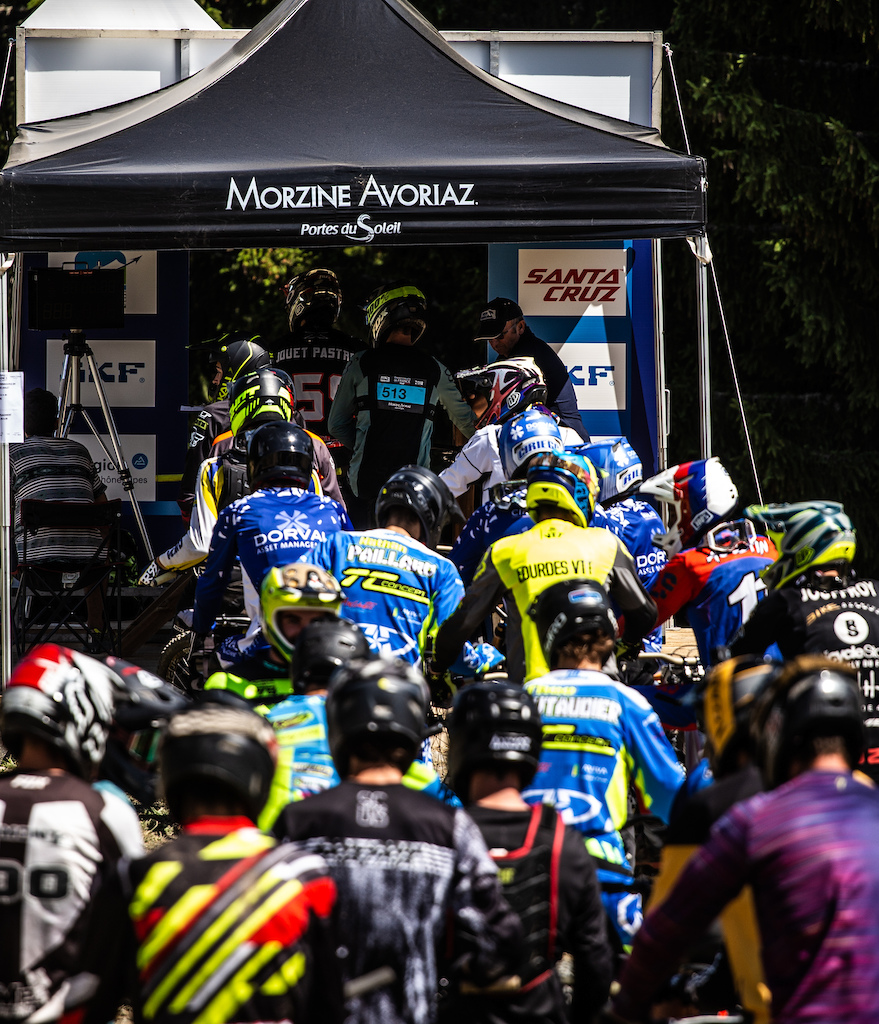 Riders queuing up for their seeding run
On the eve of race day, news dropped that the entire day's schedule would be moved forward. Thunderstorms rolled in early morning, though at 8h blue skies appeared, it was only fleeting and once again the heavens opened midway through finals. 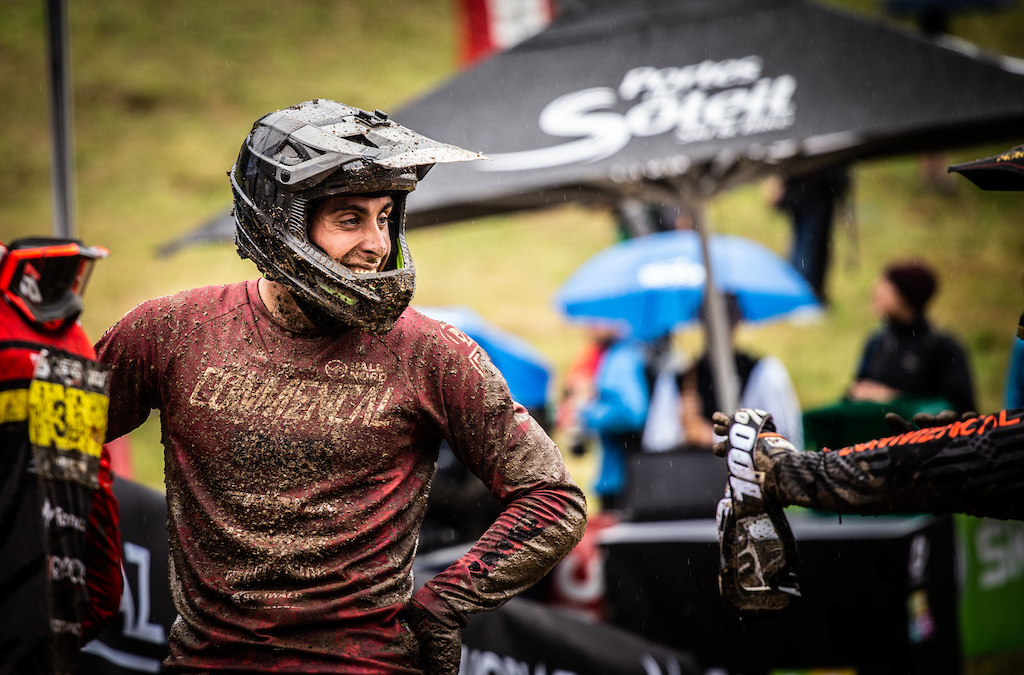 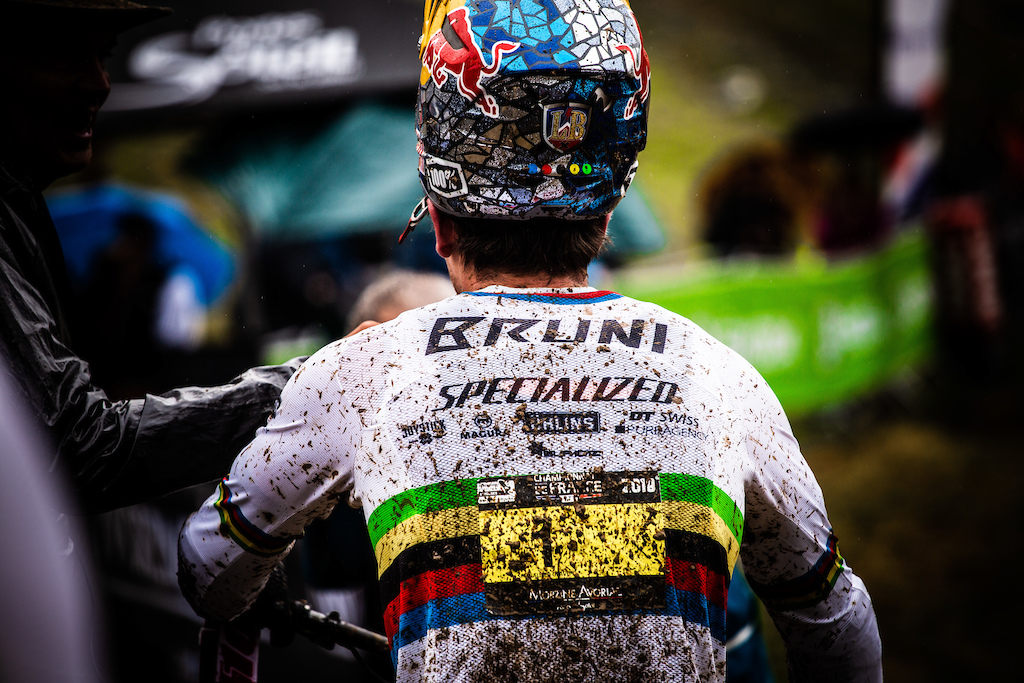 The top World Cup Men had the worst of the conditions
In the women's race it was a surprise winner in Fiona Ourdouillie with a time of 4:29.62, over 18 seconds up on second place Adelina Fontaine, with pre-race favourite Myriam Nicole in third.

Young Scott pinner Gaëtan Vige, set the early pace in the men's field, with a time of 3.14.57, less than 20 seconds back on Pierron's winning seeding time, in far trickier conditions, wet but still with some grip.

It was a time that would hold up as none of the French World Cup regulars could get close, Valentin Clement only .10 back and Valentin Chatanay with results they could only have dreamed of in second and third. Florent Payet managed a very respectable 5th.

Amaury Pierron was the only one of the top boys able to get anywhere close at the first split, but he couldn't hold the pace and finished best of the rest, but still over 30 seconds behind the young Vige.

The course had become near enough impossible after the rain eased up, a slop fest better suited to a canoe than a bike!

Where were Amaury, Bruni, and Loris? Full results here.

si-paton (Jul 29, 2018 at 16:56)
The track looked awesome but a polite message to all race organisers and spectators/media, please don't stand on the outside of corners especially on the downside of a track. The UK has already had one fatality which is one too many.

thesharkman (Jul 29, 2018 at 16:24)
Hahaha I love it when articles mistakenly bring up the rare water species "Marine Caribou".

si-paton (Jul 29, 2018 at 16:50)
A venue/resort must apply to the UCi to run a World Cup, the admin fee is around 20k euros. They must then also pay for nearly all of the infrastructure. A venue/resort must decide if it is worth putting on such an event, will they see a return of their investment?

winko (Jul 30, 2018 at 2:48)
@downhere67: Not only uci but pretty much all governing sports organizations (fifa,fia,fis...) require those hefty fees, major difference is that those sports are huge compared to mountinbiking which is relatively niche and does not attract huge sponsors... We all see EWS as a prime example of how world tour should look like, don't see anybody doing something similar for the dh in foreseeable future tho...

mtbbeds (Jul 29, 2018 at 23:59)
The track will be open to the public to ride for the rest of the season we believe with a small diversion around the wooden gap in the woods as its private farmland before the lower red section. As for a WC we think 2020 is on the cards. 2019 is also possible!

Roguee (Jul 29, 2018 at 16:34)
Came dowm some nice naturals to the right of Pleney Black before joining onto Pleney Red via a freshly cut section... then another fresh section before the grassy finish

Joe27 (Jul 29, 2018 at 17:04)
Too big of a risk for the big guns, especially with the greasy track and with the rest of the WC Season still up for grabs! Big up to Vige for getting first place though!


Is that name real? Love it.