Love my food and love my drink

$40 GBP
Had this helmet for a couple of years but it's only been used on two biking holidays. Large 60-62cm, black, comes with the GoPro mount. I've not had any big crashes in it and it doesn't have any big chips or marks. 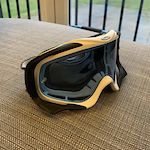 $20 GBP
Had these for a few years but they haven't had a huge amount of use. White frames with some blue lenses. The lenses are in goos condition. I can post for £5. 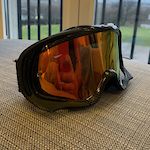 $20 GBP
Had these for a few years but they haven't had a huge amount of use. Black carbon frames with some iridium lenses. The lenses are a bit scratched but replacements only cost £5-15. I can post for £5. 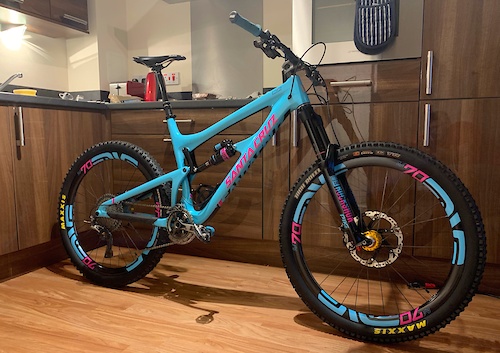 $2700 GBP
Due to a change in circumstances, I'm regretably having to sell my pride and joy. I bought this bike 3 years ago from Elevation Cycles in Linlithgow and it's been well maintained by myself and the local bike shop ever since. Unfortunately it hasn't had much use over the last 18 months due to work and injury which is another reason for selling. The frame was installed with Invisiframe tape since new and only has a couple of small marks from cable rub where the frame wasn't covered. The forks, shock, brakes and front wheel were replaced last year, seat post was serviced a couple of months ago (not ridden it since) and the rear wheel had a full service about a year ago. The BB feels smooth as do the frame bearings. Bad points. The Invisiframe has got marks on it and has gone a bit brown on some small edges. The handlebars have some small scuffs. And the chain and cassette aren't slipping but may need replacing some time in the future as they've been on there since I bought the bike. I can say, without a doubt, that this is still my dream bike and I'll be very sad to see it go. It climbs brilliantly and is noticeably better than my old Banshee Rune and Canyon Strive. This is in part due to the carbon wheels and weight of only 13.4kg (29.5lbs), which is very good considering it's a XL frame with 160mm of travel! Amazingly it also descends like a DH bike thanks to the brilliant VPP linkage system and long travel. At 6ft 2" the geometry spot on and I'm confident that it would easily suit anyone between 5ft 11" and 6ft 6". Frame – Santa Cruz Nomad in XL. 160mm rear travel. 27.5” wheels. Invisiframe already installed. Forks – RockShox Pike RCT3 Solo Air, 160mm travel Shock – RockShox Monarch RC3 Brakes – Hope E4 Front and Rear Brake Discs – Shimano XT 203mm front, 180mm rear Seat Post – RockShox Reverb (Gen 2), 150mm Bash Guard / Chain Device – Gamut Trail SXR BB – Shimano XTR SM-BB93. Bearings still feel smooth. Cassette – Shimano XT 11-speed, 11-46t Shifter – Shimano XTR Derailleur – Shimano XTR 11-speed. Clutch works perfectly and no signs of big hits to the body. Cranks - Shimano XTR. Also fitted with Race Face crank boots. Rims – Enve 27.5” Carbon Wheels. Front rim was new last year. New decals also fitted last year. Hubs – Chris King Hubs in Gold. Front was replaced last year and rear was services at the same time. Tyres – Maxxis High Roller 2.4” 3C front tyre with 80% tread left. Maxxis Minion SS 2.3” rear tyre with 70% tread left. Currently tubeless. Saddle – Burgtec “The Cloud” Stem – Gamut Cillos 40mm. Carbon fibre Enve topcap and carbon fibre spacers. Handle Bars – Enve DH, 800mm wide Headset – Hope Headset Pedals – Shimano M350 SPD pedals. I'm based in the Edinburgh area but I can drive it to you if you're fairly locally. I will be travelling to and from London in the next few months and could potentially deliver it that way if it's not a massive detour. I can also have it posted if the buyer is willing to pay for postage and is okay with bank transfers.