Fueled by adrenaline and caffeine I accomplish tomorrow's goals yesterday! 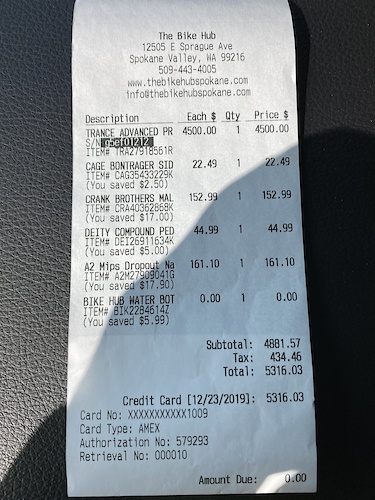 $160 USD
New, was bought for a Kenevo, was too tall for frame. Installed and then uninstalled same day. Hose uncut, all parts and box.

$2600 USD
I am letting it go, my favorite bike... I have too many in the garage and the Nomad has been ridden the least. That's what you get when you buy all the specialized bikes... the Swiss Army Knife just sits there... looking awesome. Mechanic Owned. Custom Build: > Rare Black-Out Matte Factory Color > Complete Matte Frame Wrap Since New (has some dings and scratches in the film, see below for more info) > Santa Cruz Nomad Carbon (it is the CC before there was two versions, labeled C on the top tube) > Industry Nine Custom built Grade Wheels (spin True, Tubless) > Cane Creek DB Air XL > RockShox Lyrik 180mm > RockShox Reverb Stealth Dropper > Maxxis Minion DHF and DHR > Shimano Saints, 203 Ice Tech Rotors > Cane Creek 110 Headset > Custom Graphics > XX1 Cranks and Chain > Spank Oozy Peddles > SRAM GX Shifter, Derailleur and Cassette > Specialized Bar and Stem > Sensus Grips > Mosh Guard Front Fender Included is a bunch of "Extras", Brake Pads, Spokes, Derailleur Hanger, Rotors... The frame has a few marks/scratches on the film, looks way worse in the pictures than in real life... It is most likely the age of the film, maybe time for a re-wrap? That is if it bothers you that much? I took pix of the noticeable scratch/dings. The only actual frame damage is a frame scratch under the top tube protective tape (the pic of the top tube), when I first got the bike I was shuttling with other bikes and a leaver rubbed on the frame causing a scratch pock. I put on the leather frame guard to stop that from happening again. Also, under the bottom tube (next pic) there is a wear spot on the protective film from shuttling. And another ding on the fork (next pic) and as expected some of the edges of the film have peeled up and away, I tried to trim a lot of them but there are a few remaining. On everything else, there are the normal wear/scratches you'd expect for a 2015 bike. Other than that, the bike is in a well maintained and ready to ride condition. Really a shame I have to sell it... PayPal (with fee, add 3%) and FB Payments are OK, I have a box to ship it in, Bike Flights at your cost.