All Trails are Indigenous


by plucas-catalyst
Views: 1,123    Faves: 6    Comments: 0
All Trails are Indigenous. Revealed by the footpaths of deer as they cross the land looking for food or shelter, the ancient trading paths of Indigenous cultures, or built by mountain bike enthusiasts with an eye for a great line or descent. They are indigenous in that they are an expression of the form and pulse of the land. Revealing and travelling along a trail connects us to a specific place; they are an expression of relationships between people and the land.

In the latest installment of the Riding Turtle Island series, a collaborative project between Tree Meter Productions and the Aboriginal Youth Mountain Program, we meet Tom Eustache and his nephew Leon Eustache. Both men are avid mountain bikers and trail builders from the Simpcw First Nation, a Secwepemc community located in the North Thompson River Valley just north of Barriere and approximately 80km northeast of Kamloops. 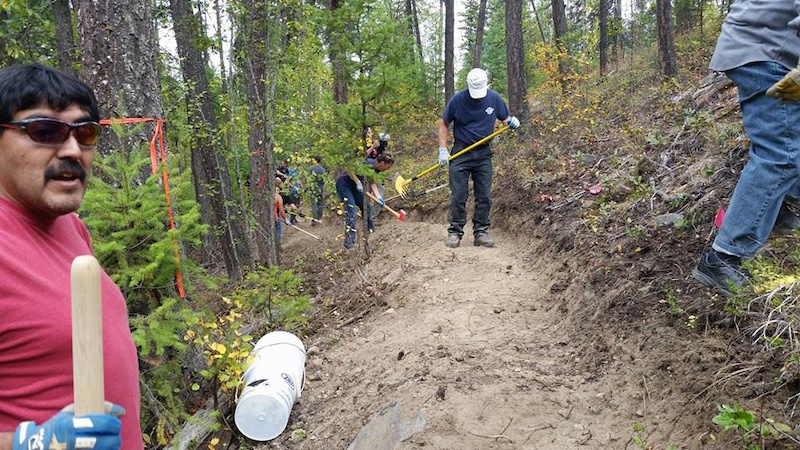 As a councillor for the Simpcw Nation, Tom strongly believes there is a need for more recreational opportunities for his people and for the youth in particular. In previous years, the community built a network of hiking trails in the forests on a ridge above the band office, but they had fallen into disrepair and disuse. Tom, who had raised his own children to become passionate riders, believed that riding could be a means for engaging the youth and inspiring his people to get outdoors, reconnect with nature and the land, and live healthy, active lives.

Over the next several years, the two men worked together to clear and rebuild the trails into a network of trails crisscrossing the ridge providing a diverse mix of fast and flowy trails that started getting the attention of people in and outside the community. In the summer of 2014 Martin Littlejohn, from the Western Canada Mountain Bike Tourism Association (MBTA), first visited the community on a tip from a colleague. He was immediately impressed by what he found. Taken on a ride by Tom and Leon, he could feel their passion and pride as they guided him out on the trails. “The trails were rough but fun. They were teaching themselves to build and they clearly had the passion and the drive.”

“Every day we’re not working or riding, we’re out building trail.” Tom stated with conviction. Martin knew he had found something special. Partnering with the Aboriginal Youth Mountain Bike Program, the Simpcw Nation and the MBTA initiated the McBride to Barriere Mountain Bike Tourism & Recreation Project. The goal of the project is to work with the communities throughout the region to develop a plan to support trails and recreation and to identify strategies for the Simpcw Nation to take on a leadership role in the mountain bike sector. The goal is to develop a model for development that will serve as a source of inspiration and best practices throughout the province.

All of this culminated in a two-day trail building workshop hosted by the Simpcw Nation and led by Mark Wood from the NSMBA North Shore Trail Builders Academy. The workshop included people from throughout the region and from as far away as Valemount and Vancouver, as well as members from other First Nation communities including the Adams Lake and Nisconlith Bands. 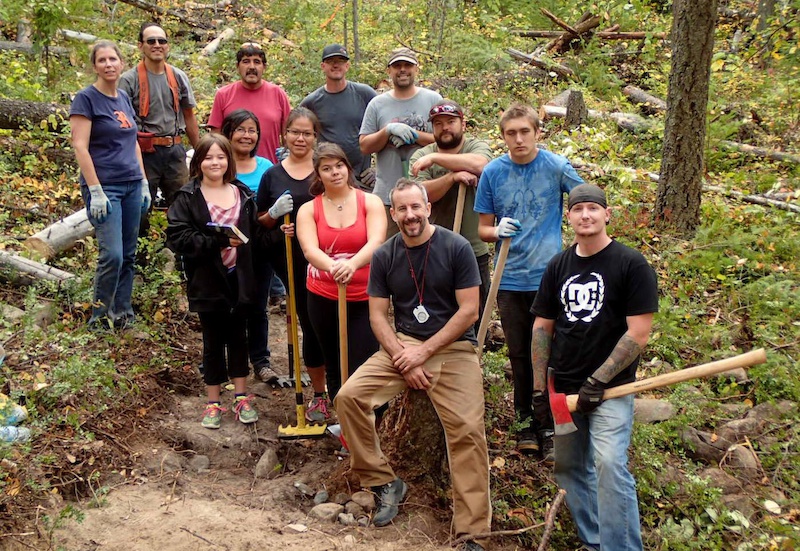 For Tom, the most important element of the project is the opportunity to develop new friendships and understanding. You can hear the excitement in his voice and see the passion on his face as he talks about how the trail projects have brought people together “All of us working here, we all get together and we all have a common goal of building something. You can hear the laughter in the trees. We all have something in common. I can go talk to anyone of those people that I probably didn’t know much about but we can sit and talk and that’s pretty neat.”

For Leon, the trails and mountain biking is about understanding cultural and spiritual connections to the land. “It’s the healing properties of nature that we try to promote all the time. When I bring people out on the land I explain all the different plants out here so that they get an understanding of what we used to heal ourselves. So there’s not just a mental part, but a physical part.” As the trails have grown, Tom has seen a growing number of people out and moving about. “People are excited. We’ve even got a new running club in the community. People keep asking when we’re going to have another workshop, when we’re going to build more trails.”

Across Canada, people are grappling with what reconciliation means or what it looks like to them and what they can do to support their community. For Tom and Leon, watching their family and friends working alongside people who have come from all around the province, throwing dirt, cutting and digging, discussing routes and descents; singing and drumming to bless the completion of a trail that follows the ancient footpaths of their ancestors, and then leading a group ride down through the trees, everyone together; they’re developing a model that points a possible way forward for all of us.

werkinit (Mar 22, 2016 at 13:03)
Although we have ignored or forgotten this for a very long time. We are all treaty people. Cool stuff happening here.

cuscocanuck (Mar 22, 2016 at 19:53)
Thank you PB for posting this. A very significant video on numerous fronts. I may need to reconsider my riding trips for this coming summer. I suspect ridiculous amounts of deet will be required to ride this corridor.

plucas-catalyst (Mar 22, 2016 at 11:09)
Hi, you can follow the project for riding events or reach out to the community through the project Facebook page: www.facebook.com/simpcwmountainbiking

DylanDaSilva (Mar 22, 2016 at 8:32)
Great work guys, it's awesome to see a decent scene forming there! After watching that Revel video, that cinematography looked like trash. And the voice other was really too much for me it just spewed bullshit.
Post a Comment