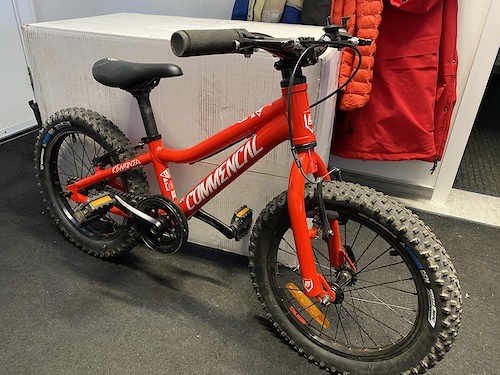 $300 CAD
It’s in great shape. 16” wheels; the next step after a run bike. Look on the Commencal website and you’ll see you’re saving yourself a couple hundred bucks. Why pay more? And due to covid: good luck getting a new one. 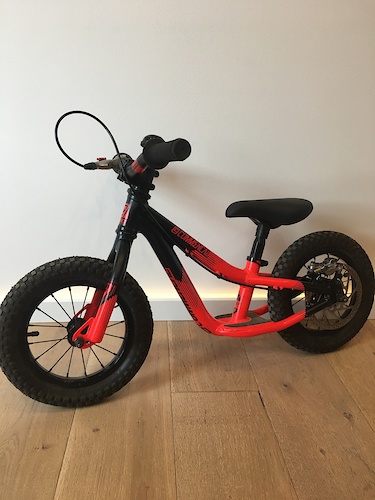 $120 CAD
This thing is beyond rad. Sure, you can go buy a new one for about double the price; but let’s be honest. It won’t be nearly as cool as this one because it doesn’t have a disk brake. It’s a juicy 7; a brake we’ll known for its enormous power. It saved my kids bacon on numerous occasions. My kid was able to bypass that whole coaster brake nonsense and is well on his way to an Ivy League school. Yours could too. With no awkward bribes! And it’s in great shape. Message if ur interested.

$575 CAD
Ok. Remain calm. I know you want to jump in and immediately message me. But seriously: control yourself. It’s like Intense somehow solidified the concept of 100% kick-ass and welded it into 140mm of travel awesomeness. This isn’t just green. It’s candy apple sparking madness. Right now there is an emergency meeting at Apple because this frame has revealed the flaws in their supposedly perfect camera that’s in most of our phones. Its got some mother-F%*!%@^ alternate reality, blizzaro world medusa monsterness going on. It’s so beautiful, it causes stones to turn into people. You will be riding over people. Maybe you jerk boss will be one of them. Hopefully not a baby. Now for the nerd stuff. The frame is in great shape. Look at the geometry online: it has offset bushings that reduce the head angle by 1.5 degrees and drop the BB. I attempted to measure the reach myself: I think it was about 470mm with my high quality fishing rod and tape measure. Throw a 160mm fork on there (which reduces the head angle another degree) and the thing is is actually pretty up to date, aluminum, and way cheaper than most frames. The shock was recently serviced: I think there is a teeny bit of air in there by the sound it makes, but I was assured by the Bow Cycle guys that I’m delusional in this regard. It functions fine when I rode it. I only mention it bescuse I will only settle for the best: like this frame back in 2012. Cane creek tapered headset included. Non-boost 12mm axle. Drilled for stealth sounds somehow inappropriate for those readers under the age of consent; but it’s nonetheless true. I’m hot and bothered just thinking of it. Threaded bb because if you’re the kind of rider that would consider this as your main machine; you know your massive quads would blow an inferior press fit unit right out of the frame as you try to evade the hoards of love mad stalkers who will be following your mullet around if you own this bike. I had to hire Nancy Kerrigan’s bodyguard. It’s been a mess. I know what you’re thinking right now: I (as in you, the reader) am not nearly badass enough for such a killer rig. What I have to say to that is : don’t worry, you’ll never be as good as me (the writer). That’s obvious. You just need to be good enough. This ride will elevate your game from firefly to the white hot intensity of the sun on two wheels. Message me if you’re serious. Cuz I’m dead serious about selling this thing, or my wife will kill me. And if she does, it’s not for sale cuz she knows nothing of how this website works. So u better hurry the f&#~ up.

$975 CAD
Practically pristine. This thing is crazy fast. Full DXR except for the redline hubs. Basically it’s stock with the exception of the bombshell carbon bars. No pedals (if you’re buying it you probably have your own). Absolutely a step above aluminum. 15mm rear axle. My kids stopped racing a few years ago so it’s sat in the garage.I’m not interested in giving it away (don’t bother with lowball offers) cuz I might use it again, or I might not. I won’t respond to people who ask me to ship it: you’ll need to get it in Calgary.
Load more...
8,275 views