$800 EUR
Hi everybody, I have most of an XTR M980 10 speed groupset for sale. All the stuff is brand new and has never been fitted or used. Chain Cassette 11-34 Crankset 170 mm (triple - in order to get the correct chainline when setup as a single ring) XTR bottom bracket Rear Shifter Rear Mech cheer for looking.

$2000 EUR
Hi everybody, I have a brand new set of ENVE M70 30 wheels for sale. These are laced to a set of Hope Pro2 EVO 40 tooth hubs. The wheels have been taped up for tubeless use. Never had tyres fitted to them. I have a set of Magenta decals for them. Cheers for looking.

$2800 EUR
I have for sale, a brand new 2015 Santa Cruz Nomad frame with an upgraded 2016 Fox Float X EVOL shock. This frame has never been built. Selling as I haven't had the time to build it thus not having the time to ride it even if I did build it. If I get my asking price I will include a brand new Chris King headset and bottom bracket with the sale. There isn't much else to say about this frame, other than it will build into a fantastic bike. If you have any questions please don't hesitate to contact me. Cheers for looking.

$2500 EUR
For sale is a Turner DHR that was raced for a year from brand new in 2009. As a result of an accident in late 2009 I was in recovery for nearly 18 months and during that time I never got back to my beloved DHR. Time slowly went by. I fully rebuilt the bike in 2012 in the hope that I would ride it again. This never happened. So this bike is as good as new and has seen very little use. I haven't ridden it since the end of 2009 and it has been kept in storage since then. It really is a waste of what is still a very capable and amazing downhill bike. It is time for it to be sold. It is incredibly well specced. The build list is as follows. 2010 Fox 40 RC2 with Titanium springs 2012 Fox DHX 5.0 with Titanium spiring 350 x 3.00 Sunline V1 handlebars and direct mount stem Shimano Saint M810 Brakes with goodridge hoses Shimano Saint Cranks, polished, with a Gamut P30 chainguide and a 36 tooth chainring Hope ceramic bearing bottom bracket Hope headset Hope seatclamp Thomson Elite seatpost WTB Silverado, Ti rail saddle SRAM X-0 shifter. 9-speed SRAM X-9 rear mech 9 speed Ultegra cassette, 11-25 Handbuilt wheelset, Shimano Saint M810 hubs paired to Mavic EX 721 front rim and a Mavic EX 823 rear rim. Built with DT Swiss Champion spokes, and Pro-lock nipples. Shimano XT Centrelock 203 mm rotors front and rear. Everything is in immaculate condition. Pictures are attached. IF full asking price is paid, I will sell the bike with a spare set of Syncros wheels, with discs and three sets of brand new tyres. Grab yourself a bit of mountain biking history and a bargain. This is a fantastic bike for the money. Thanks for looking.

The first track is - Where the wild things are by Moon & Sun. Not sure about the second track though.
Load more... 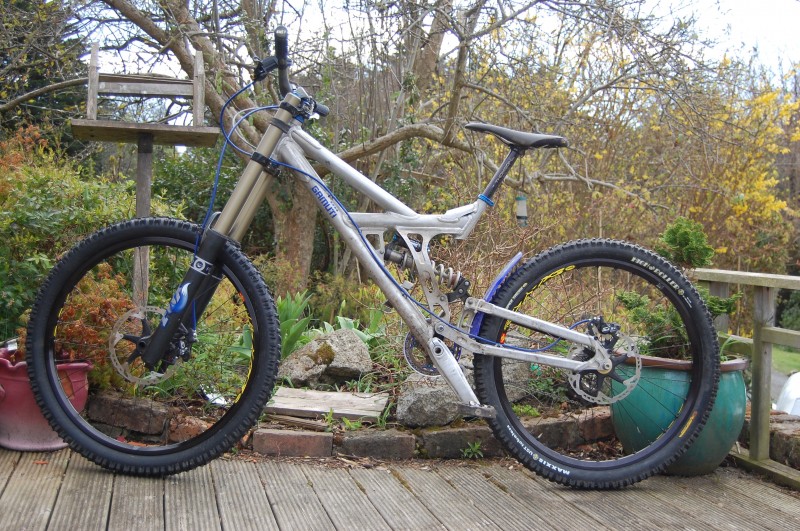