Making our own DIY Cable Cam

Join Pinkbike  Login
48 Comments
This post gives you an insight into how we made our DIY cable cam and the end video results. It was all filmed on The Beast in the Peak District using a Panasonic GH1 DSLR.A cable cam is something we’ve been toying with as an idea for shots in our next mountain biking film that is currently in development. There’s two key elements to a cable cam. The rope/cable the camera runs on and the unit holding the camera. Our first choice of cable or rope was decided for us. Coming from a climbing background we had plenty of rope and kit to get it reasonably tense so we decided on 10mm semi static rope as our ‘cable’. The major issue for us was the design and build of the unit. I had seen a really good version on the web so decided to pretty much copy it. 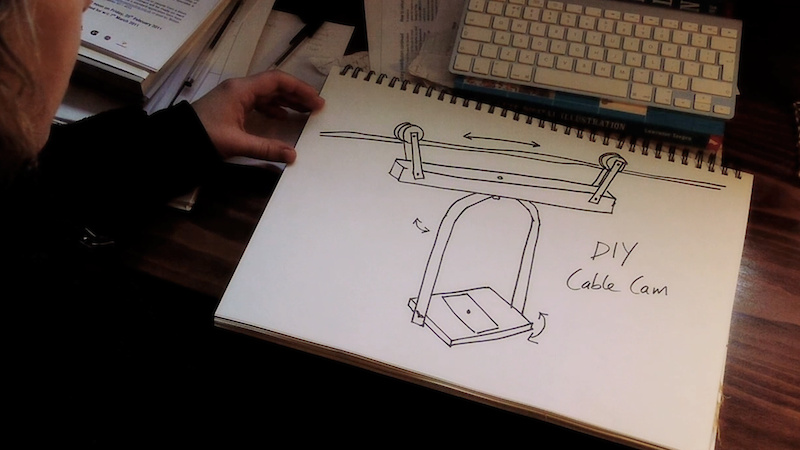 We selected some heavy duty aluminium box section, found in H’s Dad’s shed. (We saw some steel or Aluminium box section in B&Q which would have been fine.) Cutting the box section to length was easily done, we cut it at about 75cm. The frame for the camera to sit in was made by bending the drilled steel plate to make a squared off U shape. The tilting plate for the camera was made using a cut to shape section of plywood and the corner brackets from B&Q screwed together. These all bolted together with some M6 threaded bolts cut to size and butterfly nuts. The thought then was to use cord to attach the pulleys to the box section once the cable was in place. This was all bought and cobbled together in about 4 hours on a Sunday afternoon. 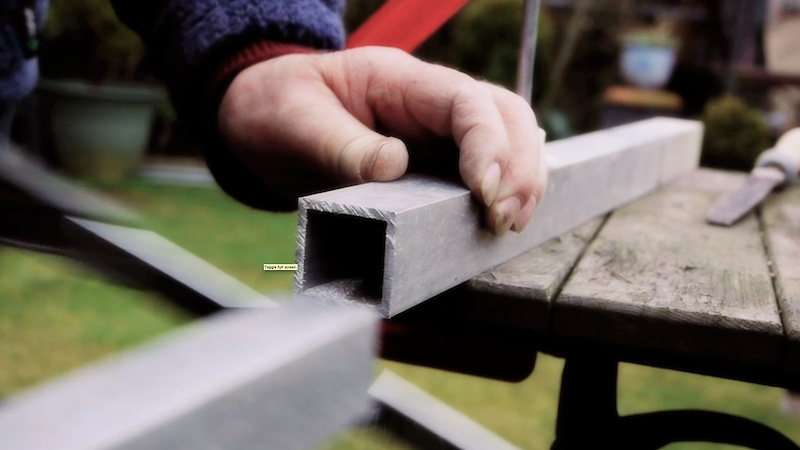 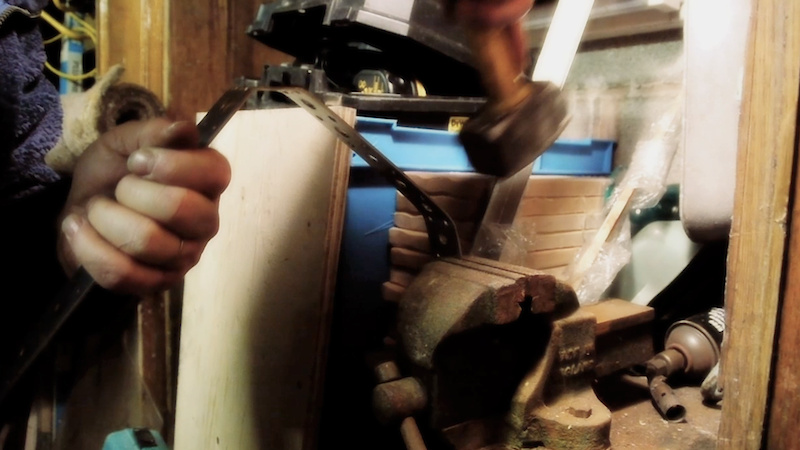 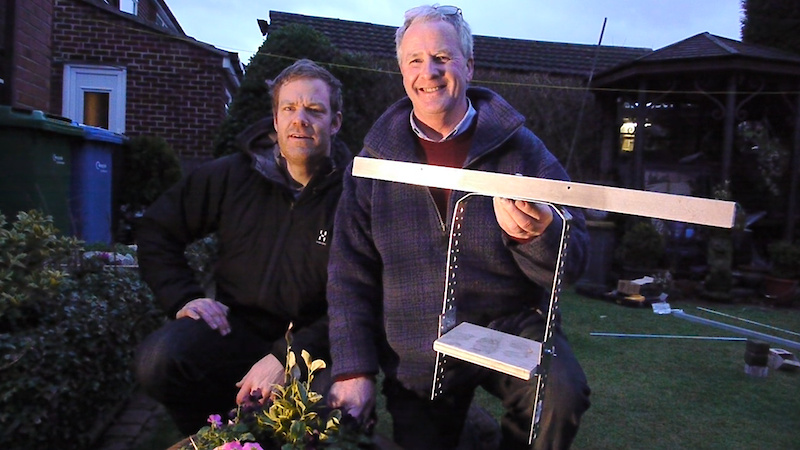 The first version used Petzl fixed pulleys, but these are too heavy duty and not free running enough. The second version, 2.0, used the wheels from some half decent rollerblades we picked up at a bargain price. 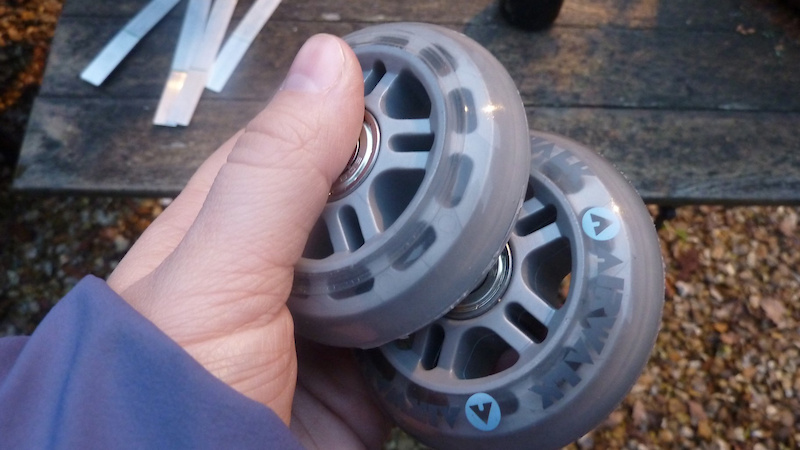 They had some very smooth ABEC 5 bearings in them. We cut some aluminium bar into 4 equal sections and gave them a slight flare to take into account the additional width of two wheels side by side compared to the width of the box section. We drilled holes at either end and then bolted the plate to the box section and the wheels with appropriate spacers to the aluminium plate. Very smooth rolling with no discernible vibration. 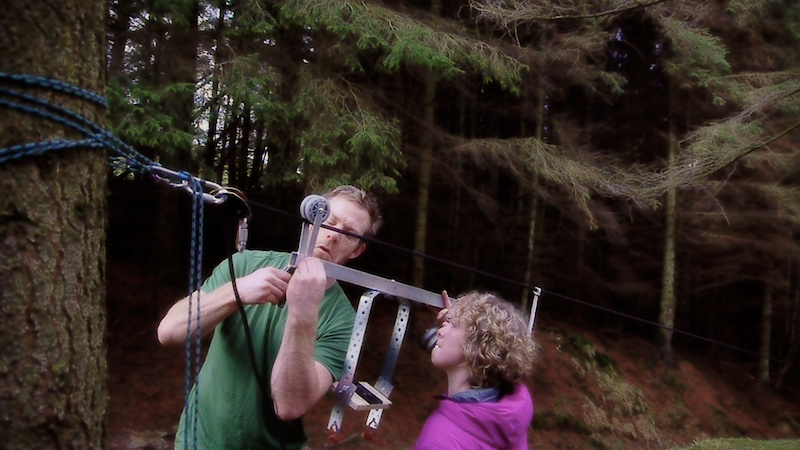 The rope we used was a semi static rope bought in a climbing shop, a bunch of climbing slings and screwgates. The major piece of kit that does all the work was a Petzl protraxion, essentially a pulley+locking mechanism. Attach rope at desired trees using slings then tension at one end using protraxion and a lot of grunt power. Attach cable cam to tensioned rope and get ready to film.

Stuff we learned:
1) Choose a very slick wheel/pulley, the less rolling resistance the better. We used a set of rollerblade wheels with good quality ABEC 5 bearings in. £79.99 new. On sale for £25, bargain.

2) A camera keeper for when you are setting up shots – ie a tether for the camera so it can’t go sliding down the rope accidentally.

Here's a selection of screen shots taken from the Cable Cam footage and a short 3 minute video of how we created the Cable Cam and testing it out on The Beast in The Peak District: 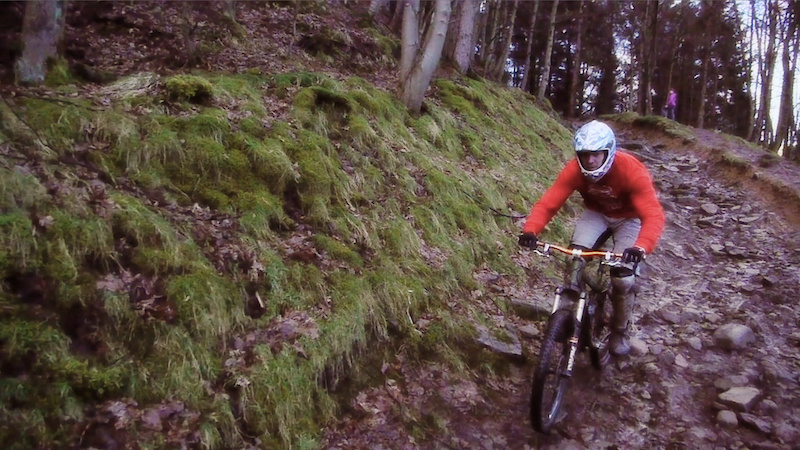 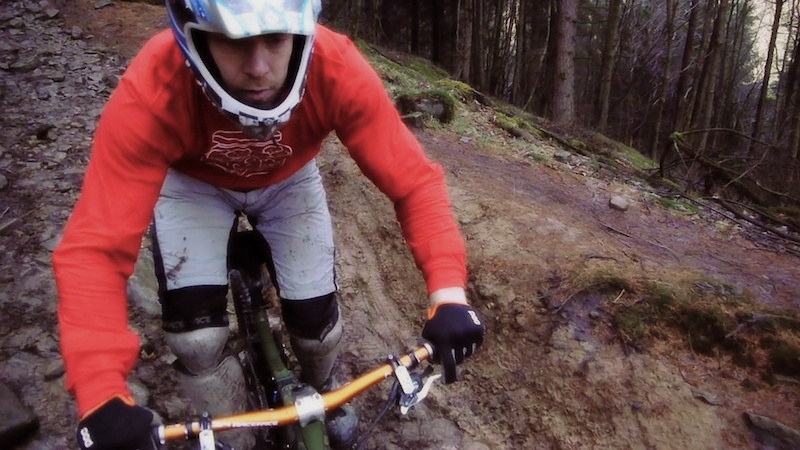 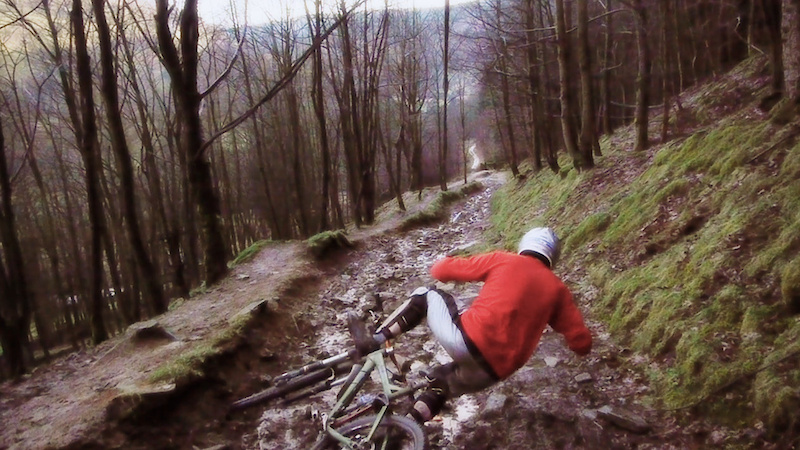 nhrider44 (Mar 15, 2011 at 3:51)
Coming from a rope rescue background, it't important to learn a knot to reduce the rope tension once you are ready to break down the system or else you may not be able to get the rope untied and have to resort to cutting it. If this is something you're interested in, google either the Load Releasing Hitch or the Munter Mule and use that with a prussik beyond your anchor tree. This is a cheap alternative to spending over 100 dollars on a piece of climbing hardware you may never actually need. Also, simple machanical advantage systems like a 3:1 system can make life much easier. See this diagram:
www.brrr.ws/docs/Boat_Rescue_Haul_Systems_files/image004.jpg

sailing blocks(pulleys) are alot cheaper than roller blades and roll just as fast too.

nhrider44 (Mar 16, 2011 at 4:08)
You've got a good point, I'm just thinking that spending an extra 20 bucks and buy some carabiners is cheaper than having to replace your rope much sooner from sheath damage from it rubbing against other rope. I don't know sailing systems well though and you may have a great idea that doesn't prematurely wear on rope. I'll never underestimate sailor's cleverness.

cheetaprowlerdh (Mar 15, 2011 at 0:16)
Looks like exactly what I had in mind for building mine except I was planning in using some 1/8'' steel cable... But climbing rope is way lighter and holds just as much, good idea.
Thanks for the inspiration guys, keep up the good work.

maiamedia (Mar 15, 2011 at 2:50)
Cheers! Yeah, climbing rope worked really well adn with the added help of the Petzel Protraxion we could get the rope very tight.

adrenalinaddict (Mar 15, 2011 at 5:22)
Cheaper yes, better no. Your clip illustrates one of the issues with K'nex cable cams, they are to light and the sway. They also can’t support heavy weights. If you are on a budget, Mechano is the best option, but nothing beats a purpose built cable cam.

cheetaprowlerdh (Mar 15, 2011 at 7:25)
To prevent sway I either use an 8lb barbell on the bottom of the car and four rollers, or just set up two cables with two sets of rollers to counter lateral sway... The system I designed had me on one end of the cable with nylon rope attached to the car to help brake it both before the end and near turns. I tested it once and it looked plenty smooth, with extra thanks to the IS in my camera, but I could have gotten away without it. Kinda bummed I had to leave it in California when I moved, it wouldn't fit on the plane, lol. The more expensive rigs are purpose-built and very well designed, but the costs are through the roof for amateur filmmakers... With enough determination and practice one can get pro-quality results out of a homemade rig.

nouser (Mar 15, 2011 at 13:24)
Yeh haha only cheaper, far from better but just easy to knock together thats all. and to be fair its not bad usually, that one with it swaying really was an exceptionally windy day, really bad idea getting it out. In my experience its too much work for the shot you get in the end, takes countless gos, takes forever to set up/get speed and timing right, you can neg prop all you want but until you've tried it you don't realize how much of a bitch it is to get right. Here's our best result, annoyingly i think it was the first shot we took, just got worse after and we ended up giving in. - www.pinkbike.com/video/135409

adrenalinaddict (Mar 15, 2011 at 14:25)
I have made K'nex ones in the past, and they do come out reasonably good, although still shaky! - I used to use elastic bands to reduce the sway and load them as much as I felt they could hold to reduce sway in the other axis

- However they aren’t as good as a Mechano or purpose built one, but that may be because I have had more experience with them by then?

maiamedia (Mar 15, 2011 at 2:44)
There were towels at the end so perhaps another solution is needed. The camera was fine though.

joecavell (Mar 15, 2011 at 6:42)
you dont have to have the arms connecting the pulley to the frame. We used the sketch as a basic plan to our cable cam. we connected a "timber" frame to the pulleys, and we didn't bend the metal as it is hard to get exactly even, instead you can just bend the metal carrier or twist them, to make a triangle, then connect that to a vinyl screw. it soo much easier and less expensive. if you want more info and pictures...dash me

rangemaster (Mar 15, 2011 at 10:24)
i got easier way. build it from k'nex (only works for gopro) take the disp;ay plate that the camera came on when in box. tape or glue to the structure. get long ass rope to tie btwn trees. for a brake, mount a towel at the end of the rope. then the camera runs into it it will slow down and won't smash into the tree trunk.
my inspiration: www.pinkbike.com/photo/4607944

ryanharozero (Mar 15, 2011 at 23:01)
ive been wanting to make one the idea and concept seems fairly easy but is there a way to control the actual speed the camera goes down the line?

monkeyorhuman (Mar 15, 2011 at 9:54)
Hi Smike, Your question about the Gri-Gri is an interesting one. I also own a couple but went for the protraxion instead. Question is why. I guess it's because the PT is specifically designed to take large loads for long periods of time, be easy to release and work with semi-static rope. The Gri-Gri is obviously designed to take a load but one that is much lower and I would guess for relatively limited periods of time The climbing rope used with a Gri-Gri is also far stretchier than the semi-static I used on the cable cam so again it's not its intended use. Saying that, if you have no intention of using the gri-gri again I would certainly think about giving it a go. Hope that helps. If you have anymore questions about the rigging I'm more than happy to answer them. I have a few additional ideas about how to make it simpler if you don't have lots of shiny climbing kit hanging around. Cheers Patrick

shadow11 (Mar 15, 2011 at 8:59)
Lots of great DIY filmmaking rigs at dvrebellion.com including a lightweight cable cam for DSLR's

For the cable:
- 10mm semi static rope
- protraxion to add tension
- several karibiners
- slings
- a towel to act as a braking device