I've spent my fair share of time as a visitor in the little Kootenay town of Rossland, British Columbia. In the Winter it boasts one of the most epic ski-hills in North America, with ridiculously deep and steep powder. In the Summer the notoriously outdoorsy inhabitants can be found hiking through the woods, swimming in the lake or taking in all the alpine glory the Seven Summit's bike trail has to offer. The vibe is unquestionably laid back and friendly, and upon arrival all visitors are greeted with hugs and baked goods, or maybe that's just my personal experience, but it's worth putting to the test.

With such a vast quantity of outdoor activities pumping through this town's veins, it only seems fitting that the byproduct would be a few talented individuals being pumped out as well. Mike Hopkins has been traveling the globe first as a professional skiier and then more prominently as a professional mountain biker for the better part of a decade. Despite the glitz and glamour associated with traveling the World on private jets and sipping Dom Perignon out of bejewelled camelback hydration packs (is that accurate Mike?), there's nothing quite like returning to your childhood home and revisiting the places and memories associated with those formative years.

So in I came as a transient cinematographer for the week to shoot both a short profile piece as part of the "Over the Edge" series I'm working on, as well as a teaser for Mike's secret project code-named "Imagination Station" (more on that later). Bruno Long, fresh off his first cover on Powder Magazine's latest issue came out for a portion of the week to get in on some of the action. The theme for the episode was revisitation, so in addition to spending a fleeting hour on top of Seven Summit's, we decided to go back and spend some early morning's on the trail we had previously shot for Mike's "Loam Factory" video, as well as returning to the epic forest he had shot for Life Cycles. 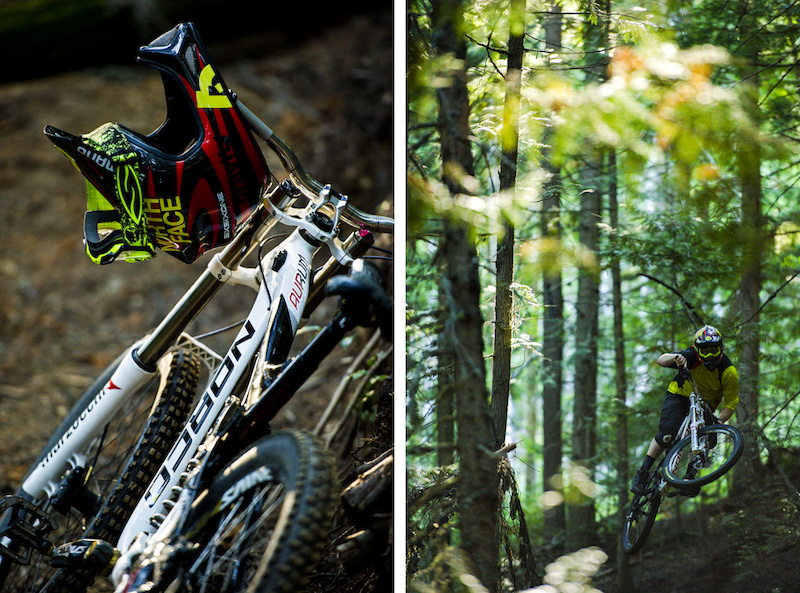 Back to the Factory 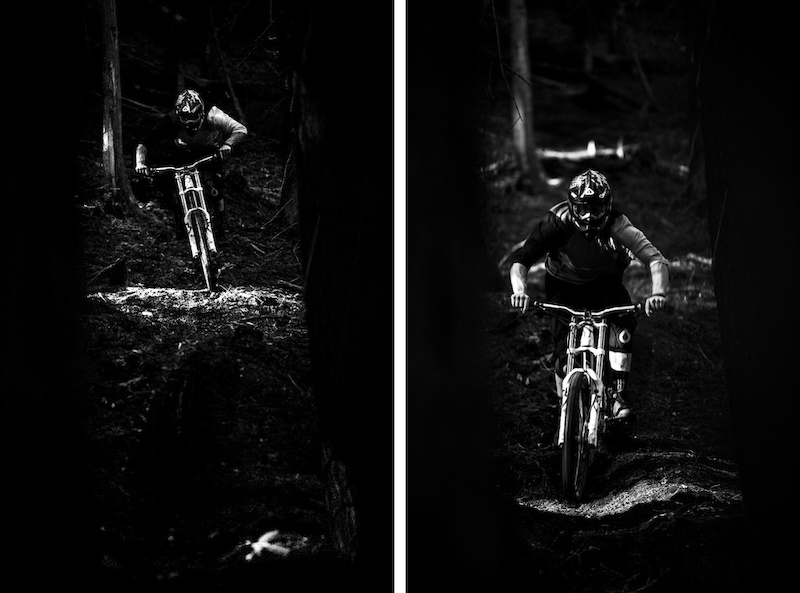 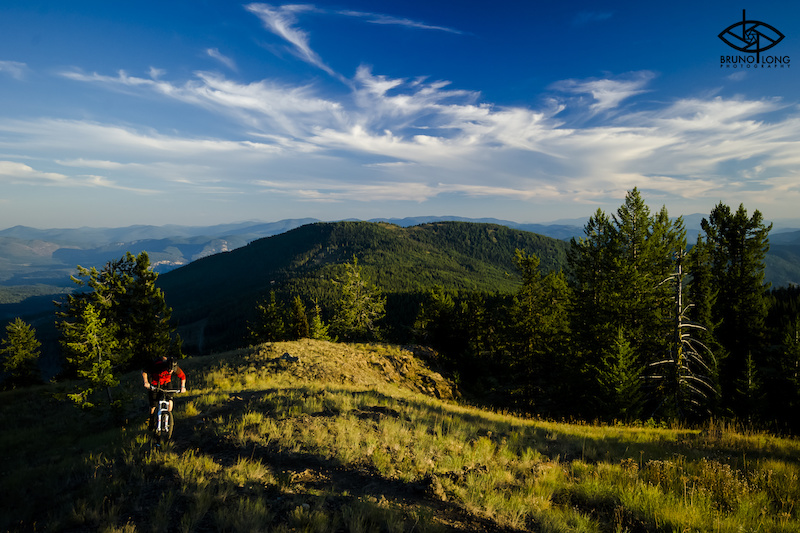 Seven Summits above Rossland, BC provides some bumpin' views, and mosquitoes 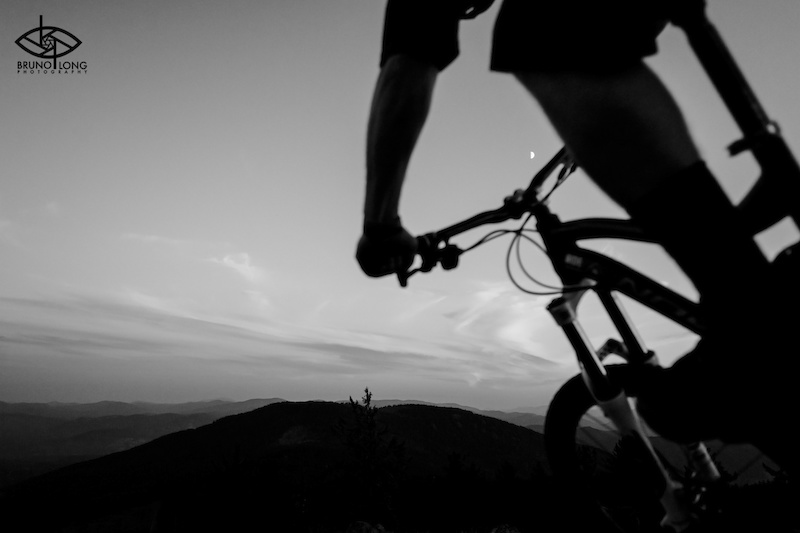 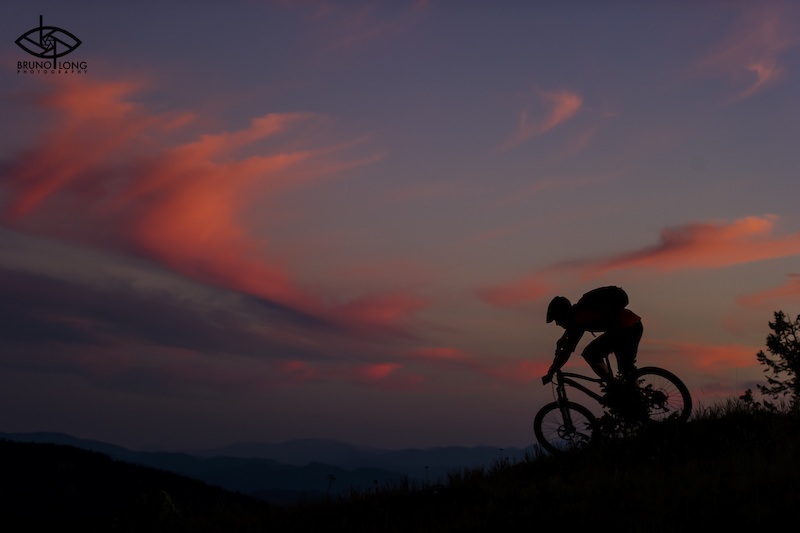 It's been about 4 years since Derek Frankowski and Ryan Gibb shot the opening riding sequence to Life Cycles in this radioactive green zone the guys named "Green Turkey." As we walked through fields and climbed through bushes to get from Mike's truck to the zone, I watched the environment change almost suddenly from the standard Kooteny forest into what seemed like flawless doppleganger for Japan. Although I was told the prime-time for photogenic green vibrance was mid-July, the subtle mid-September transition out of Summer was pumping out some seriously banger colours in its own right. We only had a few hours to get what we could, and despite the picturesque nature of the strip of trail, the biggest trick was trying to avoid poaching the exact angles from the movie. It would basically be a case of walking around a berm for a while, finally seeing something that looked perfect- followed by a sudden realization that I had seen that exact shot somewhere before...
But once we moved past those small hindrences, Mike got busy doing what he does best- absolutely destroying berms- and before anybody interjects about the disrespectful nature of his riding towards those poor corners, in the words of someone somewhere's dad, "I brought you into this world so I can take you out."

Over the next several months on Pinkbike, we'll continue to release more short "Over The Edge" episodes through the EpicTV channel highlighting different riders, locations and stories around BC. Check us out if you'd like to keep up with things:

Words and Video by Liam Mullany
Photos by Bruno Long

nation (Oct 8, 2013 at 13:50)
In a few years, after he puts a few more out, somebody needs to just put them all in sequence so we can watch them like a full length movie. His edits make me want to ride more than anyone else's.

gingy-0 (Oct 7, 2013 at 20:21)
Wasn't there some sort of contest a while back where Mike Hopkins got partnered with Matt Miles and they had to make an edit....When did the results for that come out?

WAddict (Oct 8, 2013 at 3:10)
I liked the music. I think. It seemed to keep building and building....and then I was waiting for a full-tilt rocking song, but it stopped. And then kept going. Good quick edit though. Great riding from a true great.

Kanicula (Oct 8, 2013 at 9:02)
I hope Hopkins will land succesfully his hudge gap he crashed last year at the Rampage. It was so sick !