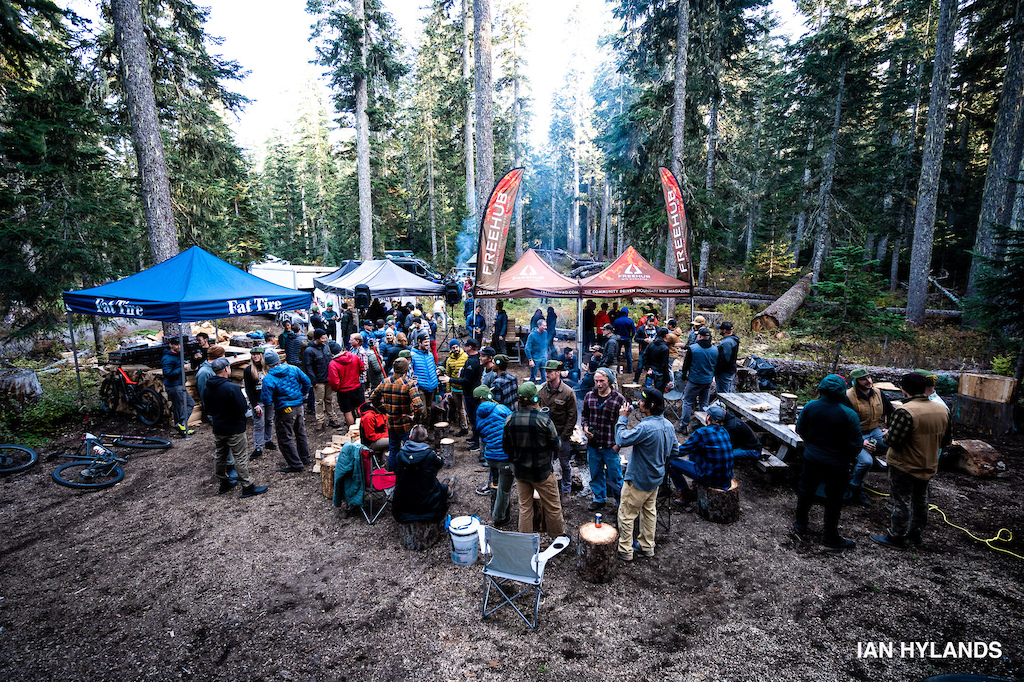 Racers arrived at basecamp on Wednesday and for those who have never experienced a Trans-Cascadia event, they were in for a bit of a surprise. “In my riding scene, I’m a bit of a ride organizer so I’ll bring a barbecue or whatever and get people organized a little bit,” says freerider Matt Hunter, “and I showed up here and I was like, ‘Woah, who did this?’ It was pretty amazing.” Racer tents were set up along the shore of Lake Takhlakh with Mount Adams in the distance, a fire was already lit, and two stocked bars were ready to serve as racers exited their shuttle vans. 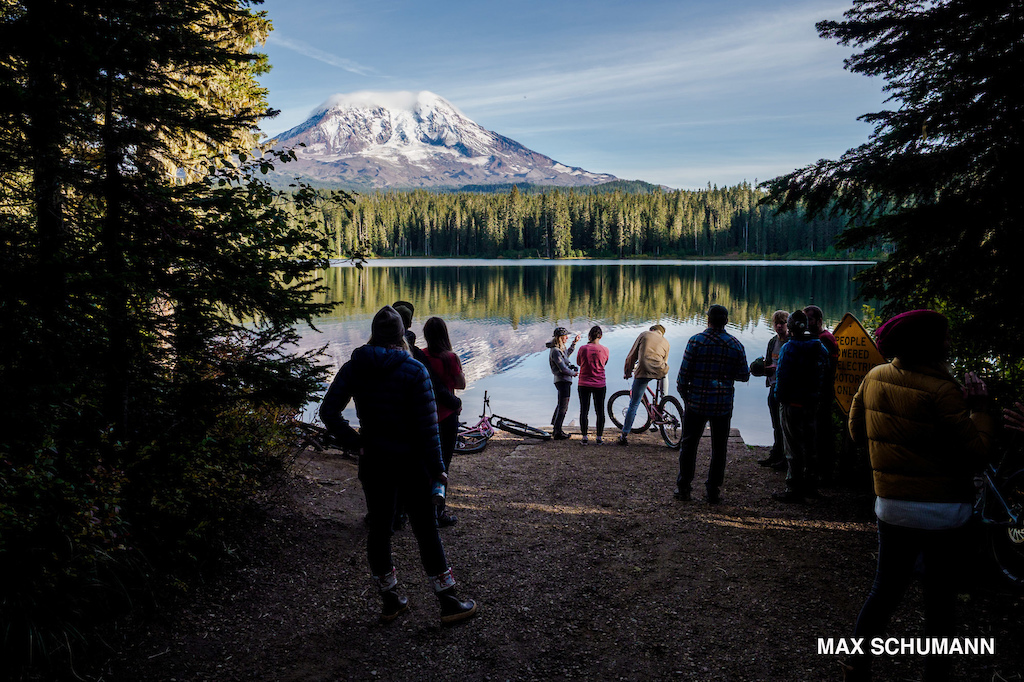 During dinner – barbecue pork rib knuckle with chipotle honey butter cornbread and all the fixings – the Trans-Cascadia team welcomed the racers. “We’re here, we’re in it, it’s deep, this is terrain like I’ve never seen,” announced Race Producer Alex Gardner. “We’ve been out here scaring ourselves since 2013, and I’ve never seen tracks this good. You guys are in for a treat!” 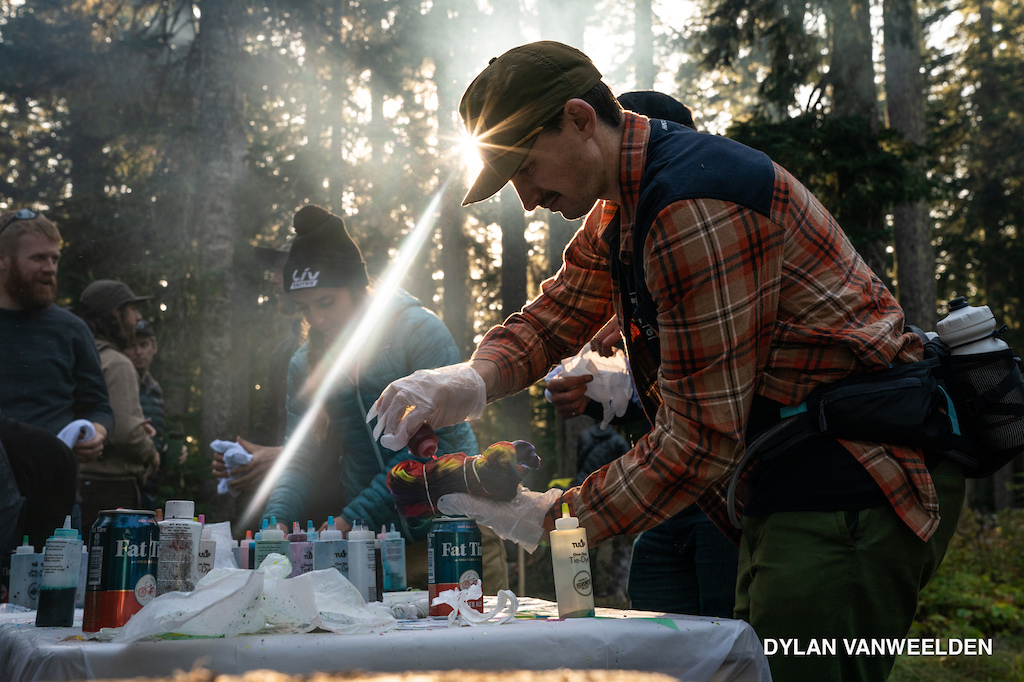 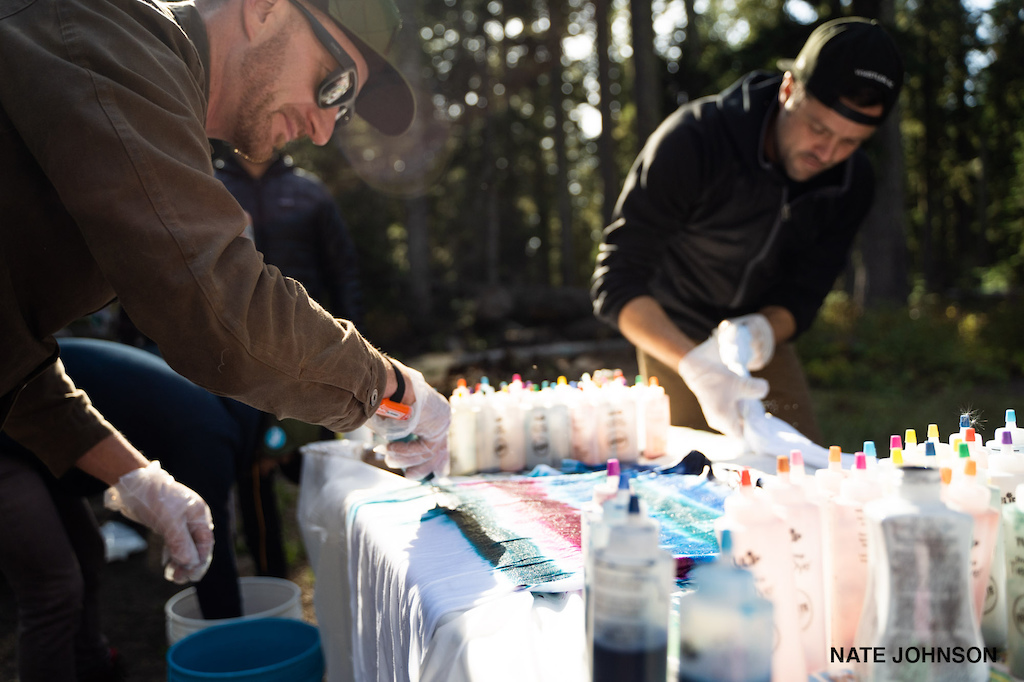 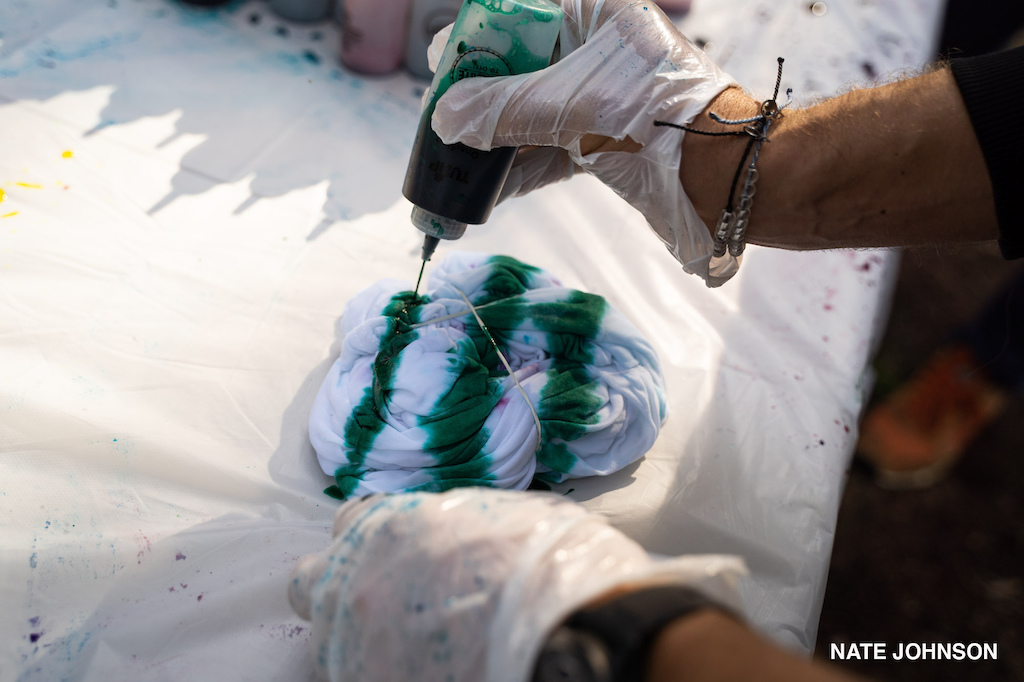 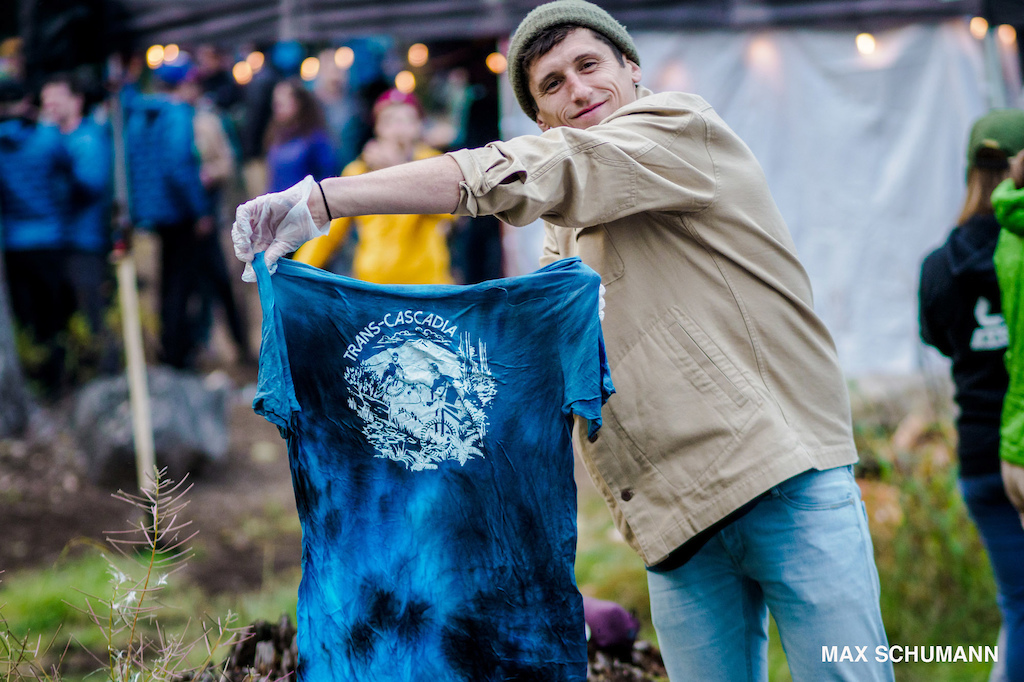 Racers lined up at 8:30 the next morning to hop the shuttle to Stage 1 just as the heavy fog turned to proper rain. Ahead of them was a nearly 20-mile day with 4500 feet of climbing and 7700 feet of descending. Most of their day would be spent high up on a cold ridge line but marshals and timers all had fires lit and to keep them warm as they moved through the four stages. 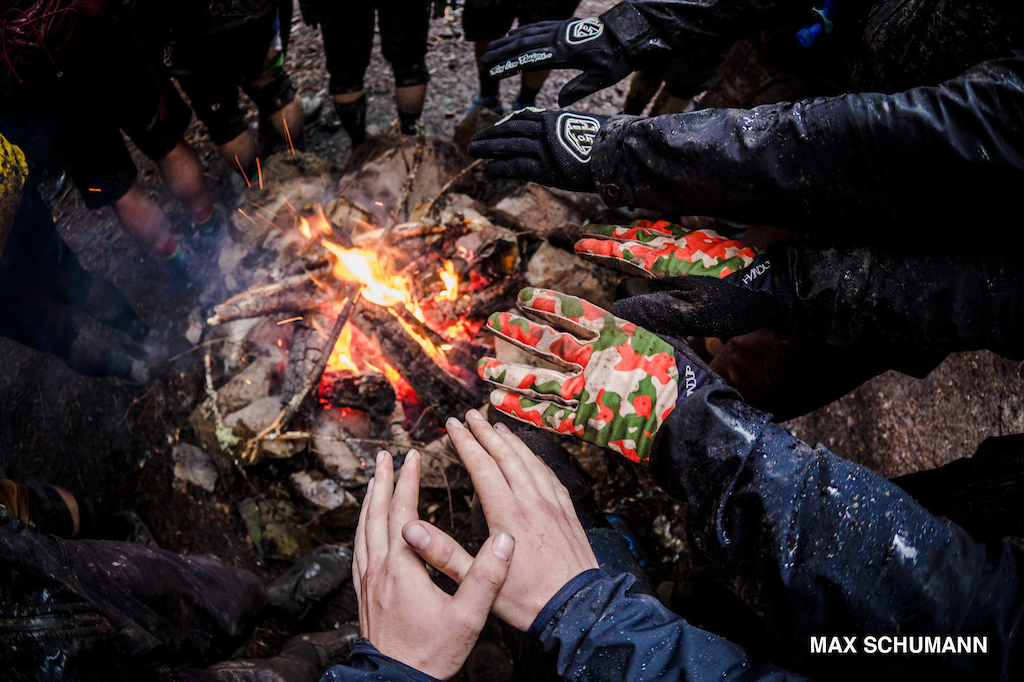 EWS racer Christina Chapetta is no stranger to enduros but this is her first Trans-Cascadia and her first race back from injury, “I’m just really stoked to ride and to end the season on a good, fun note. For me it’s not all about the racing, it’s just good to be back on the bike – and with a good crew of people.” When asked about any advice she got coming into the race, she said “[I was told] to get the liver ready, get the lungs ready, there’s going to be some biking involved – and bring rain gear.” 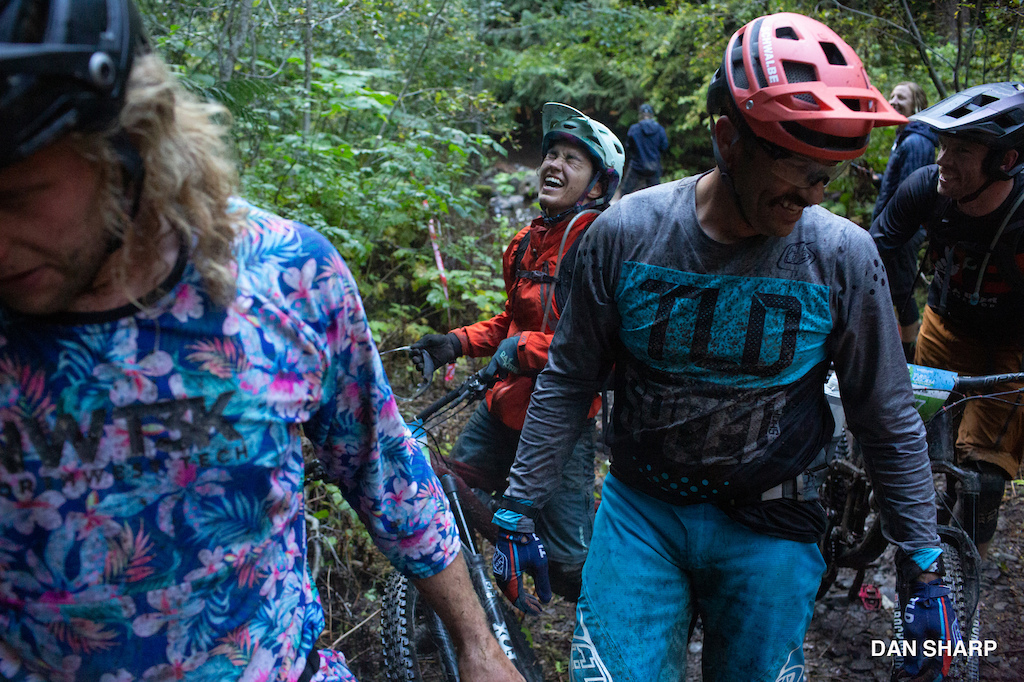 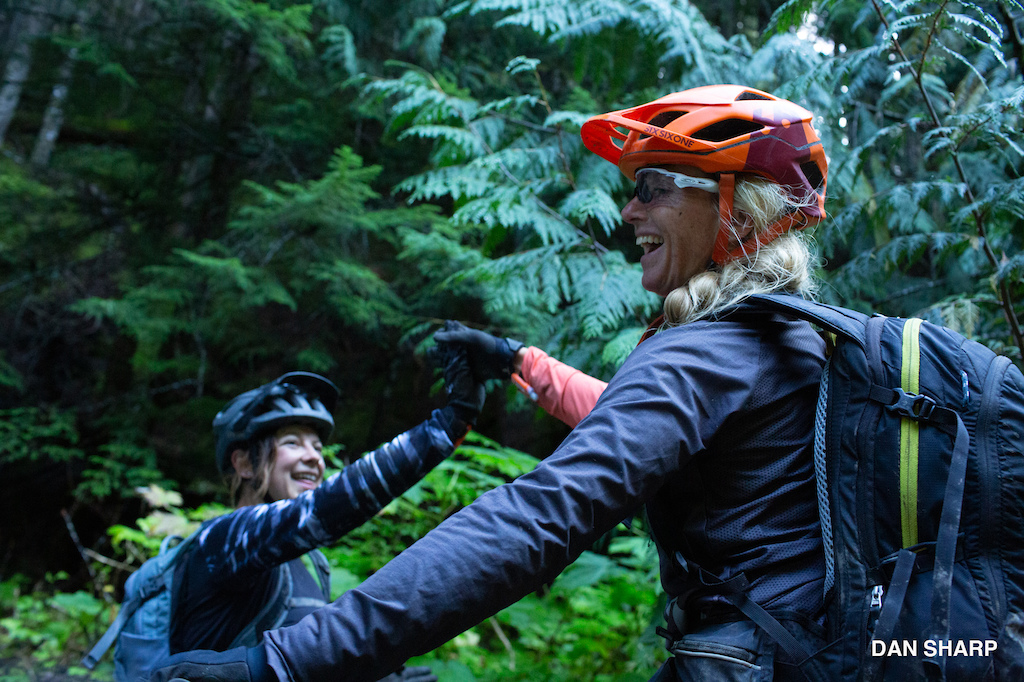 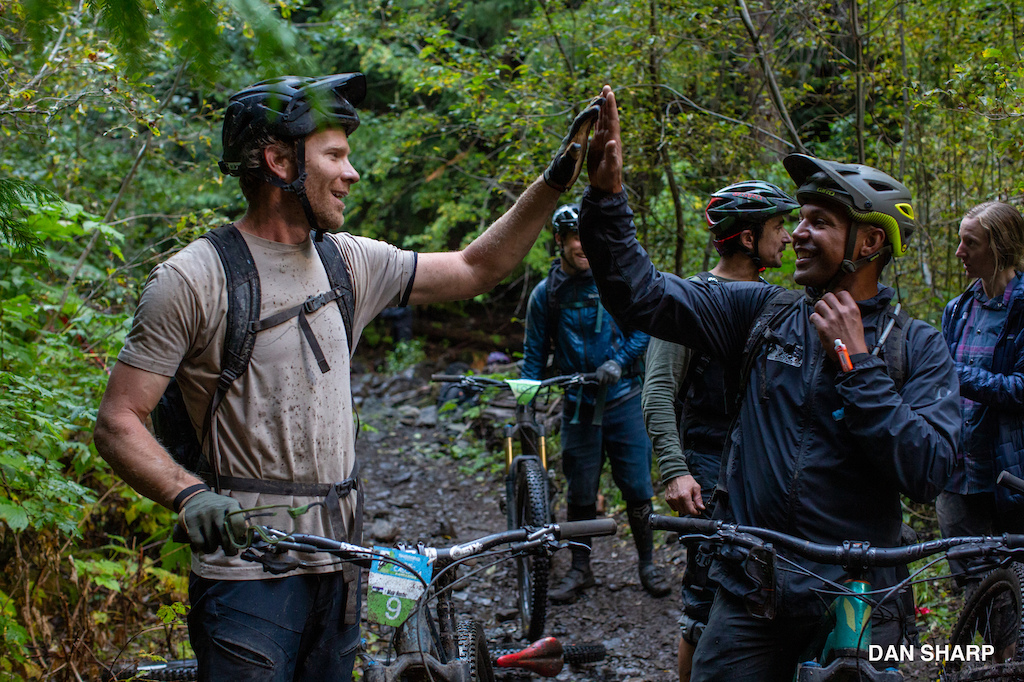 Chris Johnston, who has raced the last four Trans-Cascadias, welcomed the wet weather, “it brings some excitement and adventure to it. I mean, who rides in these conditions normally?” He’s also happy to be back in the Gifford Pinchot National Forest. “I am super stoked that it’s back in the same area again, last year’s trails were unreal, and they say there are about 75% new trails again. That’s pretty frickin’ awesome, I’m really excited to see what they’ve got.”

Chris wasn’t the only one who was thrilled to be back. “There’s so much to explore in these areas,” says Geoff Kabush who has competed at every Trans-Cascadia and won the race twice. “We’re back in the same location but I’m excited to hear that we are going to race a bunch of new stages because that’s the most fun part for me; racing blind and reading the trail. It’s my favourite format and that’s why I keep coming back here.” 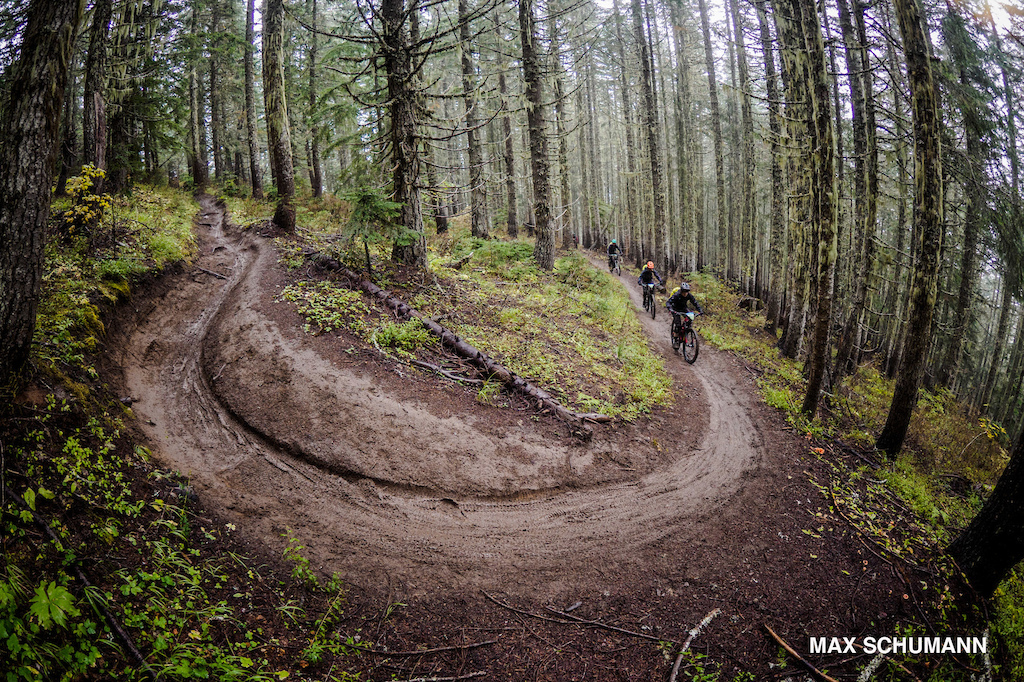 Racers began today with a 30-minute pedal from their drop-off point that took them to start of stage one – a massive 2500-foot descent broken up by a neutral zone. Trans-Cascadia introduced neutral zones over the last couple of years to accommodate for those really painful climbs in the middle of descent that no one wants to race. It is an untimed section in the stage but racers must continue moving forward through it – regardless of whether you are pedalling or walking. “What we’ve seen with this is tighter race times over the four days which makes for more exciting racing,” says Nick Gibson, Race Director. 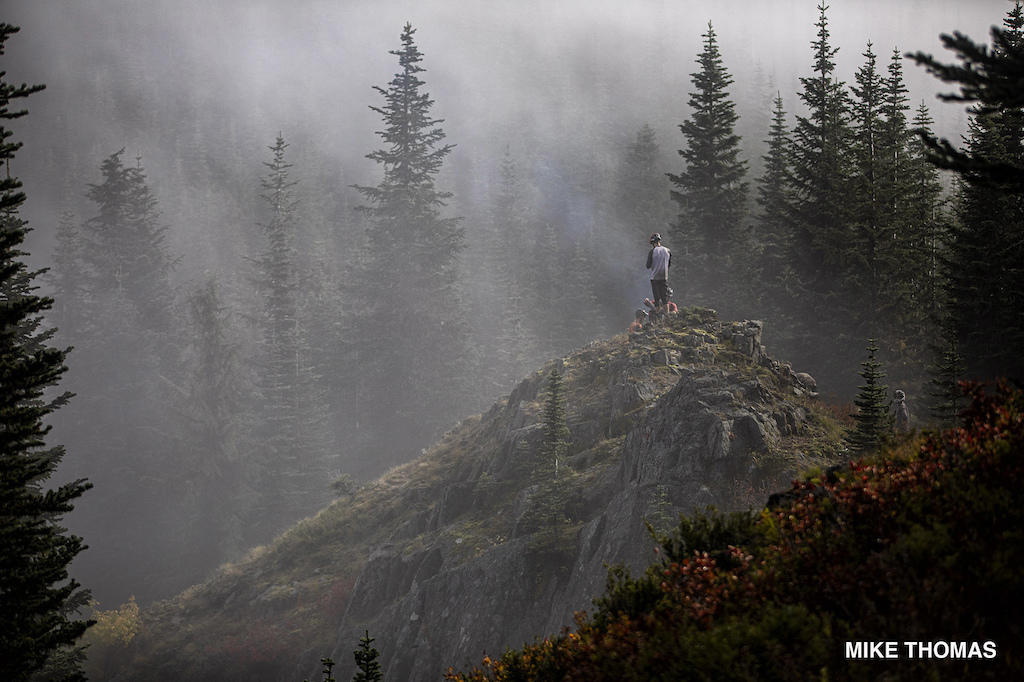 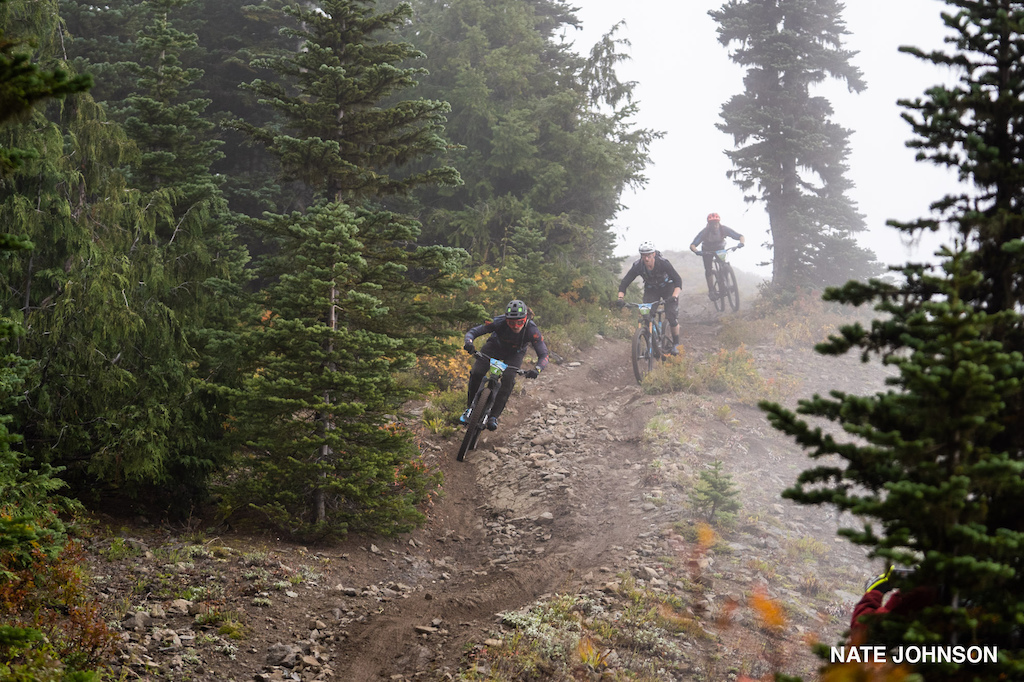 At the bottom of the first stage, racers found a welcome fire, hydration, and a hot lunch waiting. When they were ready, shuttles dropped them in the same spot as earlier but this time, they headed in a new direction towards Stage 2. The transfer was an elevation gain of roughly 1900 feet over 3 miles. 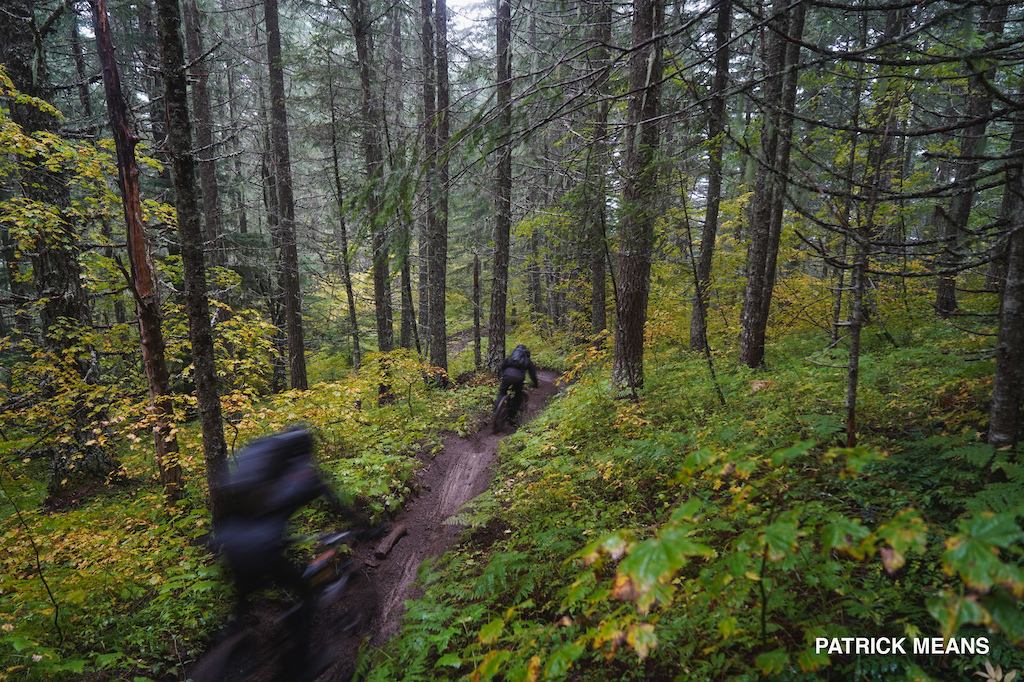 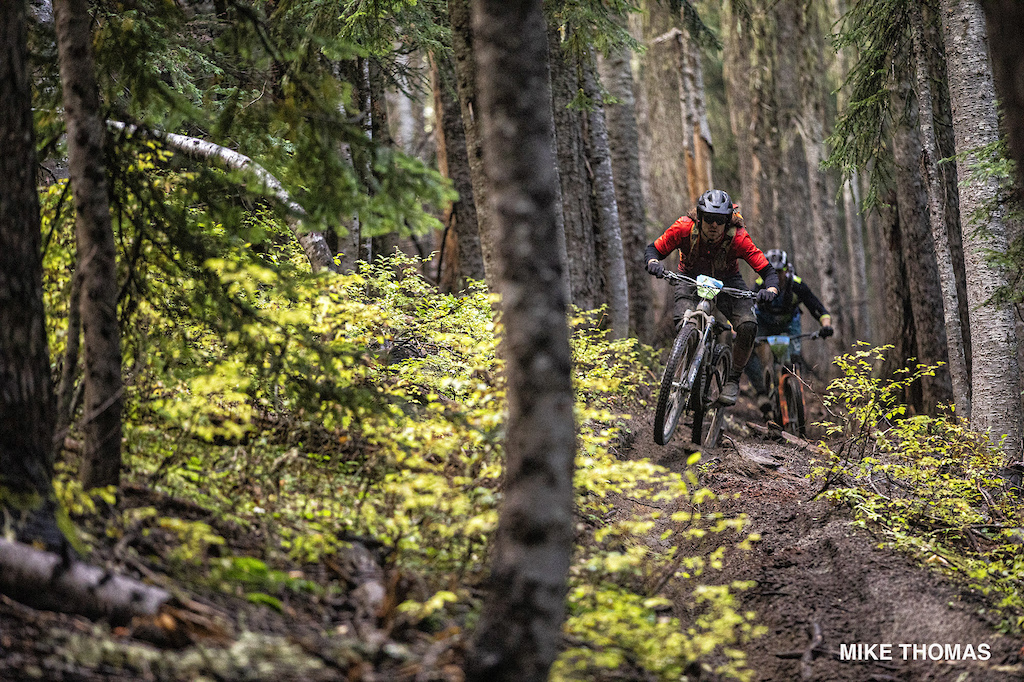 “The first stage was super wet and mucky, so after Stage 1 there was a lot of managing bike, clothing, and equipment so it made for a long day and a lot of clean up,” says Geoff “Luckily, as we crested the ridge heading towards stage 2, the sun broke out and it turned into a pretty nice day.” 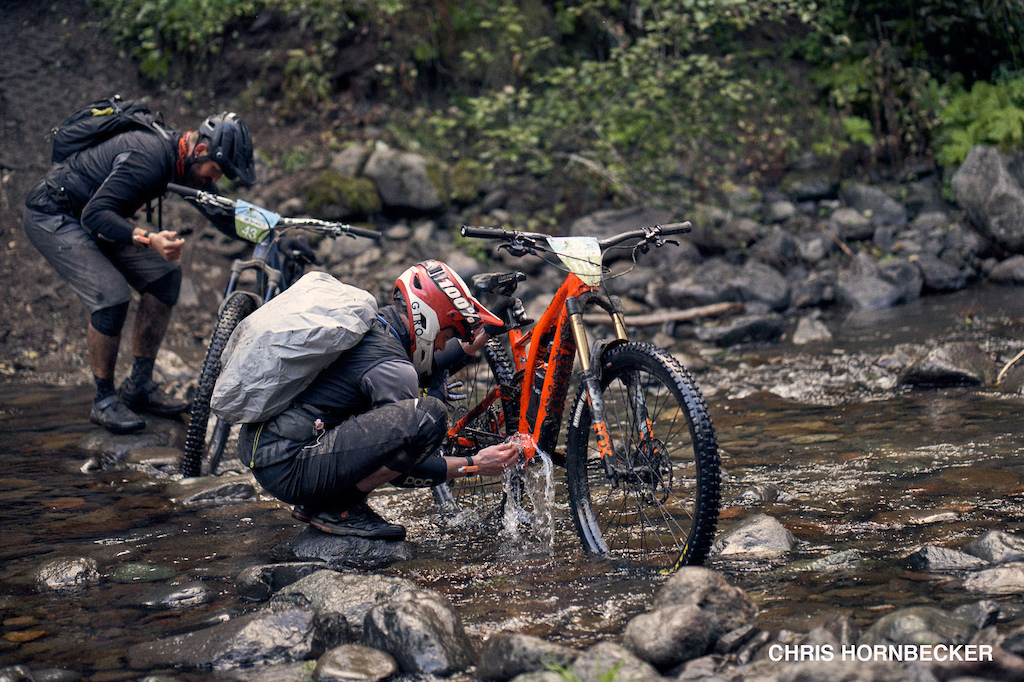 Stage 2 was a short and quick ridgeline descent with a couple of punchy climbs. From the end they had a gnarly hike that was almost 1000 feet elevation gain in less a mile and aptly named The Devil’s Staircase – Nick had (jokingly) assured racers at dinner the previous night “but it’s great, you’ll love it!” 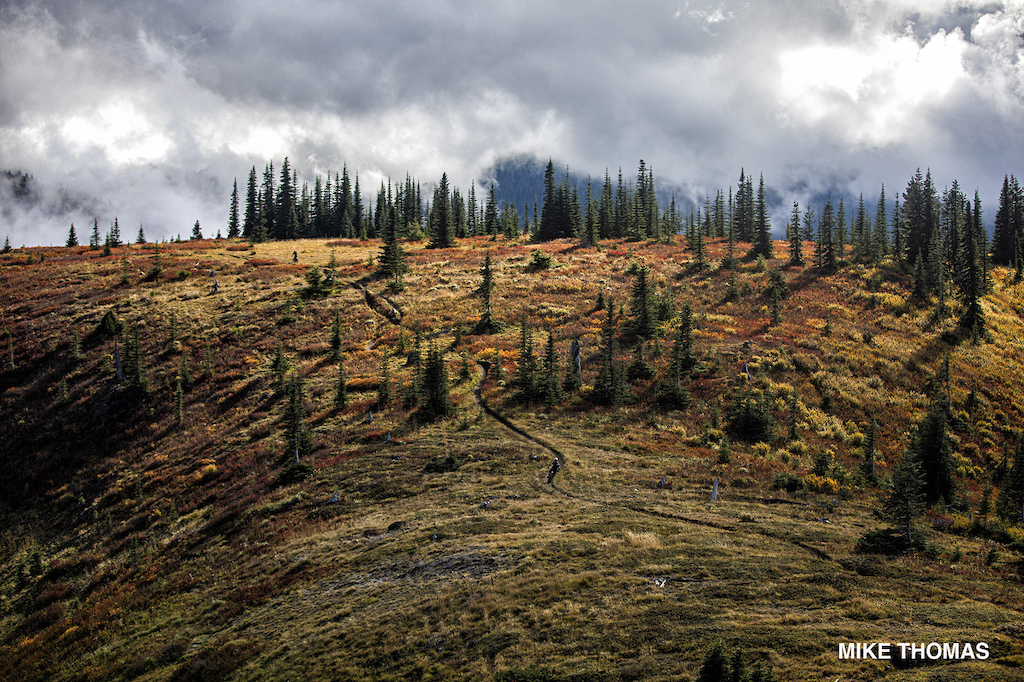 At the top of the hike, Stage 3 was a sweet and speedy 1-mile descent and a favourite of the day for Trans-Cascadia newbie Brooklyn Bell. “It was fast, there was nothing I had to think about or worry about, I could just let go. I also really liked all the alpine and the stunning views on the way to Stage 4.” The gentle climb from the bottom of that stage 3 put racers into some truly unique terrain near Jumbo Peak with incredible fall colours and even the potential to see some mountain goats and views of Mount Adams. 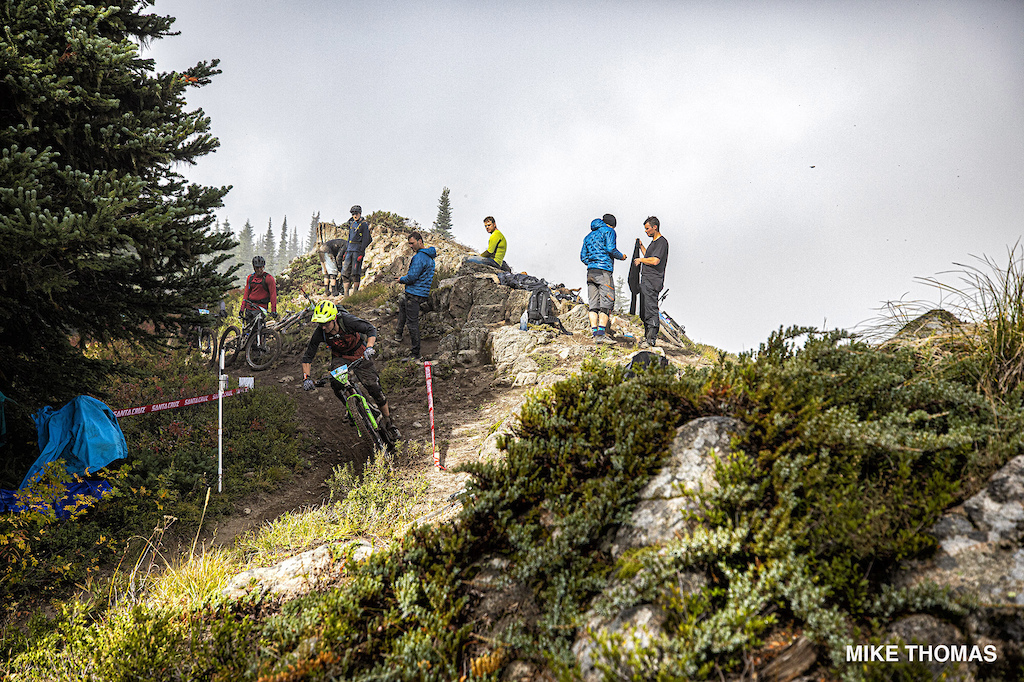 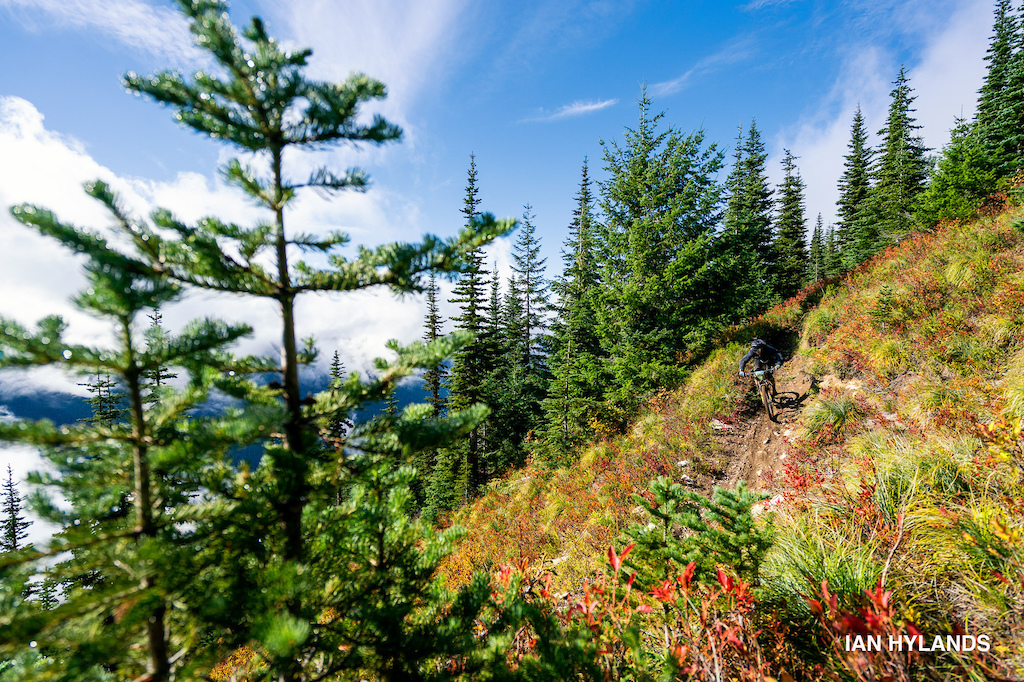 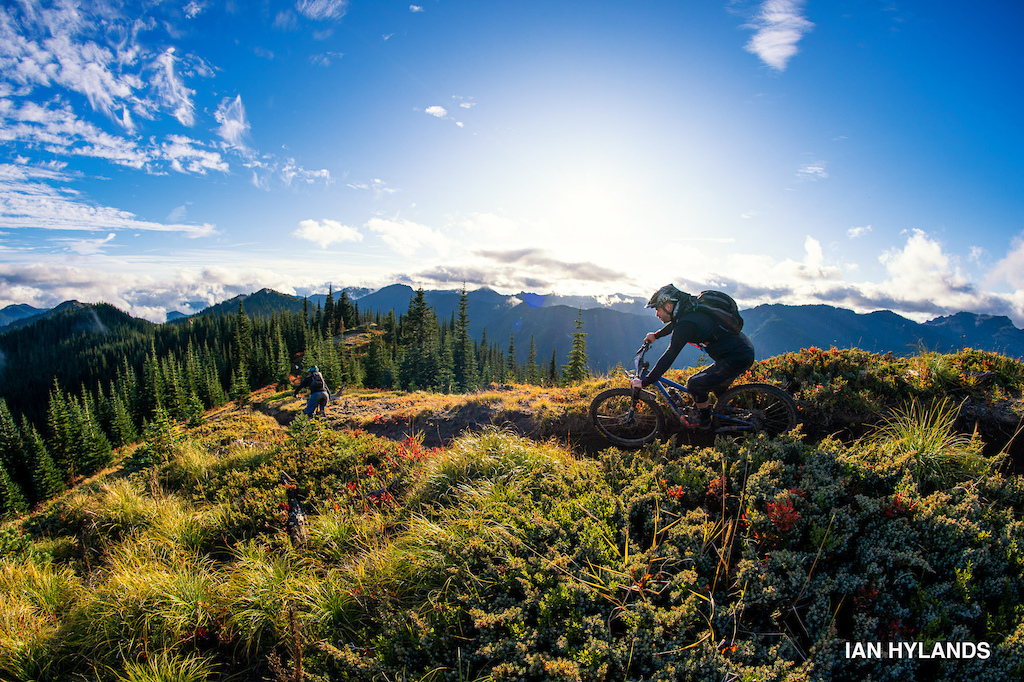 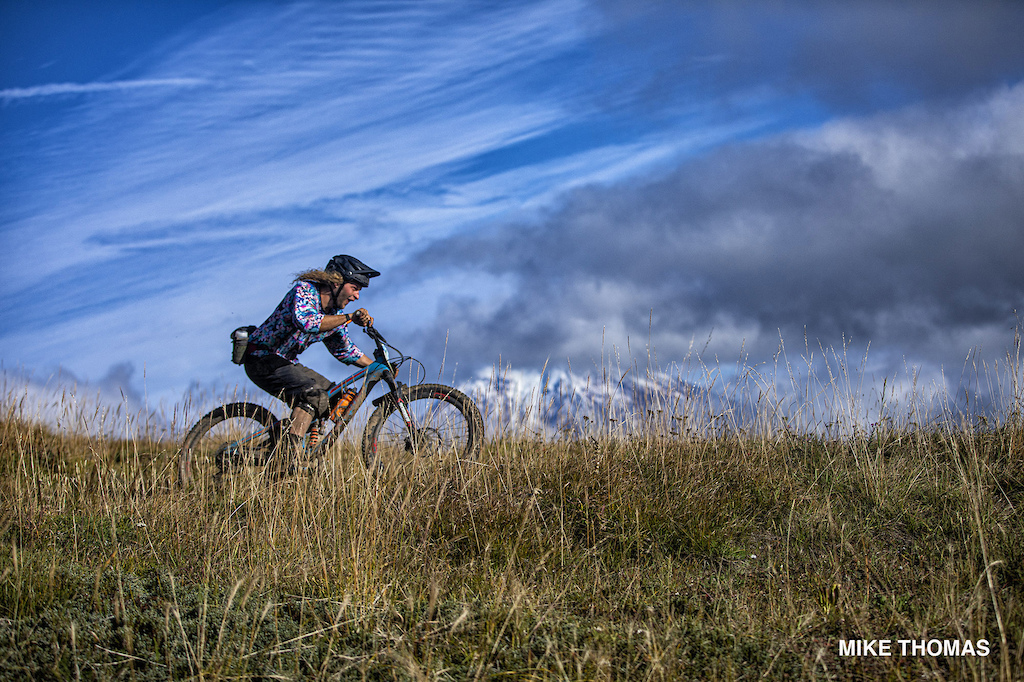 Despite being cold and wet, Brooklyn was still all smiles. “It’s so fun, it’s so community based and so different from any race I’ve ever done. And it’s hard and hard in a different way. Today was so cool, we had no idea what kind of trails we would be riding and to go up into the high alpine and do this adventure ride and then descend through really fast flowy and a little bit more of moto style trails was really cool. High alpine, adventure rides, and fast downhill flow don’t always really go together. It’s cool to see the thought that’s been put into the what people would like riding.”

The last stage of Day 1 was a huge descent with a flat-but-downward-trending section in the middle and a couple of creek crossings. The stage ended on the far side of one of the deeper crossing and racers had been advised by Nick to “either go fast or walk.” 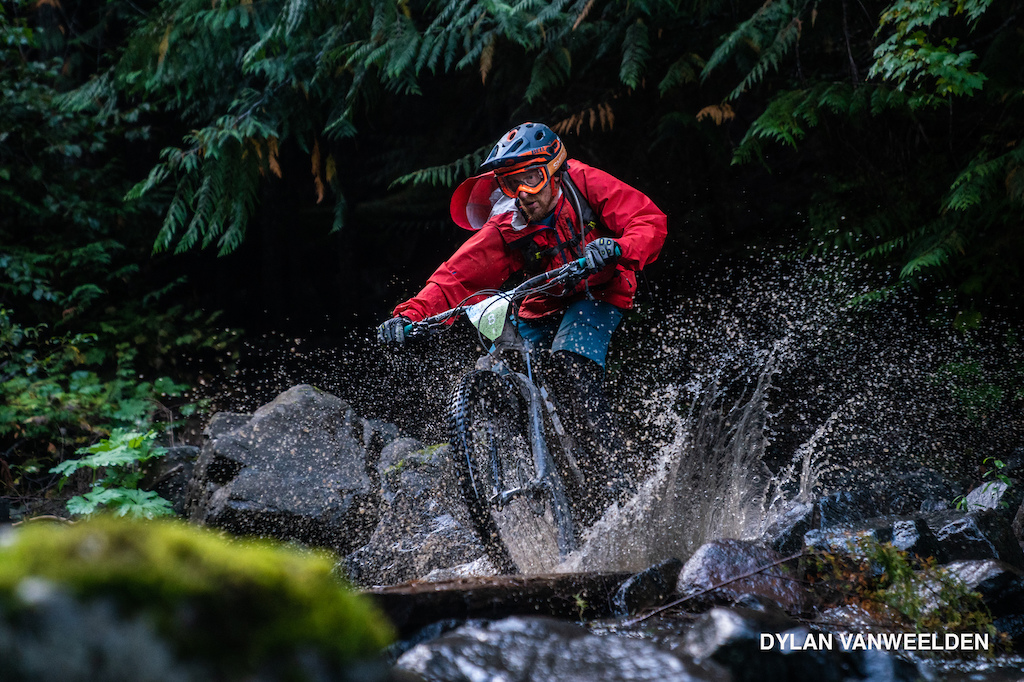 “Dark Meadow, new for this year and an incredible piece of trail with three different sections” describes racer Lars Sternberg. “Fun flowy, perfect dirt with full moto turns up top and then a creek crossing section and then super rocky and toothy down towards the bottom. Pretty mind-blowing.” There was a steady chorus of cheers as racers exited the bottom of the dark forested section. A mellow transfer out with a couple of rolling climbs brought racers back to the vans where a fire was roaring, and beverages were being served. 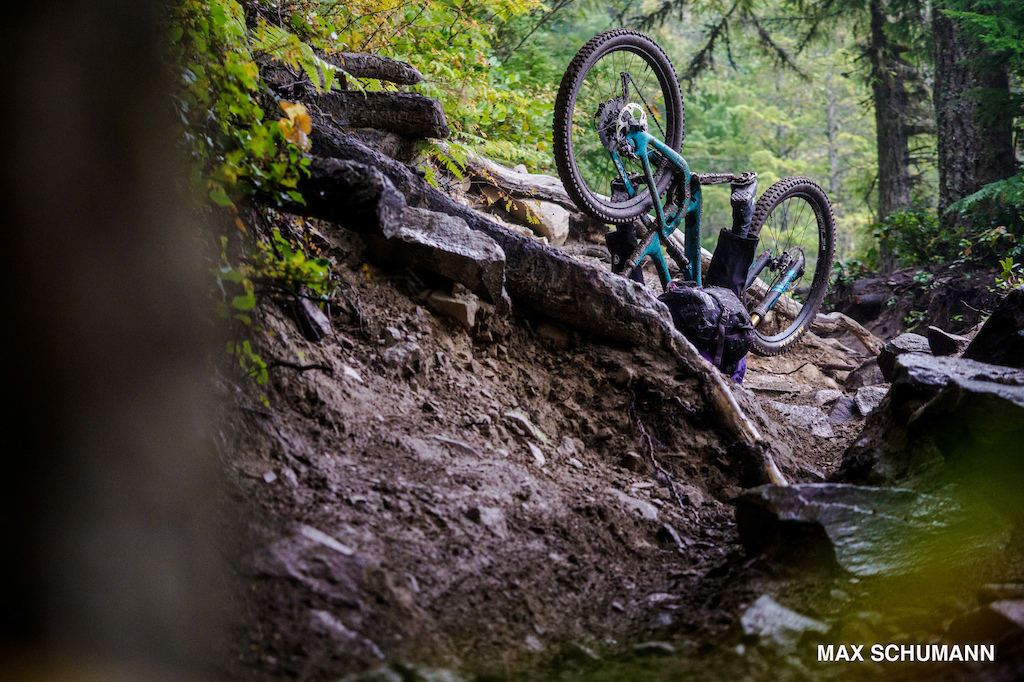 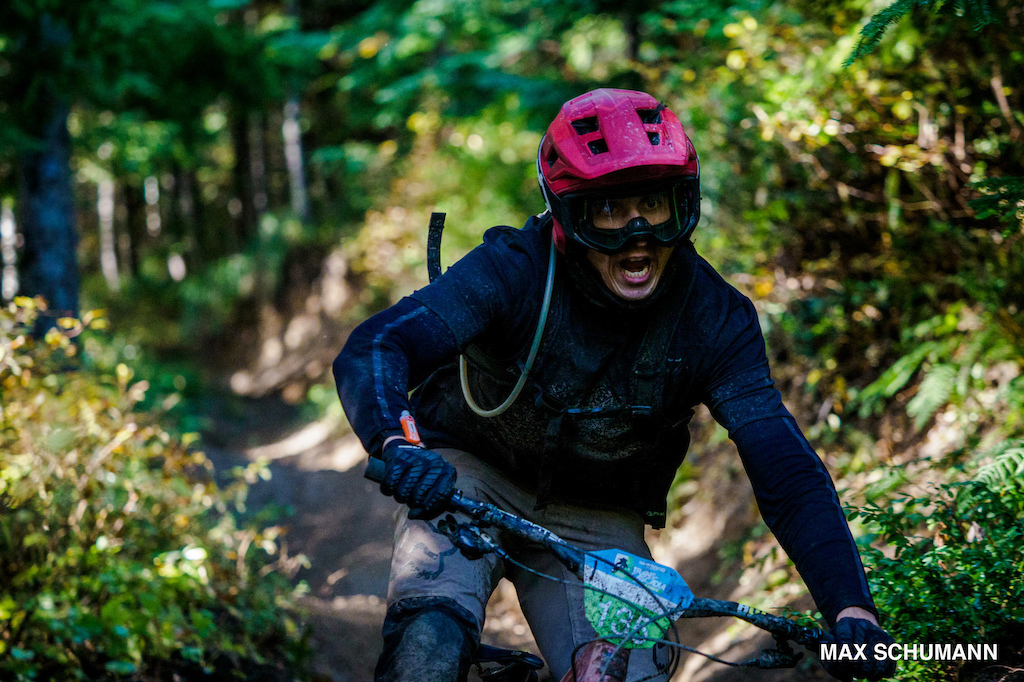 World Cup XC racer, Kaysee Armstrong, felt a little out of her element in the morning when she realized in the shuttled that the tags were still on her knee pads but that didn’t stop her from having an incredible day. “What got me into mountain biking is not racing, it’s adventures with friends,” she said. “Being dragged into the woods with a bunch of guys telling me ‘you can do this!’ It felt a lot like that today, the hike-a-bikes were tough but worth it. Getting up there and those beautiful views, we basically got to go on a big adventure tour and go to places that an XC race never gets to go to. And everyone is drinking beers and hanging out, talking, you just don’t do that anymore in the races that I go to. It’s nice to come here with a bunch of people, make friends, and enjoy it.” 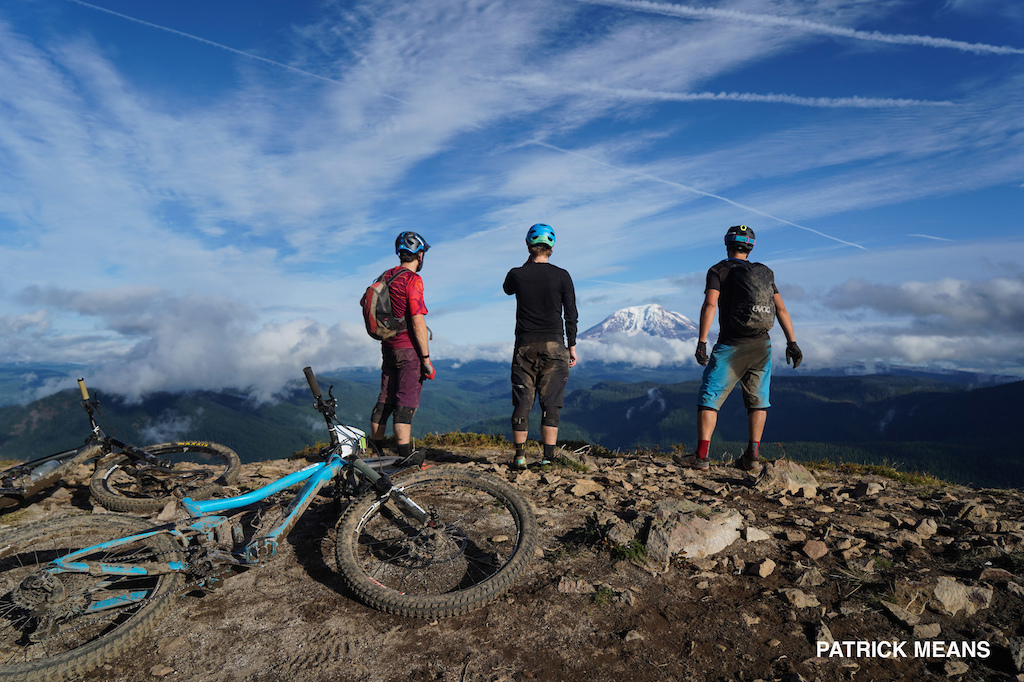 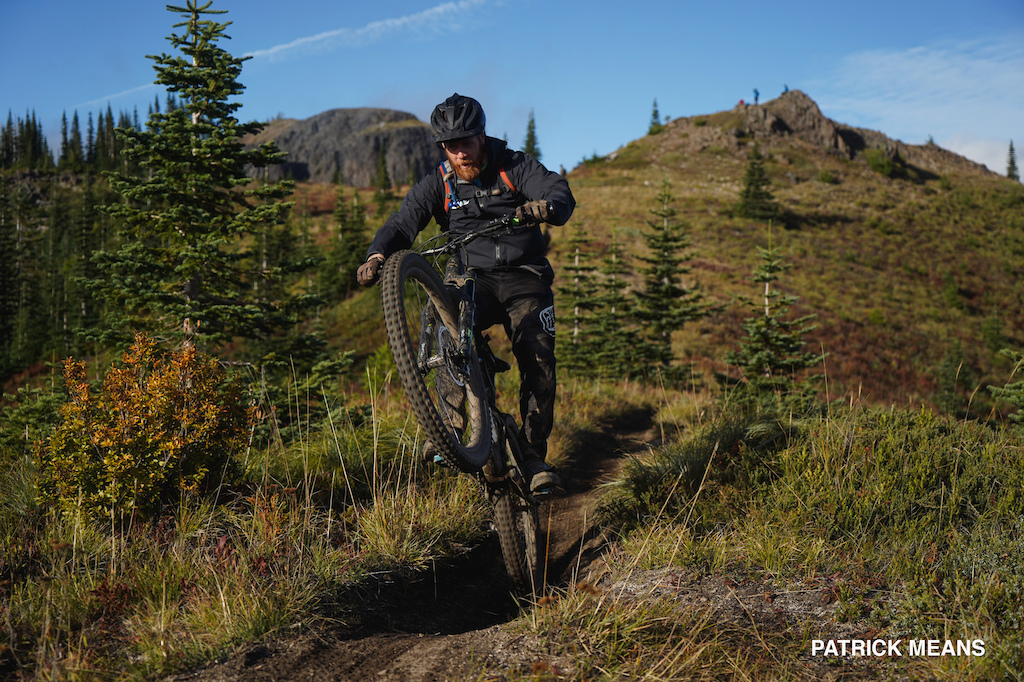 Back at camp heated drying tents, hot showers, campfires, and a gourmet meal – locally foraged spaghetti with seasonal pork ragu – were waiting. Neither wet nor cold could dampen the revelry and spirit of this community as they cheered the podiums after dinner.

Here on the advice of Steve Peat, Loris Vergier, and the rest of the Santa Cruz Syndicate team who were at the race last year, Romain Paulhan took the top step on the podium at the end of the first day. “[They said] you’re going to love it, the trails are amazing, and the dirt is so good – and it was definitely so good!” 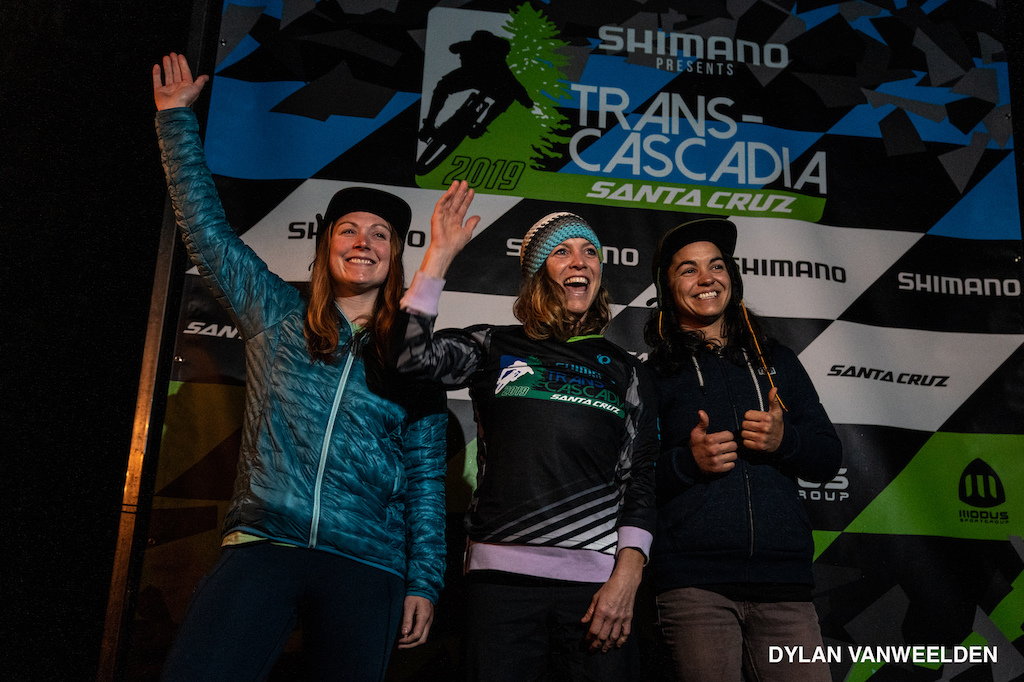 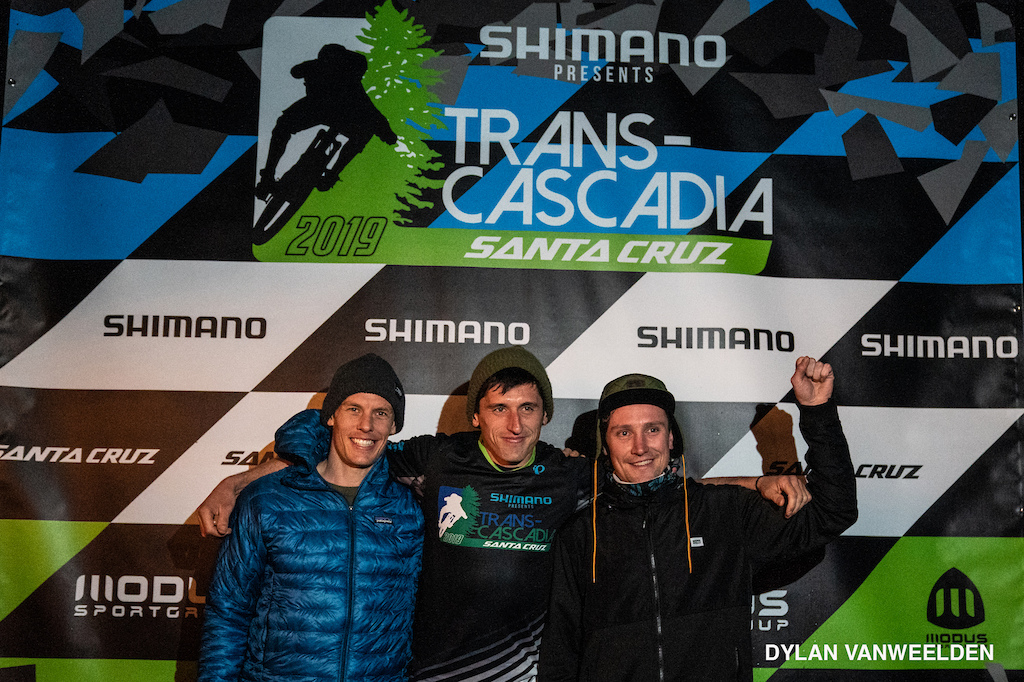 Ingrid Larouche was in the lead for the pro women after Day 1, “This is very cool, this area because you feel really deep and far and you never really know what to expect with the weather and these elements that add to the whole experience. I feel like everyone who comes here comes in with this idea of having such a great time so if you go anywhere, like over by the fire, everybody is so fun to hang out with!” 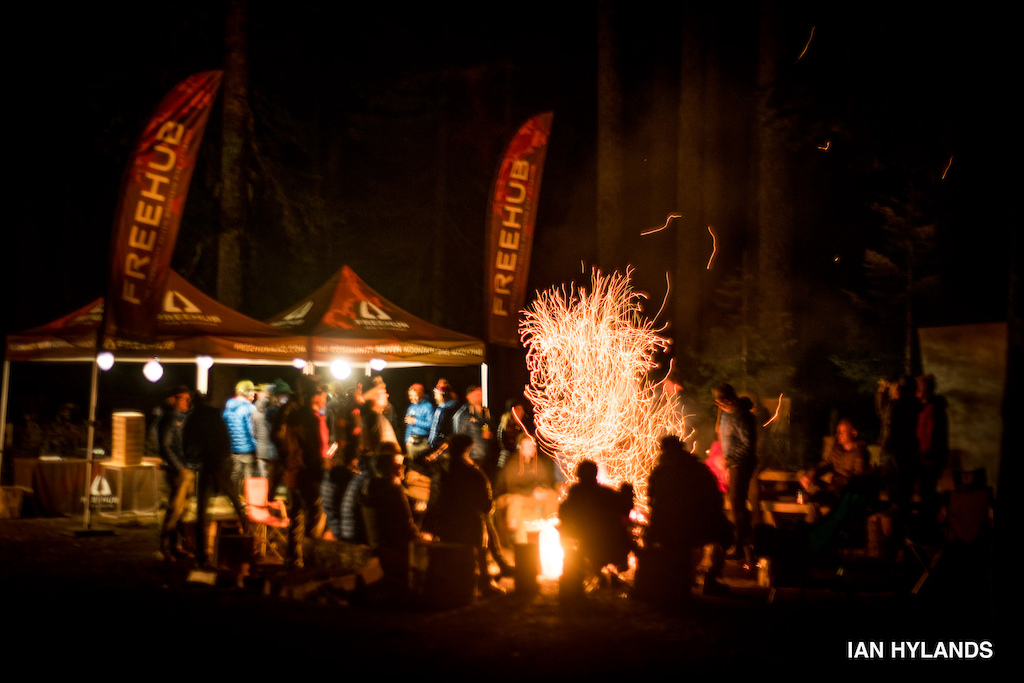 This event is under special use permit of the Gifford Pinchot National Forest.

elyari (Sep 28, 2019 at 5:45)
Awesome experience, whish I can do it some day. About Chris Johnston comment on wet weather: “I mean, who rides in these conditions normally?” jejejeje...dude, come to Ireland, we have that for 4 or 5 month DAILY and rest of year 1 out of 3 rides are on wet, muddy, slippery conditions.

djbuilder (Sep 28, 2019 at 10:12)
The wettest area in Ireland according to Wikipedia averages 1431mm per year. North Van averages 1399mm per year. Pretty sure we understand wet, muddy, slippery over here too.

elyari (Sep 28, 2019 at 13:50)
@djbuilder: Fair play! I was 1 month in Whistler couple years ago, and spent 4 days in Vancouver, never knew about rain in there. So curious that did a quick search and indeed the total amount of rain on both places is very similar. Main difference is that in Ireland is more srepad over the whole year than just from Nov to March. In summer here is unusual to have more than 3 to 5 days without rain. From what I've found seems in Vancouver there are long periods without rain in summer, longest been 58 days according to couple of stats. I'll never imagine that in Ireland, almost 2 months without rain, never gonna happen XD

fledger (Sep 29, 2019 at 16:09)
Out of curiosity, why have neutral zones instead of two stages with a transfer? Is the stage itself just too short to warrant splitting in half, or is there another reason?

Seriously, who writes this garbage?? And who isn’t editing it? There’s such a thing as a mistake but ”locally foraged spaghetti” is a horrific butchering of the English language.

One would have thought that in acquiring Cycling Tips Pinkbike would have acquired their writers and editors.