Through the Lens - Justin Brantley

Join Pinkbike  Login
In the past we had done a minor Through the Lens with photographer Justin Brantley, however almost a year has gone by and he has stepped it up a ton. When I first spoke with Justin he had basically just started photography, however Justin is proof that in a year a ton can happen. Brantley is becoming a known name in the industry, and is shooting big name riders on a daily basis. I figured I would reconvene with him and bring all our readers back up to speed on him.

How old are you? How long have you been shooting photos?
I’m 28 years old and have always liked photography, but only got serious about 2 years ago.

How did you originally get into photography?
I picked up a mountain bike after many years of not riding. I had a bad knee and was going to college. I started riding a ton and met some really talented people. I started taking pictures with my little Canon elf870 to show my friends these crazy riders, and here I am 2 years later.

Have you ever attended schooling for photography or anything along those lines?
Nope. I have been in basic photography classes in high school and some graphics classes in college that involved photography. Other than that I’m all self taught.

Is there one aspect of riding you prefer to shoot?
For sure! I love to see crazy stuff go down that I would never possibly think of doing. I would say that my favorite type of riding photo to shoot would be dirt jumping. I love to work with a rider and dial in a trick by taking the photo at the best possible time. There’s nothing like it, to see a rider get amped and push his or her limits during a photo shoot. However, I am getting into all sorts of riding pictures as time goes on. I would love to go to some World Cup Races in the future. 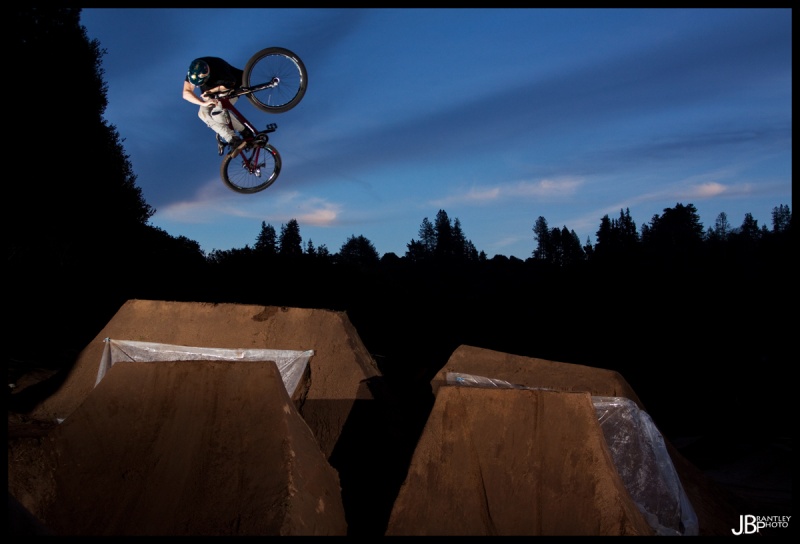 Canon or Nikon? Why?
Canon. Just the route I took. Either is good. I might change to Nikon, maybe not! Ha ha ha!

Do you ride bikes? As much as you would like to?
I love getting on a bike. I grew up riding Moto and Bmx. I got into action sports photography because I was out riding my bike and met some crazy dudes that jumped really high. But now that I’m doing photography full time I don’t have a ton of time to ride. It’s turned into a full time gig.

Living in California do you shoot any other photography, or just biking?
I have not really had time to venture outside biking just yet. I have paid the bills by delivering pizza for the past few years. Now that photography is starting to pay the bills, I hope to find more time to shoot a verity of things. I would love to get into some HDR landscape shots, studio portraits, and maybe some different sports like motocross, football, etc. The options are endless. 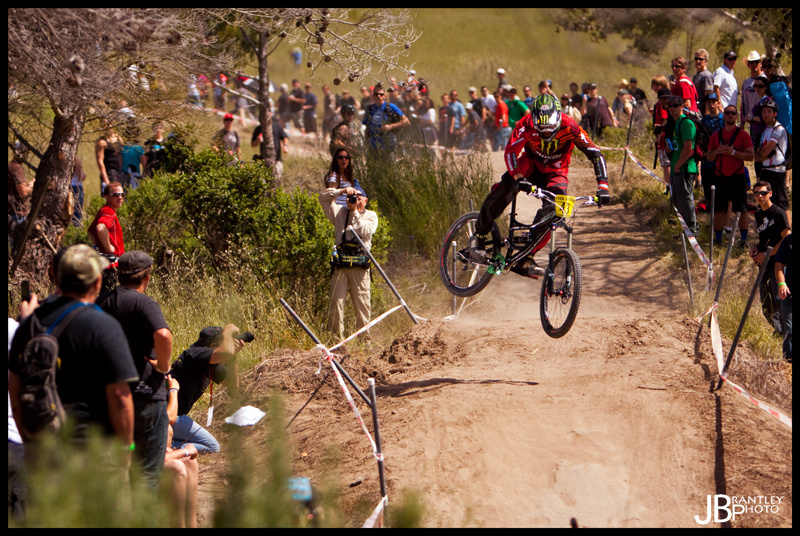 When you're not shooting or editing photos you are…
It seems like I have no more time outside of shooting photos, delivering pizza (which I just cut back to 2 days a weeks), chilling with my girlfriend in our new house, then editing photos and emailing all night. Hopefully soon the photography will take over the pizza job completely and I’ll be on my way to being a successful photographer.

Do you think the notorious Aptos Post Office Jumps have aided you in getting to where you are as a photographer?
Oh man do I! There is so much talent brewing in Aptos it's ridiculous. All year round there is riding here. As well as bike industry people like Specialized, Santa Cruz, Fox, Giro, etc.

What's your favourite photo you've shot to date?
I snapped a shot of Brandon Semenuk doing a sick 360 invert table when we first saw them at the Post Office Jam. I still love it! 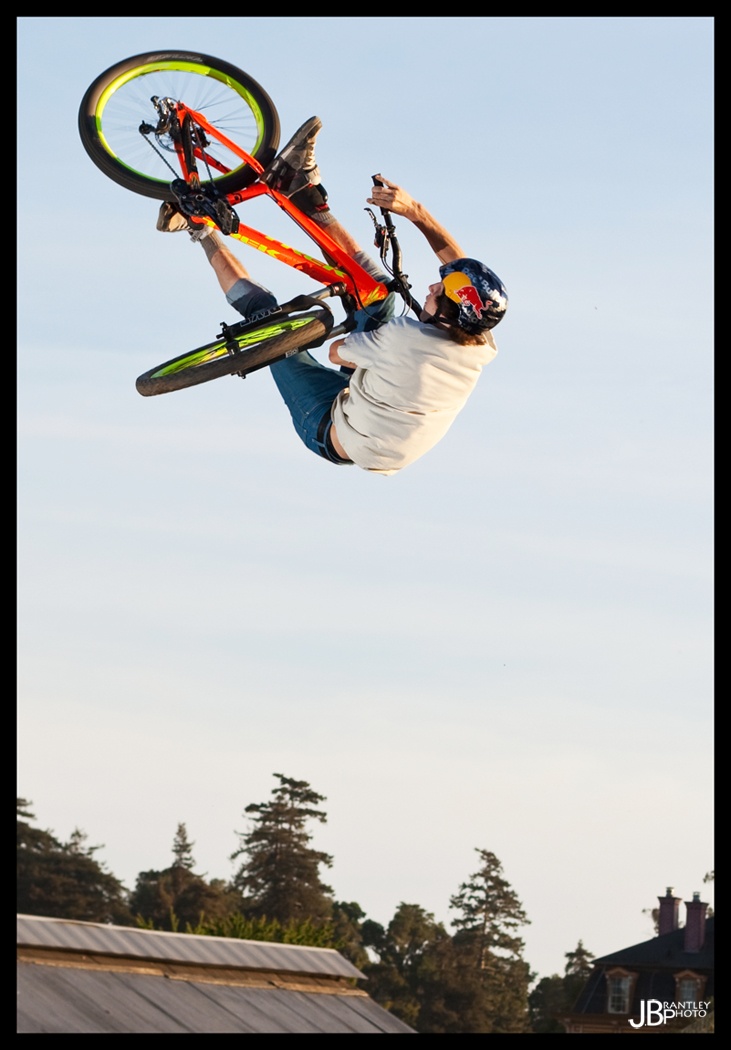 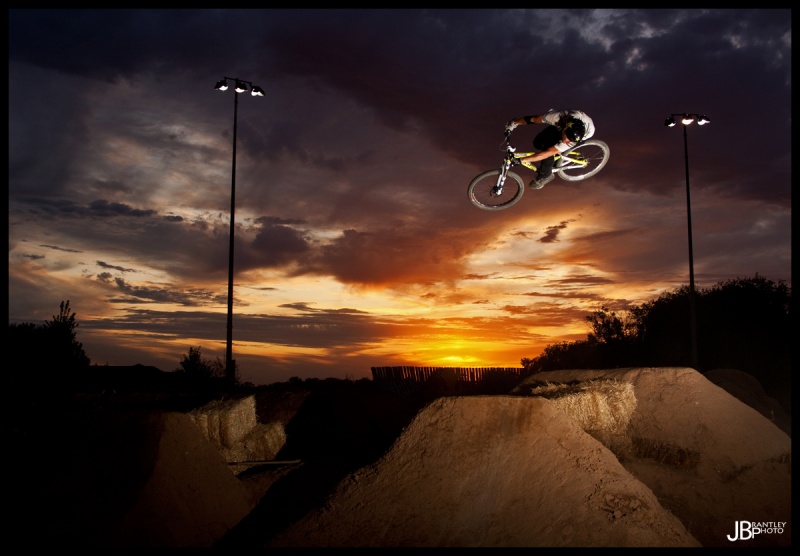 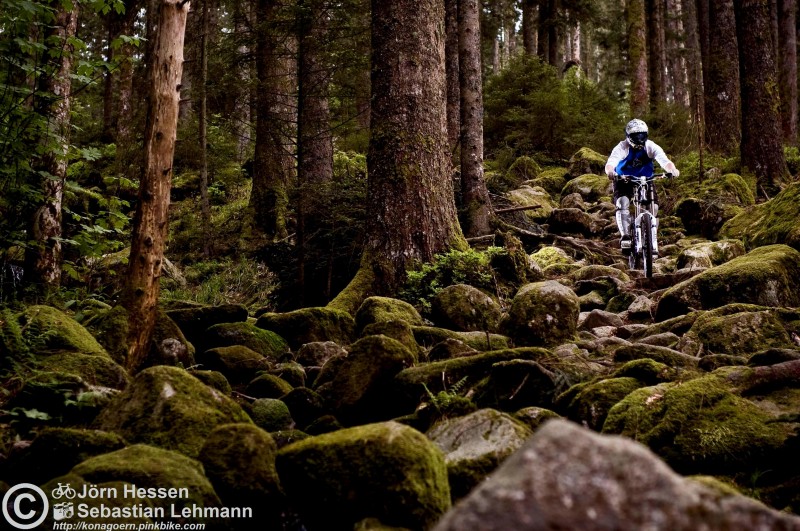 Is there one other photographer you look up to?
Recently I have been looking up to Sven Martin's work. I have had the opportunity to work with him at Sea Otter and at Goldman's Jam this past weekend, and the man is a legend. He rules the field amongst us media people and takes amazing pictures. He is the rider's friend, not just some dude out there taking pictures. Love his work!

How many POD's have you got on Pinkbike.com?
I have no idea. But I assume around 25-30. Thanks to you guys at Pinkbike for liking my work and giving me the POD’s! 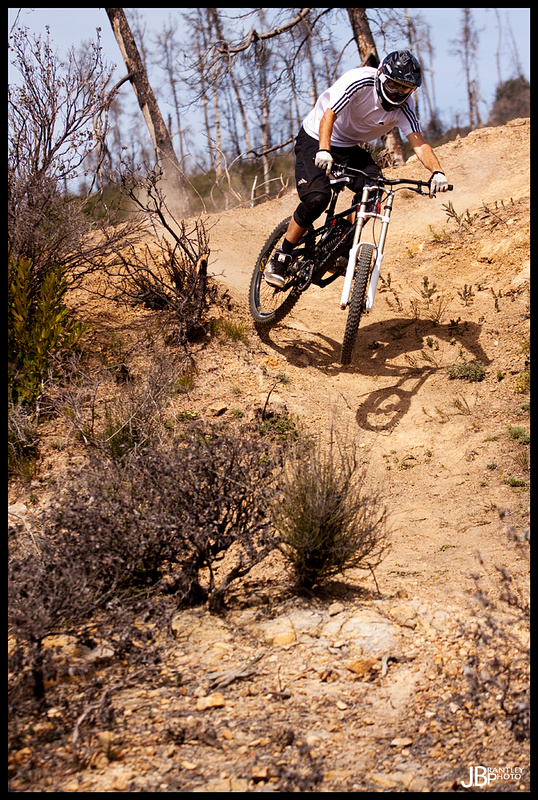 Brantley's Most recent POD
Who is your favorite rider to shoot with?
I don’t know! I am going to have to say Ryan Howard. R-Dog was the first dude I shot jumping at the Post Office jumps. Heck, he was the first guy I had seen hit the Post office Jumps. He was super cool and let me take some pictures with a little point and shoot. Ryan was digging when I showed up and I walked up to him and asked if he rode these things? He replied, “Yeah.” Ha ha ha, I then asked him if he does any tricks? He replied, “Yeah.” Then I was like well then let me see! Ryan was all by himself and was not going to ride. But he replied, “Sure dude let me throw my pads on and I’ll take a few runs.” So thanks Ryan for all the inspiration in shooting Dirt Jumping. Now Ryan Howard is one of the smoothest and steez'iest riders in the game and it's always a pleasure to get him in front of the lens! 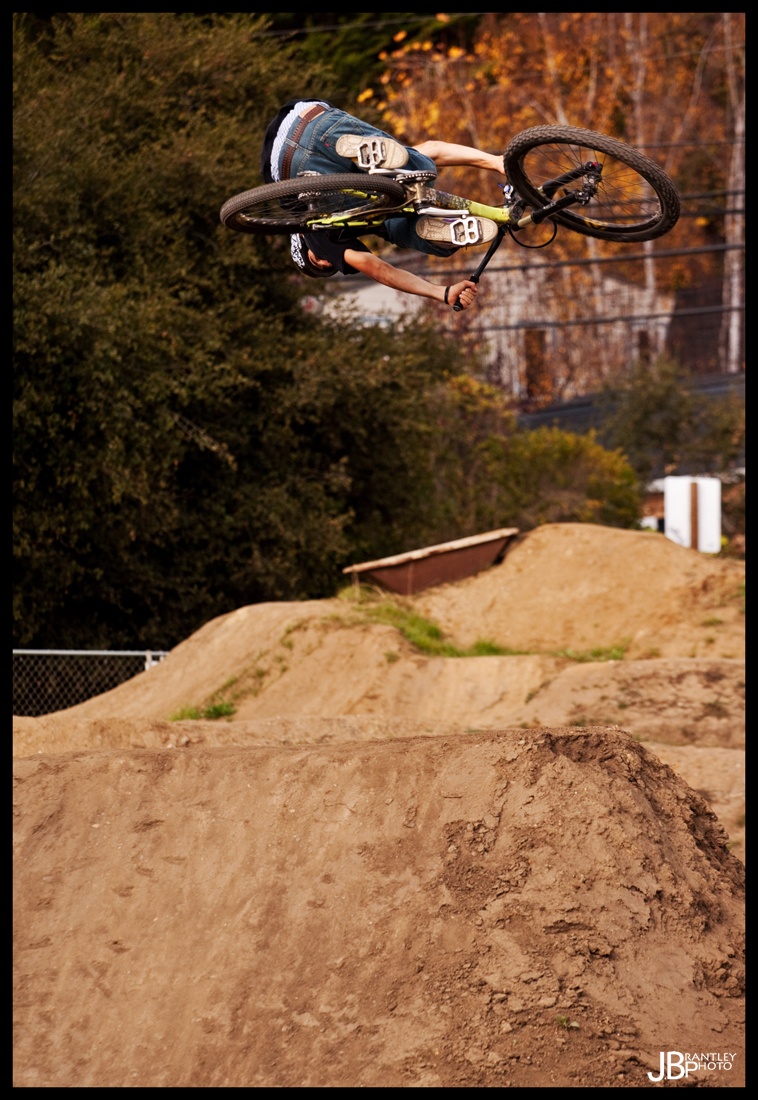 Who has helped you along the way in getting to where you are?
I would like to thank my girlfriend and her family. Without them I would not be where I am at today. Big thanks to them for sticking with me while I started taking pictures. It doesn’t make that much money, you have to be very persistent.

Any final shout outs you want to give?
To all the riders in Aptos! Ryan Howard, Jacob “Cob” Hyde, Jack Fogelquist, etc. Jason Peters for helping with all the basics of pro photography! All the other photogs from around the world here on Pinkbike that I've asked so many questions. I thank you guys for your long and detailed responses to my photo questions! To Pinkbike for being so supportive of my work and all your guy's help in promoting me. X-Fusion, Tyler McCaul, John Hauer. Jay and Keith at Banshee Bikes. And thanks to all the people that like my work, it means so much to me.

dirtbagluvin (May 7, 2010 at 9:05)
It's cool to hear that you didn't go to school and are basically self-taught. I aspire to keep stepping up my photog skills as well and it's nice to know you can get some attention w/o being entrenched in school/life-long practice. Keep it up!!

charleyboy14 (May 5, 2010 at 13:17)
disagree as far as users who post things on pb i have to say Seb should win the title for poy but this isnt the time or the place to talk about it.

ericpalmer (May 5, 2010 at 14:27)
sweet lil interview guys & amen to that shot of Seb's
Oh, the 2nd pic is in twice just by the way & you might wanna run a spell check on that while you're at it are some interesting words in there - like(Sven Martians)

konagoern (May 5, 2010 at 14:35)
haha yeah man, stoked for the props and the mention, really means much to me! All photography credit goes to seb, sure, but beeing my best friend and neighbour for a long time we always appear in a double pack haha! You really deserve this interview justin, when I look at your progression, it is just amazing! Remembering the time when the first notes on my dashboard appeared j-brantley uploaded a photo, they were good for sure, but now they are just mind-blowing! Pretty stoked for you justin, you really deserve the credit you get in the last time and to be where you are today, hope you can make it for a living! Keep it up and all the best jb, looking forward to meet you in whistler this summer!

ehrenmcphee (May 5, 2010 at 15:14)
Awesome. I love seeing all these write ups with photographers/video people. Shows you what goes on behind the scenes.