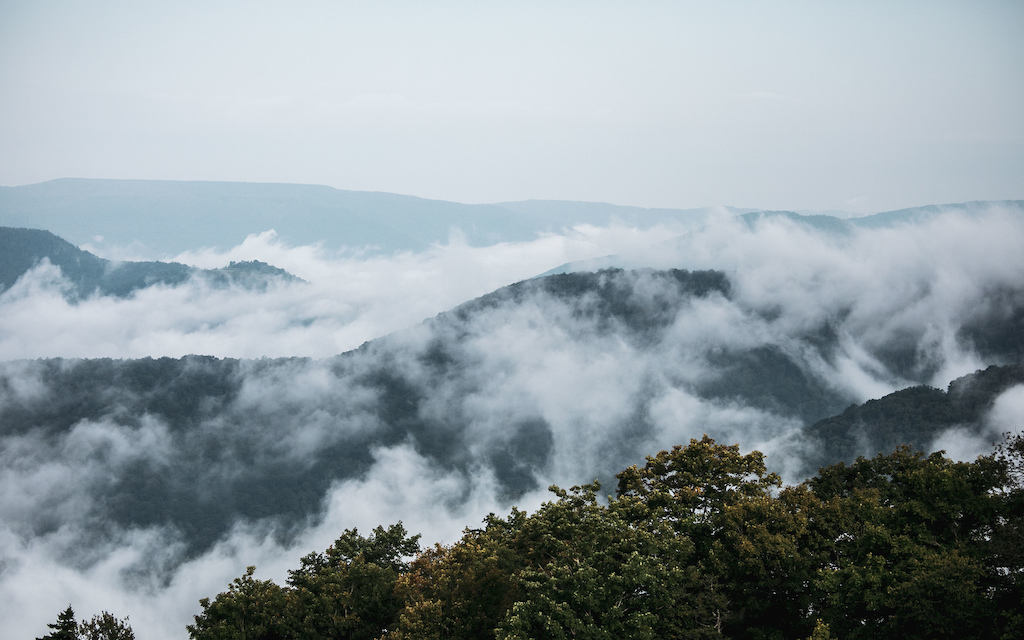 Inside Perspective
Snowshoe World Cup
Snowshoe, West Virginia USA
Words & Photography by Max Morgan and Sergi Barnils
After a long season racing all over the world, the last race of the year was the one I’ve been anticipating the most. The remote ski town of Snowshoe, West Virginia hosted the 8th and final round of the UCI Mountain Bike World Cup Series. Having raced at Snowshoe plenty of times over the last ten years, this race has always been highlighted on the calendar ever since the World Cup schedule was first released over a year ago.

For 2019, I've been fortunate enough to compete in the full World Cup Series, and for the final race of the year, I wanted to give an inside look at what it takes to prepare and compete at the highest level of the sport. Thanks to Sergi Barnils for covering the experience and to Newground and Industry Nine for making it happen. 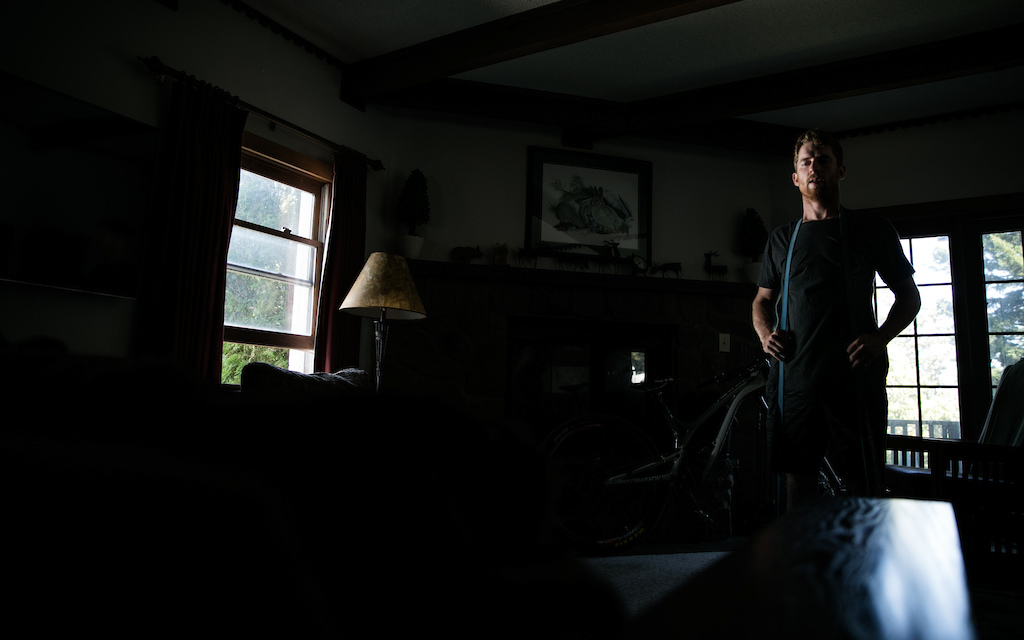 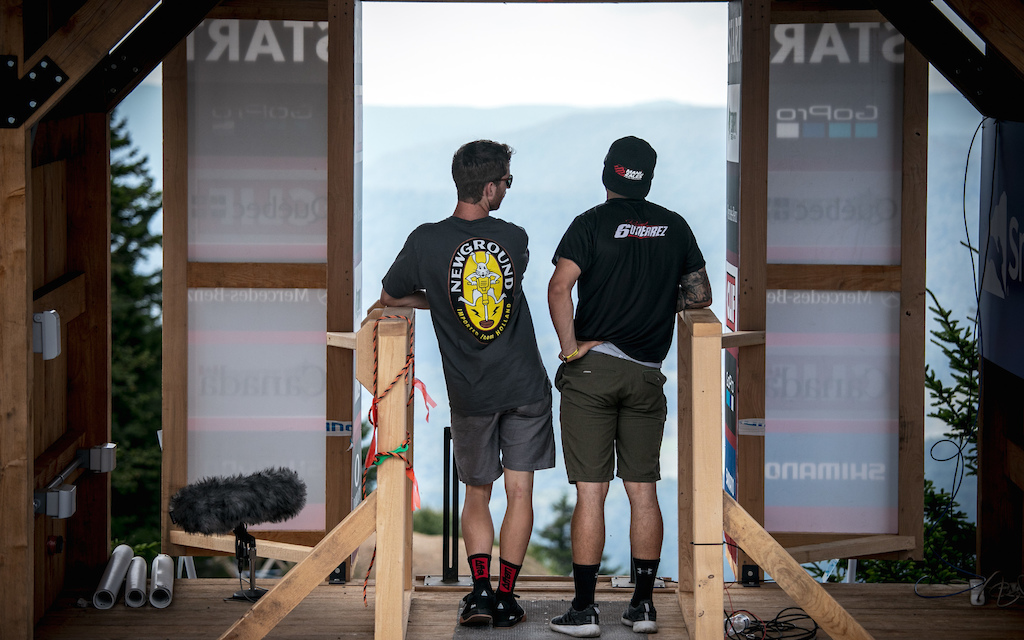 Time for track walk with Rafael Gutierrez
Believe it or not, walking the track can be one of the most important days during a race weekend. All riders take a different approach certainly, but for me walking the track at Snowshoe was more than just learning the lay of the land. I spent a lot of time looking for and finding visual references for blind obstacles, anticipating where holes might develop, and even studying exactly where specific poles had been placed and how the racing line might differ from the beaten in trail. For the sections where I wasn't sure which line option would be the fastest, I worked out a game plan for how to be as efficient as possible trying different options throughout practice. 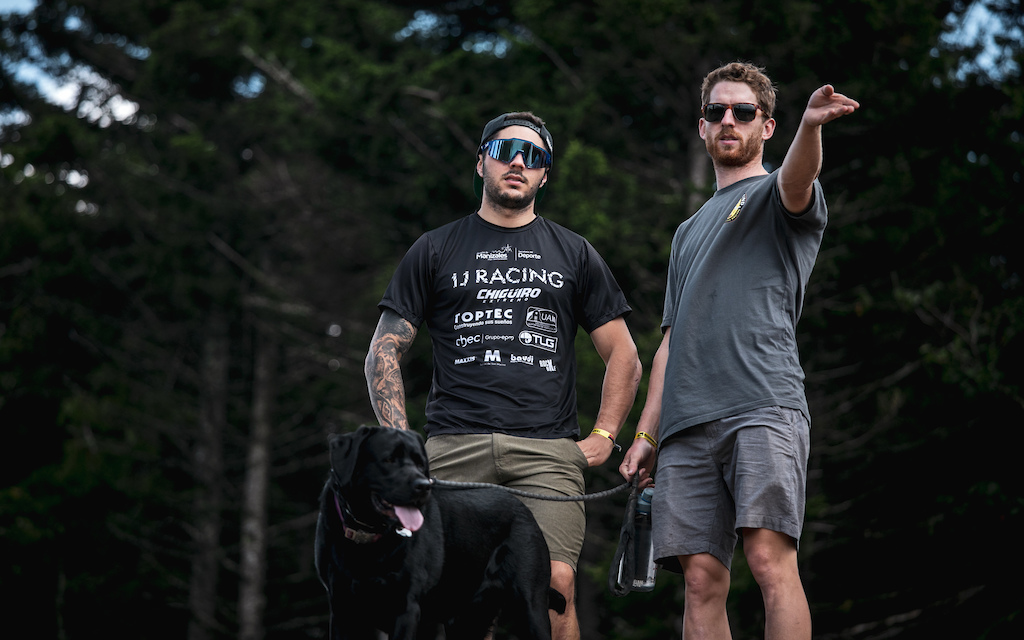 After walking the track, it was really great to see how much work the entire mountain and trail crew had put into preparing this course. One of the owners and operators of Windrock Bike Park in Oak Ridge, Tennessee made the trip to Snowshoe earlier this summer to get the mountain's most prestigious downhill race track world cup ready. I've raced here at Snowshoe for both the National Championships and the U.S. Pro GRT series over the last few years, and this was certainly the best this mountain has ever looked. 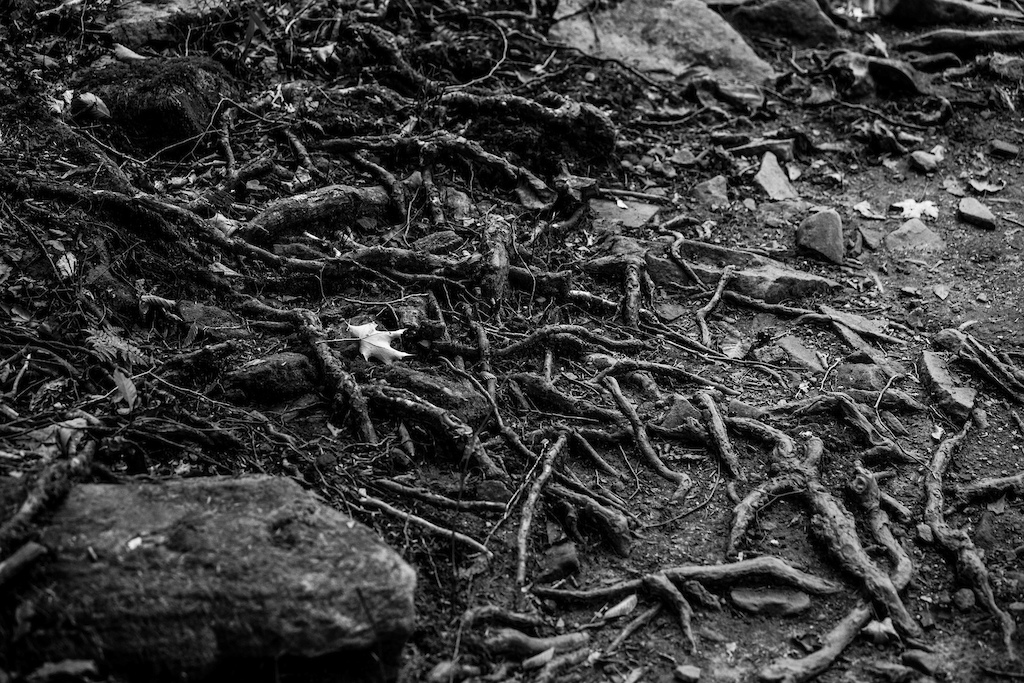 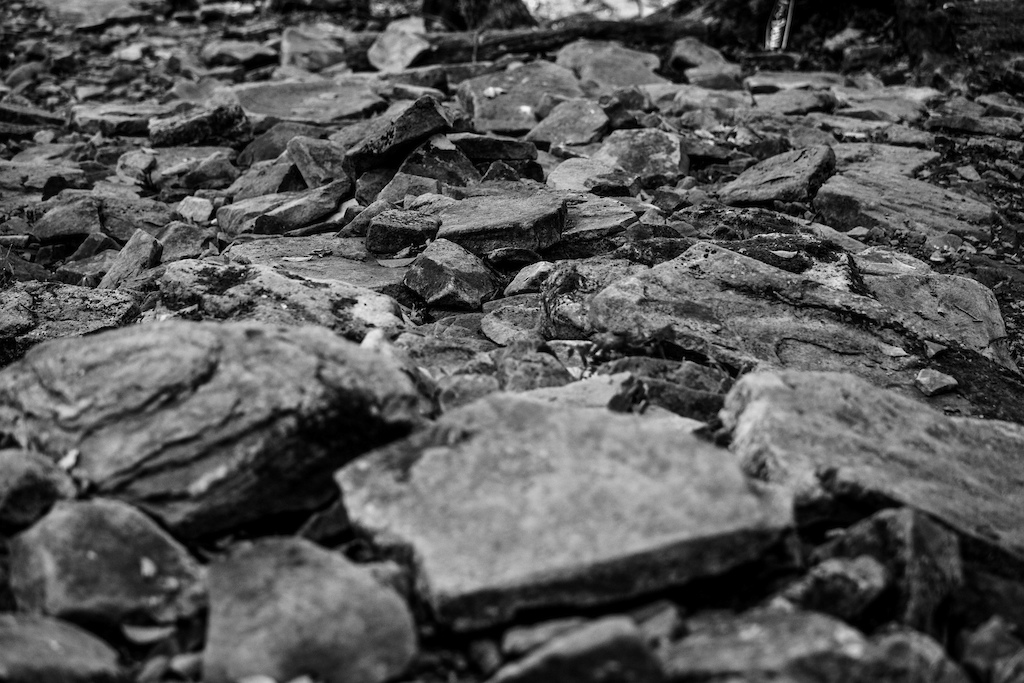 The track here in Snowshoe has a little bit of everything

Throughout a typical World Cup race weekend, much more time is spent tinkering on bikes than riding them. For me, working on my own bike is just as much mental preparation as it is making sure the bike is ready. It would feel a bit strange having someone else as a mechanic just because it's always something I've done myself. Of course there are times when parts on the bike break or you get a flat tire for example, and so I just try to do the best job possible being prepared for those moments. Some of my close friends like to give me a hard time and say I am too dialed but it can really make a difference when you are crunched on time and need to swap out a complete wheel or brake lever.

It never really felt that long, but before I knew it, 5 hours had gone by and the entire bike was torn all the way down and then built back up again just to ensure everything was running as smooth as possible; lower leg fork service with new bath oil and foam rings, cleaning and greasing headset and frame linkage bearings, fresh Galfer Advanced metallic brake pads front and rear, brake bleed front and rear, a new set of Industry Nine Grade 300 wheels, and new Maxxis DHR II tires going on for the start of practice. 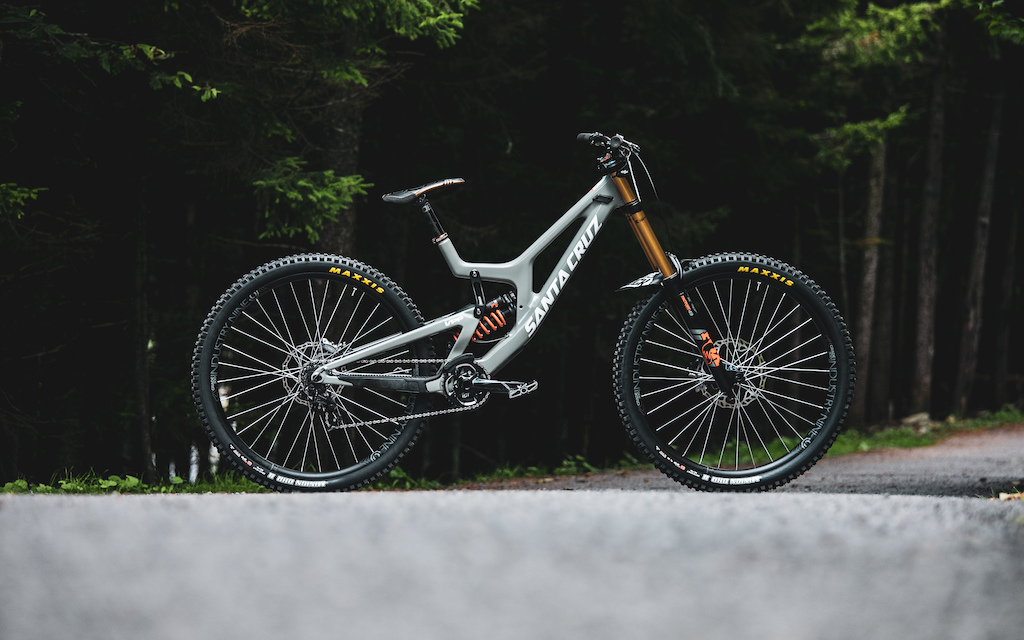 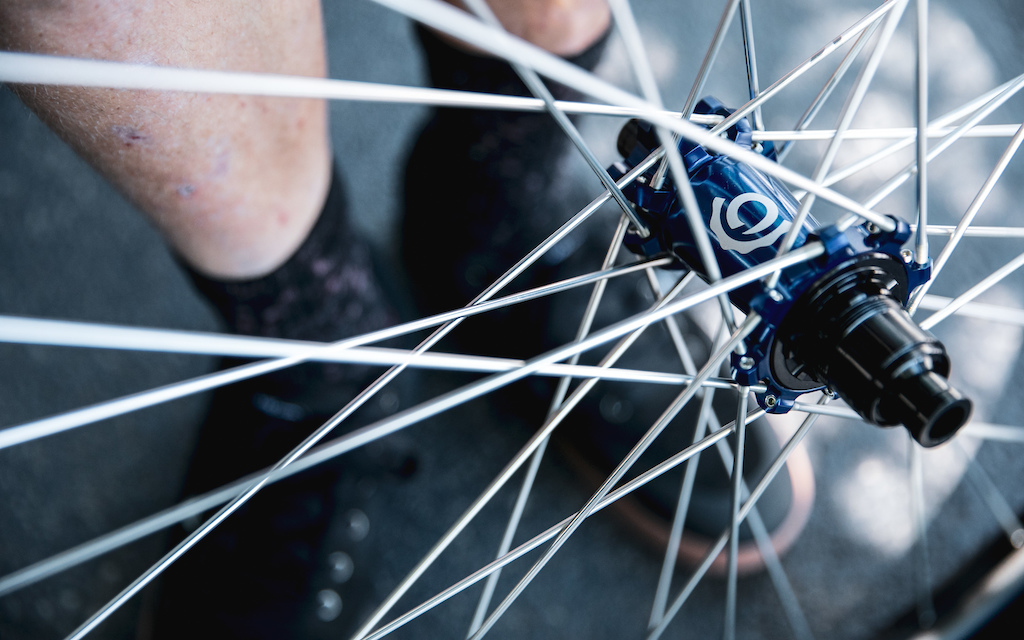 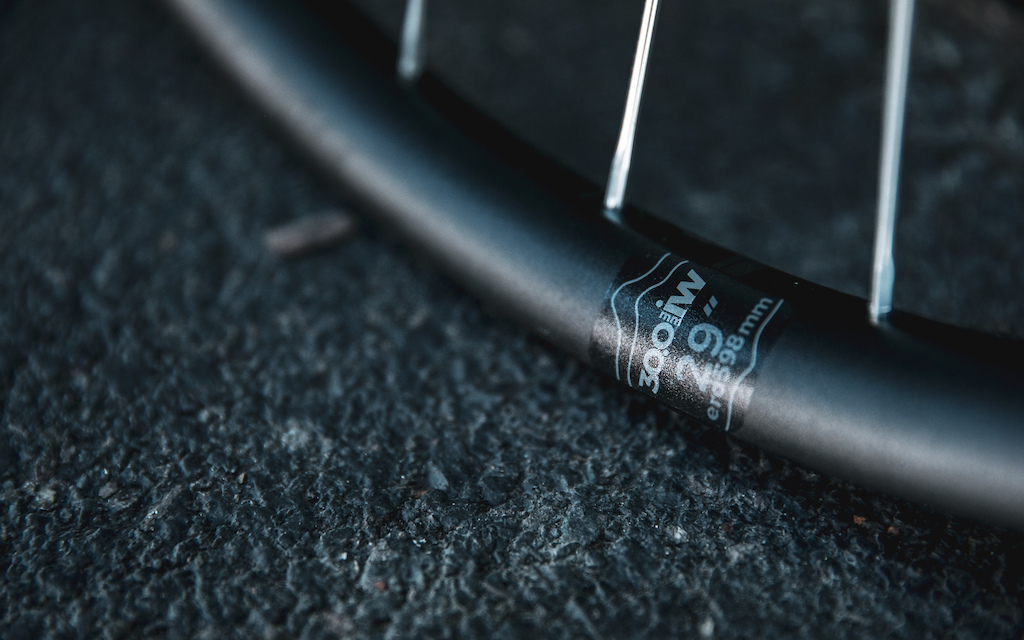 The night before the first day of practice brought down some heavy rain making the early morning practice session a slippery one. With some freshly tilled sections and wet grass corners, the first few laps on the track were all about feeling out the conditions. As we saw on track walk, the course here at Snowshoe had been turned up to 11. Compared to an ordinary Snowshoe race track, for the World Cup, the jumps were built much bigger, the course was taped wider, and more and more line options were opened up from top to bottom. The top part of the track was fast and all about being aggressive and attacking each section. On the second half of the track, I had to be much more precise and let the bike work underneath me even when sliding on wet and slippery rocks.

Even though I knew the layout of the course and have raced this track before, it was important to have an open mind throughout practice and not just jump right in to the same lines I've ridden from years past. Every race is a new opportunity to read and study the course and this weekend was no different. Thursday's practice session gives you 3 hours and 15 minutes of practice. For me, I was planning on getting 6 runs in total, with the last two being full runs up to speed. 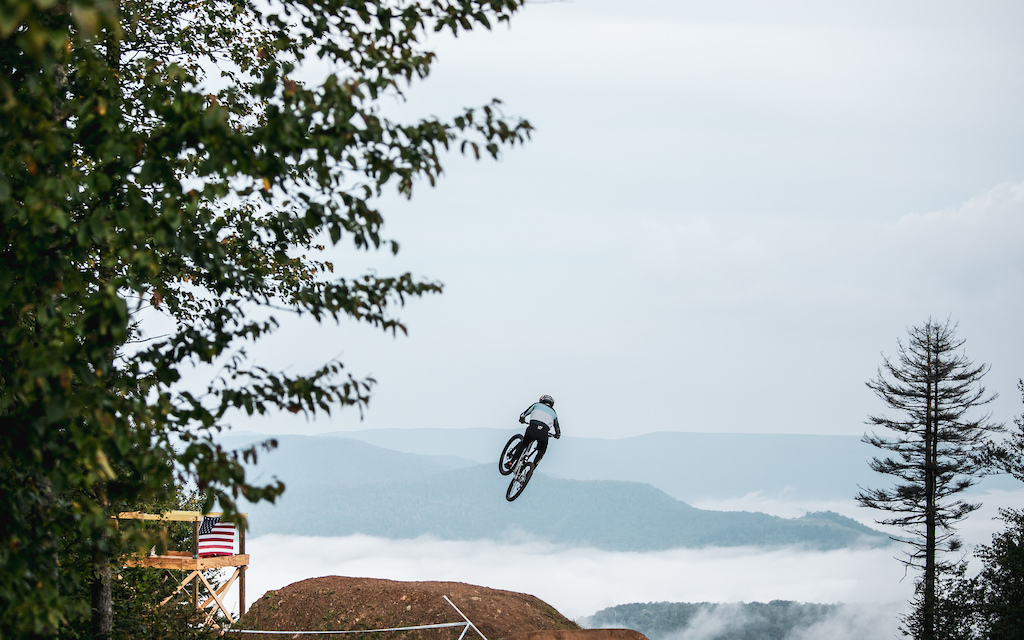 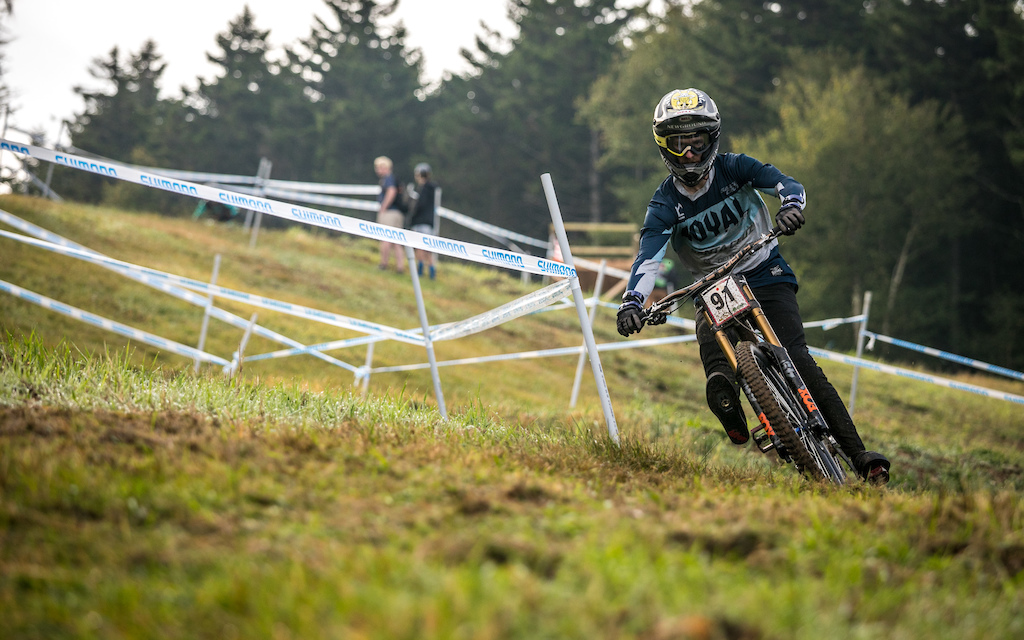 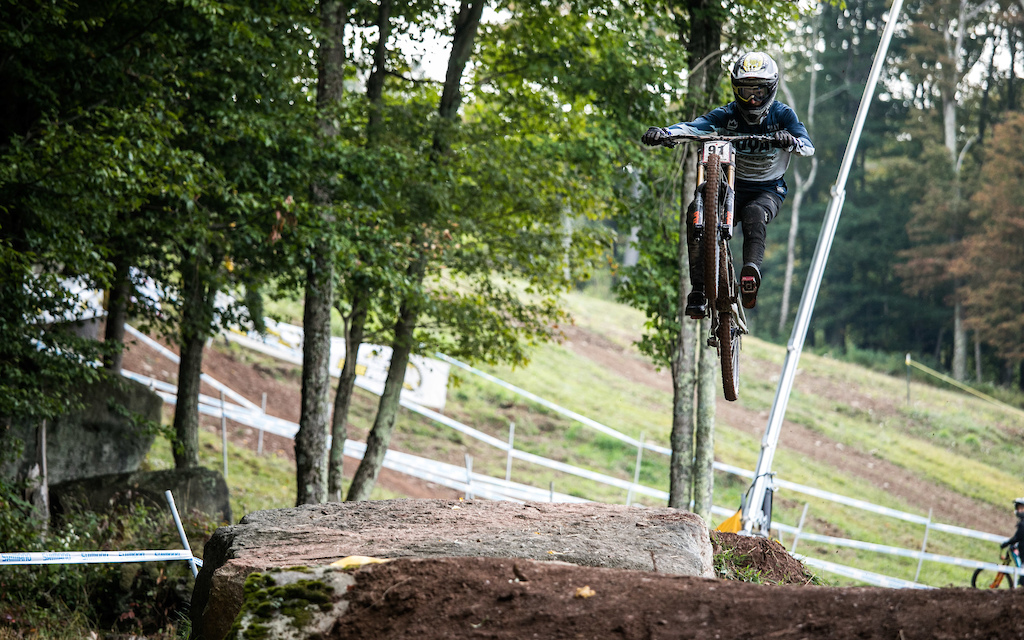 The last practice session before qualifying started with heavy fog. The fog was so thick that is was tough to even spot the landing of some of the jumps as you were coming off the lip. The track was still slippery and some sections unpredictable. Friday morning's practice gave me enough time for three runs and a chance to make any adjustments on lines after day one. With so many talented riders attacking the track throughout the whole weekend, the lines were beginning to breakdown, and in some places new rocks started to come out. Being able to adapt and ride different lines with confidence without much practice is what separates the top riders from the rest. 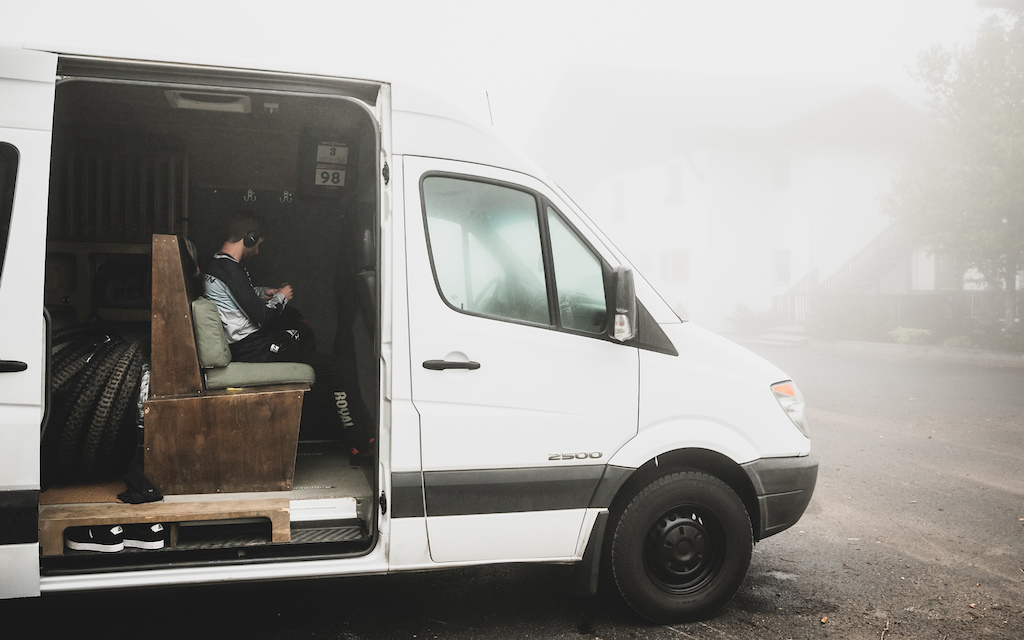 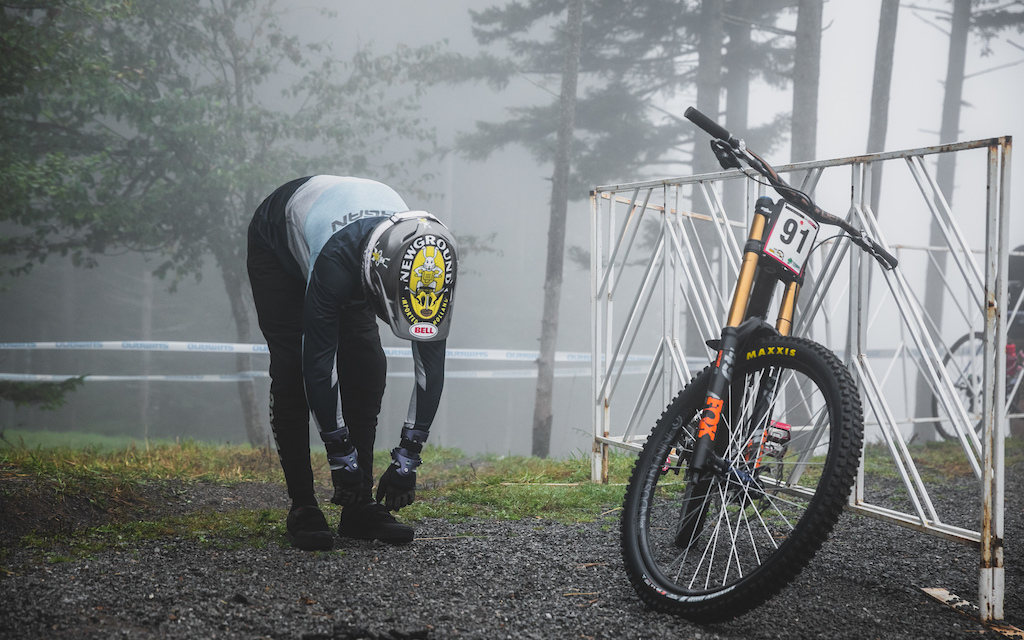 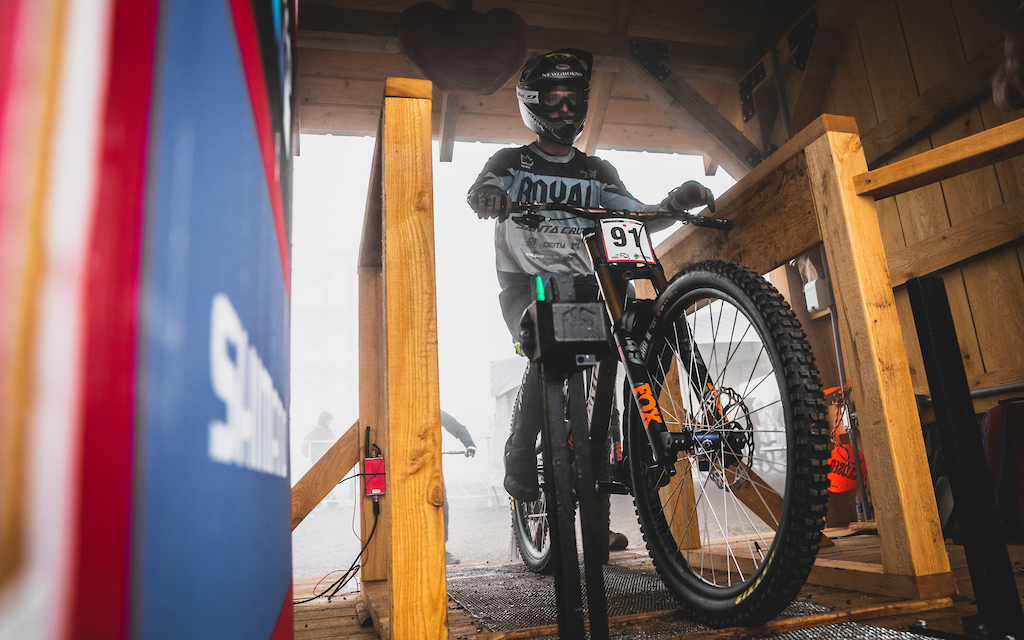 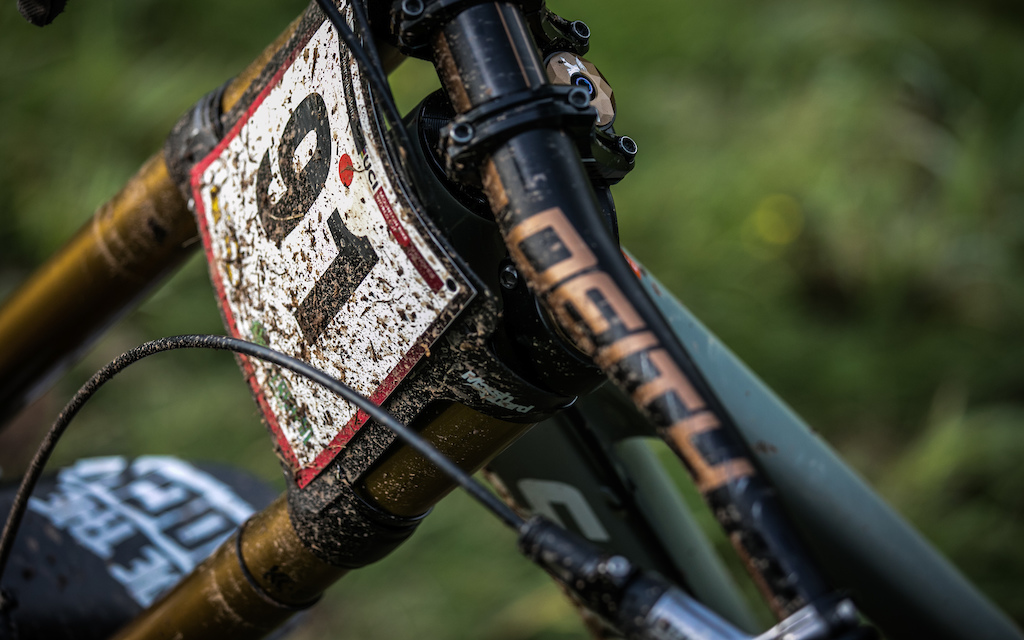 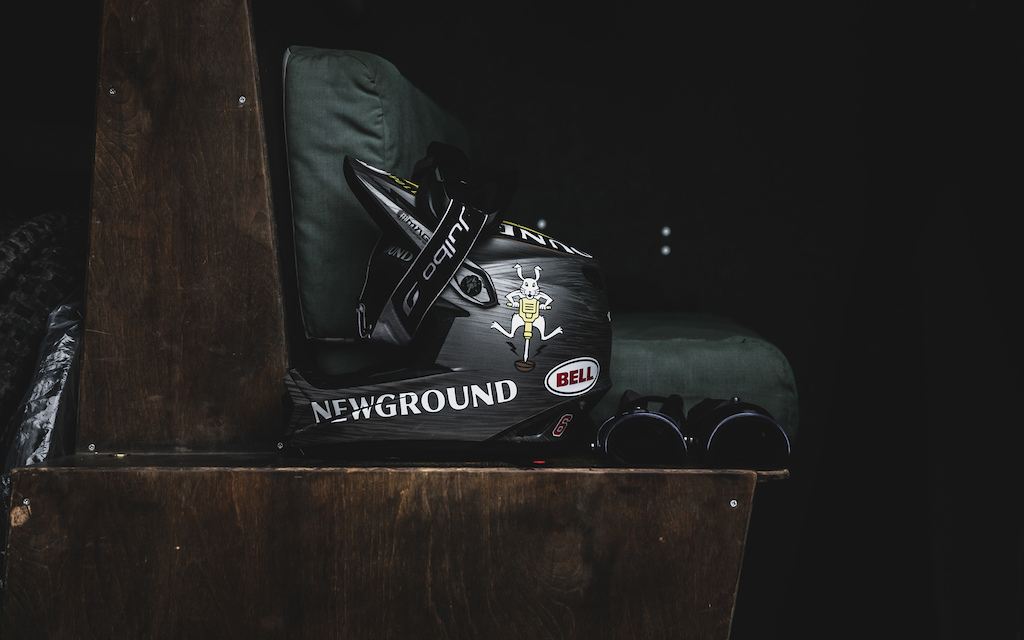 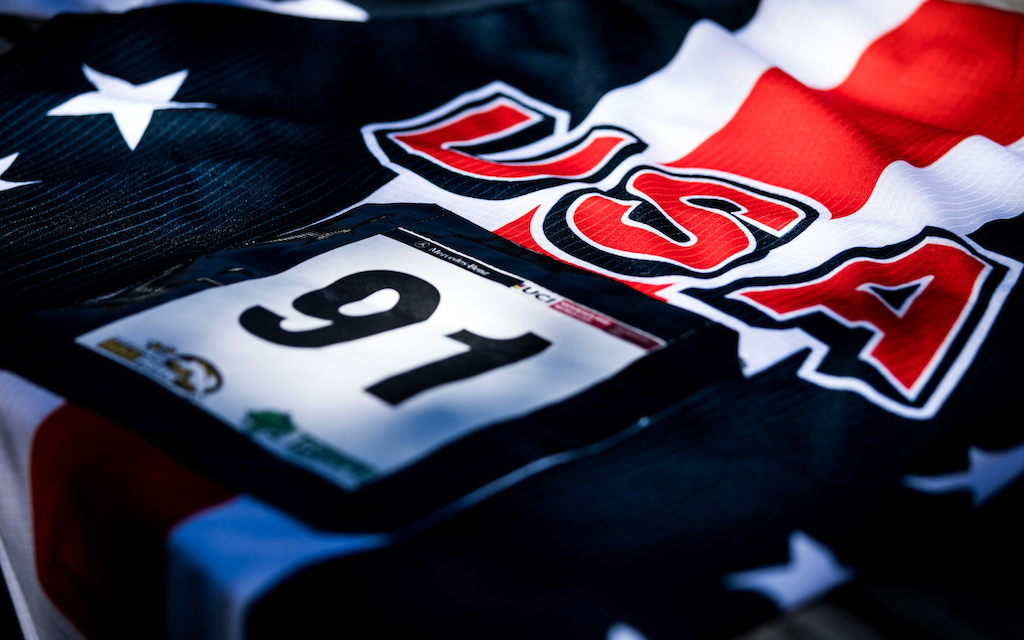 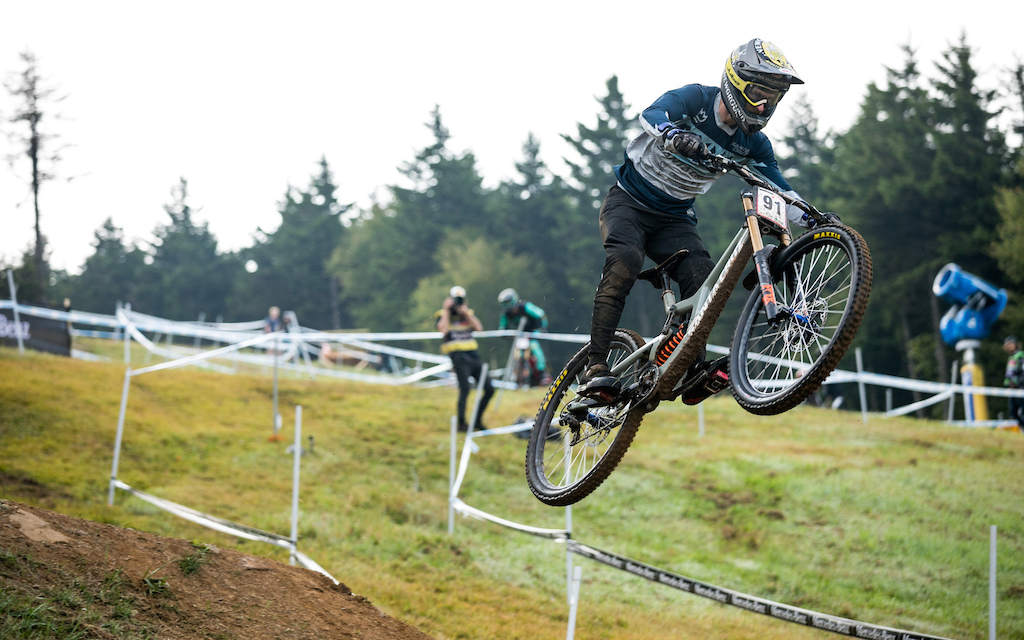 The track was much dryer by the time my 2:39 qualifying start time came around. Right away, I knew it was safe to let it hang out and go for it a bit more than how the course was running earlier in the morning. I was the 80th rider to drop down the course and needed to finish inside the top 60 to qualify for Saturday's final. I crossed the line with a time of 3:26.713 slotting into 62nd place. In the end, I missed the cut by only 0.322 of a second. This was a tough pill to swallow and not the way I wanted to finish out the year. I gave it everything I had, made a few small mistakes during my run, but left everything out on the course. That in itself felt like an achievement and is something I have learned to be proud of.

After just missing the cut during qualifying, sitting on the sidelines to watch Saturday's gave me a mix of emotions. At first, it was tough to even watch practice without feeling like I was missing out on something, but being an American at what felt like a home race, it was great to feel and receive so much support from family, friends, competitors, and spectators out on the hill. It helps you remember that finishing 62nd in the world isn't too shabby regardless of what level you are on or what your goals are. The mountain bike community is strong and I am happy to be a part of this incredible sport. 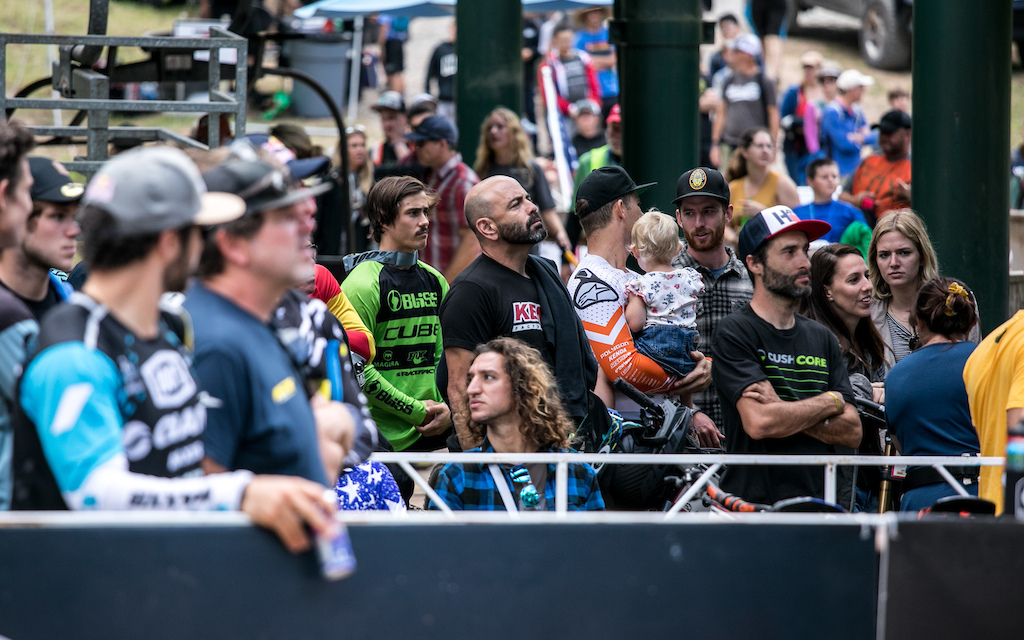 Everyone was locked to the screen as times started ticking lower and lower
The U.S. crowd showed up big time for the downhill finals. It was really impressive to see how many people were lining the track all the way down the mountain. I've never seen so many people at any mountain bike race in the United States! Because Snowshoe is somewhat remote, all the fans that made the trip out to watch the race were all avid fans of the sport. Everyone was loving the action, and with dry conditions for Saturday, the race was looking like it was going to come down to the wire. The combination of educated fans, a great racetrack that seemed to be liked by all of the riders, and a series overall that came down to just over a second made for what some described as "the best downhill race ever". 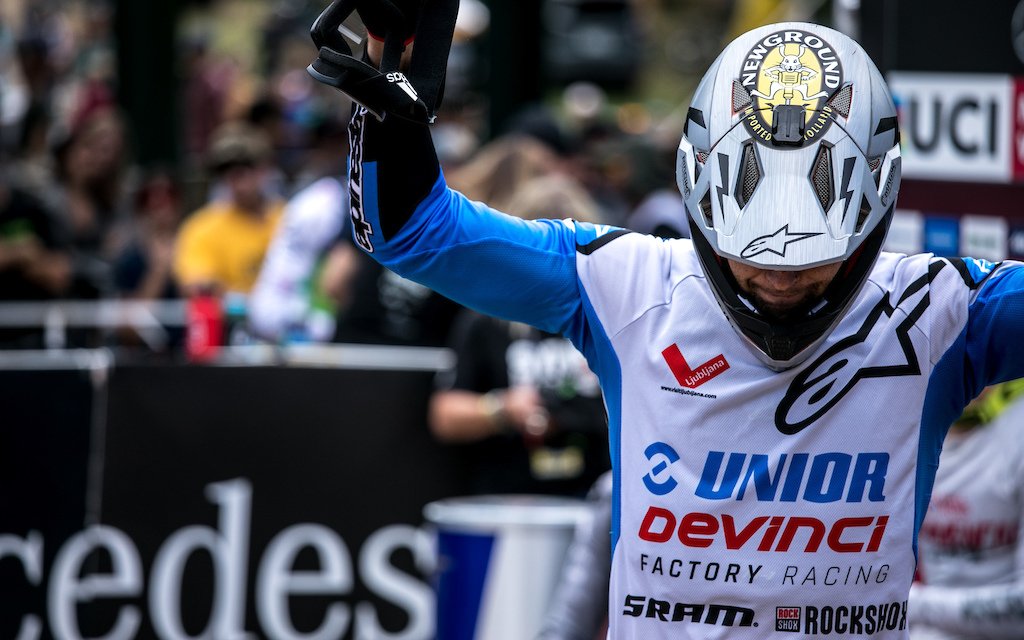 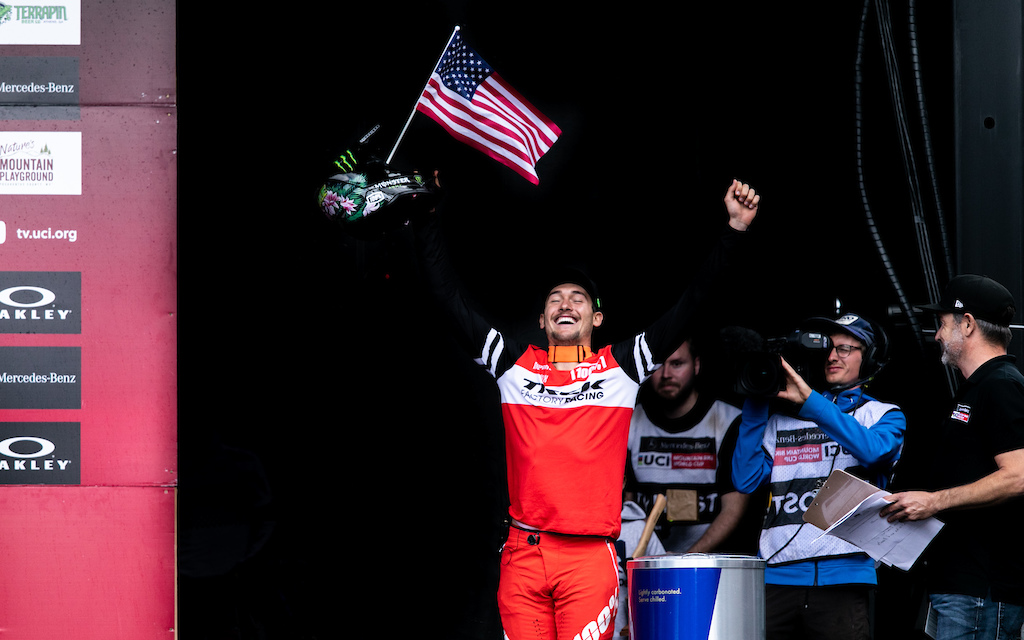 American Charlie Harrison with a career best 3rd place
After American hopeful Neko Mulally went down with a fractured leg during Thursday's practice, it was inspiring to see all of the other American riders step it up with solid finishes across the board. Bruce Klein ended the season strong with a career best finish in 16th. Luca Shaw, who has been steady all season, finished in 14th. Aaron Gwin, after separating both AC joints earlier in the year in Andorra, came back from injury with a 13th. Dakotah Norton has shown podium speed all year long and is one rider I think had one of the most impressive runs all day. With a slow start and only being 49th fastest at the first split, Dakotah clawed all the way back to 9th place. You can only wonder what could have been if Dak would have put everything together in sector one. Last but not least, Charlie Harrison also finished with a career best in 3rd. The American crowd came alive seeing Charlie up on the podium at the end of a great day of racing. The level of this sport is as high as it's ever been, and it was really amazing to see so many American riders showing up and showing out for the World Cup finals in Snowshoe. 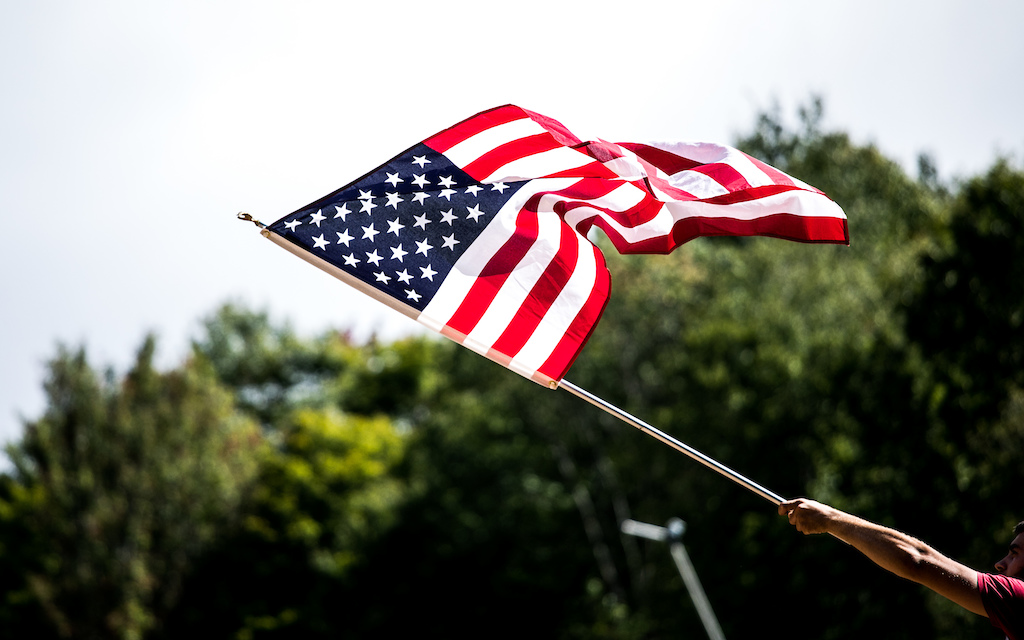 bbqmike (Sep 12, 2019 at 11:03)
It's great that you featured a rider who's working their way to get in, so much coverage only goes to the fast riders, when there are probably a ton of more interesting stories from the riders working hard to make it, even if they never will, when I look through the fanatsy rosters, I'm always wondering who most of these riders are. Maybe you could feature even just one rider from each category from outside the top ranks each round next year.

blowmyfuse (Sep 12, 2019 at 8:49)
I think the World Cuppers would have despised it. Heavy rain the night before followed by that god awful, super slick, gummy, slow rolling clay rut & mud bog hell on the flats & chunky mud stacking up on those flat rocky, rooty shallow areas trying to get pedal strokes in as your speed dies & that brutal southeast heat tries to fog your googles out & suffocate your breathing.

Could have been a slow & miserable affair.

diesel84 (Sep 12, 2019 at 16:28)
It's great to see your perspective, Max. I'd offer that it's not necessarily about "making it" or not, if you are the kind of person with talent + dedication that makes for a fascinating journey! Thanks for sharing and would love to see more.

pinnityafairy (Sep 12, 2019 at 6:11)
The track walk at Snowshoe seems much scarier than the ride down. It's much harder lots of spots to walk here than it is to ride through at warp speed. On top of everything else if you stand around and stare at this gnarly s*** it will creep in the back of your head and never leave.

tadgercat (Sep 12, 2019 at 18:55)
Great article! Particularly appreciated your getting into a bit of the nitty gritty strategy and planning you put into this wicked mind game. super cool. rooting for you in 2020 !

WoodenCrow (Sep 13, 2019 at 18:16)
Interesting read for a never-raced DH guy like myself. Thanks for the write-up, and congrats on leaving it all out there!