Riding Under the Midnight Sun at the Åre Bike Festival 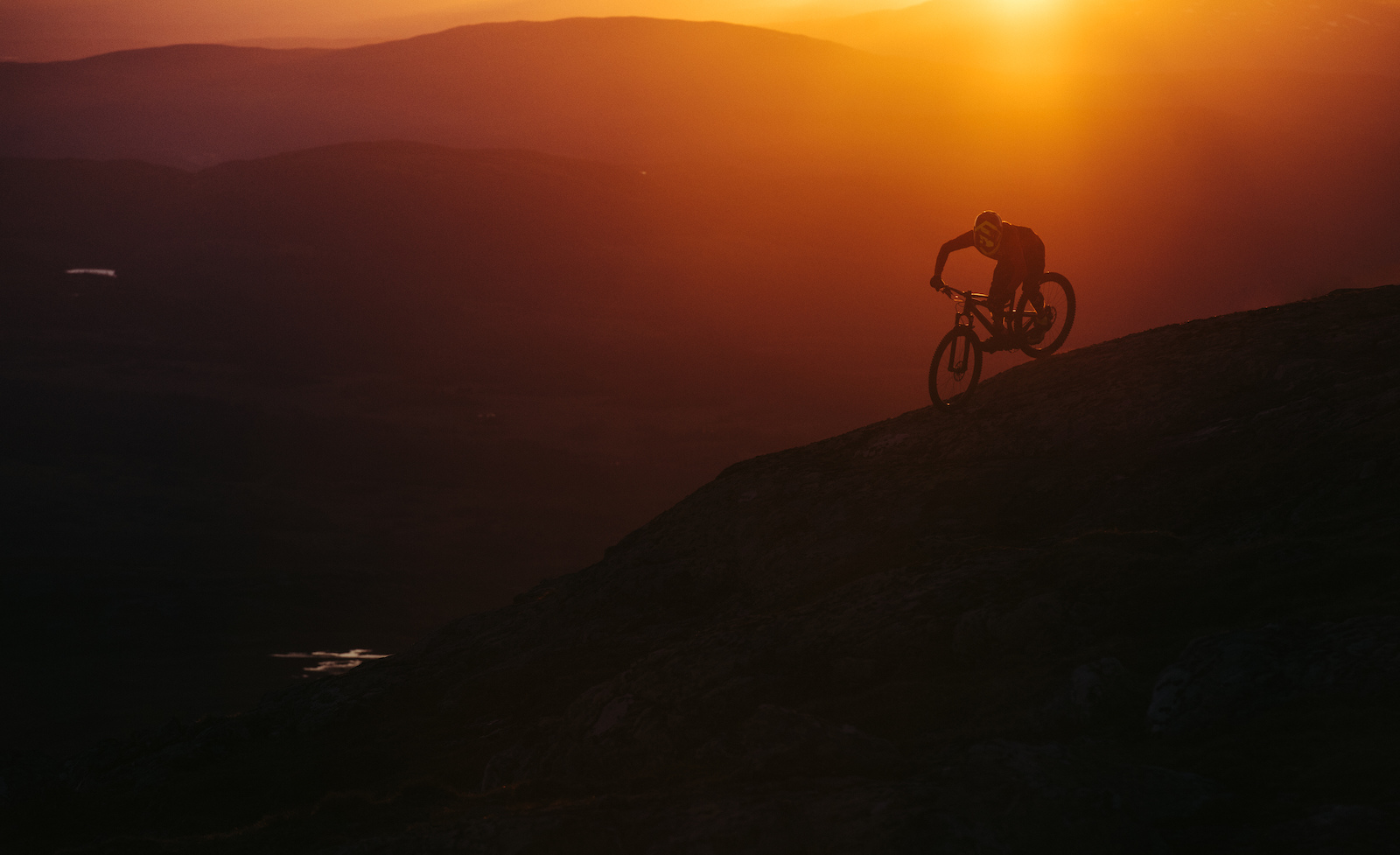 UNDER THE MIDNIGHT SUN

Sweden may not be the first country that comes to mind when you think of international mountain bike destinations. A country tucked way up north in Europe and with a big chunk of its land mass situated above the Arctic Circle, and sporting bone freezing temperatures and snow on the ground for almost half of the year... Well, that is true, there's no denying those facts. But on the other hand, roughly 69% of this sparsely populated country is covered by forests. Forests cut through by an endless number of trails...


This hotbed of Swedish, gravity fed, mountain biking is, of course, the resort town of Åre in the mid-north of the country, some 615 kilometers north of Stockholm. Come winter, this tiny village, boasts one of the biggest ski resorts in Europe outside the Alps (and to be honest, with some of the most intricate snow on the planet) and is a regular stop for the FIS alpine World Cup. However, people started riding bikes down the mountain in the early 90's - on rigid hardtails wearing lycra and styrofoam helmets no less. The first dedicated freeride trail on Mount Åreskutan, 1000-metersleden, was built as far back as in 1996 by a crew of local riders. The big boost for biking in Åre came when the village played host to the 1999 world champs, which, at a time when mountain biking was at it's absolute peak commercially, was great for the area. Some 30,000 fans showed up to watch an event made eternal through gold medal-favorite Shaun Palmer eating dust five meters from the finish line, crawling across it and missing out on a certain medal in the last race of his professional bike career. Oh, and Nico Vouilloz and Anne-Caroline Chausson won the DH gold medals, as per usual...


The world champs were the starting point for an ever increasing focus on creating a sustainable product in the summer time, and in 2005 the Åre Bike Park opened up for the first time as one of the first serious bike parks in Europe. Lift accessed biking had been around before though, but not in a commercial package. At the same time, the iconic Mountain Mayhem Festival created havoc on the mountain every summer. In 2003, Freeride Entertainment showed up in the valley to shoot for New World Disorder IV with Cedric Gracia (who at one point even owned a house in the village) and Kyle Strait going huge in front of the lens.


After the Mayhem festival disbanded, local bike club Åre Bergscyklister decided to pick up the gauntlet and put together a festival in their own name - the Åre Bike Festival in 2010. The vision was to create a grassroots event with an international touch. Today, the bike club has roughly 800 members in a valley of less than 3000 inhabitants, with the festival as the focal point every year. This year marked the seventh edition of the festival, with no signs of slowing down any time soon. The festival consists of five days of competitions, social rides, pro clinics, and of course, the odd party... this is Sweden after all.

The first event of the festival was an, oddly named, the XC hillsprint, which started from the village square to the top of the Fjallgardsexpressen chair lift. With 409 grueling vertical meters on insanely steep and loose gravel, access, roads. Swedish World Cup racer Mathias Wengelin showed that he's more than well prepared to tackle pain and stormed to victory. Freshly crowned junior XC-world champ, Ida Jansson, took the win among the ladies, wearing her rainbow stripes for the occasion.

Ok, we admit it, the idea behind this comp was stolen entirely from the annual BoXXer world champs. But hey, when it's put on by former national team, world champs, mechanic and Klas Hägg... it's ok. The Parkvillan pub and micro brewery was the scene for this historic event that saw 12 invited bike mechanics from all over the country duke it out for fame and glory, and a guaranteed hangover the next day for the guys in the final. The task at hand was easy, service a RockShox BoXXer RC and drink a can of PBR faster than your competitor. We probably shouldn't mention the guy from Öhlin's who managed to partially break one of the forks in his heat, so we won't... 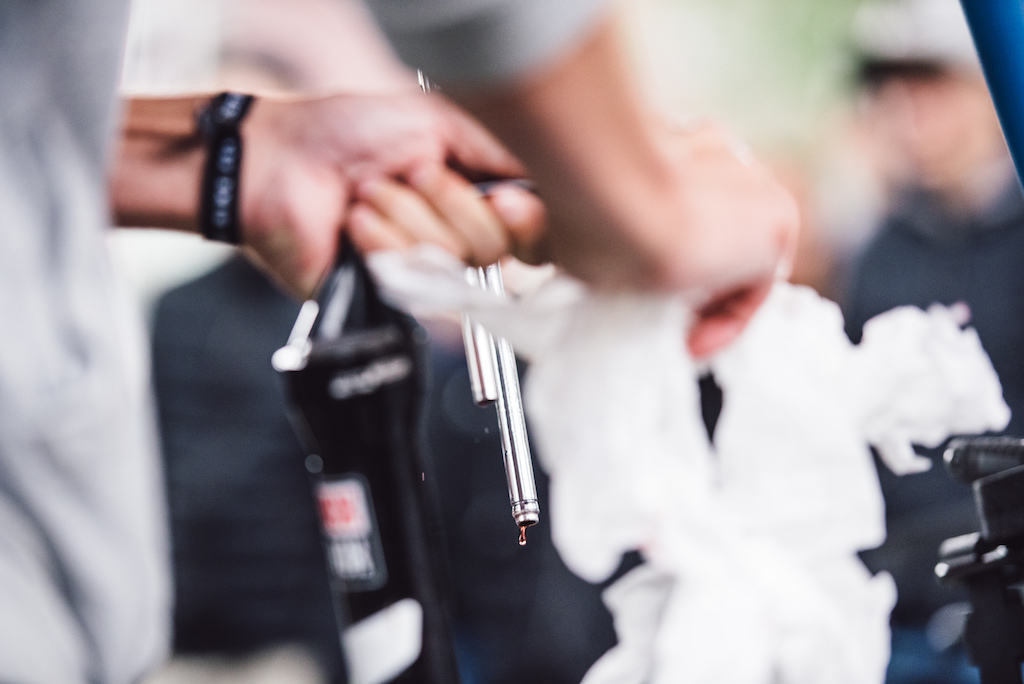 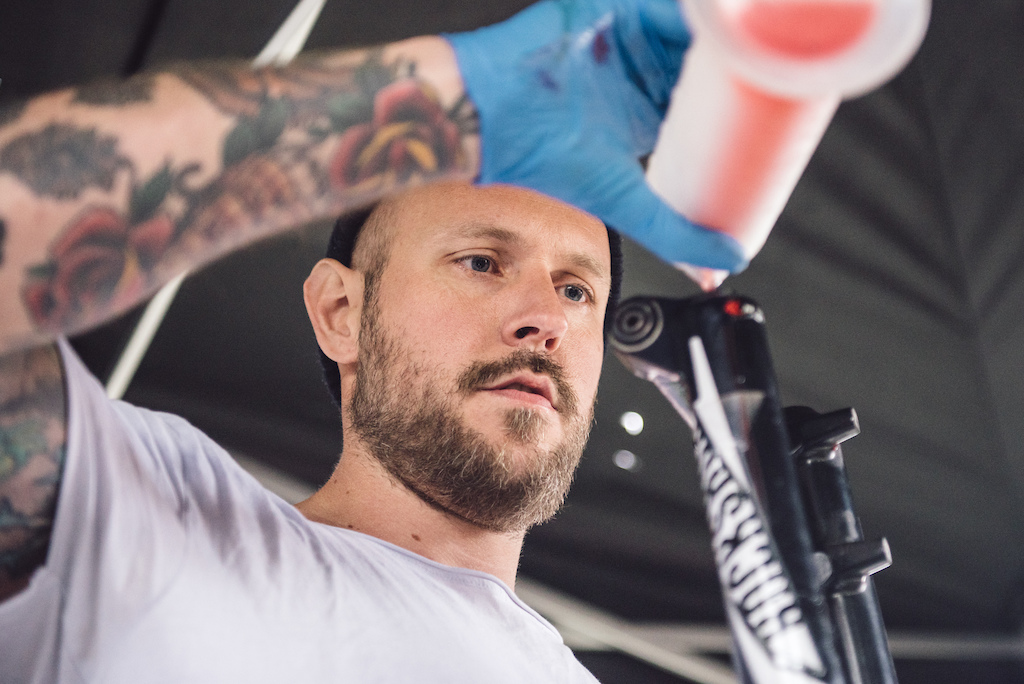 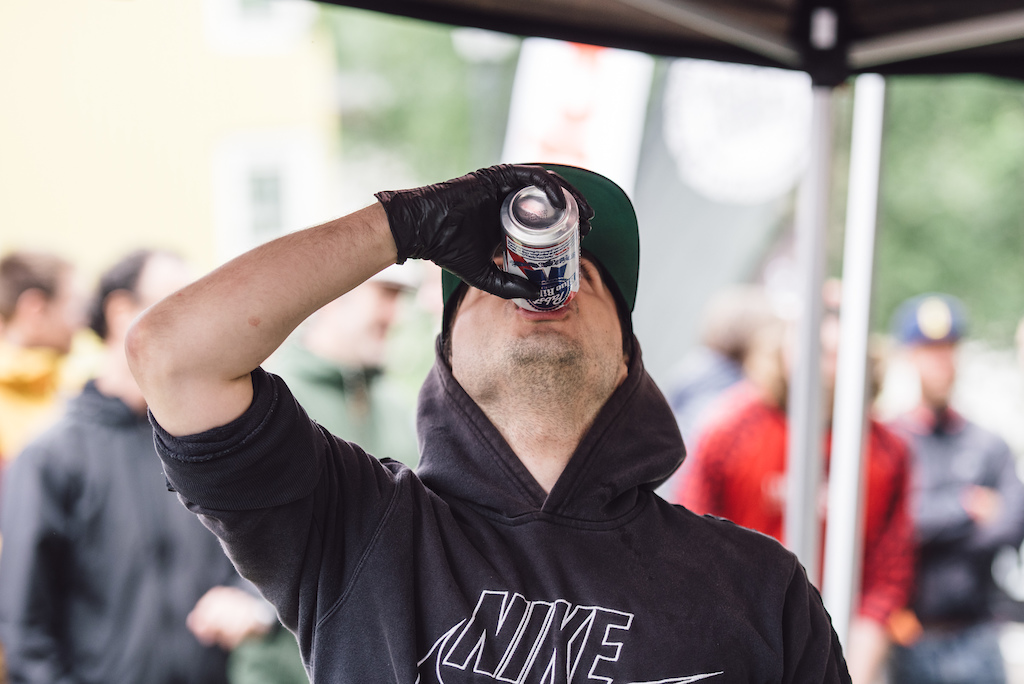 No PBR's were left undowned during the comp. 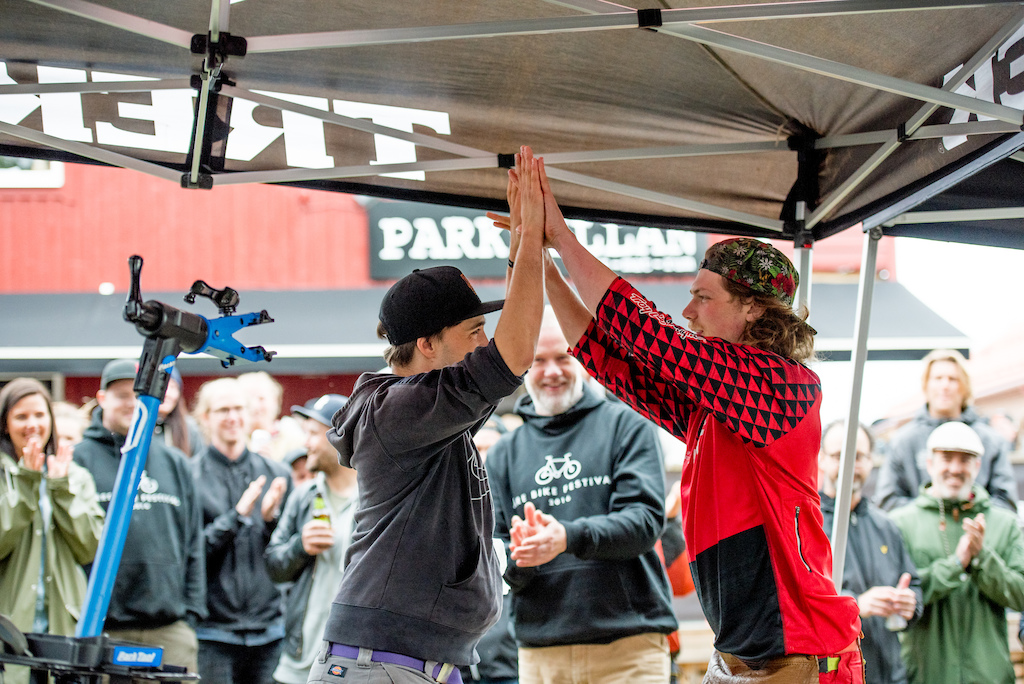 Åre is situated some 380 kilometers south of the Arctic Circle and doesn't have the midnight sun per definition. But it's still bright enough to be able to ride your bike at midnight should you wish. For two nights, the aerial tram re-opened at 10.30 PM for two hours to bring around 200 bike riders to the top of the bike park. The weather cleared, and the wind died off, just in time to deliver a stunning scenery with blood-red, glowing skies, aided by the help of fire beacons placed along the way. Epic in the very sense of the word. 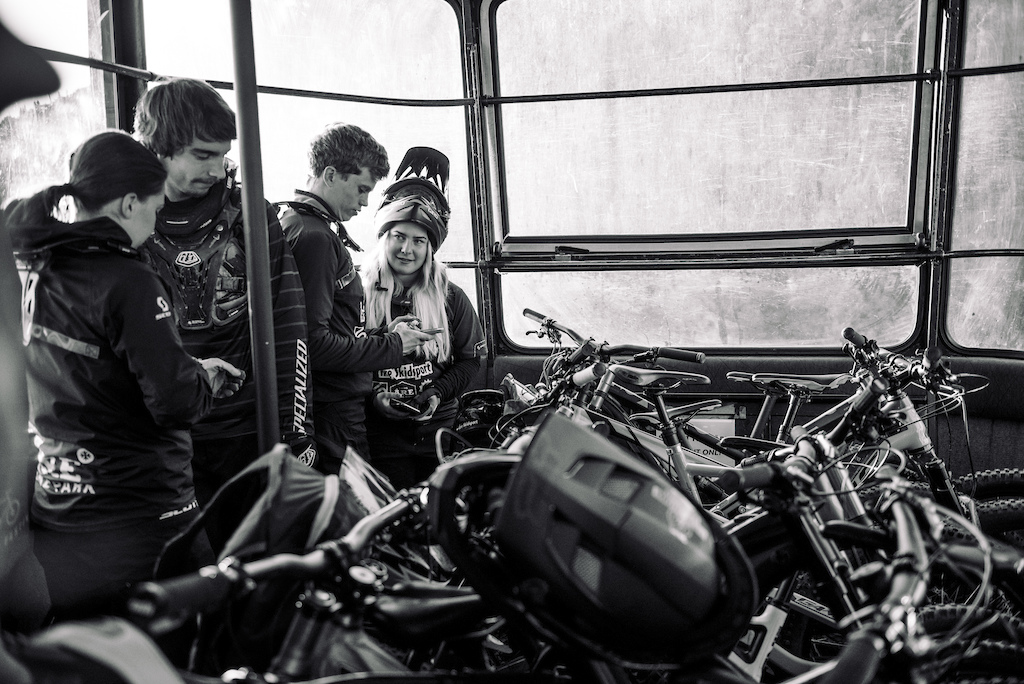 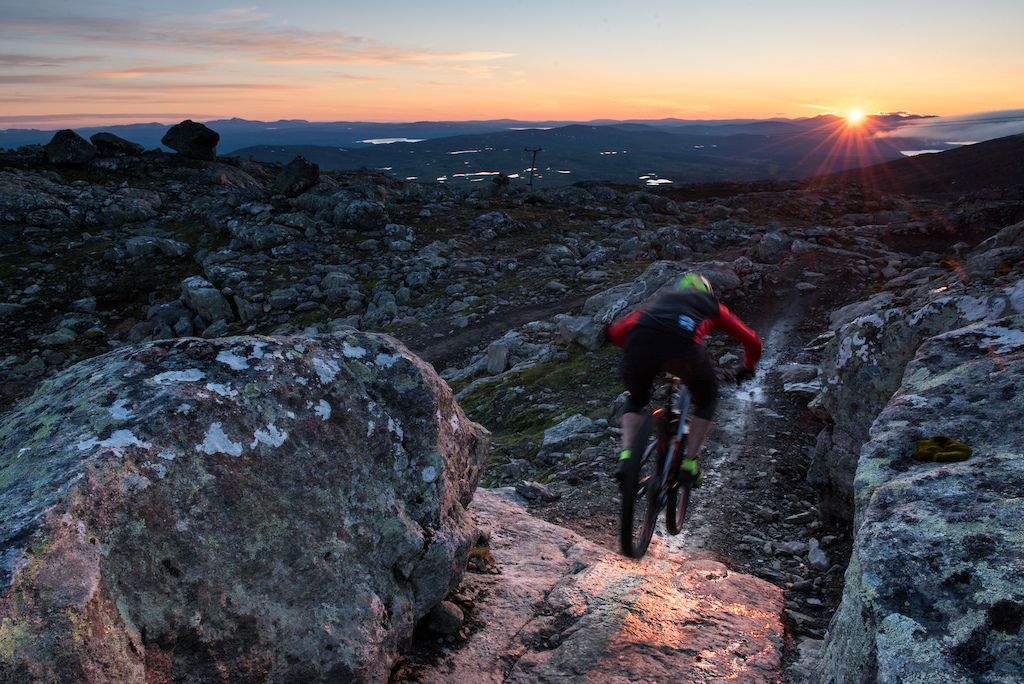 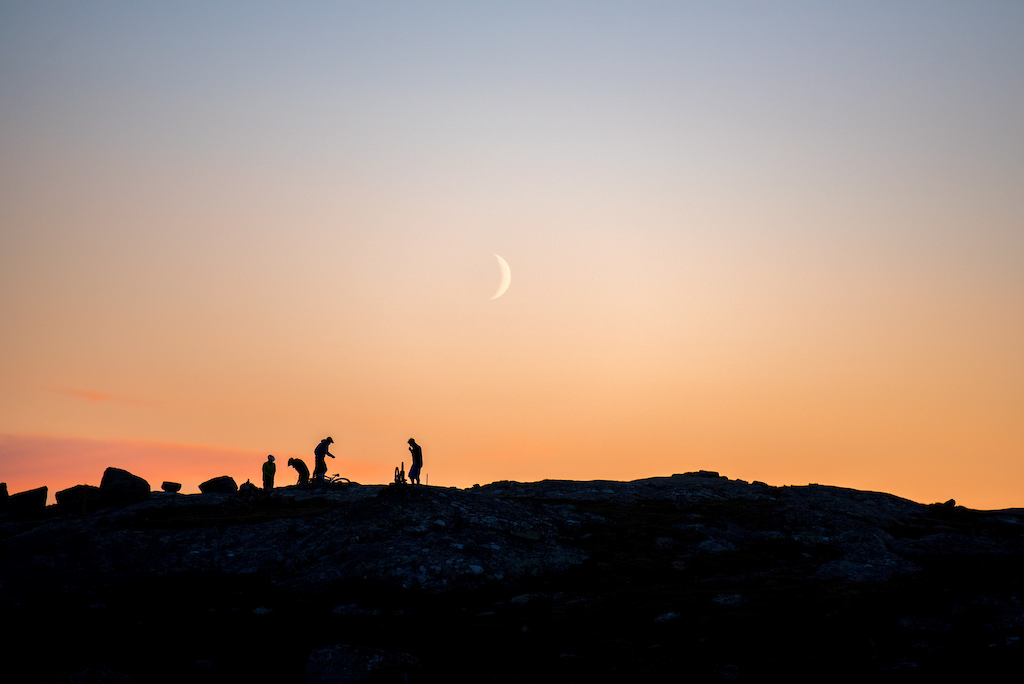 What's better than being able to ride your bike at midnight? 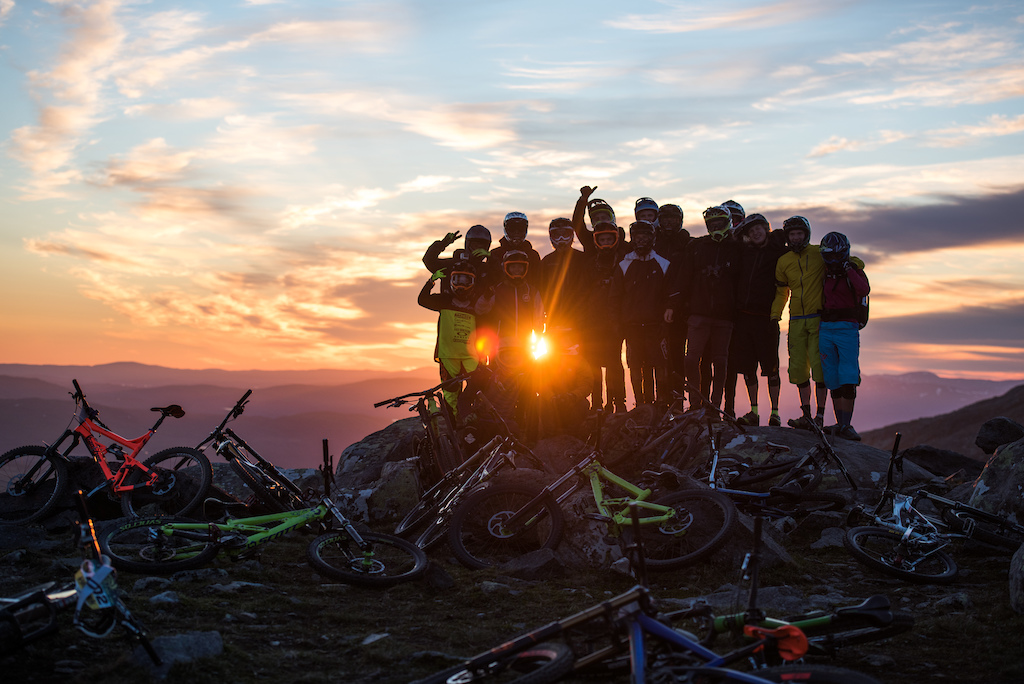 Doing it with your friends of course!
Åre Enduro by Sweet Protection.

Friday marked the historic day of the first ever Swedish championship in enduro. The competition was, however, open to riders of other nationalities as well and come race morning, almost 200 racers showed up to duke it out over five stages in the Åre Bike Park during one gruelling day. Strong winds during the days before the race had kept the upper trails closed, whereby the race organizers deemed it to be too risky to let people race the rugged alpine trails blind. Therefore Stage 1 was shortened slightly from the 15-minute monster it was supposed to be, to a slightly shorter 10-minute one. The course was brutal enough with 1300-meters of pedal assisted climbing, alongside three chairlift rides, and 220 meters of descending.

An unusually dry spring and summer had caused the trails to be extremely dusty and thoroughly blown out in some places, which made the task at hand even more challenging. EWS racer, Robin Wallner (Ibis Cycles), showed once again that he's the best gravity rider in Scandinavia by taking the win by a small margin over second placed, Alexander Kangas. Robin was 15-seconds behind before the last stage but managed to pull it all together and reel it all back in. 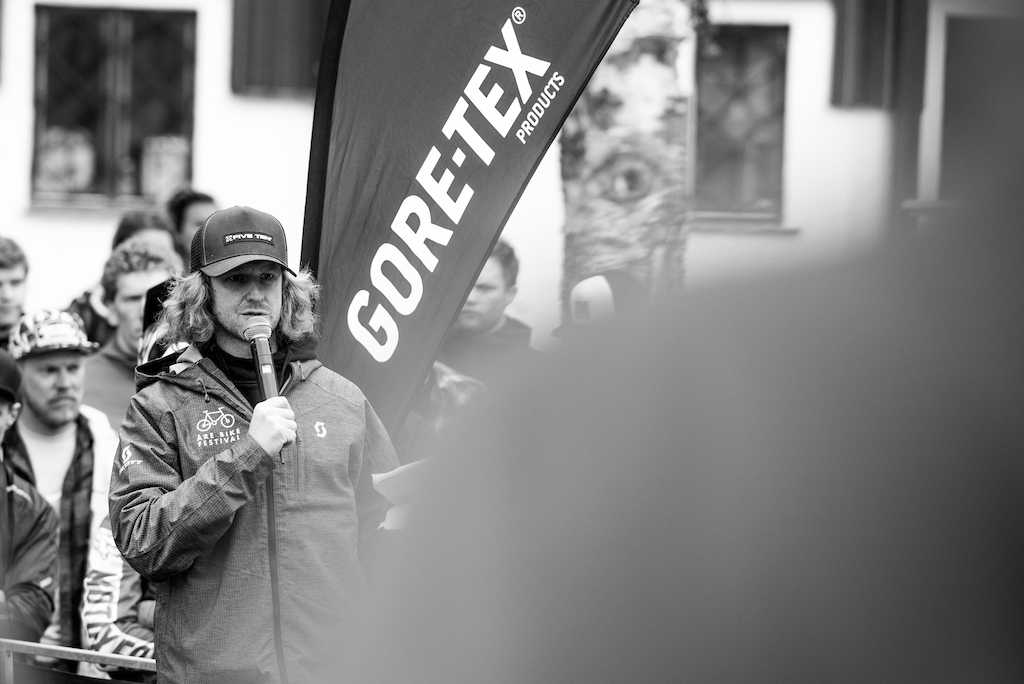 Race director Andy White is Sweden's version of Enrico Guala or Chris Ball. The man with the enduro plan. 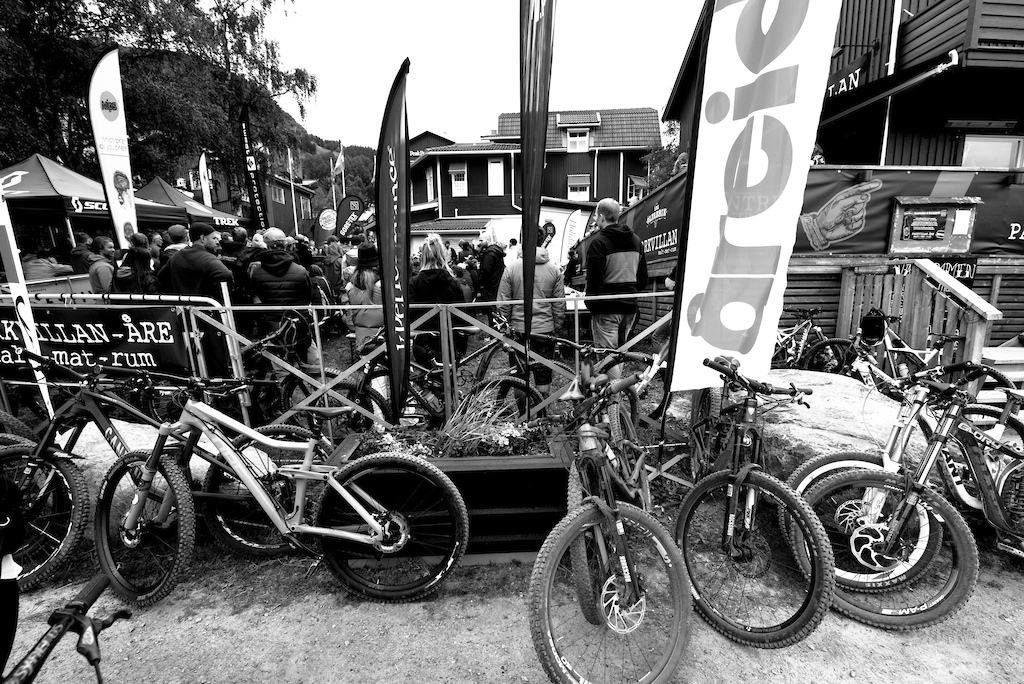 Pre-race meeting and beers at Parkvillan. 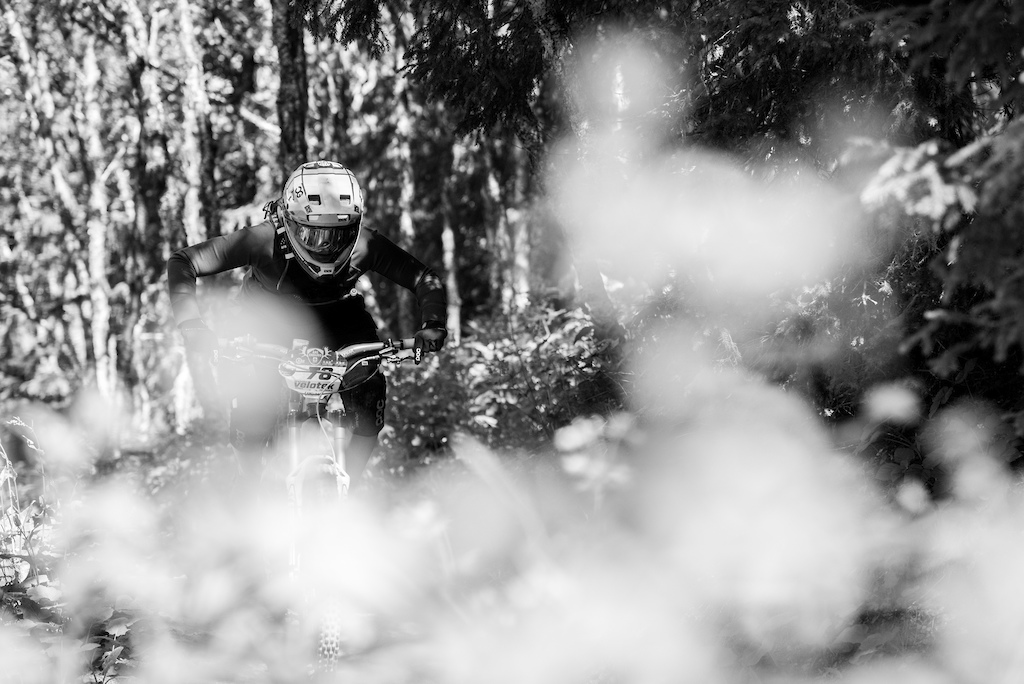 Alice Grindheim grinding it out. 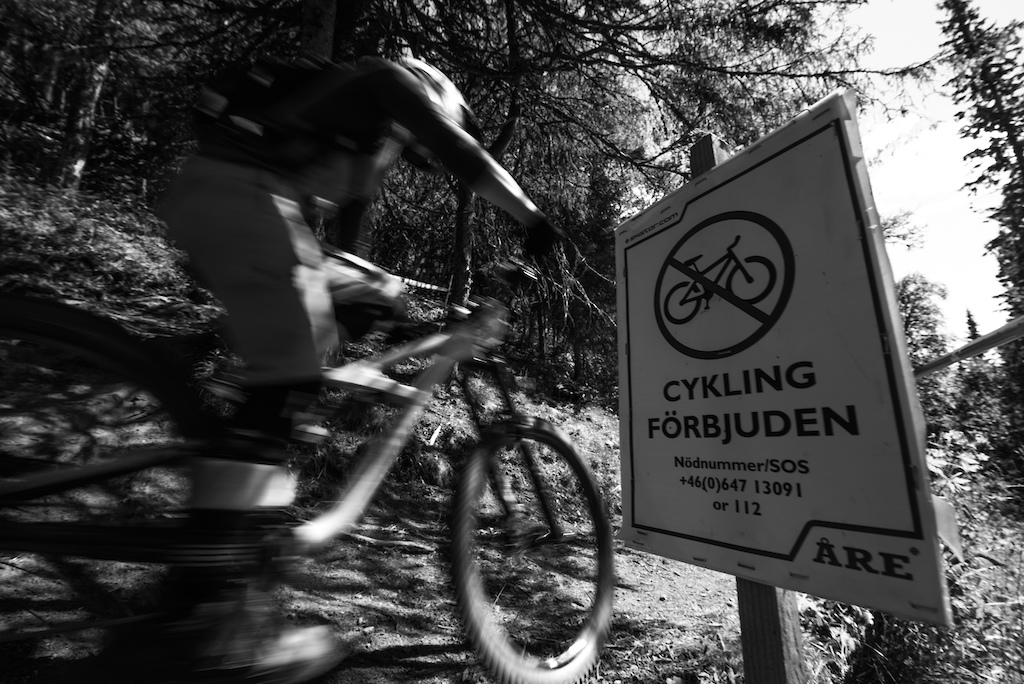 This race was a chance to ride some trails that aren't normally open for biking. 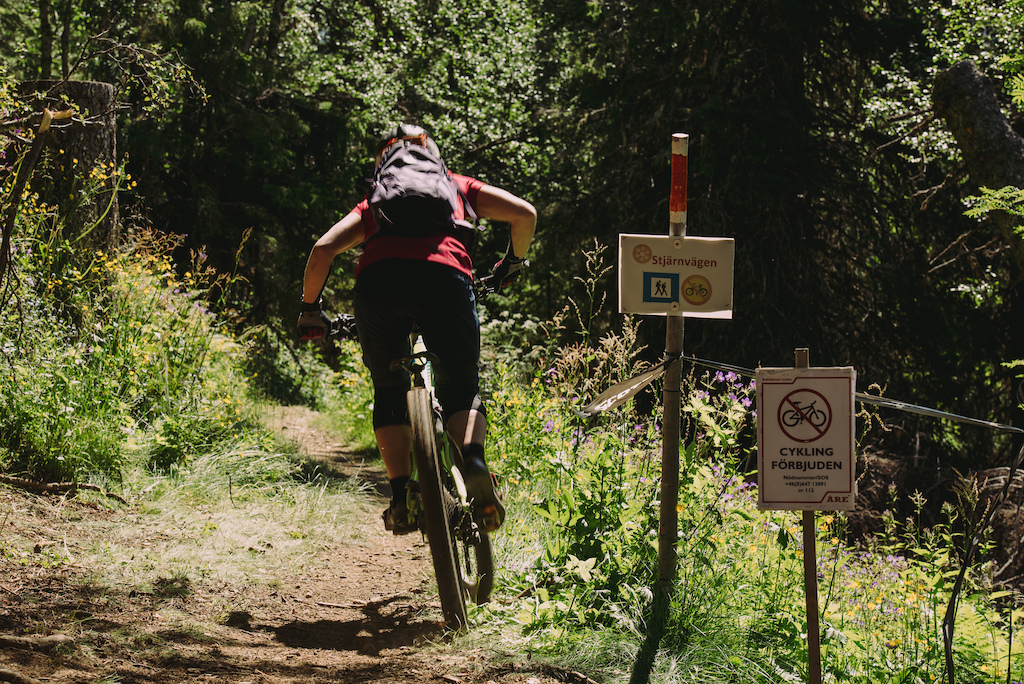 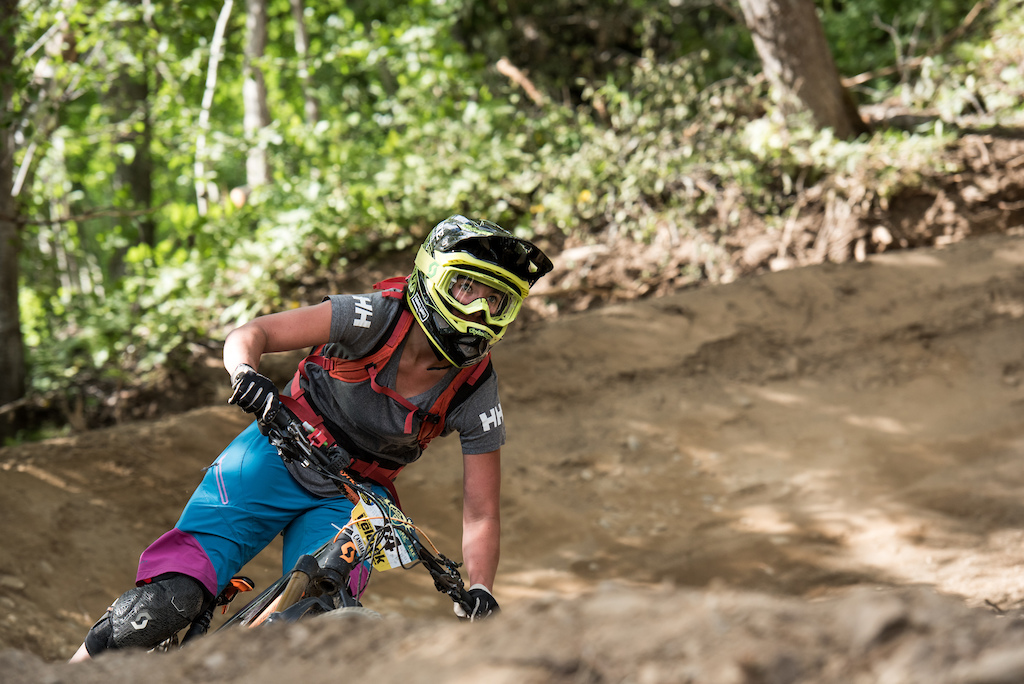 Jaclyn Paaso teeing up for the biggest jump on the course.

"I knew I was behind coming into the last stage so I just had to give it everything. It was extremely hard with the headwind on the first part and I was almost completely worked after only two minutes, but I managed to hold it together and snatch the win" - Robin Wallner, men's winner. 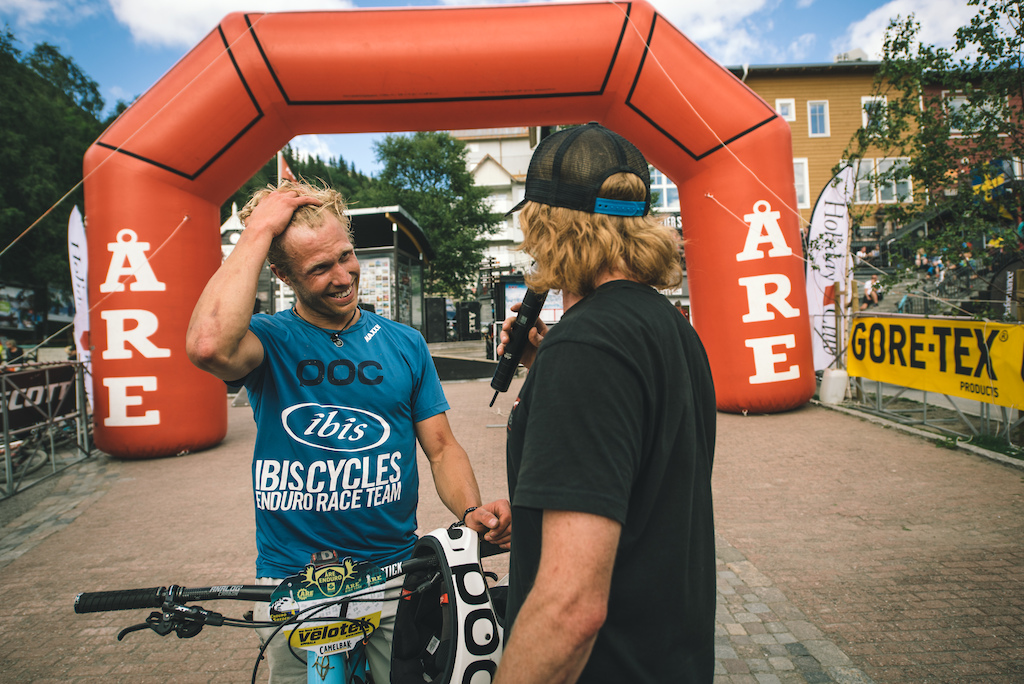 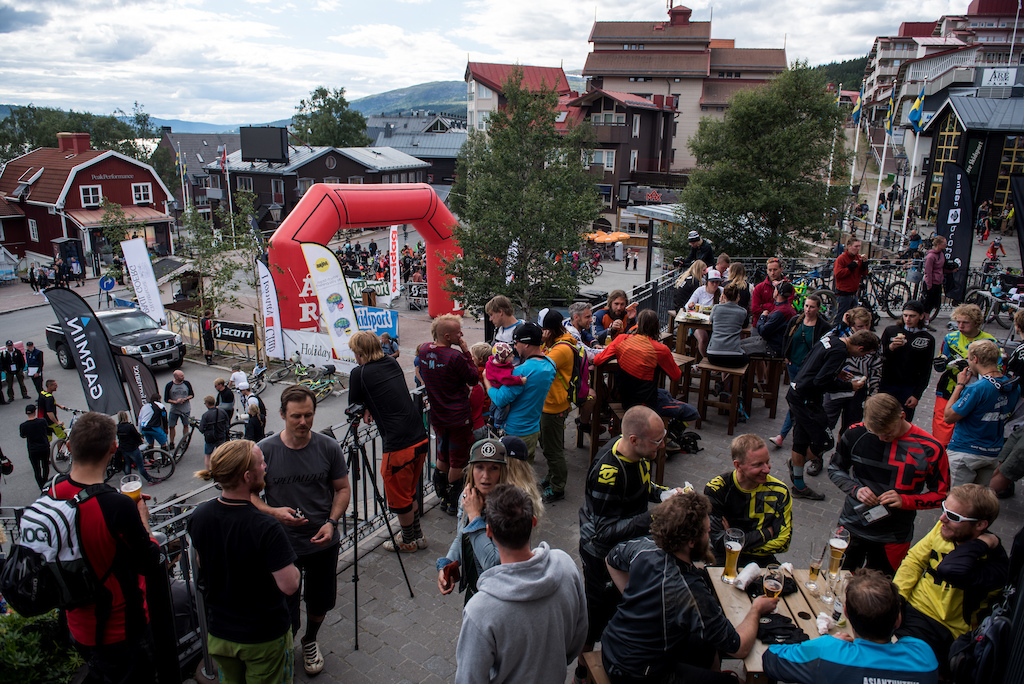 Post-race beers at the Dahlbom terrace. 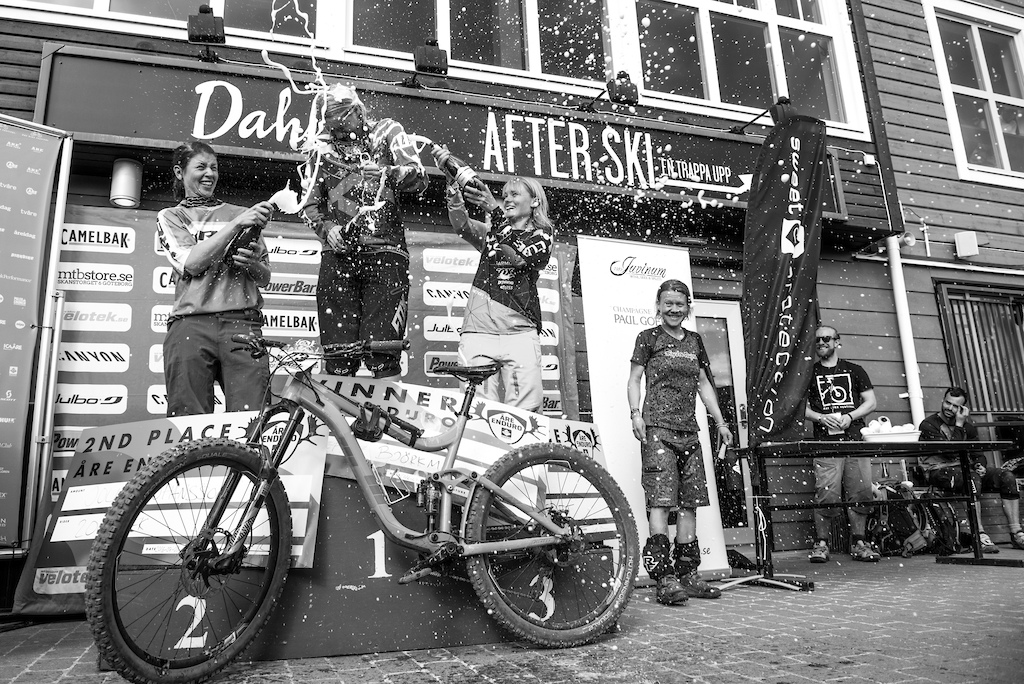 The women's podium got just as champagne rowdy... 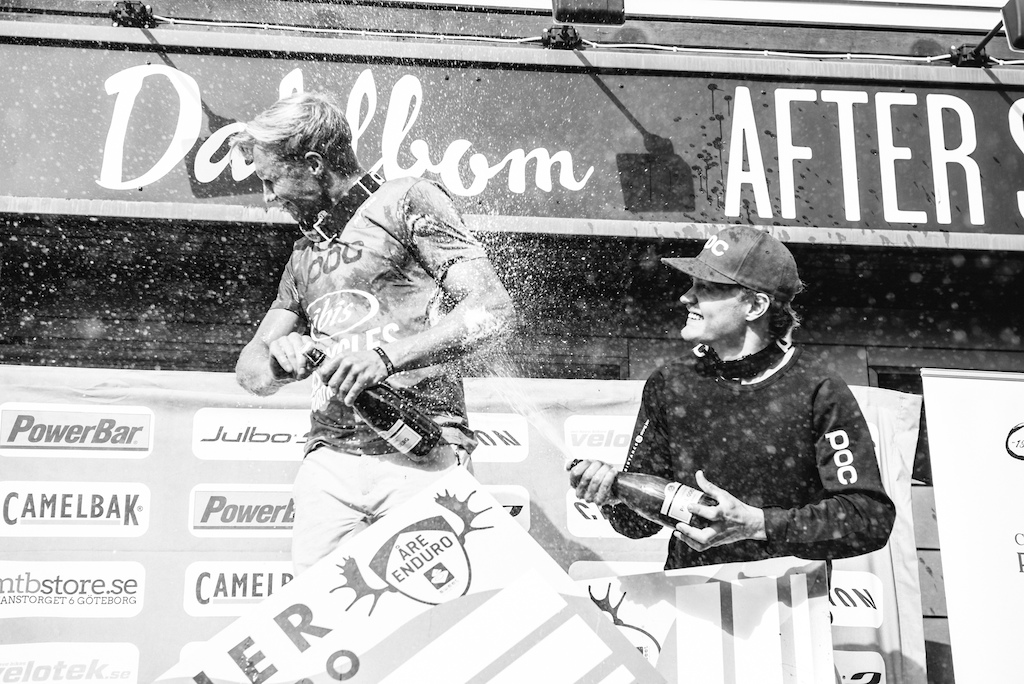 ...as the men's one.
Results Åre Enduro by Sweet Protection

Åre's whip contest was actually held for the first time back in 2010, a month before Sven Martin and his crew hosted their first 'Whip Off World's' during Crankworx Whistler. For this year the local bike club helped fund a big Hollywood sender by the bottom of the bike park. A massive crowd showed up, armed with chainsaws and vuvuzelas, to watch the riders throw it sideways. Gusty winds made jumping a bit treacherous but we still got to see everything from massive whips to the odd backflip-to-the-head being laid down. Local youngster Per-Arnt Solem showed the pros how it's done and walked away with the win while Robin Wallner won the people's choice award. 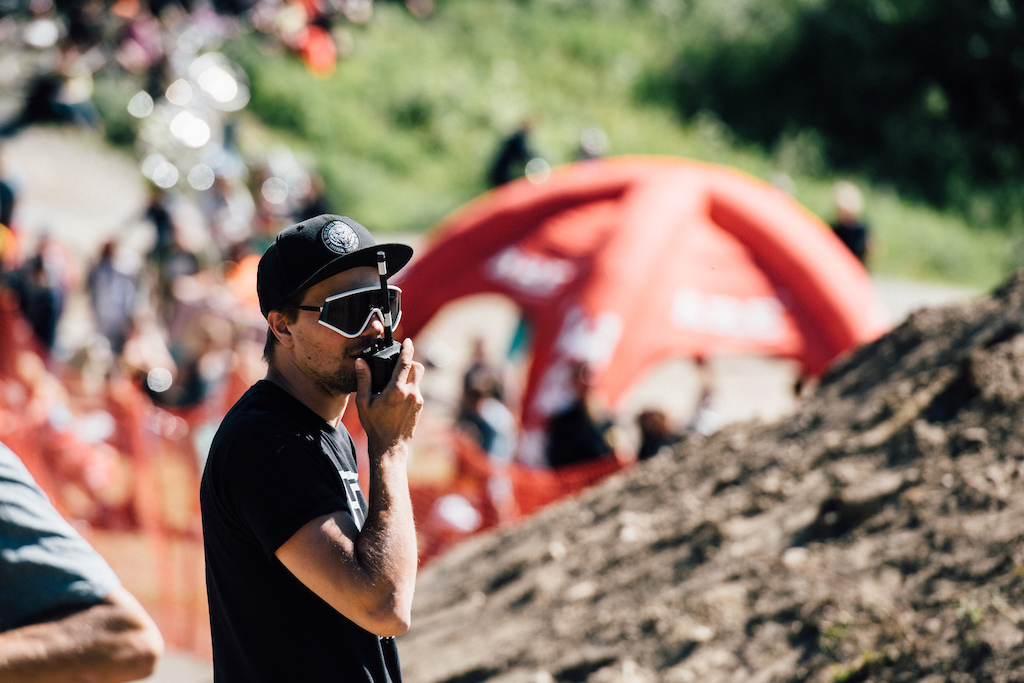 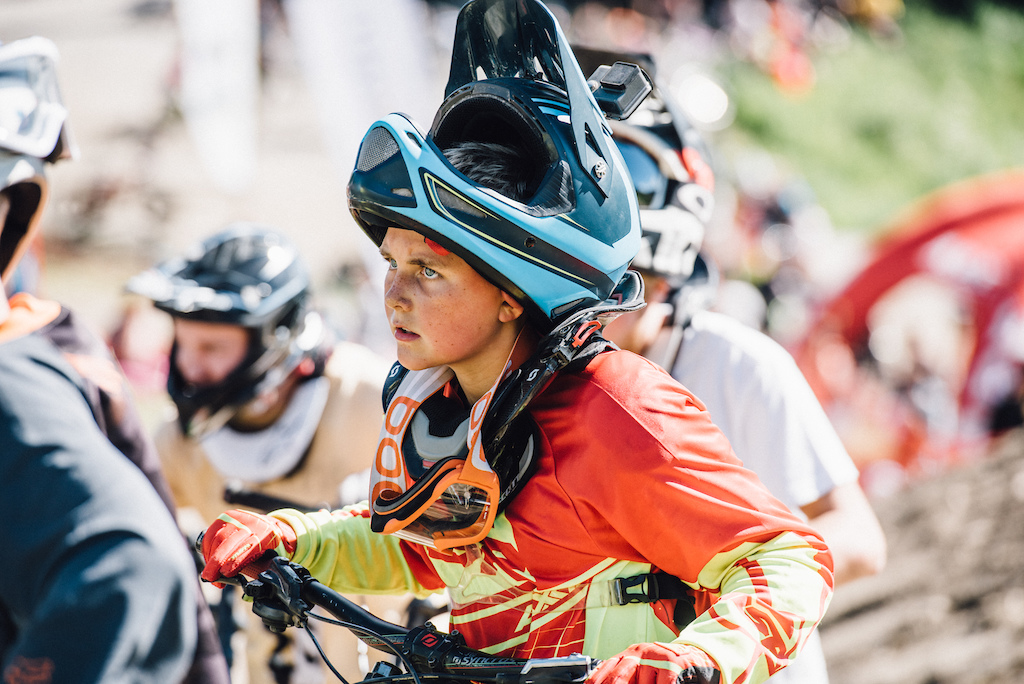 Several groms took the chance to ride with their older idols. 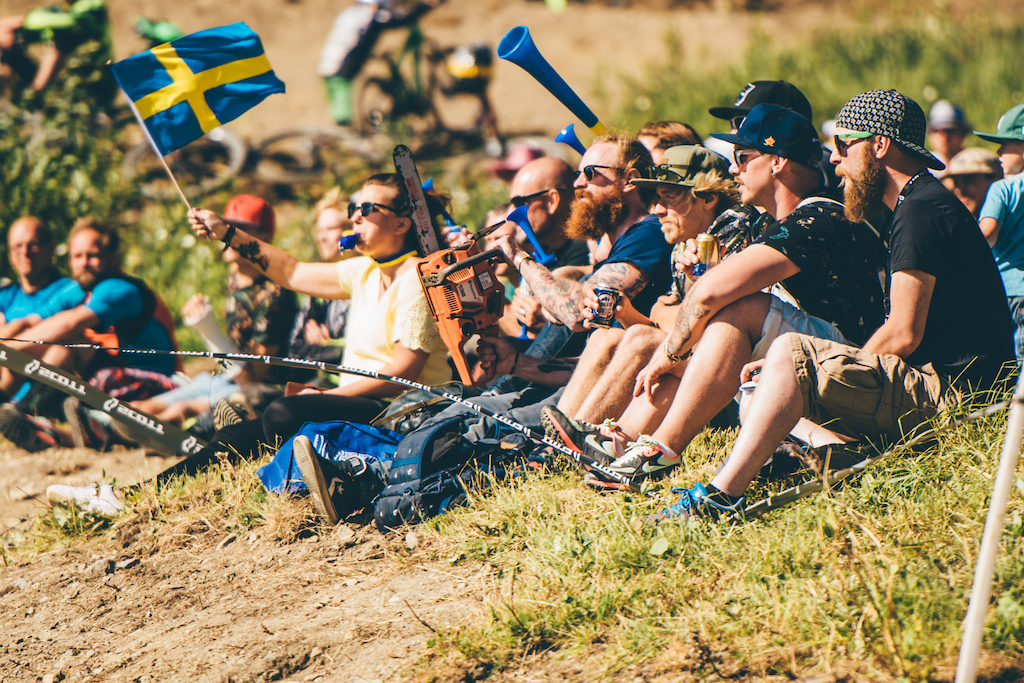 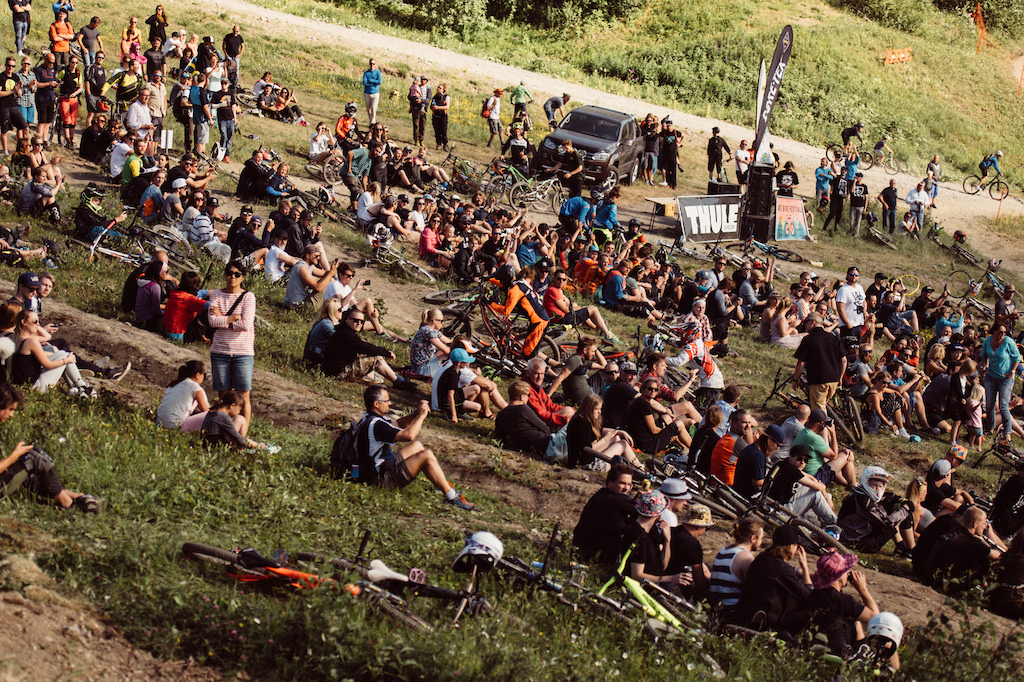 The crowds were bigger than at the alpine world cup in winter.

The festival capped off with the Åre Video Challenge at the Holiday Club Arena. 750 stoked people showed up to watch five movies created during a period of days in the Åre area. If you haven't seen them already, this is the time to do it. All the movies can be found over here.

JaakkoPosti (Jul 14, 2016 at 8:55)
Great event and great photos from it. If someone is interested I shot quite a lot photos of the Enduro race www.jaakkoposti.com/BLOG/Areenduro2016

shooby (Jul 14, 2016 at 3:10)
been there last year and I must admit, Are bikepark is one of the best. and yes better and more versatile than hafjell. this article makes me wanna go back there