Video: Building Trails That Make the Stoke Meter Go Into the Red Zone in 'Soil Searching: Tales from Tasmania'


Famous for its koalas, kangaroos, eucalyptus forests, Vegemite, Hugh Jackman, and a million things that want to kill you, there’s still one thing not so well known about the Land Down Under. Australia is also home to some of the best mountain bike trail builders in the world, including Rhys Atkinson and Ryan De La Rue. 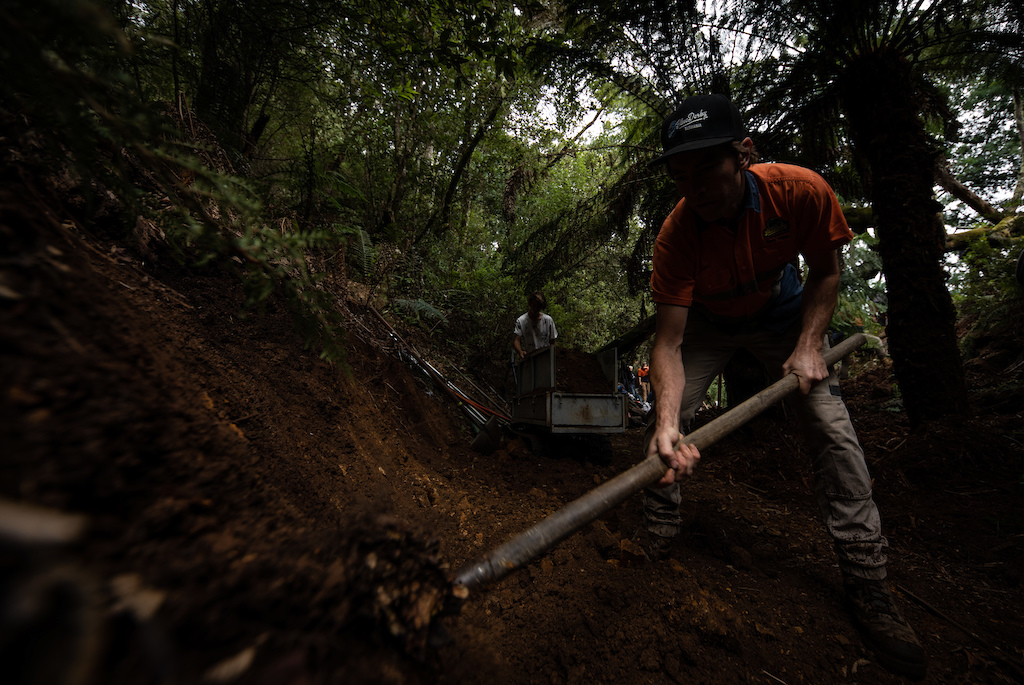 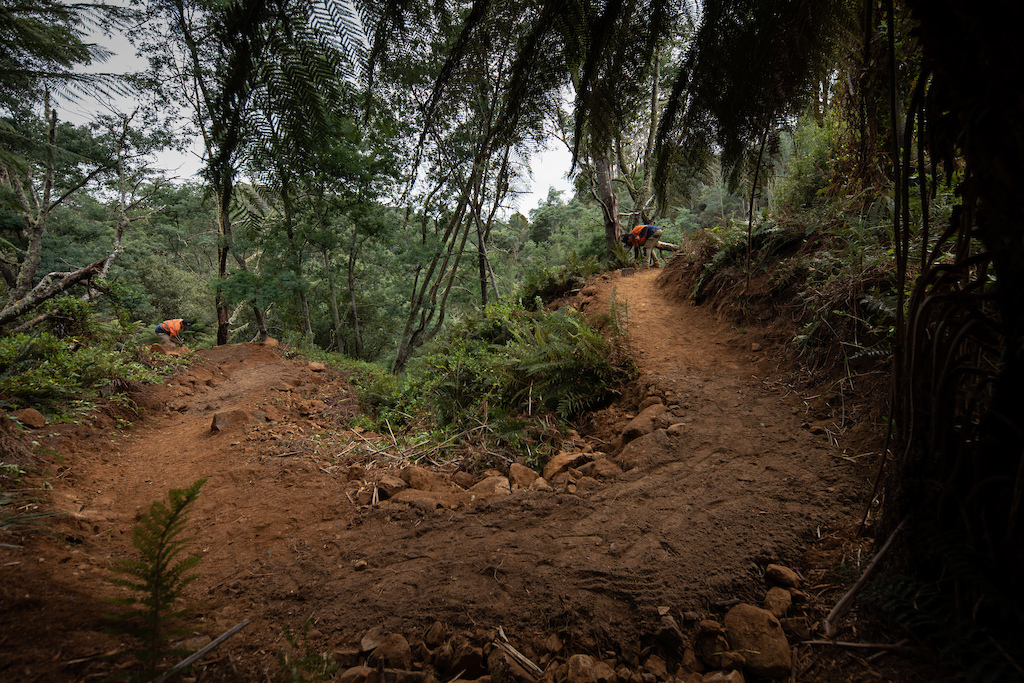 Ever broken in a wild horse? You can get a taste of what it’s like when you ride down one of Rhys’ trails. You know what’s coming, and you’re ready for it, but the stoke meter still goes into the red zone every single time. Rhys’ trails beg you to be on the limit and rewards you with fast inside lines and sneaky bonus lines and jumps. Rhys builds his own brand of dirt-adrenaline.

And dropping into one of Ryan’s singletracks? Equally thrilling, but unique. It’s like letting the current of a river take you on the ride of your life. Perfect. Flow. Ryan pieces trails together at the level of infinitesimal calculus; somehow always divining the optimal distance between a sequence of jumps, or a painstakingly perfect angle and height for a berm. The trail Detonate, which Ryan and his crew built in Derby Tasmania, is testament to this. Detonate is an absolute masterpiece and, in point of fact, won the first-ever EWS Trail of the Year in 2017. 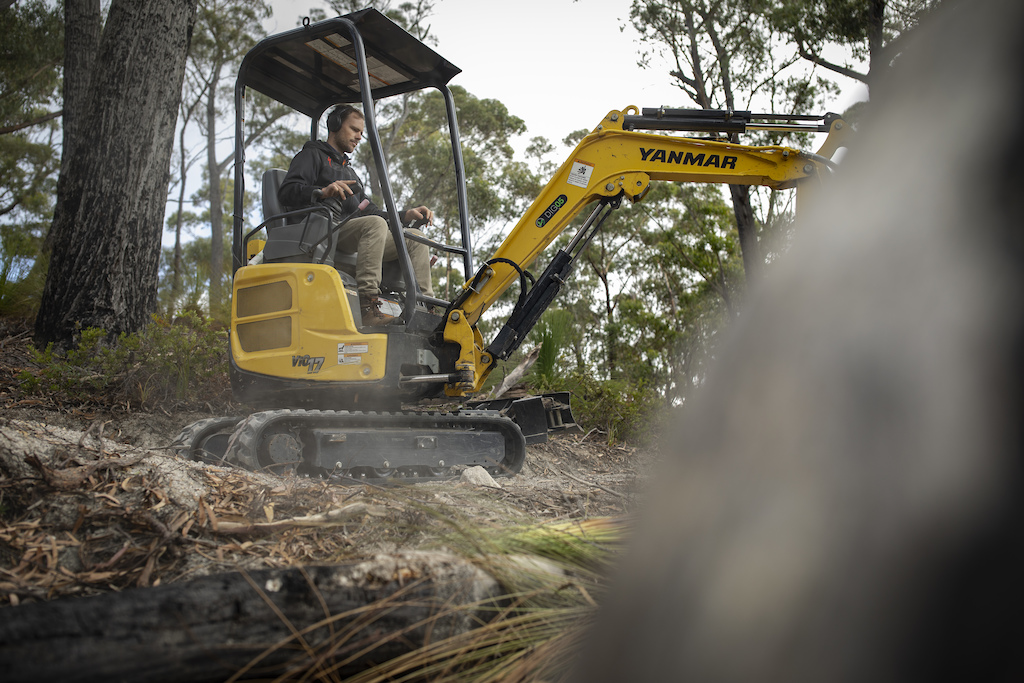 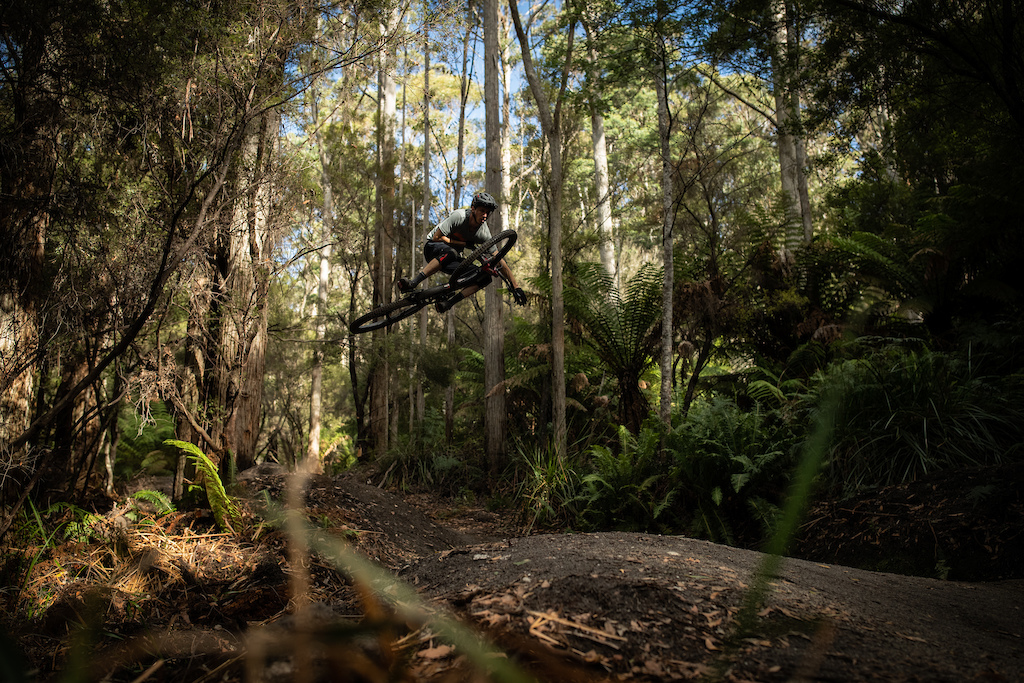 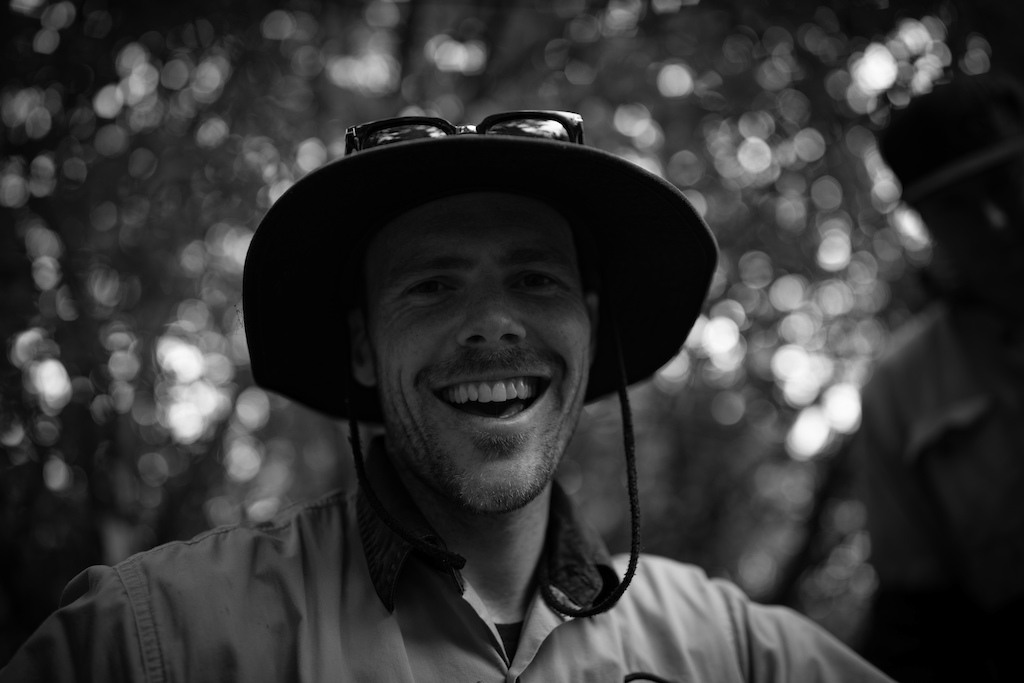 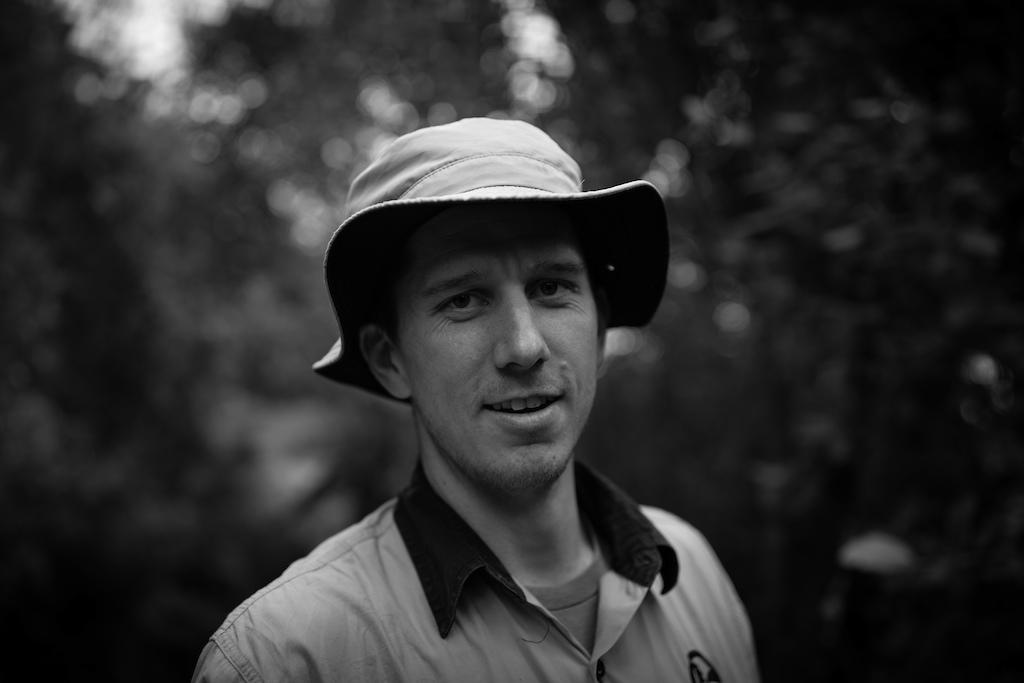 What makes Rhys and Ryan’s trails so good? It doesn’t hurt that both builders are undeniable rippers, and that they bring a true rider’s perspective to their designs.

Rhys is a top-tier racer and former winner of the national downhill series. Ryan possesses a mind boggling number of KOMs on Strava. Both Rhys and Ryan came to trail building through racing. In each case, the aspiring racer was looking for a day job that’d let him earn a buck, stay fit, and still pursue his dream of becoming a professional athlete. So, they joined World Trail, Rhys first, in 2008, and Ryan a year later.

World Trail, for its part, is what can only be described as Australia’s powerhouse trail building outfit. The organization has built hundreds of kilometers of trail in Australia — including every World Cup, World Championship, Olympic, and Enduro World Series course in the nation. They’ve also constructed trails all over the globe. When Rhys joined World Trail in ’08, he learned the ropes from the organization’s founder, master trail builder and Mountain Bike Hall of Famer, Glen Jacobs. When Ryan came along in 2009 it was Rhys’ turn to pass on the trade. At first, World Trail provided the perfect platform for both riders to pursue their dreams of becoming professional athletes. They’d work on a trail project in the off-season, save up some money, and then come in hot and ready for the racing season.

But then the job became more than a job. Trail projects got bigger, bike parts got more expensive and, more to the point, an overwhelming love of designing and crafting trails set in for both riders. In short order, Rhys and Ryan soon became full-time, cornerstone crew leaders for World Trail. 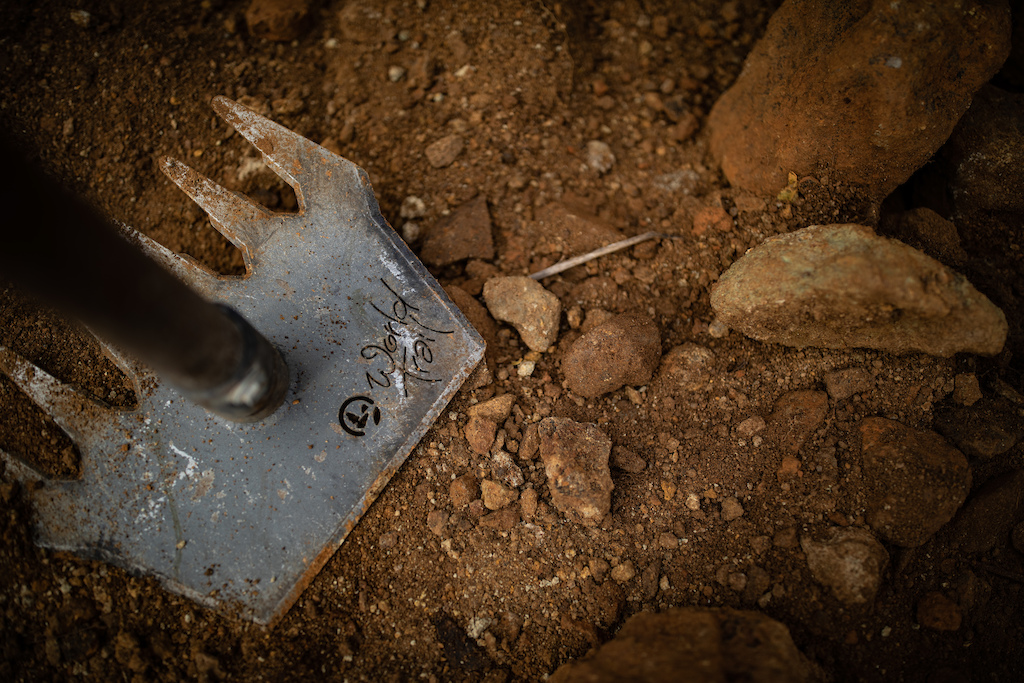 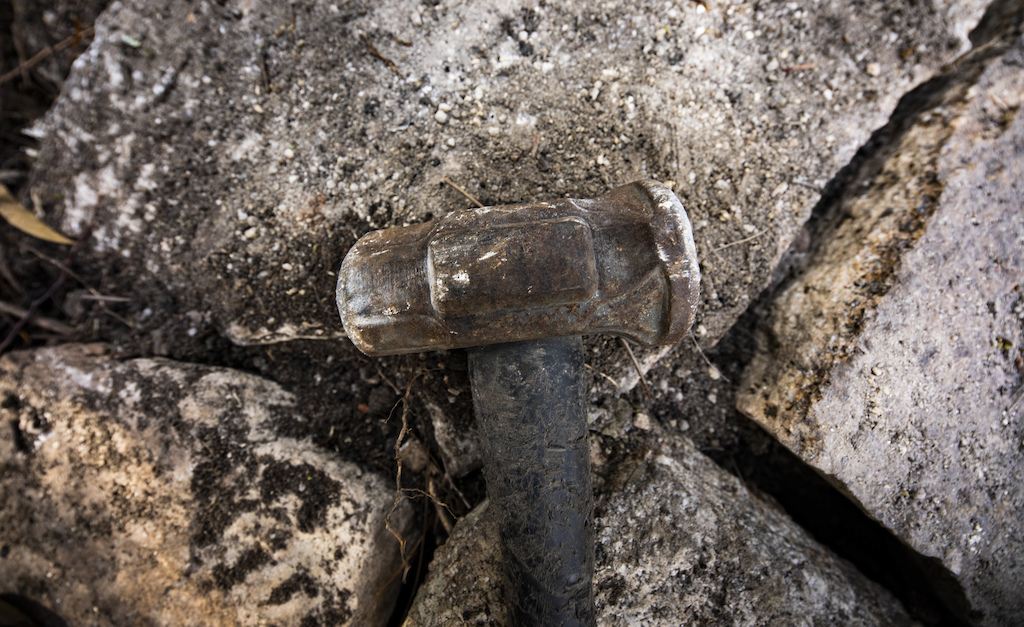 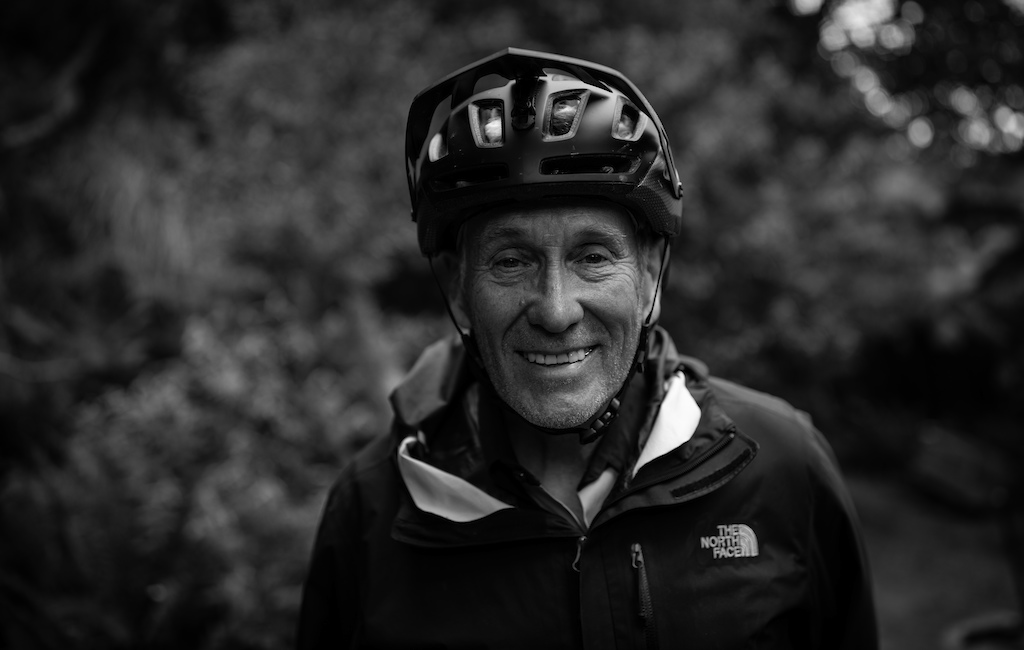 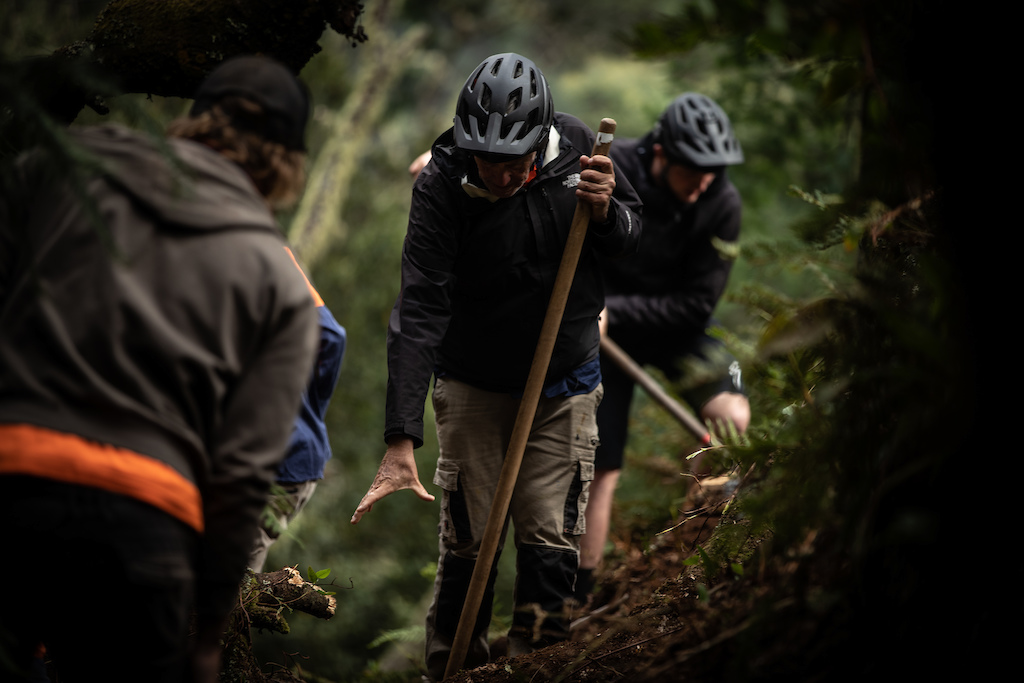 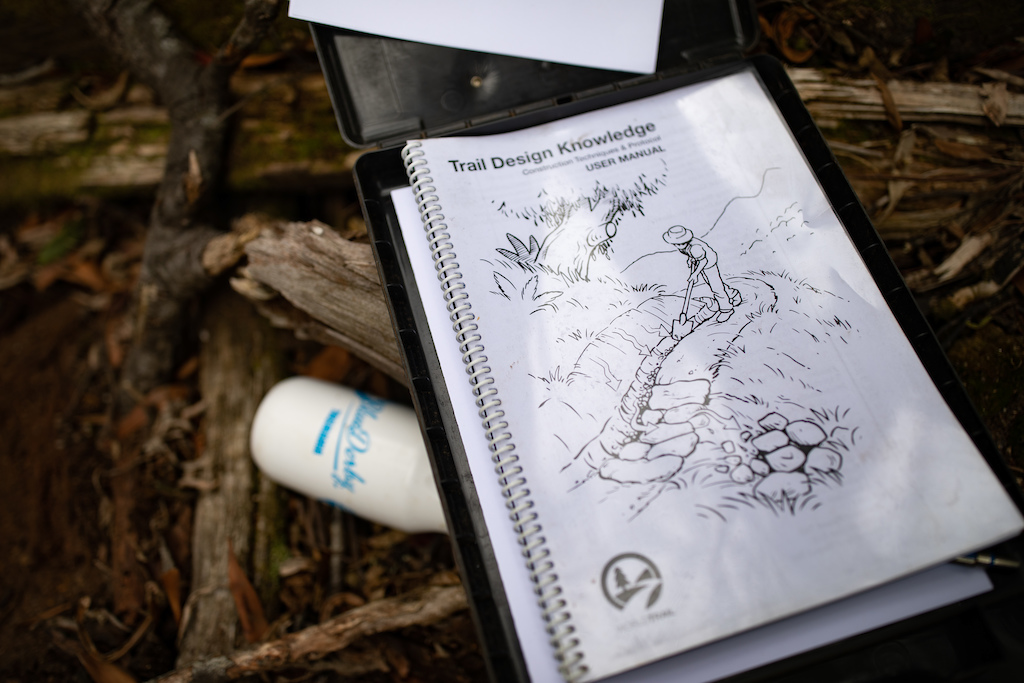 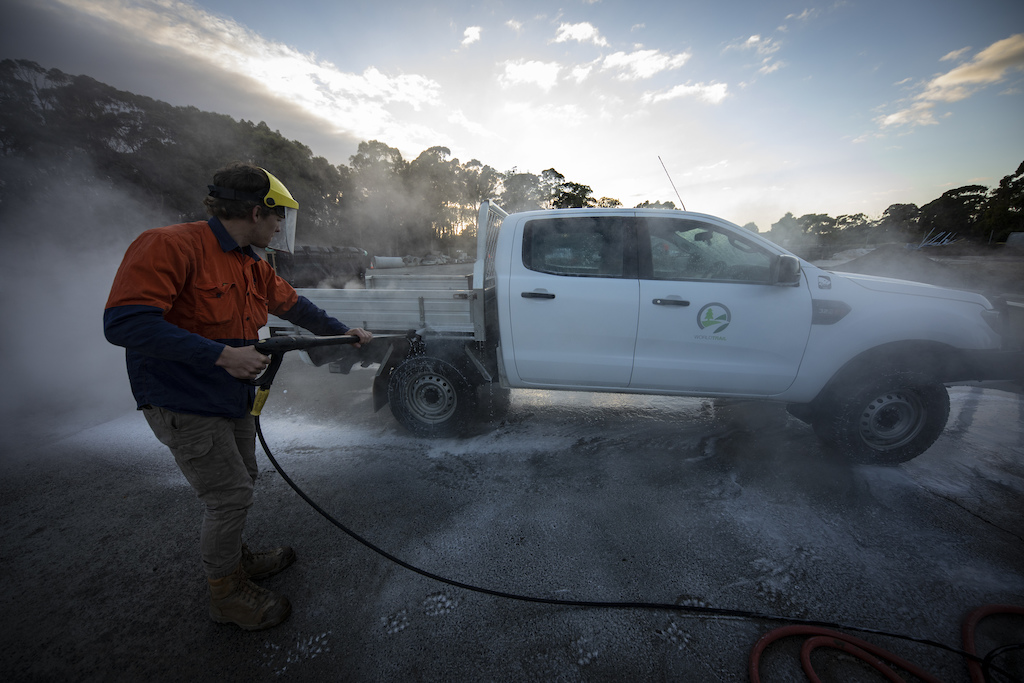 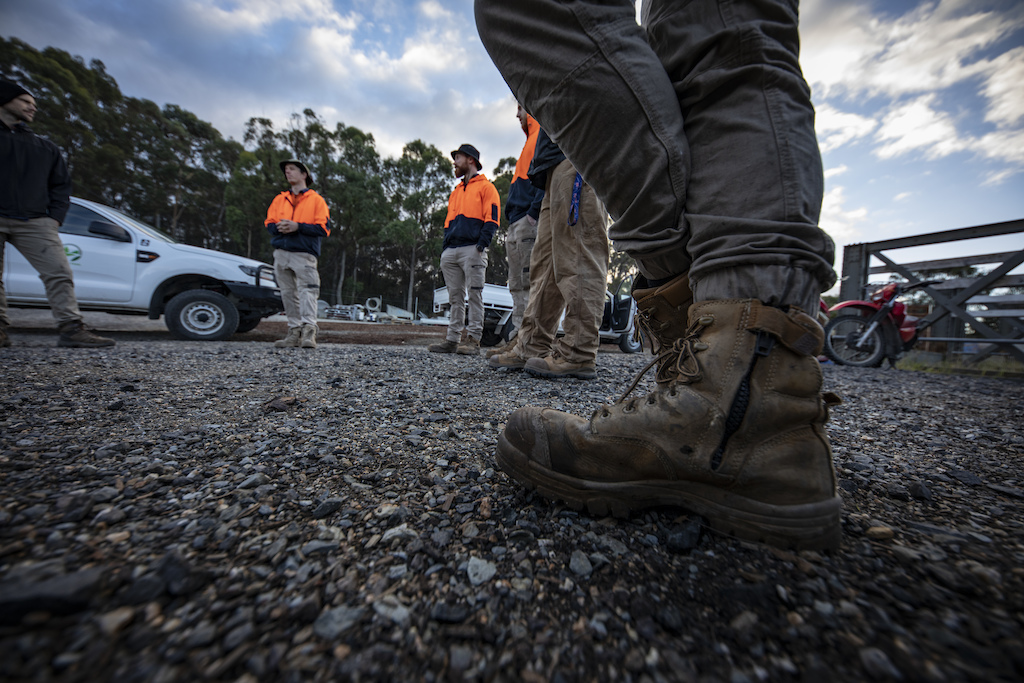 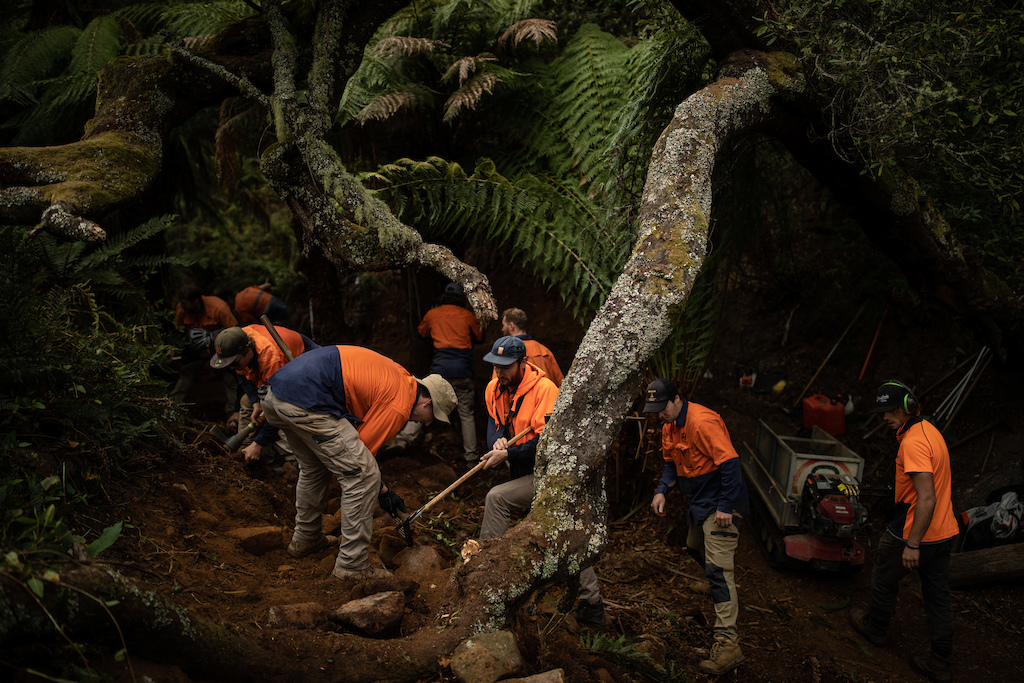 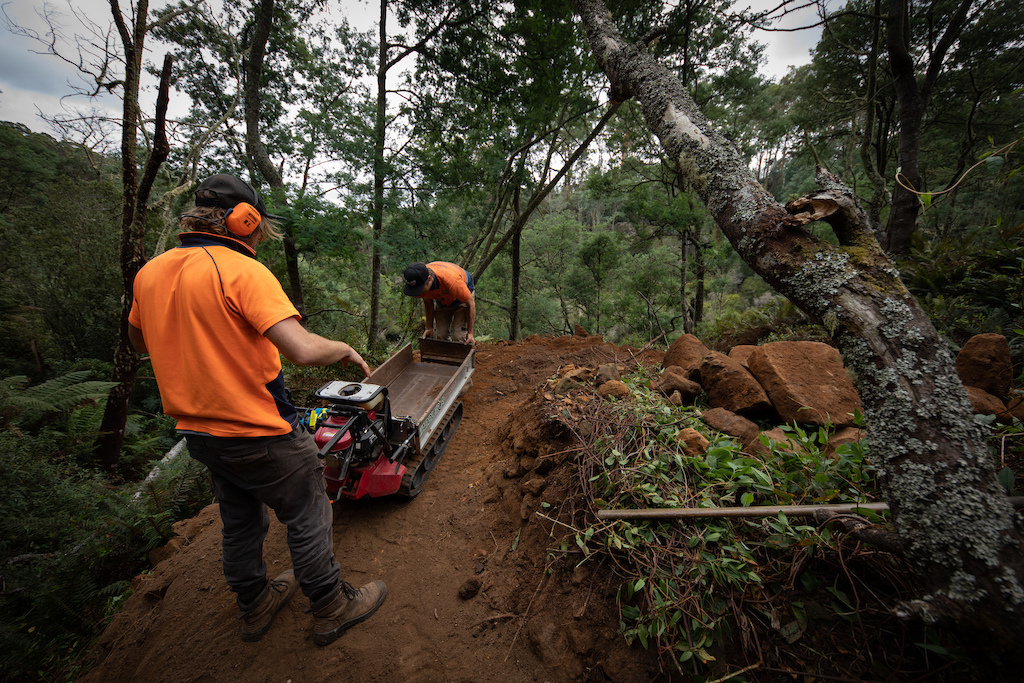 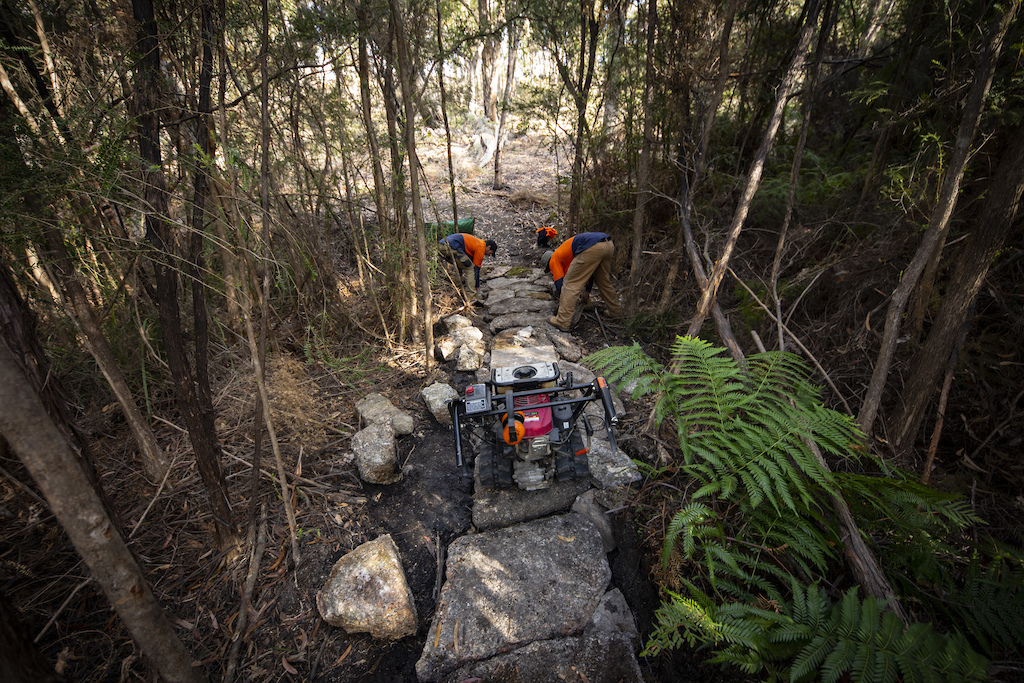 “It’s really hard for me to imagine doing something different than this now,” says Ryan. “Because even though it’s a hard job sometimes, the majority of it is just good times…to be able to make living doing something that you love? It’s a rare thing.” 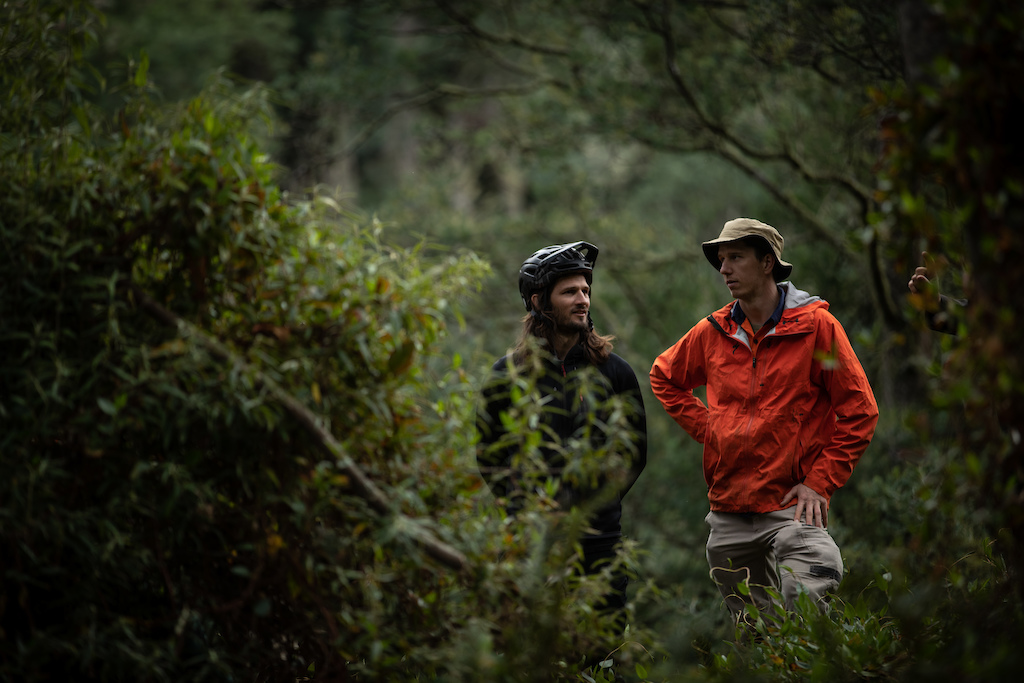 We owe a lot to trail builders like Rhys and Ryan. It’s certainly not always apples (that’s Aussie slang for “fine”) in the woods, but whenever a fellow crew member gets discouraged, Rhys provides some perspective with wisdom learnt from years in the trenches.

“Just look where we are mate,” Rhys is fond of saying, “we’re building mountain bike trails on the side of a hill. And this arvo (afternoon), we’re gonna go ride them.”

It’s hard to argue with that. 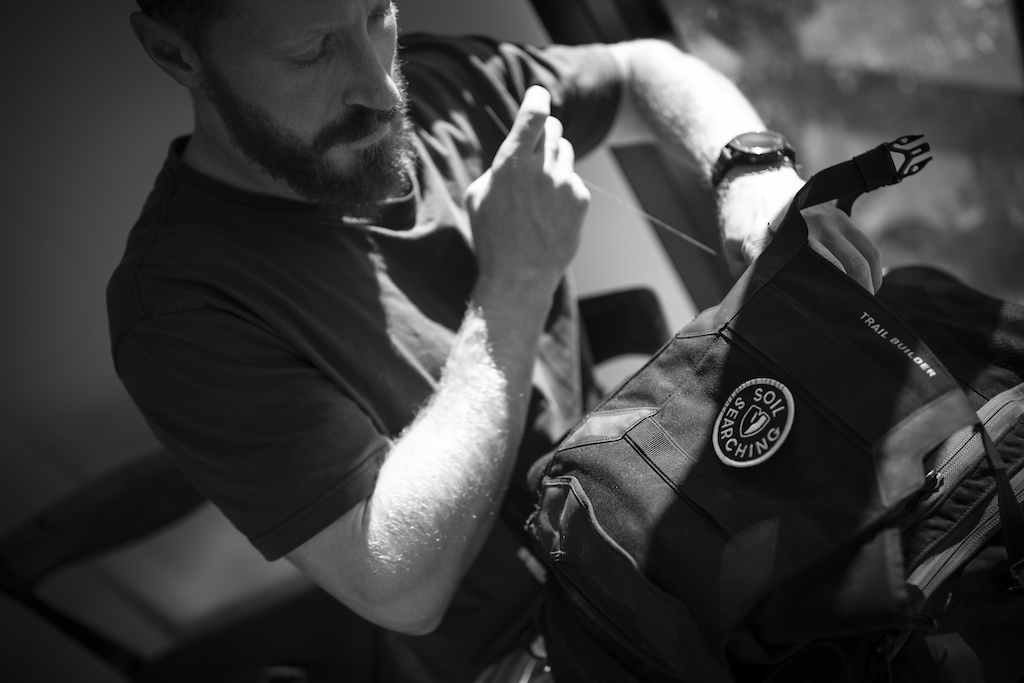 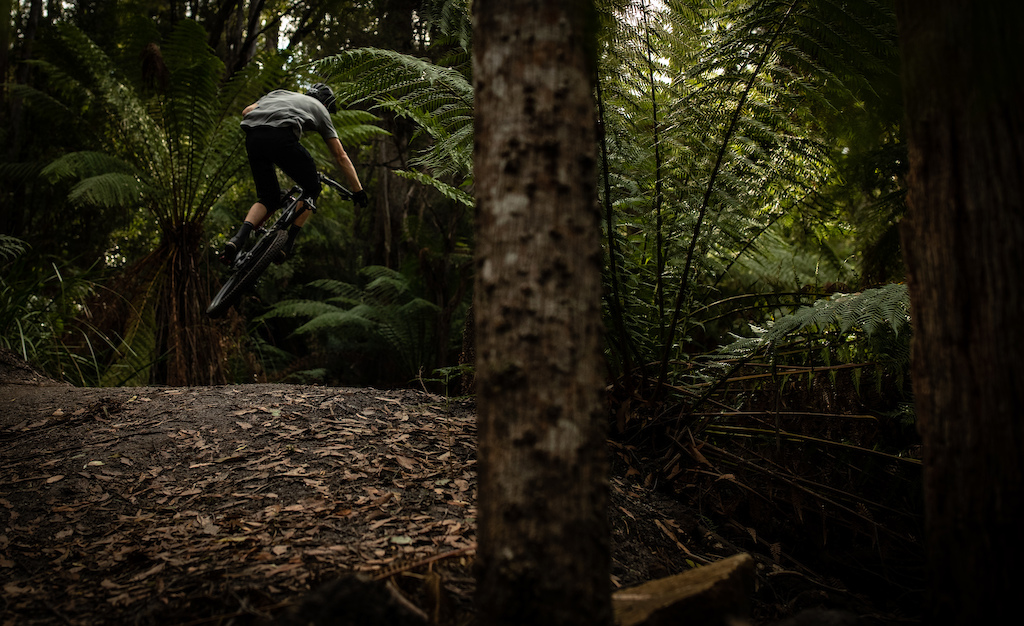 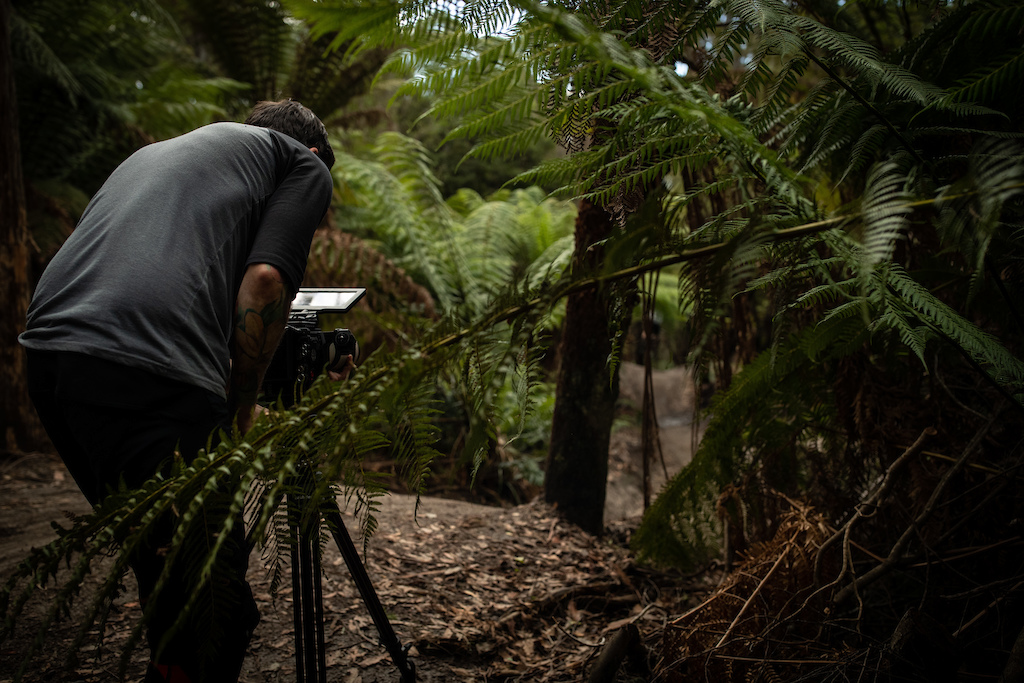 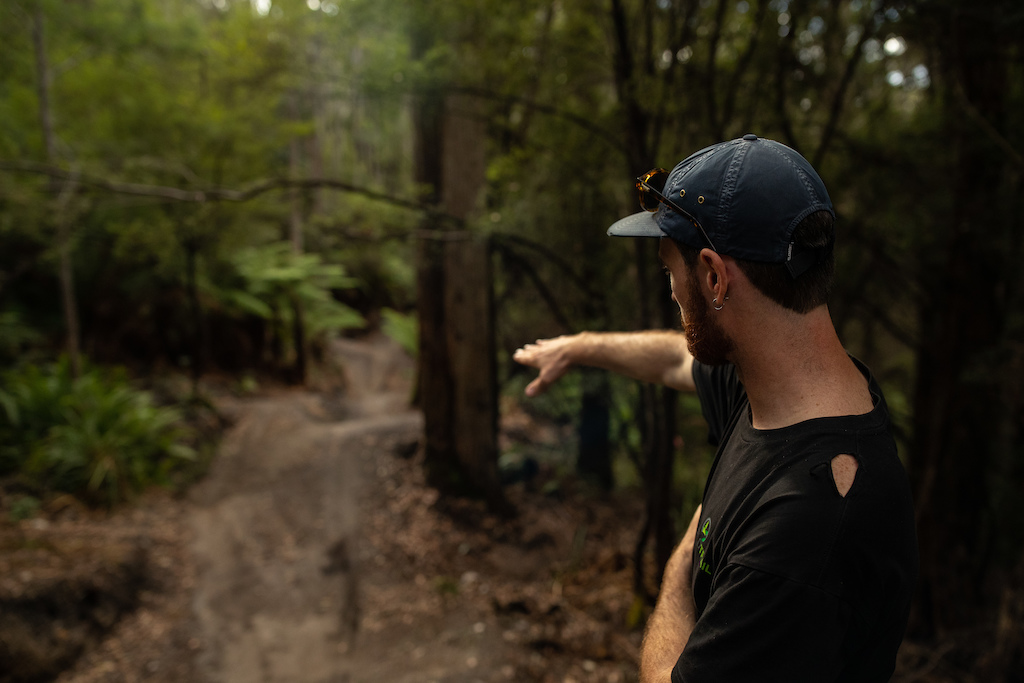 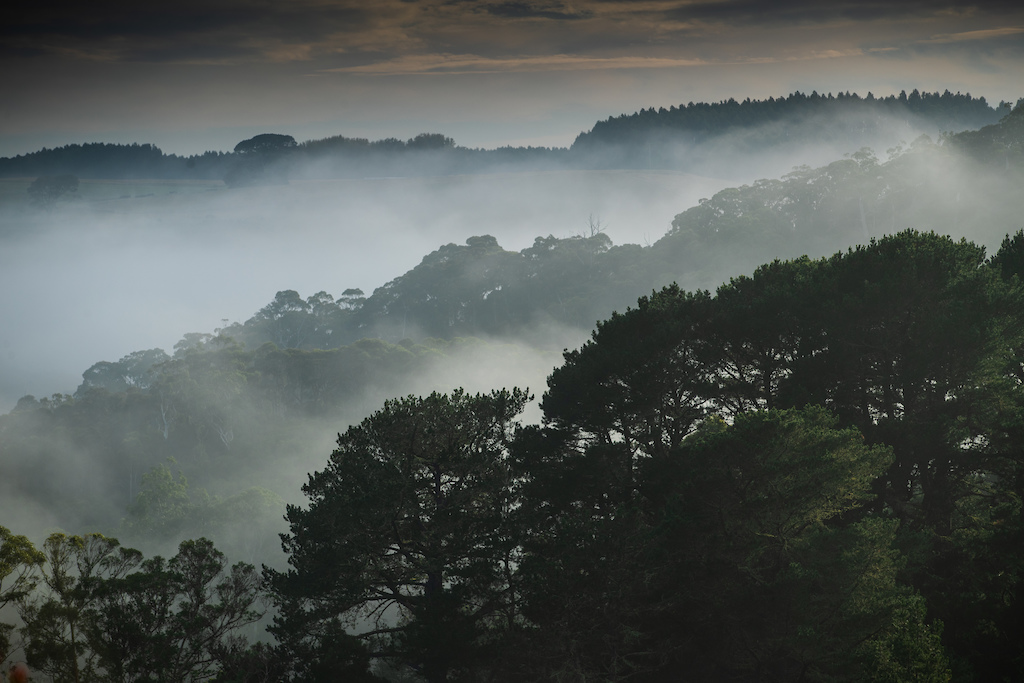 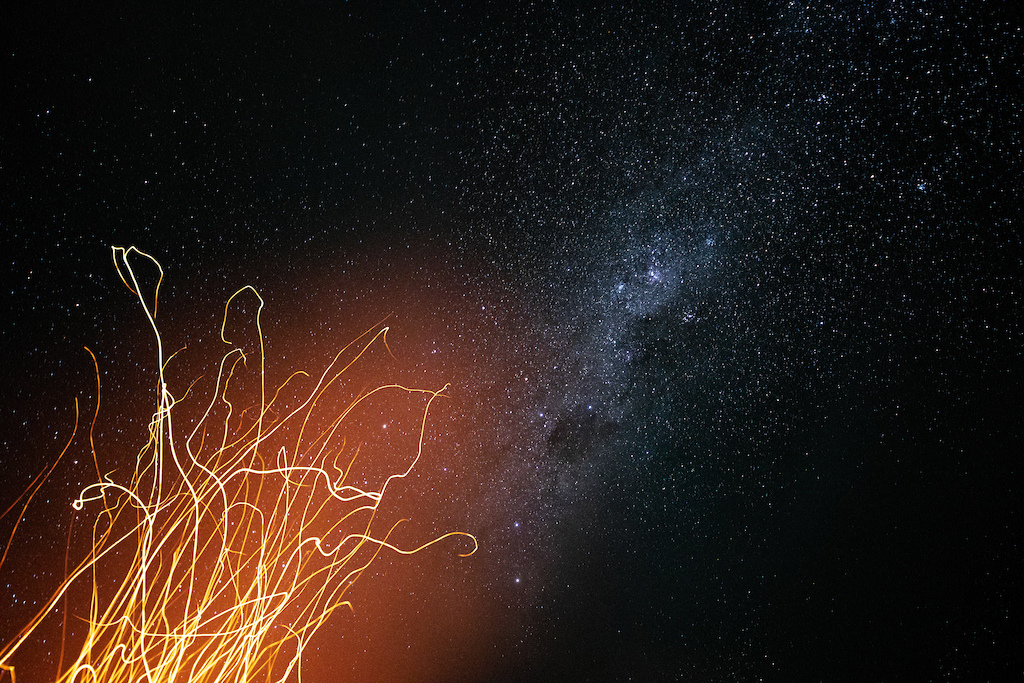 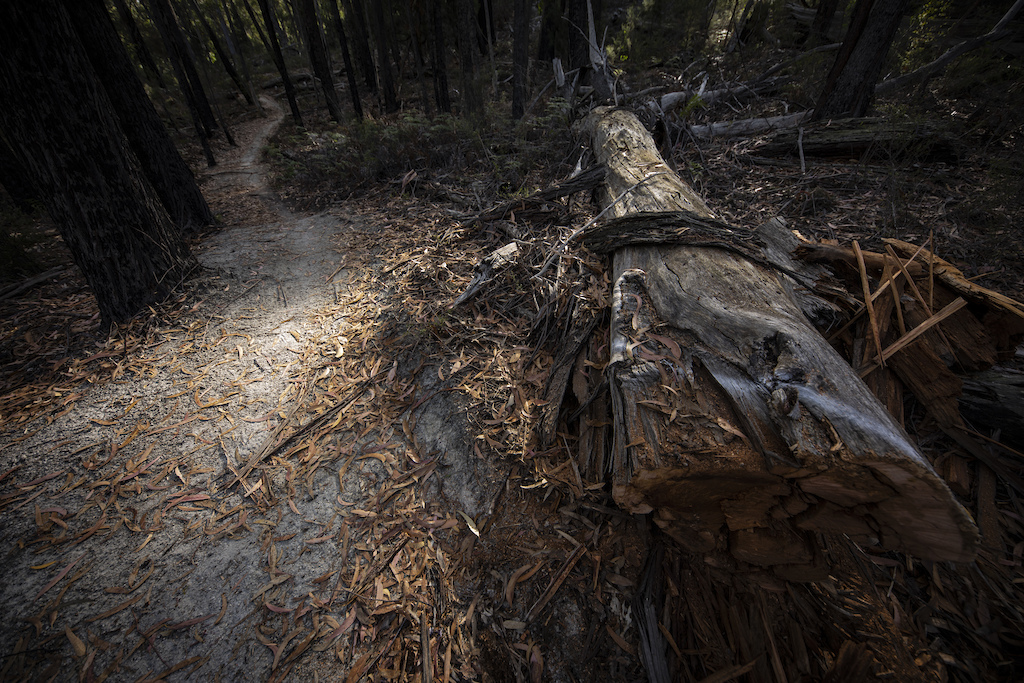 Tweet
Must Read This Week
Interview: Trek's Travis Brown On Experimenting With 32" & 36" Wheels
85649 views
First Ride: Cannondale's All-New Scalpel SE
72205 views
Ridden & Rated: 4 of the Best eMTB Motor Systems for 2020 - Bosch vs Brose vs Shimano vs Fazua
60217 views
Pinkbike Poll: If You Had to Ride One Bike for the Rest of Your Life, What Would It Be?
53284 views
Video: Conflict Arises Between 17 Year Old UK Rider & Apparent "Trail Saboteurs"
52131 views
First Look: ShockTune is a Free Suspension Setup App
46406 views
Video: Claudio Caluori Tries to Keep up With Nino Schurter on his Home Trails
45198 views
Bike Check: Ben Cathro's Santa Cruz V10
35475 views

MrAngry (May 19, 2020 at 13:33)
Massive respect for all those that build, maintain and improve the trails we all ride.. all to easy to forget the hours of hard work that go into the things we zip through in a heart beat..

Obi-None (May 19, 2020 at 16:29)
Big thanks to gents for building awesome trails! Can't wait for domestic travel to open up so I can go visit Derby and ride some of these legendary tracks.

That is one of the lamest things I've ever read. It's like a bunch of office nerds got together and ran a meeting to discuss the metrics of 'cool'. If someone said that to me I'd be bound by honour to give them a swirly.

sharkov (May 21, 2020 at 17:14)
Much Respect to all the people Swinging Shovels! MTB would not be possible without them!

numshi (13 hours ago)
It's World Trails secret recipe book crafted over many years by Glen Jacobs.. I don't think you can buy that thing anywhere

Emu-Jon (May 20, 2020 at 15:12)
Even getting paid it's not a walk in the park, 9 hours busting your arse to get trails finished to move to the next one... huge respect to these guys but more for the people who go out in their own time to fix issues, clear drains and maintain these trails.