It was the autumn at its best, with rainy days in Slovakia, but I did not feel like it. I had to escape, so I called Tomas, the one friend that always says yes for a trip offer. My plan was to head for some dirt-jumping to Barcelona again, but when he showed Malaga with its massive skatepark built by Ruben Alcantara, I was definitely in ! We booked the cheapest flight and accommodation possible and the trip could begin. And hell yeah, it turned out as one of the wildest trips I have ever been to. 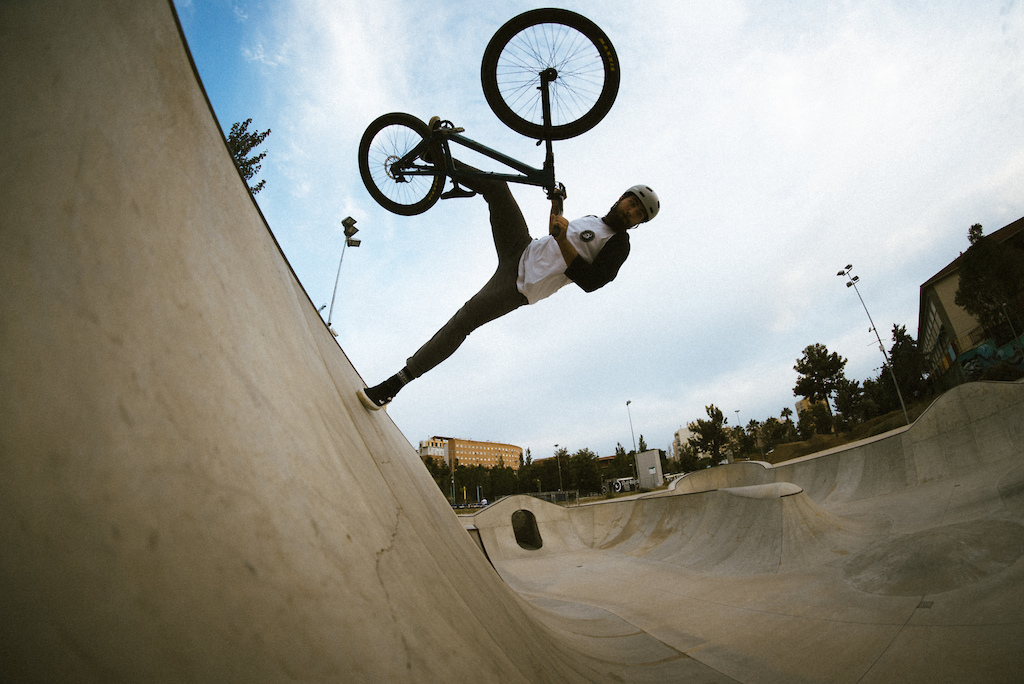 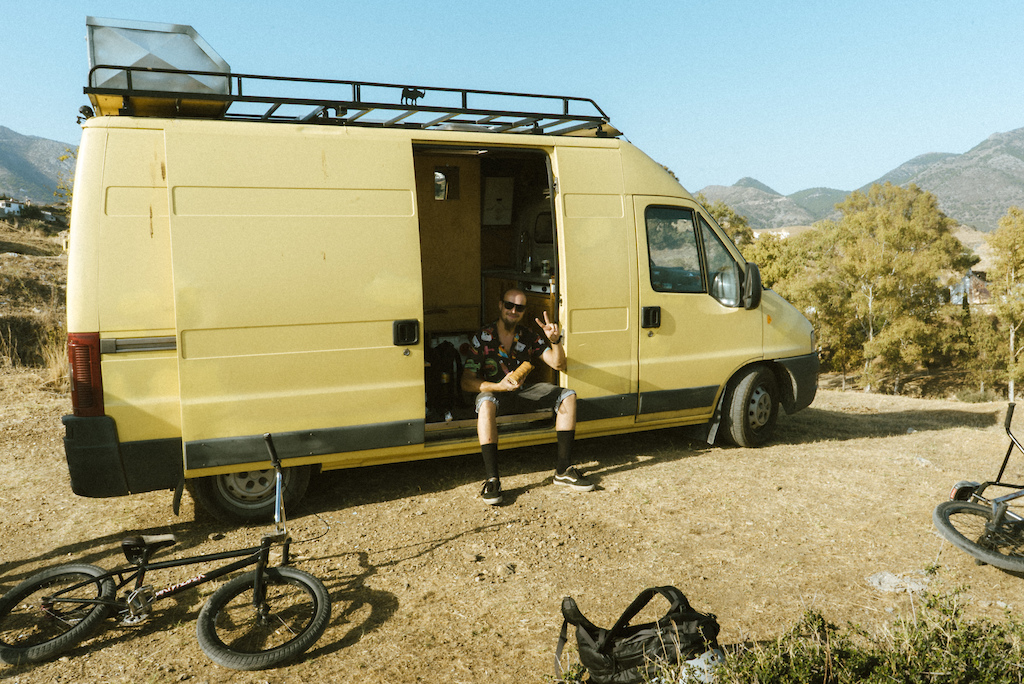 Vojto and his yellow campervan
First day out there, we immediately headed to check the skatepark. Someone was waving at me, and I was like who the hell is that ? When he came closer and started to speak Czech, I realized, that It was my friend from Prague Vojto ! He was living near the skatepark in his campervan and riding BMX everyday. That was the best thing that could happen, now we got our local guide on a first day of the trip. We spent the first 2 or 3 days riding the massive concrete pool, which was the best I have ever ridden and when the sun came down we moved to the dirt-jumps that were illuminated by the lamps, so you could ride in the night. 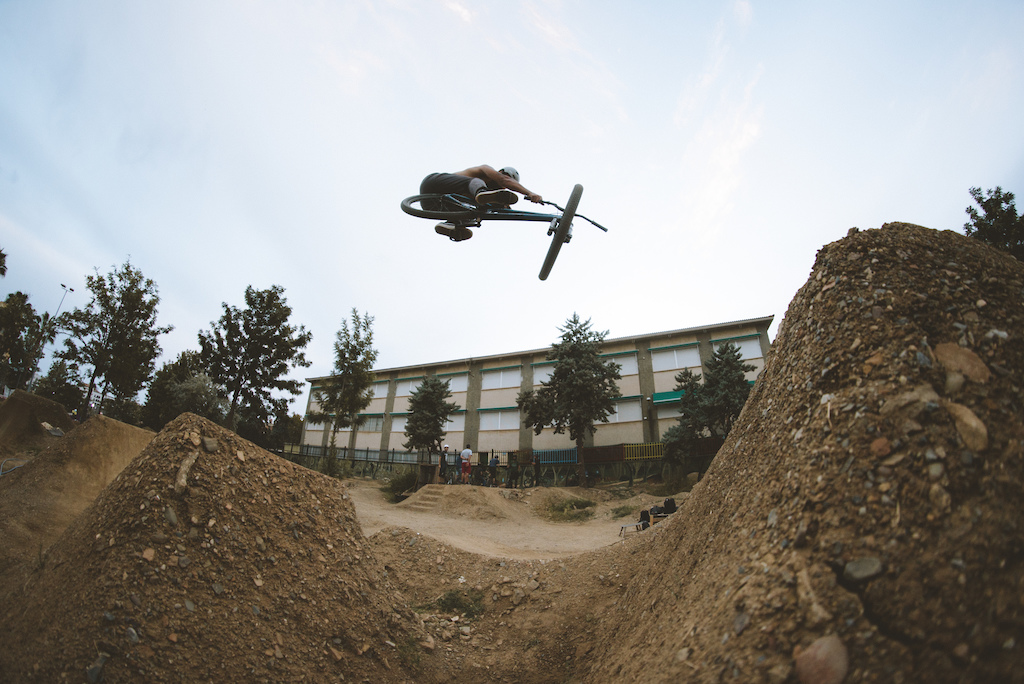 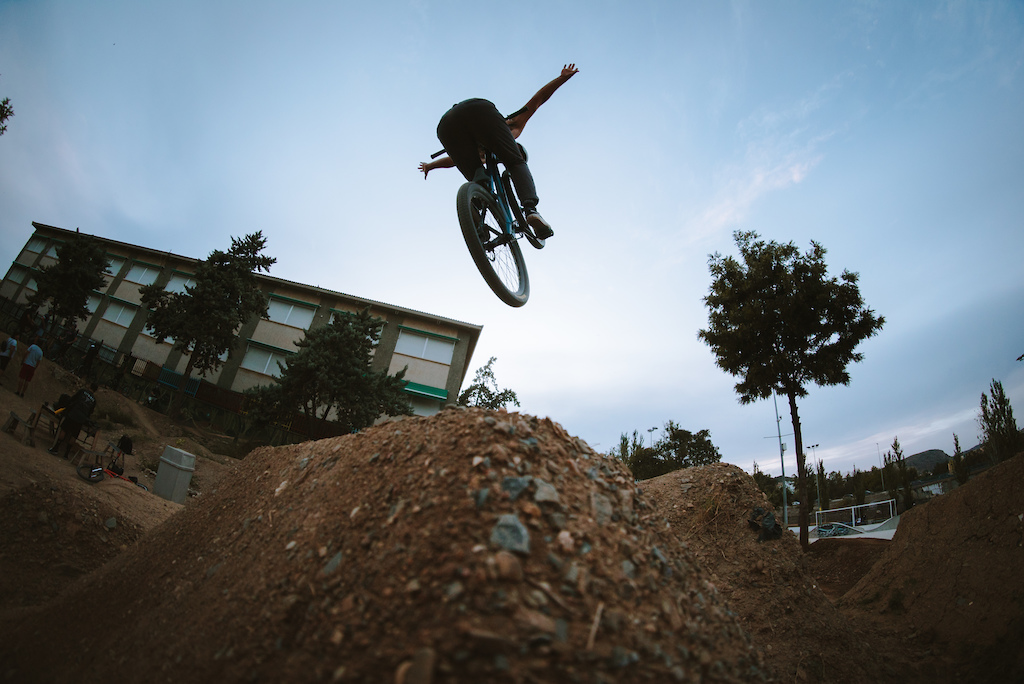 After few days we met the bunch of crazy french guys that, call themselves the Canette life crew and that was when the fun began. We started to explore the city and its legendary spots. First was The Hook, the gigantic concrete wall with a smooth radius but a deadly steep run in for a dirt jump bike or a bmx with one brake. I have never seen a spot like that before. It was part of a large water dam system. 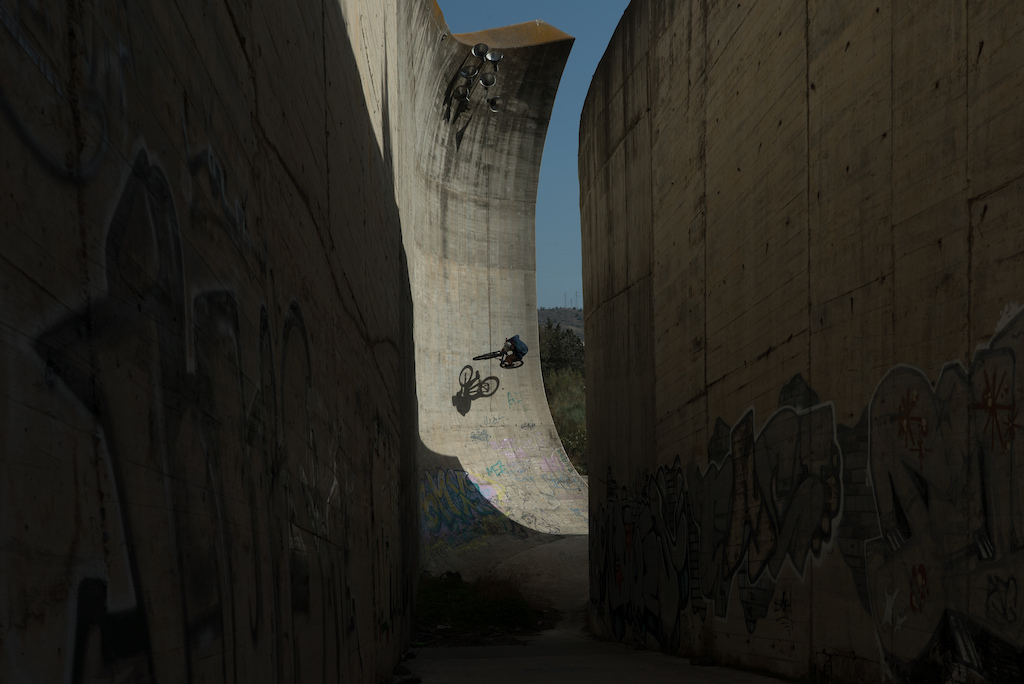 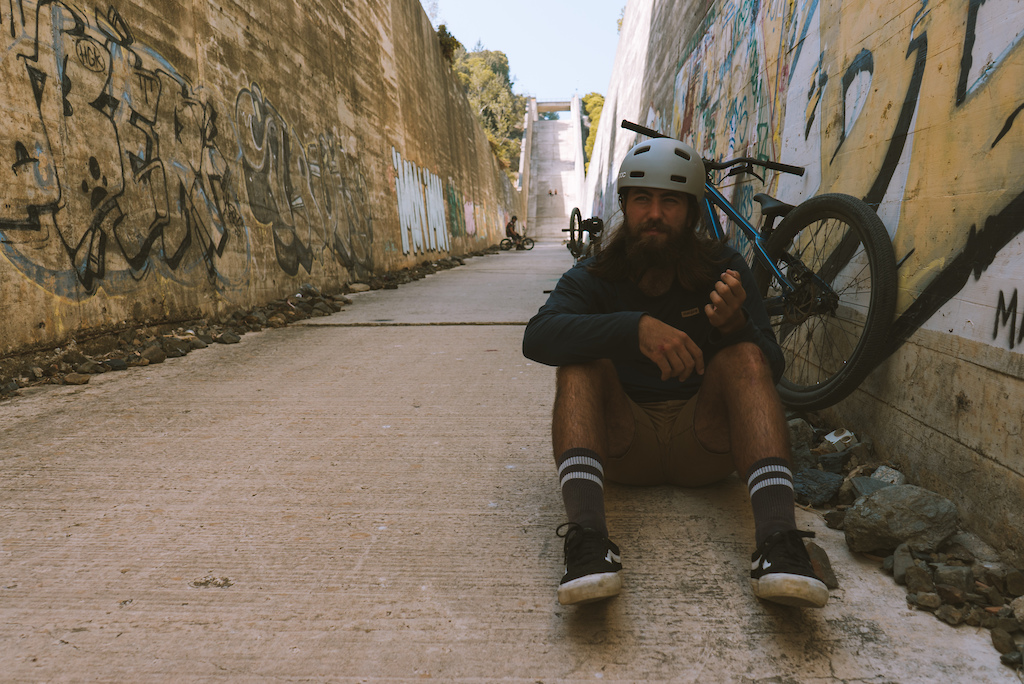 Crashing on a concreete from 5 meters is not a nice thing
Next thing that we explored was an abandoned drug-dealer mansion, deep in the hills around Malaga. And it was not just a mansion, it was a place where the segment of Not2Bad movie was shot. It was full of super huge jumps and spots, but most of them were in bad condition. But the best thing that we found was the old pool, like you can see in skate videos from America. The pity was that it was flooded, so we went home. On the other day I got a call from one of the french guys : "hey Viktor, we borrowed the water pump, lets clean the pool ". And that is how, probably the best day of my life started. We jumped to the van and drove to the mansion,french guys were already there, and yeah we were a pretty big party, I would say that more than 10 people. We split in two groups, one started to pump the water out of the pool and the other was shaping the gigantic dirt transfer. Everyone was working so hard , and after the whole day we were finished and could enjoy the fruits of our labor. Heavy session went on the transfer, and when the dark came, we lit the fire in the middle of the pool and the madness started. We called it : "Ring of fire". 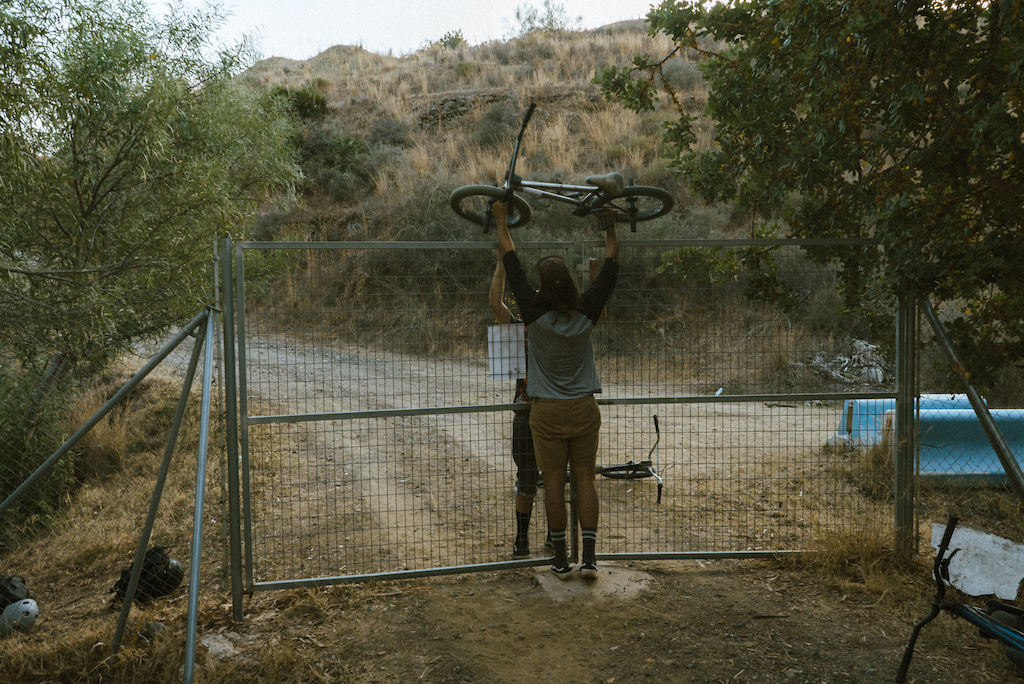 You need to pass this fence to get into the mansion 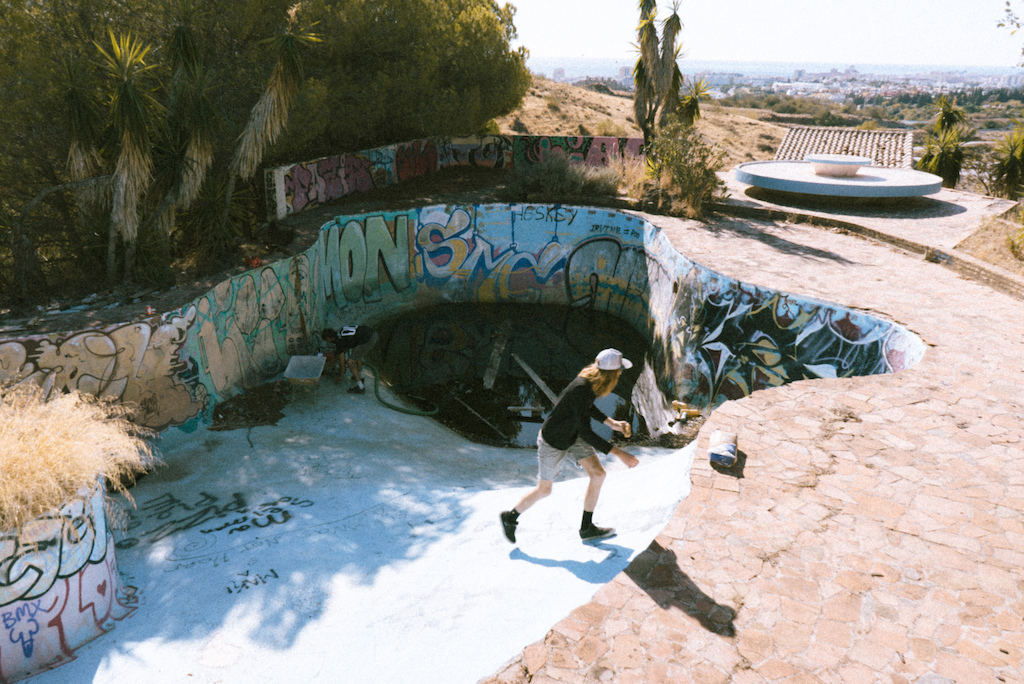 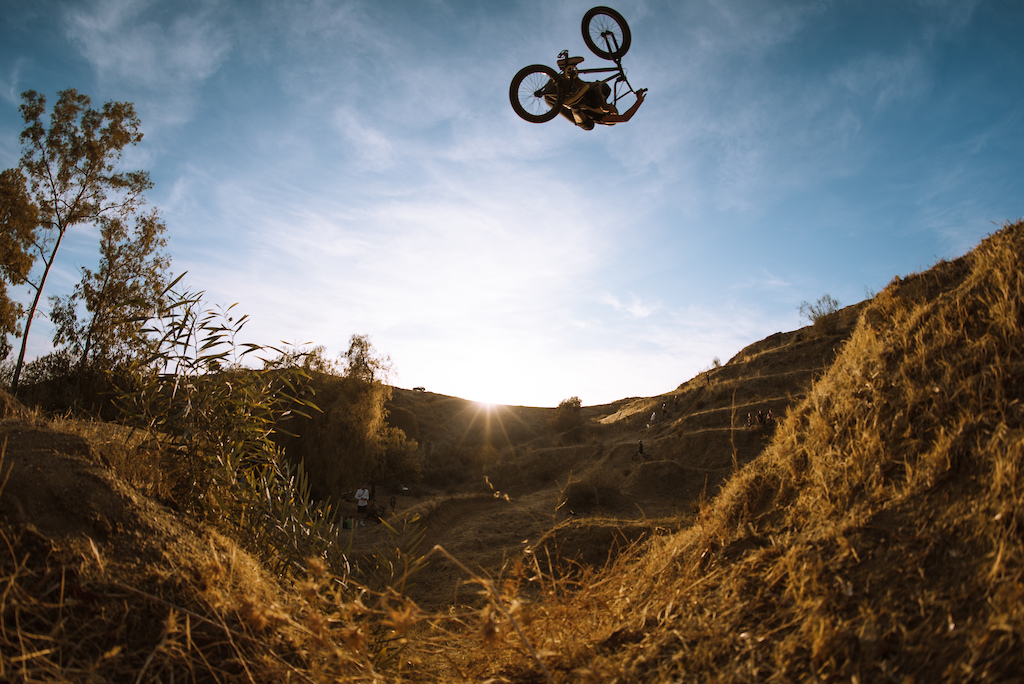 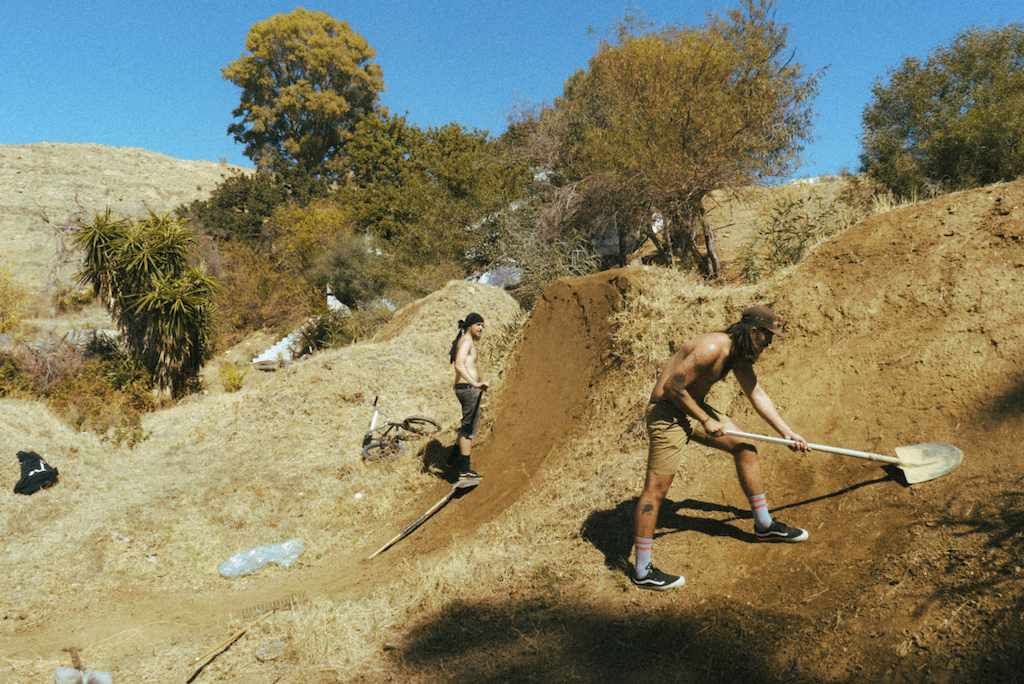 On our last day we had a chance to ride the spot that, most people only dream about. The old guy Joe from Great Britain that, is living in Spain took us to ride his secret pool that he built with his own hands. Imagine driving 2 hours trough the mountains, literally in the middle of nowhere and suddenly there is a house with an amazing concrete pool with view on the mountains. Unbelievable, that is what we thought in that moment. Joe is an guy that is enjoying his pension in Spain and he got bored, so he decided to built his own pool. And what a pool it is. Inspired by the one that Ruben Alcantara built,perfect dimensions everywhere, exactly created for bike riding. We need more guys like Joe ! 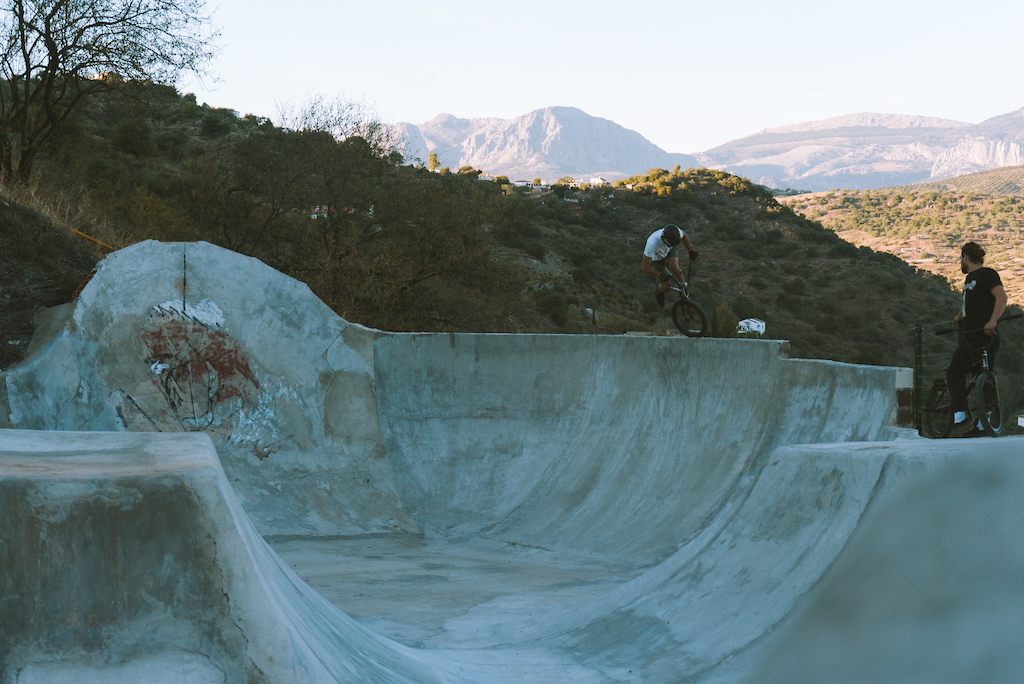 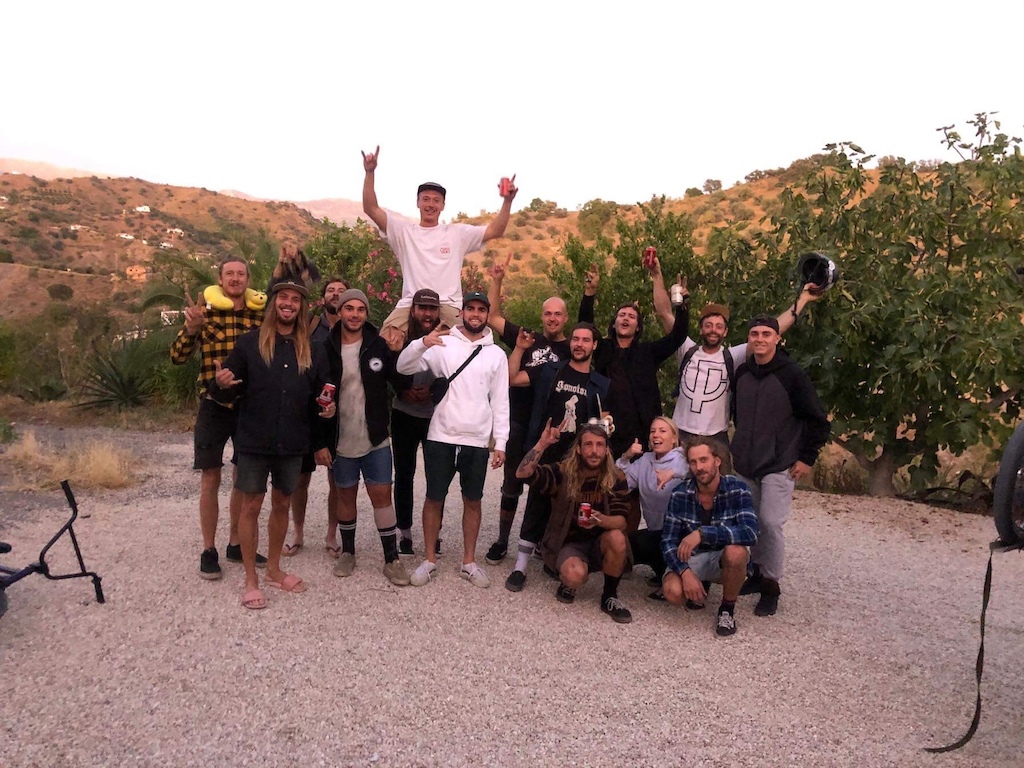 Canettelife crew + us !
This trip was in the end but I realized, that I will never forget it. After long time it remained me why I adapted my whole life to riding a bike. It is not because of competitions or being better than the others. It is because of all those moments, all those nice people you get to know, it does not matter if you ride mtb or bmx, in the end we are all just a bunch of crazy kids, and that is how it should be. Thank you biking !

Writing and riding by : Viktor Novak
Photo and video by : Tomas Hossa

rosemarywheel (Apr 22, 2020 at 7:13)
I really enjoy seeing out-of-the-way spots like these being used. They seem sad, with nothing but dirt, rocks and graffiti (and a wee bit of concrete), and its nice when someone takes the time to go out and ride in these seemingly, but fortunately not, forgotten places. Thank you,Viktor