PimpmasterJazz jamessmurthwaite's article
Mar 25, 2020 at 5:52
Mar 25, 2020
Video: British Doctor Urges Mountain Bikers to "Make Good Decisions"
@XD45: You certainly don't appear to be 'woke'. But you carry on spouting nonsense, like blaming Obama for a credit card I haven't washed. You're really selling Trumpian politics for the enlightened religion it is.

PimpmasterJazz brianpark's article
Oct 11, 2019 at 8:17
Oct 11, 2019
Jordie Lunn Passes Away After Crash in Mexico
Aw, shit. Thanks for all the enthusiasm and love for our sport Jordie. Raise the roof up above! 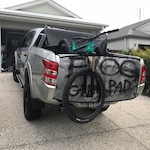 PimpmasterJazz mikekazimer's article
Apr 20, 2018 at 4:33
Apr 20, 2018
Cycling Brands Under Scrutiny in Gun Control Debate
@Deuce-DeuceAndAHalf: Thanks for the commentators; I'll check them out. The BBC is an interesting one – many on the left complain because, in recent times, less complicated right wing elements such as UKIP and people such as Nigel Farage – both as UKIP leader and as a political commentator – have got an unfair amount of exposure compared to, say, the Green Party, who actually have an elected member of parliament (MP) and a genuine breadth of policies. A recent backdrop of Jeremy Corbyn over the Moscow skyline can hardly be called 'left leaning' too. Saying that, those on the right feel that the BBC is left wing because it is funded by the public through a form of taxation and is a media environment, which is traditionally a liberal one. My understanding is that it traditionally leans toward the incumbent government because it's the government which guarantees its funding. That all said, it also has a history of good reporting so is always worth listening to, and the fact opposing political sides both moan about it suggests it's doing something right. I'm not going to get into women's pay as it's a huge subject; I'm not so daft to believe these things are black and white – there are so many other elements involved that I'm not going to do them justice in a forum post. But yes, essentially, I think it only fair that a man and a woman with equal skills, qualifications and experience should be eligible for the same wage. I'm not denying the existence of schemes such as scholarships to help people get through higher education and don't deny that to get there should be tough – I certainly don't agree with 'hand outs'. I am more talking about the basics; access to a quality education, a life-saving health service and the ability to progress through life without skin colour, religion or any other factor that does not affect what the individual is aiming for (be it higher education or a mortgage) being an issue. The process of 'redlining' that was prevalent in the US was an extreme example of this, and it seems the effects are still being felt now: https://en.wikipedia.org/wiki/Redlining "What does all this have to do with communism? Well a central tenet of communism is that people are all essentially the same, that everyone has the same potential o contribute and can be taught to do as much as anyone else." Yes, and no. At its core Communism is an idealistic system that will never work because it is too easy to corrupt. Cambodia under the Khmer Rough is an extreme example: make everyone equal by stripping them of their education and getting rid of money. Kill the educated because they are a threat. Everyone has a job and is toiling for the greater good. The fact that Pol Pot and most of his leadership went to university in Paris would seem to make them more equal than others. Going the other way, the US is arguably the pinnacle of capitalism, a system that depends on producing goods and selling to make a financial profit. It's also a country with a homeless problem and an insanely complicated healthcare system that is held to ransom by healthcare and drug companies. Life there is great, if you can afford it to be. As for capitalism, it has many benefits: it drives innovation and increases the standard of living, but at what cost? the western world is currently the pinnacle of modern achievement, but how long will that last? Do we need everything that is being produced? How long can the planet supply everything needed for production? And what of China, with its odd totalitarian capitalist-communism and burgeoning middle classes, making plastic crap for everyone else? Surely we, as in the West, need to keep reinventing to continue that momentum, which will require diverting into different areas; the Greeks, the Romans and the Persians were also all pinnacles at one point, but were all overtaken. Where I am going with this is that surely a country that is the 'pinnacle of modern achievement' should also be able to look after its poorest and weakest and create fair opportunity for all, as surely producing a better educated and healthy base is more important than driving forward from a foundation built on sand. It's great that people are working hard and getting rich, but this should be a path available to all, and when does the line get crossed where the 1% should be helping those whose shoulders they stand on? To me a mother country seeking to educate its people in a fair environment benefits everyone, whatever their individual goals or life paths, but that education and ability to think is the key. If this is communism, so be it. ;) OK, I've ranted enough and suspect I have wandered way off the point. A few left-leaning thinkers off the top of my head: I find myself agreeing a lot with a few London-based members of parliament – specifically David Lammy and Stella Creasey. I'm not actually a Labour voter, but a lot of what they say strikes a chord and they don't tow the party line. Similarly Dianne Abbott should not be dismissed – she's an easy target to mock, but an incredibly intelligent lady. As for writers, Ian Dunt of politics.co.uk is worth reading, and Jon Snow and Cathy Newman of the UK's Channel 4 News are always fun to watch as incisive interviewers of UK politicians. Max Hastings is a war historian and certainly not 'left' but his books are very good and unflinchingly delve into the political, social and economic aspects of specific areas of conflict, which have many peacetime ramifications. Yeah. John Oliver. ;) Although Jim Jeffries' sketch on guns is pretty relevant to this PB post.

PimpmasterJazz mikekazimer's article
Apr 18, 2018 at 9:06
Apr 18, 2018
Cycling Brands Under Scrutiny in Gun Control Debate
@Deuce-DeuceAndAHalf: Thanks for your reply, genuinely. I will respond further, but not today as I need to get some work done!

PimpmasterJazz mikekazimer's article
Apr 18, 2018 at 5:02
Apr 18, 2018
Cycling Brands Under Scrutiny in Gun Control Debate
@Deuce-DeuceAndAHalf: I do. I used to follow the UK editor of Breitbart on Twitter, despite him being an unpleasant individual, as I wanted to understand why he believed what he believed. I try and read the press from both sides of the political spectrum to get a more balanced view – mainly broadsheets and the BBC which have some journalistic integrity. I also like Huffpost, but tend to avoid the extremes on both sides. For that reason I cannot take Breitbart with any degree of seriousness; its recent connections with Cambridge Analytica through Steve Bannon have only compounded this. When you say "On whether liberal values have been hijacked by communist ideology, just ask yourself which side opposes free speech by countering any reasonable argument with accusations of racism or oppression. Who surrounds (fortifies?) themselves with the oppressed in order to enact legislation that has the net effect of limiting personal freedom" I really don't know how serious you are, but I'll bite. First of all, please define a 'reasonable argument'. For me, I would say women wanting equal pay is a 'reasonable argument'. I would say that Americans of colour wanting the same access to education, health treatment and mortgage loans as Americans of European descent is a 'reasonable argument'. I would say that those campaigning for more stringent legislation around firearms in a country that has a problem with mass shootings is a 'reasonable argument'. If people fighting for these are considered 'liberals' then maybe it says more about those that oppose them. I'm also intrigued as to how you feel these arguments encroach on personal freedoms, just as I'm intrigued as to who you believe is applying communist ideology to centre/left-of-centre thinking.

PimpmasterJazz mikekazimer's article
Apr 17, 2018 at 9:37
Apr 17, 2018
Cycling Brands Under Scrutiny in Gun Control Debate
@Deuce-DeuceAndAHalf: I feel I would enjoy discussing free speech and "whether liberal values have been hijacked by communist ideology", but if you are telling me Breitbart is a good, unbiassed news source which presents a 'reasonable argument' then I really can't take anything you write seriously.
Load more...
14,514 views