TEAM-ROBOT sarahmoore's article
Jun 3, 2020 at 18:15
13 hours
Tech Briefing: Tools, Green Initiatives, Inexpensive Bikes & More - June 2020
It's about total toolbox weight for traveling mechanics who have to fly with their tools. It's a super niche product, but it's pretty cool for that niche.

TEAM-ROBOT jamessmurthwaite's article
May 20, 2020 at 7:55
May 20, 2020
Millyard's Hyper Ride Shock Returns
@gabriel-mission9: Also consider sprung vs. unsprung mass. When talking about the bike's suspension, there's a lot of unsprung mass and the ratio is lower. For the back of the bike you're looking at 3-4 kg of unsprung mass. When talking about the tire's unsprung mass, there's almost none to speak of. Only one small part of the tire is deforming, maybe 100 grams? So while it's true that it's an undamped spring, as a spring it has some other big upsides. It's in a uniquely good position to compress and then rebounding as the wheel passes over small bumps. Also, I wouldn't say tires are totally undamped. The difference in feel between a 2-ply downhill tire and a 1-ply trail tire can only be described as "damped." It goes thud thud instead of ping ping when you hit small bumps.

TEAM-ROBOT jamessmurthwaite's article
May 19, 2020 at 12:28
May 19, 2020
Millyard's Hyper Ride Shock Returns
Well said. That's almost certainly the reason for the high tire pressure. An Oleo shock won't even open up until high shaft forces hit it, and the tire would absorb impacts preventing the shock from participating until the tire bottoms out.

TEAM-ROBOT danielsapp's article
May 7, 2020 at 9:31
May 7, 2020
Kenda Releases New Pinner Tire Developed with Aaron Gwin
@jomacba: Sounds like you're hard on equipment! FWIW those RaceFace/Easton ARC rims are infamously soft and bendy. DT 471's and 511's are a whole 'nother animal compared to the ARC rims- much stronger, much stiffer, much more reliable.

TEAM-ROBOT danielsapp's article
May 5, 2020 at 15:28
May 5, 2020
Kenda Releases New Pinner Tire Developed with Aaron Gwin
Loic Bruni is simply running what works, which may or may not correlate with whatever shiny new MTB trend is being pushed. Based on the fact that (basically) no one on the circuit runs rims wider than 30mm or tires wider than 2.5", I would conclude that ultra-wide rims and tractor tires do not work for World Cup speeds and tracks.

TEAM-ROBOT jamessmurthwaite's article
May 5, 2020 at 13:43
May 5, 2020
Bike Check: Isak Leivsson's Homemade Steel Downhill Bike
@zyoungson: I get what you're saying about driving through the BB, and I understand that your feet are the main location on the bike where a rider transfers bodyweight to the wheels. But riding isn't so simple as transferring mass through a fixed point at the BB. Here's a thought experiment to illustrate my point: picture Greg Minnaar off the back on an old, short wheelbase bike and new Greg Minnaar centered on a new long-wheelbase bike. Which Greg's center of mass is farther behind the front contact patch? Neither. They're both going to end up with their center of mass in roughly the same place relative to the front contact patch because they both want to resist going over the bars and they both want to be in a centered/neutral position with their weight balanced between both contact patches. The benefit of the longer wheelbase is that, even though both riders have an even weight distribution between front and rear wheels, the rider on the longer wheel base is more stable. Bumps, compressions, and impacts shift his COM less relative to the two contact patches.

TEAM-ROBOT danielsapp's article
May 5, 2020 at 13:36
May 5, 2020
Kenda Releases New Pinner Tire Developed with Aaron Gwin
Those look like welds on the Intense front triangle in the last picture.
Load more... 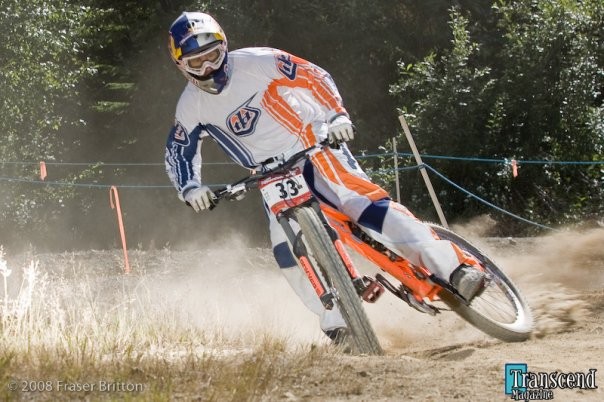