$2500 USD
Selling my Slash which has served me well for two seasons. I am selling this and my hardtail to reduce the fleet size down to one bike. This bike has not been ridden since being completely overhauled by Unreal Bike Shop in Central Point. Both shocks were professionally serviced by Fox while the rest of the bike received a full tune-up. This is a high-end build that is in good condition. The bike will dominate any downhill trails you throw it at and is a great climber. I have climbed Mt. Ashland to Bull Gap many times on this bike and minimal extra effort is worth the descent. Frame: 2012 Trek Slash 9 XL Fork: Fox Float RLC 36 (36mm stanchions, 160mm travel, rebound and low-speed compression adjustment, lockout, 20mm through axle). Couple of dings at the top of one stanchion. Never caused any problems Shock: Fox DRCV. Suspension: Last season, the linkage bearings were completely replaced with Enduro sealed ball bearings and the upper shock pivot was replaced with a RWC needle bearing kit to reduce suspension stiction even further. Wheels: Easton Haven 26" Drivetrain: Shimano XTR rear derailleur with clutch XT cassette 11-36 XT crank XTR shifter Raceface Atlas 30T narrow-wide chainring MRP AMG chainguide (with this setup I FINALLY eliminated dropped chains forever. I plan to use the same setup on my next build) Raceface bottom bracket Brakes: XTR Seatpost: Rockshox Reverb Stealth Handlebar: Easton Haven Grips: ODI

Treehugger84 mikelevy's article
Aug 1, 2013 at 8:03
Aug 1, 2013
Race Face Narrow Wide Chainring - Review
For sure the 30T will be added to my drivetrain portfolio. Just got back from a trip to Sun Valley where my 32T and 11-34 cassette just wasn't quite small enough.... Couple that with a 36 when I convert to 10 speed and I'll be able to climb anything. Down with the front derailleur! 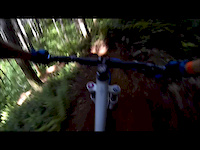 Great vid Austin. You guys shred for sure

Treehugger84 karl-burkat's article
Jun 6, 2013 at 12:58
Jun 6, 2013
MUST WATCH: Gee Atherton Gets Hunted by a Falcon
Reminds me of the time a crow started attacking my head with his talons while I was riding my bike to class for no apparent reason. There's no doubt in my mind that bird was a seasoned veteran.

It's been a dream of mine for a while to ride through a Redwood grove. May have to make a trip down to SC and do some secret trail detective work...