stormrider99 WhistlerMountainBikePark's article
Jun 27, 2020 at 0:06
Jun 27, 2020
Whistler Mountain Bike Park Report: The Know Before You Go Guide to Opening Day
People, empty lines will show them that treating locals like morons won't be tolerated. Full pop for an unknown season is rediculous. I want to ride but they are not even promising a full bike park. Seasons pass ... Ya right if something happens and they close your $ are gone. Just like ski season... Screw you Vail Resorts...

stormrider99 urteam's article
Nov 8, 2019 at 11:25
Nov 8, 2019
Polygon UR Team Aims to Reduce Their CO2 Output for the 2020 Season
Start with the BIG countries that use coal, and maybe just maybe things will start to get better. Try looking at this as a good overview/graphic... https://www.carbonbrief.org/mapped-worlds-coal-power-plants **Heat map on China/India is pretty alarming...especially net-new plants coming online soon or planned. People focus on a per-person footprint, which only tells a portion of the story and makes some Western countries look brutal due to lower populations. China also funds a massive build in net-new coal factories around the world not to mention their own...nobody talks about that (yes they are doing a few "green" projects as well). Hey Greta and minions, go there and visit those governments actually stealing your future... We can obviously all live cleaner...like Polygon...trying...but putting the bulk of the burden on the Western World isn't going to solve "climate change". AND if your are a true believer that humans are causing things then the ONLY solution is, LESS HUMANS which is NOT going to happen so we are realistically doomed as population is not going to slow down (7.5+B now and in just the next 30 years projected to be almost +/- 10 BILLION) Paper straws and electric cars, ya that is the answer...oh and planting trees because if you get rid of all the fossil fuels that we use to cook and heat homes there won't be any trees around because people would cut them all down to eat and stay warm. Could go on and on...tackle the BIG overpopulated countries, that will be the biggest impact.

stormrider99 mikelevy's article
May 22, 2019 at 13:04
May 22, 2019
Review: Spank's Foam-Filled Spike 350 Vibrocore Wheelset
Ride em before you bash em...its not a gimmick Short answer: Yes Just like their Vibrocore bars - kick ass over carbon, do they make a difference: YES **I ditched my Renthal setup for Vibrocore and they are waaaaay better

stormrider99 jamessmurthwaite's article
Jan 4, 2019 at 0:36
Jan 4, 2019
Lawsuit Claims Search & Rescue Delays Contributed to Mountain Biker's Death
Download TRAILFORKS app..there is an "emergency" section in the menu (lat/long plus auto dial 911)..AND there is a "share your location" feature...puts you right on a map. Basically you can provide a friend or emergency personnel the information that they need to save your ass!! ...If you can make a phone call, you can use this to help them get to you faster. Oh and it has trails on it :) https://www.trailforks.com/apps/map/%20target=

stormrider99 pinkbikeaudience's article
Nov 16, 2017 at 14:24
Nov 16, 2017
Truvativ Announces New Descendant 35mm Handlebars, Stem
35 is bogus...had Renthal & Easton 35 Carbon, RF Alu 35...all too stiff. Went to Spank Vibro on DH & Enduro, noticed immediatly they were way better on the body. I'm done with Carbon bars for sure & 35mm. People always say "oh carbon dampens" ... ya well 35mm is still stiff as shit and beats you down. I would say that the Spank setup I just installed has better dampening than Carbon AND doesn't throttle my upper body. I am only 165lbs maybe that is why these 35mm feel so bad. 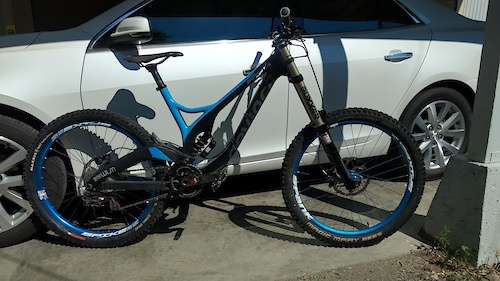