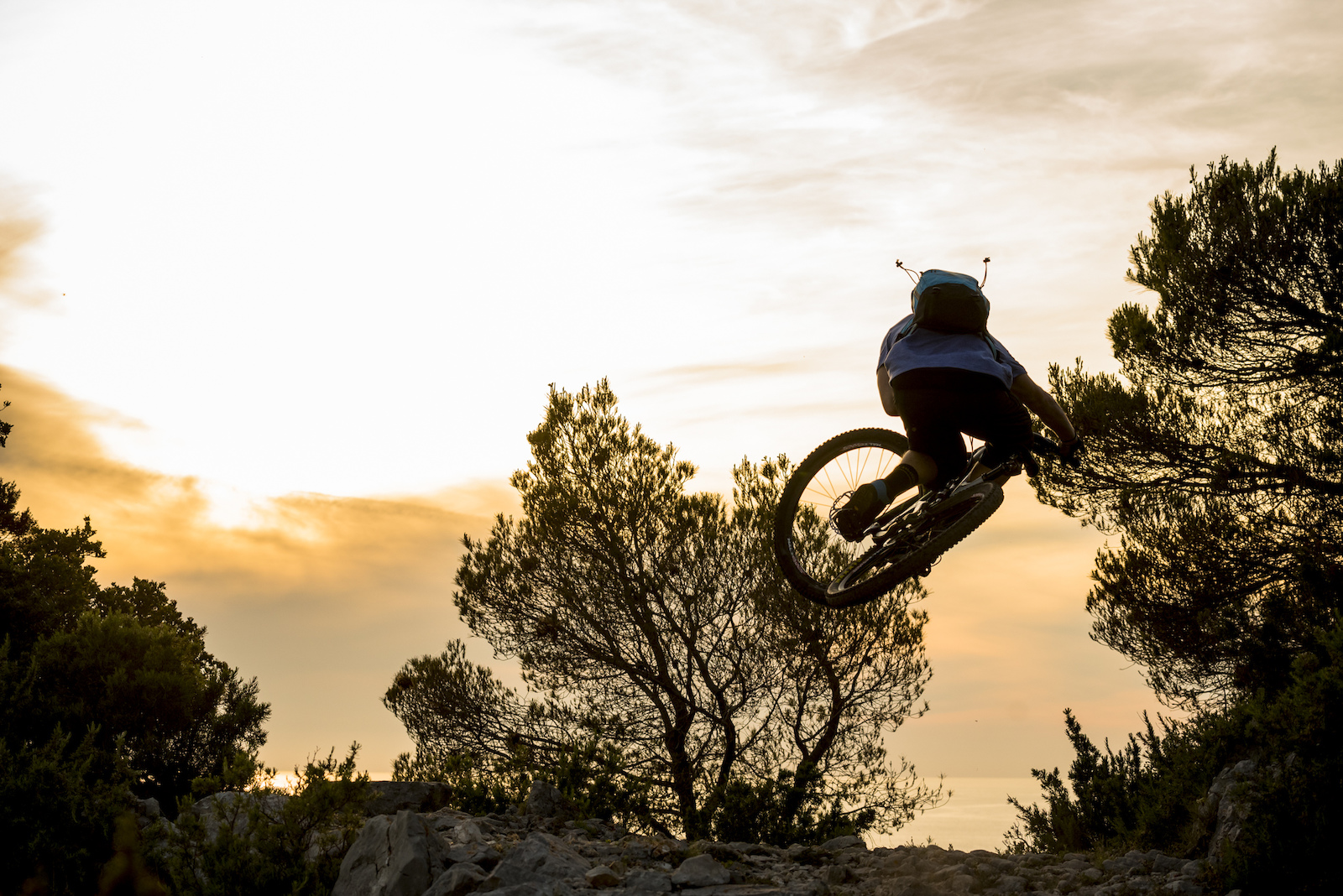 Adventure: For some it means a ten-hour slog up a Peruvian mountain with only damp gloves to chew for nourishment, for others it means simply ignoring rain plastered windows to grab a bike and head outside for a local spin whatever the soaking that lies ahead. Whatever its interpretation, the word ‘adventure’ is emotional, alluring and thought provoking.

I’m lucky to make a living out of adventure. I’d say I make a living out of 'photographing adventure', but that’s only half the story. To photograph it you have to do it. You have to be there, in the moment, living its ups and downs, reaping its rewards and swallowing its bitter pills. And then there’s the planning, the research, the travel to and from, the pre-trip excitement, the post trip exhaustion. A one-week adventure can easily become a month of a photographer’s time.

So to shed some light on this enviable job of mine I thought I'd share some of the escapades and places that punctuated my 2016 diary as a photographer, and give a glimpse of how these adventures come to be.

South Dalmatian Islands, Croatia, April 2016.
“Come sailing around some islands and we’ll ride amazing singletrack,” was the sales pitch. The reality was more like “come sailing, we’ll have a ruddy good time and plenty of adventure to boot”. It turned out the trails across Croatia’s southern islands are not as well established as we’d hoped, but whatever, riding natural trails, with all their twitch-response peculiarities has its good times.

Adventure is all about grasping the unknowns that lie ahead —from fork- pounding rock gardens to impromptu wheel-off- the-ground opportunities— and squeezing every ounce of riding enjoyment from them, as fellow boat-dwellers Blake Samson, Olly Wilkins, and James Brickell well know. The key to making trips like this work is having the right crew along — riders who stay positive whatever is thrown their way. 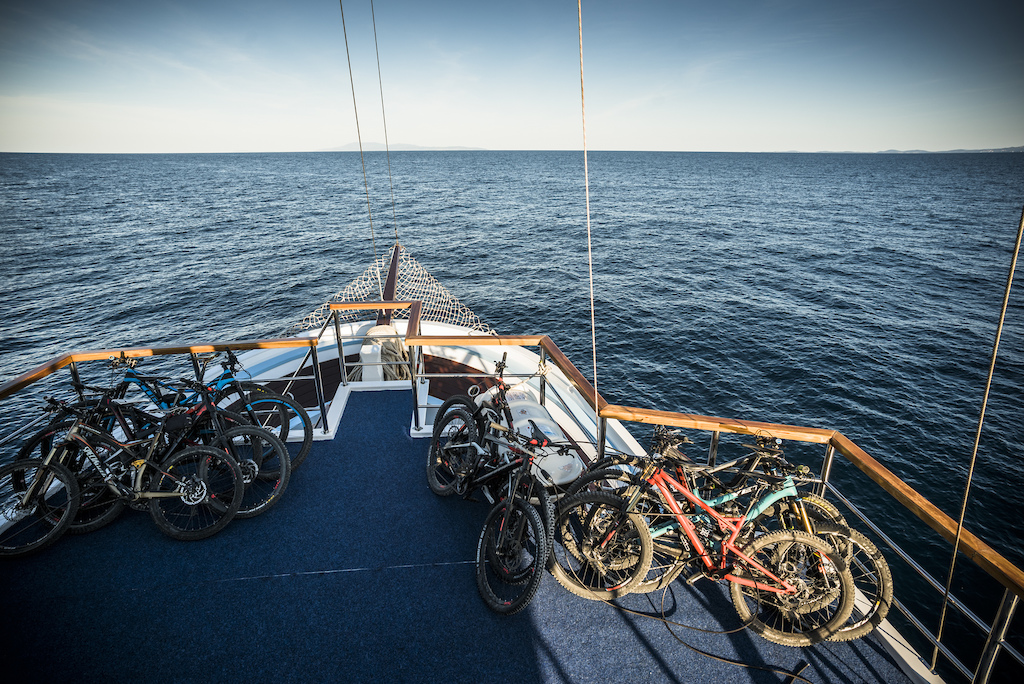 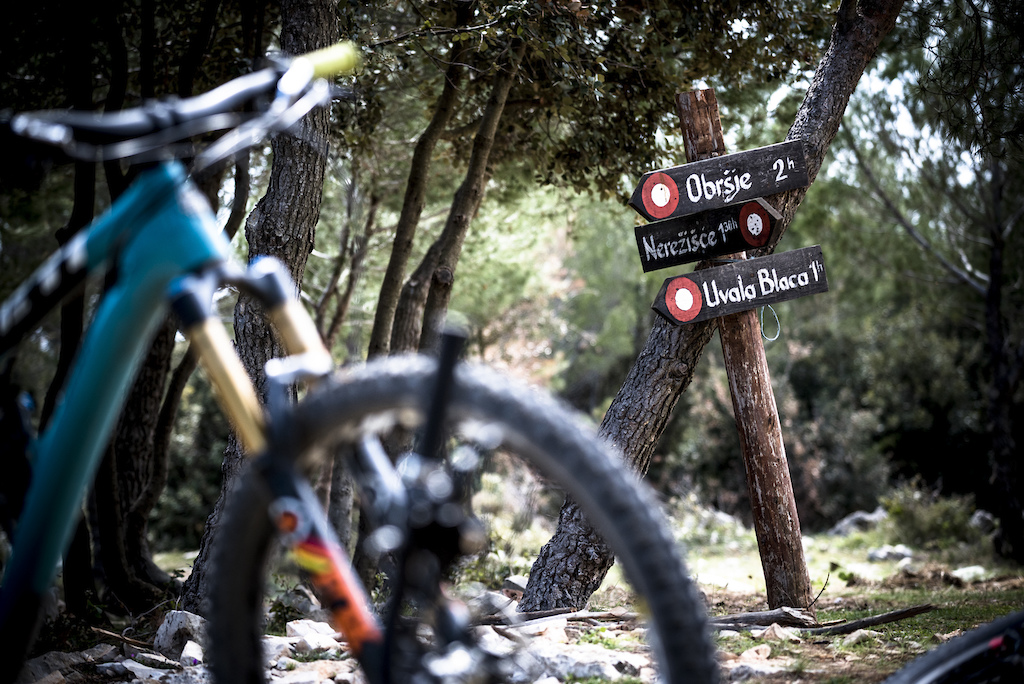 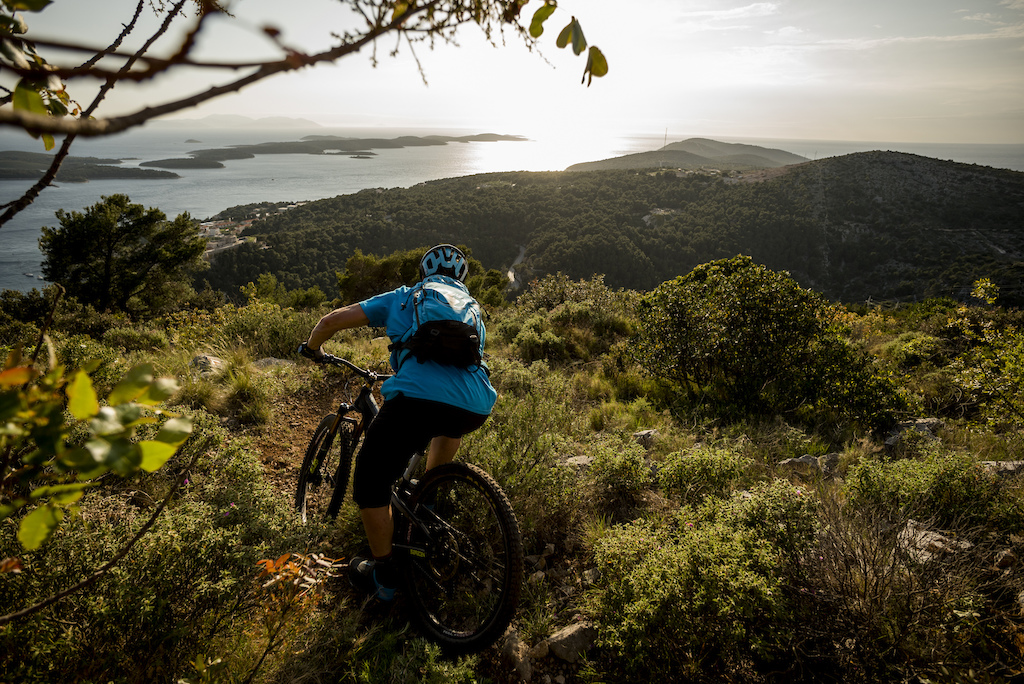 Adventures are about heading into the unknown - even that unknown only lasts until you reach the 30m yacht that's waiting below. The last descent above Hvar and another first for us riders.

Ligurian Alps, April 2016
Product photoshoots and adventure are very different bedfellows but they are not necessarily mutually exclusive either, especially if you base them out of a refuge. The brief I was given for Trek’s Powerfly e-MTB shoot with Tracy Moseley and James Richards said ‘adventure’, so that’s what I gave them — staying in an Italian refuge for three days and seeing how far we could push the bikes on the challenging and exposed trails in the Ligurian Alps right outside.

Okay, we’re not talking a wild expedition through an uninhabited corner of the globe, but adventure comes in fifty shades. Hauling 23 Kg bikes across snowy couloirs and thrashing them along the narrow ledges that double as trails here sat somewhere on the spectrum between ‘adventure’ and ‘ambitious’. 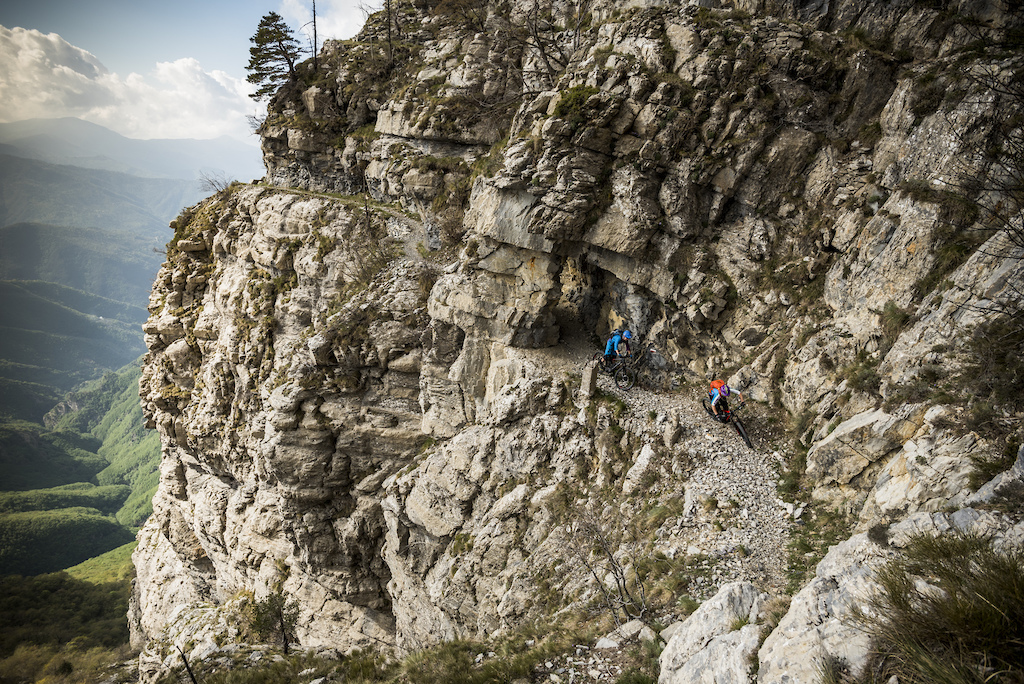 The Alpine variant on the Alta Via dei Monte Liguria trail. Not for the feint hearted. 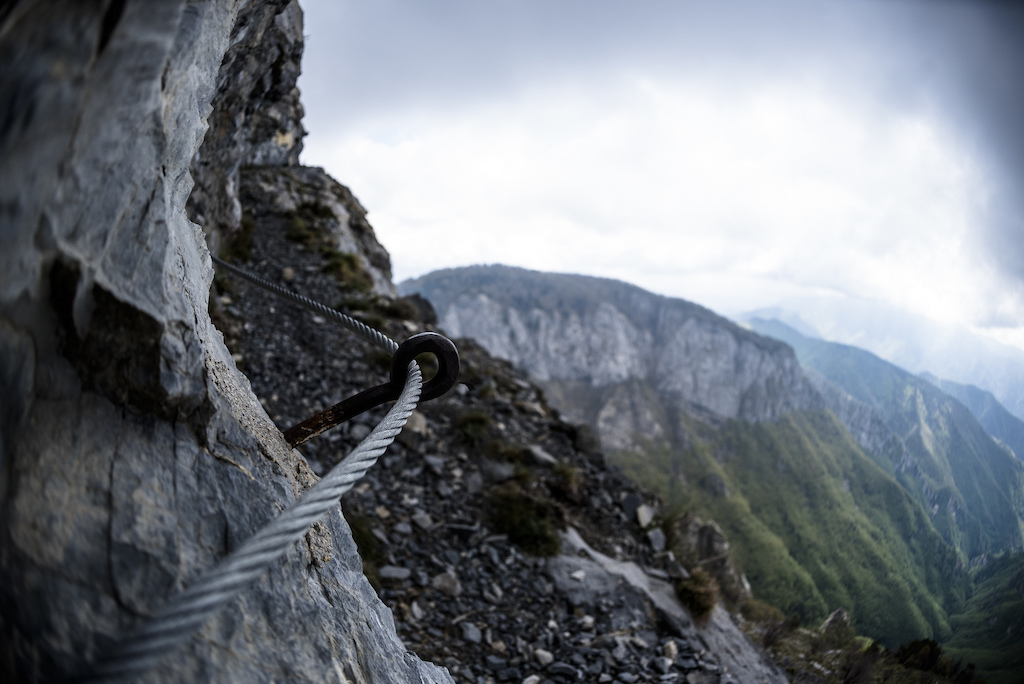 Half trail, half via ferrata, full adventure. 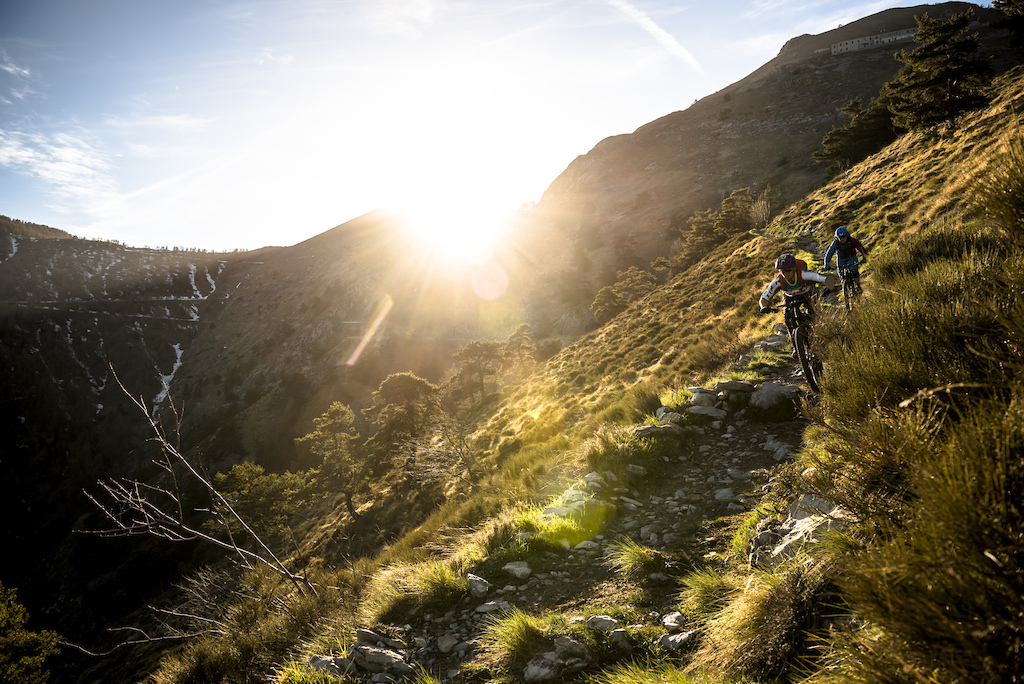 Sign up for an adventure and you're signing up for a unique experience, whatever bike you're on.

Are, Sweden July 2016
It’s easy to go somewhere new and just lap the bike park, especially if you’re a photographer and that place has a four-hour long sunset. Are in Sweden is one such place, and somewhere I’d always wanted to ride. Arriving to coincide with their energetic and beer-fuelled bike festival was all well and good, but mercenary as I am, shooting hours of =sunsets doesn’t make for a story, (well, not a very long one) that pays the mortgage.

So with the help of the good fellows at Sweet Protection, we roped in an overnight stay in a hut perched on a mountainside on the Sweden-Norway border. I teamed up with riders Baard Stokke and Stina Bondehagen at the festival and suddenly a simple two-day adventure, riding into new terrain and leaving the hectic pace of life behind, was born. Simple is usually best. 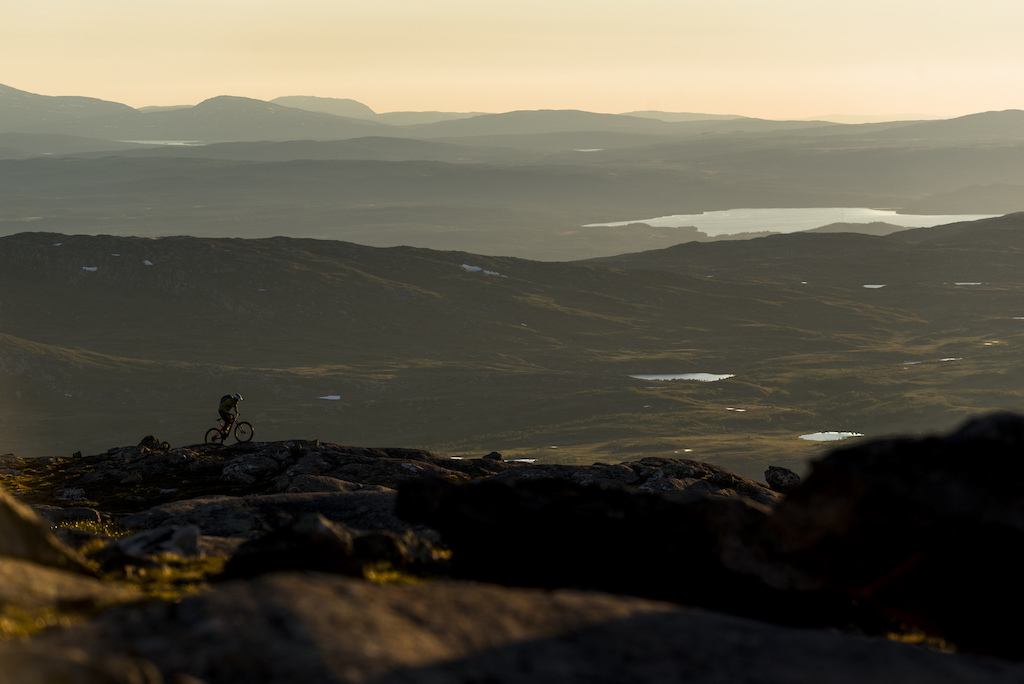 For Baard, 11 pm seems like a good time to ride Are's trails in the summer. 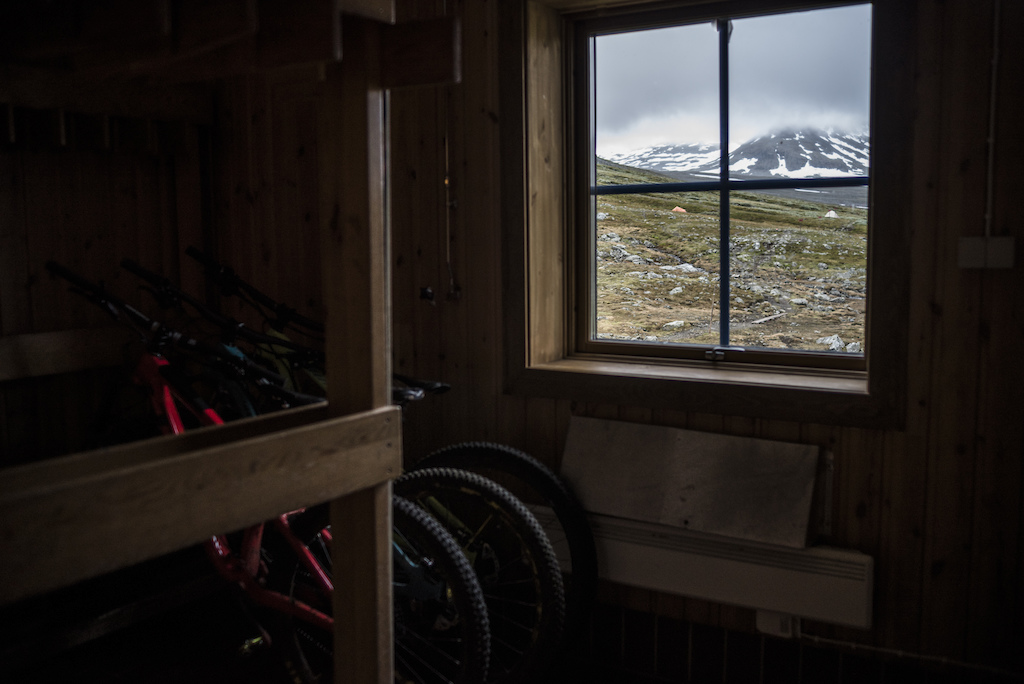 There be dragons, or at least wolves - overnight'ing in the Sylarna hut in some very wild surroundings. 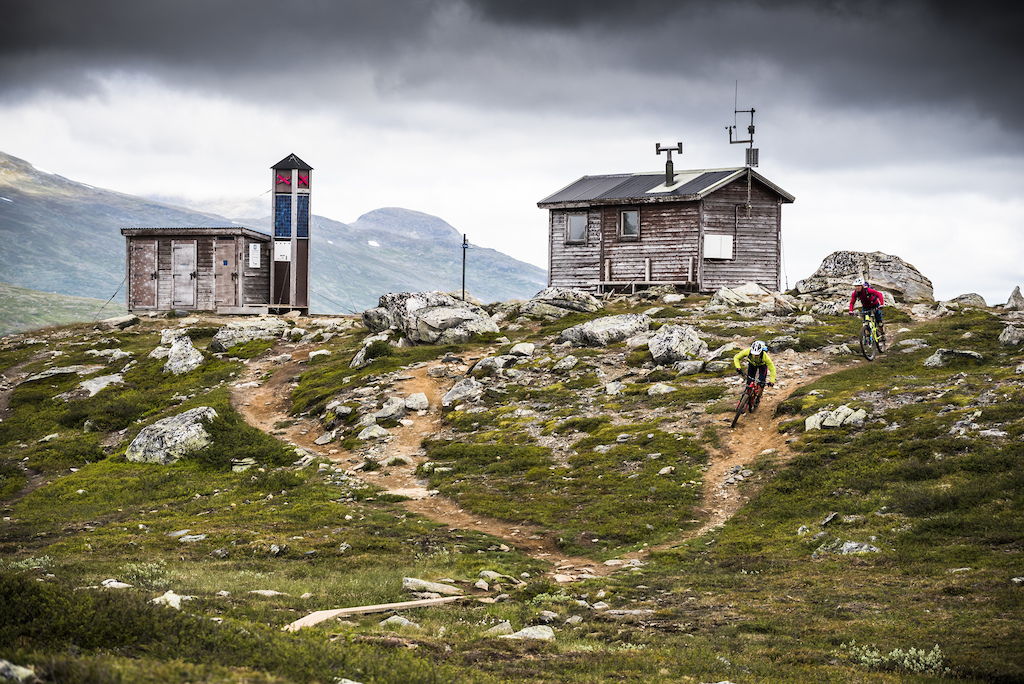 The halfway point on the ride out to the Sylarna hut, and three hours from the nearest cell phone signal.

Gran Paradiso National Park, Italy, August 2016
Adventurers probably make a good revenue stream for therapists. Their masochist tendencies combined with a twisted perception of what makes for a good day out should be questioned by mental health professionals. But then they should also be marvelled at: It’s these ingredients that drive adventure. After all, when you’re offered a few days of shuttling Aosta’s perfect singletrack why go and ruin it by insisting on climbing 2000 meters to stay in a cold, basic mountaineering bivouac?

I’m still asking myself the same questions about my three-day August adventure with Aosta valley Freeride, but then I remember the solitude, the incredible feeling of accomplishment and the laughs I shared with the other two riders that were fool enough to come with me, Massimo Ferro and James Brickell. 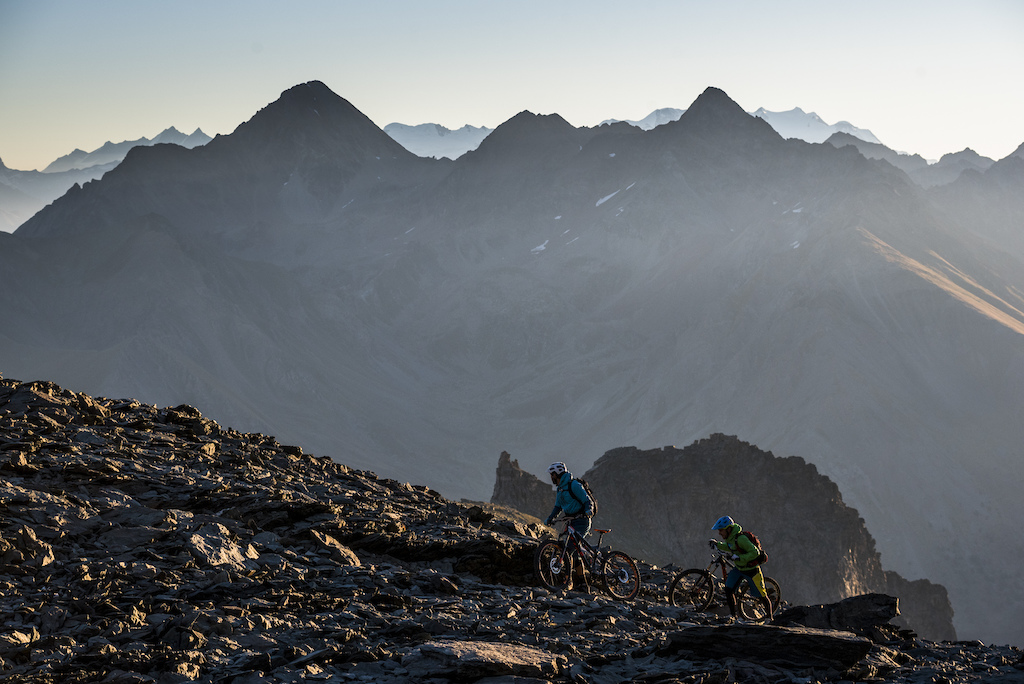 The last push up to the Gratton bivouac would warrant applause if there were anyone else about to see it. 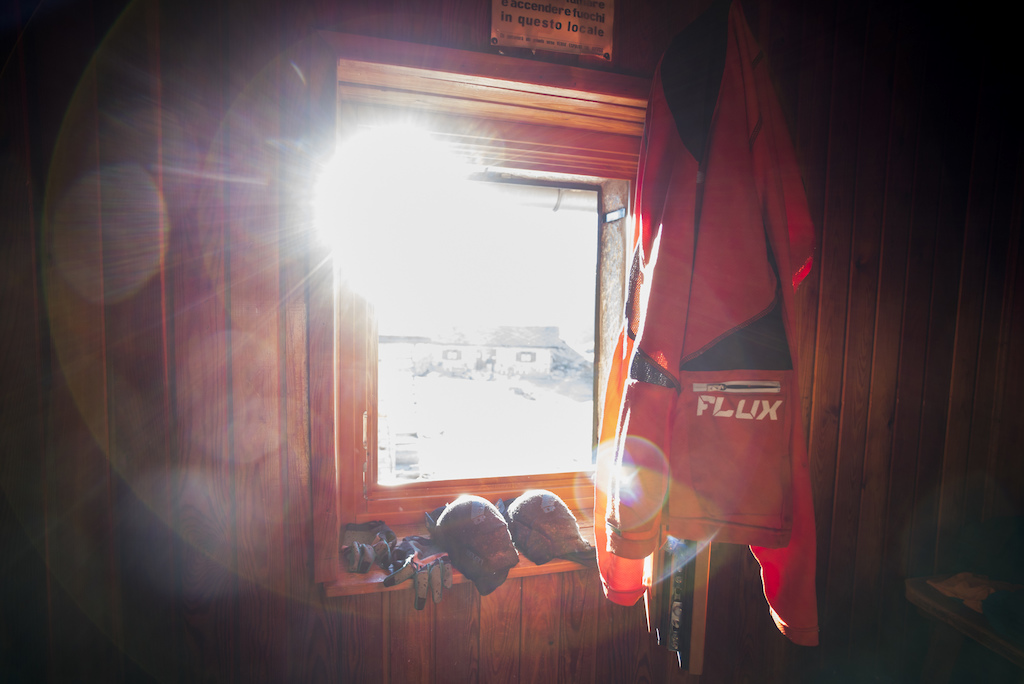 Gear drying time at the refuge Vittorio Sella on night one. 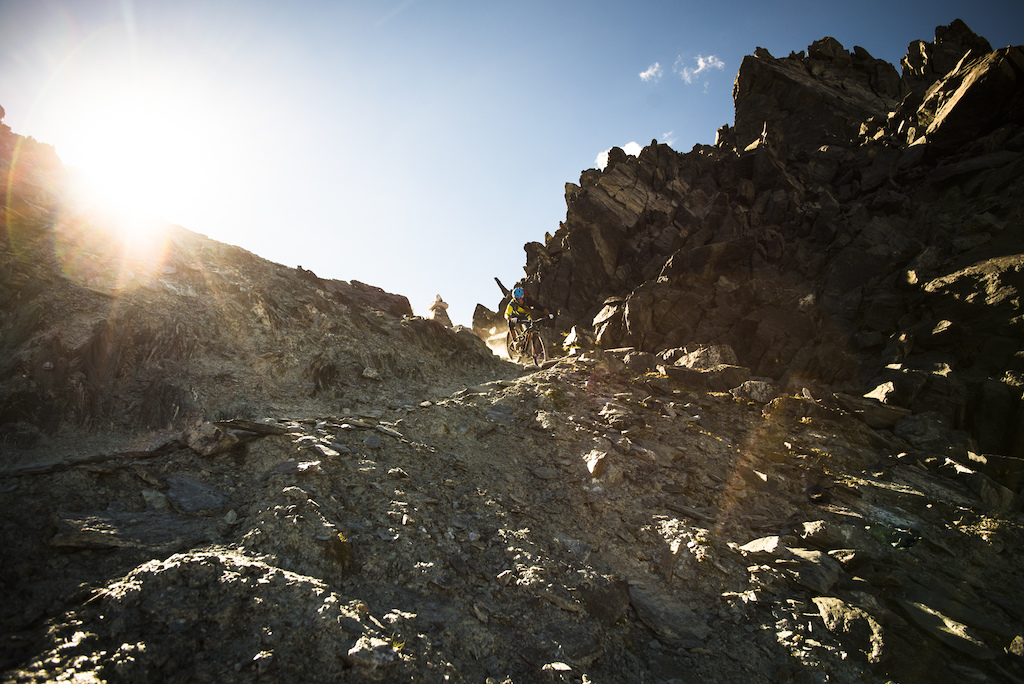 The rough with the smooth: James rolls in from the 3200m high Col de Lasson, after 1600 m of climbing. 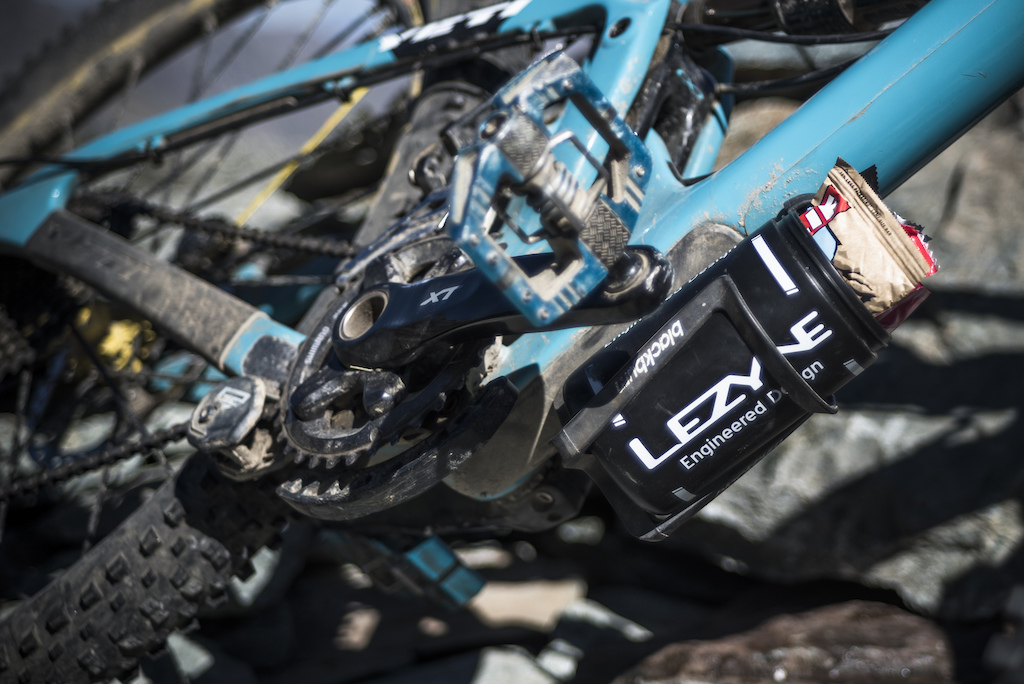 Getting creative: Hauling enough Clif bars for a 3-day adventure is key to survival.

Sierra de Guadarrama, Spain, October 2016
London got an Olympic XC course lapping a muddy field a stone’s throw from the Metropolitan line and a canal full of shopping trolleys. Madrid gets real mountains, dusty trails, and thousand-meter descents. If you ever think you’re born in the wrong city, then ride the mountains just outside Spain’s capital and your doubts will be confirmed.

In October I handed my usual job as trip organiser-and-logistics-guy to local guiding outfit BlackTownTrails for a four-day adventure with old friend Holger Meyer, crisscrossing the Sierra de Guadarrama mountains. We found some of the best riding Europe has to offer, and all of it only an hour from a sprawling capital city. At the heart of our four days was an overnight bivvi bags, laid out among the rocks on top of a peak. After all, if you want to drop into a descent at sunrise it sure beats a 3 am start to ride up in the dark. 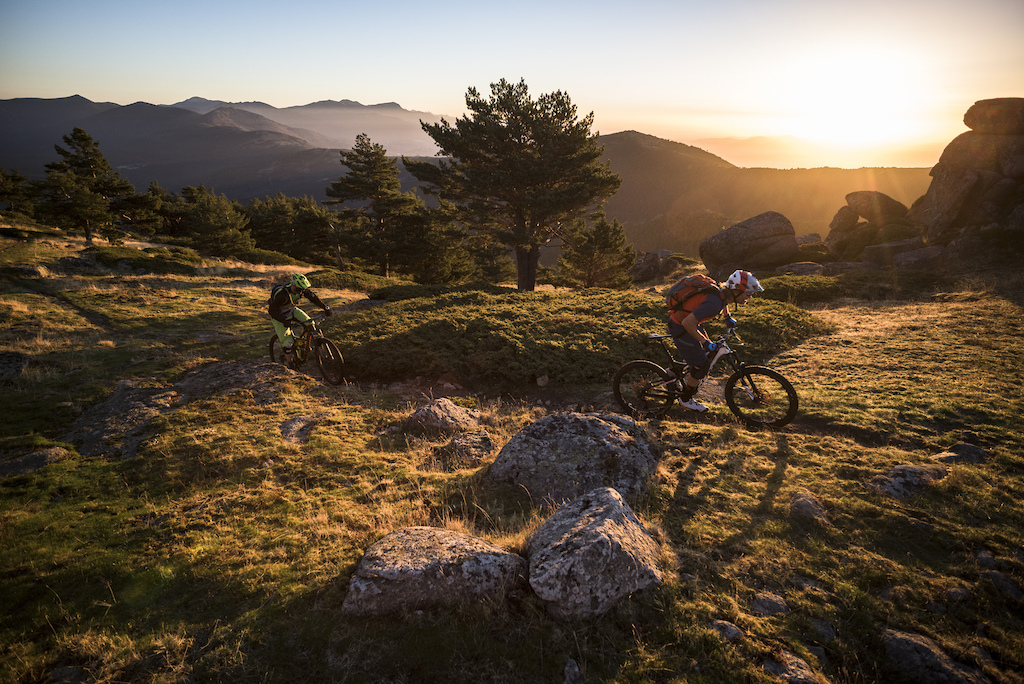 An overnight bivvi means being able to ride at sunrise without having to get up too early. 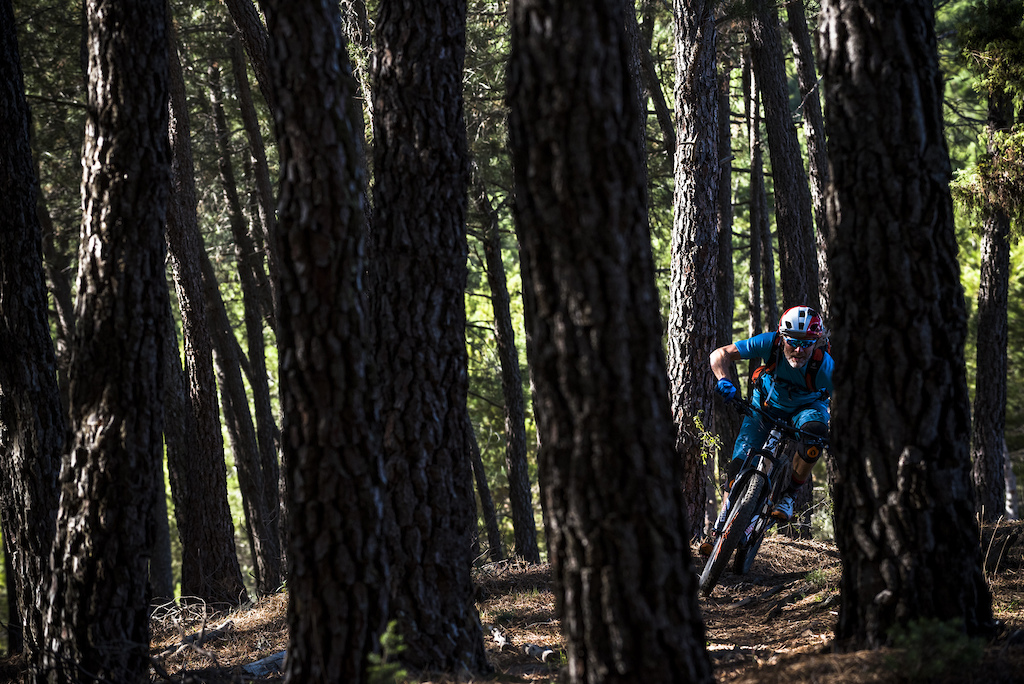 Holger knows how to get the most from an adventure - ride fast, eat well and dodge the trees.

Lebanon, October 2016
While I grew up, the country of Lebanon was synonymous with war and hostage taking and people chained to radiators, but that was back in an era of VHS tapes and cars without power steering. Things change. Okay, riding only 70 Km from Syria might not seem like everyone’s cup of tea, but as anyone with a finger on the pulse of real adventure travel knows, conflicts are very often very localised. Realising that Lebanon has had peace for a while now and discovering it has a long-distance trekking path that could form a great basis for a story, I persuaded Tibor Simai and Kamil Tatarkovic to come with me for one heck of an adventure.

I’ll be honest and say that finding riders willing to come on this trip proved more of a challenge than the trip itself. On the ground we found peace, friendship an amazing seven days of trail riding full of surprises and rewards. Hey, if you don’t go, you’ll never know. 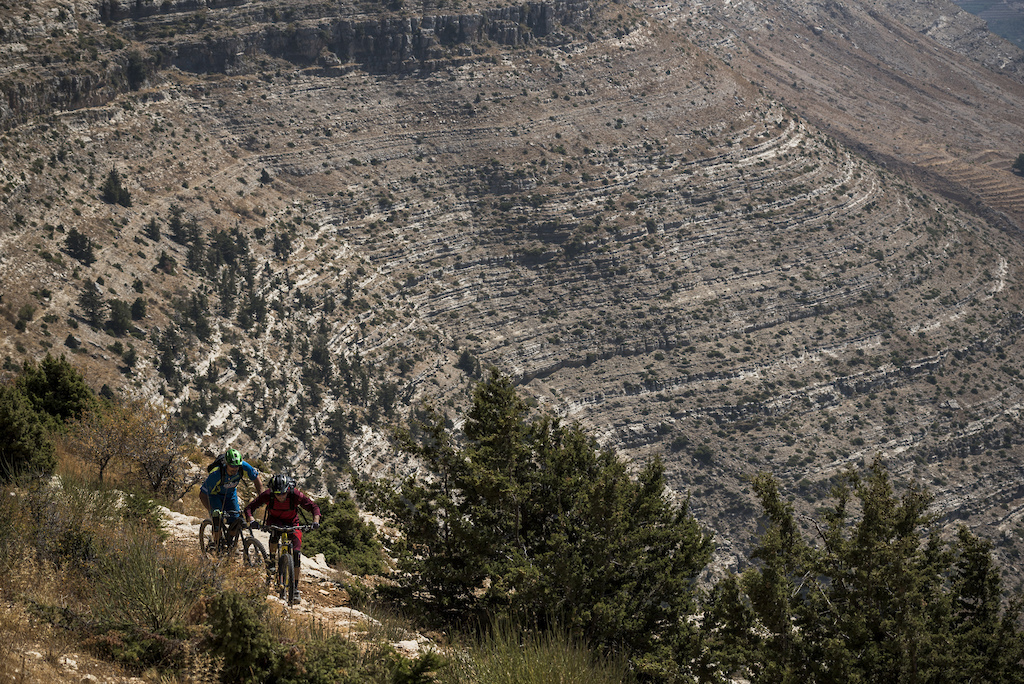 High above the village of Ehden on day one of seven along the Lebanon Mountain Trail. 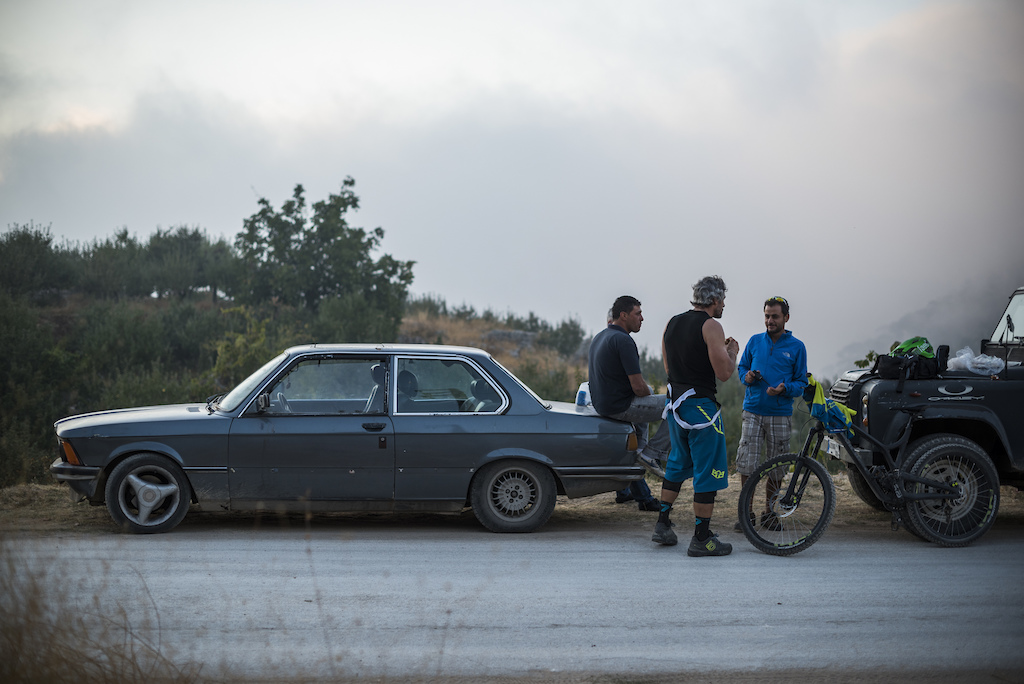 It's all about the hubcaps: In a country known for war, matching wheelsets have little importance, but greeting bike-riding strangers that roll out of a trail for a chat is a must-do.
Follow the next adventures on Instagram and Twitter @danmilnerphoto

fattyheadshok (Jan 18, 2017 at 19:10)
Seriously? That's how you get to pay your mortgage?? You unbelievably lucky bastard! Great photos and props to you for living the dream.

spinto21 (Jan 19, 2017 at 8:27)
Hey PB, how about adding a list of guided outfitters to your Trailforks app for different destinations?

DanMilner (Jan 22, 2017 at 5:22)
ha ha, yeah they are eh! Bottle cages aren't usually my thing, but they come in useful on a 3 day ride up to 3500m. I wanted to shed some of my kit's weight onto the bike -which is where bottle cages (and Lezyne bottle caddies) come in, even just to carry Clif bars or tools, or hey, who'd have thought of it, even water. 6 Clif bars is nearly half a kilo off your back.
Below threshold threads are hidden