Join Pinkbike  Login
For me mountain biking has become an obsession, an adventure and a way of life. A big part of that adventure is the people that I meet along the way. Working for the Camp of Champions has brought a lot of people into my biking circle; that is how I met Ron and Jackson Goldstone. Ron introduced himself to me during Crankworx 2011 and asked if it would be possible for Jackson to visit the COC Compound to use the airbag. Ron and I stayed in touch over the winter and during camp 2012 Jackson, Ron and the rest of the family visited several times a week. 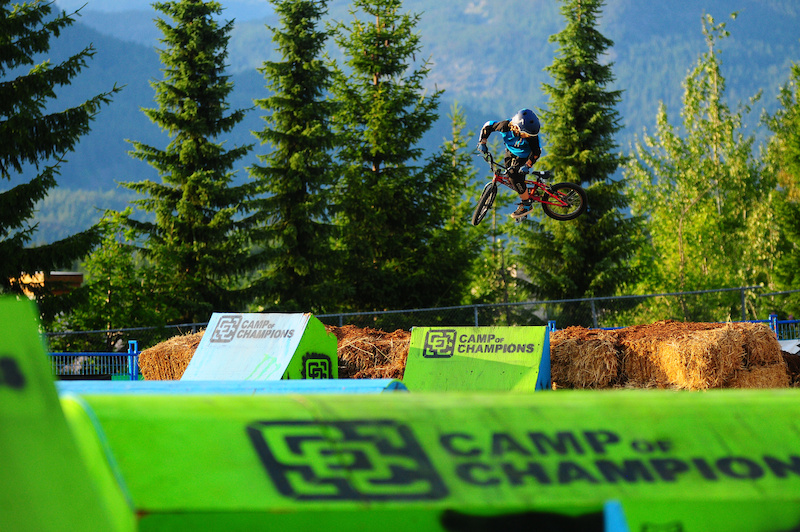 The Goldstone family has made biking part of their everyday life and it was great to be around a family who is so involved in biking. The whole family races BMX, Jackson and his sister Bailey attend the DFX Daily Kids Bike programs, they go to Woodward for family vacations, the whole family has been bitten by the same bug that has sunk its teeth into so many of the people in my life. 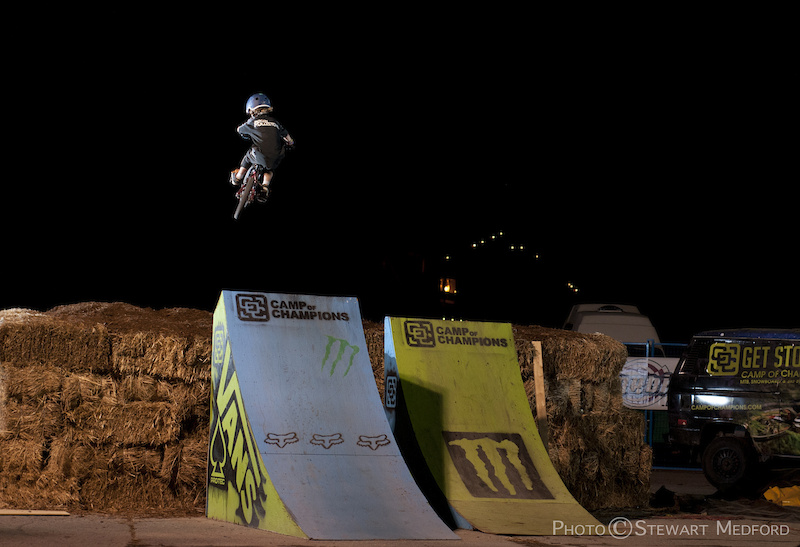 Jackson taking part in a Camp of Champions night shoot.

I had the chance to ride with Ron and Jackson this summer and it was amazing. I followed Jackson down, A-Line, Freight Train, Dirt Merchant and several of the more advanced trails at the Whistler Bike Park. Seeing 8 year old Jackson pedaling hard into a good sized jump (like the big creek gap on Dirt Merchant) and taking flight would make me nervous every time.

Here is a video following Jackson and Ron down Dirt Merchant:

While riding down A-Line Ron had a GoPRO pointed back at Jackson and was braking to make sure Jackson was in his shot. Following from behind several times I heard Jackson yelling at his dad to go faster. It was great to follow behind and watch Jackson whipping, tabling and doing no footers off every other jump.

I am a firm believer that anyone can influence someone else to ride. And Jackson and his whole family make me want to ride more. 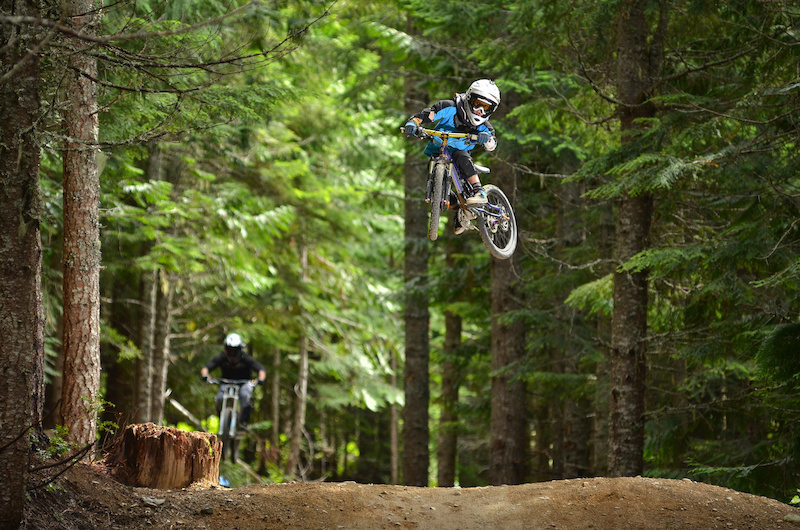 Boosting one of the jumps on A-Line.

Photographs from Camp of Champions' compound taken by Stewart Medford.

JBinKC (Sep 5, 2012 at 18:53)
Sorry Pinkbike, but you gotta give him more credit than to say his location is what makes him a great rider. I'm pretty sure not every 8 year old in Whistler shreds this hard!

home-team (Sep 5, 2012 at 19:00)
there are a lot of factors that come into it for sure, natural talent, location and family, I think it is the family aspect that plays a huge role in what Jackson is doing. with out a family involved in the sport he would not be progressing as fast as he is. that being said with out the bike park he would not be progressing as fast ... it is hard to say what makes a great rider ...

My son just turned 7 last week and loves riding his bike, but I find it's a fine line between encouraging him to try stuff I know he can take on, and letting him go at his own pace. If you push too hard, even in an encouraging, positive way, they will push back if they are not confident, and if they crash then everyone feels bad and it can lead to resentment, fear, or not wanting to ride.

My parents were never keen on riding, and I want to instil my love of mountain biking in my son, but he has to develop this love himself, so I see my job as making it as easy as possible

paulwatt (Sep 5, 2012 at 21:09)
Just rode a huge descent with a friend's just 10 year old. He was dropping the biggest rock drops and charging the whole way. He also had 40 days in the Whistler park this summer so far. He was keeping up with the 30 something group no problem. Until next year when he embarrasses us all. Pretty cool

With this much experience at such a low age, even if he continues to just train "casually" while balancing other factors like school, etc, he'll still probably become a top 20 rider, easy.

I remember my parents never taught me or anyone for that matter how to ride a bike. One day after seeing my friends ride their bikes I hopped onto some random bike sitting in the garage and literally just started riding...but that was when I was like 6-7 yrs old. This kid already is take jumps and handling some decent trails already while back then, I didn't even know places like this existed.

Definitely a huge advantage living close to Whistler, that critical exposure at a young age is key for any rider who wants to make it big.

home-team (Sep 6, 2012 at 11:49)
so true, the great thing about Jackson is that to him he is just a normal kid, he rides bikes because he likes to ride bikes, not because his parents are pushing him into it. Jackson might actually be pushing his parents into riding ... ha ha ha. It is great to be around the family and I hope I can watch Jackson and his sister improve over the future.

doorknob100 (Sep 7, 2012 at 0:44)
My friend and I were DJing for the first time at the CoC airbag and Jackson was there. We asked him how to back flip and if he could give us any tips. He had to think about it for a minute and then he just decided to show us. We didn't learn how to backflip but we did see Jackson throw down about three or four backflips. It came so naturally to him that he struggled to articulate it to us so yeah I think he has a load of talent to go along with living at Whistler.

Spicy-Mike (Sep 7, 2012 at 10:11)
lmao thats nuts. That's when you know someone is going to be big in that field/subject; when you can ask them something and they do it on command, especially when they are 8-yrs old.

LindLTaylor (Sep 5, 2012 at 17:07)
He's already got a leg up on Messere, it seems. With all this riding in places like Whistler, this kid's gonna have consistency like a boss.

jackhennigan (Sep 5, 2012 at 20:03)
Here is another 8 year old from Calgary. Shreds equal hard and is a super awesome dude who even attends trail days.

thelumberjack (Sep 6, 2012 at 3:39)
On the contrary I fully get behind parents who kit their kids out sensibly so they can push the boundaries of their riding abilities like Jackson and this dude - being 8 doesn't mean you can't get a hyper-compression injury which at such a young age with relatively soft bones and an frail bodily structure this could be far more serious than the equivalent injury for a fit twenty something - these kind of kids are in far more need of leatt's than anyone else - oh and obviously EVERYONE should wear them in my opinion if they ride any kind of riding which dictates a full face - its just common sense, you won't think you need one until you make a mistake on an easy section of trail and wake up in hospital being told you'll never walk again! DH bike £5000 - life saving toilet seat £300 its easy maths isn't it?

rant over nothing personal guys just my view!

NAPALMJEFF (Sep 5, 2012 at 22:26)
yup done it took my kids up and down the country to skateboarding events HELL OF A GOOD TIME. and remember most of all enjoy yourself. oh and then i had to back off i was cramping their style.now i watch them on video.

socalshreder (Sep 6, 2012 at 12:10)
I learned to ride a bike at age 4, started dirt jumping on my BMX bike at age 7. I dont know Im kinda impressed lol. I guess for an 8 year old its imprressive that he knows how to flow through a trail.

Corrosive-Lizard (Sep 5, 2012 at 17:20)
So unbeleivingly amazing, this kid has supreme skills for his age, sponsor this kid now!

coryzzz (Sep 5, 2012 at 18:16)
i should submit my video of me following him at crankworx he was boosting huge on aline

sirbikealot (Sep 5, 2012 at 19:28)
This little shredder is a super chill kid, its been great getting to know him and his dad over the past year or two

MrAnderson6 (Sep 5, 2012 at 22:02)
i may as well retire, this kid is just going to drill me into the ground, take every podium and my girlfriend

I smell a legend in the future !

flatlandwizard (Sep 6, 2012 at 8:59)
anyone know his bike setup? got a 7 year old and would like to build him a quality ride, any help muchly appreciated!

home-team (Sep 6, 2012 at 11:20)
i don't think i have ever been so nervous following someone, i will have to find the footage of him jumping onto and off of the freight train container, my heart stopped a bit following him onto it.

irlenborna (Sep 6, 2012 at 14:18)
Dang whistler has got some young shredders! Love this sport, No matter what age you are we all will ride with each other

dv8416 (Sep 5, 2012 at 17:49)
You sacrifice other things to do what you love. I rather skip a night of drinking and dinner to spend the day riding and buying new shiny bits

goober6801 (Sep 5, 2012 at 17:58)
It's not about money, its call passion and spending quality time with the family and interaction with your child. Not the bar!!! I aplaud his parents, wish there were more like them in the world.